"Never Give Up, Never Despair" The Royal Family Lead The Nation For VE Day 75

At the beginning of the year, preparations were being finalised to mark the 75th anniversary of Victory in Europe Day in true British spirit. From street parties and marches to the Royal family gathering on the balcony of Buckingham Palace with thousands joining a procession down the Mall. The current situation meant speedy changes to the plans. We will come together again to mark future anniversaries, until then we are finding new ways to commemorate, honour and remember. As we globally fight a silent enemy, today is particularly poignant. On Wednesday morning, the Duke and Duchess of Cambridge spoke to veterans and staff at Mais House care home. The footage was shared on tonight's BBC coverage just ahead of the Queen's historic speech. 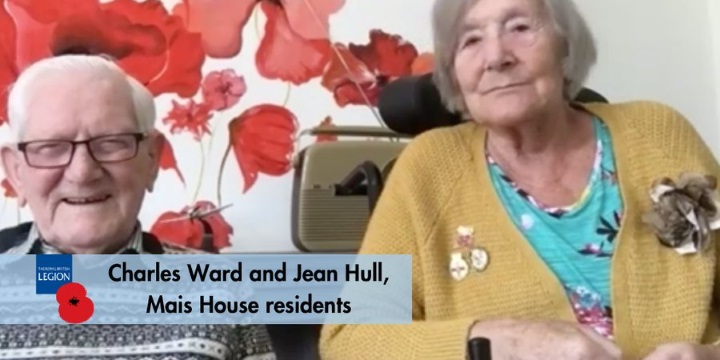 'The Duke and Duchess of Cambridge were left tickled pink by stories of Churchill's "secret" birthday message to his son when they chatted to Second World War veterans about their VE Day memories. Champagne was flowing when William and Kate made a video call on Wednesday to residents of an East Sussex care home to listen to them reminisce about the day the war ended in Europe on May 8, 1945.

William praised the efforts of the wartime generation, and told them: "Because we can't be together, everyone's still thinking of you all today, and are very proud of everything you've all achieved."

Kate also revealed Prince George and Princess Charlotte have been asked by their teachers to learn Dame Vera Lynn's famous wartime anthem. She said: "The school has set all the children a challenge and they're currently trying to learn the lyrics to the song We'll Meet Again... so it's been really lovely having that playing every day."


Speaking about her paternal grandmother Valerie Glassborow's work as a code-breaker at Bletchley Park, Kate said: "It's so sad that she's not here today, as I would love to speak to her more about it." 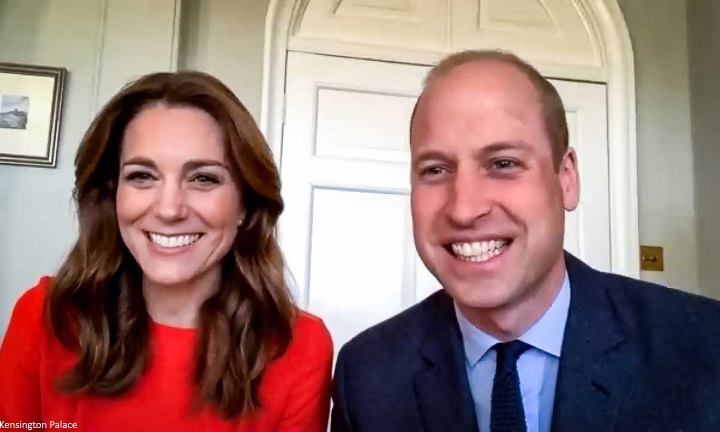 Last year Kate made a return visit to Bletchley Park to mark the 75th anniversary of the D-Day landings. In a foreword for the 2016 puzzle book produced by GCHQ, the UK’s Signals Intelligence and Cyber Security agency, the Duchess wrote: "I have always been immensely proud of my grandmother, Valerie Glassborow, who worked at Bletchley Park during the Second World War. They hardly ever talked about their wartime service, but we now know just how important the men and women of Bletchley Park were, as they tackled some of the hardest problems facing the country". 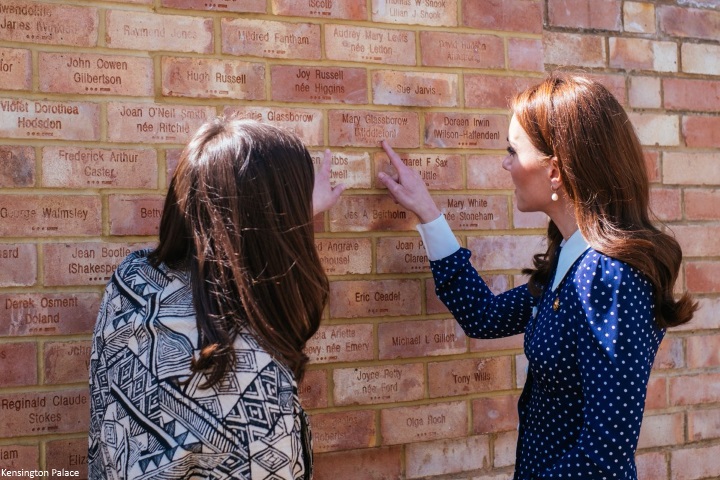 'The royal couple had the honour of speaking with Charles Ward, the oldest resident at Mais House, a Royal British Legion care home in Bexhill-on-Sea. Charles, aged 101, told the Cambridges about working on "secret messages" from then Prime Minister, Sir Winston Churchill.

The veteran, from South Kirby in Yorkshire, later described the correspondence he received from the wartime leader, saying: "The message came from Churchill, I had to decipher it, re-encipher it and send it to his son in Yugoslavia to say, 'Happy Birthday'. And then there was another one from the son to Churchill himself to say congratulations on your speech in Parliament. When I told William and Kate that story, they giggled."


The Duchess wore her L.K. Bennett Cayla dress for the call. 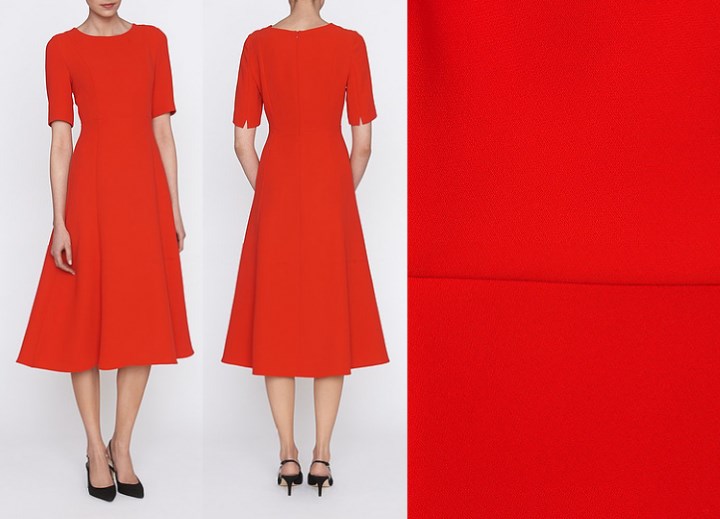 The Royal family have always been central on these days. This photo of King George VI, Queen Elizabeth, Princesses Elizabeth and Margaret shows one of their eight balcony appearances on Victory in Europe Day. 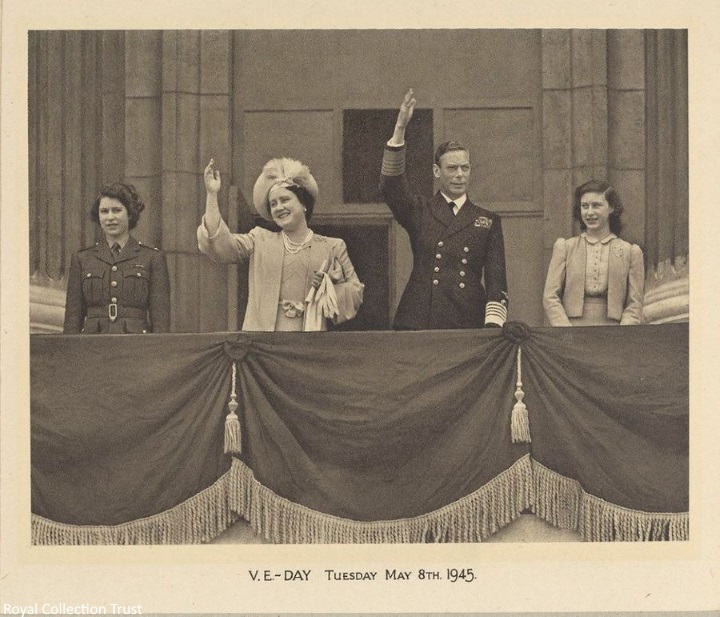 The Queen was only nineteen years old on VE Day. She recorded her memories of the event thirty years later: "I remember lines of unknown people linking arms and walking down Whitehall, all of us just swept along on a tide of happiness and relief."


This morning, the Prince of Wales and the Duchess of Cornwall represented the Royal family in a two-minute silence at Balmoral War Memorial in Scotland against the backdrop of a piper playing. Charles wore highland dress, a Hunting Stewart kilt with a Gordon Highlanders tie and his medals. The message on his wreath read "In Everlasting Remembrance". Camilla was elegant in her green four rifles dress and 12th Royal Lancers regimental brooch in memory of her father, Major Bruce Shand, who served with the regiment. Camilla wrote: "In memory of my darling father and all the officers and men of the XII Lancers, who fought so bravely to give us peace."

Camilla read excerpts from her father's WWII diary. Major Shand was taken to Germany as a prisoner of war in 1942 before escaping and returning to England in 1945. Click here to listen in full. The Duchess reads her father's words about escaping and losing two of his closest comrades during the Battle of El Alamein. In 2006, Charles and Camilla visited Egypt at Major Shand's request to lay flowers on the graves of her father’s two crewmen, Sergeant Charles Francis and Corporal Edward Plant.

Camilla spent time today calling to two veterans of the 7th Armoured Division, also known as the Desert Rats, who served in North Africa during the Second World War. The Duchess has previously met both Sergeant-Major Lee Burritt and Jimmy Sinclair and sent both homemade biscuits from Birkhall. A very thoughtful and kind gesture. 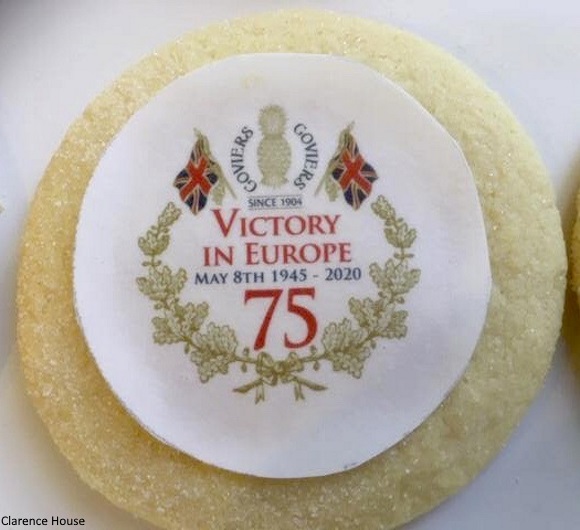 Charles read an extract from his grandfather, King George VI's diary from VE Day, 8 May 1945: "The day we have been longing for has arrived at last." Writing about his daughters Elizabeth and Margaret he noted: "Poor Darling. They have never had any fun yet."

“The day we have been longing for has arrived at last.”

The Prince of Wales reads an extract from his grandfather King George VI’s diary which describes The King’s experience of #VEDay on 8th May 1945.#VEDay75 pic.twitter.com/Rx0bsrh0SI
— Clarence House (@ClarenceHouse) May 8, 2020


Meanwhile, the Princess Royal and the Earl and Countess of Wessex made a number of video calls to veterans across the UK. Below, a message Sophie sent to her patronage Blind Veterans UK. 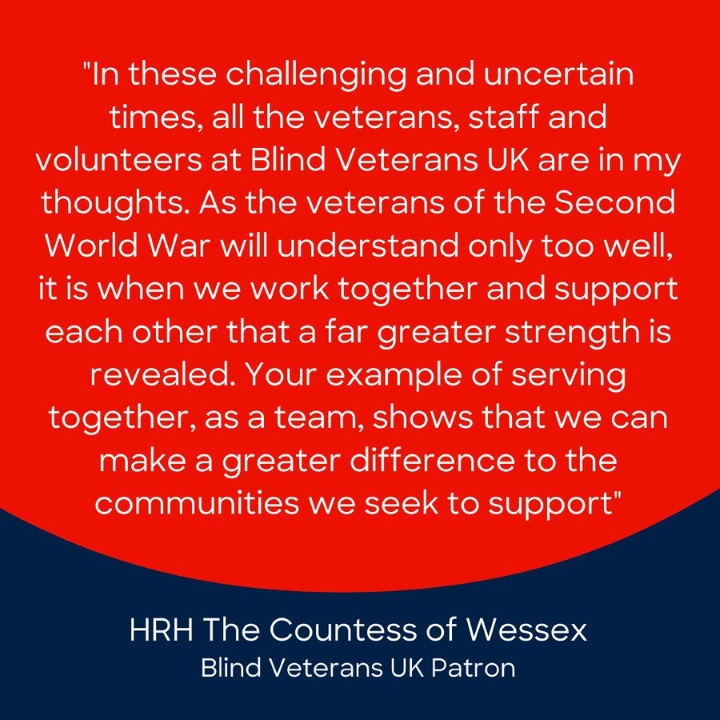 The Red Arrows paid tribute as they flew over central London. 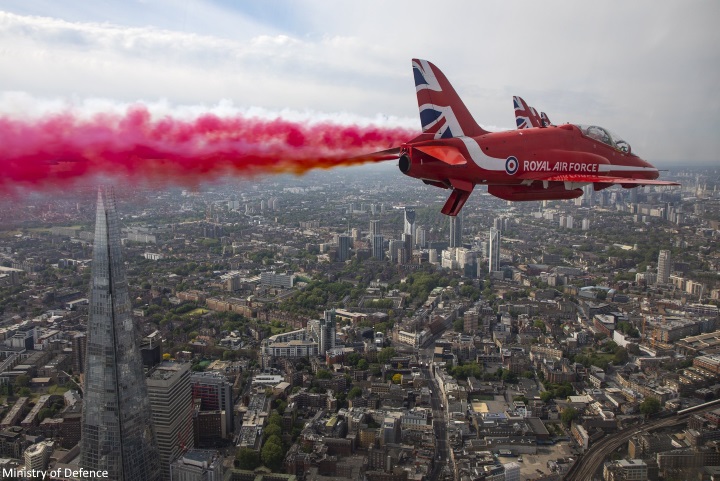 After their London flypast, the Red Arrows flew over the Air Forces Memorial at Runnymede in Surrey. The memorial commemorates the 20,456 men and women who lost their lives during the war and have no known grave. 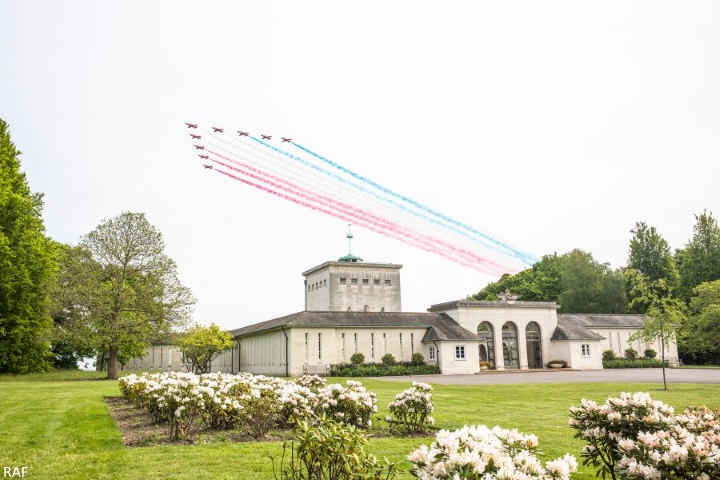 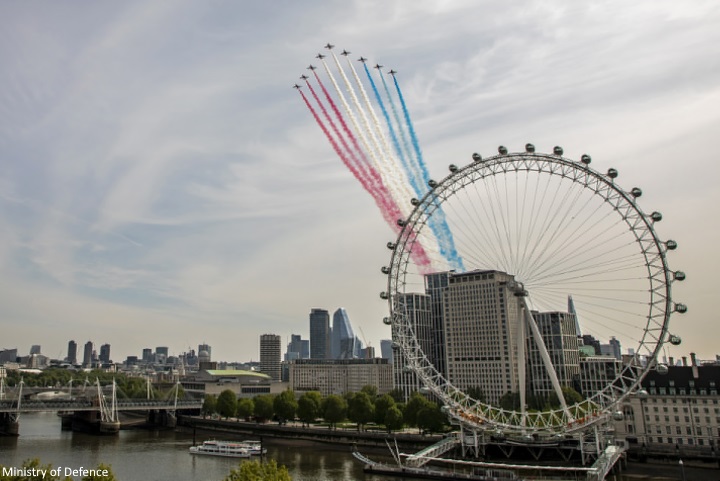 On 8 May 1945, Prime Minister Winston Churchill made an announcement on the radio at 3 pm that the war in Europe had finally ended following Germany's surrender. Churchill said: "My dear friends, this is your hour." 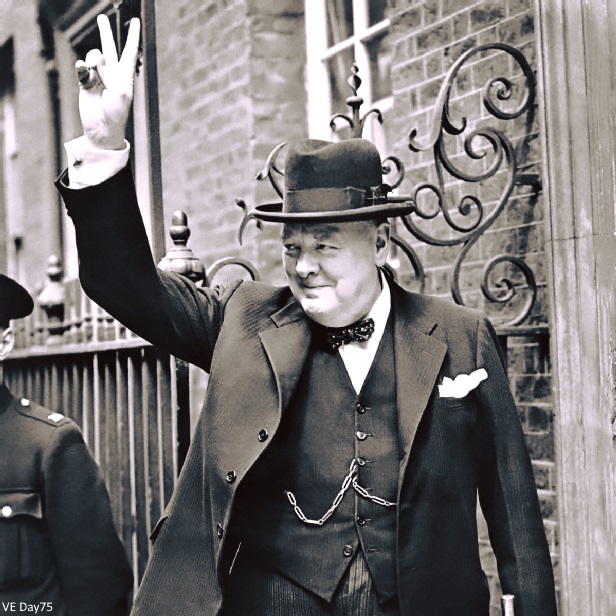 There were joyous eruptions onto the streets from those of all ages. 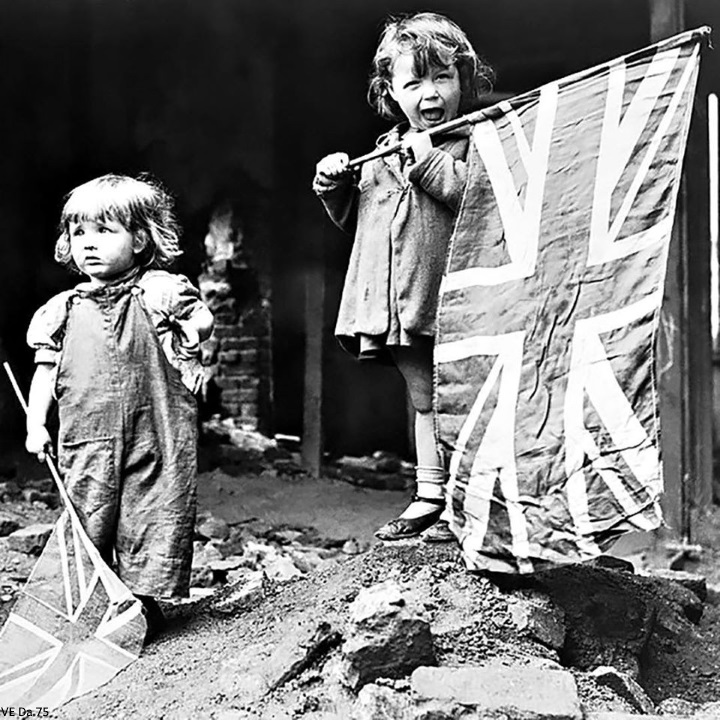 The scenes 75 years ago. 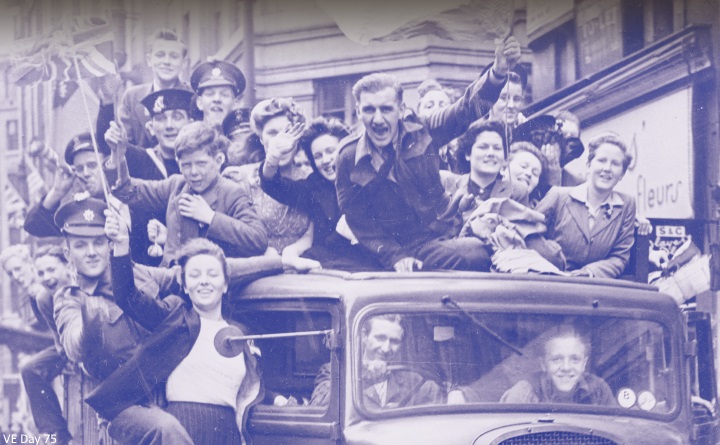 A look at how British newspapers marked VE Day. 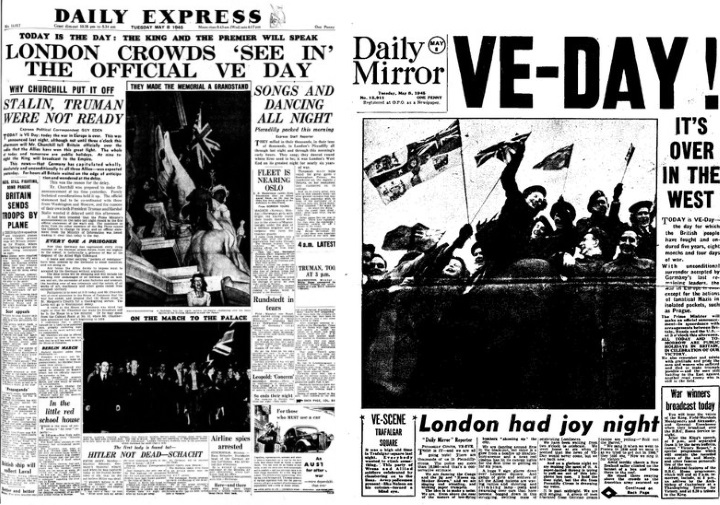 On VE Day at 9 pm the Queen's father addressed the nation: "There is great comfort in the thought that the years of darkness and danger in which the children of our country have grown up are over and, please God, forever. We shall have failed, and the blood of our dearest will have flowed in vain, if the victory which they died to win does not lead to a lasting peace, founded on justice and established in good will."

At the same time tonight, Her Majesty followed in her father's footsteps in a rare address. "I speak to you today at the same hour as my father did, exactly 75 years ago. His message then was a salute to the men and women at home and abroad who had sacrificed so much in pursuit of what he rightly called a “great deliverance”. The war had been a total war; it had affected everyone, and no one was immune from its impact. Whether it be the men and women called up to serve; families separated from each other; or people asked to take up new roles and skills to support the war effort, all had a part to play.  At the start, the outlook seemed bleak, the end distant, the outcome uncertain. But we kept faith that the cause was right - and this belief, as my father noted in his broadcast, carried us through."

'Never give up, never despair - that was the message of VE Day. I vividly remember the jubilant scenes my sister and I witnessed with our parents and Winston Churchill from the balcony of Buckingham Palace. The sense of joy in the crowds who gathered outside and across the country was profound, though while we celebrated the victory in Europe, we knew there would be further sacrifice.  It was not until August that fighting in the Far East ceased and the war finally ended.
Many people laid down their lives in that terrible conflict. They fought so we could live in peace, at home and abroad. They died so we could live as free people in a world of free nations. They risked all so our families and neighbourhoods could be safe. We should and will remember them.

As I now reflect on my father’s words and the joyous celebrations, which some of us experienced first-hand, I am thankful for the strength and courage that the United Kingdom, the Commonwealth and all our allies displayed.

The wartime generation knew that the best way to honour those who did not come back from the war, was to ensure that it didn’t happen again. The greatest tribute to their sacrifice is that countries who were once sworn enemies are now friends, working side by side for the peace, health and prosperity of us all.

You'll notice the Queen's ATS cap was on her desk tonight. The Queen held the rank of Second Subaltern on joining the ATS. Five months later, she was later promoted to Junior Commander, the equivalent of Captain. She is the only living Head of State to have served in the Second World War.

I'm closing with a portion of Her Majesty's speech I found particularly moving "Today it may seem hard that we cannot mark this special anniversary as we would wish.  Instead we remember from our homes and our doorsteps. But our streets are not empty; they are filled with the love and the care that we have for each other. And when I look at our country today, and see what we are willing to do to protect and support one another, I say with pride that we are still a nation those brave soldiers, sailors and airmen would recognise and admire." I know the Queen's personal and beautifully delivered speech will lift spirits tonight.
Posted by Admin at 22:42:00