The Duchess Brings Back White & Gold McQueen For BAFTA Awards

It was a star-studded night at the Royal Albert Hall for the annual BAFTA awards. The event celebrated the very best in British and international contributions to film over the past year. 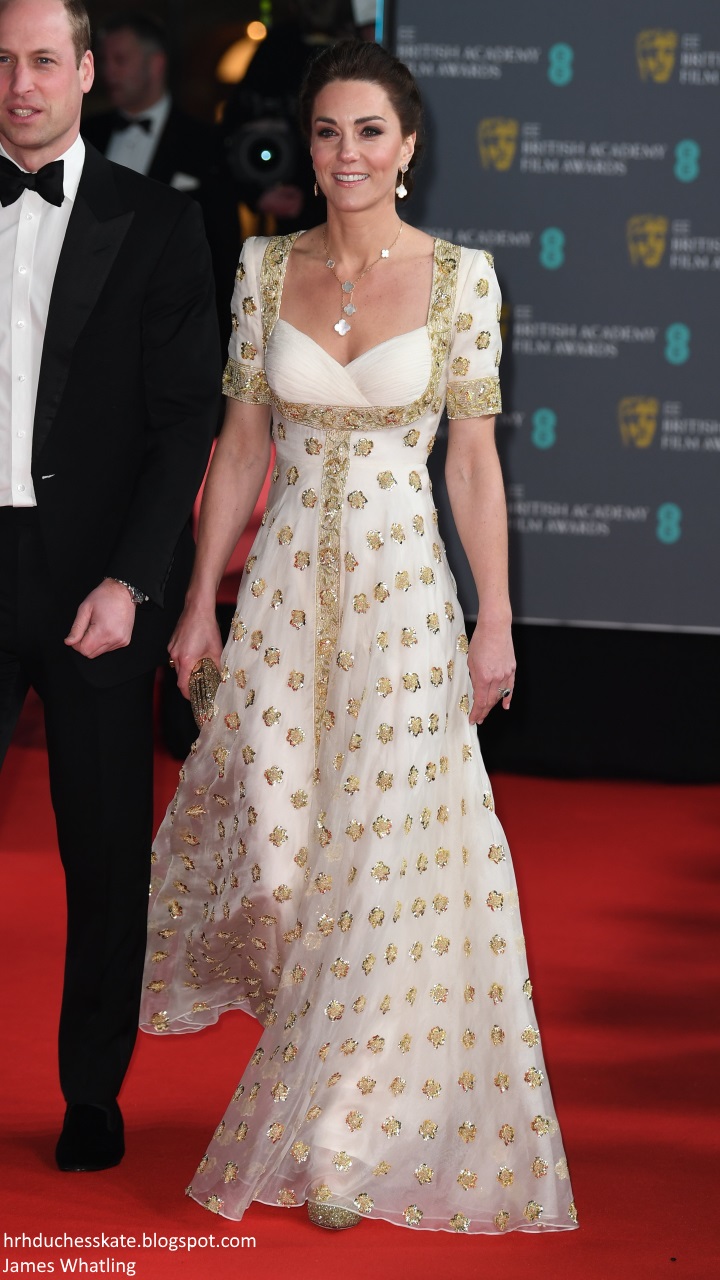 The Duke and Duchess of Cambridge walked the red carpet upon arrival. 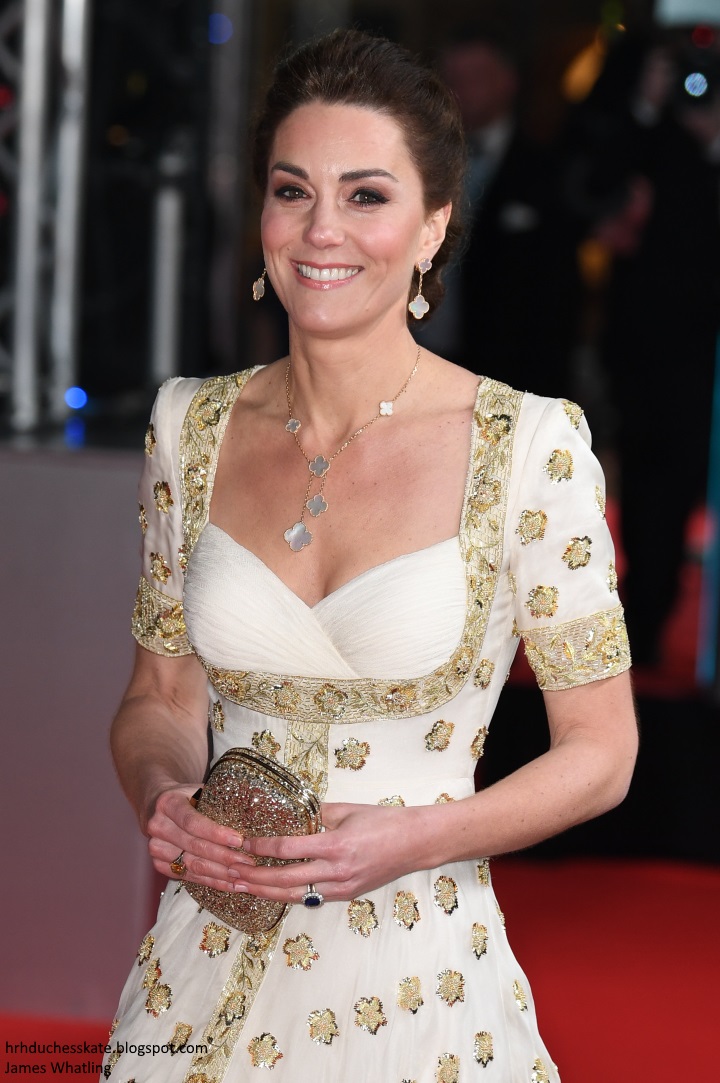 The BAFTA awards are becoming an annual staple on William and Kate's calendar. It is the fourth time they have attended and the third consecutive year. Prince William has been President of the Academy since 2010, and both he and the Duchess have supported BAFTA’s charitable activities by attending events across the charity’s learning programme, including Young Game Designers and BAFTA Kids events, as well as others related to building cross-cultural collaborations with the creative industries in China. 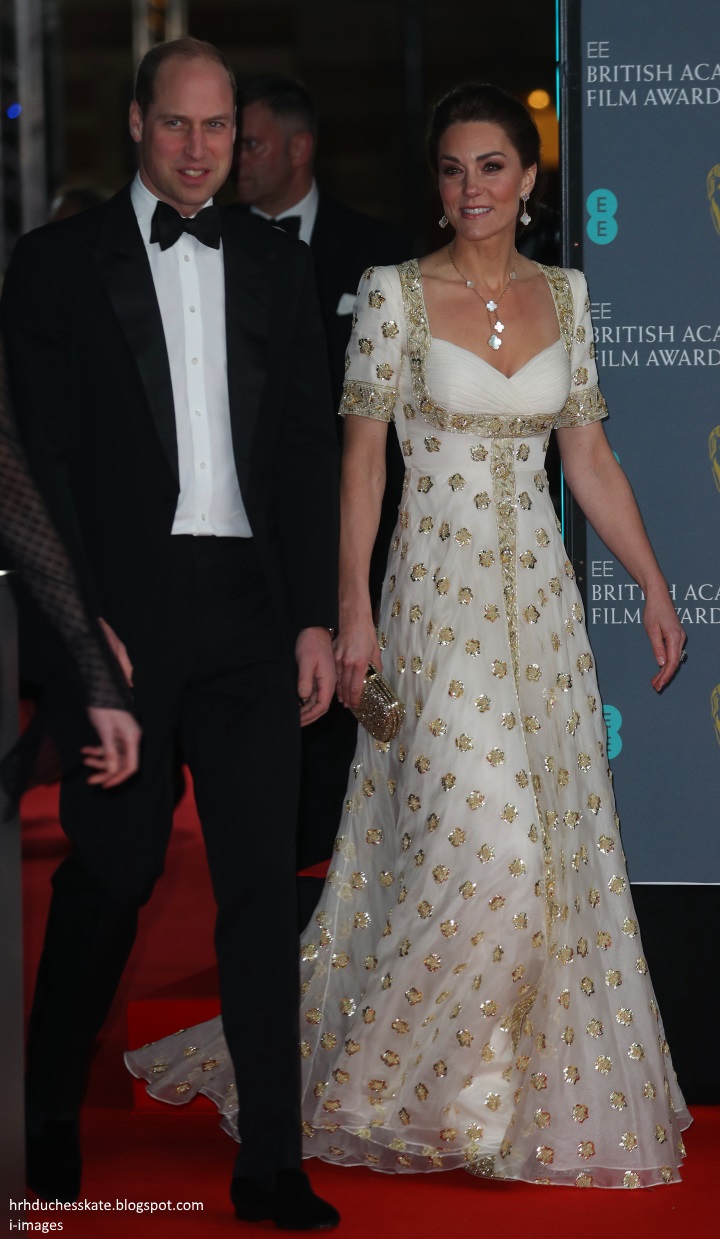 Ahead of the ceremony Kensington Palace said: "BAFTA is a world-leading independent arts charity that brings the very best work in film, games and television to public attention and supports the growth of creative talent in the UK and internationally. While BAFTA is well-known for celebrating excellence and championing creativity through its awards, it is a charity committed to identifying talented individuals, and making sure they receive the encouragement, professional support and advice that will enable them to succeed, regardless of their background or other circumstances." 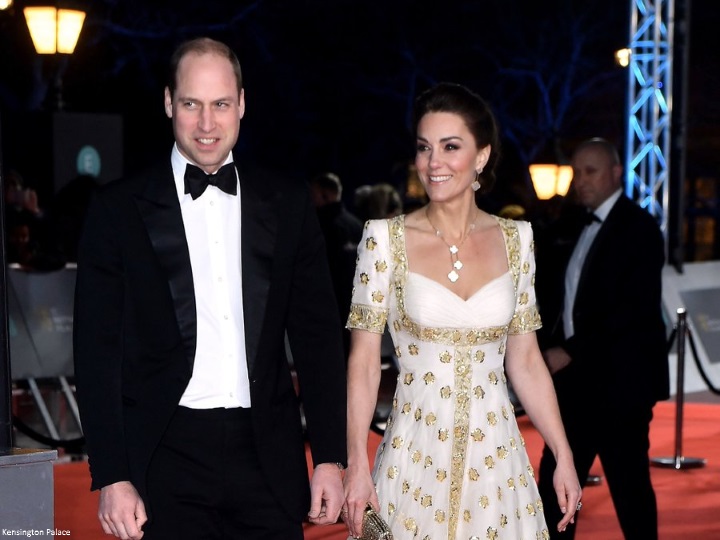 A group of excited onlookers told Kate she looked beautiful...they didn't forget to compliment William either :)


This video is brilliant of the Duke and Duchess of Cambridge!! 😂😂😂 #dukeofcambridge #DuchessofCambridge #EEBAFTAs #BAFTAs

The prestigious BAFTAs are a highlight during awards season, with winners on the night often considered front-runners for the Oscars.

William and Kate take their seats.

It's been a stellar twelve months in film hasn't it? Nominations for Best Film are Once Upon A Time In Hollywood, 1917, Joker, The Irishman and Parasite. 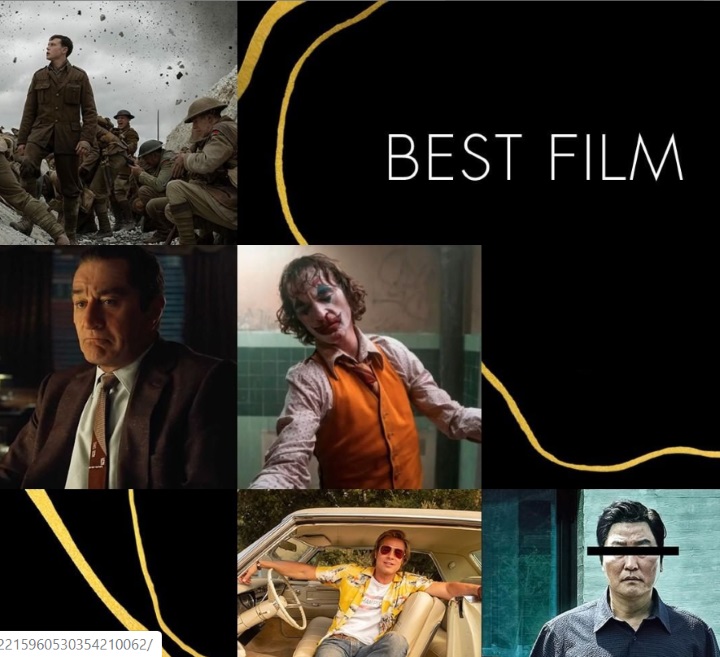 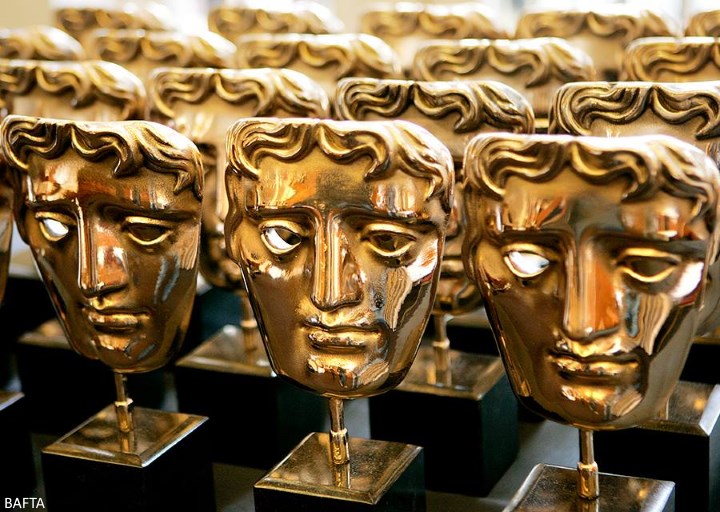 
In his role as president, William awarded The Fellowship to film producer Kathleen Kennedy. It is the highest accolade bestowed by the Academy to an individual in recognition of an outstanding and exceptional contribution to film, games or television. In 1981 Ms Kennedy co-founded production company Amblin Entertainment alongside her husband Frank Marshall and Steven Spielberg. The company's credits include Schindler's List, E.T. and Gremlins. In the 1990s Kennedy and Marshall founded their own joint company which went on to produce successes such as The Sixth Sense, The Curious Case of Benjamin Button and The Bourne Identity. Since 2012, she has been president of Lucasfilm. In 2019, she was appointed Honorary Commander of the Order of the British Empire, for services to film production in the United Kingdom. 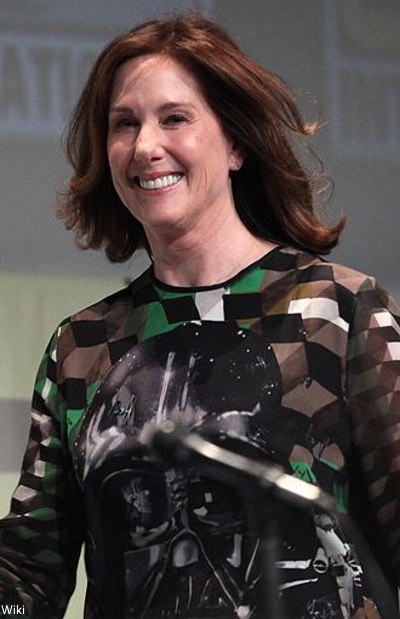 'As President of Lucasfilm, Kennedy oversees the company’s three divisions: Lucasfilm, Industrial Light & Magic and Skywalker Sound. She was the producer of Star Wars: The Force Awakens (2015), which broke the record for the biggest domestic opening of all time that year, and Rogue One: A Star Wars Story, the no. 1 grossing film in 2016. She went on to produce Star Wars: The Last Jedi (2017), the highest grossing film worldwide in 2017, as well as Solo: A Star Wars Story (2018). Kennedy is currently producing Star Wars: The Rise of Skywalker (2019) and is executive producing the live action Star Wars series for Disney+, The Mandalorian (2019).

Aside from her executive and producer roles, she was one of the founding council members of Hollywood Commission to Eliminate Sexual Harassment and Advance Equality and is currently on the board of the LA Promise Fund, Library of America and USC’s School of Cinematic Arts.

Kathleen Kennedy said: “British filmmaking has always played a significant role in both my life and career. The boundless creative vision of artists such as Tom Stoppard, David Lean, Chris Nolan, Stephen Daldry and Peter Morgan continues to inspire me. The recent Star Wars movies – all shot on sound stages and locations across the UK – are just the latest opportunities that I’ve had the privilege to work with British crews and filmmakers, which began in 1980 with Raiders of the Lost Ark and continued with Temple of Doom, Empire of the Sun, Young Sherlock Holmes, War Horse, The Adventures of Tintin, and others. I am deeply honored to receive the Fellowship from BAFTA, and am incredibly thankful to have worked with so many talented members of our extended family in the British filmmaking community.”


William opened his speech with a joke about The Crown.

'The Duke of Cambridge shared concern about the lack of diversity at the BAFTA Awards 2020, saying that it "cannot be right in this day and age." Prince William delivered a speech as he presented the Fellowship award to film producer Kathleen Kennedy. The Duke, who has been President of BAFTA since 2010, said: "Both here in the UK and in many other countries across the world we are lucky to have incredible film makers, actors, producers, directors and technicians - men and women from all backgrounds and ethnicities enriching our lives through film.
"Yet in 2020, and not for the first time in the last few years, we find ourselves talking again about the need to do more to ensure diversity in the sector and in the awards process – that simply cannot be right in this day and age!"

William added: "I know that both Pippa, Chair of BAFTA, and Amanda, BAFTA CEO, share that frustration and continue to work tirelessly to ensure that creative talent is discovered and supported. BAFTA take this issue seriously, and following this year’s nominations, have launched a full and thorough review of the entire Awards process to build on their existing work and ensure that opportunities are available to everyone."


Afterwards, the couple met with several award winners including Renee Zellwegger who won Best Actress for her outstanding performance in Judy.


The Duchess of Cambridge spoke to Renee Zellweger, who won the @BAFTA for Best Actress for her role in ‘Judy’, after the ceremony pic.twitter.com/x35OT6oQ1a
— Lizzie Robinson (@LizzieITV) February 2, 2020


Roya Nikkhah reports William told Best Actor winner Joaquin Phoenix "I absolutely loved The Joker. It was brilliant.  It put it off and put it off before watching it, as people kept telling me "be careful when you choose to watch it".  I'm glad I didn't watch it before bed."


The Duke also chatted with best actor winner, Joaquin Phoenix, who jokingly dropped a low curtsy to William as they were introduced. “Thank you for your speech,” he told William. pic.twitter.com/o0DhMFnaj8
— Roya Nikkhah (@RoyaNikkhah) February 2, 2020 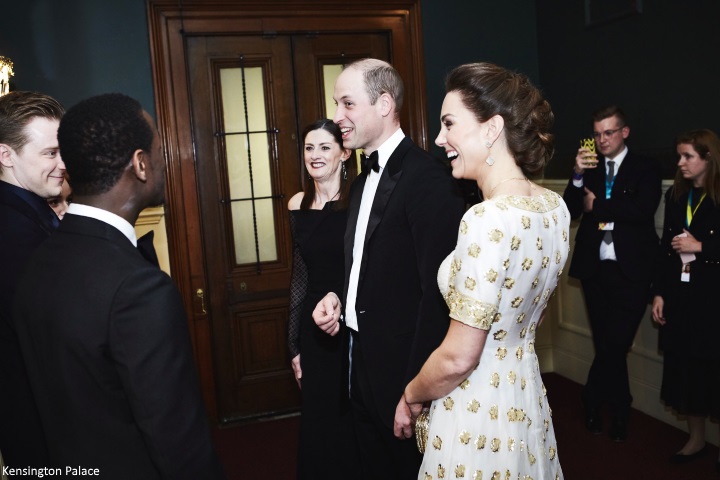 In 2016, Kate selected a bespoke Alexander McQueen gown with a floral print and tiered skirt. In 2018, it was bespoke dark green Jenny Packham with show-stopping emeralds and last year Kate wore a stunning one shoulder McQueen design. 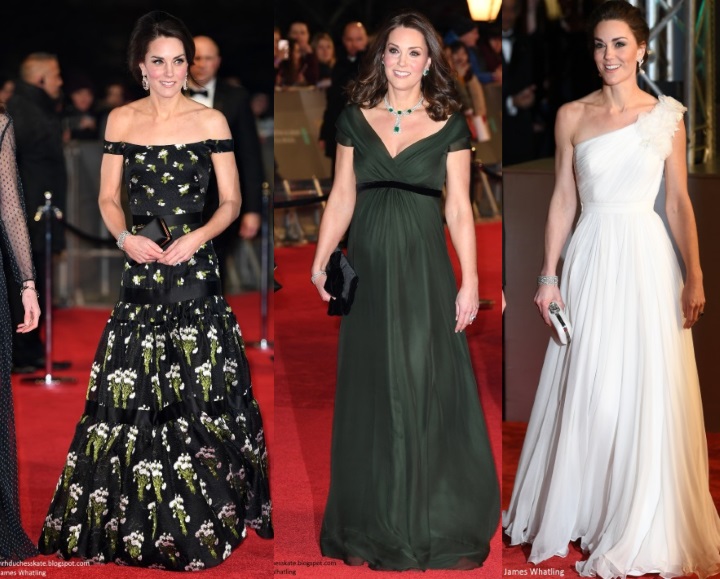 This year, the BAFTAs asked guests to be more sustainable in their sartorial choices. Whether re-wearing items from their wardrobes or supporting sustainable designers. A spokesperson told Grazia magazine "Sustainability is very important to Bafta, and we’re doing more than ever before. The goal is that the EE British Academy Film Awards 2020 will be carbon neutral, working towards having a net positive impact on the environment. From travel and food, to branding and materials, Bafta is ensuring the awards are as sustainable as possible." We all expected Kate would choose a repeat for the night (with many of us hoping to see her black velvet McQueen gown). Instead, the Duchess chose another piece by the designer - the white gown with gold embroidery she debuted for a state dinner during the Malaysia tour in 2012. 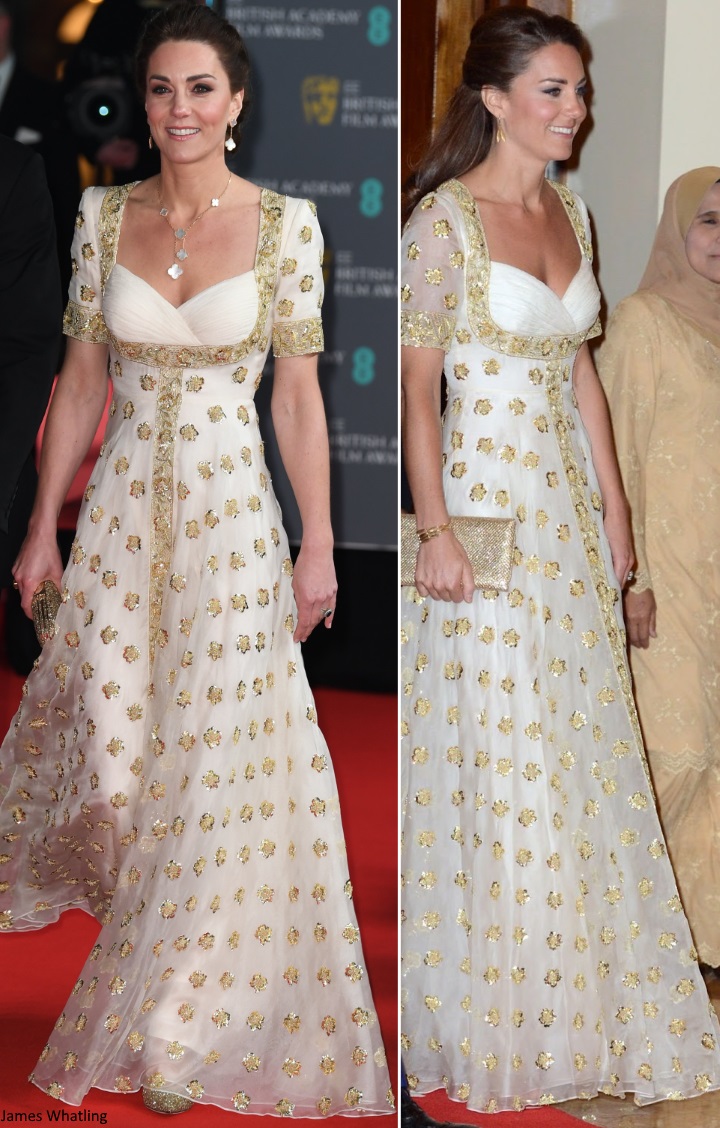 You'll notice the Hibiscus flower adorns the garment, the official flower of Malaysia. 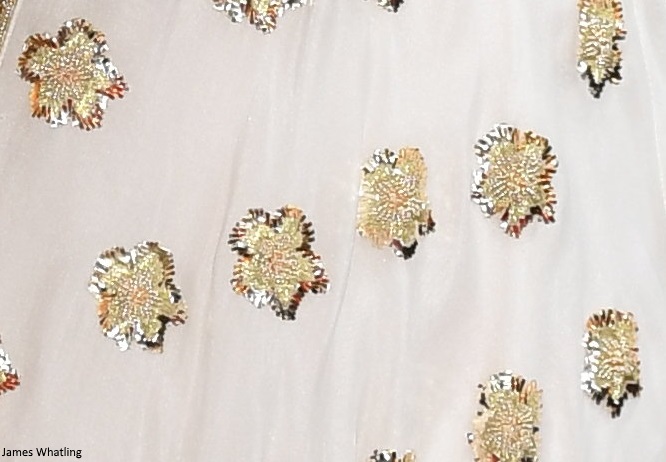 As the piece was specifically created for the tour, I hadn't expected to see it again. I've often wondered how many of Kate's looks are stored in the archives for future exhibitions - pieces we may not see publicly again. I thought it possible this gown may fall in that category. It was a divisive piece on its first outing. Has your opinion changed almost eight years later? I was surprised to see it again. I do think it works well in this setting and it's quite different from Kate's signature choices in gowns. The accompanying gold clutch and shoes in addition to the striking updo elevated the piece for me. As you can see in the photos below, the sleeves of the gown have been altered. 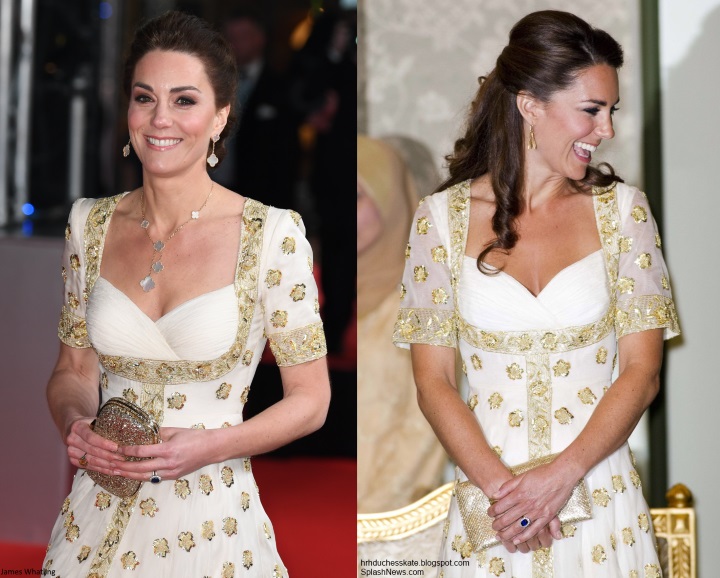 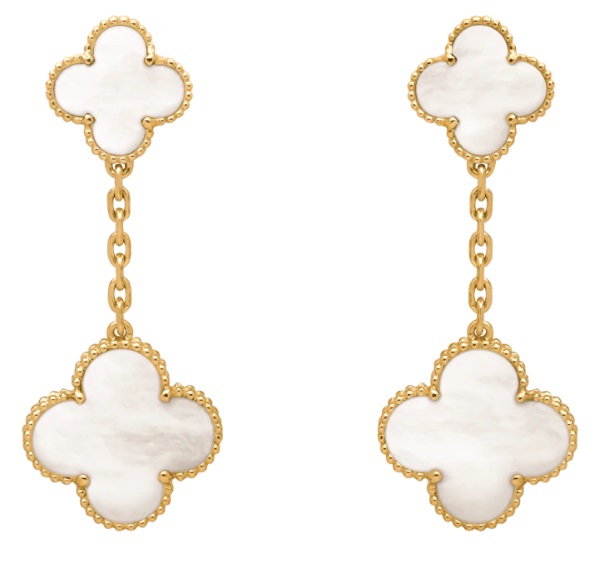 The matching necklace in yellow gold and mother of pearl. 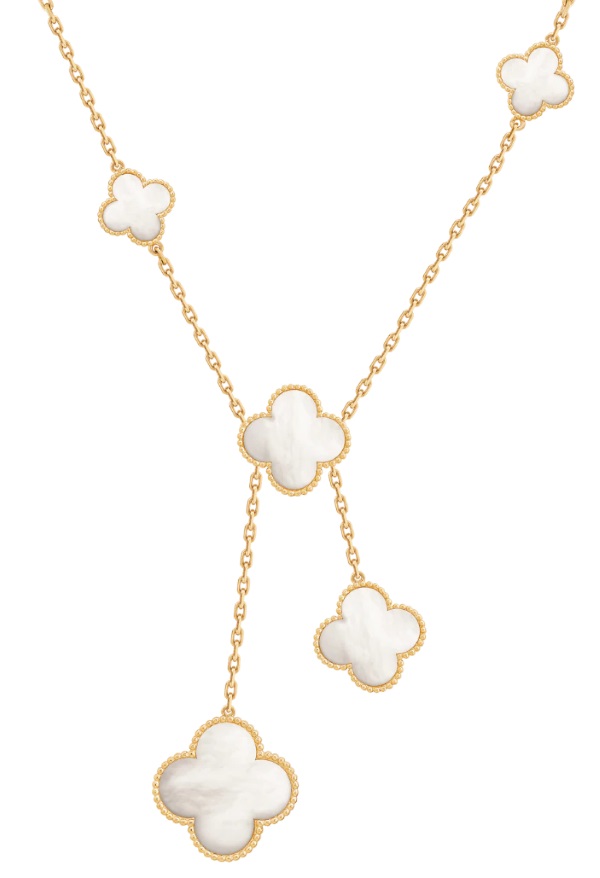 And the citrine cocktail ring Kate's had for over a decade. 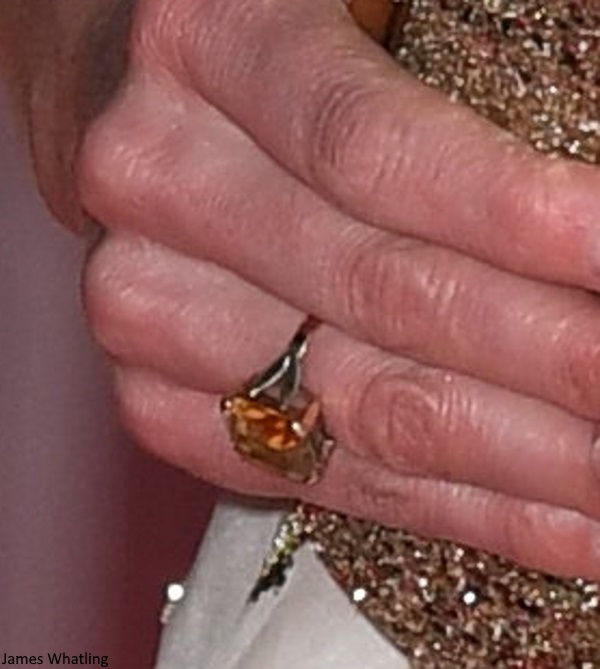 Kate's fabulous shoes are the gold Jimmy Choo Fireball Glitter Degrade pointy toe pumps. They are available in several colours at Net-A-Porter. The Duchess also owns them in silver. 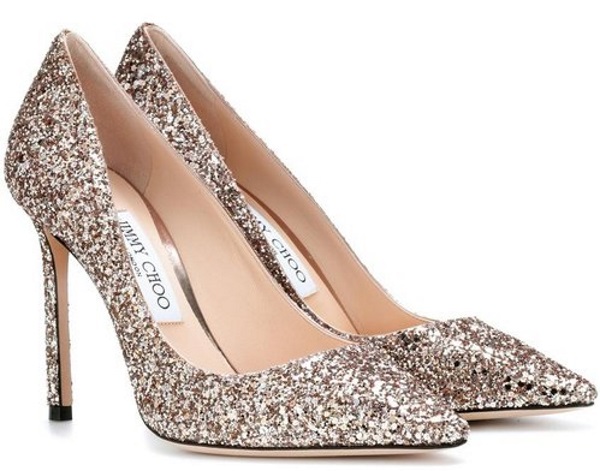 And carried the Anya Hindmarch Marano clutch. With many thanks to the UFO No More team for their work on this look. 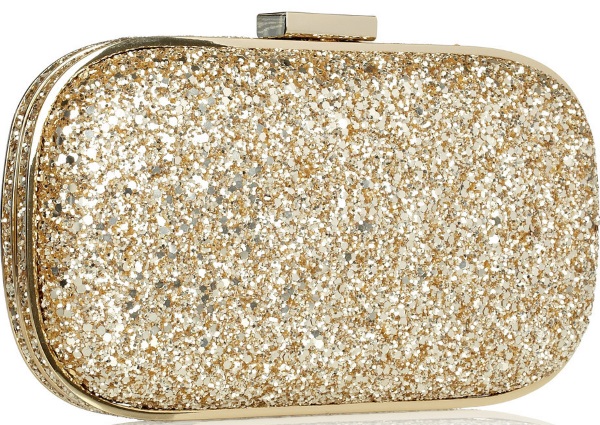 A closer look at Kate's updo.