UPDATED: The Duchess Photographs Holocaust Survivors: "Their Stories Will Stay With Me Forever"

Ahead of Holocaust Memorial Day 2020 tomorrow, it has been revealed the Duchess of Cambridge photographed two Holocaust survivors, Steven Frank and Yvonne Bernstein, with their grandchildren. The portraits will be part of a new exhibition due to open later this year, which will bring together 75 images of survivors with their loved ones to mark the 75th anniversary of the end of the Holocaust. Kate took the photos earlier this month at Kensington Palace in her role as patron of the Royal Photographic Society. 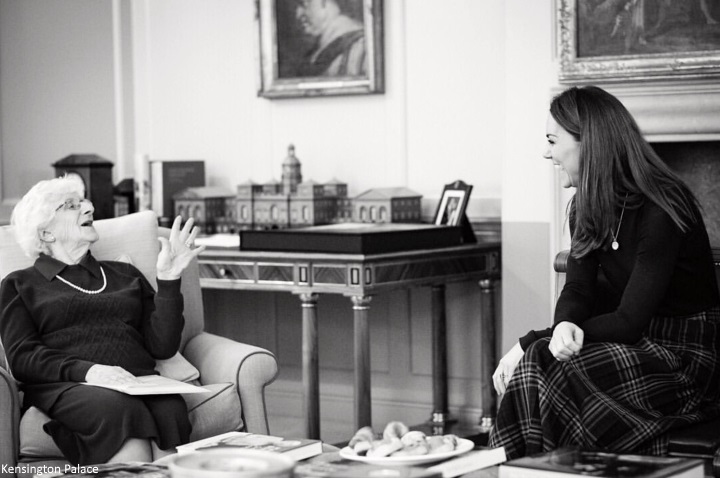 Steven Frank was photographed with his granddaughters Maggie and Trixie. Originally from Amsterdam, Steven survived several concentration camps as a child. It was heartbreaking to read Steven and his brothers were 3 of only 93 children out of 15,000 who survived Theresienstadt camp where life or death was determined capriciously. 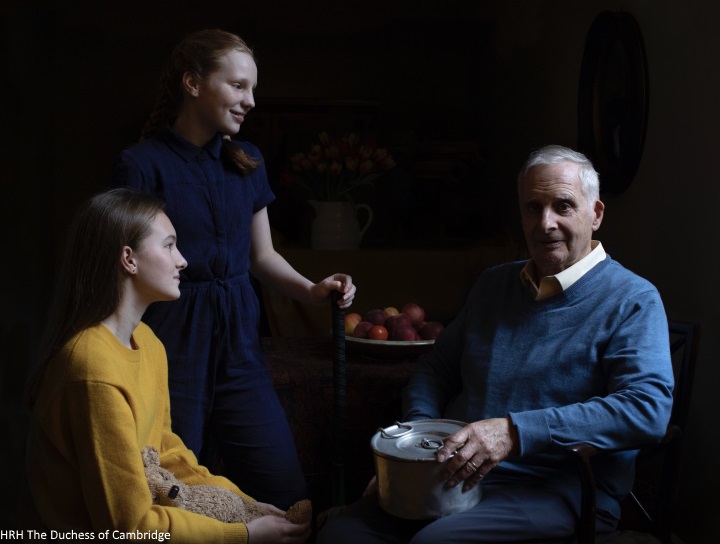 Speaking about the project Mr Frank said "I would hope that the people who look at these pictures not only look at the beauty of the photography, but they will also think of the people behind the photos and their families that they lost in the Holocaust". Below Steven (in the centre) with his parents and brothers as a young boy. 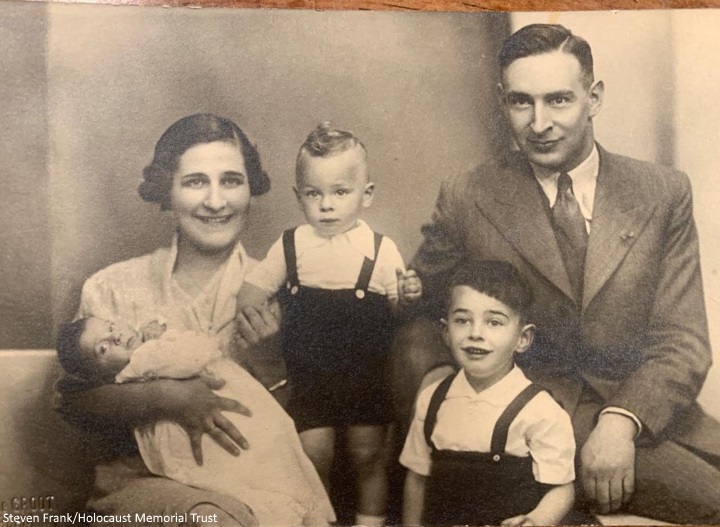 More from the Royal Photographic Society:

His granddaughter Trixie said: ‘It was amazing, The Duchess of Cambridge was really interested in our family and in Opa’s story, and the items we brought with us.’ Her sister Maggie said ‘I think it helped put into perspective that he’s just our Opa – he’s our grandpa as well as a Holocaust survivor. It’s important to tell the story so it doesn’t happen again.’


Yvonne Bernstein is originally from Germany. She was a hidden child throughout most of the Holocaust travelling in the care of relatives through France and frequently changing homes. Yvonne was photographed with her eleven-year-old granddaughter Chloe Wright. 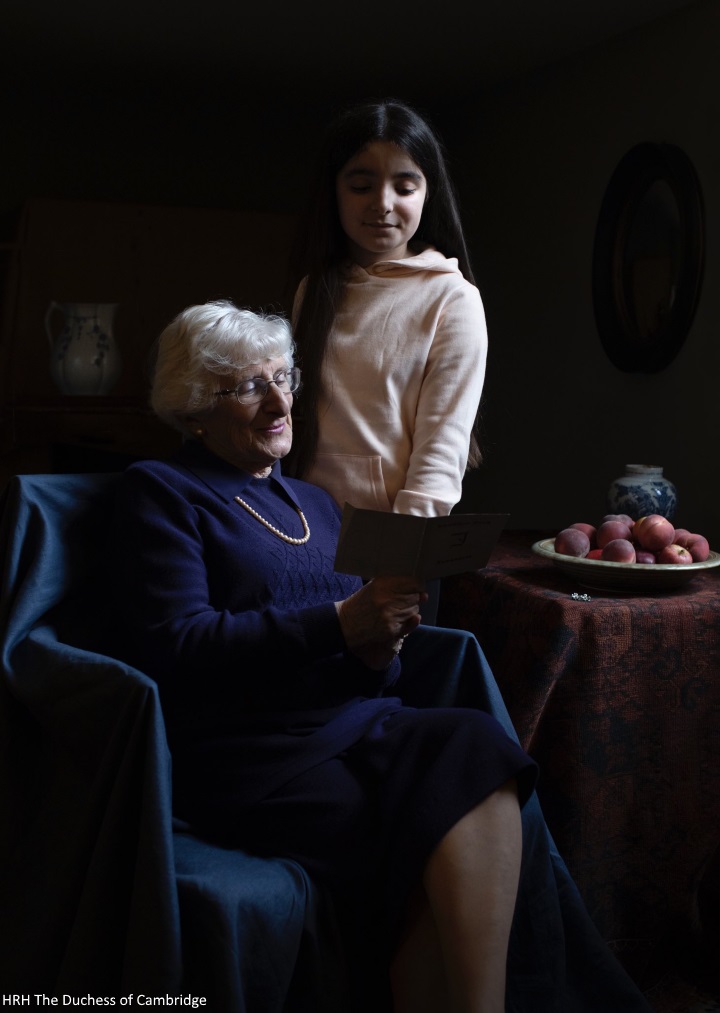 Yvonne pictured as a little girl. 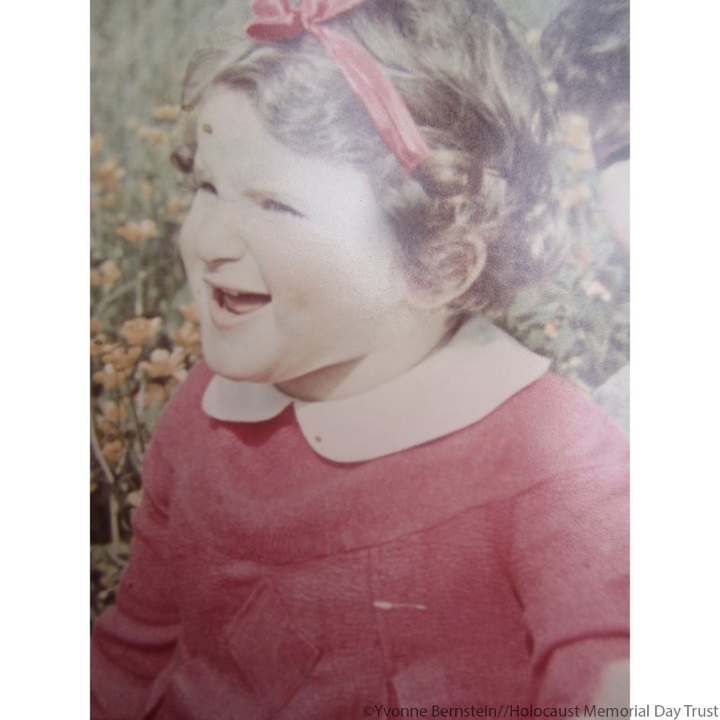 Speaking about the experience and the impact of meeting survivors, the Duchess said: "The harrowing atrocities of the Holocaust, which were caused by the most unthinkable evil, will forever lay heavy in our hearts.  Yet it is so often through the most unimaginable adversity that the most remarkable people flourish. Despite unbelievable trauma at the start of their lives, Yvonne Bernstein and Steven Frank are two of the most life-affirming people that I have had the privilege to meet. They look back on their experiences with sadness but also with gratitude that they were some of the lucky few to make it through. Their stories will stay with me forever". 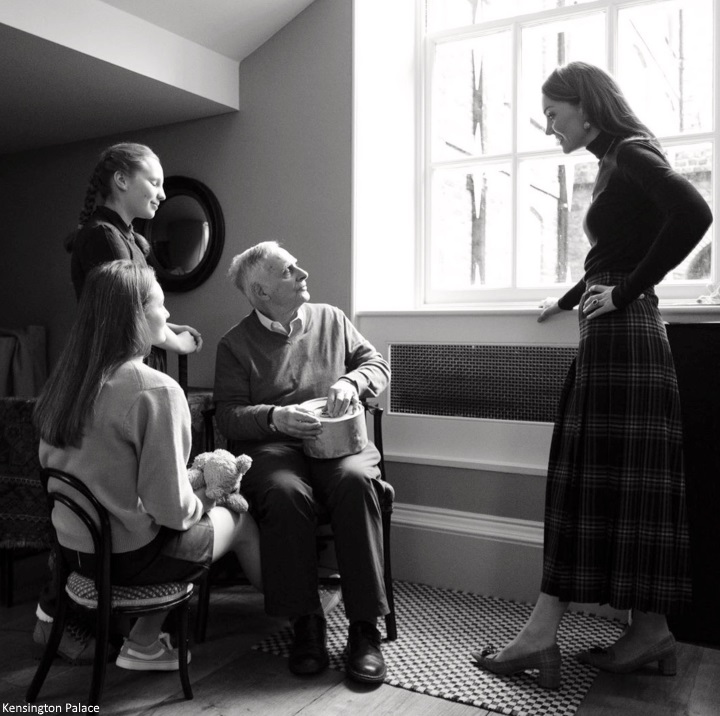 Kate continued "While I have been lucky enough to meet two of the now very few survivors, I recognise not everyone in the future will be able to hear these stories first hand. It is vital that their memories are preserved and passed on to future generations, so that what they went through will never be forgotten. I recall reading the Diary of Anne Frank as a young girl. Her sensitive and intimate interpretation of the horrors of the time was one of the underlying inspirations behind the images. I wanted to make the portraits deeply personal to Yvonne and Steven – a celebration of family and the life that they have built since they both arrived in Britain in the 1940s." 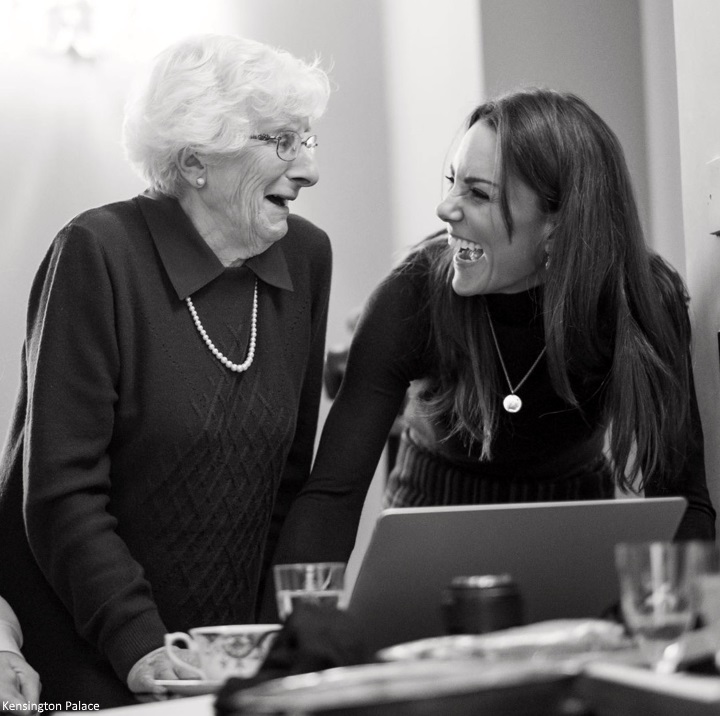 The Duchess was inspired by 17th century Dutch painter Johannes Vermeer because both Steven and Yvonne have strong links to the Netherlands. The Evening Standard reports: "The pictures were taken next to a window that brought in light from the east, the direction of Jerusalem." Kate viewed several of Vermeer's works including 'Girl With A Pearl Earring' at the Mauritshuis art museum during her first solo overseas visit to the the Netherlands in 2016. 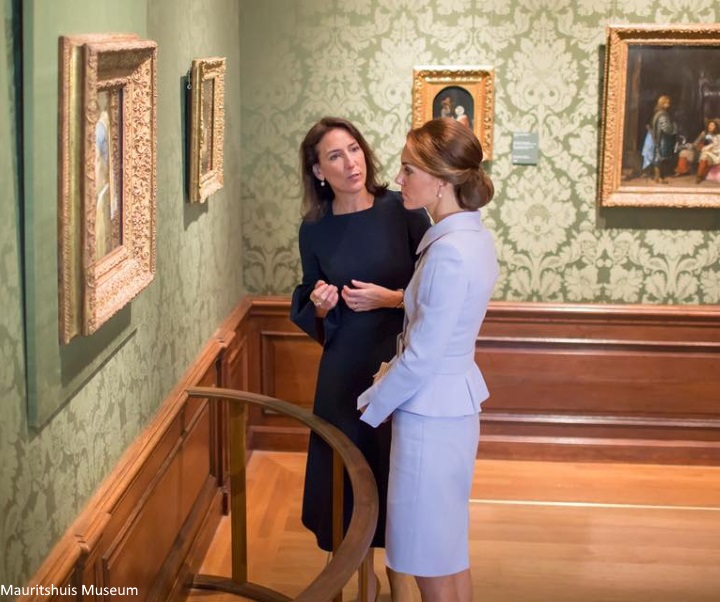 Readers will recall William and Kate visited Stutthof in Poland in 2017. Stutthof was generally regarded as having been amongst the worst in the Nazi concentration camps, causing the deaths of tens of thousands. They met two survivors Zigi Shipper and Manfred Goldberg who shared their harrowing stories. Kate said to them: "What you have been through and you still hold in your memories must be extremely difficult to speak about. Thank you very much for meeting us." 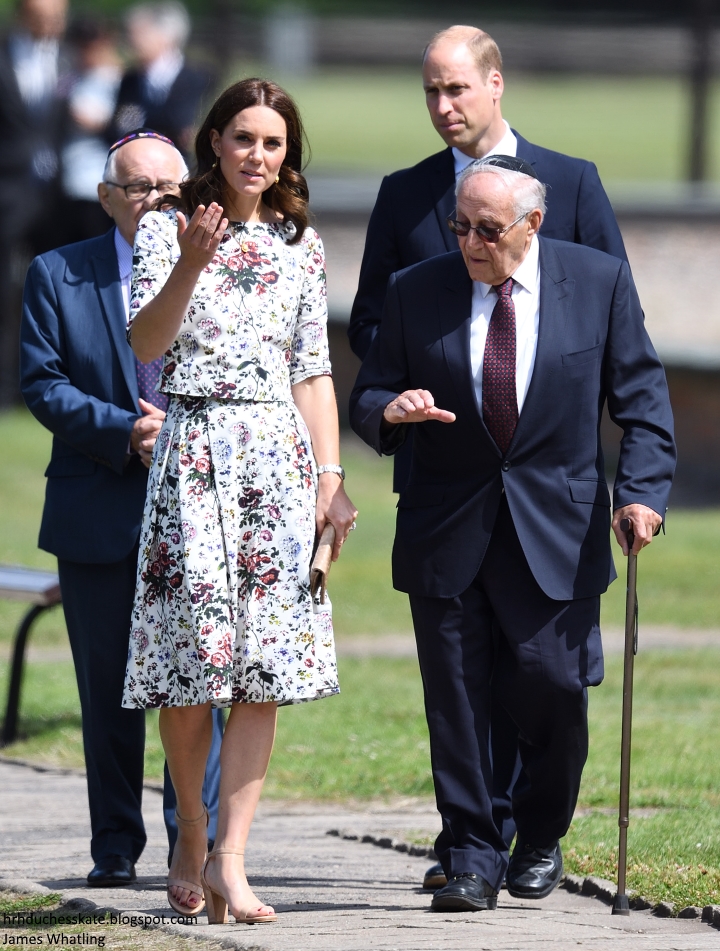 The Holocaust Memorial Trust shared more on the exhibition:

'We are pleased to have worked in partnership with Jewish News and the Royal Photographic Society (RPS) on this exciting project. The project aims to honour the victims of the Holocaust and to celebrate the full lives that survivors have built in the UK, and was originally conceived by Justin Cohen of the Jewish News.

Each of the portraits depicts the special connection between a survivor and younger generations of their family, who over the coming years will carry the legacy of their grandparents. However, the project also aims to inspire people across the UK to consider their own responsibility to remember and share the stories of those who endured persecution at the hands of the Nazis.

Olivia Marks-Woldman, Chief Executive of the Holocaust Memorial Day Trust, said of the project: ‘We are so pleased to be part of this project, as people from across the UK come together to mark Holocaust Memorial Day. The exhibition will be a fitting way to mark 75 years since the world was left scarred by the Holocaust. The survivors featured in these portraits all have very different stories, but each of their lives has been fundamentally changed by the trauma and loss they experienced. What connects these individuals is that, after systematic persecution, they all made the UK their home and the country has been enriched by them and their families.'


The RPS also shared a portrait of John Hajdu, who survived the Budapest Ghetto, with his grandson Zac. It was taken by South African photographer Jillian Edelstein. 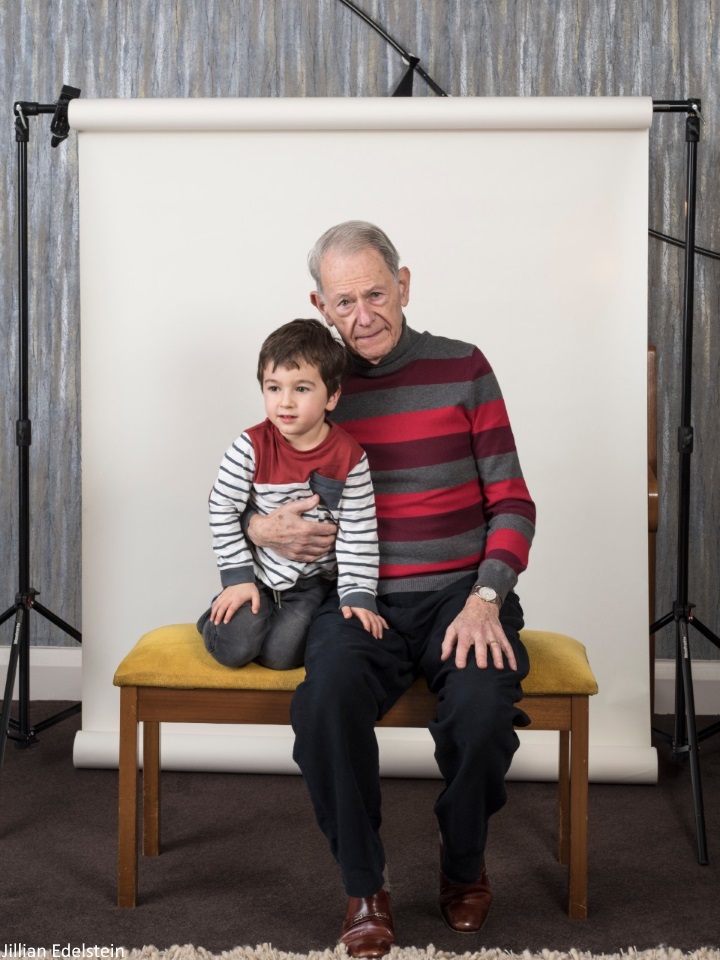 Swiss-born portrait photographer Frederic Aranda photographed Joan Salter with her husband Martin and daughter Shelley. Joan who fled the Nazis as a young child said "When I give my talks I show family photos, because I think it’s so important for them to see us as human beings, especially if they have just seen images of people in camps. I think the fact that the exhibition will include so many different experiences is so important – it will give a much broader idea of what it was like during the Holocaust rather than just hearing from one survivor." 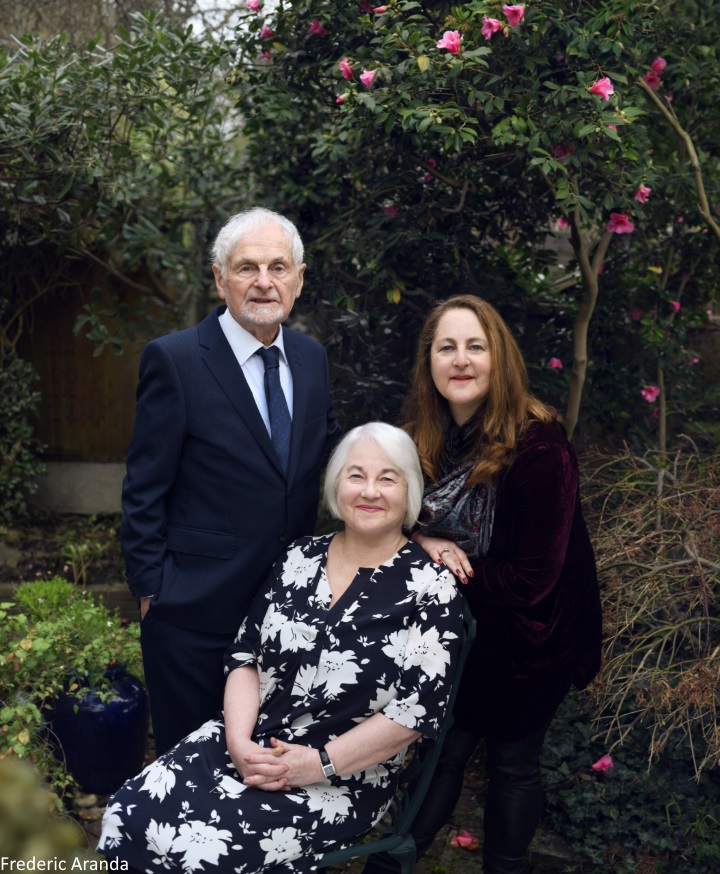 As noted above, the exhibition is the brainchild of Justin Cohen. He wrote a superb piece detailing Kate's involvement from the moment he contacted the Palace to the photography session itself. You can read it in its entirety on the Jewish News website:

'Of course Kensington Palace don’t routinely provide behind-the scenes detail on the machinations that go into such projects but to me, as the grandson of a refugee from the Nazis, it’s important people know this was far from a ‘point and click’ job. I hope that I won’t be sent to the Tower but this time I’ll take the risk.

Having approached the Palace six months ago with the seeds of an idea for a photography project involving the Duchess to mark 75 years since the liberation of Auschwitz, I was delighted (not to mention surprised given the weight of requests the Royals receive) to receive a call asking for more details. Further calls followed and it wasn’t long before Palace aides suggested bringing in the Royal Photographic Society, where she is a patron, to help make my vision of 75 images a reality, and involving the families of survivors to highlight their fortitude in building full lives after the horrors.

But I didn’t dare believe this project would happen until I learnt how much time and thought the Duchess was personally putting into it. The fine art graduate spent several days researching what she could bring to the table in order to best capture these individuals for the future. She was at pains to ensure the survivors were comfortable with the vision and that the spotlight was on the heroes to be pictured and not the Duchess herself.'


Kate did a beautiful job with the portraits; from echoing Vermeer's fondness for domestic interiors in honour of Steven and Yvonne's connections to the Netherlands to using light from the east, it was filled with personal touches. At the heart of this is family history shared through generations and seeing the courage, determination and journey Steven and Yvonne have endured through the eyes of their grandchildren. We saw Steven's granddaughters gazing lovingly at him and Yvonne's tender moment with Chloe. I found the photos and the entire project deeply moving. As children living in a constant state of fear and uncertainty during the Holocaust, Steven and Yvonne must have had many moments where they thought their chances of survival abysmal at best. I'm sure they never imagined they would be recounting their experiences with future generations of their families 75 years later.

Tomorrow, the Duke and Duchess will attend the UK Holocaust Memorial Day Commemorative Ceremony in Westminster.
Posted by Admin at 01:16:00