The Duchess in Green for NATO Reception

The Duchess of Cambridge joined the Queen and a host of royals at Buckingham Palace this evening for a reception marking 70 years of the NATO alliance. 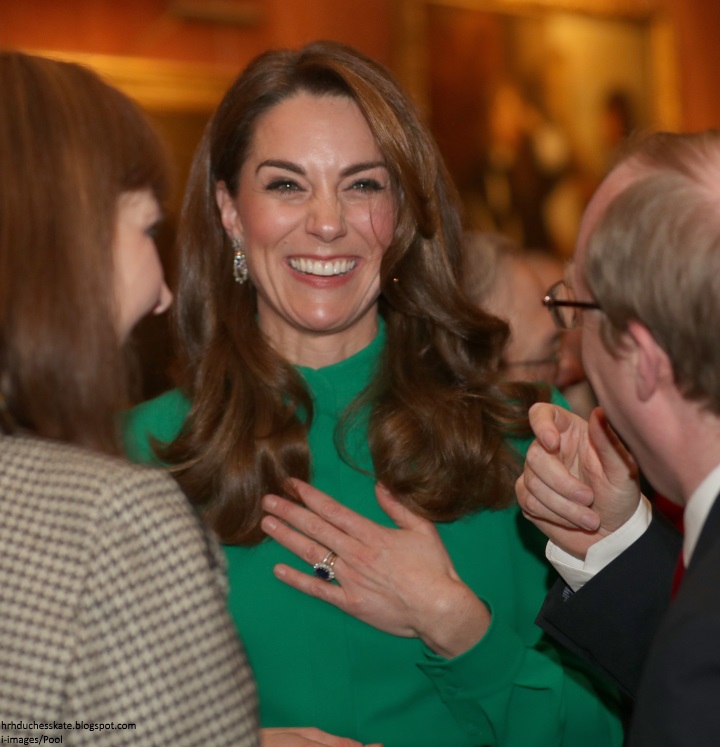 Today the UK welcomed North Atlantic Treaty Organisation (NATO) heads of state and government, their spouses and other representatives to London for a two-day leaders' meeting. The intergovernmental military alliance was established at the signing of the treaty in 1949. Now 29 countries are involved; it exists to protect the people and territory of its members through collective defence. Allies work together every day to preserve peace for one billion people. 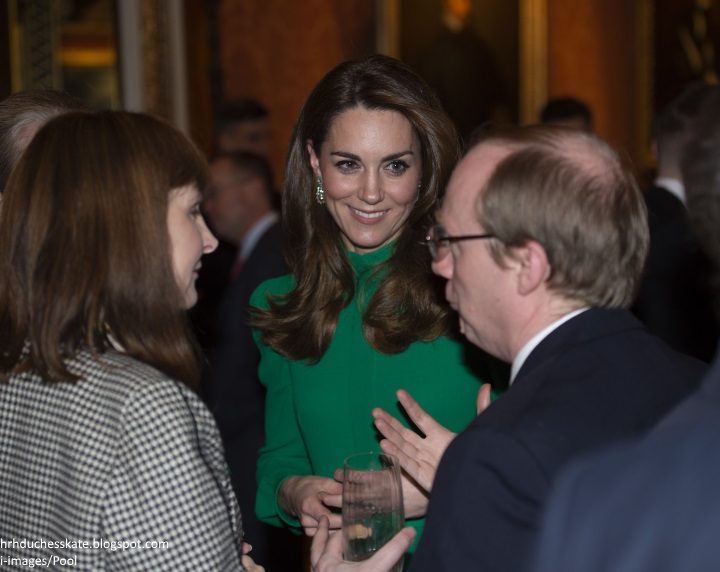 The UK is one of NATO’s twelve founding members and London was home to its first headquarters at Belgravia Square; it's fitting to mark the 70th anniversary in the capital. Lord Ismay made his maiden speech as the first secretary general in the building in 1952. 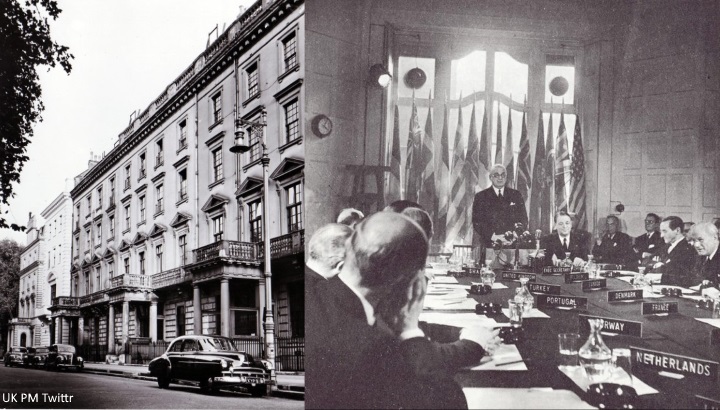 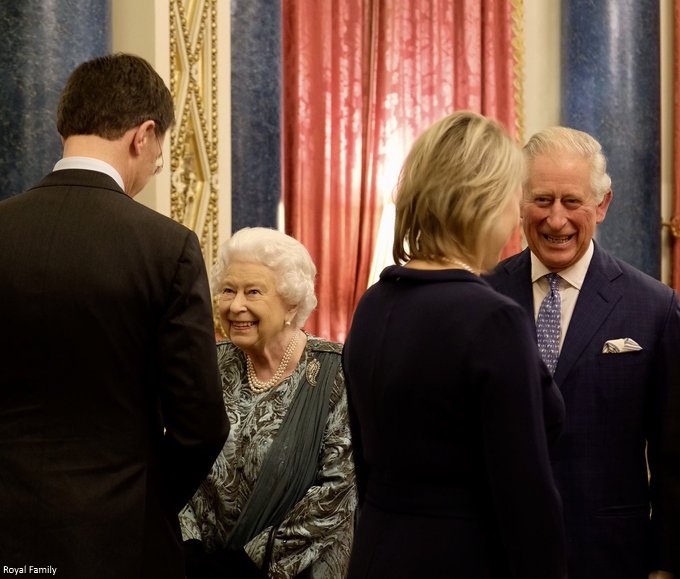 Kate spent time with an array of guests. 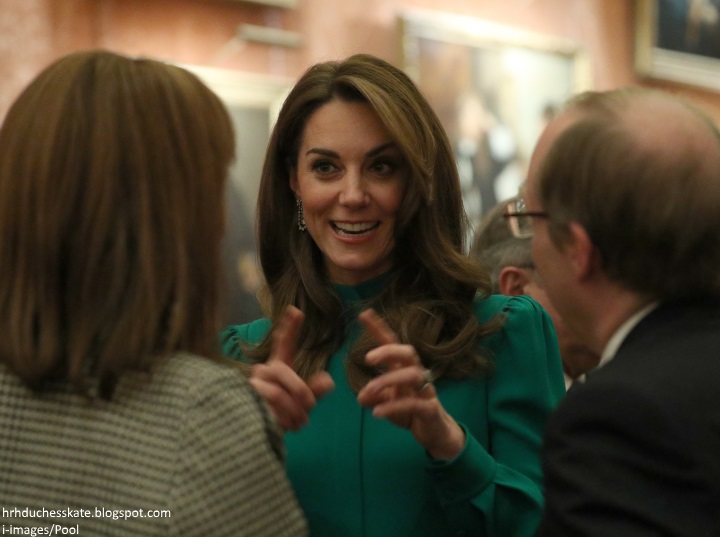 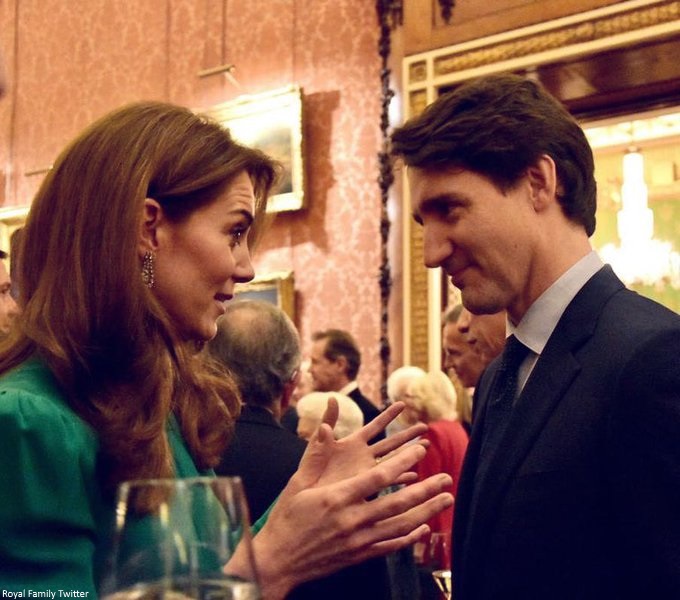 The Cambridges spent time with PM Trudeau and his wife Sophie during their 2016 tour of Canada with George and Charlotte. 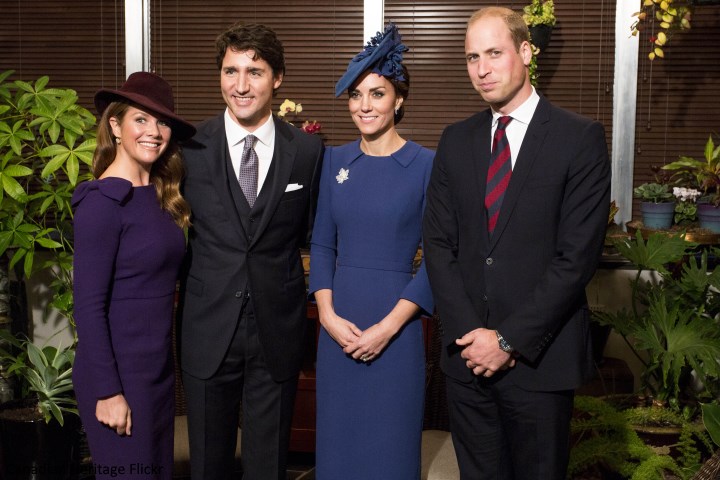 I remember George appeared quite tired upon arrival and rebuffed the PM when he offered a handshake :) 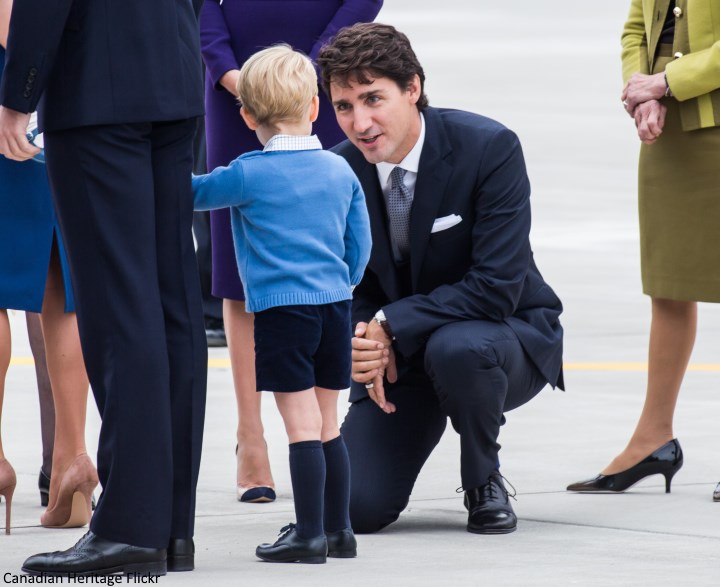 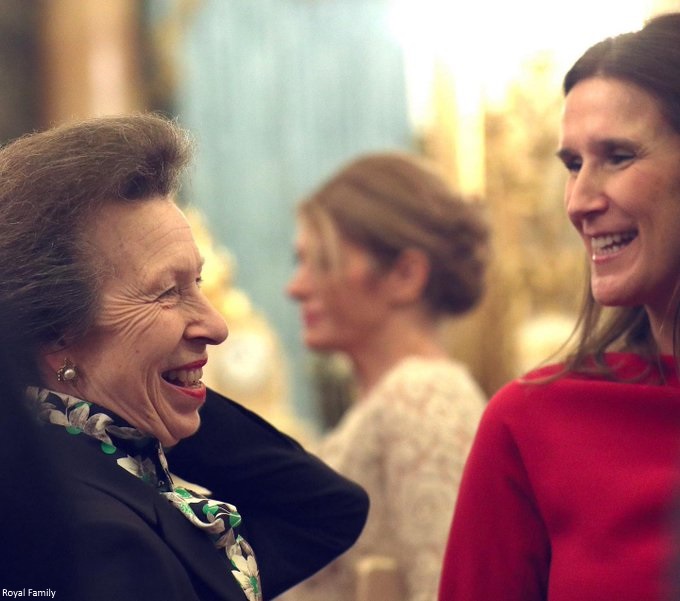 The reception was held in the Green Drawing Room. 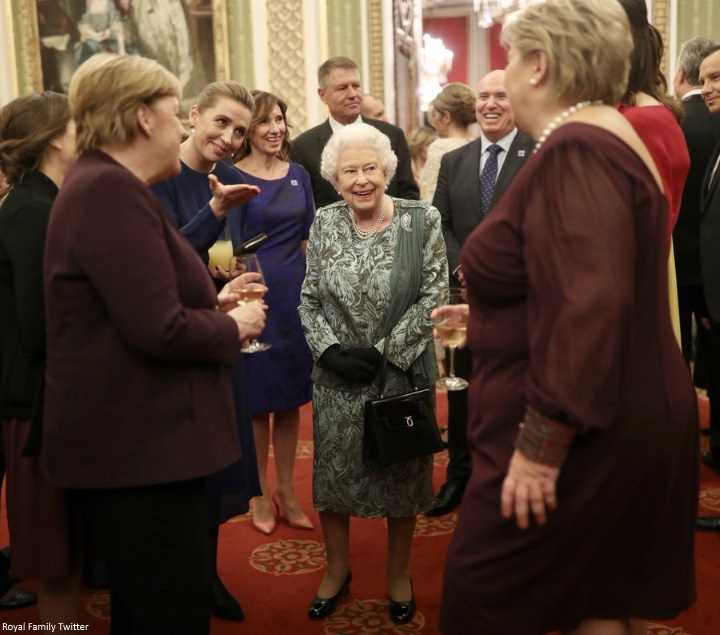 Of course Prince William wasn't with his wife tonight as he's currently undertaking a short official visit in Kuwait and Oman. William's time in Kuwait saw him explore the country's efforts to tackle climate change issues and address environmental challenges through beach cleans, recycling and education. He also attended an event focused on highlighting Kuwait's culture and attended a meeting with His Highness Sheikh Sabah Al-Ahmad Al-Jaber Al-Sabah. 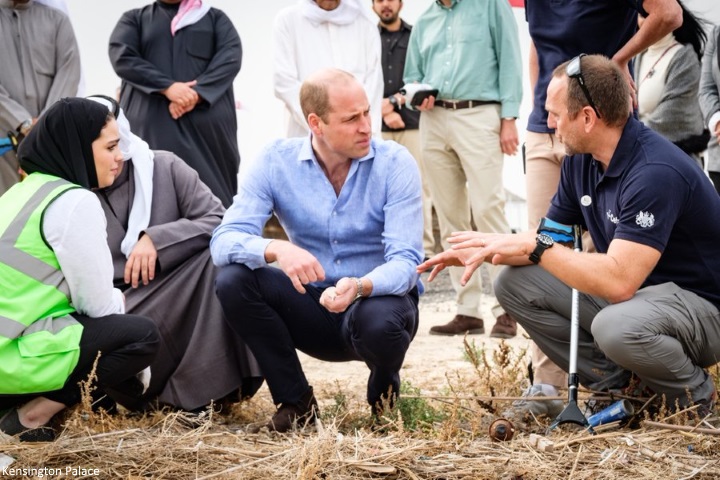 A sea of flags outside Buckingham Palace including the blue NATO flags. 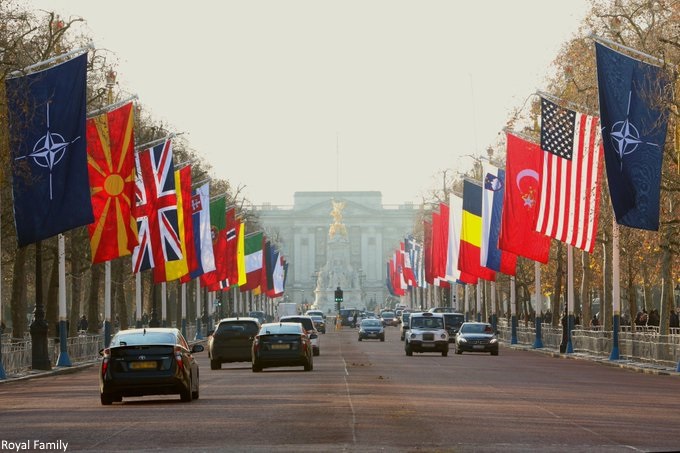 The Palace shared archive footage of Her Majesty and the Duke of Edinburgh visiting the Commander of NATO's Allied Command Operations, General Norstad, in 1957.

Another shot of Kate from Kensington Palace. 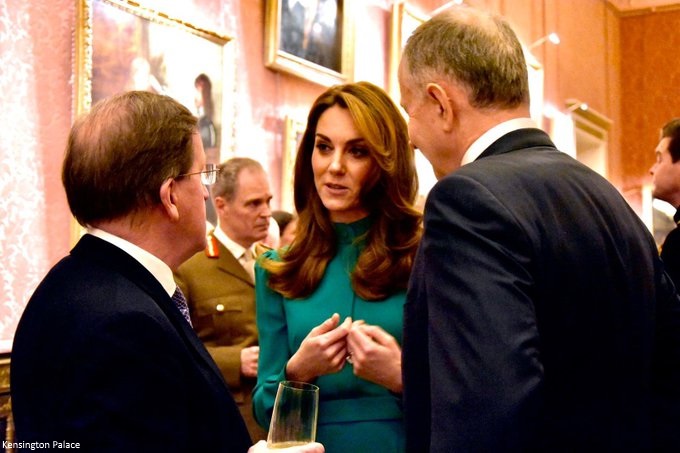 An official portrait of Her Majesty and Prince Charles with the NATO Secretary General and heads of state. UPDATE: Rebecca English reports Kate's green dress was by McQueen, not Emilia Wickstead as previously thought. Music Royal shared a better look via a screenshot from the Mail Online. 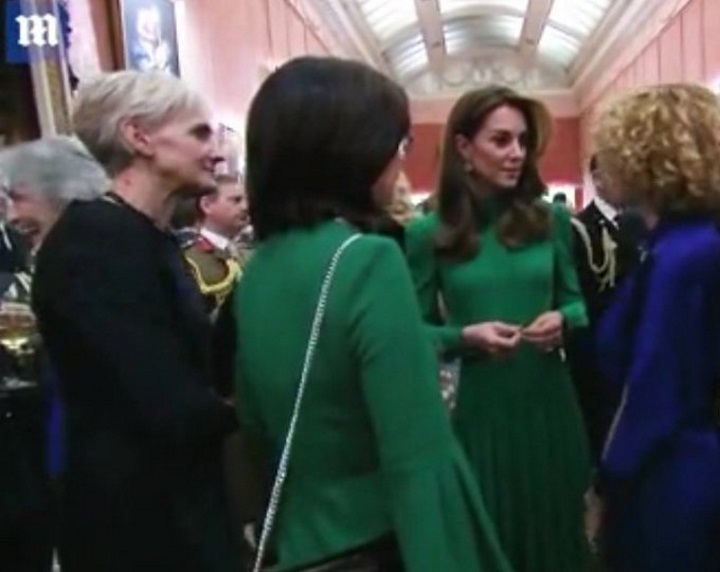 The Duchess accessorised with the Queen's diamond drop earrings she's worn on multiple occasions over the years. 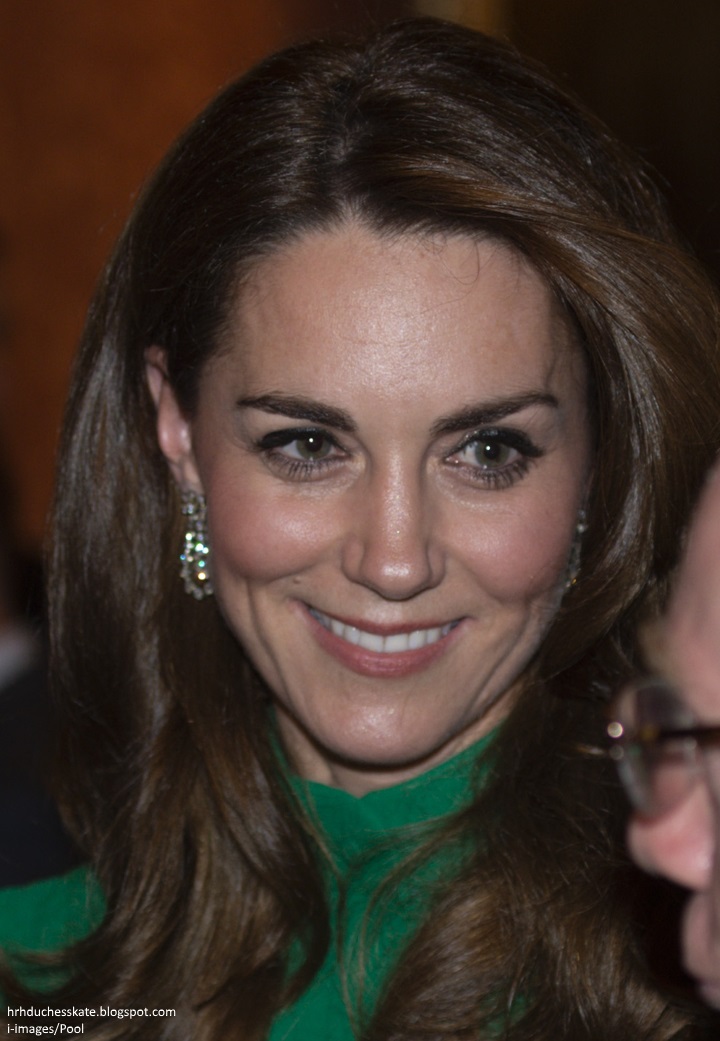 I'll update should additional photos emerge. Often times with Palace receptions, just one photographer is present to cover the event and we see only a handful of photos. Kate's next scheduled engagement is on Wednesday for the white-tie Diplomatic Reception.
Posted by Admin at 21:43:00