It was an afternoon of festive fun as the Duchess of Cambridge joined a group of children supported by Family Action at Peterley Manor Farm in the village of Great Missenden in the Chiltern Hills in Buckinghamshire. 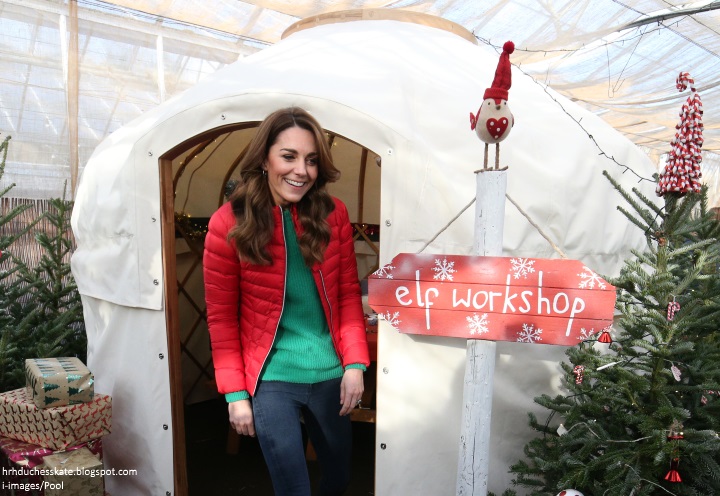 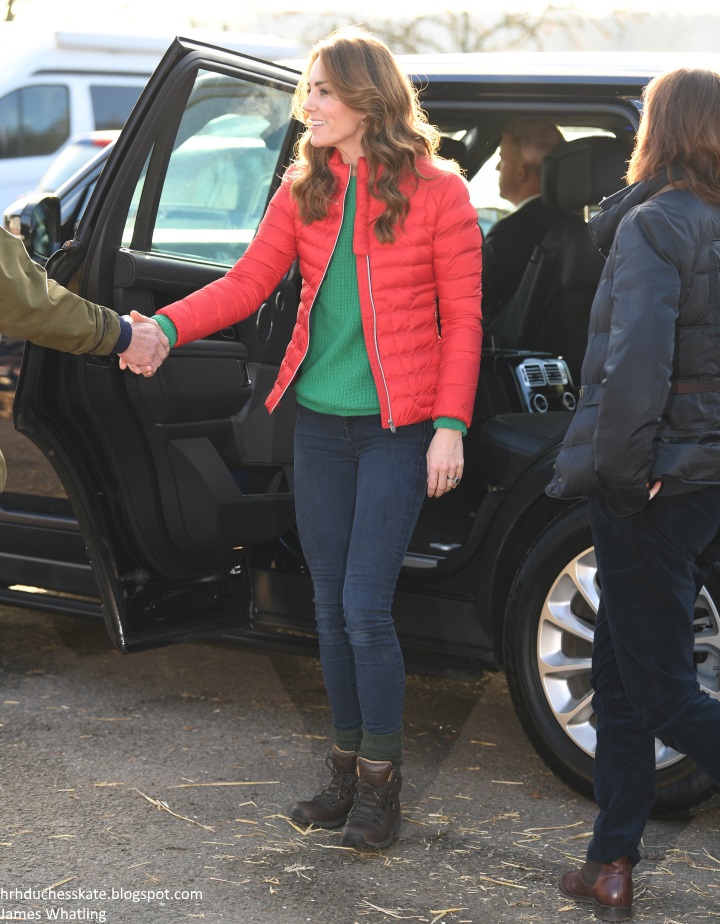 The engagement coincided with news the Queen has passed her patronage of Family Action to her granddaughter-in-law after 66 years in the role. The organisation is steeped in family history. Before the Queen became patron, her grandmother Queen Mary officially supported the organisation. It's terrific to see another royal carrying on the tradition. Perhaps someday, long in the future, we'll see one of Kate and William's children working with them. 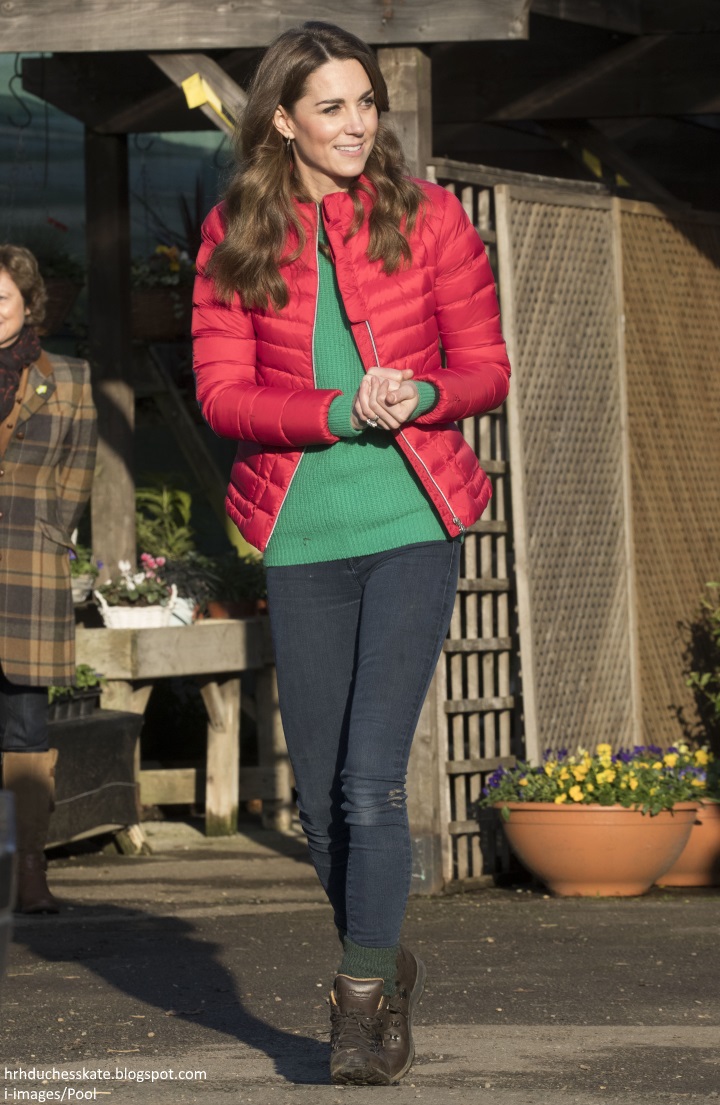 Family Action, which celebrated 150 years in 2019, supports vulnerable children and families through some 150 local and national services, as well as supporting professionals and organisations through training and consultancy. They currently work directly with over 45,000 families. Kate first visited the charity in 2017 and again in January to launch their new national support line. At the time, I noted it would make a great future patronage. I imagine the handover has been in the planning for some time. 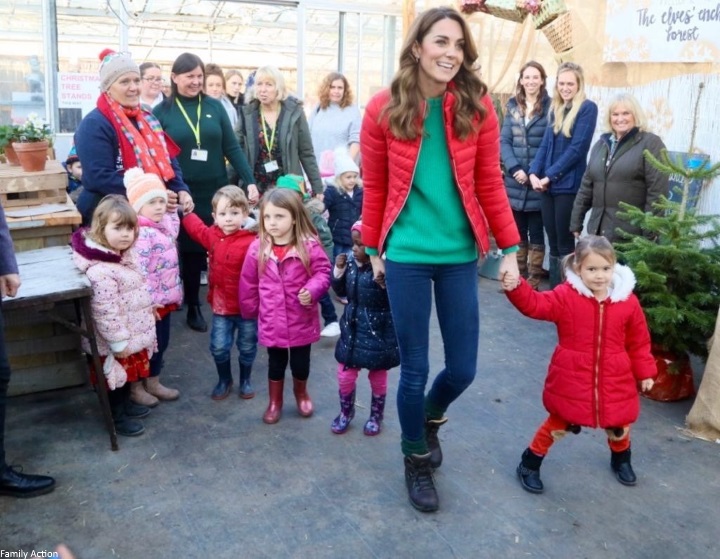 In a statement, Kensington Palace said: "The Duchess of Cambridge has spent much of the last eight years meeting charities and organisations who work every day to make our families and communities stronger. There is a powerful correlation between a parent or carer’s wellbeing and their child’s development, which is why organisations such as Family Action that provide support are instrumental to a child’s future. This new patronage aligns with Her Royal Highness’ longstanding work on the early years, and the importance of supporting children and families during this seminal period of their lives." 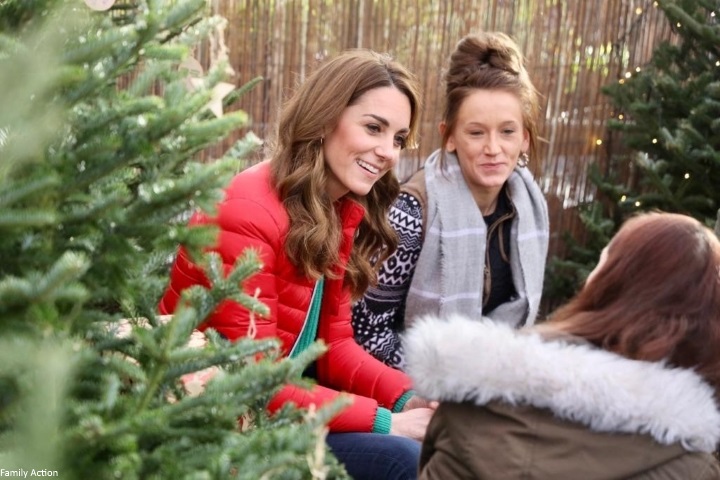 'On behalf of the Board of Trustees and everyone at Family Action, I am delighted to announce that Her Royal Highness The Duchess of Cambridge will become Royal Patron of Family Action in our 150th Anniversary year. The Duchess will assume the Royal Patronage of the charity from Her Majesty The Queen who has held the role for 66 years, having assumed the role in turn from Queen Mary in 1953.

We would like to extend our most sincere thanks to Her Majesty for her steadfast and dedicated support for the work of the Charity over so many years. Family Action was founded in 1869 to help disadvantaged families in difficulty to move forward by giving them practical help and support.

Today, Family Action continues to tackle difficult issues facing families – including financial hardship, mental health and emotional wellbeing, social isolation, parenting challenges, domestic abuse, and substance misuse. These issues can have a huge impact on the stability of family life as well as on the health and wellbeing of all family members.

We are honoured that The Duchess has chosen to support Family Action’s work by becoming our Royal Patron. Her keen interest particularly in the Early Years fits well with Family Action’s provision of high quality perinatal mental health services, pre-schools and Children’s Centres across the country. Family Action looks forward to working with The Duchess in the years to come.'


There is an excellent timeline of events charting the history of the organisation here. There's also a YouTube video available here, with experts and speakers chronicling the issues which brought about the organisation and its role today.


During the visit Kate helped the children pick out Christmas trees for their schools. 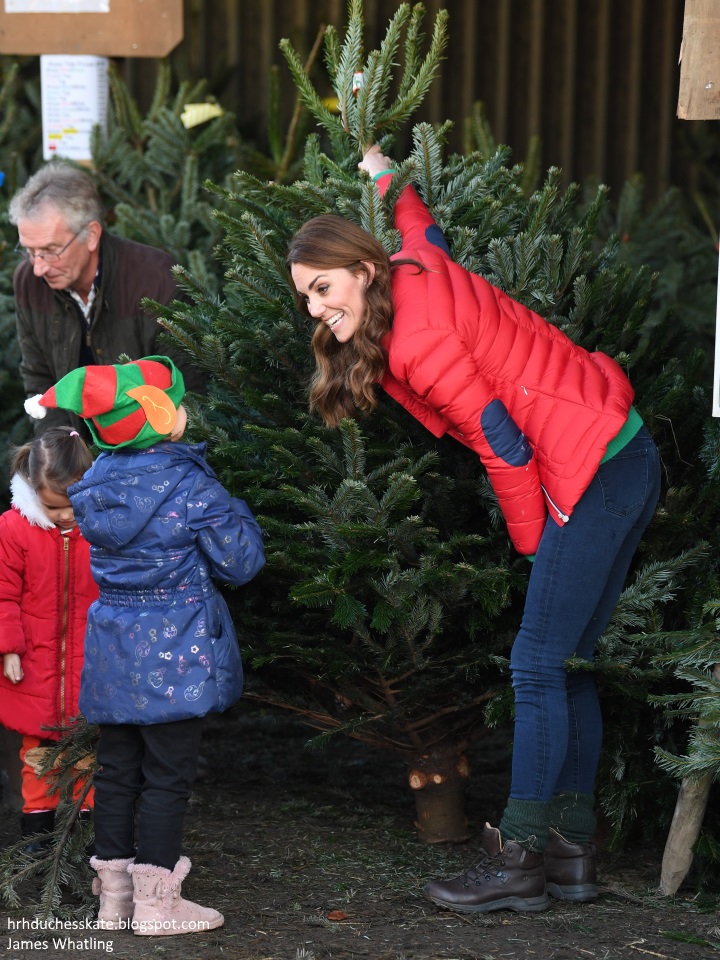 Joined by an eager group of little helpers, it was time to get to work. 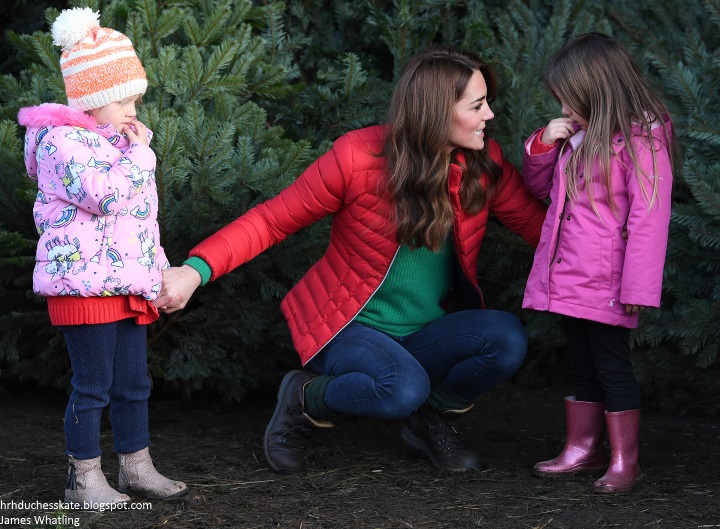 Kate asked them to choose their favourites. This one got a thumbs up from Kate. 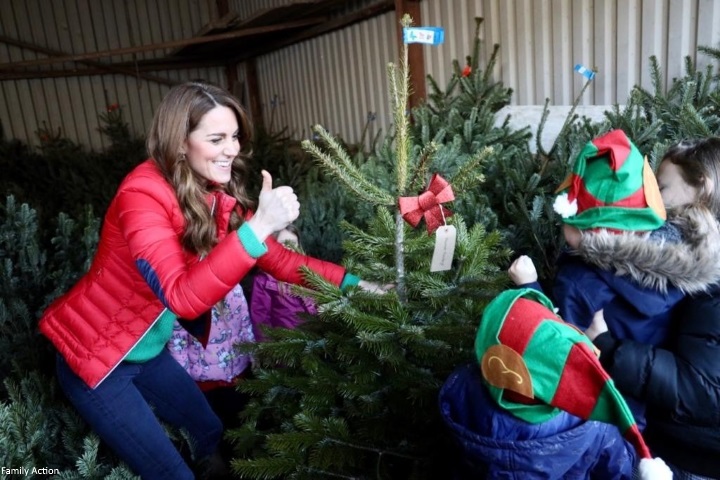 Kate was very much in the spirit of it and started carrying the trees out. Simon Perry said Peterley Manor Farm owner Roger Brill joked "I will have to give her job at the weekend". 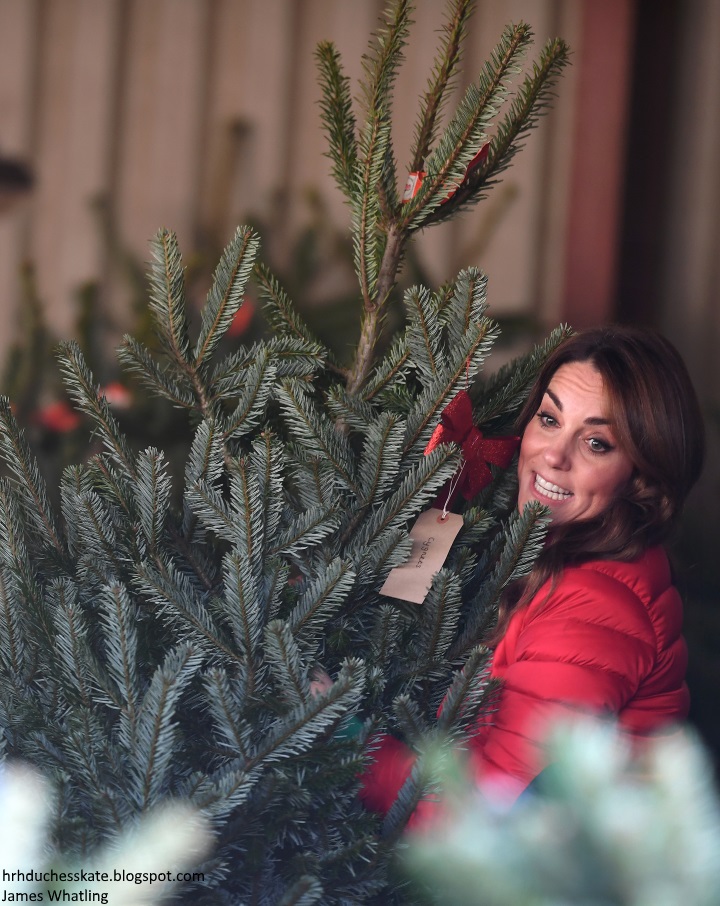 'It was while she was in an Elf Workshop with several children, that little Freddie leant in to get his photo taken by a photographer, who had just joined them. Kate couldn't help but giggle as she chatted away to the children, asking them what they wanted for Christmas. When one little'un responded that he wanted a dinosaur, she sweetly asked: "Which one, a diplodocus or a T-rex?"

Kate then spoke with another three children about Christmas, asking: "How tall is your Christmas tree?" Hilariously, one child threw his hands above his head to demonstrate just how tall his tree was. Moving outside, the children pretended to feed wooden reindeers and Kate helped them put ribbons on the Christmas trees that they liked most.' 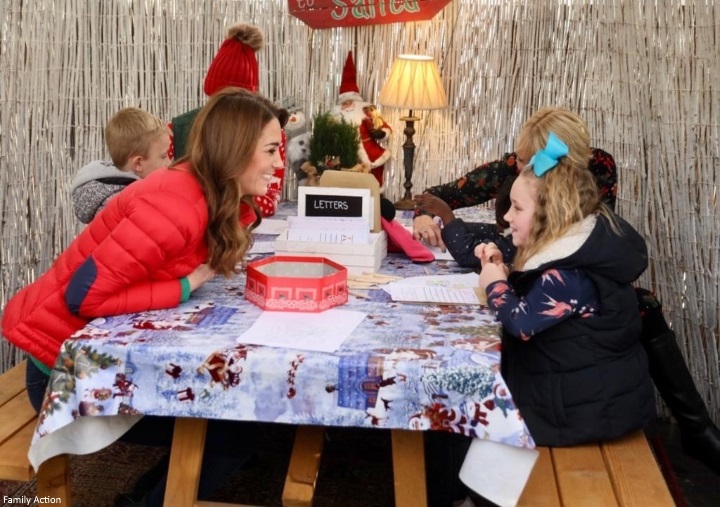 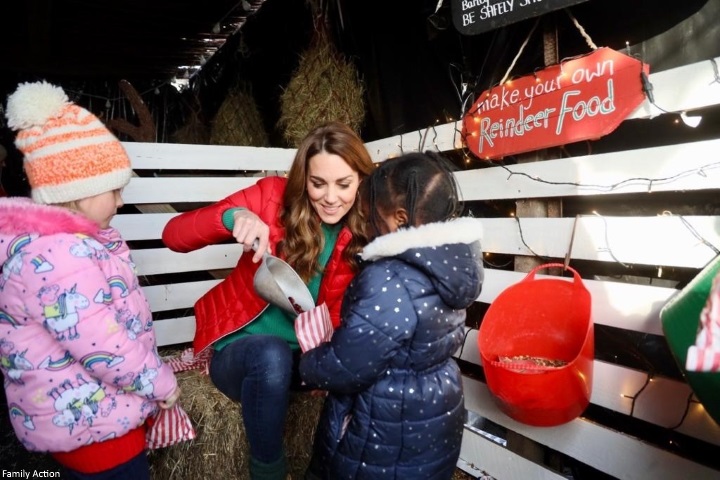 Roya Nikkhah reports Kate told the children George "loves thistles", adding they have a Nordmann Fir non-drop Christmas tree at Anmer Hall. She also said Louis "wants to go everywhere" with her. Roya said the Duchess spoke to parents separately about pressures at this time of year "Maybe instead of posting on social media about who has the bigger presents, tell people about the real meaning of Christmas instead."

'David Holmes, the chief executive of Family Action and a member of the Early Years steering group set up by Kate to advise on way forwards in the sector, told PEOPLE that Kate was “lovely” during Wednesday’s outing.


After finishing their letters to Father Christmas, Kate helped post them to the North Pole :)

Time to scout out the perfect trees for @family_action pre-schools, before heading back inside for hot chocolate! 🎄 pic.twitter.com/xz1kOGOqwU
— Kensington Palace (@KensingtonRoyal) December 4, 2019

The Duchess was festive in a casual red and green outfit for the visit. 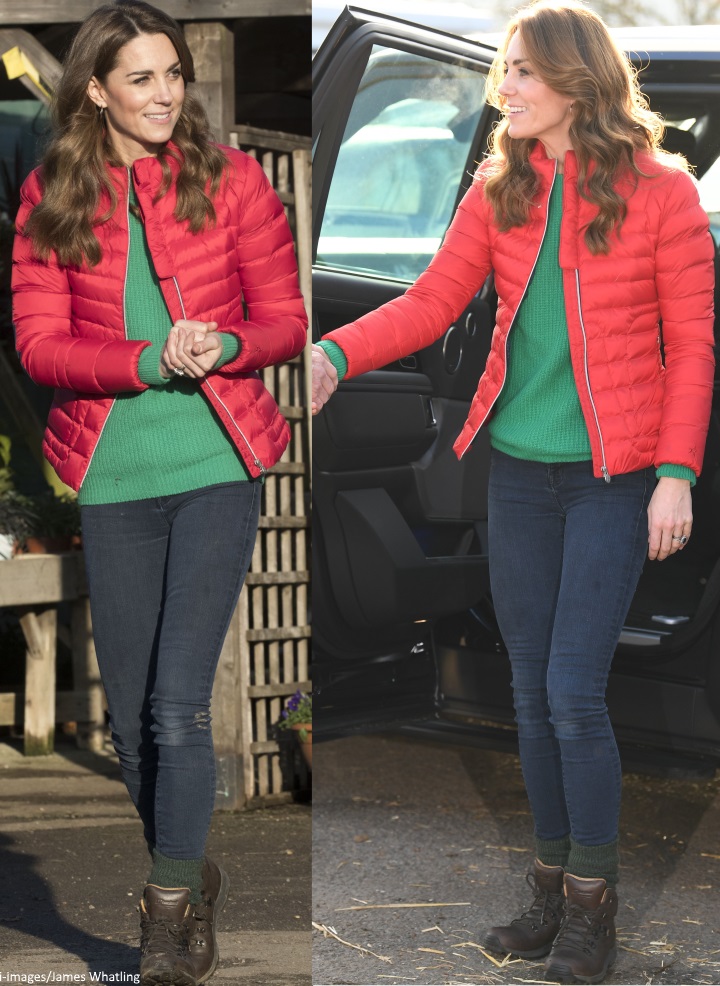 Kate brought back her Perfect Moment Mini Duvet Quilted Ski Jacket. The $450 jacket is cut from mid-weight durable Airtastic EX shell, it's padded with insulating down, has a protective high neck and is finished with soft ribbed cuffs to lock in warmth. It features distinctive navy elbow patches. 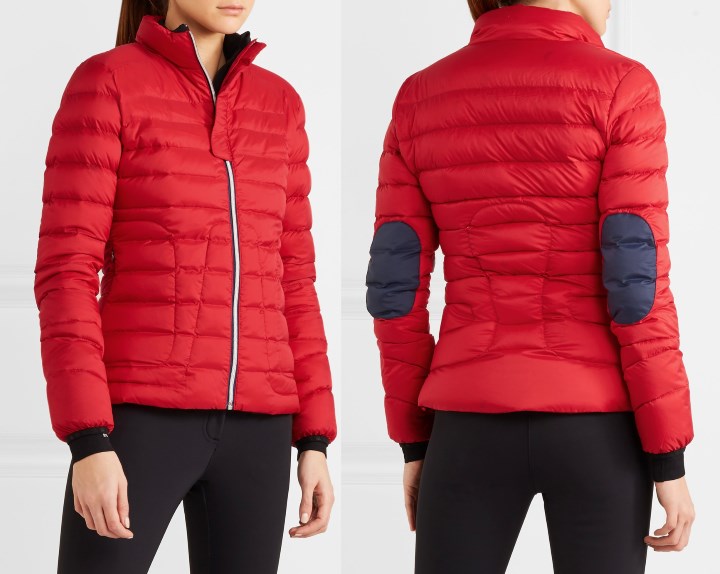 Kate first wore the jacket for a Heads Together run in 2017. 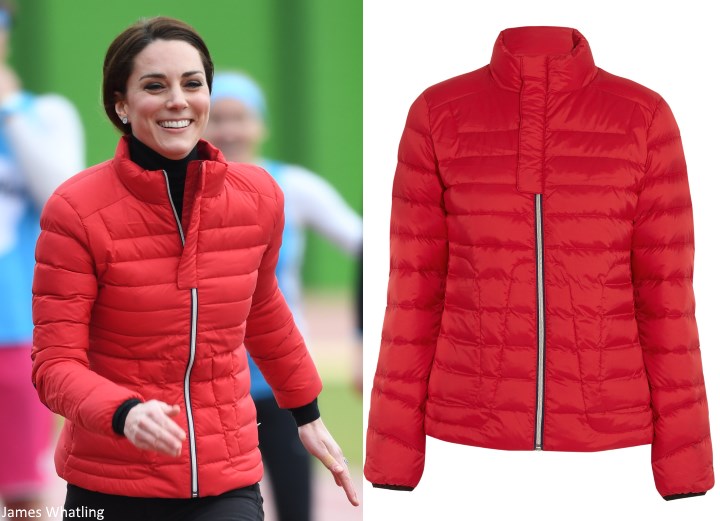 It appears Kate's emerald green ribbed crew neck jumper is by Really Wild Clothing (with thanks to Pop Golightly). 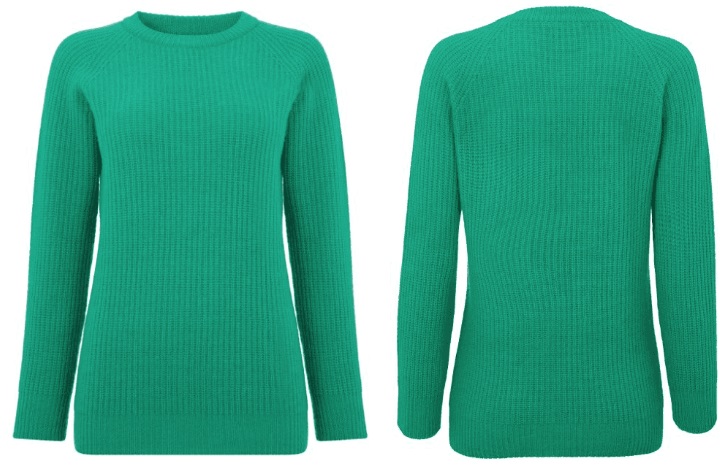 Kate accessorised with a pair of hoop earrings. 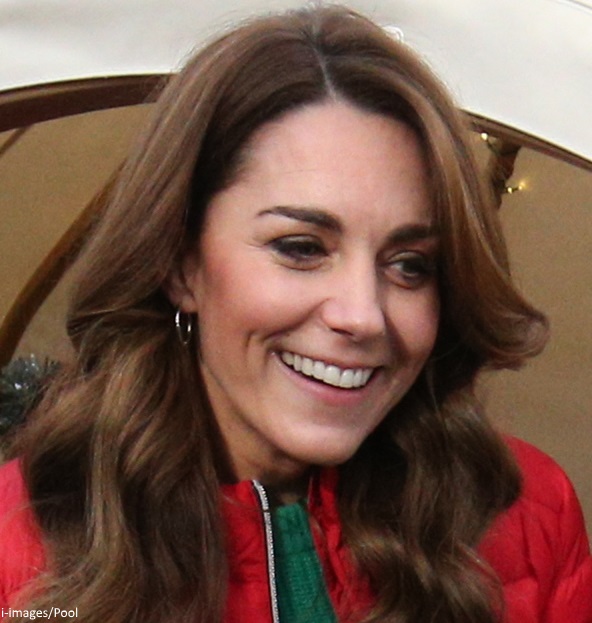 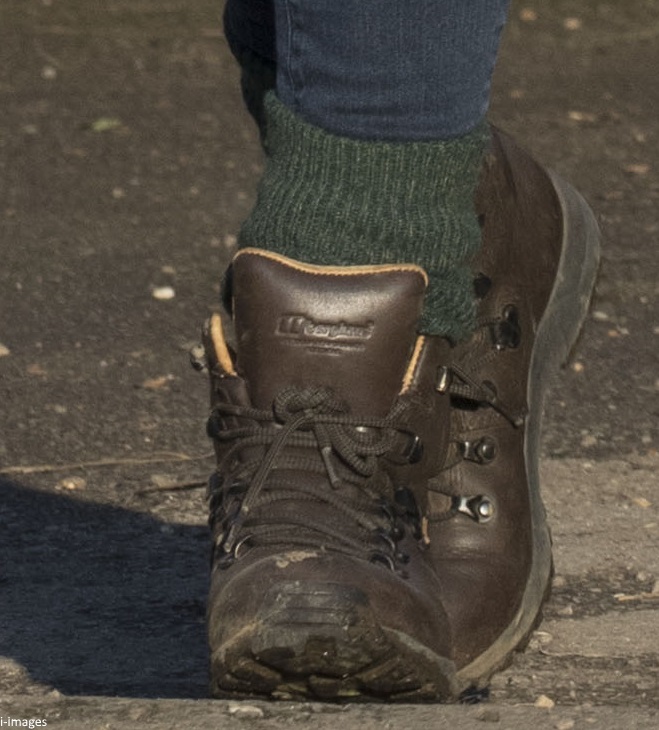 The Duchess also wore a pair of skinny jeans. It looked like a fabulous visit for all involved and a splendid new addition to Kate's patronages.

Kate was not the only Middleton lady focused on Christmas trees today. Party Pieces shared a photo of Carole dressing the office tree with the caption "Working next door to a Christmas Tree farm means we had the pick of the best Xmas trees!" 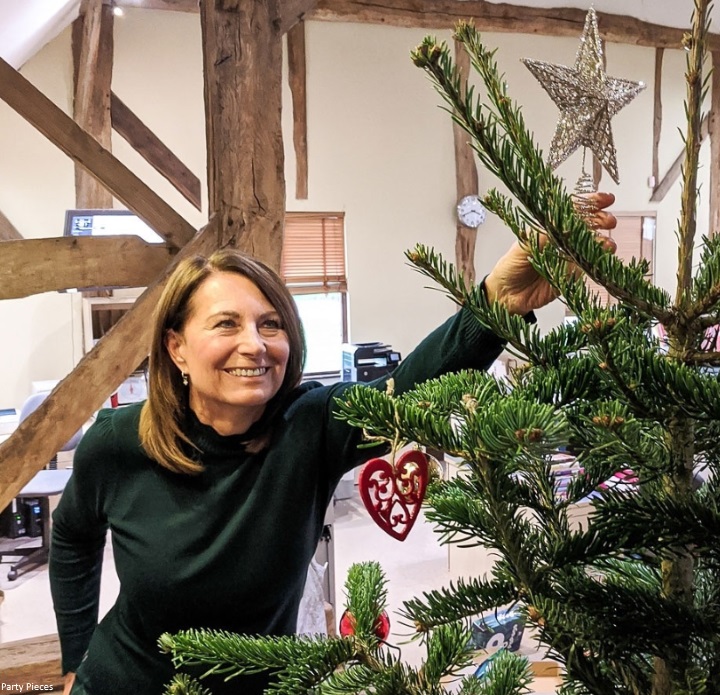 We'll see Kate next Wednesday night for the (tiara filled) Diplomatic Reception.
Posted by Admin at 13:17:00