It was a night of regal sparkle at Buckingham Palace for the annual Diplomatic Reception. 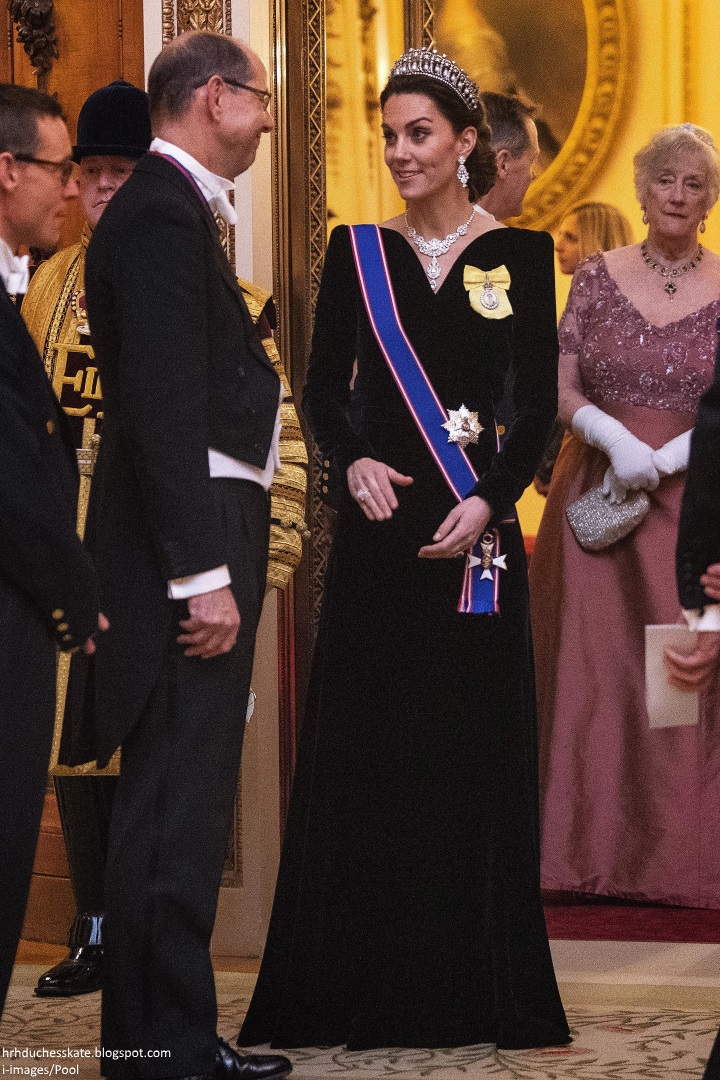 The Duke and Duchess of Cambridge joined the Queen, the Prince of Wales and the Duchess of Cornwall for the annual white-tie event at Buckingham Palace. Hosted by Her Majesty, the reception is one of the most glittering events on the royal calendar with tiaras, jewels and royal orders on display. 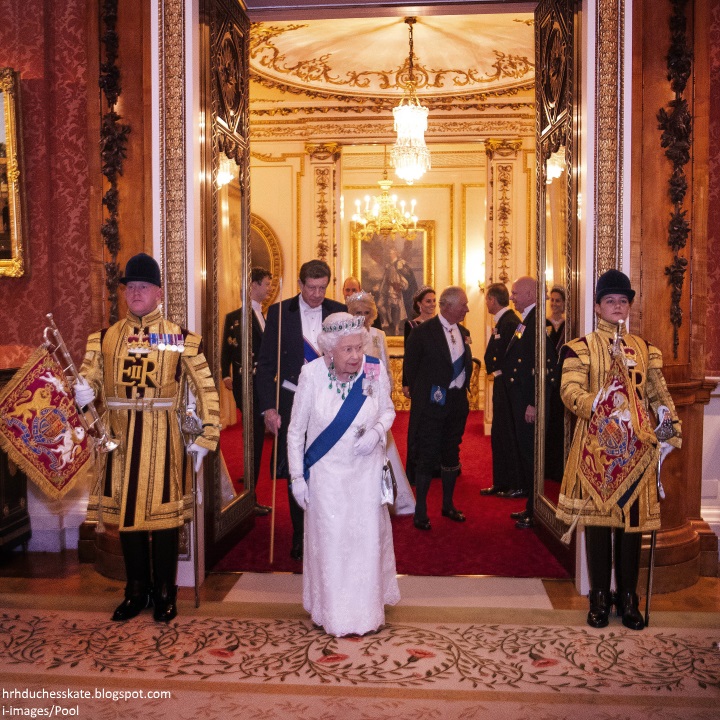 William and Kate were photographed leaving Kensington Palace shortly after 8 pm. Unlike previous years, there was a screen on the window, which meant the quality of images was greatly impaired. Luckily we didn't have to wait long for photos from inside. 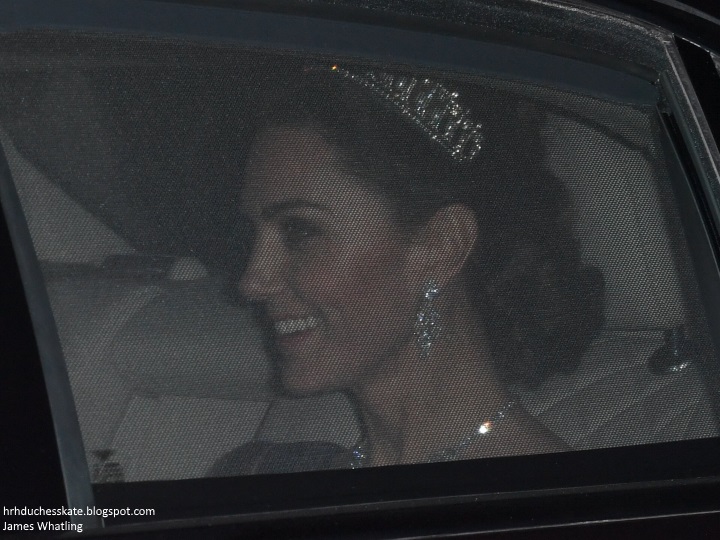 Carole Middleton was spotted arriving to look after the children shortly before they left. 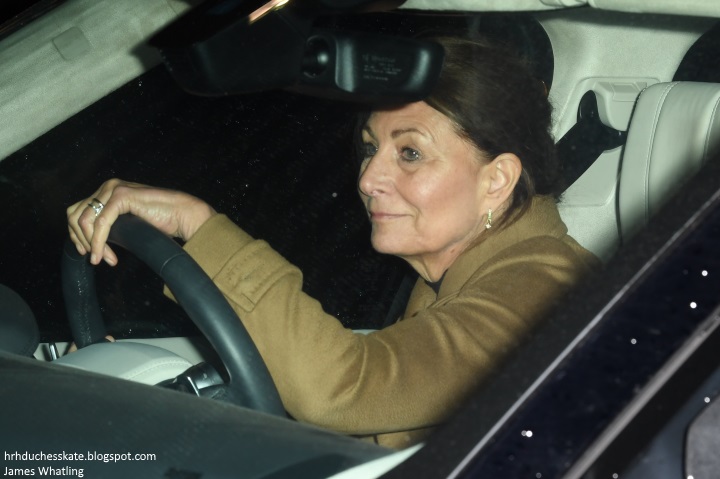 For years we only saw arrival photos of the Duchess offering a brief glimpse of the tiara and colour of the gown. Last year heralded a major change in tradition with a pool photographer invited to cover the event and a number of high-resolution images made available afterwards. Unlike previous generations, there are only a handful of occasions on the calendar where we see the royals in full regalia. For William and Kate, it is State banquets and the Diplomatic Reception, so it's wonderful to get a proper look inside the reception now. The decision to share coverage was very much seen as another sign of Her Majesty passing over responsibilities to Prince Charles. 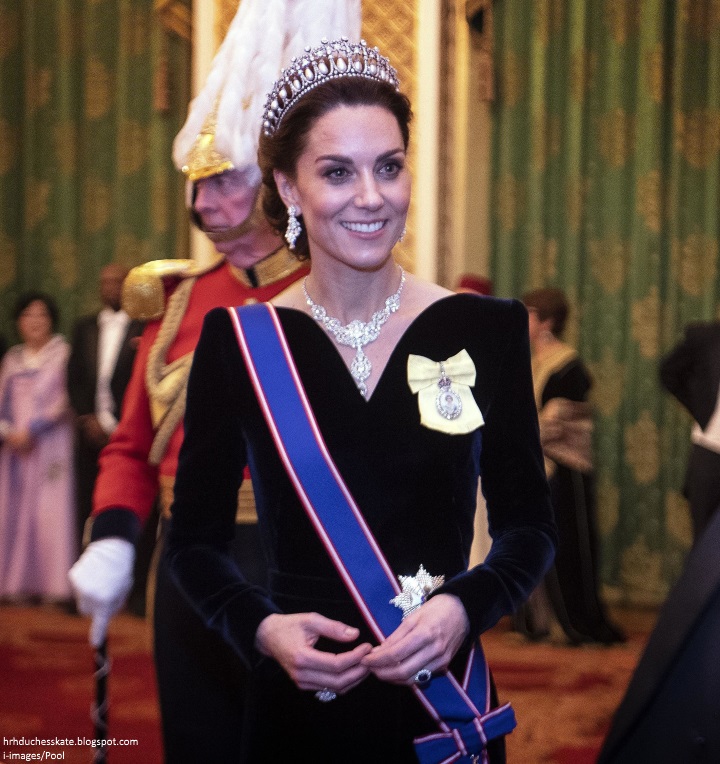 There are over 170 foreign missions accredited to the court of St James's in London (St James's Palace is still the senior palace and official residence of the sovereign). Each year Her Majesty throws a reception in their honour and members of the Royal family in attendance make a point of meeting with each one. 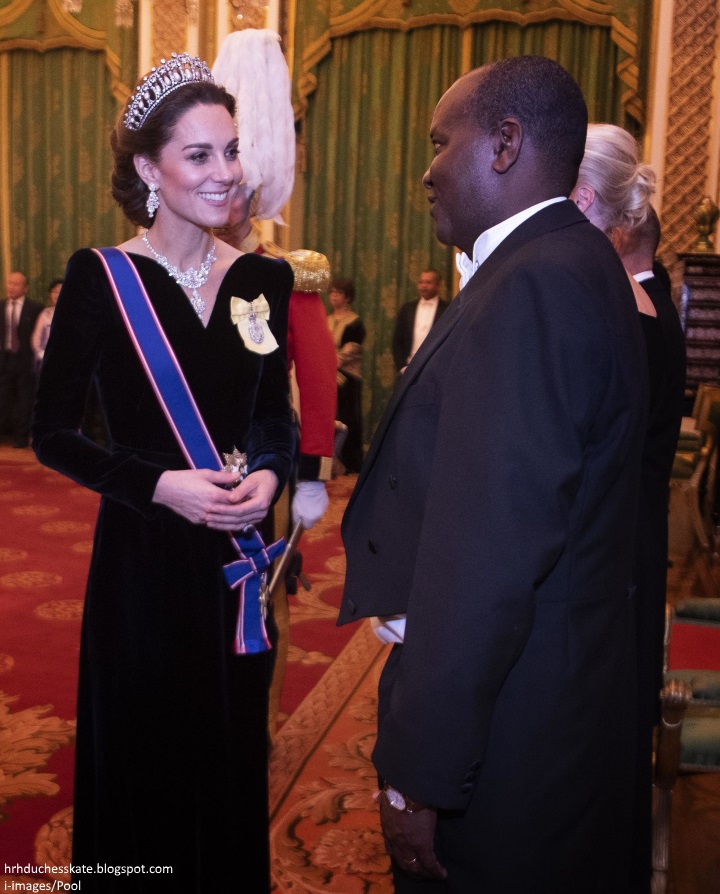 Guests were welcomed to the palace ballroom. At 36.6m long, 18m wide and 13.5m high, the ballroom is the largest multi-purpose room in Buckingham Palace. It was opened in 1856 with a ball to celebrate the end of the Crimean War. It is used by the Queen for State banquets. Below, William appeared to be having a very interesting conversation with a guest. 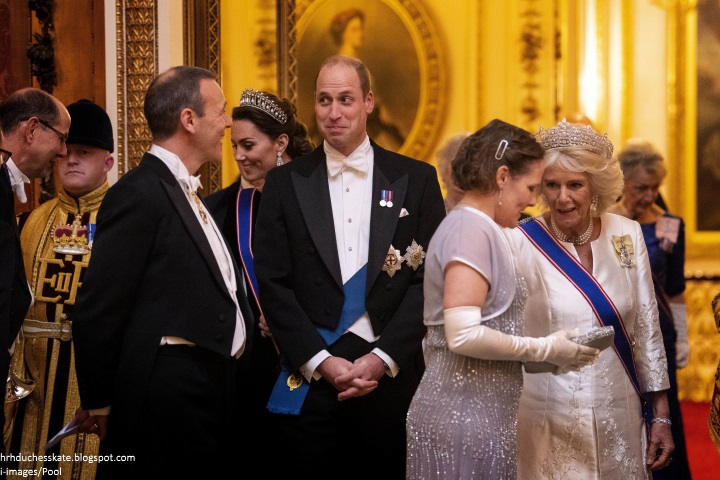 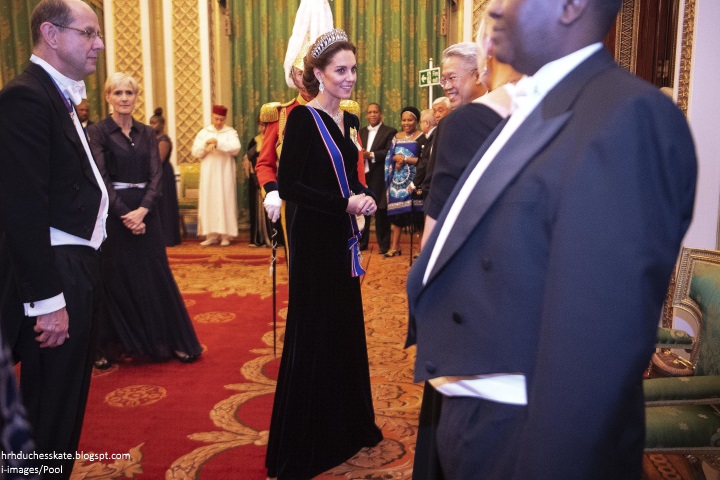 Her Majesty was regal in a gown by Angela Kelly and the Vladimir tiara with emerald and diamond drop earrings. According to royal jewellery experts the Queen's spectacular emerald necklace is new. 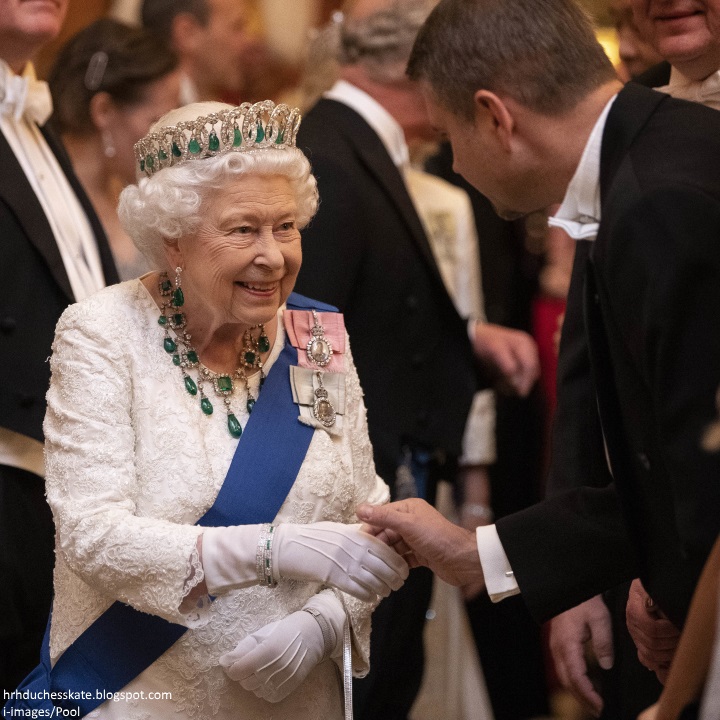 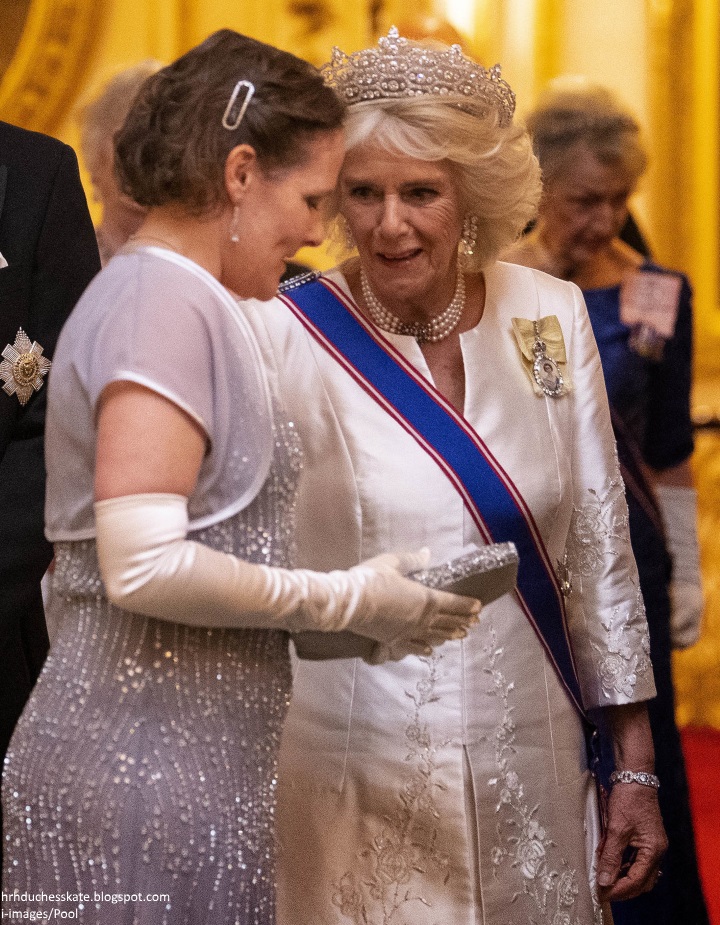 The Duchess of Cambridge looked every inch a future queen in dazzling jewels and an Alexander McQueen navy velvet gown. 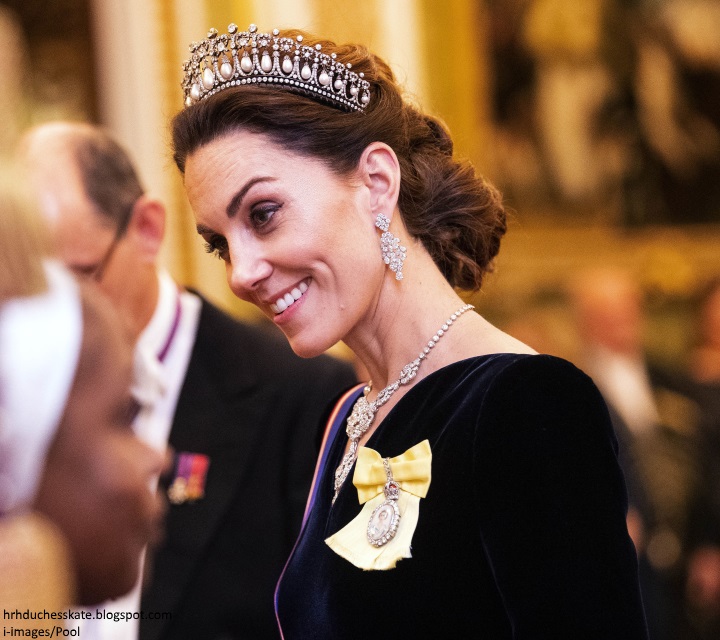 The piece features a v neck, structured shoulders and a fitted floor-length silhouette. 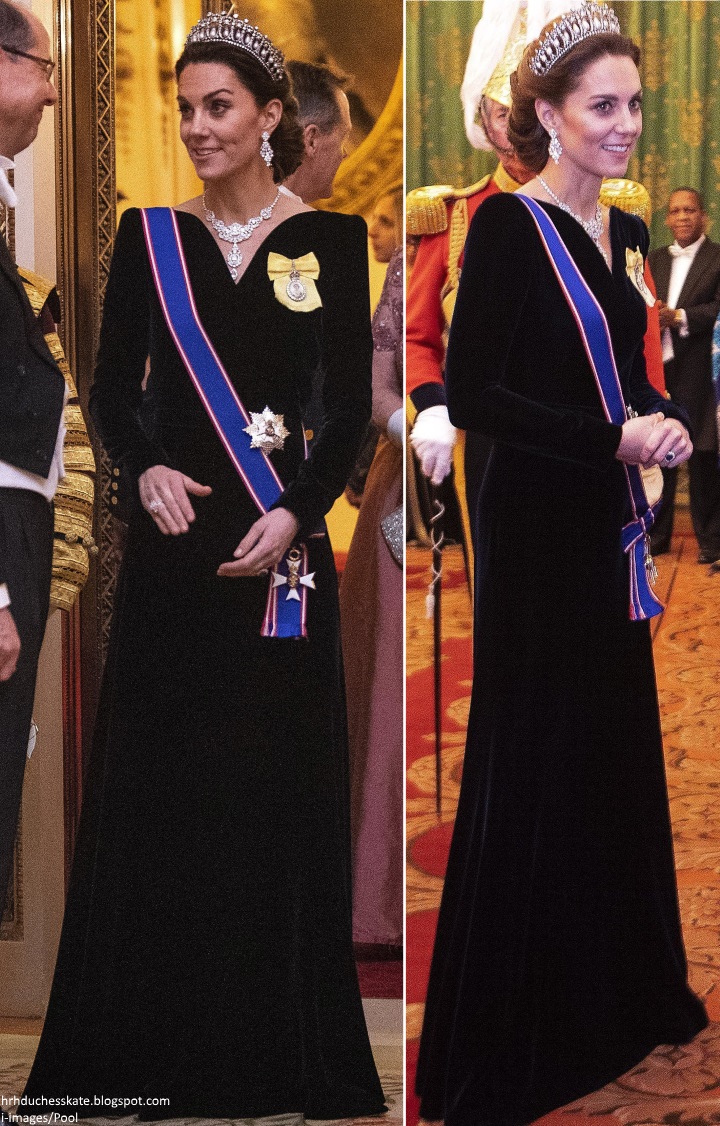 Kate's gown appears to be a custom version of the £6,000 Bejeweled Long Sleeve Illusion Gown. Made in Italy, it is described as "a stunning stretch jersey gown with sheer lace panels at the waist and back finished with an opulent jeweled back panel". Kate's piece is navy velvet and doesn't have the sheer panels or back. 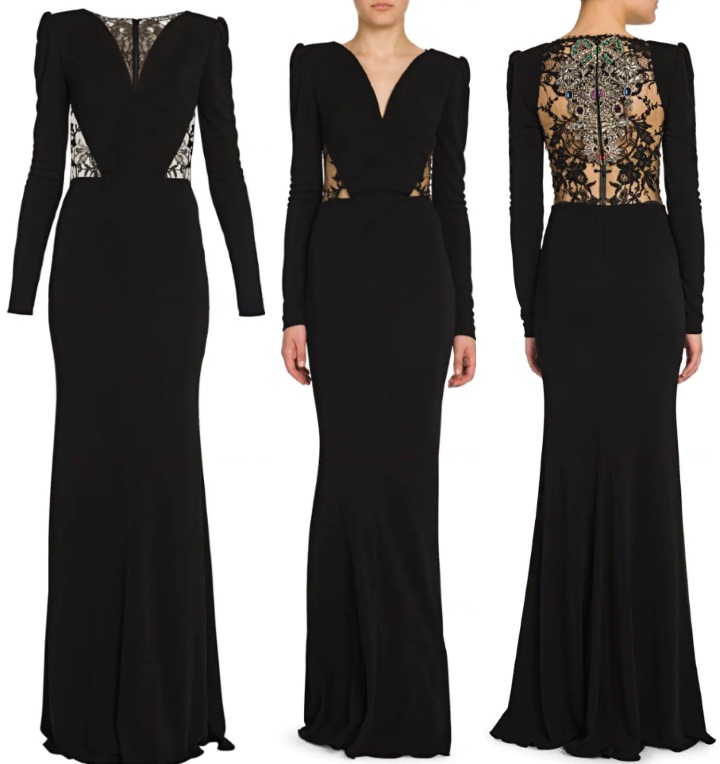 It is not the only royal navy velvet gown making headlines today. This morning it was revealed the iconic off-the-shoulder midnight Victor Edelstein evening dress Princess Diana wore when she danced with John Travolta at White House has been purchased by Historic Royal Palaces for £264,000 and will feature in royal exhibitions. It will join a treasure trove of over 10,000 items of historic dress from the 16th century to the present day. Read more about it on the HRP website. Once again this year Kate selected the Lover's Knot tiara. I know many of you were hoping to see a different one, though I would be surprised if we see Kate's rotation altered from the Lover's Knot and the Lotus Flower tiara until she's Princess of Wales. I've long adored this one, as it was Diana's defining tiara and steeped in royal history. I expect we'll see it throughout Kate's life. 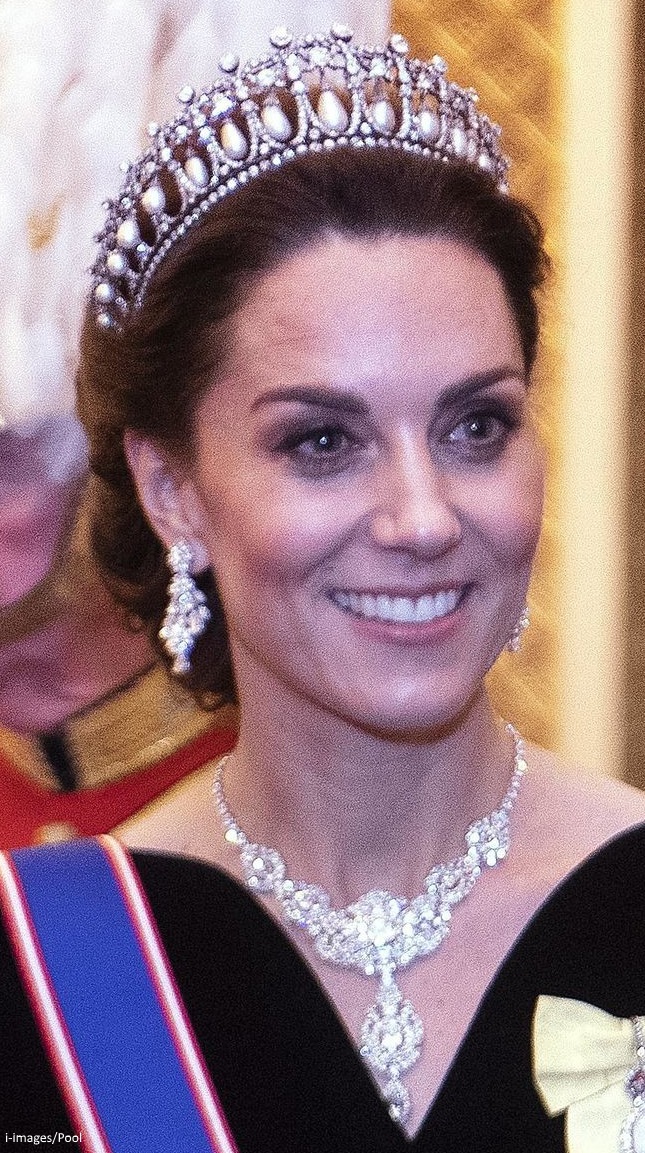 The tiara features elements of the Gothic Revival style. The circle of the Lovers Knot is made up of a lower semi-circular band, set with a row of brilliant cut diamonds. Where two adjacent arches meet, a pillar-like structure is formed that rises up and ends in a round diamond, forming a diamond spike. There are nineteen diamond spikes of this nature and the size gradually decreases from the centre towards both ends. 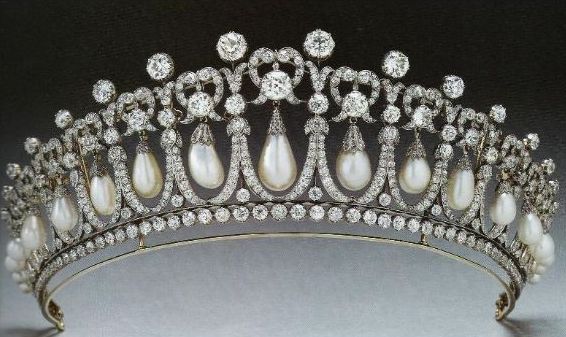 Readers will recognise Kate's Nizam of Hyderabad necklace which the Duchess was previously loaned for the 2014 Portrait Gala at the National Portrait Gallery. 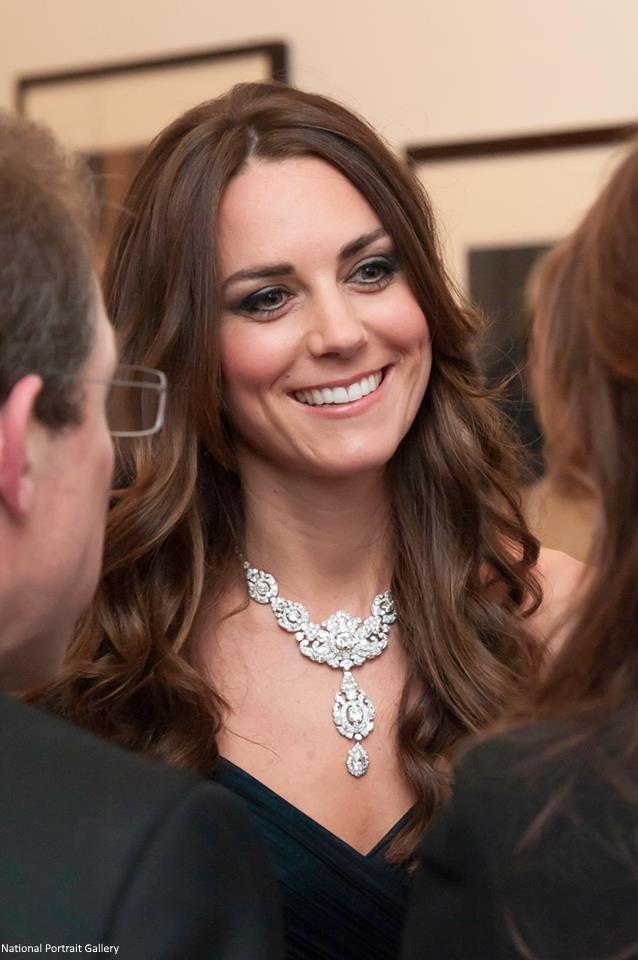 The dazzling necklace was given to Her Majesty as a wedding gift in 1947 by the Nizam of Hyderabad, then king of a state in India. The Nizam was the owner of one of the most celebrated and largest private jewellery collections in the world. Below we see the Queen (then Princess Elizabeth) wearing it for a portrait by Dorothy Wilding in 1952. 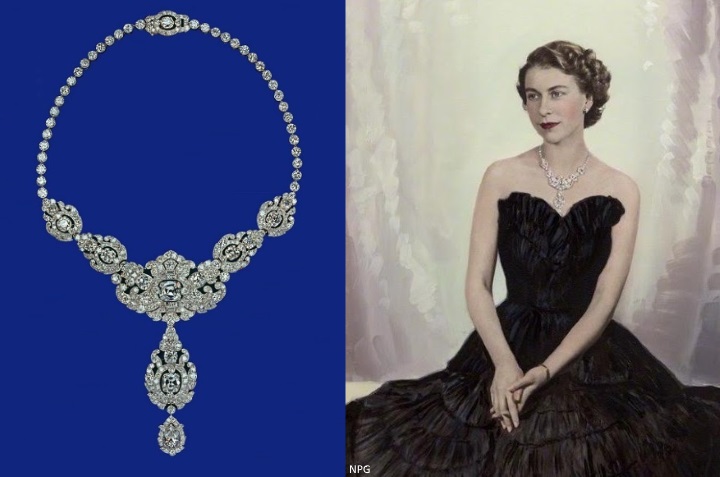 'The necklace was purchased from Cartier. Actually, in a way it was acquired by Elizabeth herself; the Nizam wasn't in London at the time and left Cartier instructions that the Princess would personally choose her present. It consists of a long chain of 38 diamonds with a diamond-encrusted strap. The centre of the necklace is pave-set with detachable double-drop pendant 13 emerald-cut diamonds and a pear-shaped drop.'


And dazzling diamond earrings, almost certainly from the royal collection. Emma suggests they are from the Diamond Chandelier Drop Demi-Parure. In recent times, they have been worn by the Countess of Wessex. Kate also wore a statement ring for the evening. 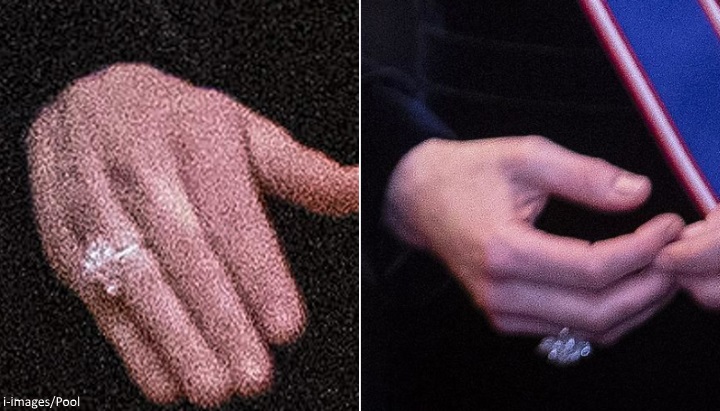 Kate wore her Royal Family Order, and the riband of a Dame Grand Cross of the Royal Victorian Order. It comprises of a blue sash with red and white trim, a cross and star. The Queen bestowed it on Kate to mark her and William's 8th wedding anniversary. It's an enormous honour and awarded in recognition of services to the sovereign. 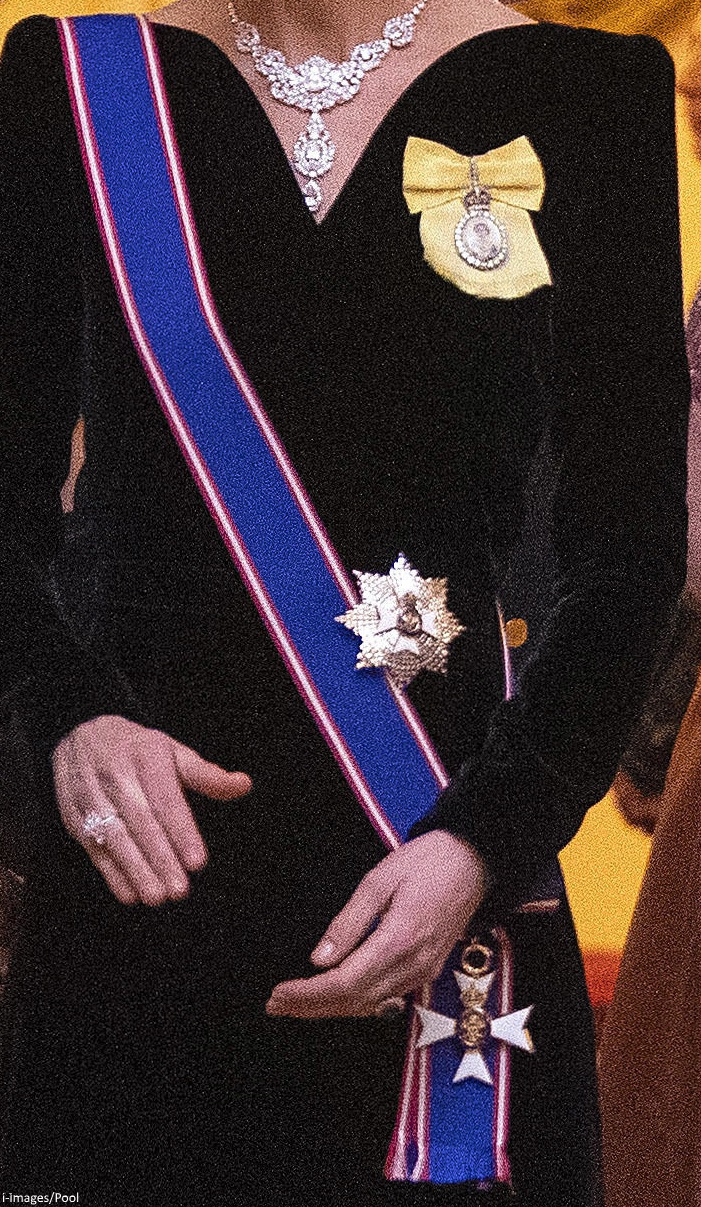 What do you think of the looks and jewels on display for the night?

A reminder: A Very Berry Christmas airs on BBC One at 8.30 pm Monday night. We'll also see the Queen's pre-Christmas luncheon at some point next week, likely Tuesday or Wednesday.
Posted by Admin at 20:25:00