Good evening, dear readers! As you may have heard the Duchess of Cambridge did not join her husband at the annual Tusk Awards tonight "due to the children". Kensington Palace did not clarify the reason, expand on whether or not one or more of the children are under the weather or if it's related to another matter entirely. The rumour mill has gone into overdrive about an imminent pregnancy announcement for Kate. Whilst this is certainly possible, I do not believe it's the reason for her absence as earlier today she joined a private tea and reception for finalists. 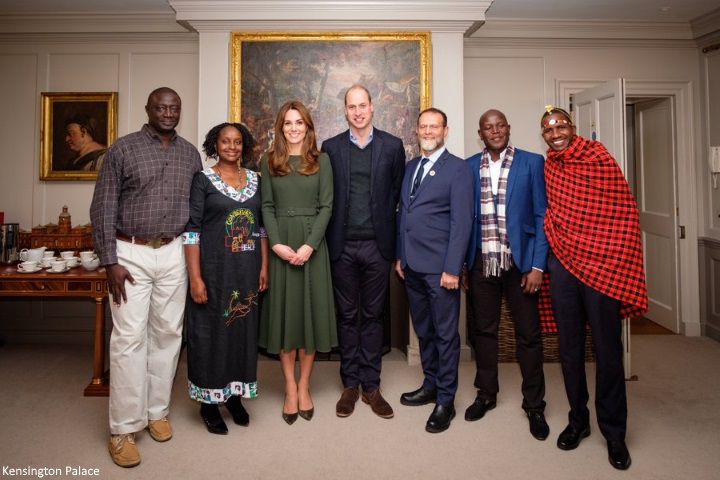 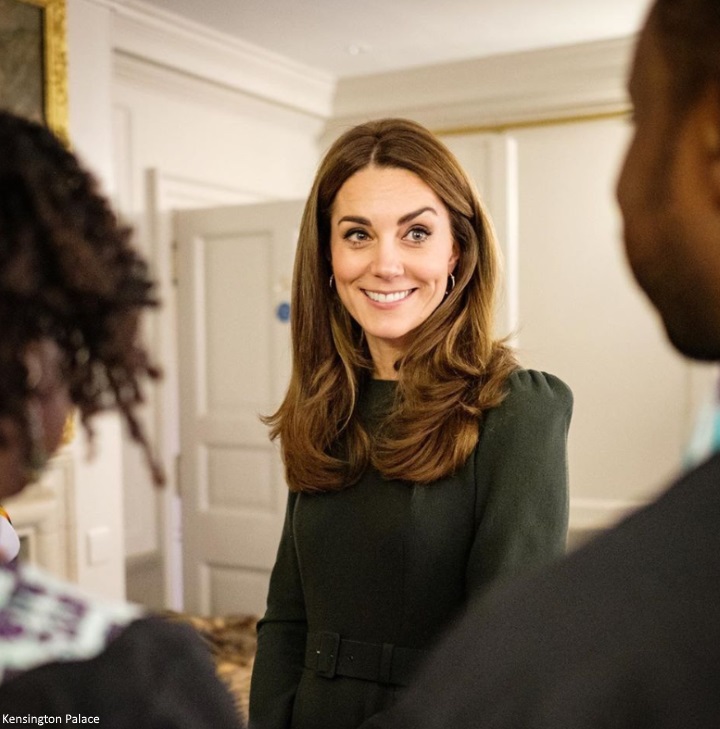 Prince William became patron of conservation charity Tusk Trust in December 2005 and has been supporting their work through a series of public engagements and behind the scenes work since. Most recently, he visited Tusk projects in Namibia and Tanzania in 2018. Below, the Duke and Duchess meeting guests. 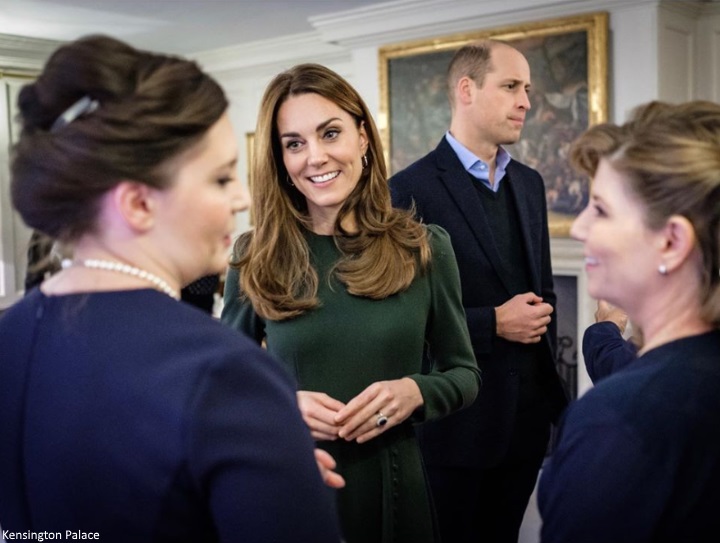 Tonight's awards were held at the Empire Cinema in Leicester Square before a reception at Kate's patronage, the National Portrait Gallery.

The Tusk Conservation Awards aim to highlight the outstanding achievements of individuals working within the field of conservation. From practical field work to successful environmental education, these awards recognise the achievements of individuals who are ensuring the future of Africa and bringing the challenges faced by the continent to a global audience. Kensington Palace said: "For almost 30 years, Tusk has pioneered successful conservation action in Africa by protecting wildlife, empowering communities and advancing the frontline in the fight against the illegal wildlife trade." 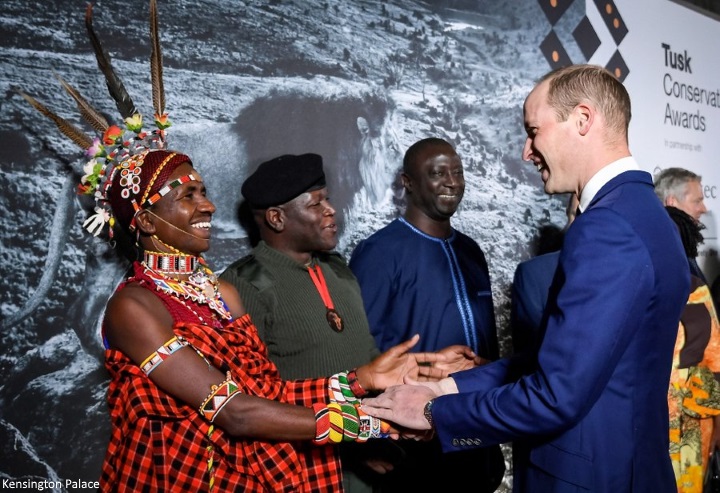 William presented three awards including the award for 'Conservation in Africa' to turtle biologist Tomas Diagne who has devoted most of his life to eliminating threats to turtles and tortoises across West Africa. 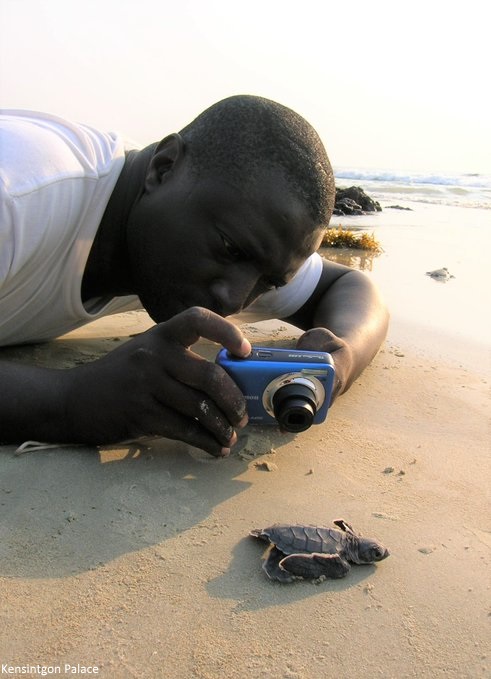 During a speech, William said "Earlier today, Catherine and I spent some time with the nominees and finalists. Their bravery, single-minded determination, and commitment to African conservation is deeply deeply humbling." 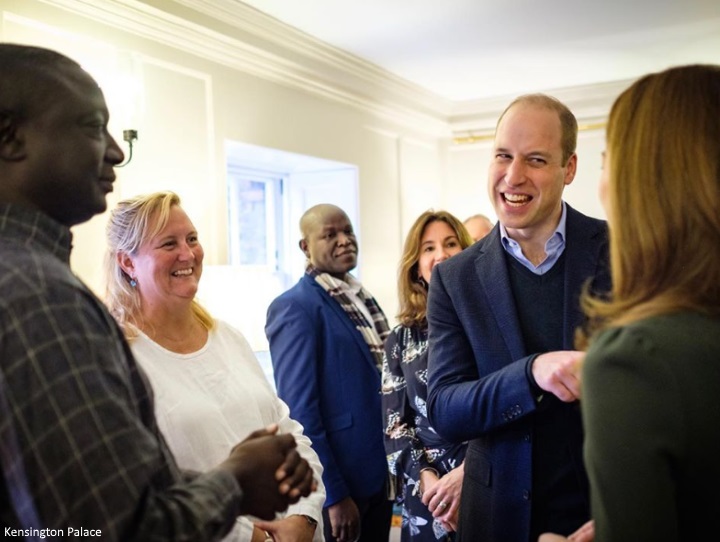 He continued "My generation and those following are acutely aware that we cannot simply carry on as we are. We have to move faster and more effectively to find ways to balance our demands on this planet with the nature we share it with." 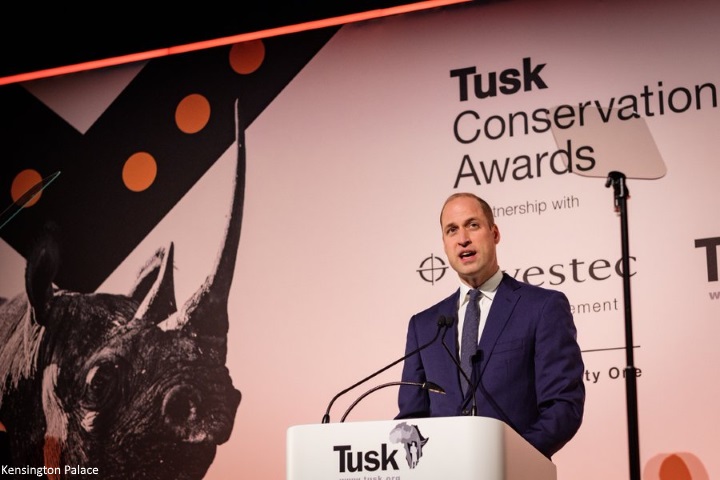 Kate selected her Beulah London Yahvi midi dress earlier today. The £550 piece was described as "This tailored crepe below-the-knee dress has a slim fitting sleeve adorned with covered buttons, with a fluted frill cuff detail. Fitted at the waist with a full midi length skirt, this dark green dress has covered button detailing to the side with a split opening that falls just above the knee." Kate debuted it in January for a Family Action engagement. 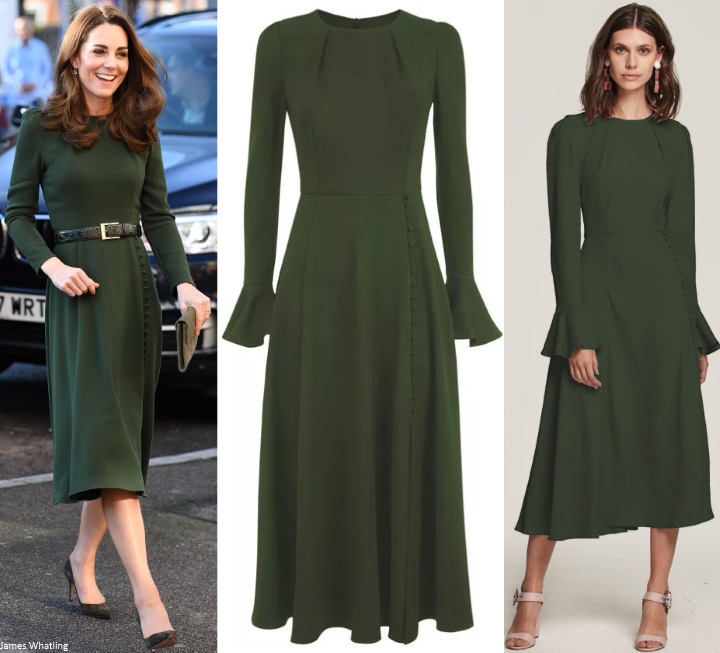 It looks like Kate teamed the dress with her olive green Gianvito Rossi 85 pumps. 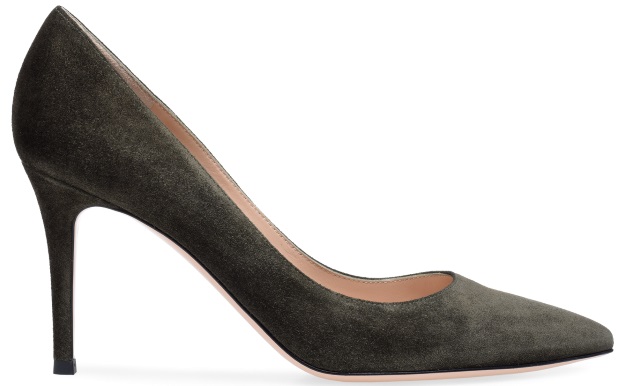 Additionally, the Court Circular recorded three private engagements yesterday, including an early years Royal Foundation meeting, a reception with representatives from the nursing profession and the Nursing Now campaign of which Kate is patron. A couple of guests shared a little more information on social media including news guests enjoyed drinks, canapes and Christmas activities before William and Kate arrived. 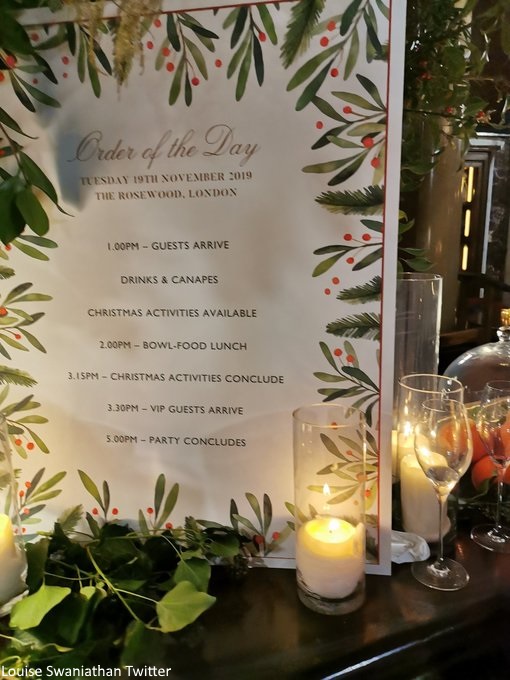 It was held at the Rosewood Hotel in London. 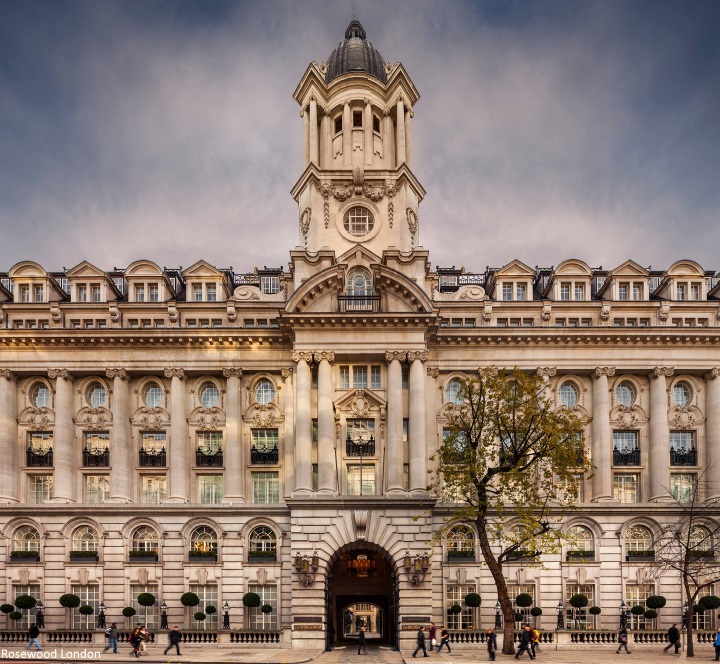 The Duke and Duchess also met with the King and Queen of Bhutan. Readers will recall William and Kate were warmly hosted by King Jigme Khesar Namgyel Wangchuck and Queen Jetsun Pema during their official visit to Bhutan in 2016. 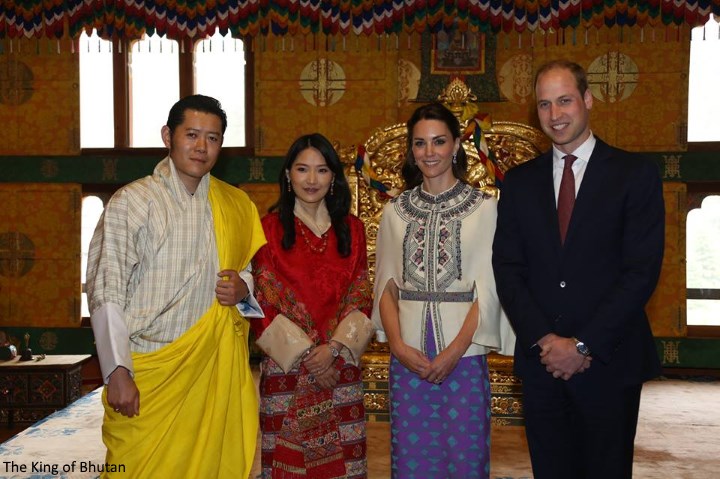 As we're catching up on news generally, fans of the Queen of Baking Mary Berry will be pleased to know Kate is said to be teaming up with her for a Christmas special. The Mirror revealed the Duchess is expecting to join Berry and a selection of VIPs to create a festive feast for charity workers on duty over Christmas. Kate has met Mary on a number of occasions over the years, most recently at RHS Wisley. HRH once revealed she is "a big fan of her cookbooks and cakes". We should hear more on this in the coming weeks. 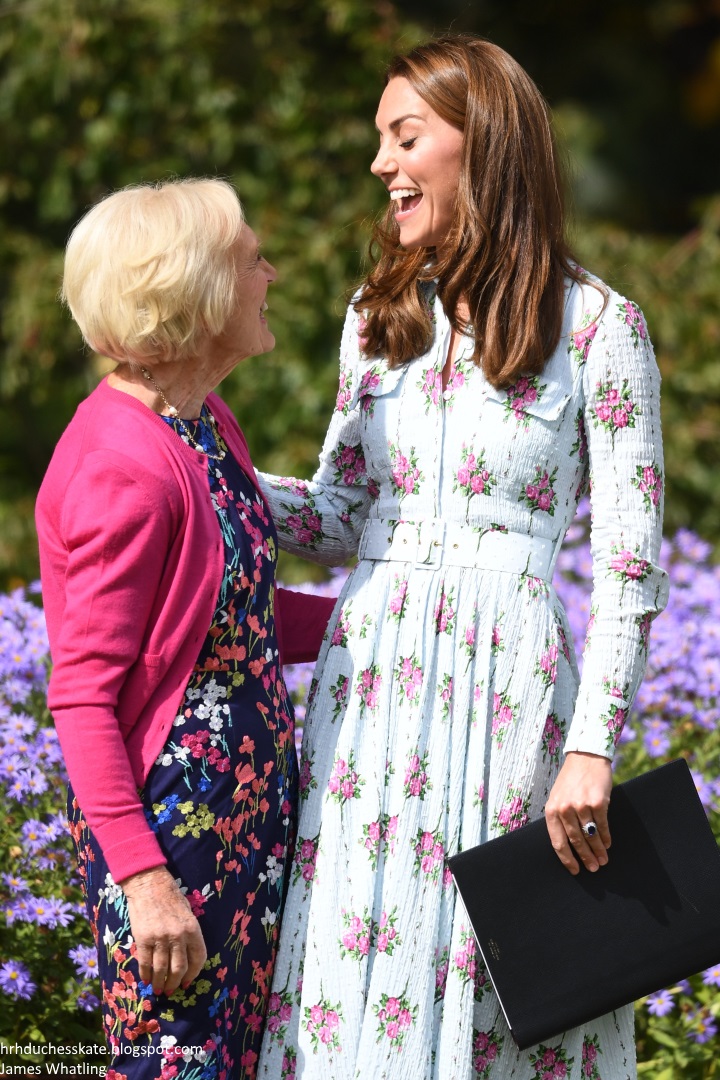 Rebecca English reports Kate's private secretary Catherine Quinn will be moving on from her role after Christmas.

'Royal right-hand woman Catherine Quinn has worked as Kate’s private secretary since October 2017, a role that is similar to a chief of staff. She is responsible for everything from organising Kate’s diary and meetings to accompanying her on engagements.

But she has also been instrumental in helping the future queen develop her ‘early years’ project, working with organisations to better support children in order to avoid issues such as addiction, social exclusion and crime in later life.

The high-flying Oxford-educated mother-of-one’s appointment was seen as sign of the duchess’s determination to ‘beef up’ her office and public profile as a working royal and future Princess of Wales.

Miss Quinn had been working a chief operating officer at the University of Oxford's Saïd Business School, and previously worked as head of grant-giving at global charitable healthcare foundation the Wellcome Trust.'


It will be interesting to see who is chosen to succeed Ms Quinn, who brought a wealth of experience to the table. Kate's assistant private secretary Natalie Barrows, who is very visible by Kate's side at quite a lot of events, could take the role. We could also see someone entirely new in the coming months. 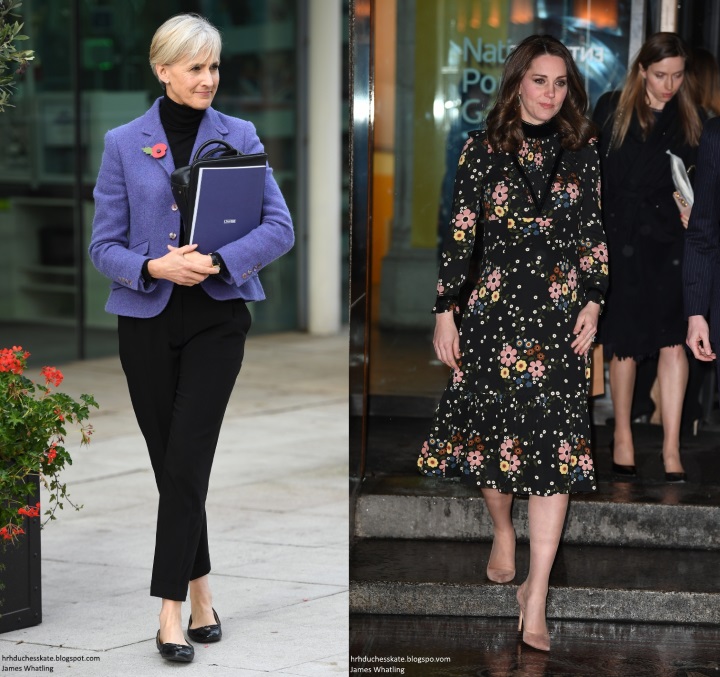 Hope you all have a great weekend! I expect we'll hear further engagement announcements any day now.
Posted by Admin at 22:29:00