The Duchess in Black Lace McQueen For Royal Variety Performance

It was an evening of entertainment and glamorous guests for the annual Royal Variety Performance at London's Palladium Theatre. 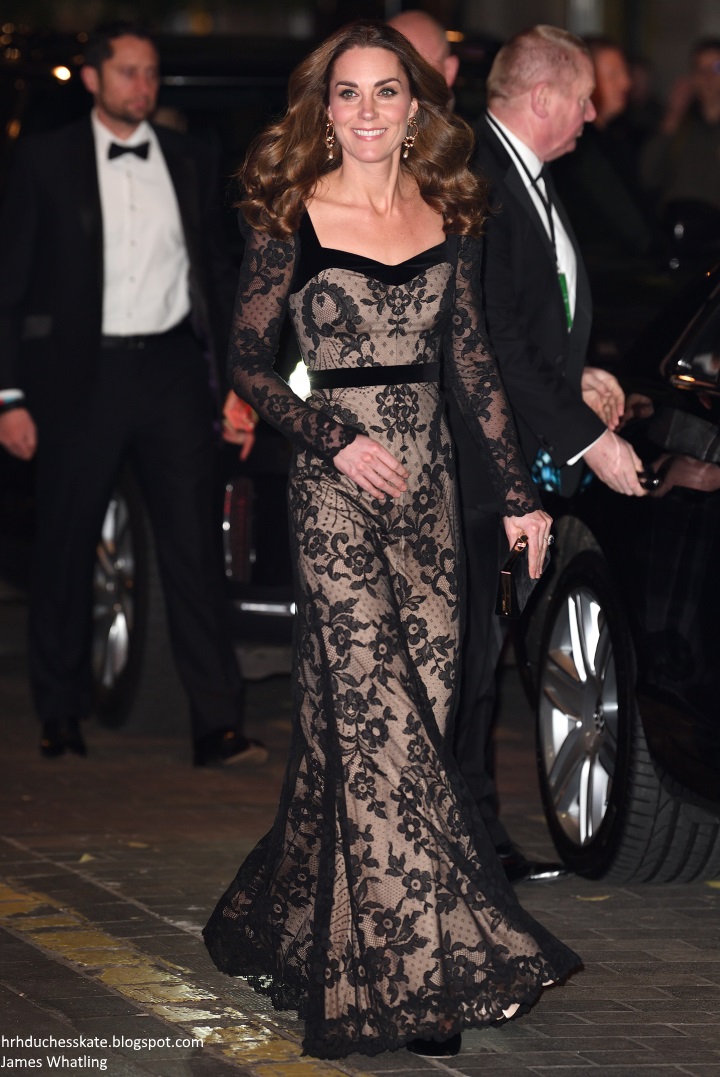 The Duke and Duchess arriving. 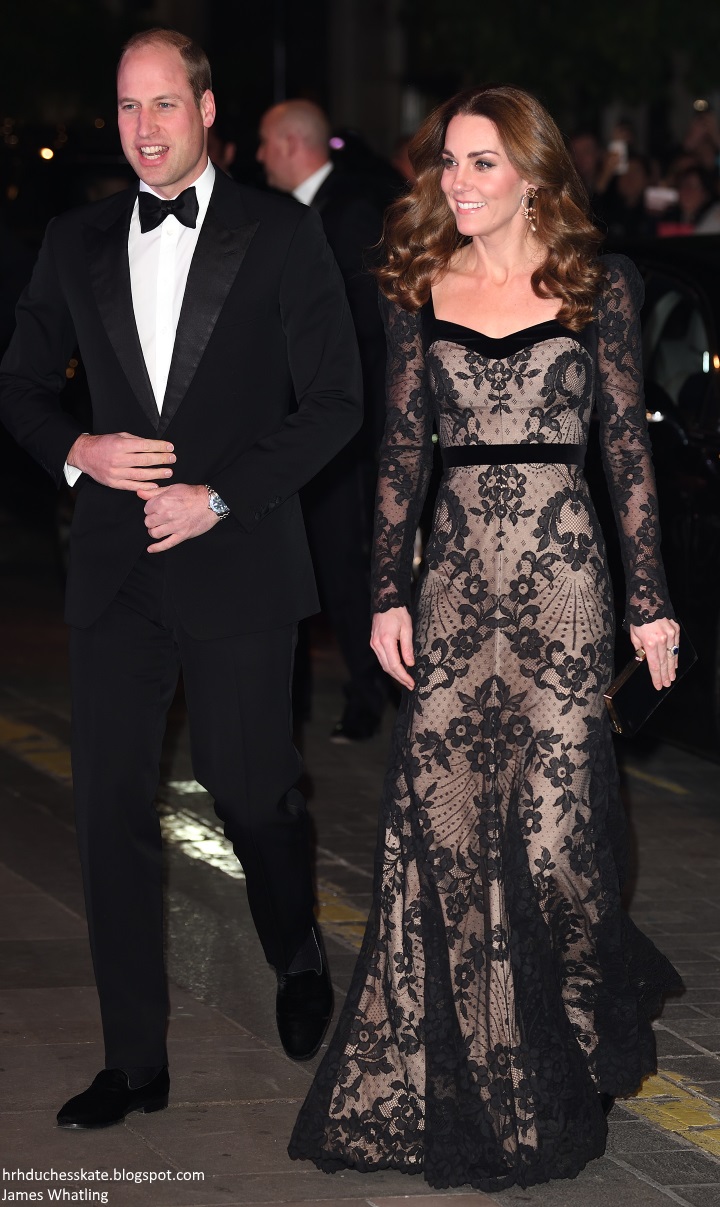 The Royal Variety Performance takes place every year and is held in aid of the Royal Variety Charity. The money raised from the show helps hundreds of entertainers throughout the UK, who are in need of help and assistance as a result of old age, ill-health, or hard times. In particular, the charity assists former members of the entertainment industry living in Brinsworth House, a residential home in Twickenham, which is owned and run by the charity. 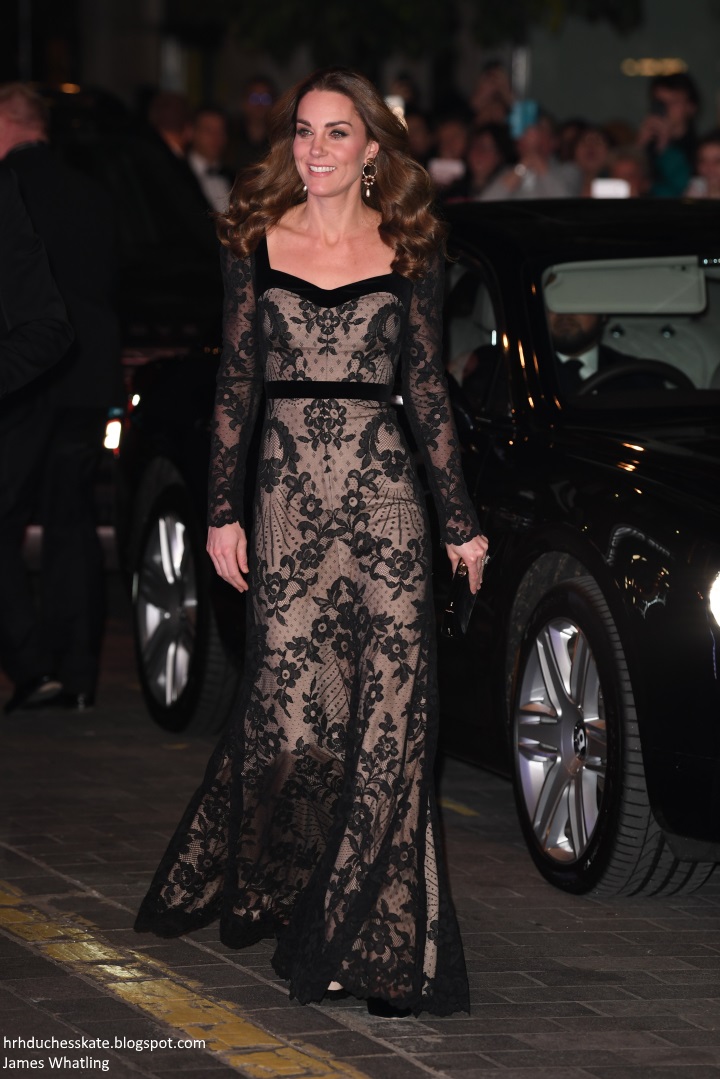 Plans to improve Brinsworth House are currently underway with a fundraising campaign. The Chairman of the Royal Variety Charity, Giles Cooper, recently said that "the need for care is evolving & requirements & standards have rightly improved, so our plan is to upgrade and regenerate Brinsworth House. With your support, we can achieve just that!" In the background, one can see an image of the Queen and Prince Philip attending the performance in 1955. 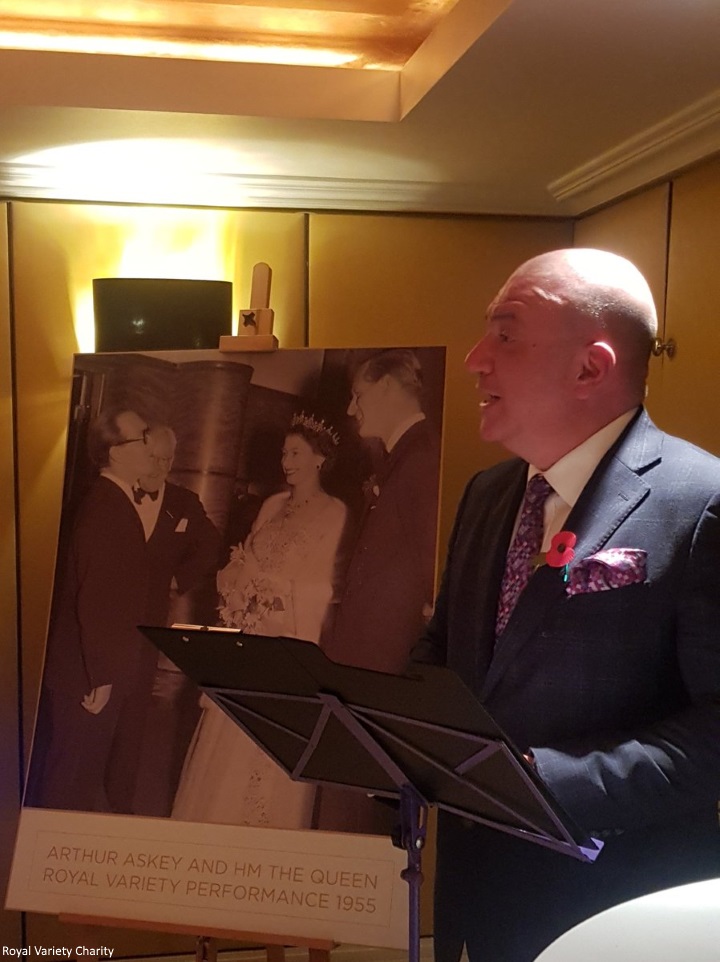 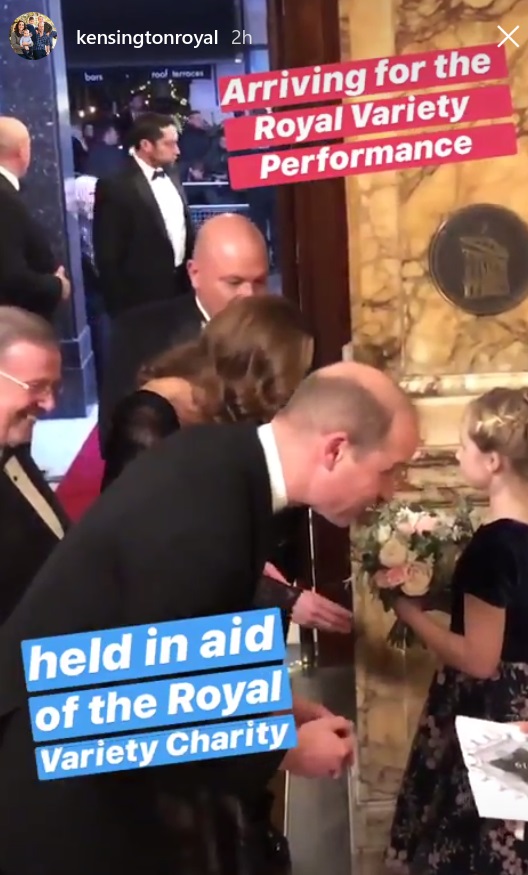 An overview before guests began to arrive. 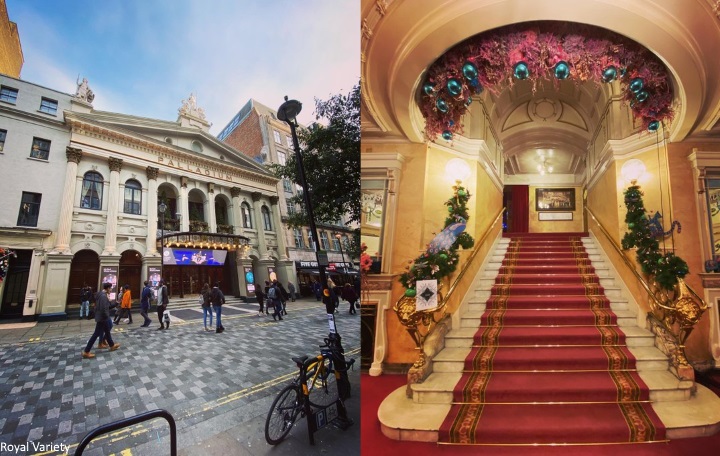 The Duchess told the cast of Mary Poppins, including Petula Clark, Charlie Stemp and Zizi Strallen, that George and Charlotte wanted to go with them to the show, but she told them "not on a school night".


The Duke and Duchess take their seats. 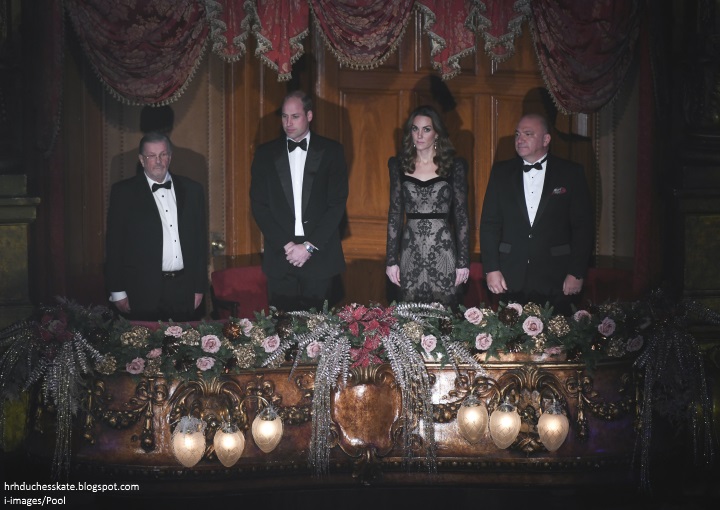 It dates back all the way to 1912 when the inaugural performance was watched by King George V and Queen Mary. In July 1919, a second royal show was performed. Held at London Coliseum, the show was staged as a 'celebration of peace' and, as the official announcement expressed it, "had been commanded by the King to show his appreciation of the generous manner in which artistes of the variety stage had helped the numerous funds connected with the War". 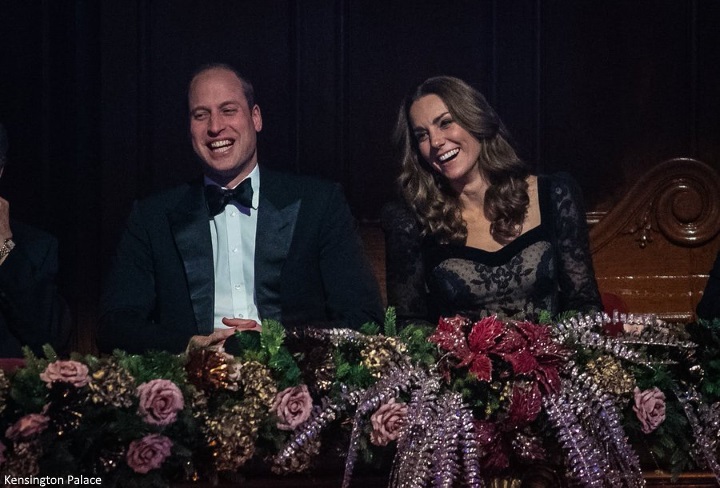 It is believed to be one of the few charities in the UK that has an unbroken line of patronage from the reigning monarch since George V in the early twentieth century. Queen Elizabeth II is the current sole life-patron of the charity. Below, the poster for the 1930 performance. 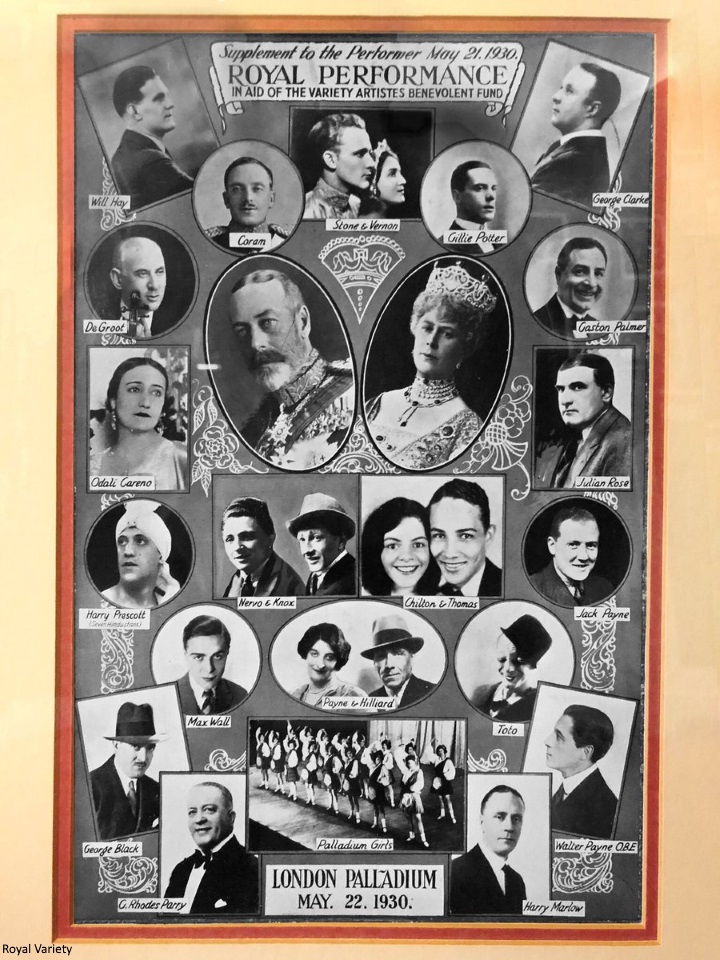 In more recent years, we've seen Prince Charles and the Duchess of Cornwall, the Cambridges and the Sussexes alternate attending the event. It's William and Kate's third time at the Royal Variety. They first attended in 2014, Kate repeated her black lace DVF gown. In 2017, the Duchess debuted a sparkling blue Jenny Packham design. 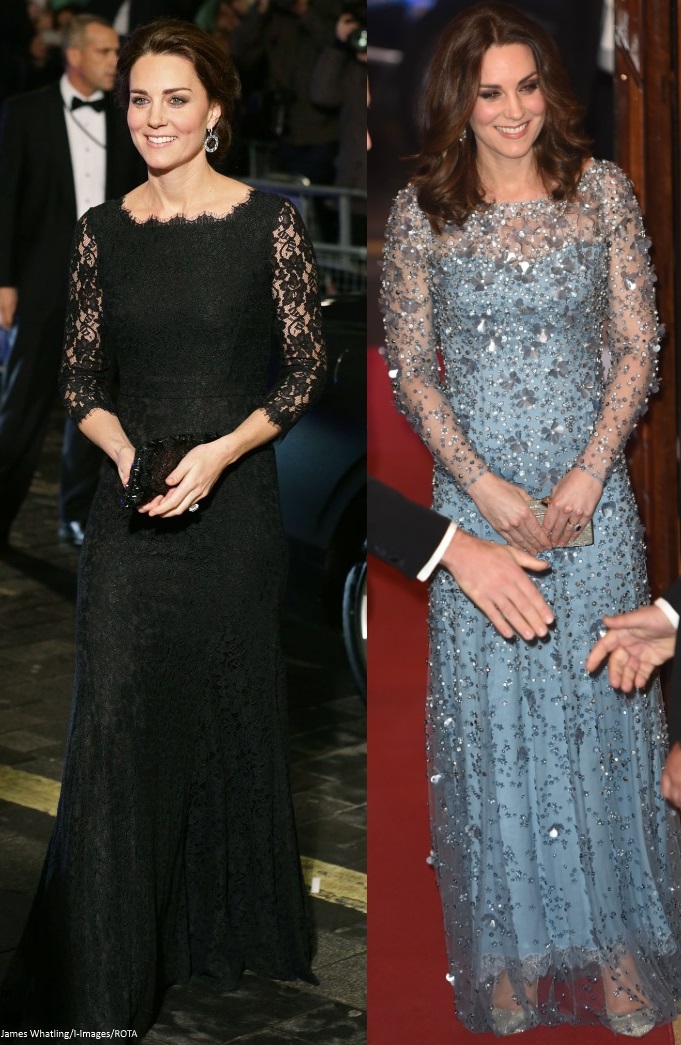 Hosted by Rob Beckett and Romesh Ranganathan, the evening included performances from the cast of Mary Poppins, Lewis Capaldi, Mabel, Robbie Williams, the cast of Come From Away, and a special collaboration by Emeli Sandé and Manchester’s Bee Vocal choir. Below, a great shot shared by Kensington Palace. 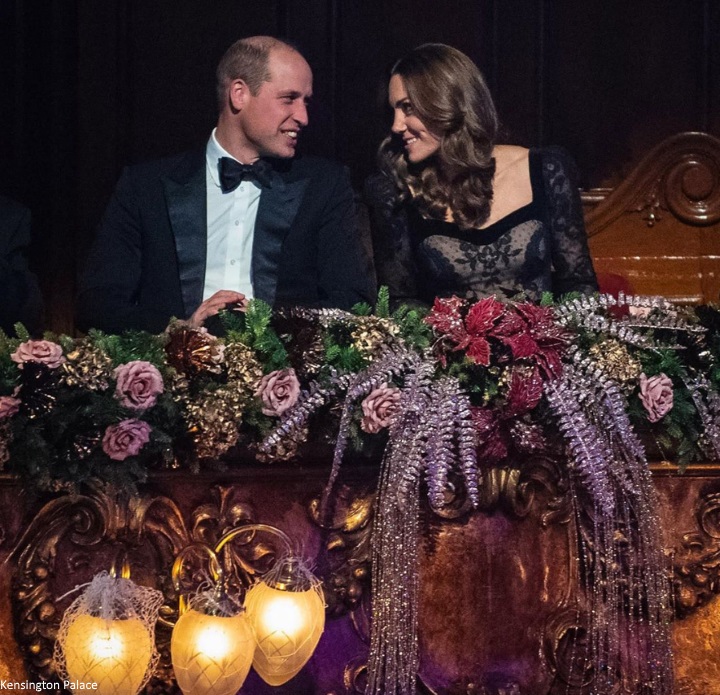 They received a very comedic introduction by the hosts. The Mail reports:

'The comic pair introduced the royal couple and joked that they were on a 'date night' as the camera focused on them laughing and giggling in the Royal Box - William nodding with mock seriousness.

The comedians asked whether they had paid the babysitter to stay 'until 12 or 1' - joking: 'It's always worth £20 for the extra hour.' 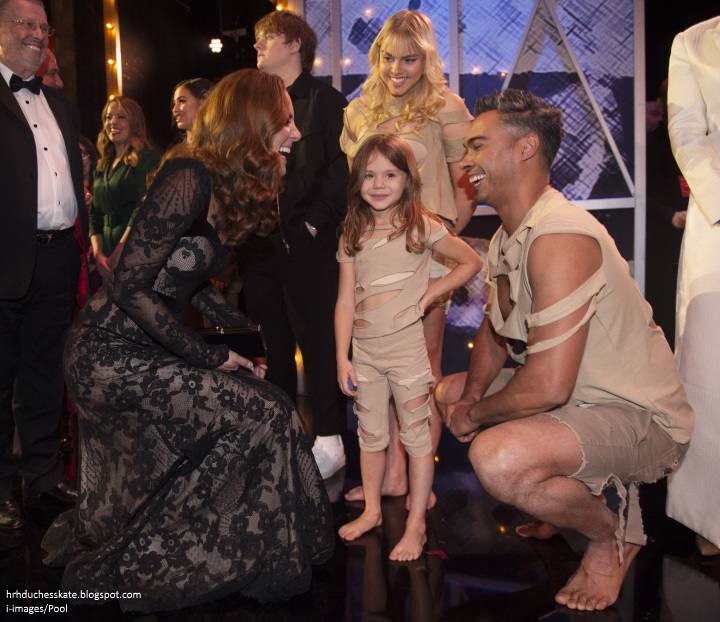 'William was left in stitches was he was jokingly handed a ‘commemorative’ tea towel by the show’s hosts, comedians Rob Beckett and Ramesh Ranganthan, which had their faces on instead of his and Kate’s. The prince roared with laughter and said he would try to find something to do with it.

Beckett said: ‘Maybe you know someone who might want it. ‘ ‘Yeah, the dog will love it,’ joked William, who told the the two men that hopefully they could relax now, When Kate was given a bouquet of flowers by two youngsters who star in the new Mary Poppins musical, Nuala Peberby, 14, and Fred Wilcox, nine, the prince told them: ‘How come I get a dodgy tea towel and she gets some flowers?’

Nuala revealed afterwards that Kate had told her that George and Charlotte - particularly her daughter - love performing and putting on little shows at home. ‘She said that her children love performing at home, particularly Charlotte,’ she said. ‘She told us how lucky we were to be on stage in the West End and asked how we managed to do it with all our school work. I can’t tell you how exciting it was to meet them. ‘

Another posy for the Duchess as she departed. 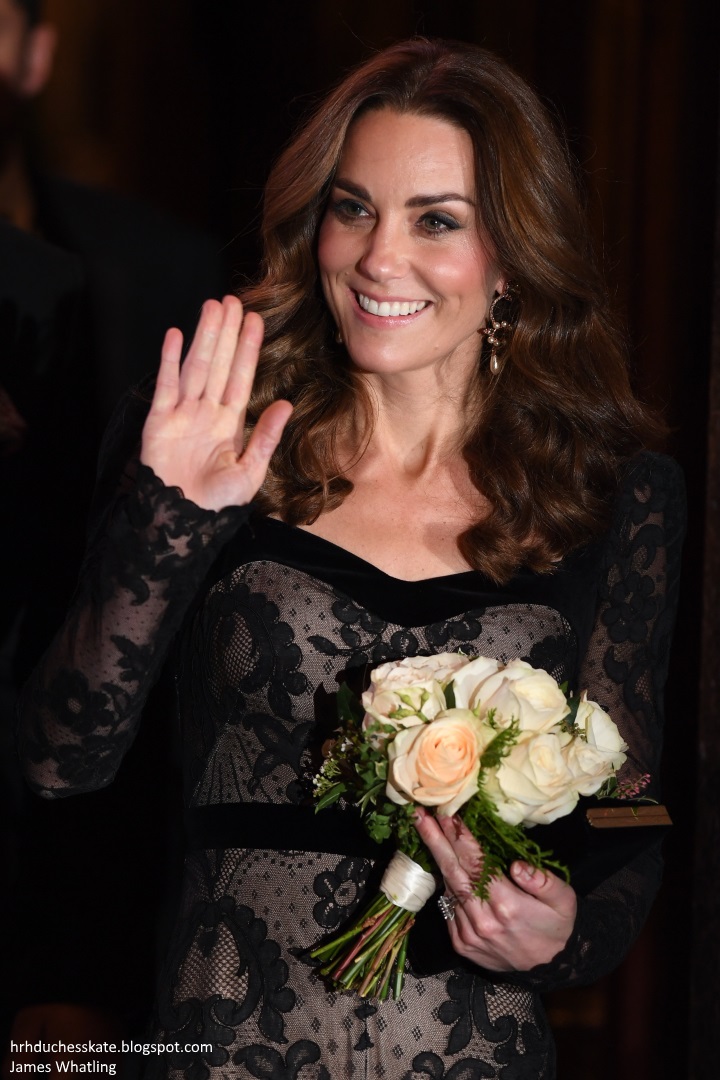 A video from the event with footage of William and Kate meeting performers.

The Duchess chose a stunning black lace Alexander McQueen gown for the night. The bespoke piece features puffed sleeves, lace overlay, a fitted silhouette, velvet detail on the neckline and waist. and an intricate floral pattern. Kate has a penchant for this style of gown, I expect we'll see it again on at least a couple of occasions. The tailoring is beautifully done as always by McQueen and the touch of velvet against the lace has a very luxurious, seasonal feel to it. 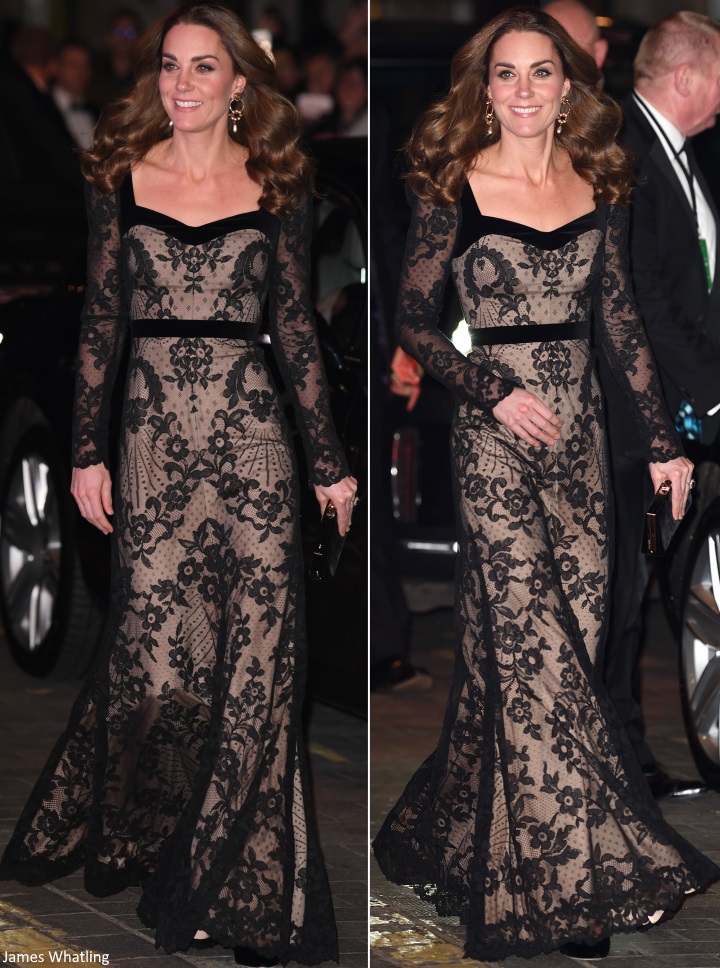 A look at the back of the dress.

Kate teamed it with her Jimmy Choo Romy 100 pumps. 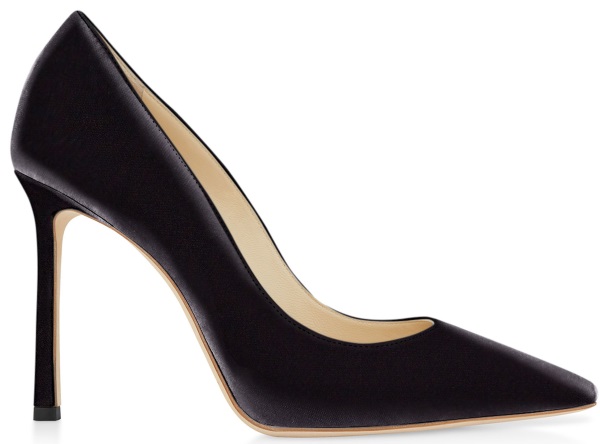 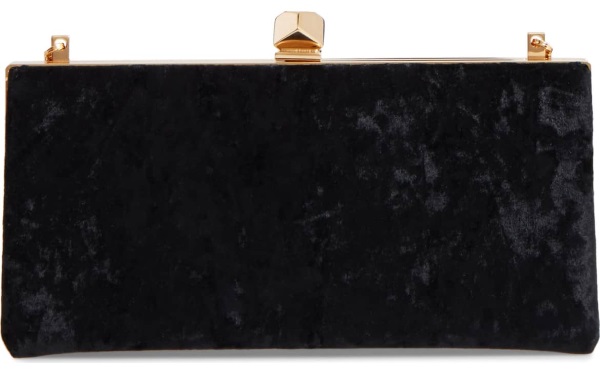 Kate accessorised with her statement Erdem Floral earrings. They are described: "Elegant, refined, and feminine, these Floral earrings by Erdem illustrate the designer’s attraction to romanticism. This accessory is defined by the layering of numerous mother-of-pearl beads with orange, black, and gray crystals." Below the earrings with a different centre stone to Kate's. 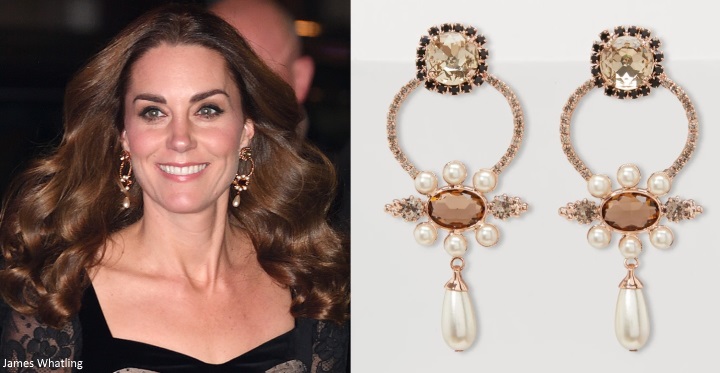 It's another evening event for William and Kate on Thursday for the Tusk awards.
Posted by Admin at 19:14:00