The Royal Family Gathers for Festival Of Remembrance

The Royal family gathered at the Royal Albert Hall tonight for the annual Festival of Remembrance.

During Remembrance Week, Her Majesty and members of the Royal family, lead the nation in commemorating and honouring the men and women who have sacrificed themselves in service to our country. The period in November marks one of the rare occasions when see the family together in large numbers. 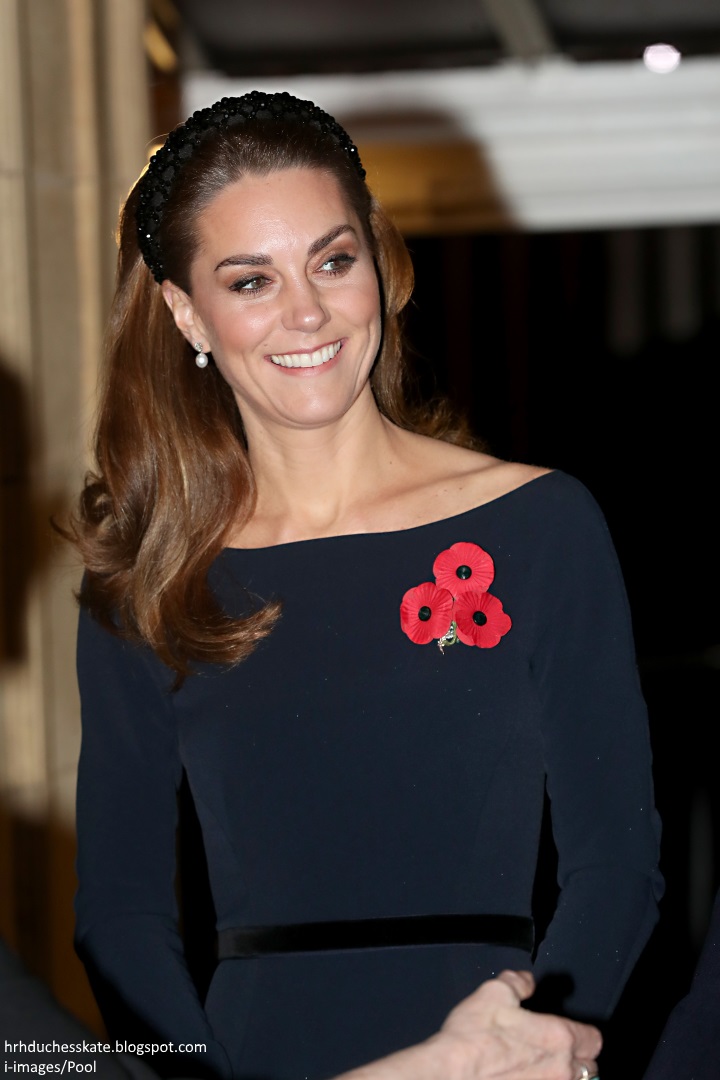 I often hear readers from outside the UK comment on how the UK pays tribute to our fallen heroes. I believe it is not only an honour to do so, but vital for future generations to remember those who gave their today for our tomorrow. 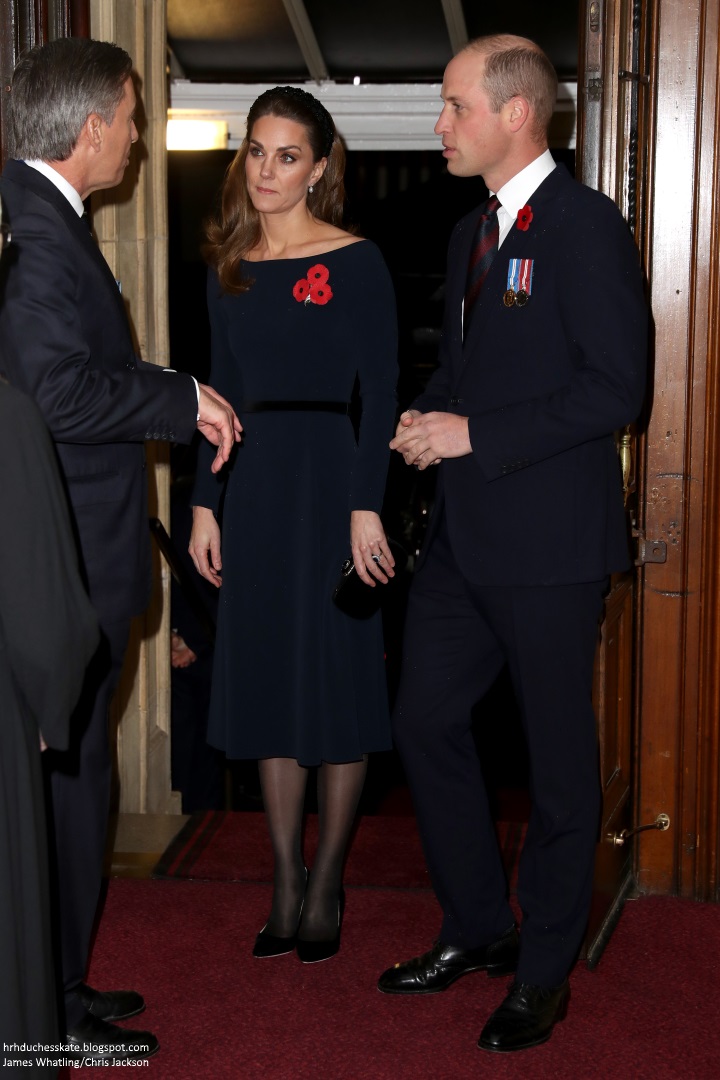 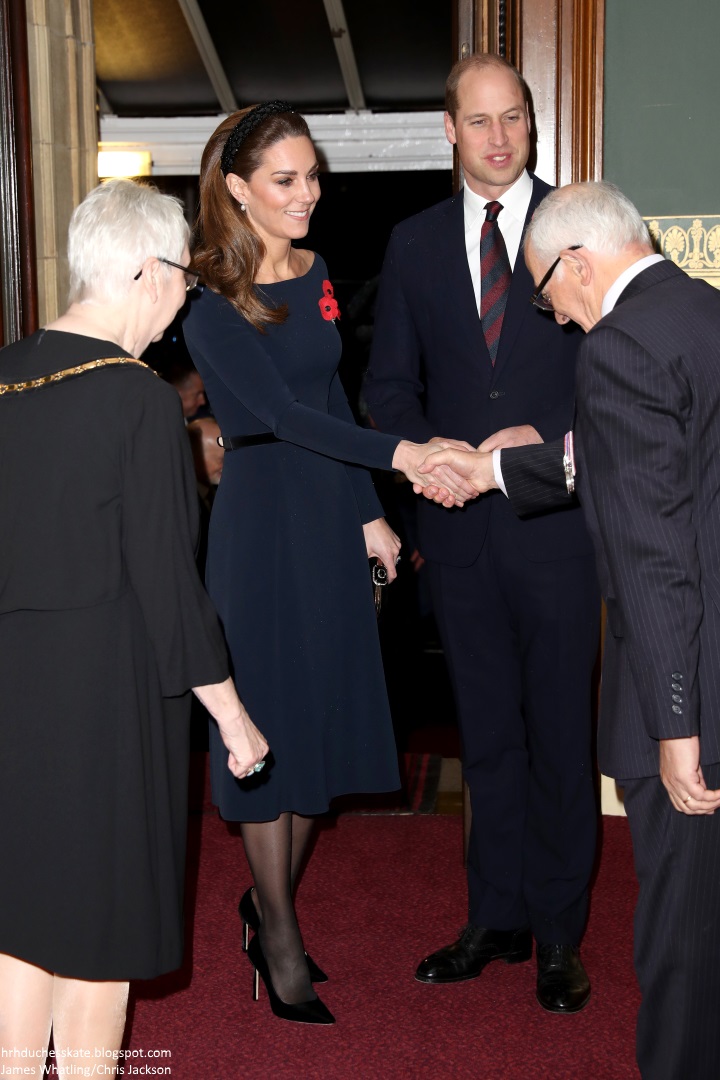 The Duke and Duchess of Sussex arriving. 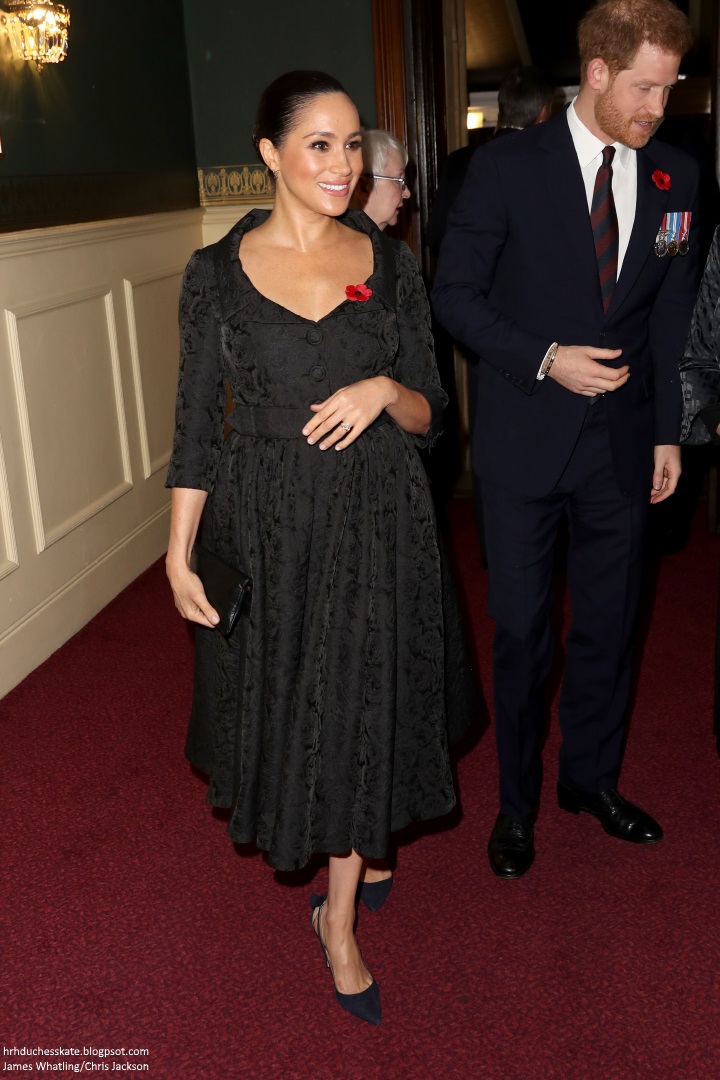 Each year the Festival of Remembrance focuses on specific themes. This year, it marks the 75th anniversaries of the great battles of 1944 - Monte Cassino, Kohima and Imphal, D-Day -  and the collaboration and friendship of the British, Commonwealth and Allied armies who fought them. It also celebrates the role of GCHQ (Government Communications Headquarters responsible for signals intelligence) and the role of those in the secret service whose efforts are not publicly known. 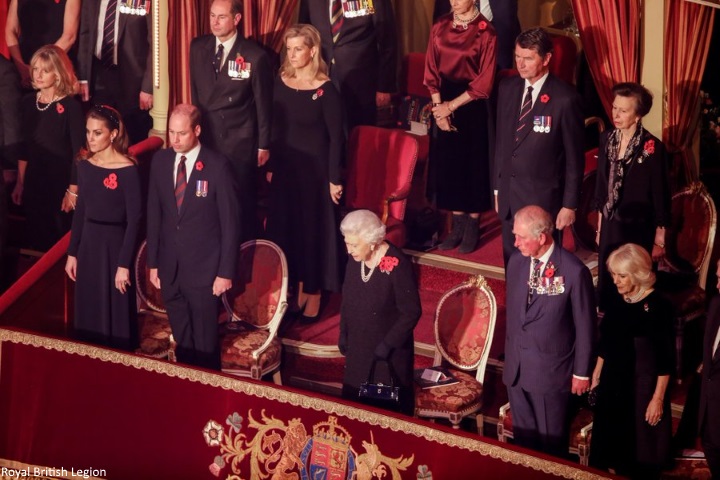 The event has been held at the Royal Albert Hall every year since 1927. Her Majesty has been patron of the Royal British Legion since 1952, only missing two festivals in the many years since. 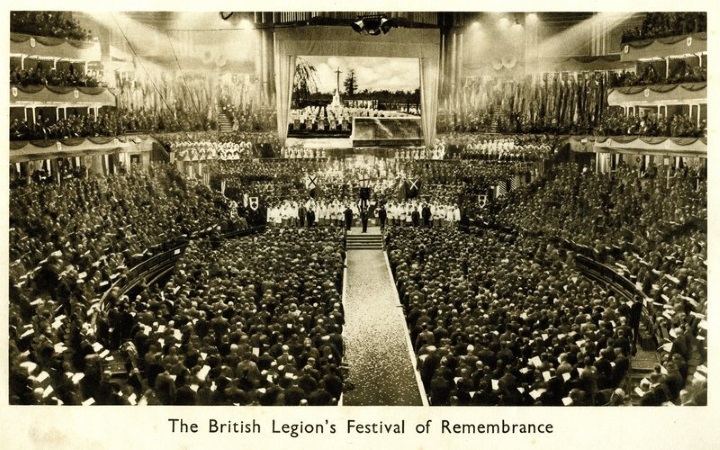 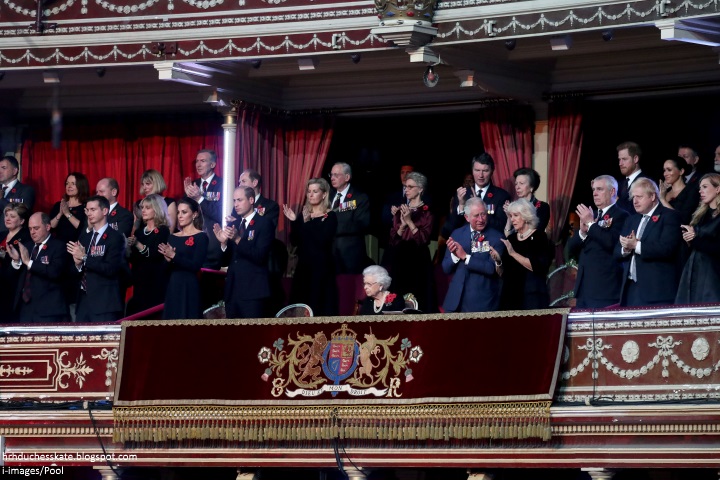 Ahead of the arrival of the royals, the hanging of the hammercloth takes place. Archivist Suzanne Keyte said: "There are many things that an archivist expects to find as part of their job, but one of the most unusual and rather lovely jobs at the Royal Albert Hall is caring for the hammercloth and ensuring that it is hung from the balcony in the Royal Box whenever the reigning monarch visits the Hall. The hammercloth is a beautiful and very heavy velvet curtain bearing the Royal Coat of Arms and the initials of the reigning monarch of Great Britain and the Commonwealth. The origin of the word ‘hammercloth’ is rather vague but was usually meant to mean the heavily embroidered cloth that hung over a coachman’s seat on horse drawn coaches, often embroidered with a coat of arms." 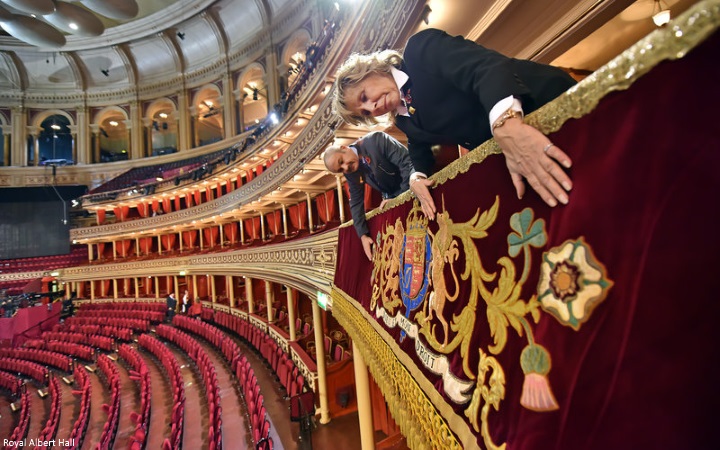 The Royal British Legion's annual festival commemorates those who have lost their lives in service of their country. 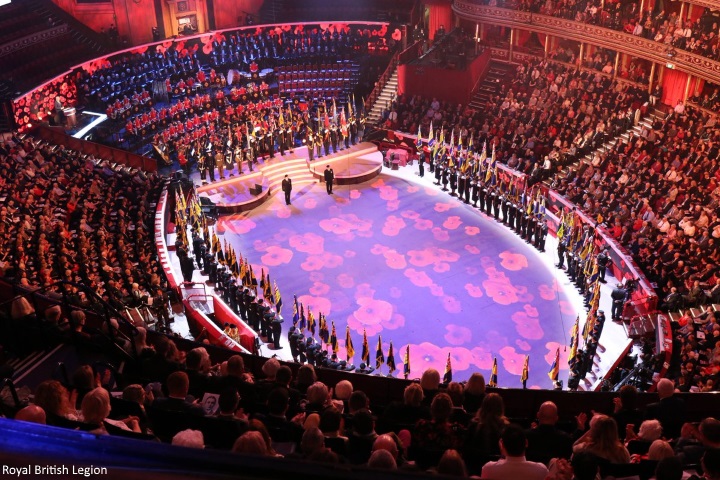 It takes place on the eve of Remembrance Sunday, with two performances on the day - a matinée open to members of the public and an evening event for members of the Legion, their families, officials and royals. 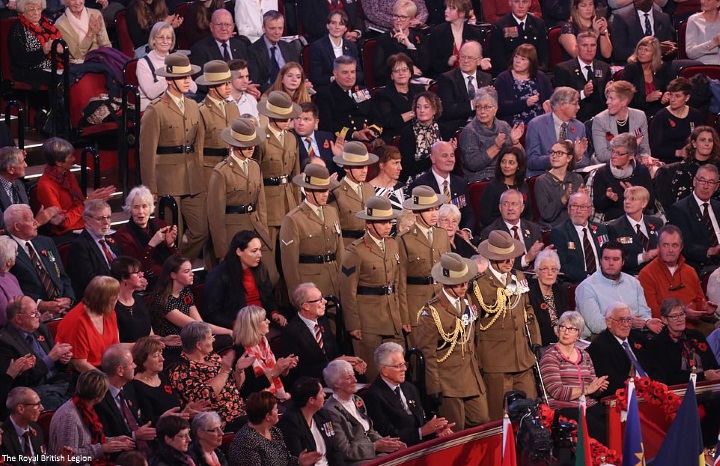 Presented by Huw Edwards, performers included James Blunt and Leona Lewis singing alongside the Central Band of the Royal Air Force and the Band of HM Royal Marines. 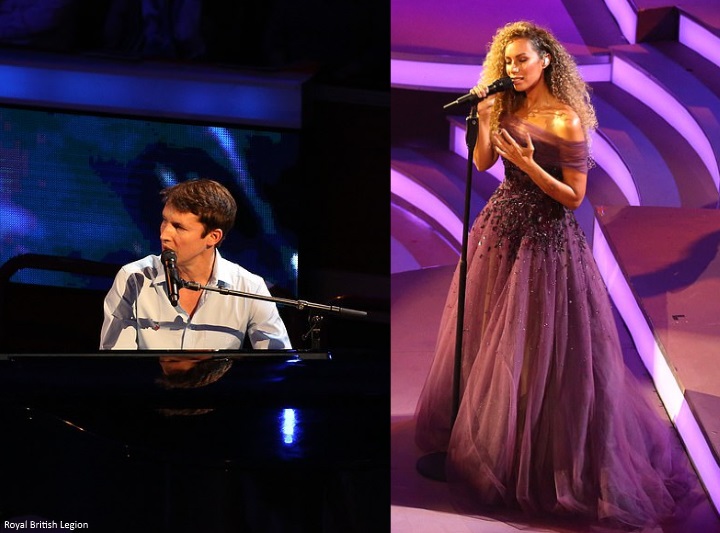 Actor and pianist Jeff Goldblum takes to the stage with ballroom dancers. 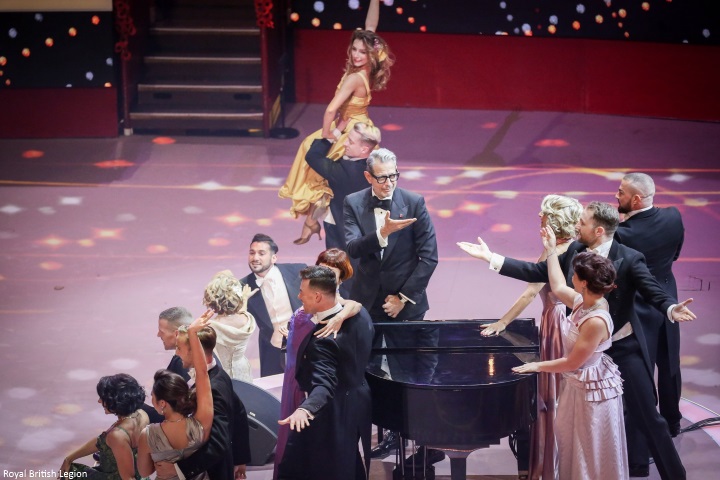 Tonight's event also paid tribute to the company of RFA Mounts Bay who were instrumental in delivering supplies and aid to the Bahamas in the wake of Hurricane Dorian this year. 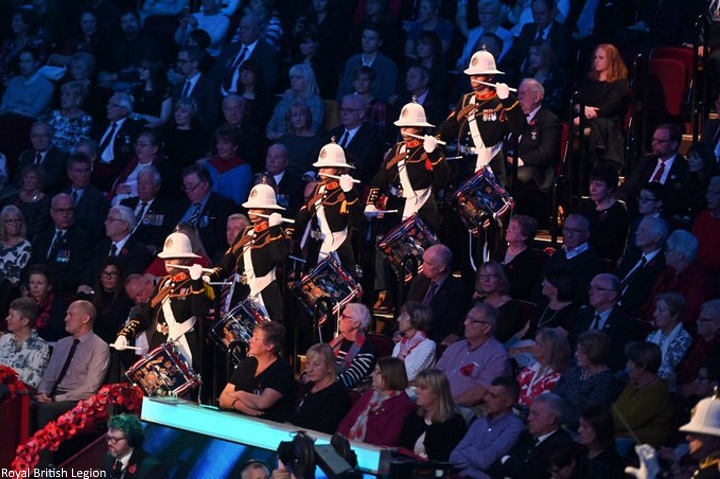 The Torch of Remembrance was carried by 3rd Officer Sarah Stevens. 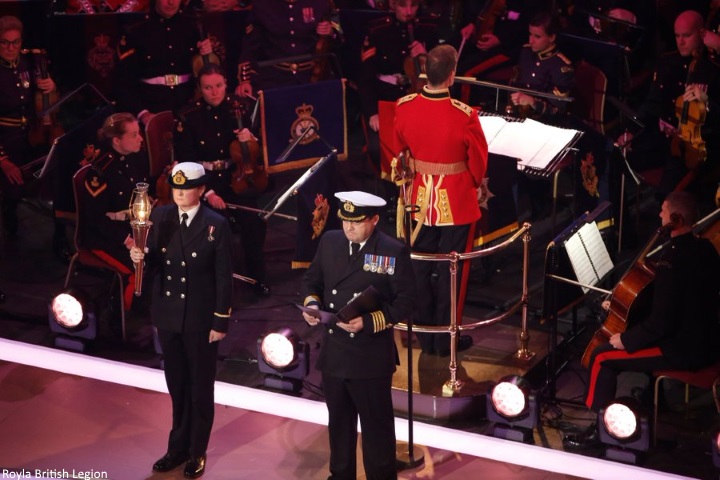 The citation was read by Captain Rob Anders: "We honour the Commonwealth nations and our allies who joined Britain in defending its freedoms, values and way of life." 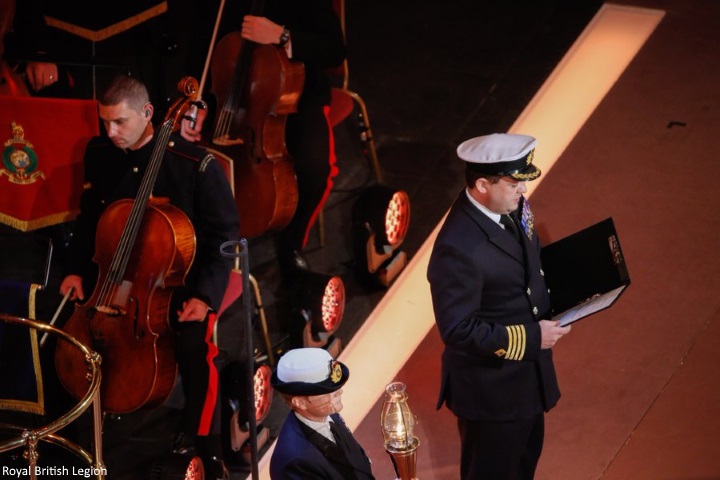 The Duke and Duchess watching the performance. 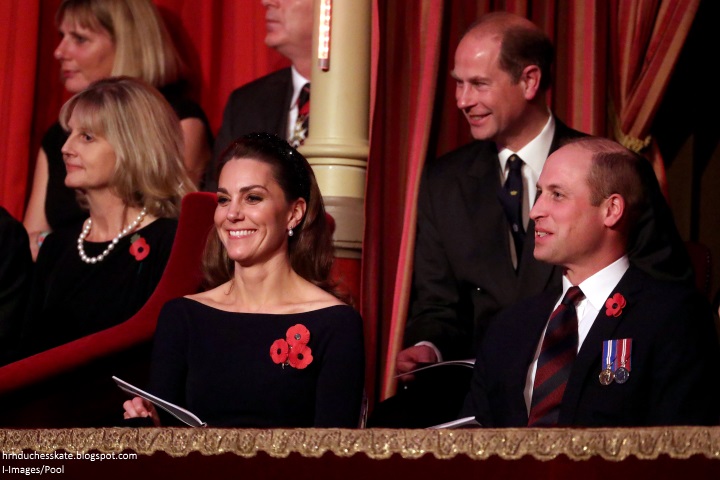 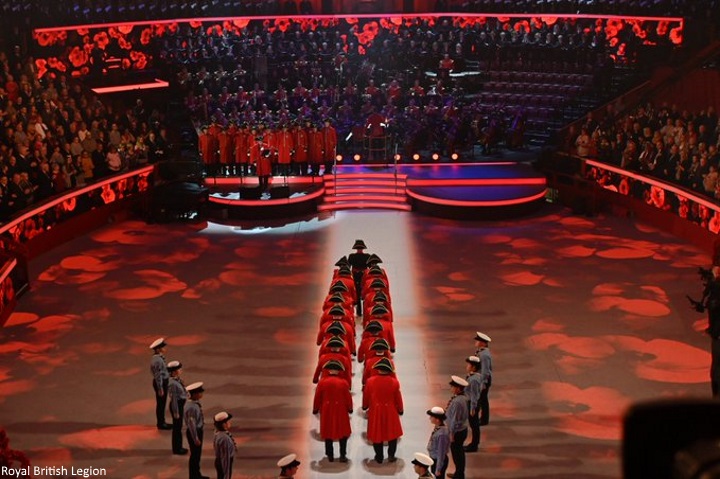 Actor Daniel Mays read the poem 'The Red Poppies on Monte Cassino" as newsreel of the battle played. It is one of the best known Polish military songs of WWII. 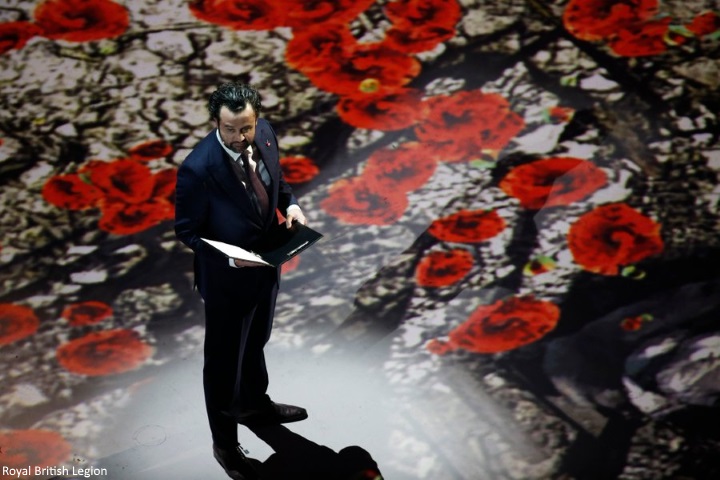 D-Day veteran Eddie Gains talked about landing in Normandy: "When you think about all the lives lost, it's very important to remember, I'm lucky to have survived." 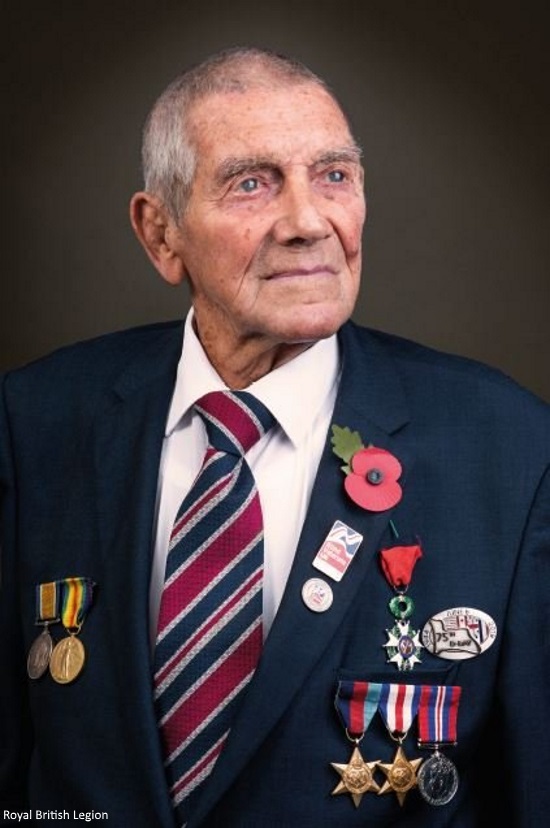 The Duchess was elegant in a navy dress which falls below the knee with a fitted velvet black belt. As it's a Remembrance event, the designer of the garment is not known. It's likely a bespoke piece, possibly by one of Kate's most trusted brands such as Alexander McQueen or Jenny Packham. Kate debuted a new sparkly headband by ZARA (with thanks to Shorty KC). The £22 padded headband features tonal appliqué. 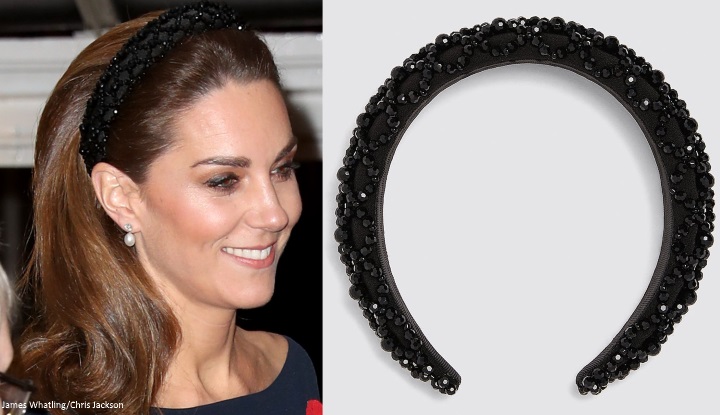 The Duchess accessorised with the Queen's pearl on diamond earrings. She's worn them on multiple occasions. 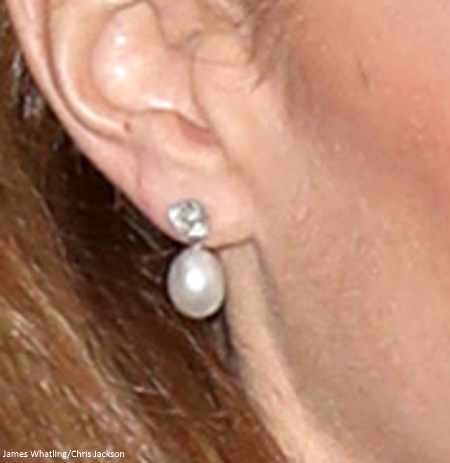 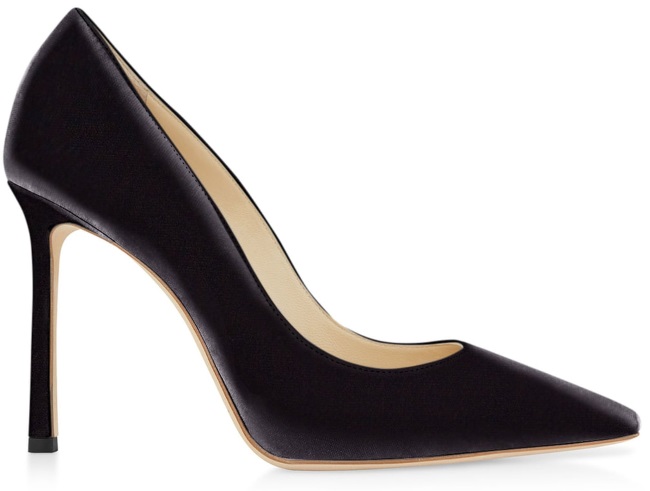 It appears Kate's clutch is a McQueen piece. 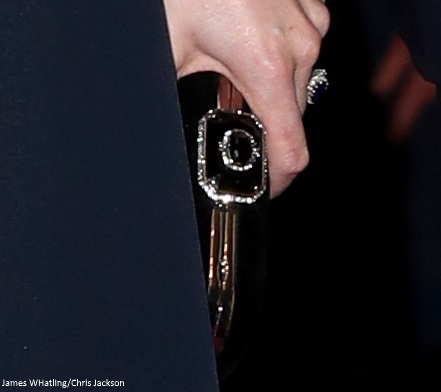 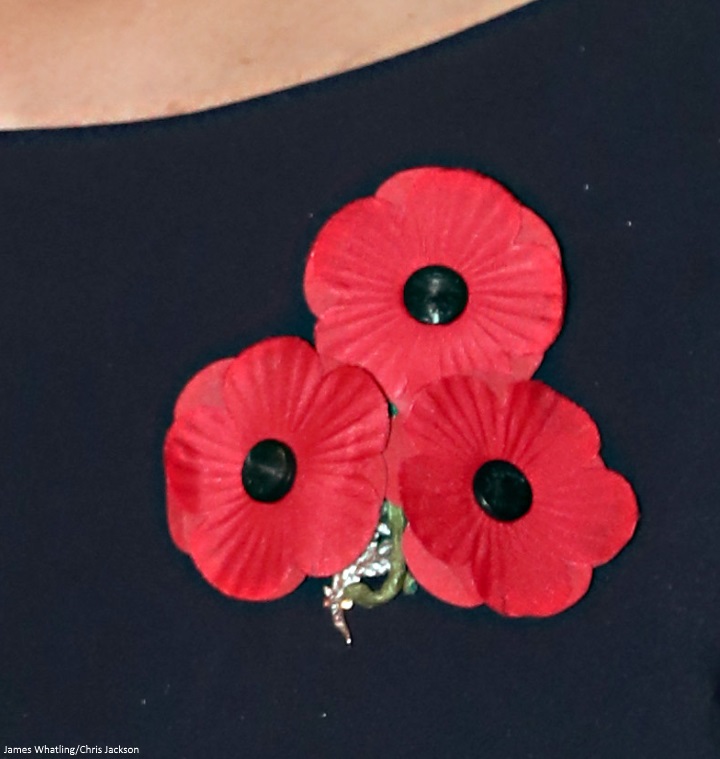 Last year, Kate visited the Imperial War Museum to learn more about the three brothers of her great-grandmother, all of whom fought and died in the First World War. It's likely the three poppies are in memory of Francis, Maurice and Lionel Lupton who made the ultimate sacrifice for their country.

The Festival of Remembrance will be televised on BBC One at 9 pm. We'll see William and Kate and many others royals for Remembrance Sunday tomorrow morning.
Posted by Admin at 19:23:00