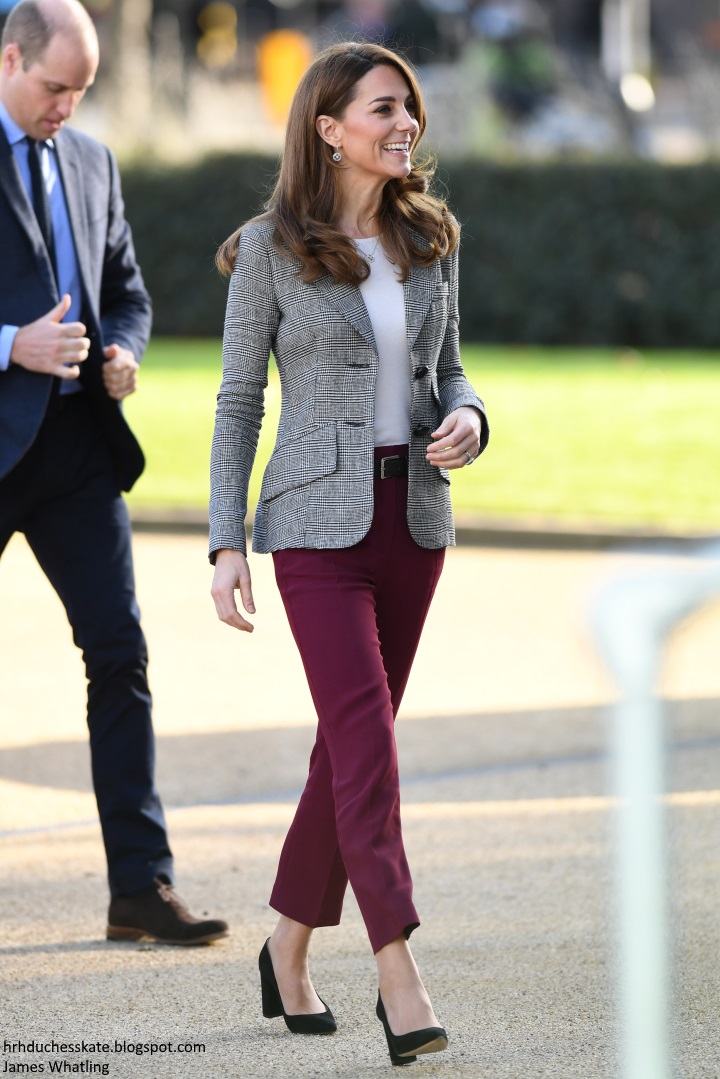 William and Kate were welcomed upon arrival. 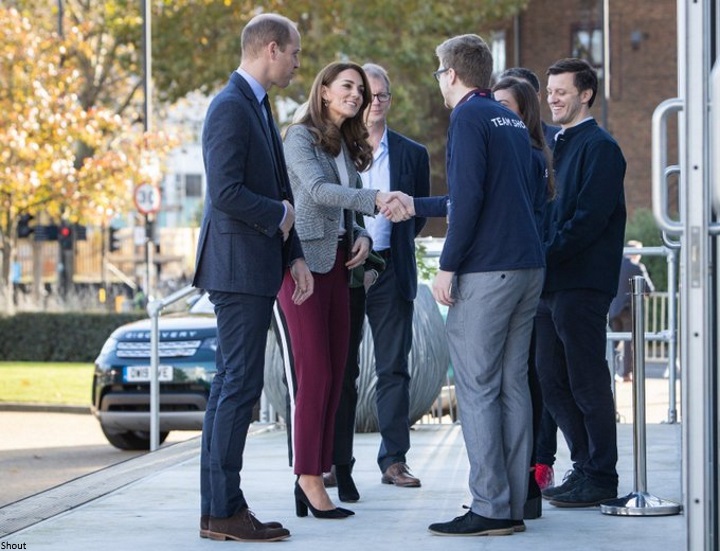 Kensington Palace notes: "Shout operates 24/7 and connects people in need to trained volunteers who provide help at a time when it is most needed; enabling them to move from a moment of crisis to a calm state and form a plan for next steps to find longer-term support. As texting is private and silent, it opens up a whole new way to find help.  It provides instant support - you can have a conversation at any time – at school, at home, on the bus, anywhere. This service is for everyone, but for younger people especially, texting is a trusted and familiar form of communication, and using text rather than apps makes it simple and accessible for everyone with a phone." 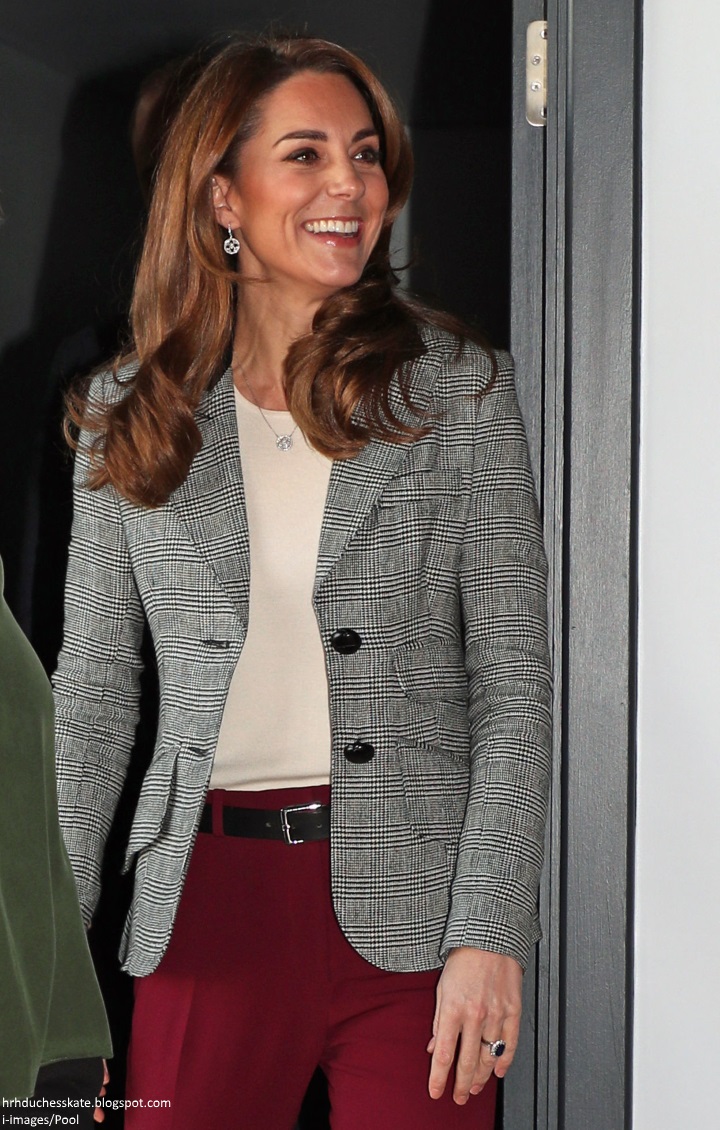 The new text messaging line was launched in May as a lasting legacy to the Heads Together campaign. It is a joint collaboration between William, Kate, Harry and Meghan. The team at the Royal Foundation contacted Crisis Text Line in the US to begin the process of bringing their successful model to the UK. It is the Foundation's largest initiative to date with £3 million invested. 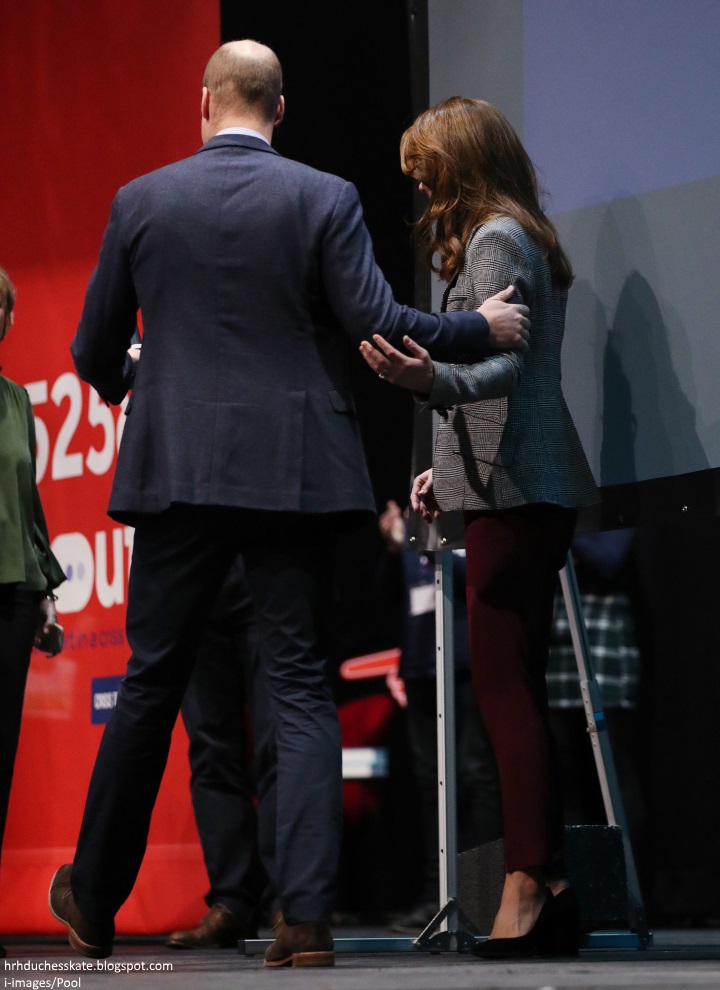 Following the release, Prince William said: "At the heart of this service will be an incredible national volunteer community, one which needs to grow to allow us to support more people in crisis. We hope that many more of you will join us and be part of something very special." 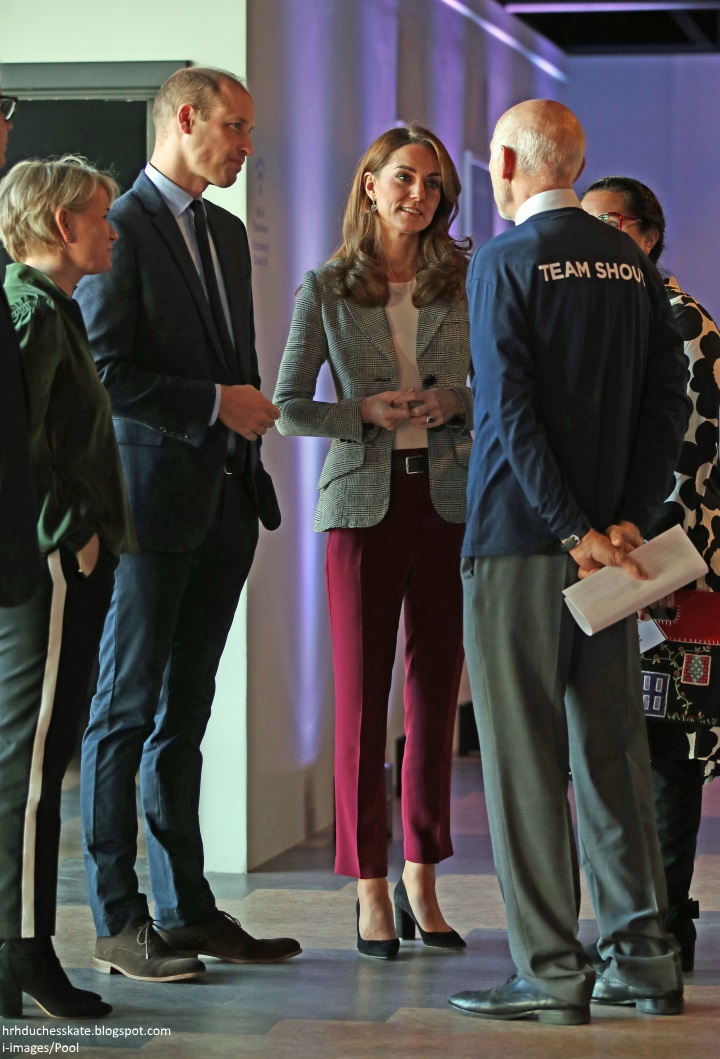 The celebration of volunteers appears to be an annual November event. Last year, the Duke and Duchess of Sussex joined a group to hear firsthand about their motivation for joining the fledgling service. I expect we'll see William and Kate and Harry and Meghan alternate attending - similar to the Royal Variety Performance. 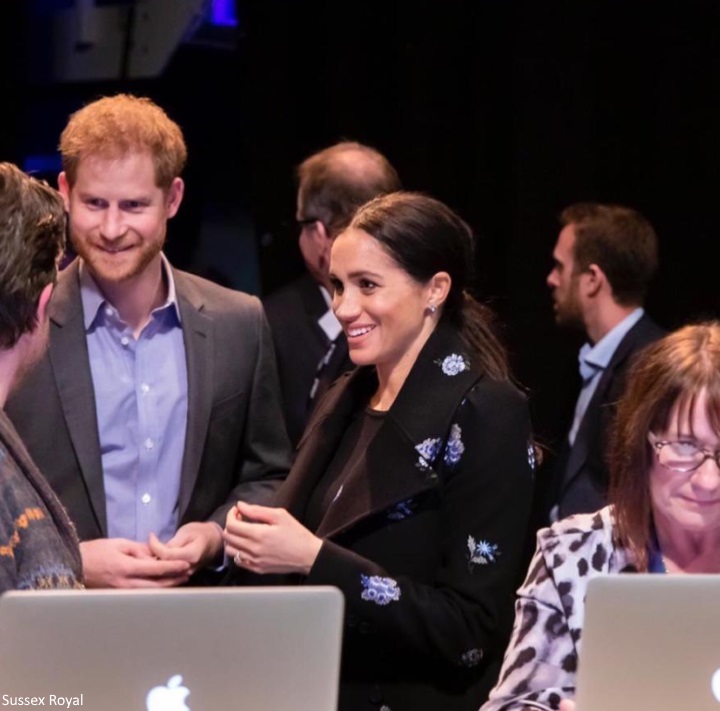 Shout has already proven it's a successful and much needed source of support. It was fantastic to hear 85258 Crisis Volunteers have had 145,000 conversations via text with people in crisis, exchanging 6 million messages.


Especially when we consider young people and teenagers, the option to text privately is often far more appealing, offering a safe, confidential space to share issues they may not necessarily feel comfortable doing so otherwise.

Volunteers simply log in from their home computer during their shifts, so the reception was a wonderful opportunity for them to come together and share stories. 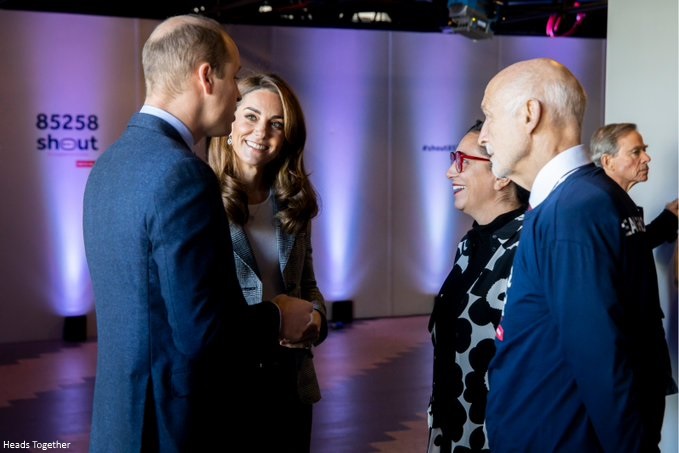 William and Kate met those who answered the public appeal to volunteer with the service. An amazing 13,000 people registered an interest with Shout following the appeal and 3,000 enrolled in training. William previously revealed he was planning to train as a volunteer. 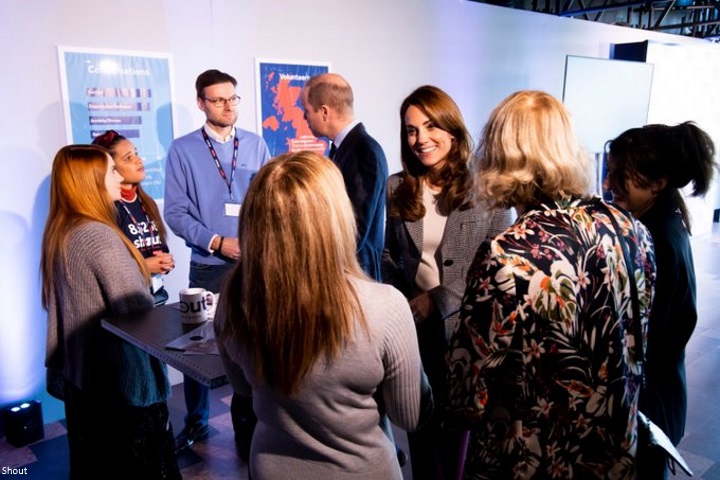 'Nancy Lublin, the Founder of Crisis Text Line in the U.S., told T&C that she was “so grateful” for how the royals have highlighted the service publicly and shared how they have also engaged in under-the-radar visits.

“They have been into our offices, I think, four times, at this point in time, quietly without anyone knowing,” Lublin said about the four young royals.'


Roya Nikkhah reports: "The Duke and Duchess of Cambridge continue to lend their support to the family of Molly Russell, who took her own life at 14 after viewing images of self-harm on social media. Today William and Kate spoke with Molly’s father, Ian, William telling him: “If we can help you in any way, please let us know".


The Duke and Duchess of Cambridge continue to lend their support to the family of Molly Russell, who took her own life at 14 after viewing images of self-harm on social media. Today William and Kate spoke with Molly’s father, Ian, William telling him: “If we can help you in... pic.twitter.com/tnDY7BHzLG
— Roya Nikkhah (@RoyaNikkhah) November 12, 2019

“After Molly’s death, like so many parents who find themselves bereaved by suicide, we set up a memorial charity in her name,” Russell told T&C. “One of our aims is to better connect young people who need help with the support services that are there to help them. And I can’t think of a better way of doing it than the way Shout does it."

He added: "Of course I wonder had it been available in the U.K. when Molly was desperately seeking help in 2017 maybe she would be here today.”


Kensington Palace said: "During the visit, the Duke and Duchess received a brief update on the scale and impact of Shout. Their Royal Highnesses heard that 75 per cent of people who contact Shout are under 25, and that the most frequent subjects raised in those conversations are suicide (37 per cent), depression (36 per cent), relationships (29 per cent), anxiety (31 per cent), isolation (19 per cent) and self-harm (17 per cent)." 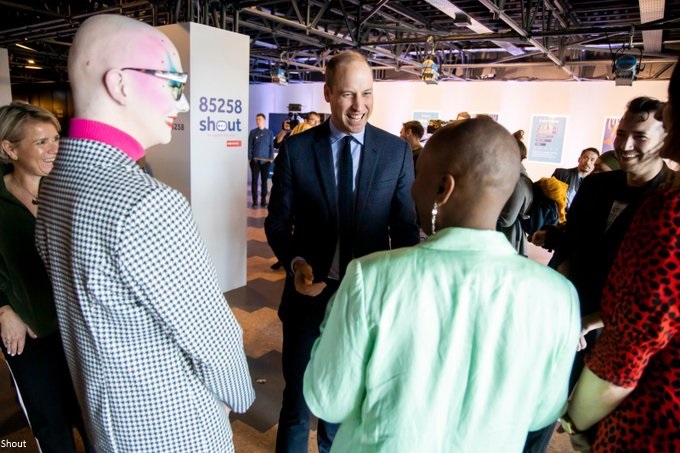 During a brief speech William said: “Catherine and I, and Harry and Meghan couldn’t be more proud of what Shout has accomplished. We’re hugely proud and hugely grateful to all of you for being part of this.” 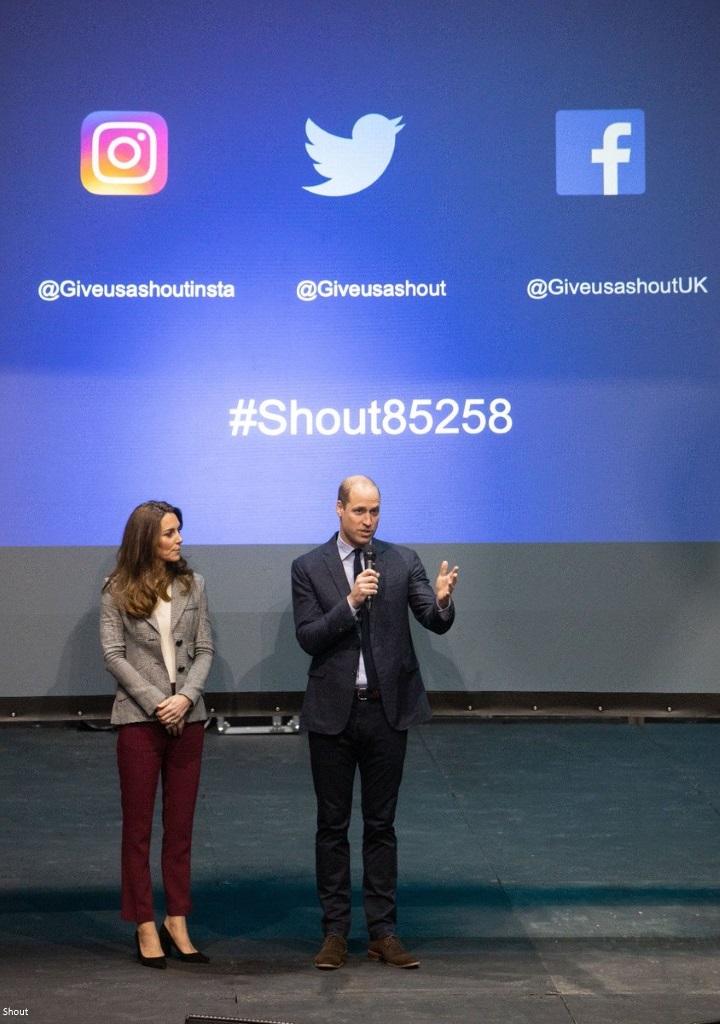 They joined volunteers in the theatre for a special performance before a group photo. 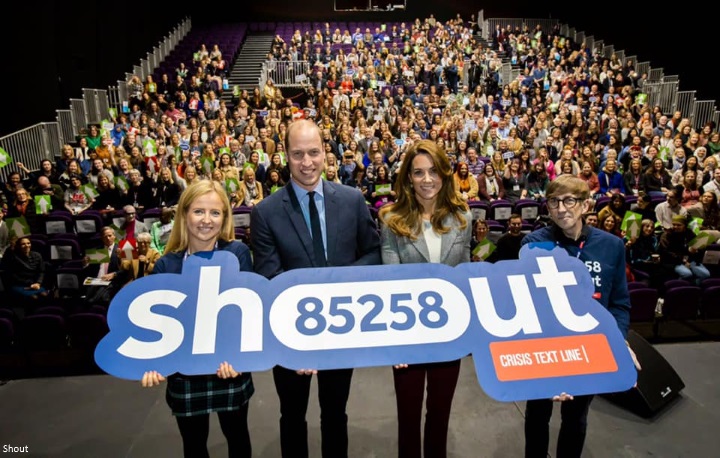 A video from the event.


Kate opted for a smart casual look today featuring her grey Smythe blazer, burgundy red trousers and block heel shoes. I think the combination of the grey and red work very well together, they are not two pieces I would have automatically put together, but the entire look has a professional feel to it and the shades are perfect for the current season. As we see Kate wear trousers more, it's interesting to see her preferred styling options. Today's is a favourite of mine, owing to the polished cut of the trousers (there's a matching blazer available for them, I hope Kate purchased it for a chic suiting look). 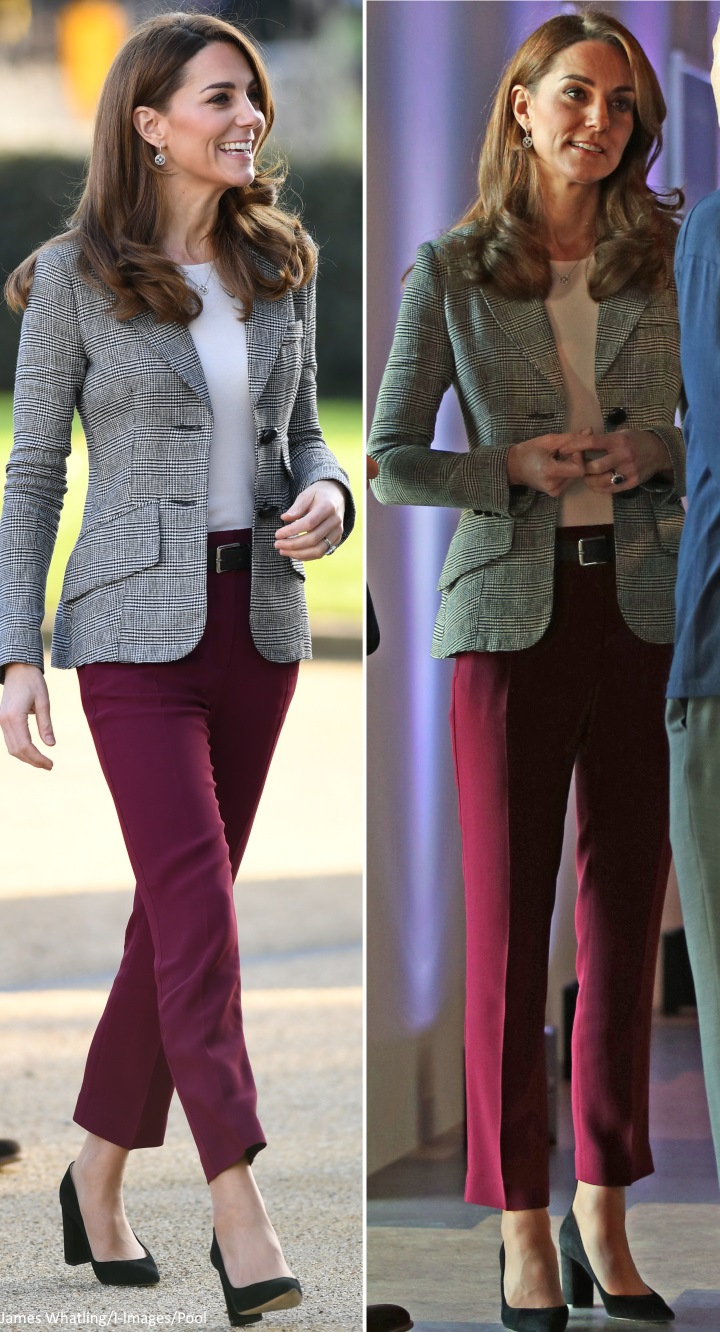 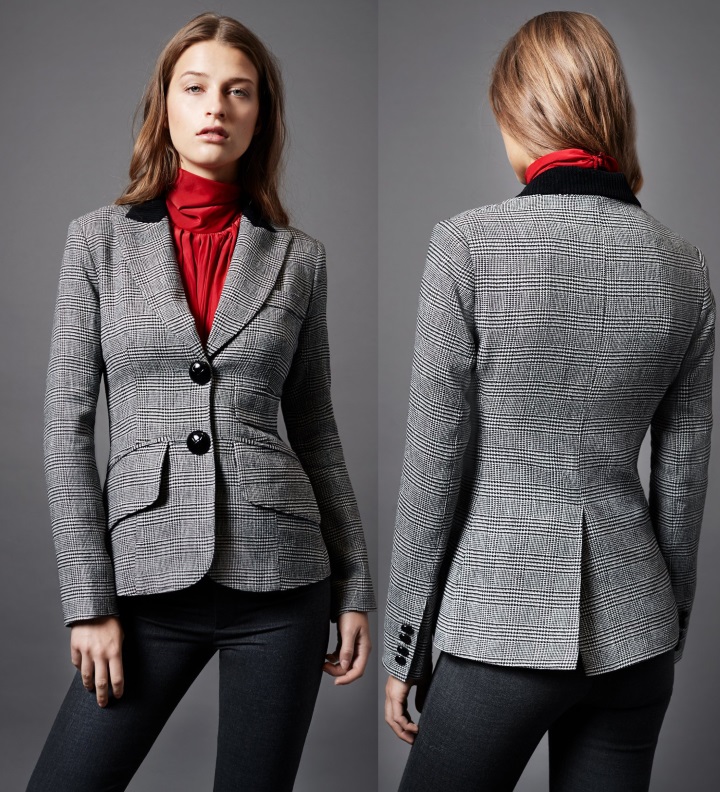 Kate's trousers are the Joseph Zoom Cady Slim Pants (with thanks to Caroline Parr). Described as "The slim-fitting Zoom pants from Joseph will anchor an array of looks, from day to night. Presented in a ruby hue, this Italian-made design is shaped with a mid-rise fit and falls into straight legs that slightly taper toward the ankle." They are currently on sale for £241 at My Theresa and available at FarFetch. 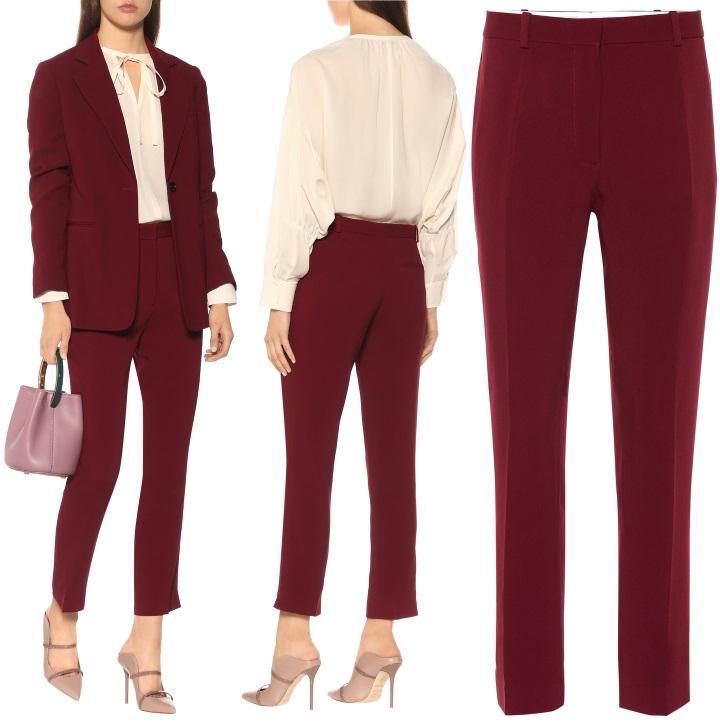 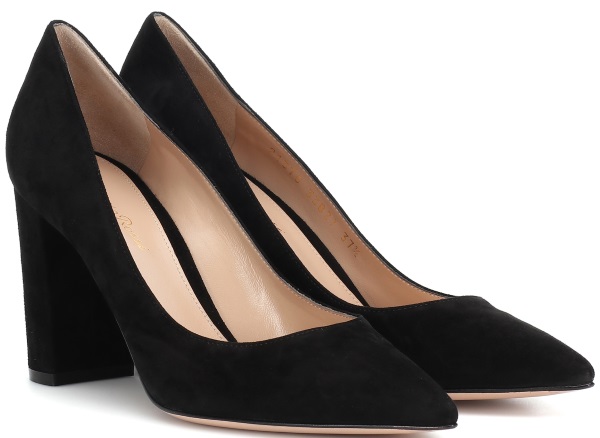 And accessorised with her Mappin & Webb earrings and pendant. 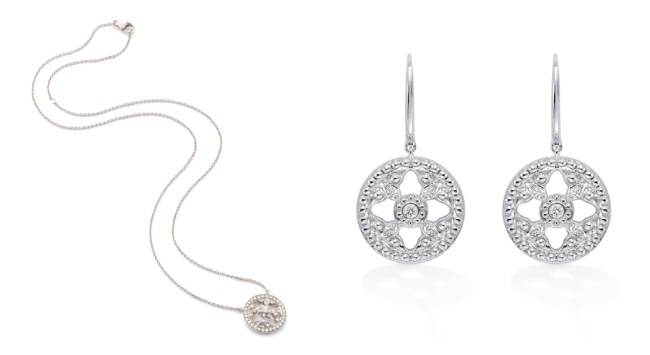 An overview of Kate's schedule including two evening gown appearances next week:

15 November - The Duchess of Cambridge, Royal Patron of East Anglia’s Children’s Hospices, will visit the charity’s new hospice ‘The Nook’ on Friday 15th November to meet children and families being supported by EACH, tour the hospice, and unveil a plaque to officially open the building.

21 November - The Duke and Duchess of Cambridge will attend the Tusk awards.


If you would like to find out more about Shout, please click here.
Posted by Admin at 10:43:00