When unexpected weather meant William and Kate couldn't travel back to Islamabad Thursday night, it meant a great deal of last minute logistical changes and the cancellation of a long planned trip to Khyber Pass on the Afghanistan border. With an additional morning in Lahore on Friday, the royal couple made a return to SOS Children's Villages. 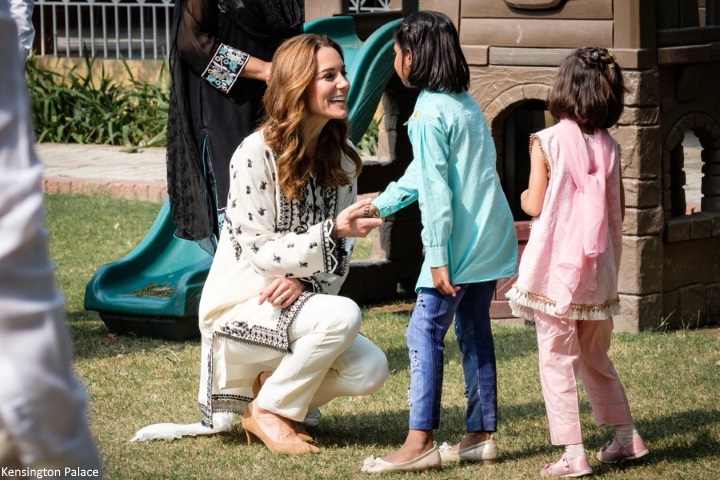 In her very first Instagram post, Kate wrote: "The community at the SOS Village is built around family - and the best possible family you could imagine - where everyone comes together to nurture, love and protect the children in their care. These vulnerable children, many who have come through traumatic circumstances, are nurtured in this caring environment and are able to form these quality relationships that they so desperately need to thrive." 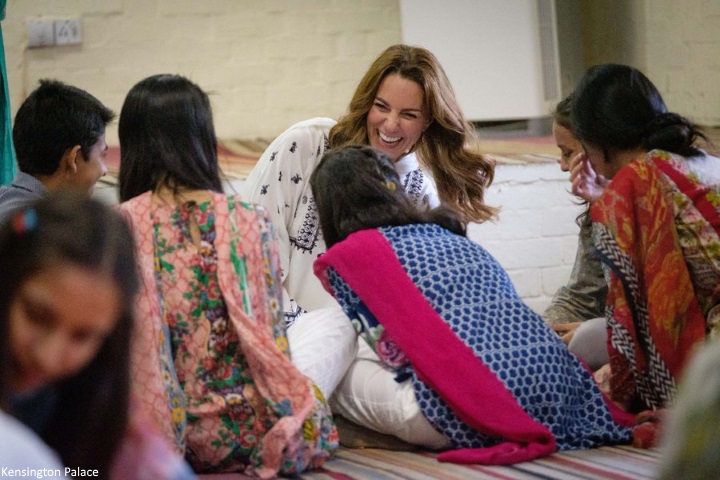 When the tour wrapped up, although I wasn't aware they had returned to SOS I mentioned the organisation had particularly resonated with Kate. The global organisation, with villages all over the world, looks after the most vulnerable children in society, offering them a family, safety, and a mother figure in their life. The UK branch was founded in 1968 and has been actively supporting their international work since. I would love to see William and Kate get involved with them and continue to champion their outstanding efforts across the many Commonwealth countries they work in. 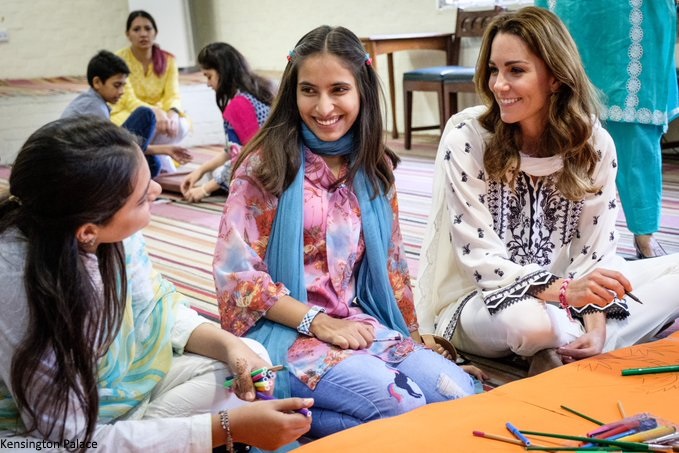 'On their return visit, the couple met some of the young “graduates”, who had been supported by the SOS Village and gone on to mentor some of its younger residents.
Saba Shahzadi, 28, said she came to SOS when she was eight and still lived there, acting as a mentor to the children, while working as a manager for Nestle in Pakistan. She told the couple: “I can’t even imagine what would have happened if I hadn’t found SOS.”

Simon Perry reports Kate noted: "Some of the things I’ve been looking at back home are how best do you support children and what do they need to have a successful life. One, it’s about quality relationships and two, the environment. What’s great is that you have both here." 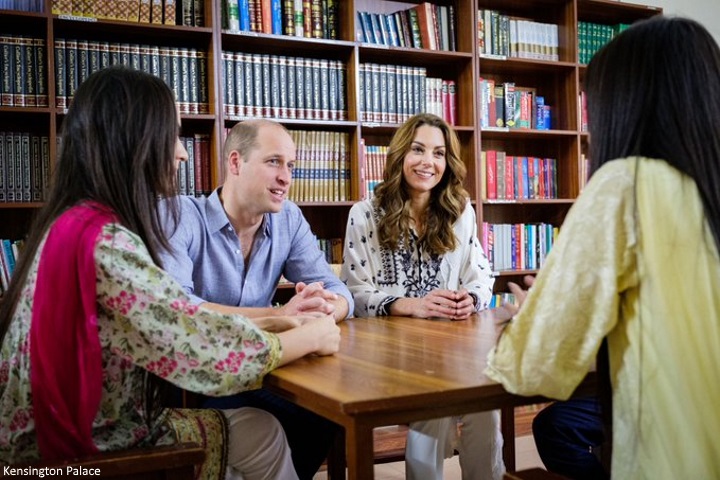 During the visit, the couple received friendship bracelets. 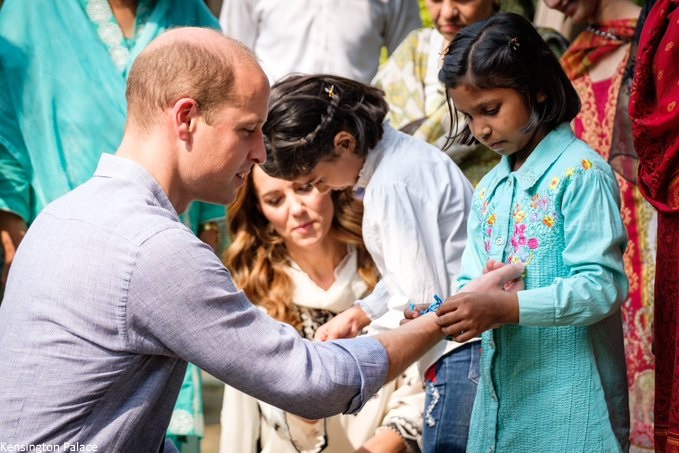 William said: "I won't take it off. My children will wonder why I'm wearing it." 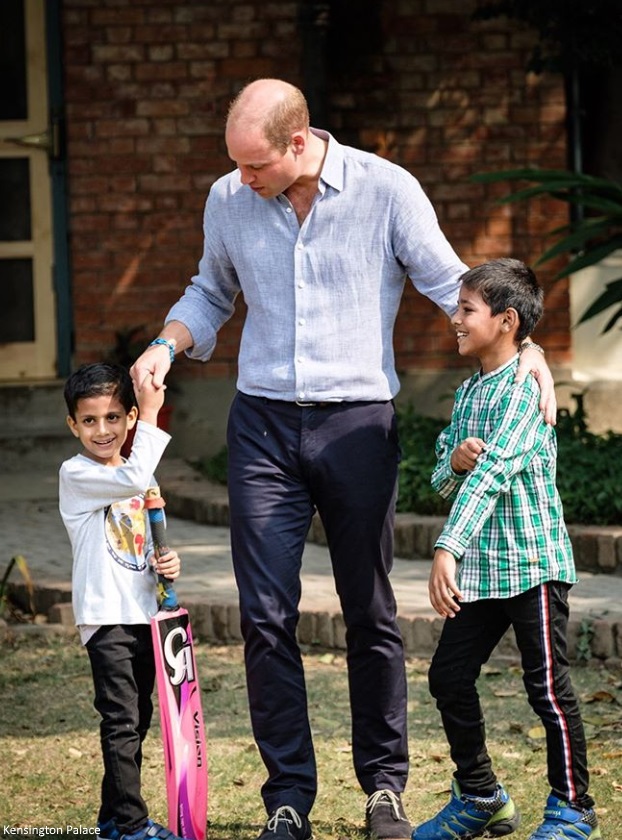 'Later, as they joined some of the children for an art group, William revealed Kate’s love of landscape photography. “Catherine likes taking lots of pictures. She does a few portraits, but mostly landscapes. When we went up to Chitral to see the glacier and then looked around, she took some great photos up there,” he said.

Kate — who, before the tour started, had been especially looking forward to visiting SOS — spoke about the fate that had enabled them to return. “I’m so glad we came back to get the full picture,” she said. And her husband added, “I could feel that there was more to talk about.”

He also gave credit to his staff: “Our team is very good at finding us projects.”


Time for a spot of cricket. 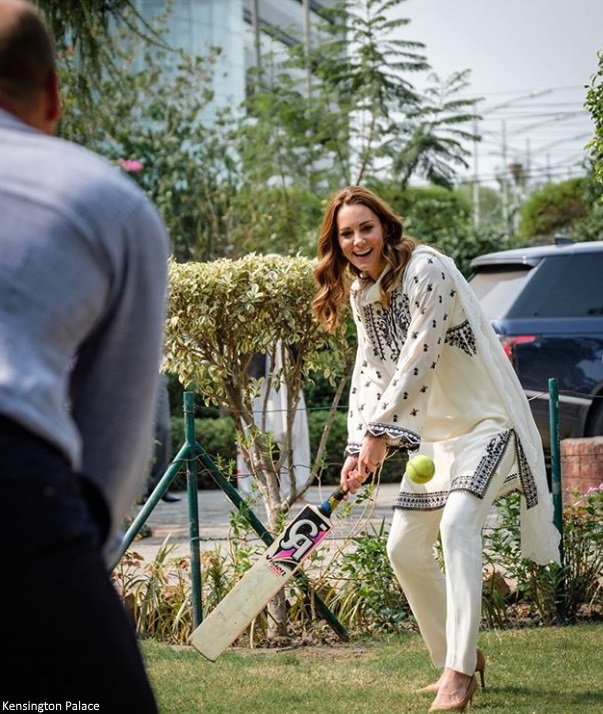 And a group photo to end the visit. 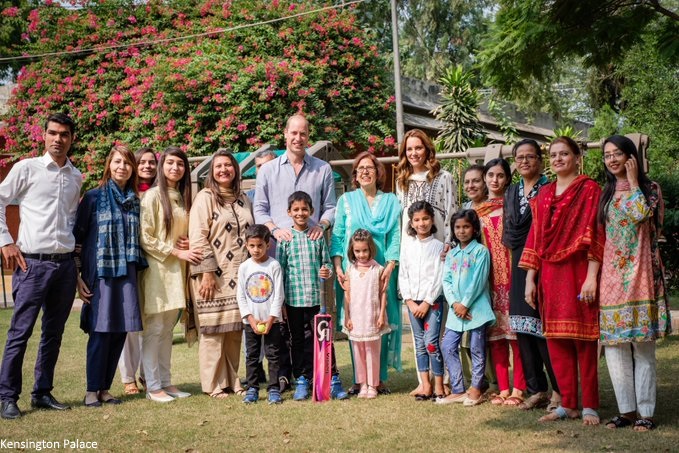 A video from the visit.


Additionally, the Sunday papers were given exclusive rights to share a series of images taken of a family by the Duchess during the tour. Unfortunately, they were not made available online (They have been posted on Twitter, click here to view them). More from the Telegraph:

'During the chance encounter, the Duchess stopped the convoy to greet and take pictures of locals who waved.

The Duchess, a keen photographer, had spotted the family during her trip to a glacier in Chitral. Speaking through an interpreter, she was invited into their hut for tea and asked the grandmother, mother and daughter about farming in a place where snow freezes for six months each year.The family had no electricity, running water and during the winter cannot leave their homes.

The Duchess borrowed a camera from the couple’s official photographer and the family posed for her pictures. She later also took pictures in the Kalash village of Bumburet which the couple later visited, watching colourful scenes of dancing in the village square.

She later said: “It was fantastic to meet these people living in such a remote place. They were so hospitable, offering William and me a cup of tea. It was a very special moment, they had no idea who we were which gave us a chance to see a different side of Pakistan!'


Kensington Palace shared this video marking the close of the tour (watch out for some rickshaw footage :))


A word of sincere thanks to those who commented on the tour coverage, I greatly appreciate it.
Posted by Admin at 19:32:00