"It's Been Really Special": The Cambridges Bid Farewell to Pakistan

The Duke and Duchess of Cambridge concluded their five-day official visit to Pakistan today. 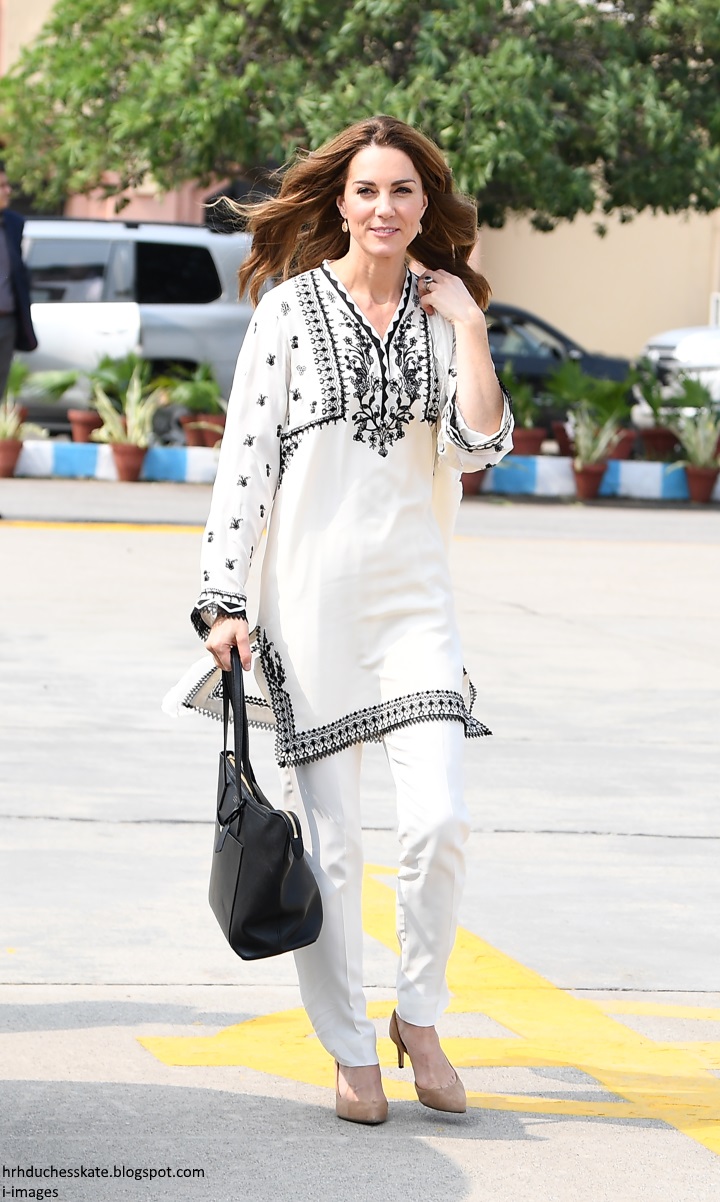 The trip concluded on a high note, with the couple speaking to the media and attending engagements. Behind the scenes, aides and officials from the British High Commission were presented with an incredible logistical challenge last night when the couple and members of the press were forced to return to Lahore en route to Islamabad due to inclement weather conditions. It meant several engagements had to be cancelled or rearranged, and last minute accommodation and security arrangements were put in place. 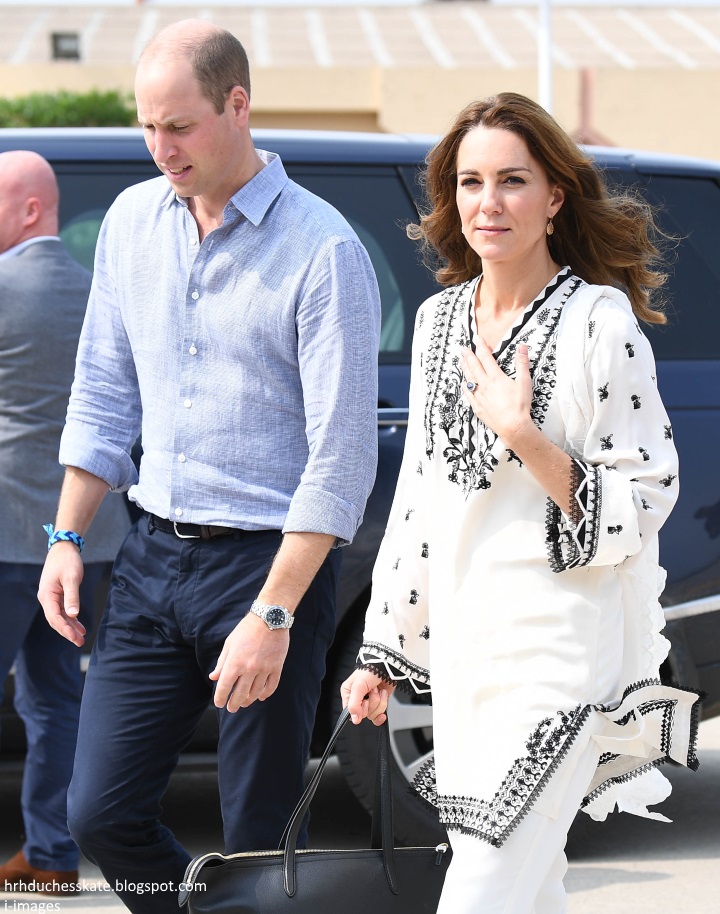 More from Rebecca English who was on RAF Voyager with the Cambridges:

'They touched down in Pakistan's capital at around midday - hours later than expected after a terrifying electrical storm forced their pilot to abandon the first attempted landing and overnight in Lahore.

Last night, British High Commission officials sprang into action to find the couple a hotel room, along with their entourage, security team and around fifty journalists - almost 100 rooms in all.

The couple privately thanked their RAF pilots and praised royal aides and British High Commission officials for coming up with an emergency backup plan so quickly and with minimal fuss.

William also personally insisted that journalists travelling with himself and Kate, who were also on the flight, came with them to the hotel and were found a bed for the night. 'The Duke's immediate reaction was that nobody was being left behind, we were all in it together. He was adamant about that,' a source said.'


Logistical changes meant a visit to Kyhber Pass, on the border with Afghanistan, had to be cancelled. The trip had been planned as one of the last engagements of the tour, not only to highlight the important strategic military location and trade route, but as an opportunity to see another important element of the country. Instead, the Duke and Duchess undertook a private engagement in Lahore before returning to Islamabad. Local reporters revealed they actually returned to SOS Children's Villages because they enjoyed their first visit so much. William was wearing a bracelet, which he was likely given by one of the children there. 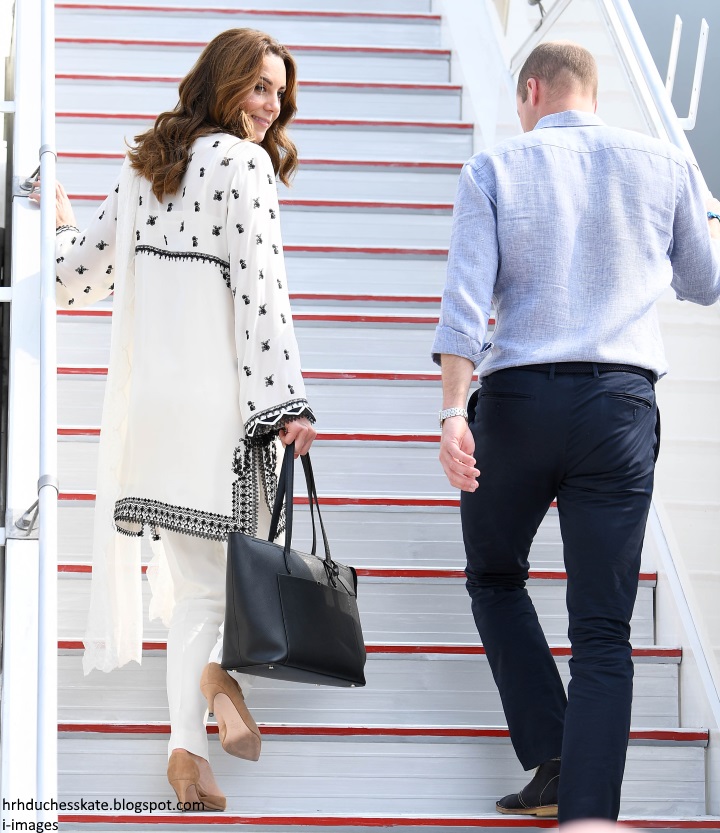 They concluded the tour surrounded by adorable puppies at Islamabad Army Canine Centre. 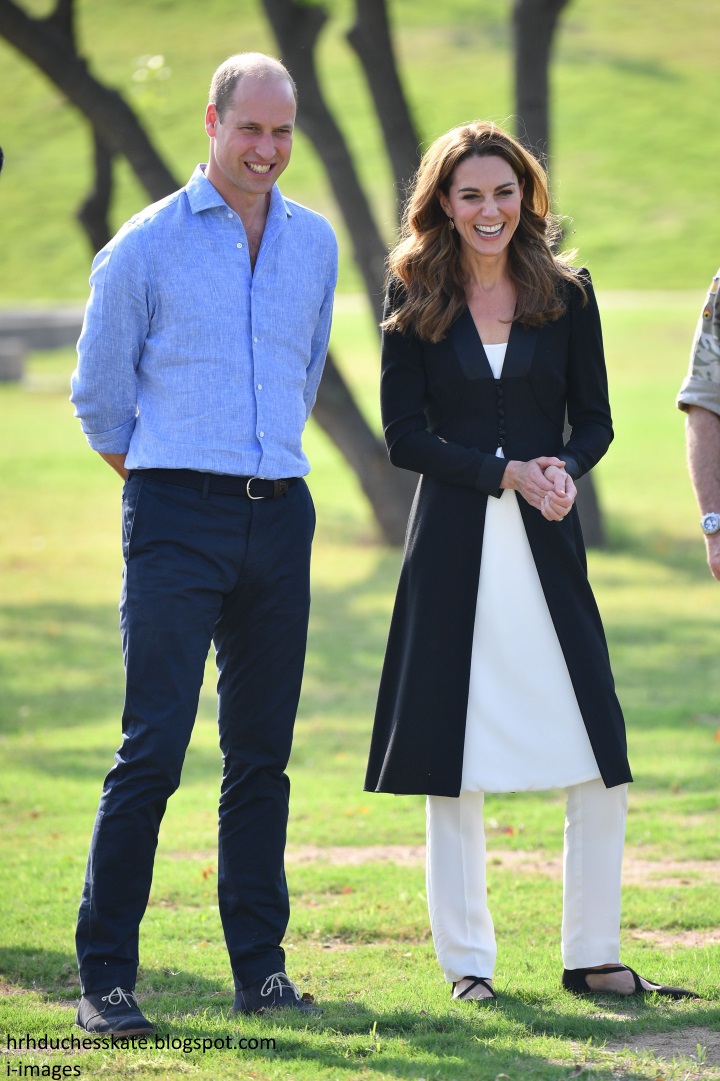 Before Prince George was born, Lupo was the Cambridges' first "baby". When they were living in Wales, we saw the cocker spaniel with the couple on beaches near Anglesey for walks. The royal family absolutely adore dogs, so this was a very fun one to wrap up with. 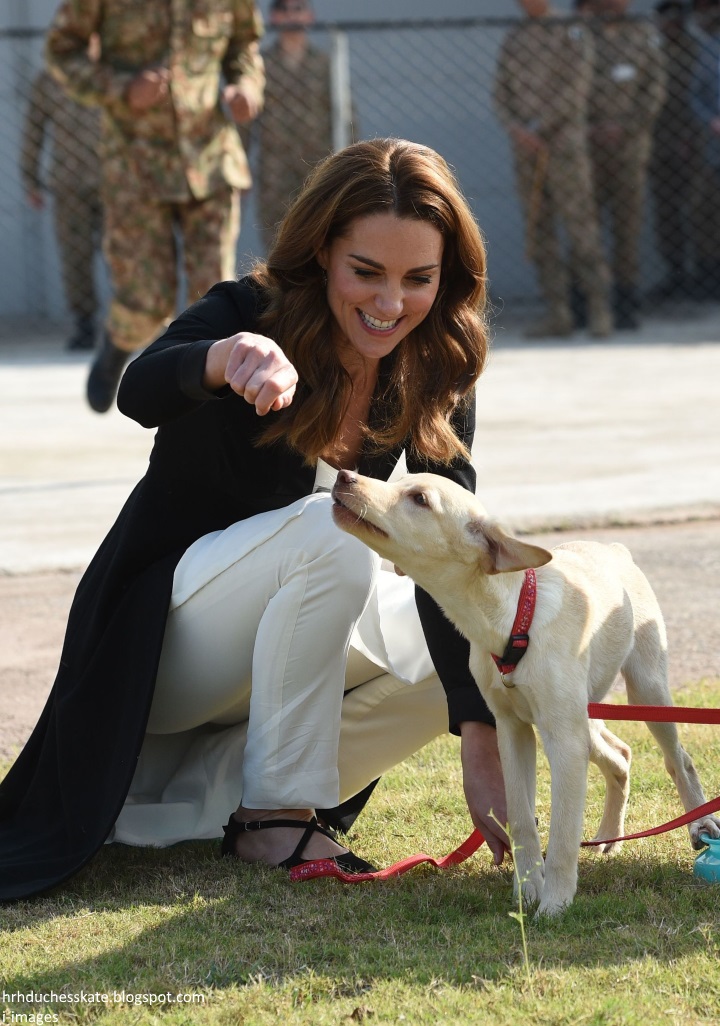 The Duke and Duchess took golden Labrador puppies Sky and Salto for a walk. 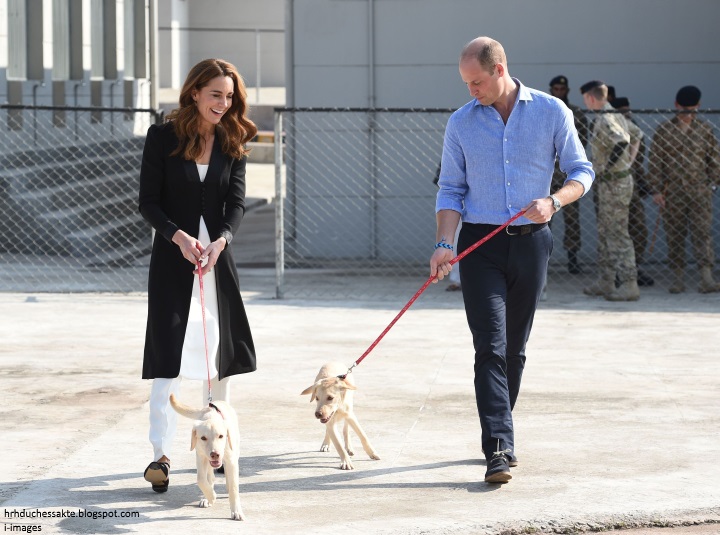 'The royals were at the Army Canine Centre in Islamabad, which mirrors the U.K. Defense Animal Training Centre in the English Midlands. In a relationship that goes back a decade, Britain has been helping the Pakistan Counter Improvised Explosive Device program as it aims to take on the ongoing security challenges of the region.

Part of that alliance with the U.K. is the breeding and training of dogs to identify explosives. Pakistani officers say the dog program has been a huge success, finding 19 tons of explosives and 700 homemade bombs in the past three years. Bomb incidents have fallen 30 percent since 2015.'


They were shown training areas and discussed the successful impact the dogs have made. 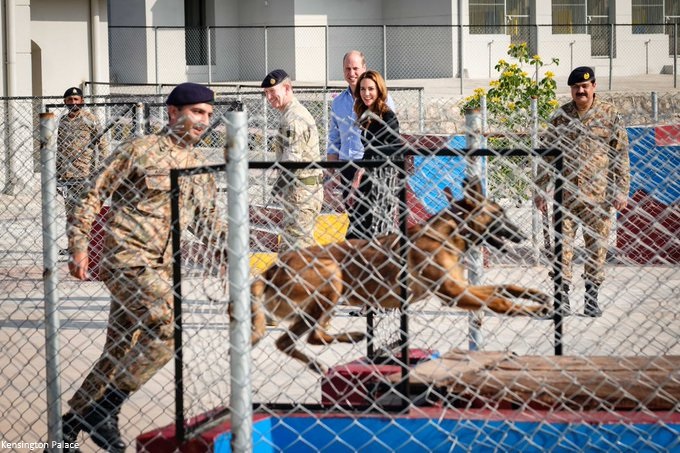 Some of you have been suggesting we'll see another addition to the Cambridge household. My money's on a pet Labrador sooner rather than later :) 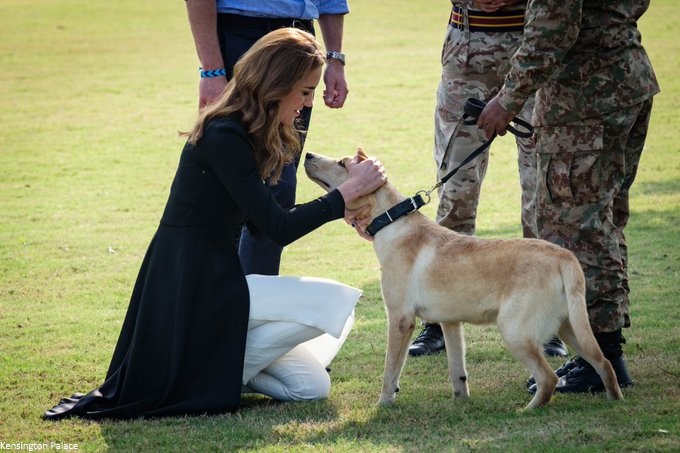 Afterwards, the couple briefly spoke to media outlets who had accompanied them throughout the trip. William said: "The whole week we have been hearing about security in Pakistan and it’s really brought home to Catherine and I the importance of the relationship between the UK and Pakistan. A lot of lives have been lost by the Pakistanis in securing large parts of this country over the years and those sacrifices from the Pakistanis should be acknowledged. It’s been a huge, huge undertaking for them. Actually, what happens here in Pakistan directly correlates to what happens on the streets of the UK. We are involved with the Pakistanis for a very good reason: it will actually keep people safe back in the UK." 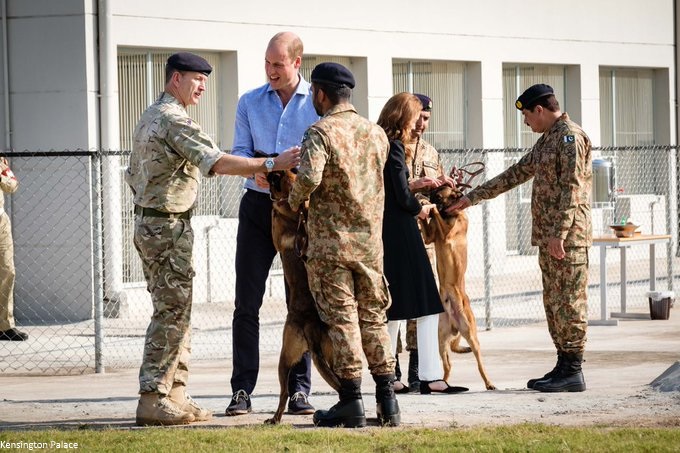 The Duchess recalled the turbulent departure from Lahore: "I think it was quite an adventure really, it was pretty bumpy up there. But we were looked after so wonderfully by the RAF who did a great job liaising with everyone and got us home safely, so we are hugely grateful to them." 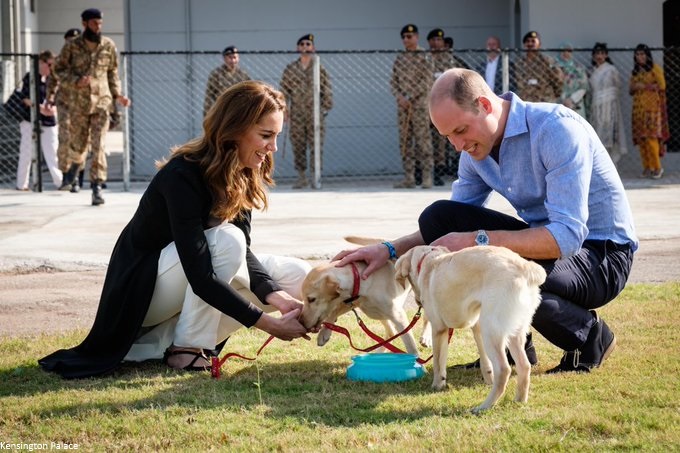 The full interview is included in the video below.


The Duchess also spoke exclusively to CNN's Max Foster at SOS Children's Villages yesterday: "I think William and I really wanted to come and see an SOS Children's Village like this. There are so many vulnerable women here but they really use their positivity. The support the village here provides them really to support and protect the next generation. The children in their care and give them the best possible start to their future lives." Regarding the visit, Kate said: "It's been fantastic, we've seen a lot of Pakistan. There's been a huge variety. It was amazing seeing some of the geography, but then to see some of the community activities like this has been really special."

Catherine, Duchess of Cambridge, spoke to @MaxFosterCNN in an exclusive interview during her five-day tour to Pakistan along with Prince William. This is her first interview since she became a part of the royal family.https://t.co/rlhWr9Lcy7 pic.twitter.com/utQumgiD3S
— New Day (@NewDay) October 18, 2019


It's been fascinating to learn more about Pakistan throughout the tour; the causes, culture, people and traditions. The Palace and British High Commission organised a beautiful itinerary despite security challenges. It was Kate's first Commonwealth tour in over three years, and I very much hope it marks the first of regular visits across many member nations in the years to come. The links between the monarchy and the Commonwealth are so precious, it's vital to continue those relationships. We saw the couple follow in Diana's footsteps with poignant moments along the way. I think Kate was particularly touched by the work of SOS Children's Villages. Supporting the most vulnerable children ties in perfectly with her work at home. I was so pleased to hear Kate give a speech and her first tour interview. Hearing from the royals directly adds so much context to overseas trips. They received a wonderful welcome in Pakistan. Someday George will visit and retrace his parents' footsteps; that sense of continuity is something I love about the monarchy. 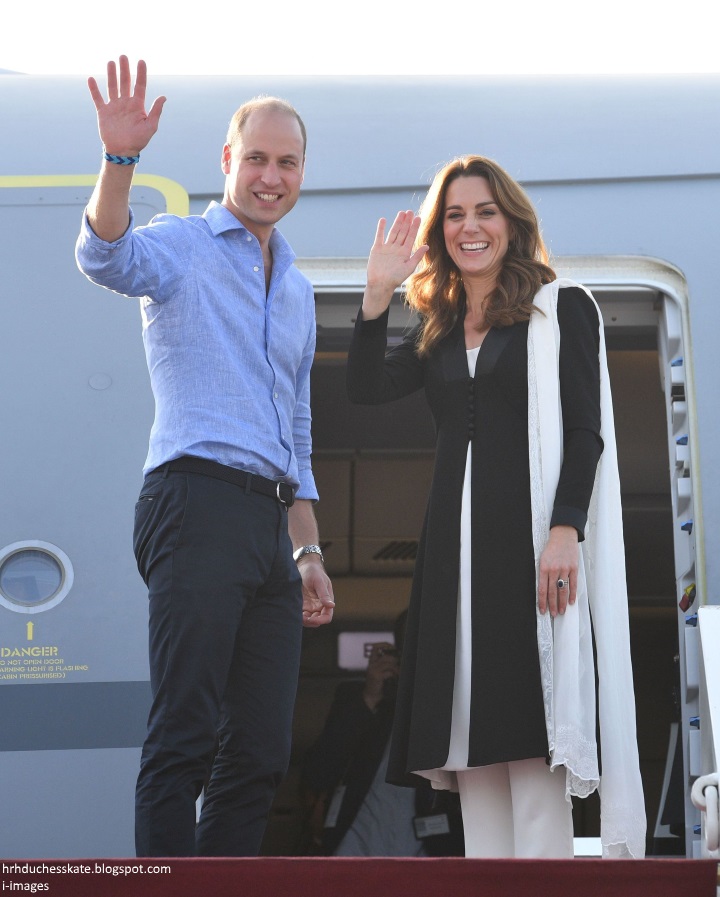 Sartorially, Kate embraced traditional looks with an array of shalwar kameez, kurta, dupatta and other pieces from local designers such as Maheen Khan and longtime favourites Catherine Walker and Jenny Packham. The majority of Kate's looks were bespoke with accessories and shoes from her own collection and Pakistani brands. We saw several shades of green honouring the country's flag, along with periwinkle blues, white and black pieces. It was a treat to learn about new designers and to see the styles on Kate. Which pieces were your favourites? Today's first look and the show-stopping Jenny Packham gown take the crown for me.

For her final looks of the day, we saw ensembles featuring pieces from several designers and brands. For the departure from Lahore, Kate wore a gorgeous black and white embroidered kurta by Pakistani fashion designer Élan. It was worn with matching white trousers. 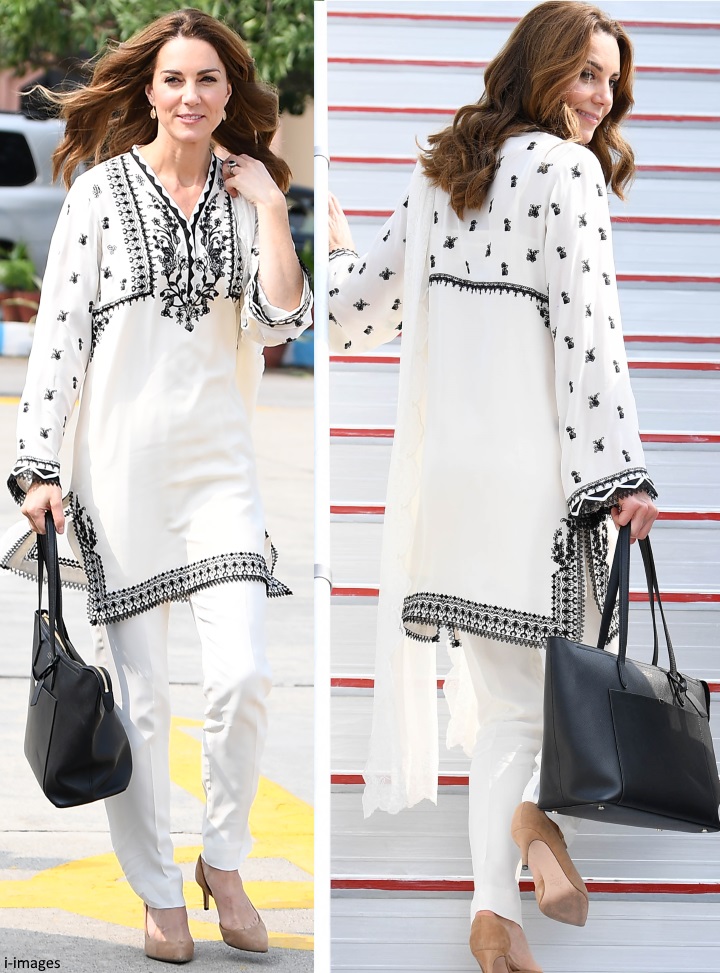 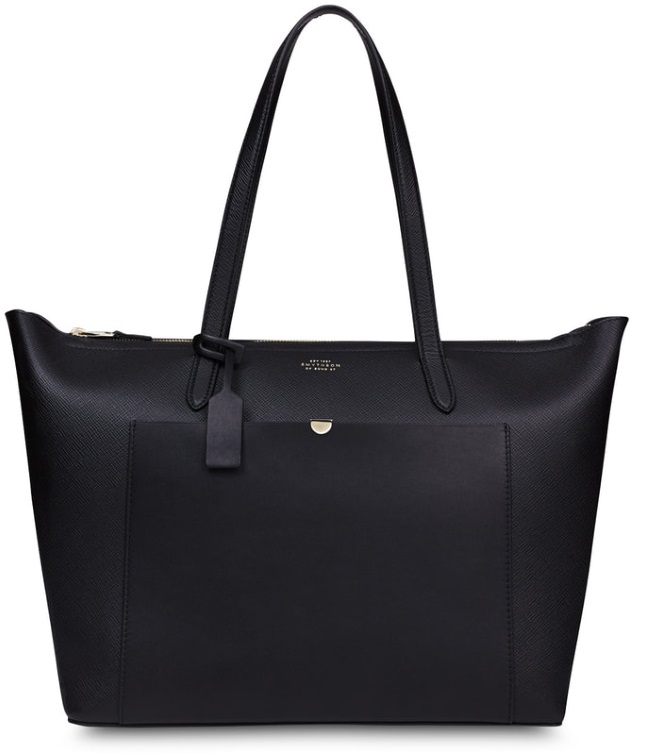 And accessorised with a pair of her earrings, thought to be the Accessorize Filigree style. 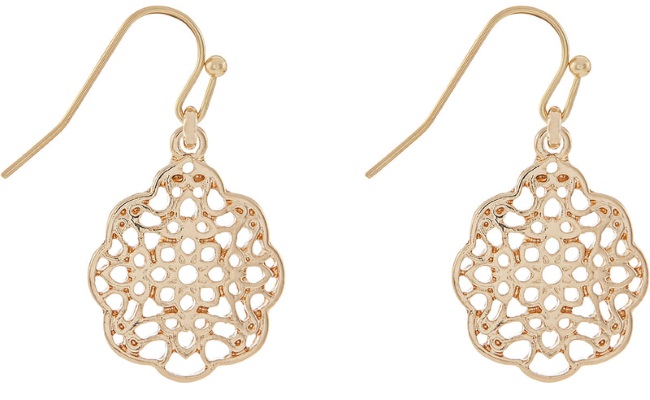 After much searching, it's been determined the new J Crew pumps Kate has been wearing during the tour are the Lucie pumps (a big thank you to Kate's closet who discovered they are also known as the 'Colette'). The $220 D'Orsay suede pumps are available at J Crew (25% off with code BUNDLEUP).

Kate changed from her kurta to the Beulah London Papilio jacket from their Autumn/Winter 2014 Collection. It's possible Kate's had the piece for several years. 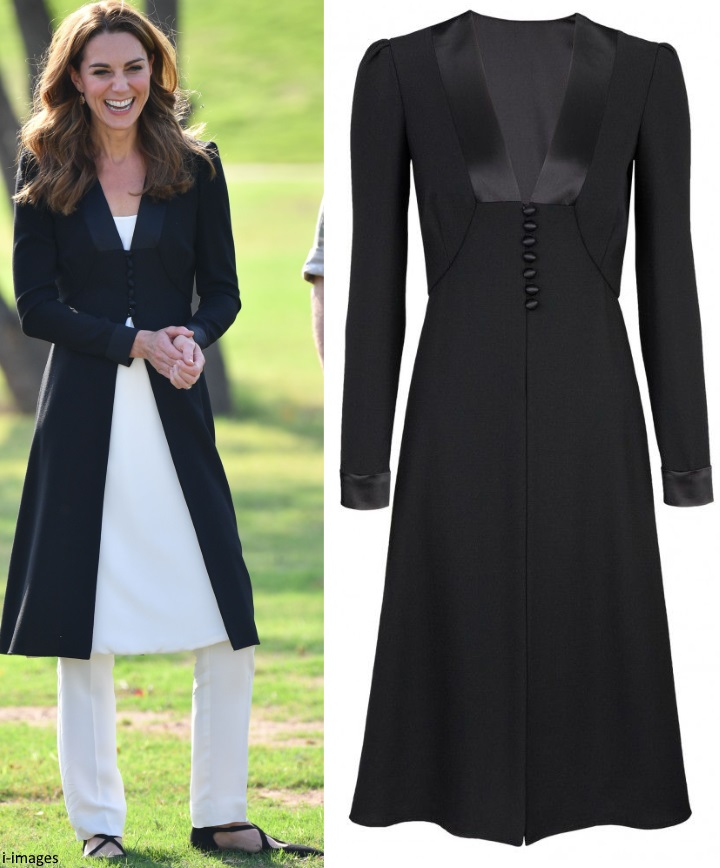 The Duchess also changed into a pair of £195 Russell & Bromley Xpresso crossover flats in black.

A huge thank you to Andrew Parsons, Stephen Lock and all the photographers who provided amazing photography every day. I also want to sincerely thank everyone who followed on the blog and commented, and from those on the ground in Pakistan who shared background information and local excitement.
Posted by Admin at 09:35:00