The Cambridges Visit The Mountainous Region of Chitral

The Duke and Duchess of Cambridge travelled to the mountainous region of Chitral for the third day of their official visit to Pakistan. The visit focused on climate change and meeting as many people as possible. Kensington Palace told reporters to expect "a colourful and fun introduction to rural life", adding the couple "hope to shine a light on the very real consequences of global warming and its devastating effects on our planet." 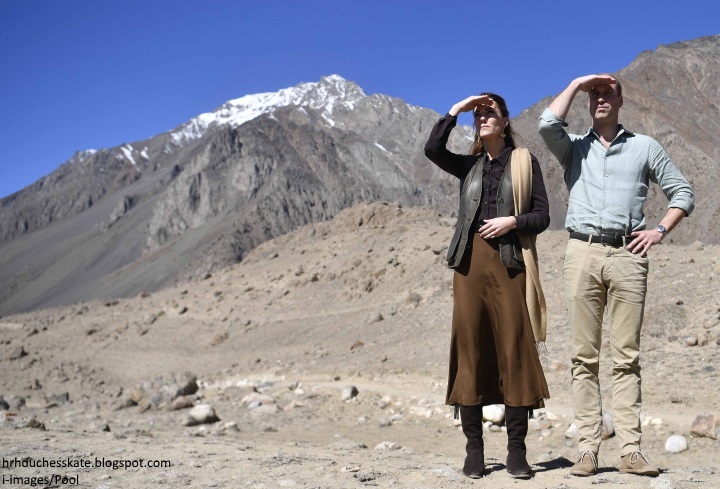 Upon arrival at Chitral airport, the Hindu Khush, near the Afghan border, they were warmly greeted with traditional Chitrali hats, a coat and embroidered shawl. Rebecca English reports Kate said "It's amazing - all that embroidery". 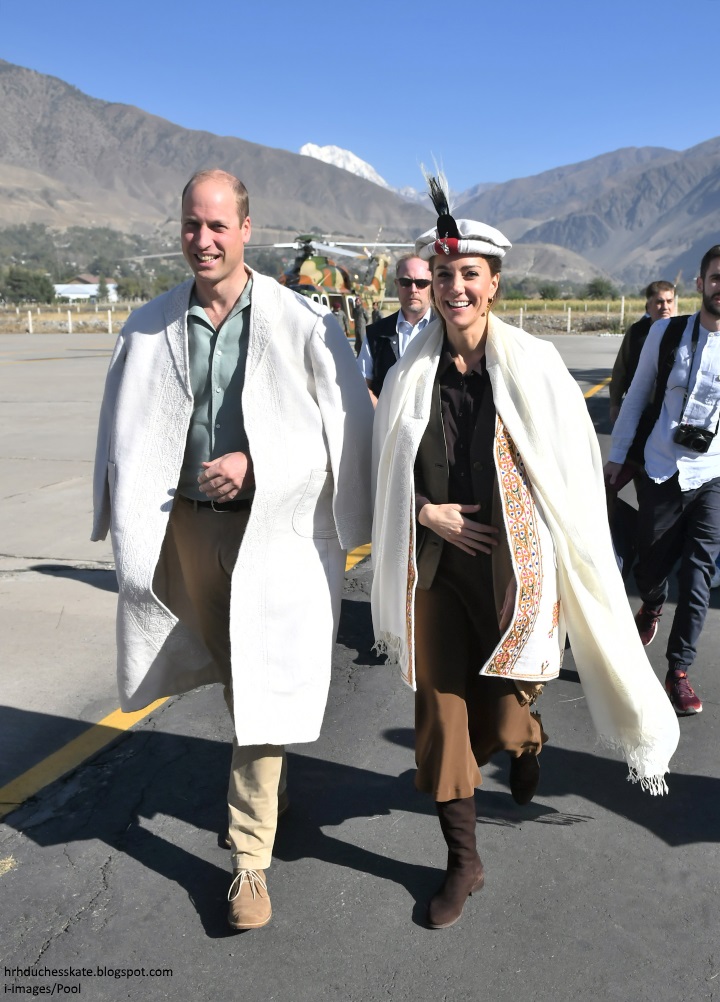 They were retracing Diana's footsteps - something hosts had considered - presenting the Duke and Duchess with a book of photos from her visit to the region during her 1991 solo tour of the country. William looked through the pages and joked "The same hat". Kate added she thought it was "very special".

It is the cap of the Chitral Scouts regiment of the Pakistan army. It's normally only worn by men, but exceptions are made for special guests in the country. 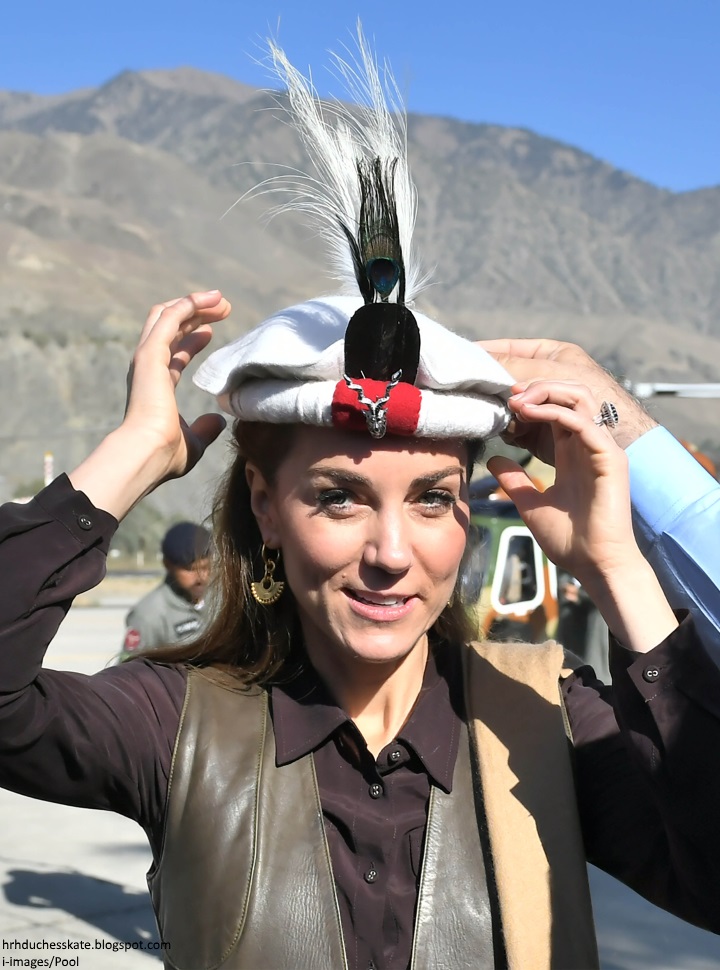 'The mountainous province of Khyber Pakhtunkhwa has been plagued by militant activity in recent years and the Foreign and Commonwealth Office advises against all travel to some areas and all but essential travel to other parts around Chitral.'


From there, William and Kate walked on the northern tip of the Chiatibo Glacier in Broghil National Park. 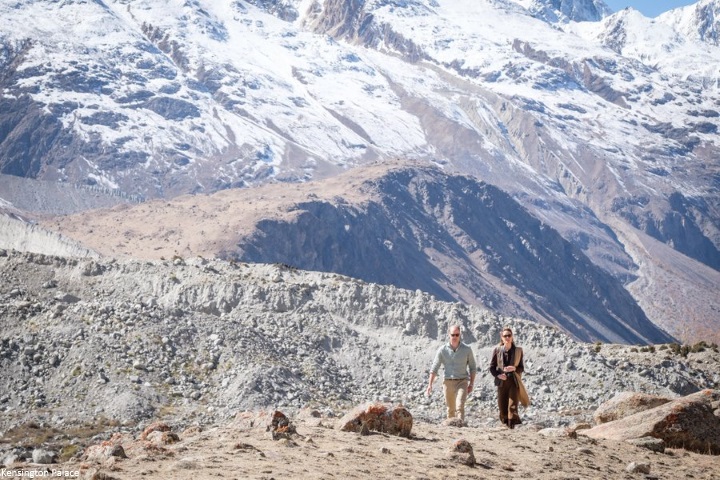 It was an opportunity to see a melting glacier first-hand and the alarming effects of climate change. 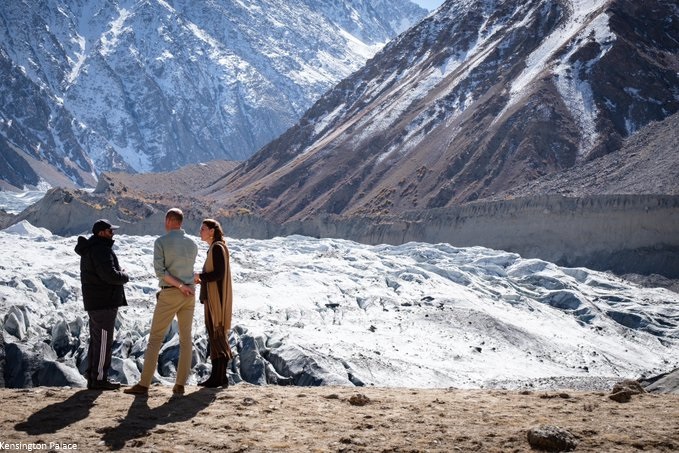 'The Duke said communities “vulnerable to change” needed “more education, more awareness and political action”. “The young are starting to get engaged in it,” he said, adding that a “positive conversation” around climate change was required.

His background in geography, which he studied at the University of St Andrews , was also mentioned during the engagement with expert Dr Furrukh Bashir, as his wife teased him about his knowledge.

The Duke said: “Dr Warren, my geography teacher, would be well impressed that I’m back at a glacier after all these years.” “I’ve been very impressed by William’s geography,” Kate replied.'


CNN reports:"Climate change is eating away Himalayan glaciers at a dramatic rate, a new study has revealed. Spanning 2,000 kilometers and harboring some 600 billion tons of ice, Himalayan glaciers supply around 800 million people with water for irrigation, hydropower and drinking. But they have been losing almost half a meter of ice each year since the start of this century - double the amount of melting that occurred between 1975 and 2000 - according to the Columbia University researchers behind the study." 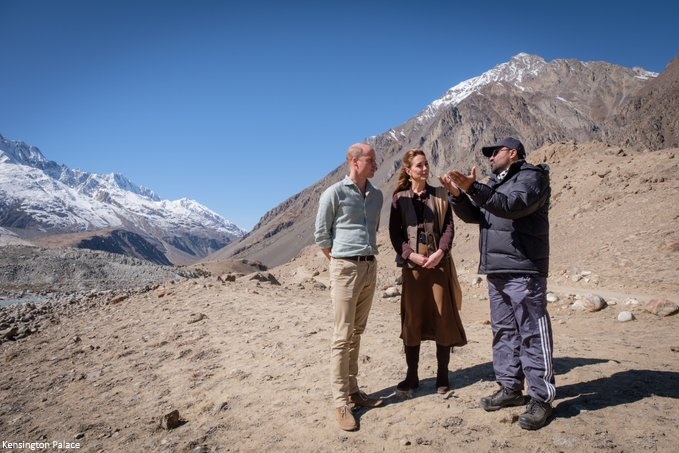 What effect is it having on the ground? A profound one. Researchers say the glaciers are losing 8 billion tons of water a year - the equivalent of 3.2 million swimming pools every day. As the ice melts, it forms glacial lakes which can cause devastating floods. 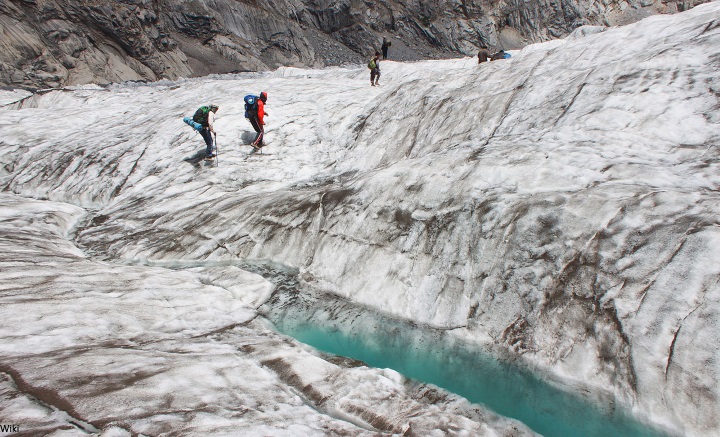 With this in mind, the next engagement saw William and Kate visit Bumburet village which has been severely impacted by flash flooding. 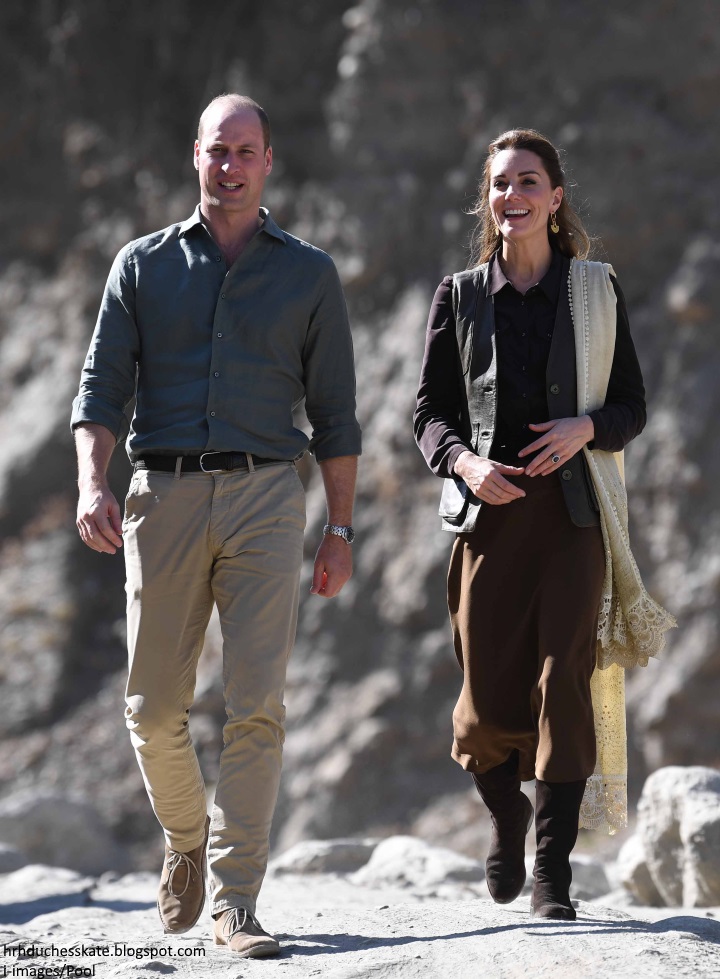 They met people who lost their homes and farmlands during a particularly heavy spell in 2015. Often times, climate change is discussed as an issue for tomorrow. The reality is very much the opposite. The difficulty experienced in the area William and Kate visited is a mere glimpse into issues people all over the world are experiencing today. 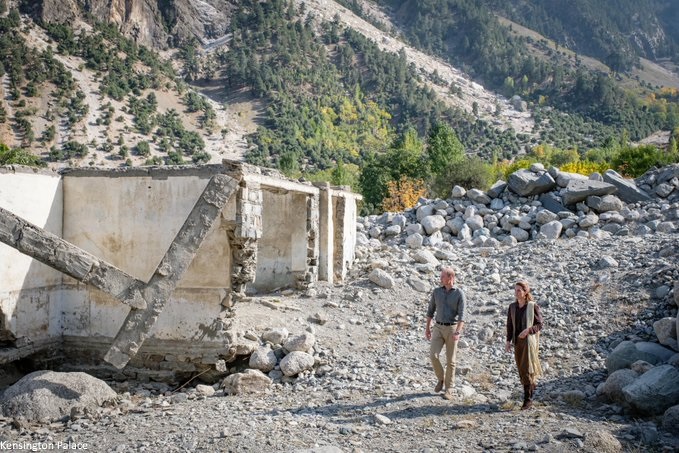 They met a local Emergency Response team and watched them undertake a drill. More from The Belfast Telegraph:

'The couple spoke with 28-year-old Diana – a young woman from the area who was named after William’s mother Diana, Princess of Wales. Through a translator, it was explained after the duke and duchess had left that Diana’s grandmother travelled to Chitral to meet the princess during her visit in 1991.

“Princess Diana was visiting at around the time she was born, which is why she got named Diana,” the translator said. “And now her son is William. “Her grandmother went to meet Princess Diana in Chitral, her mum was unable to travel because she was expecting her.'


William told members of the media "We have seen around the world now, the young are getting very engaged with what's going on, I think it's fantastic we can come together and have a really good conversation about what we need to do and action needs to happen."


Their final engagement in Chitral took them to another village to learn about the Kalash people's traditions and heritage. 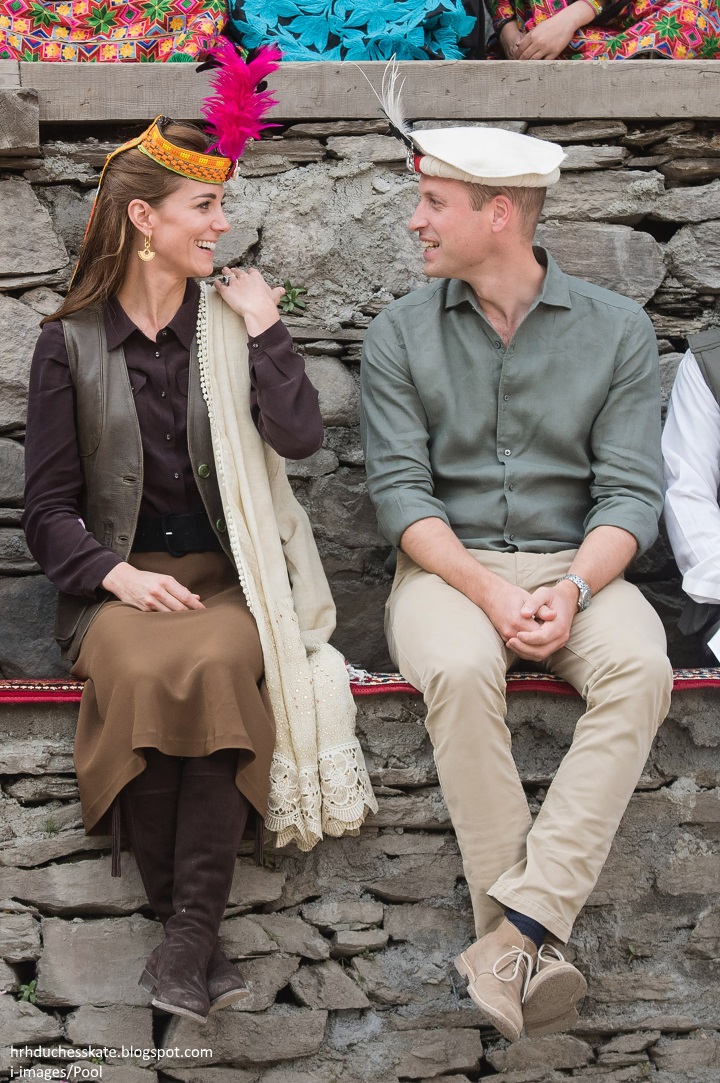 They were given traditional headwear. 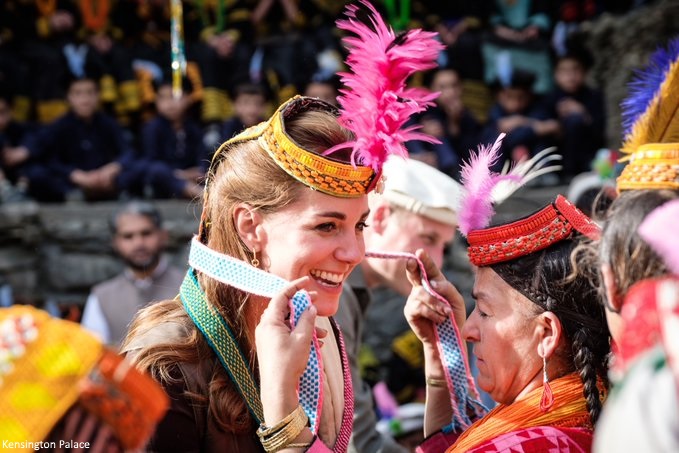 It was a beautiful, vibrant welcome. 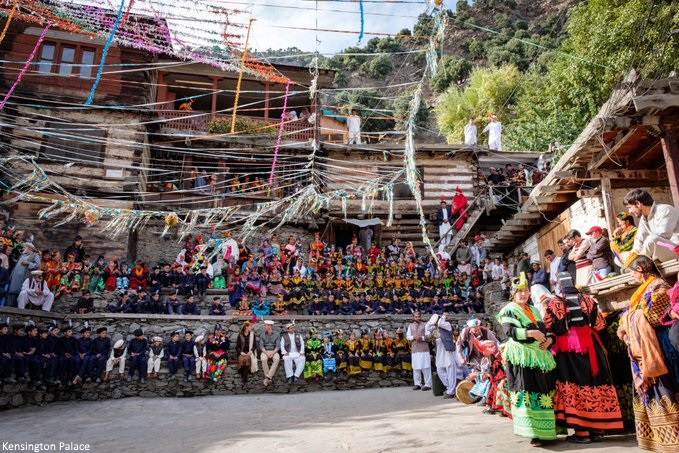 Reporter Chris Ship joined the couple. "The Kalash people are a non-Muslim minority population. In fact, their religion pre-dates Islam. They are culturally and ethnically distinct, descendants of Indo-Aryan tribes." 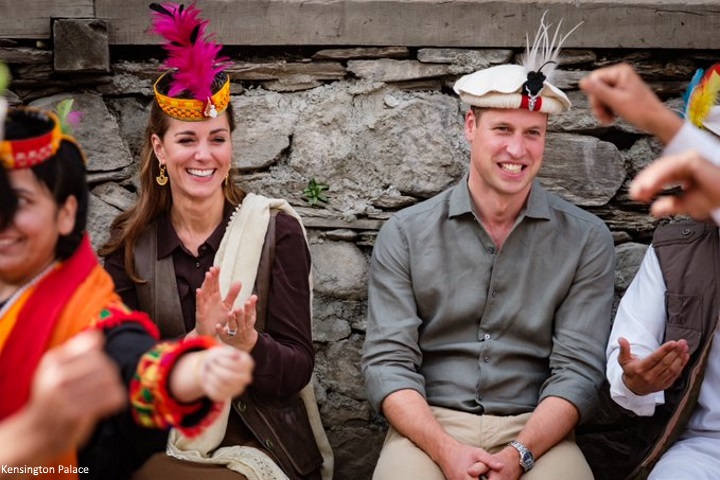 Chris Ship added: "The villagers are some of the nicest people you could meet". 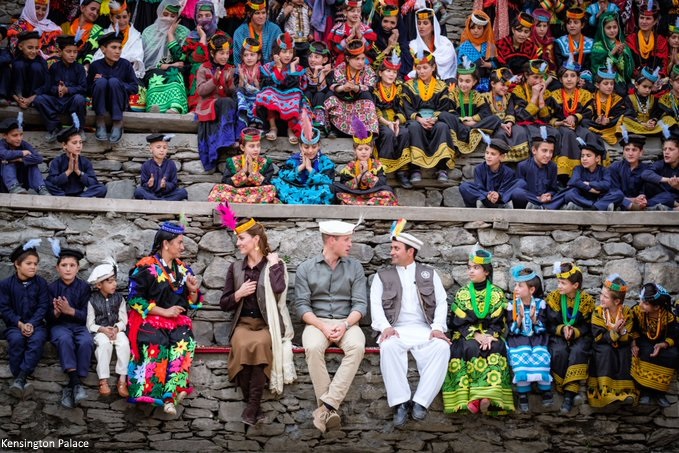 Video: Kate learned how to say “hello” in Kalasha (“ishpata”) and had a go at thank you too. The people were so incredibly friendly & welcoming but climate change is really affecting them. Their village was destroyed by floods 5 yrs ago & they worry it’ll happen again. pic.twitter.com/oHfKSQx9K6
— Emily Andrews (@byEmilyAndrews) October 16, 2019

Kate brought something special from home. More from People:

'The couple visited a village in the Chitral district on Wednesday, where Kate was spotted carrying her own camera. Kate has previously dubbed herself an “enthusiastic amateur photographer,” with her favorite subjects being her three children: Prince George, 6, Princess Charlotte, 4, and Prince Louis, 1. From birthday portraits to first day of school photos, Kate has been documenting all of her family’s big moments for years.'


Below, a segment of a very insightful article on the Kalash way of life and challenges ahead from Kohi Marri:

'The Kalash have withstood much persecution through the ages. At one point, they feared total annihilation at the hands of other communities, so they abandoned their villages and moved into caves for an unspecified period of time.

Weather has been their other big enemy. Winter is unforgiving in the high mountainous valleys of Chitral. The cold is worsened by incessant rain and landslides that force everyone indoors for months.

Tough physical conditions are only a part of the problems that local residents face. Healthcare facilities are non-existent and children walk on foot for many kilometres to attend school. They mostly survive on subsistence farming and livestock-rearing, but the two activities suffered a severe jolt due to heavy floods in 2010. The impact of the disaster is still visible in the shape of destroyed irrigation facilities and smashed bridges across streams.

Hussian says he has seen his valley change over the years. Roads, admittedly narrow and often dilapidated, have linked the Kalash region with the rest of Chitral and nearby districts of Dir, and then onwards to Peshawar and Islamabad. The availability of motor transport has allowed the Kalash to move to big cities, both for education and work. Their numbers in their own land, therefore, have been dwindling rapidly — from 50,000 or so back in the 1990s to around 4,100 now.'


A video from the visit.


My favourite photo from the day. It was a delight to see so many elements of Chitral. 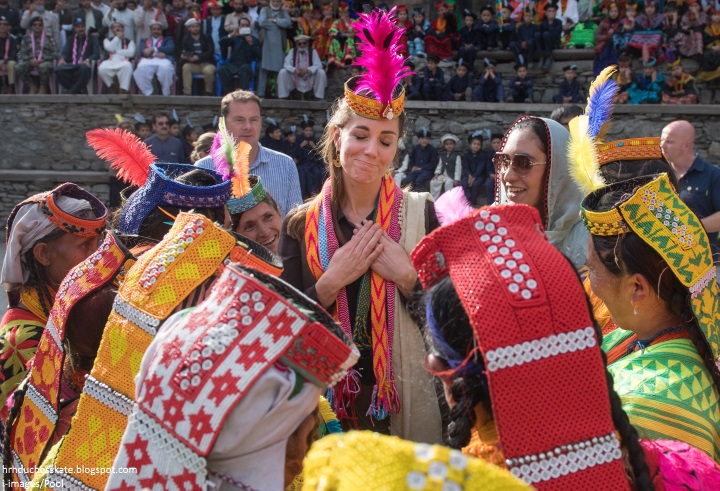 The Duchess sported several separates including familiar pieces. Kate teamed a dark brown shirt with a tan midi-length skirt and a traditional scarf. 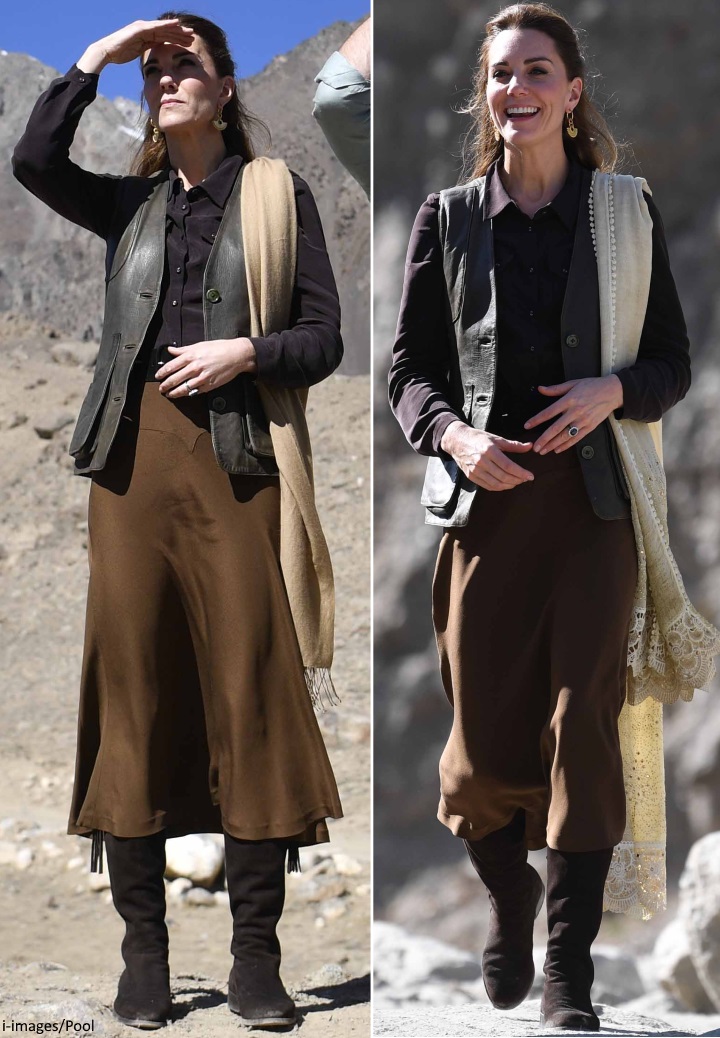 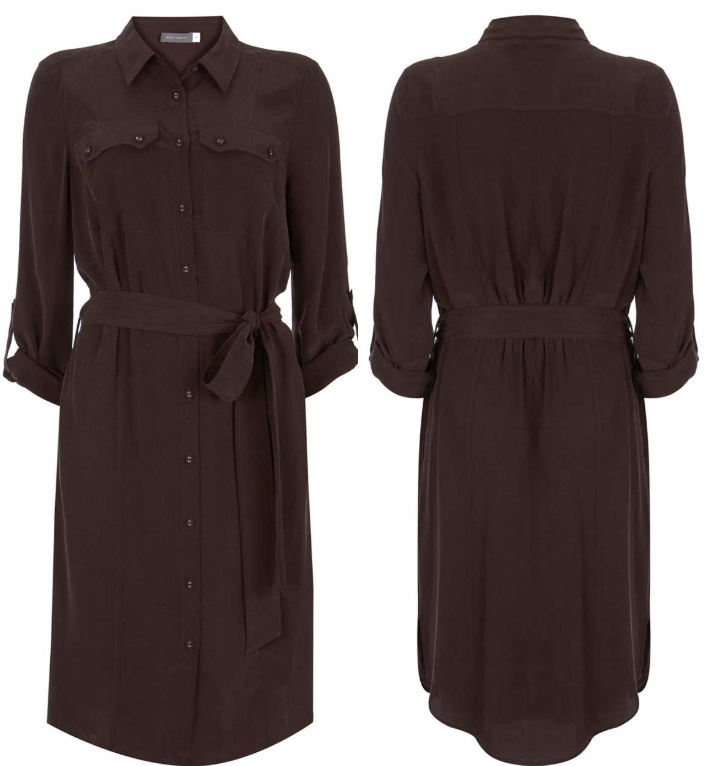 Kate wore her Really Wild Nubuck waistcoat, she's had the piece in her closet for several years. 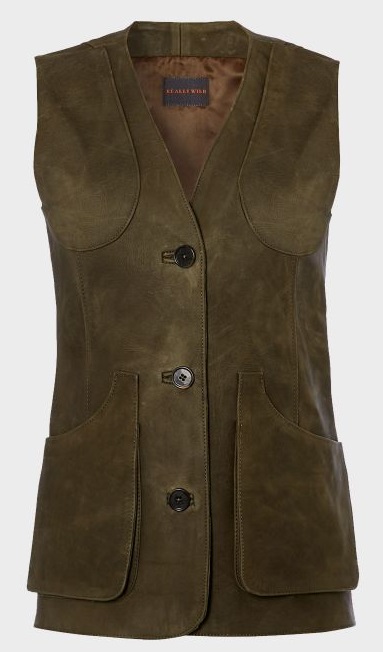 And her Really Wild Seville boots. 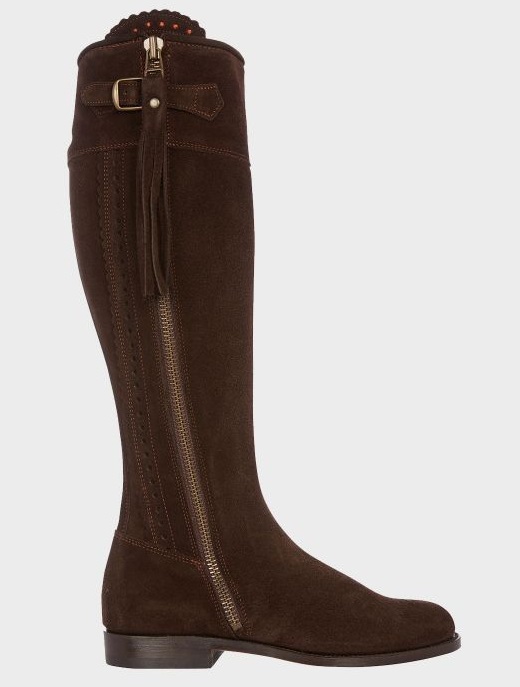 The Duchess accessorised with Missoma Gold Zenyu earrings (with thanks to Emily). They retail for £115. 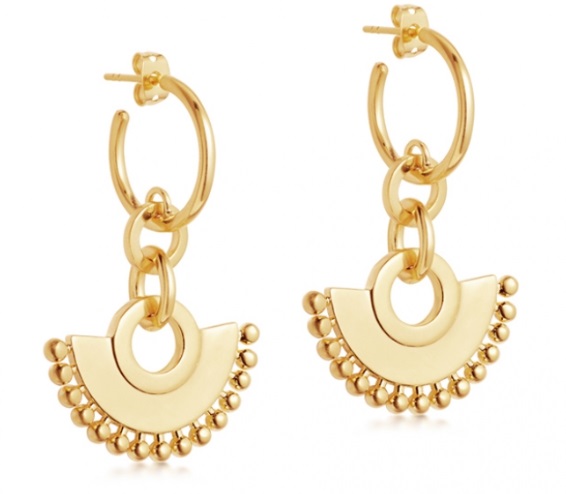 I don't know if William and Kate have an engagement tonight, if not, we'll see the couple in Lahore for a day of appearances tomorrow.
Posted by Admin at 07:05:00