A glittering evening reception at the iconic Pakistan Monument in Islamabad completed the second day of the Duke and Duchess of Cambridge's official visit to the country. 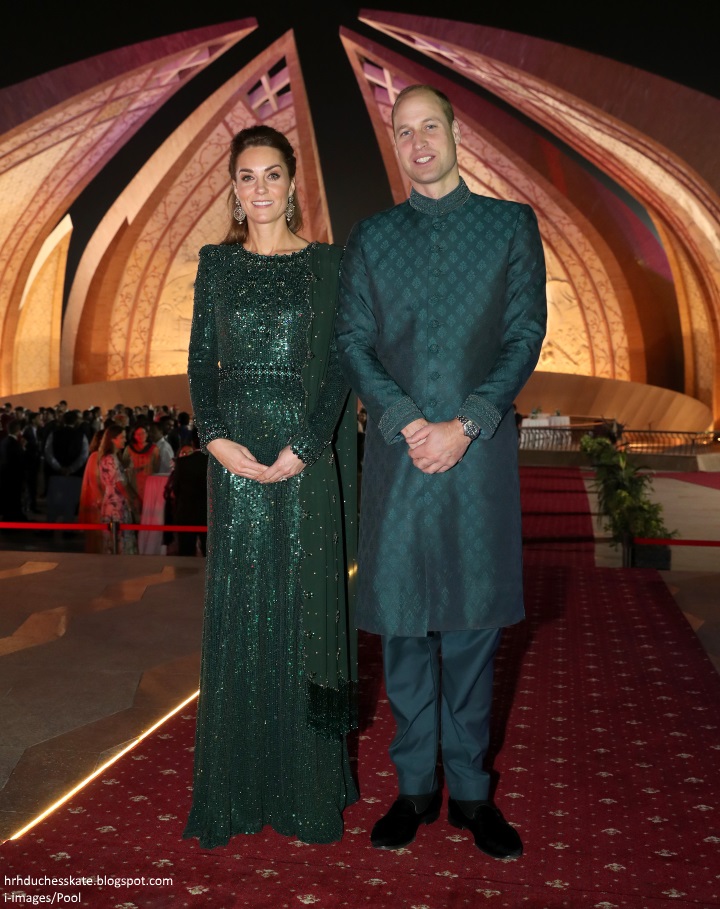 I'm sure many of you were interested to know if the tour would include a black-tie event. When the schedule was released this morning, reporters described the dress code as "glamorous". I knew we could expect sartorial delights for the event and the Duchess Duke didn't disappoint. That's right, William got the memo and surprised us all, stepping out in a traditional sherwani by Naushemian. We've seen an abundance of sartorial diplomacy from Kate; perhaps she suggested William demonstrate a fashionable tribute :) 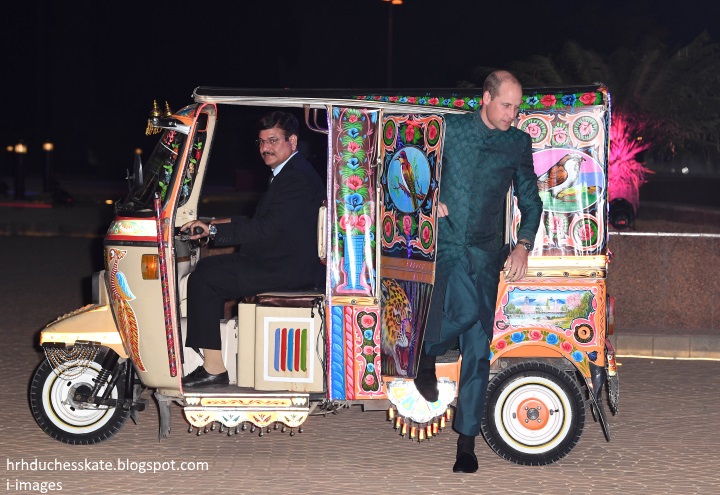 The Duchess didn't scrub up too badly either :) 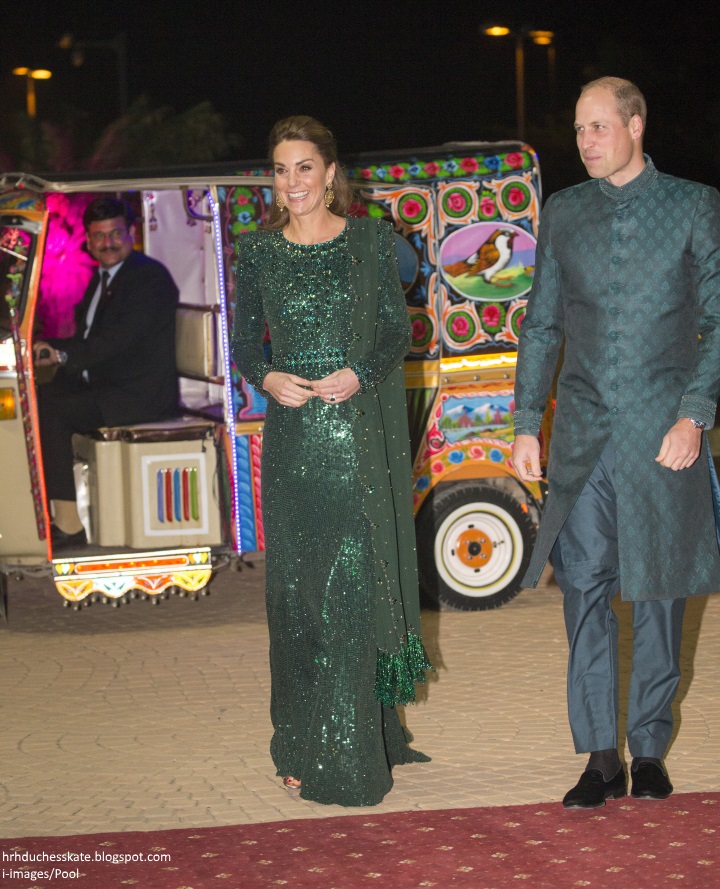 A stylish entrance by the couple as they arrived in a traditional rickshaw.


The day saw the Duke and Duchess visit Model College for girls, where they learned about a programme attracting teachers to tackle the alarming number of girls leaving school. From there, they joined in nature activities at the scenic Magalla Hills. In the afternoon, William and Kate met with President of Pakistan Dr Arif Alvi at the Presidential Palace and joined Prime Minister Imran Khan for lunch. 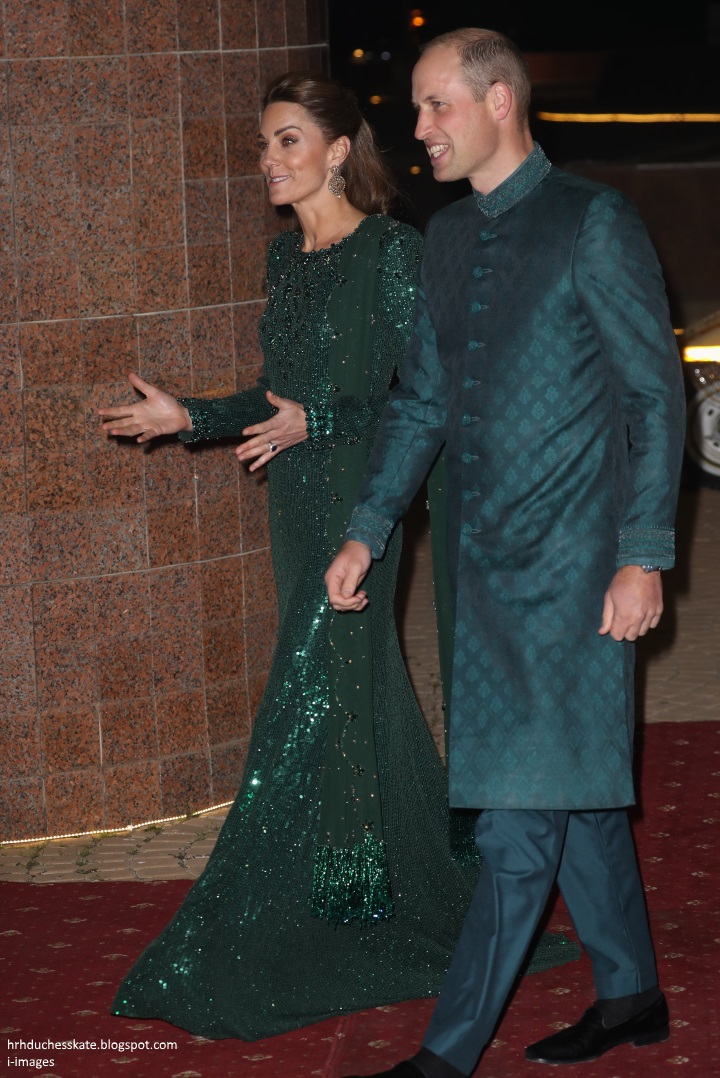 The Pakistan Monument provided a stunning backdrop for the event. Located on the western Shakarparian Hills, it was built to symbolize the unity of Pakistan's people. It's dedicated "to those who sacrificed their today for a better tomorrow". 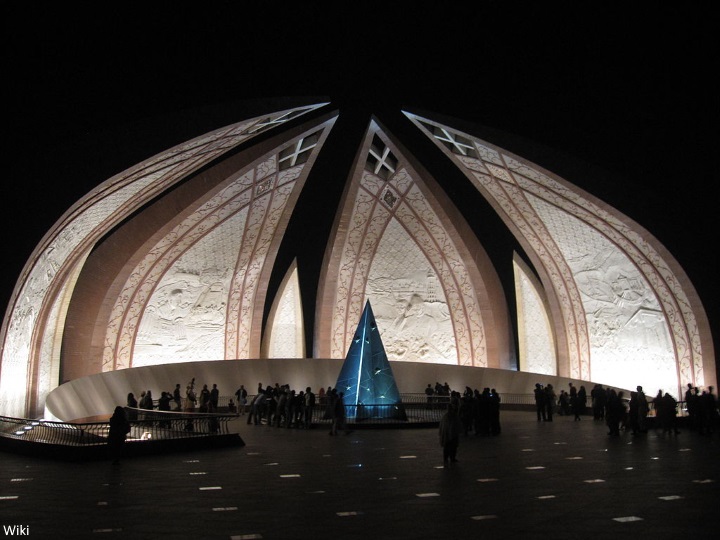 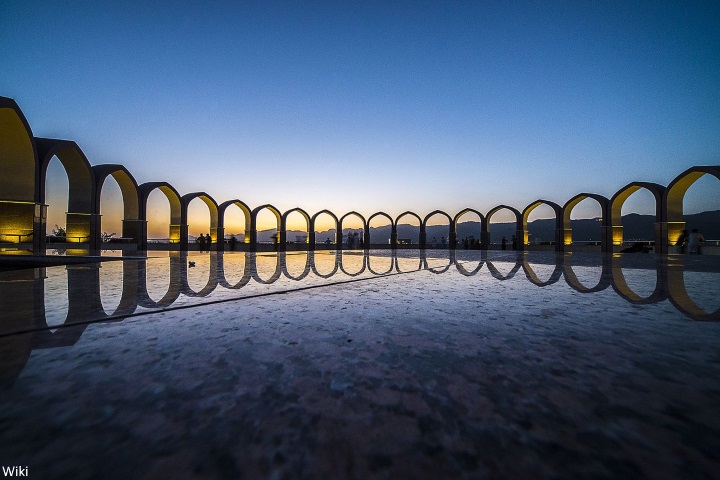 ITV's Lizzie Robinson noted the monument is based on a lotus flower with each petal representing a different province of Pakistan. Below, a closer look at the scene tonight. 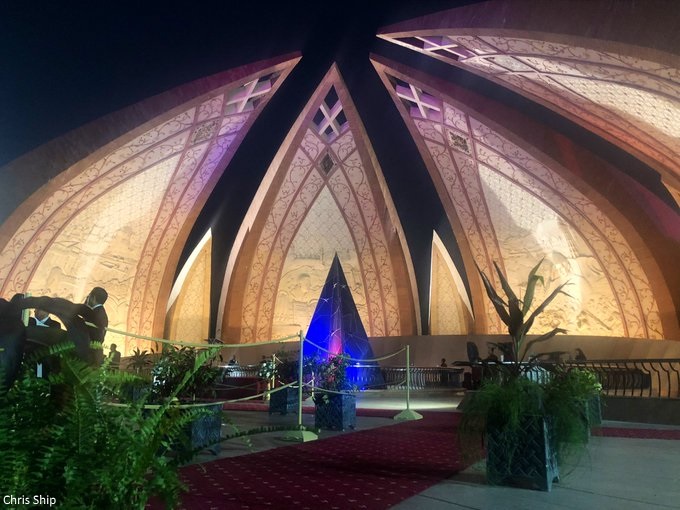 Hosted by the British High Commissioner to Pakistan, Thomas Drew, the event celebrated the UK's links with the country. Guests included well-known faces from arts, music, culture, influential figures and members of government. 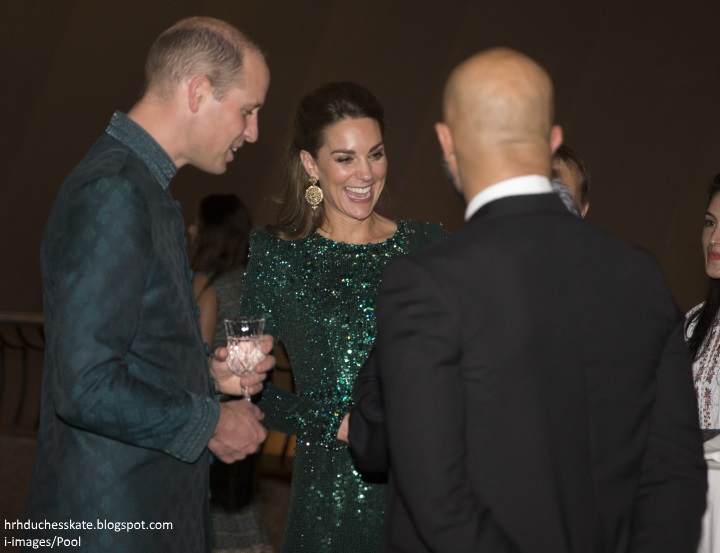 In a detailed speech, William praised the relationship between the United Kingdom and Pakistan: "We share unique bonds and so it will always be in our best interests for Pakistan to succeed. Not least because of the 1.5 million people living in the UK with Pakistani origin and the fact that the UK is one of the biggest investors in Pakistan's economy. You can always rely on the UK to keep playing an important role as a key partner and friend." William also paid tribute to Pakistan's "unbelievably diverse geography that spans deserts to glaciers and everything in between". 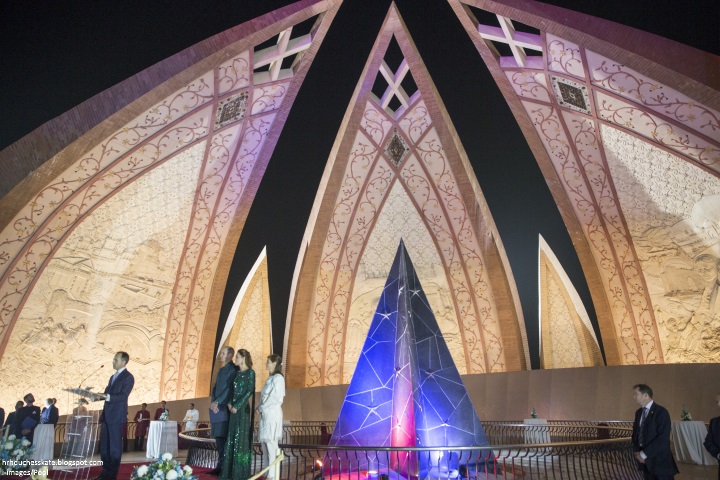 'Ladies and gentlemen, it is our great pleasure to join you here this evening on our first official visit to Pakistan. Already, Catherine and I have been honoured by the hospitality you have shown us, and we have certainly managed to make our way through a record breaking amount of food so generously offered by our hosts.
I would like to begin by saying bahut shukriya to you all for making us so welcome in your country. Stood here with this magnificent monument behind me, I am struck by the great strides Pakistan has made since its birth seventy-two years ago.
The view from this hill would have been quite different when my grandmother, The Queen, first visited over half a century ago. Looking out, one would have seen the beginnings of a city under construction, yet to become the great capital that it is today.

And with successive visits by my mother and my father, this view has continued to change, with the city constantly growing and with it my family's affection for Pakistan.

This is the world's sixth largest country by population. It has an unbelievably diverse geography that spans deserts to glaciers and everything in between. It is the birth place of the youngest ever Nobel peace prize winner. And I am told that it hosts not just the second highest mountain in the world, but also its highest cash machine!

It is also home to one of the youngest populations in the world, with an average age of just 24 – almost half that of the UK.

In a public school not far from where we gather this evening, Catherine and I saw young children learning and playing, aided by an inspiring teacher, trained through the Teach for Pakistan programme. We spoke with ambitious young women finishing their schooling and planning for university and work. As Muhammed Ali Jinnah said, 'No struggle can ever succeed without women participating side by side with men'.

It was good to hear from President Alvi and Prime Minster Khan, earlier today that education will continue to be an important priority for Pakistan. We also saw the brilliant work taking place in the Margalla Hills, where young children were being taught the importance of protecting and caring for the world around them.

The UK and Pakistan share unique bonds and so it will always be in our best interests for you to succeed. Not least because of the 1.5 million people living in the UK with Pakistani origin and the fact that the UK is one of the biggest investors in your economy.

You can rely on us to keep playing an important role as a key partner and your friend. Delivering a future where Pakistan's great potential can be realised will not be easy or without sacrifice. For a country so young, Pakistan has endured many hardships, with countless lives lost to terror and hatred. Tonight I want to pay tribute to all those who have endured such sacrifice and helped to build the country that we see today.

Whether in Pakistan or the UK or elsewhere on our planet, we face shared global challenges. The effects of climate change threaten the present and the future, and therefore demand a concerted effort by everyone.

In Pakistan, your spectacular glaciers – and those of the wider Hindu Kush-Himalaya region – serve as a critical water store for a quarter of a billion people; and over 1.6 billion people rely on the great rivers that flow from the mountains in this part of the world.

Yet, because the effects of global warming at altitude, a one and a half degree Celsius temperature increase overall could mean warming of over two degrees Celsius for northern Pakistan's highest mountains. This could lead to a loss of over a third of these vital glaciers in less than a century, with enormous impacts not only on the availability of water, but on agriculture and hydropower generation.

Tomorrow we will be seeing some of these impacts first hand and meeting some of the communities adjusting to the new realities and new challenges that climate change has brought to their towns and villages. I hope to learn what more we all can do to help prevent and mitigate this impending global catastrophe.

Ladies and gentlemen, given the scale and complexities of the challenges that future generations will face, it is clear that we all need to work together. And whether it's this generation or the next, I know that the UK and Pakistan will continue to exemplify the very best in international cooperation.

Yes, the challenges ahead are great. But we cannot be daunted, nor distracted. Instead we should draw strength from our shared bonds and heed the words of Muhammed Ali Jinnah as we do so, 'My message to you all' he said 'is of hope, courage, and confidence'.


When it comes to the Queen of Evening Wear in Kate's rotation of favoured designers, the crown always goes to Jenny Packham in my opinion. Tonight the British designer outdid herself, creating a sparkling emerald gown with long scarf detail in reference to the traditional Dupatta. It commands attention - literally shimmering in every photo. 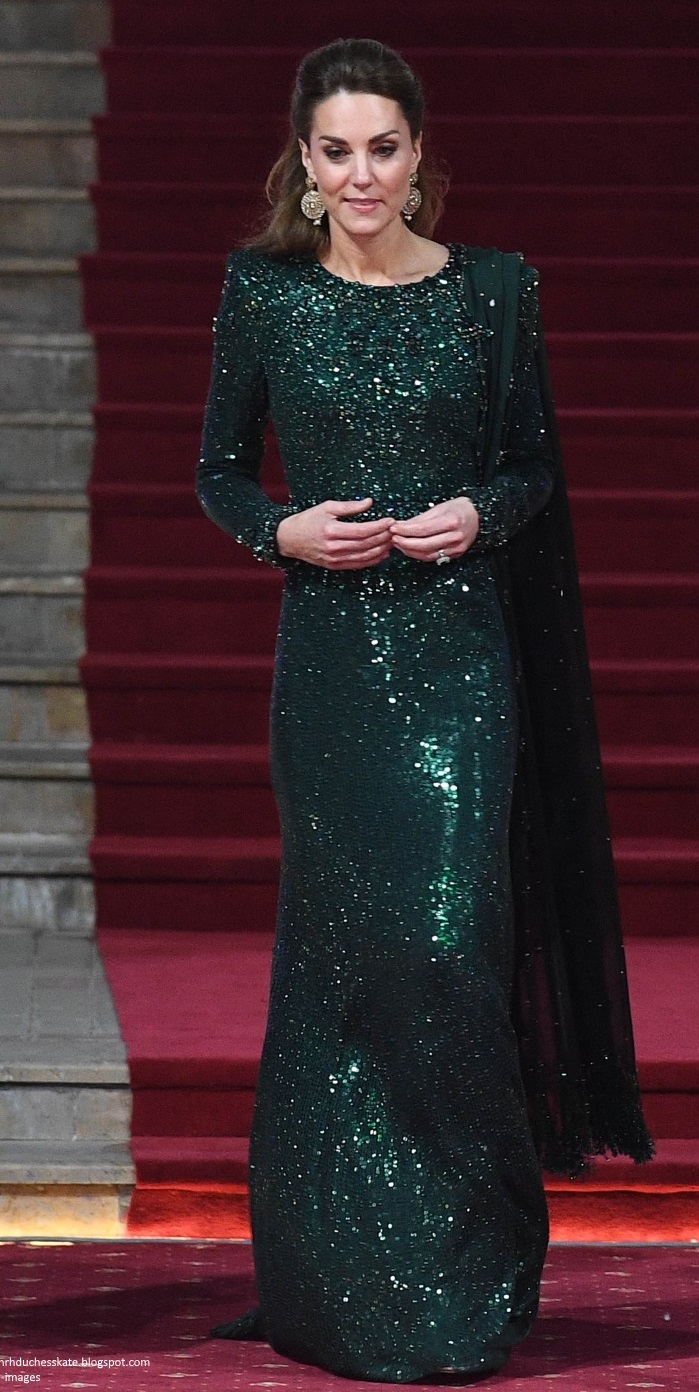 Katie noted the gown appears to be a custom version of the Georgia style. The £3,640 sequin dress is from the Autumn/Winter 2019 Collection and described as: "Fitted with a tailored waistline which is further accentuated with a row of crystals, the utterly feminine design is dripping in head-to-toe sequins, delivering an audacious amount of unapologetic glamour." 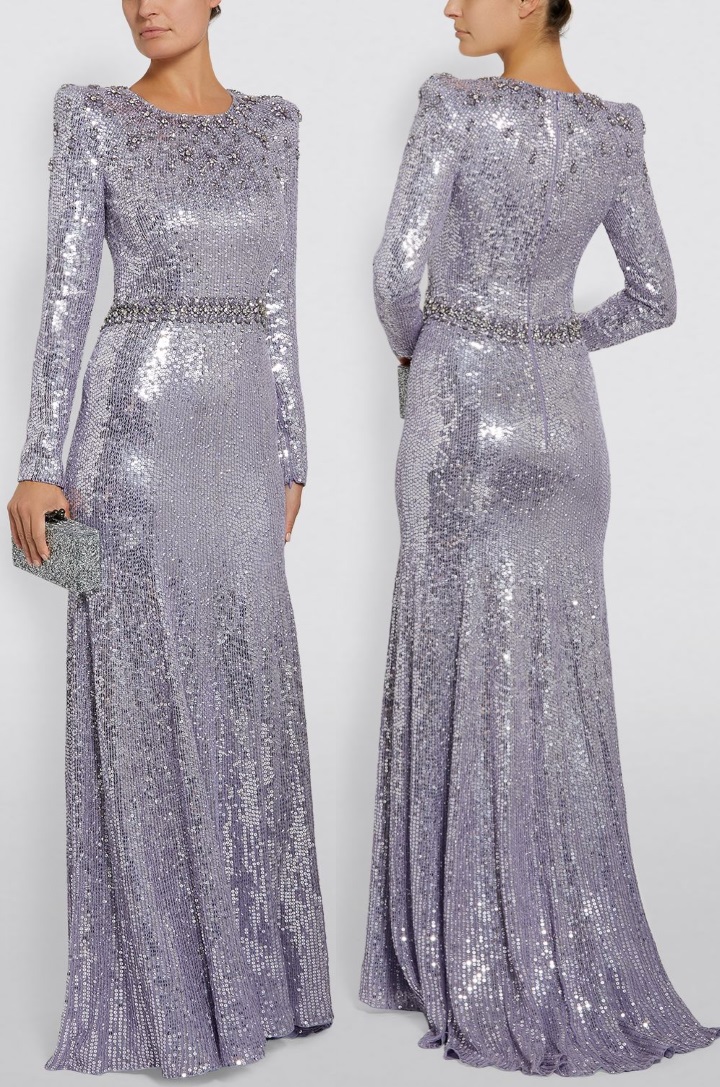 For a red carpet Bollywood gala during the 2016 India tour, Packham created a show-stopping sapphire blue piece with intricate beading. The look remains a tour favourite and I suspect tonight's look will join that category. 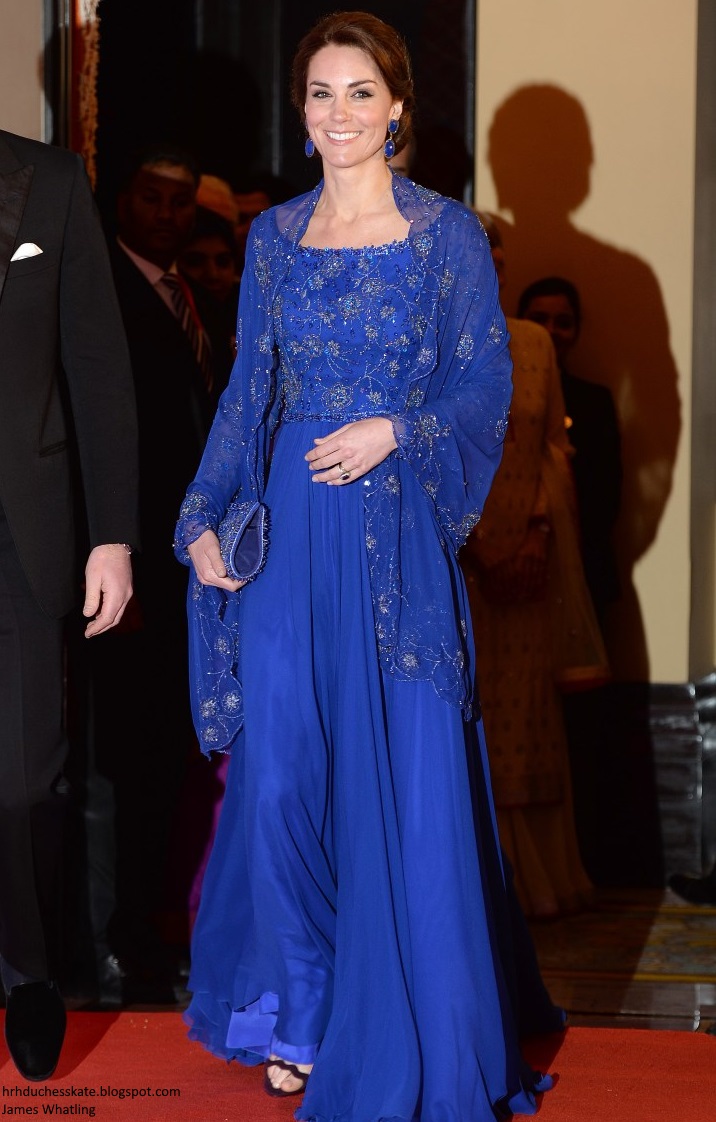 Kate teamed the dress with a pair of Jimmy Choo Mimi Sandals (with thanks to Innominate93). The £575 wrap around shoes are described: "The intertwined ankle strap twists twice around the foot to create the illusion of volume and then meets in a delicate metal buckle fastening." 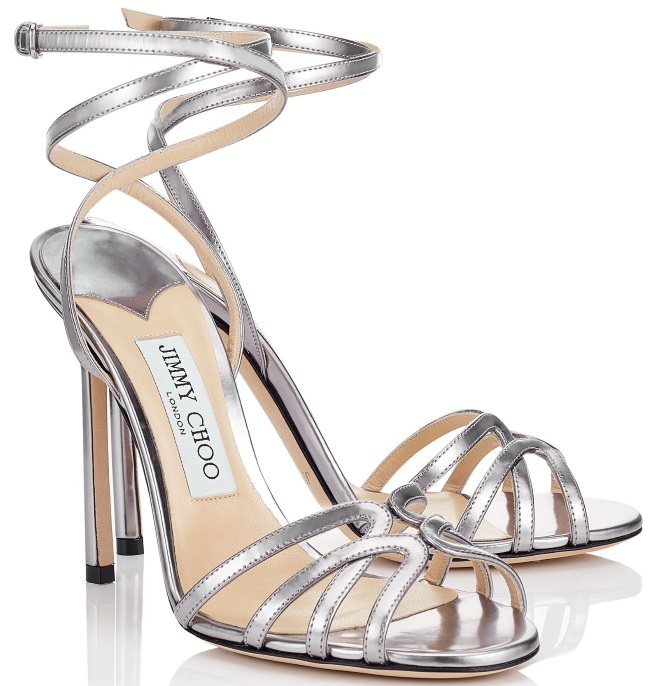 The UFO No More team discovered Kate's statement earrings were custom made in Pakistan by Chelsea-based boutique O'nitaa London. They have been a leading player in the south Asian luxury couture industry for a decade. 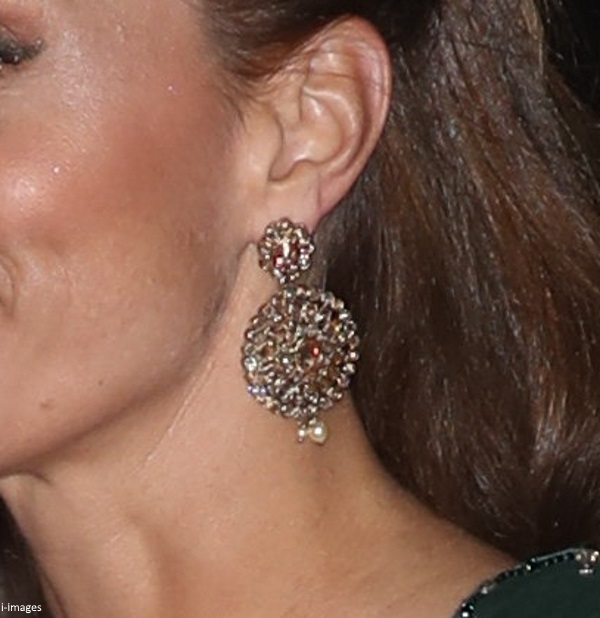 O'nitaa stock Maheen Khan designs and it turns out Kate's team discovered her work through the store. More from Harper's Bazaar:

'Khan also spoke out about being chosen by the duchess. She revealed that the royal's style team first spotted her designs at O'nitaa in London. "They are a very savvy team of young stylists and they picked up some clothes to show them to the Duchess and then, reached out to me,"


Meanwhile, once the reporters returned to their hotel, guests had one fashion moment on their mind...

#PrinceWilliam stole the show tonight in Pakistan with his traditional Sherwani jacket and told guests that Prince Charles often wears one....

“Yes my dad has one too, he wears it around the house at home...” #RoyaltourPakistan 🇵🇰 @GMB pic.twitter.com/cPRBd6sghw
— Nick Dixon (@NickDixonITV) October 15, 2019

If you missed today's engagements in Islamabad, please click here to catch up. 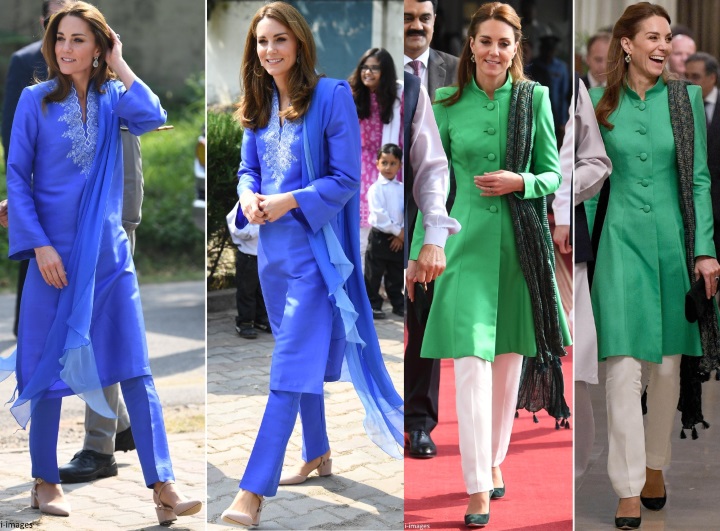 Once again, we won't know William and Kate's itinerary until tomorrow morning, however I understand they are visiting Lahore. What do you think of day two?
Posted by Admin at 15:27:00