The Cambridge Children Explore Kate's 'Back To Nature' Garden!

Following last night's release of new images of the Duchess involved in the finishing touches for her 'Back To Nature' garden, the Palace had another very special surprise in store tonight. As thought, Kate and William took George, Charlotte and Louis to the RHS Chelsea Flower Show which was, in part, inspired by the Cambridge children's childhoods in Norfolk and Kensington Palace. It's the most informal shoot of the family we've seen to date, with a selection of outstanding candid family shots. It's fantastic to see official shots of the Cambridges and their children against the backdrop of one of London's most stunning annual attractions. 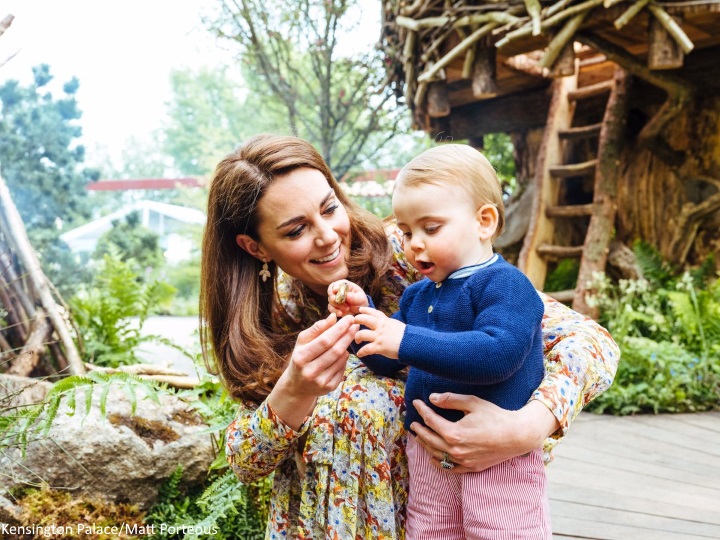 Kate very much wanted 'Back To Nature' to evoke the beauty and wonder of time spent outdoors. She filled it with memories, from her own childhood in Bucklebury, to forget-me-not in memory of Princess Diana; she even included a memory from the Queen (I'm looking forward to finding out which element was inspired from HM). Most of all, the garden is about stressing the importance of outdoor play and the endless benefits it offers for the generation of children currently growing up today - both physically and mentally. It's the latter that's played an integral part of this project for the Duchess, indeed, it's been reported she's been concerned about the vastly increasing amounts of time children are spending in front of screens rather than outside in the fresh air. She read Richard Louv's 2005 book Last Child in the Woods. The author coined the phrase "nature deficit disorder" in the book. 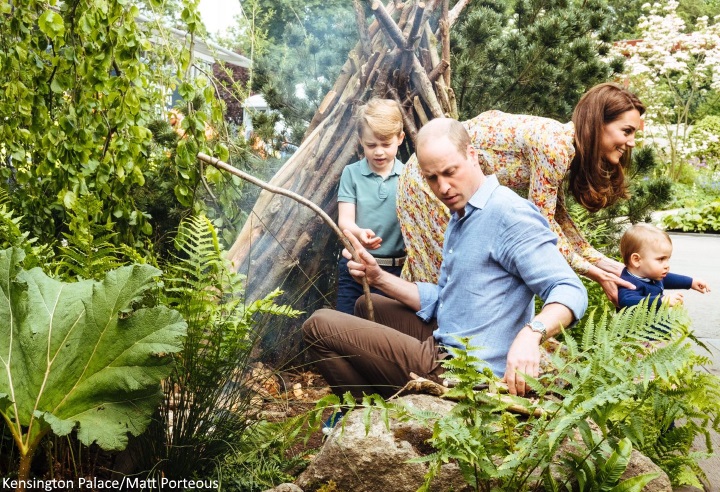 The importance of the message the garden delivers is demonstrated beautifully in these images, taken by Matt Porteous, who has photographed the Cambridge children several times. From exploring the garden, to paddling their feet in the stream, the hope is 'the Kate Effect' will encourage families to spend more time outdoors. The Palace says Back To Nature "seeks to recapture for adults the sense of wonder and magic that they enjoyed as children, in addition to kindling excitement and a passion for nature in future generations". 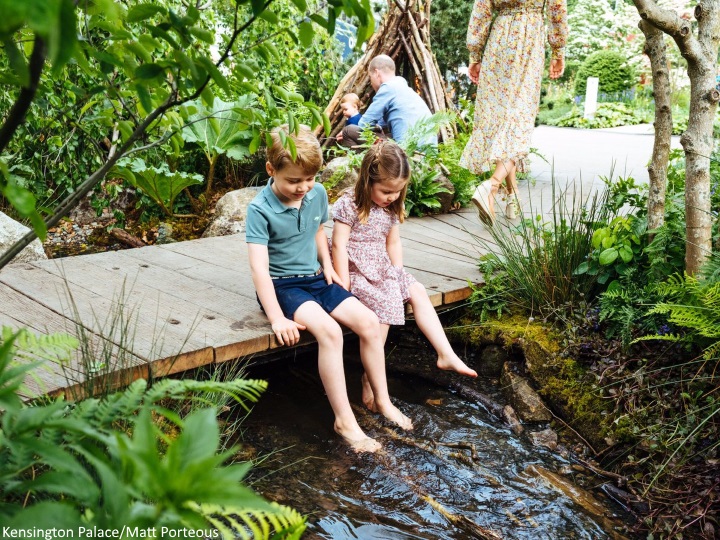 And not one to be left behind, Louis gives it a go - with a little assistance from Dad. 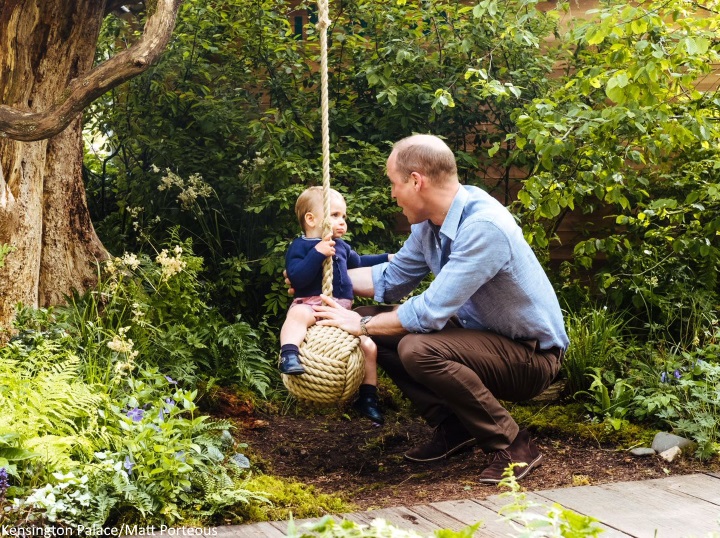 Kate recently revealed Louis is keeping them on their toes; as you can see he's very eager to go and looks like he's ready to run to the camera in this photo. 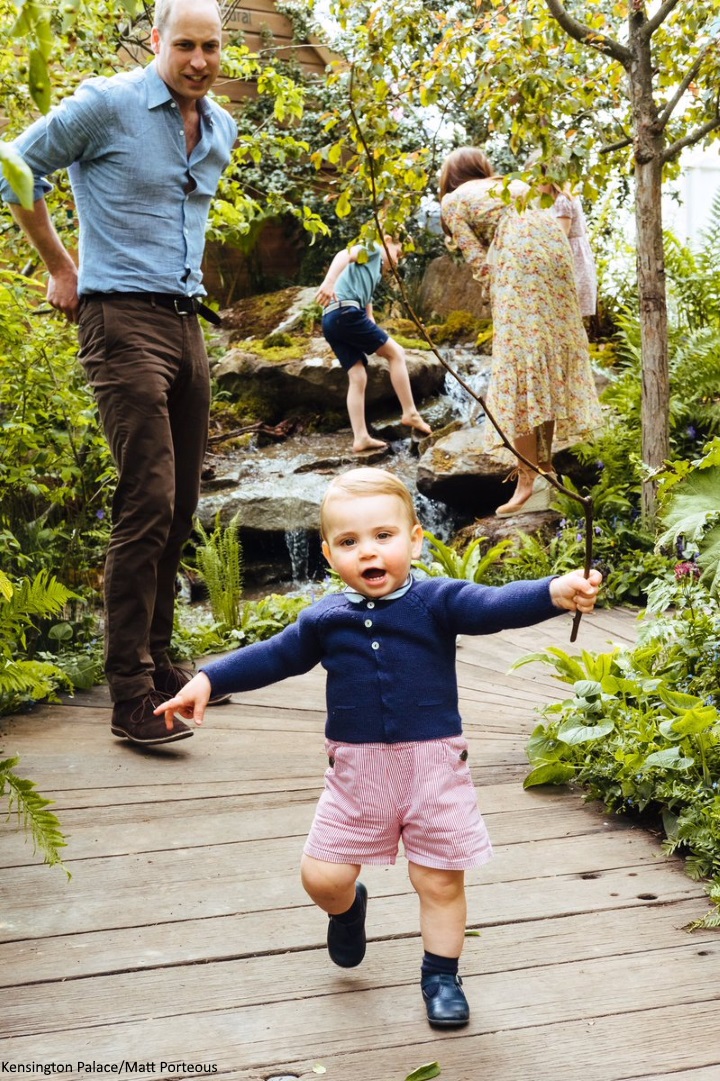 The photo is reminiscent of George's first birthday portrait, taken at the Natural History Museum. 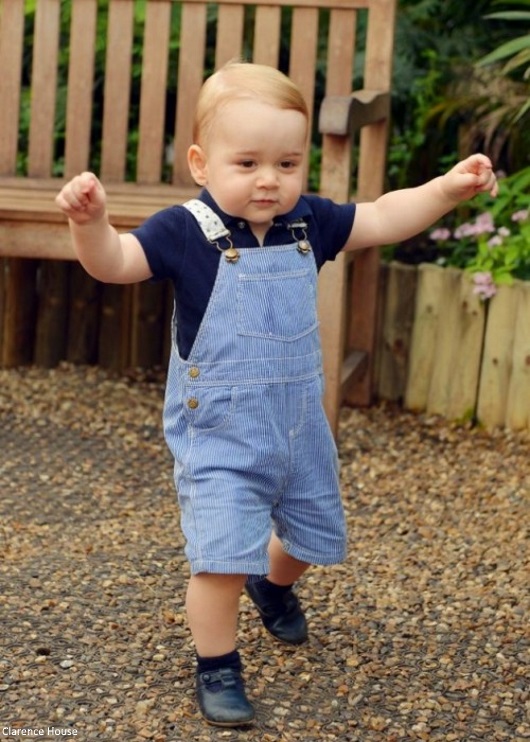 It's possible Louis wore George's red stripe Neck and Neck dungarees. You might remember, the prince wore them for his polo debut on Father's Day 2014. 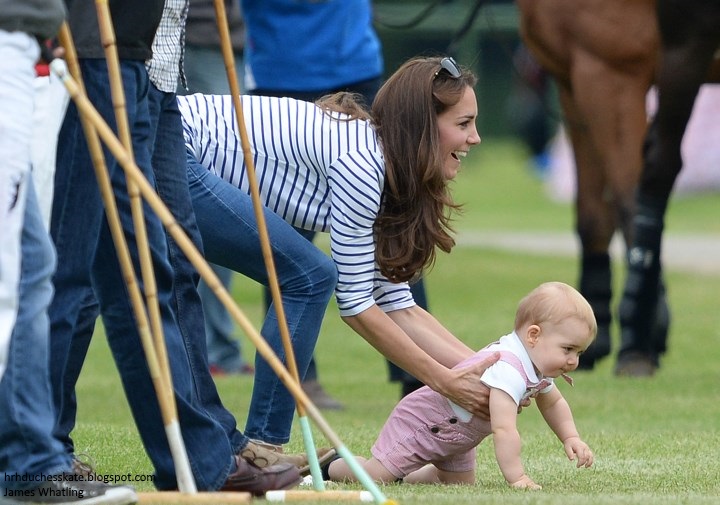 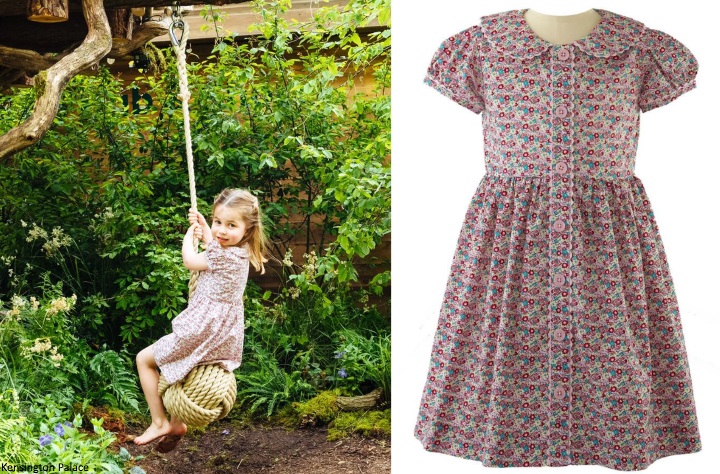 Take a look at this video. It's full of moments featuring the children playing and having fun. At one point, William asks Charlotte if she wants to help George and she replies "No". She also says "Ooh la la" whilst exploring. George is seen climbing rocks and pointing out elements to William (he's such a big boy now). And don't miss Louis making a beeline for the camera :)


It appears the Duchess wore the Floral Ruffled Maxi Dress from & Other Stories (with many thanks to Laura). 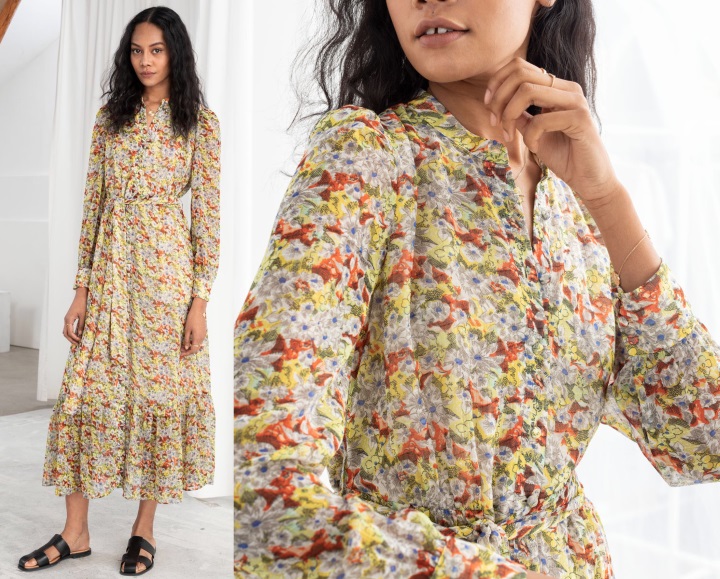 The piece is described as: "Long sleeve button up maxi dress in an allover floral print with a waist tie, puff shoulder and ruffled hem, mandarin collar, slanted front pockets and a three button cuff". 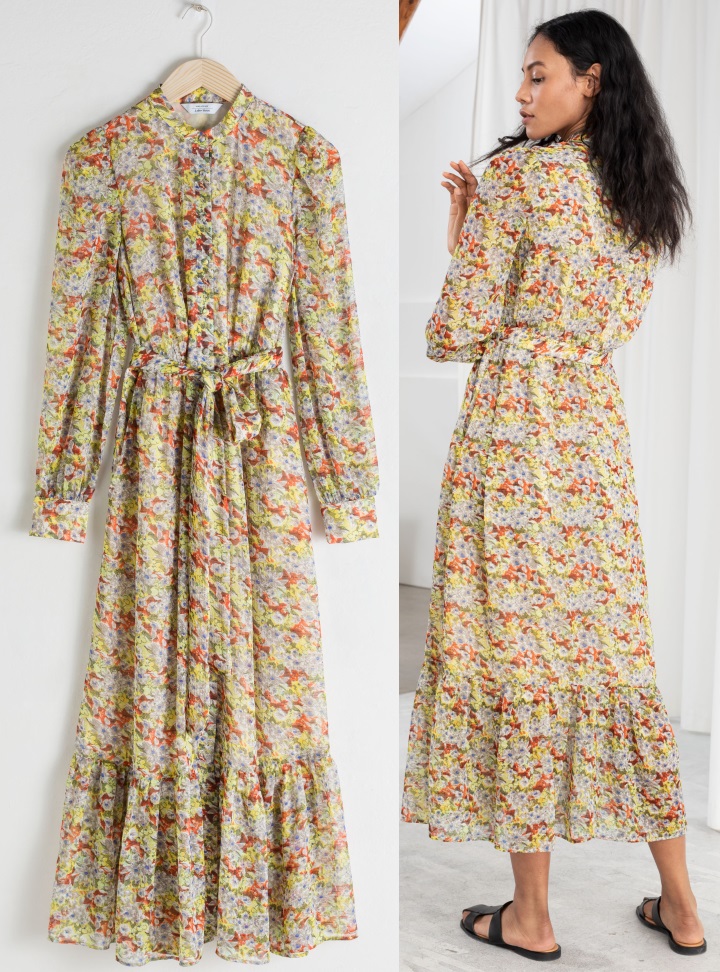 A shorter version of the dress is also available from & Other Stories. 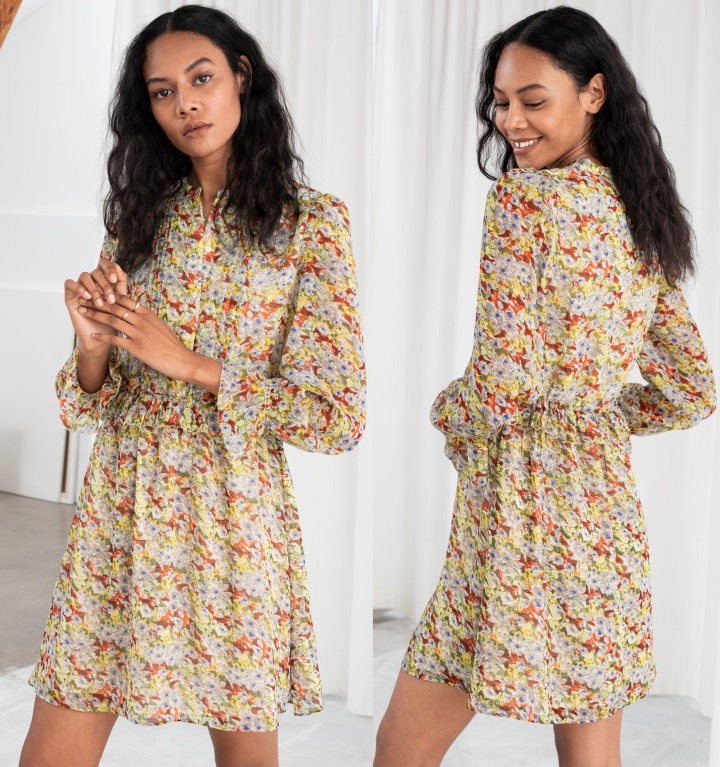 Sophia from Regal RepliKate identified Kate's earrings as the £8 Accessorize Polly Petal Drop earrings. They are available at Accessorize and Next. 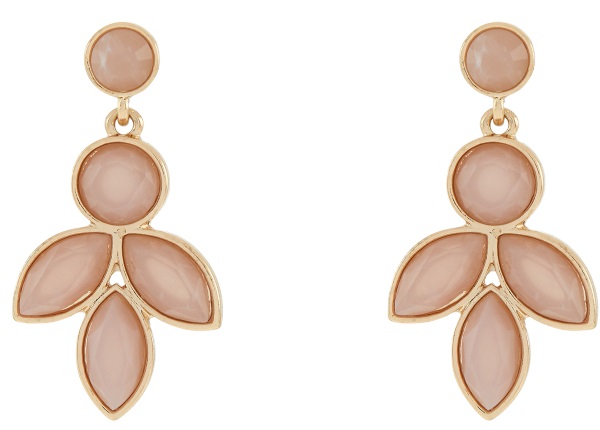 A matching necklace is available for £15. 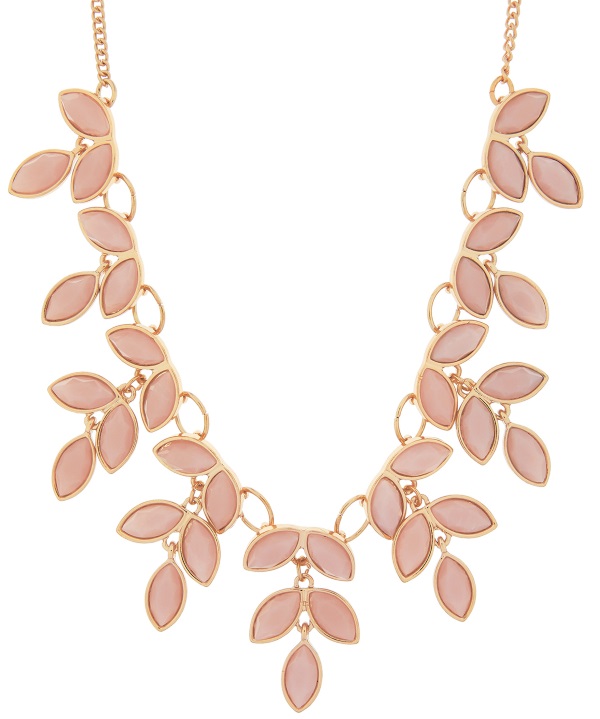 And Kate completed the look with a pair of Castaner Carina wedges (with thanks to Danielle). The Carina style is available in multiple colours at Net-A-Porter. 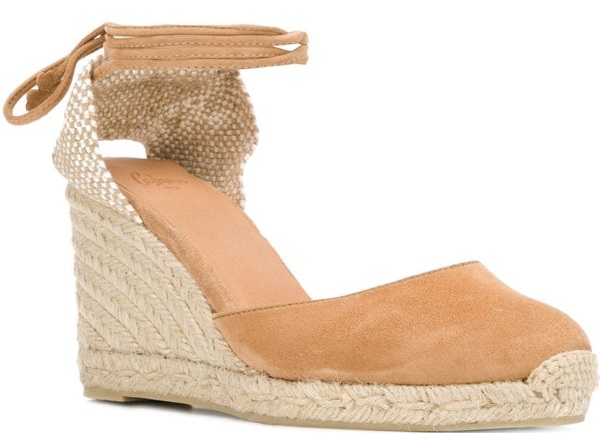 We'll see Kate with members of the Royal family including the Queen tomorrow for the garden's official unveiling. The Duchess will also speak about the creation of the garden on BBC's show from RHS Chelsea Flower Show.
Posted by Admin at 23:02:00