As the Duke and Duchess of Cambridge celebrate their eighth wedding anniversary today, the Queen has bestowed an enormous honour on Kate. The Duchess has been appointed Dame Grand Cross of the Royal Victorian Order for services to the Sovereign. 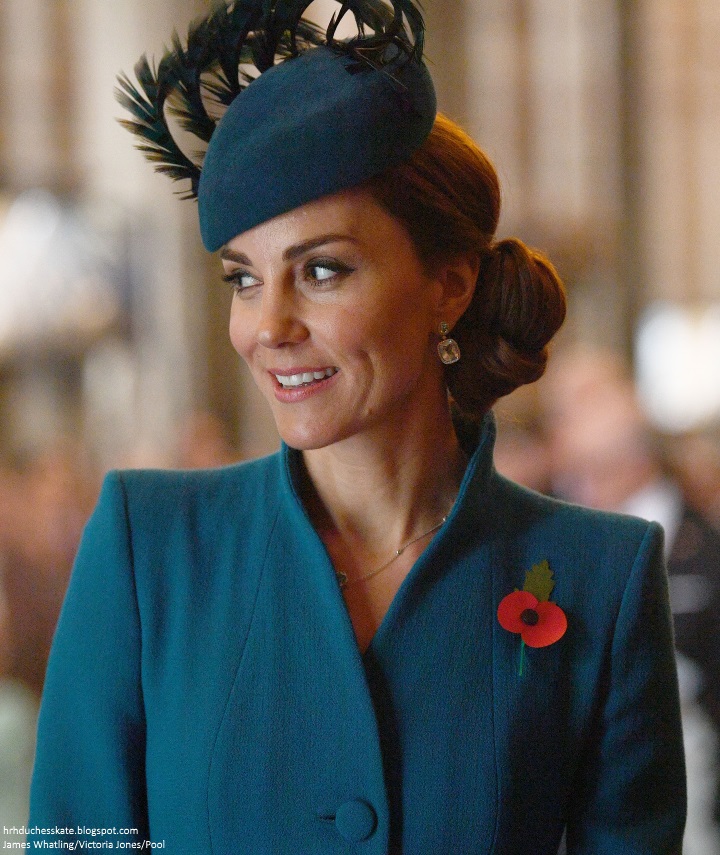 Awards in the Royal Victorian Order are made personally by the Queen. Below, the press release from Buckingham Palace this evening. 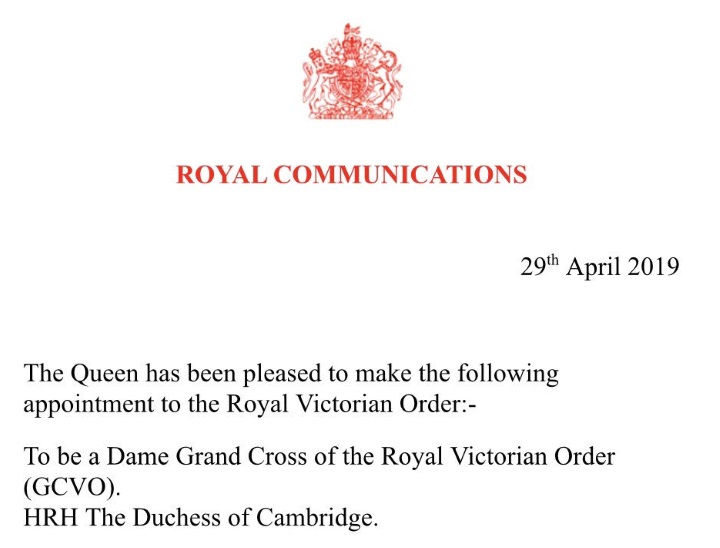 The Royal Victorian Order was established in 1896 by Queen Victoria. It recognised personal service to the monarch. More on the history of the order: "Prior to the close of the 19th century, most general honours within the British Empire were bestowed by the sovereign on the advice of her British ministers, who sometimes forwarded advice from ministers of the Crown in the Dominions and colonies (appointments to the then most senior orders of chivalry, the Most Noble Order of the Garter and the Most Ancient and Most Noble Order of the Thistle, had been made on ministerial advice since the 18th century and were not restored to the personal gift of the sovereign until 1946 and 1947, respectively. Queen Victoria thus established on 21 April 1896 the Royal Victorian Order as a junior and personal order of knighthood that allowed her to bestow directly to an empire-wide community honours for personal services. The organisation was founded a year preceding Victoria's Diamond Jubilee, so as to give the Queen time to complete a list of first inductees. The order's official day was made 20 June of each year, marking the anniversary of Queen Victoria's accession to the throne." 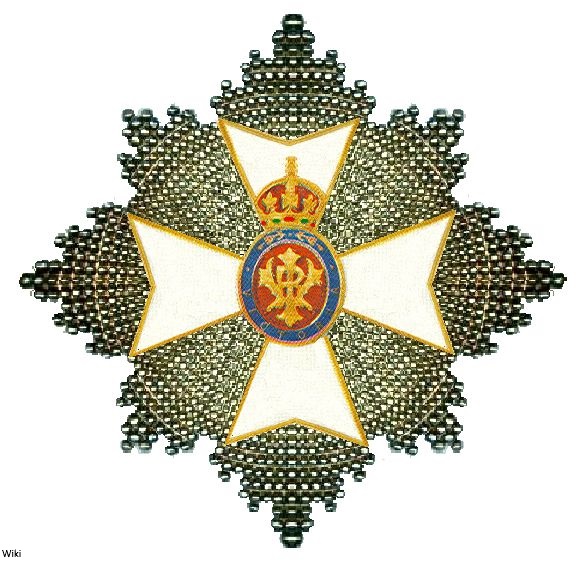 A Knight or a Dame Grand Cross (which Kate received) is the highest rank. The Countess of Wessex and The Duchess of Cornwall received the same honour, in 2010 and 2012 respectively. In 2015, Harry was officially made a Knight Commander of the Royal Victorian Order. The Duke of Edinburgh was only appointed a Knight Grand Cross of the Royal Victorian Order in 2017. Royal historian Marlene Koenig notes Charles and William have not received appointments, because as heirs, they will head the order one day. RVO's are also given to staff members; earlier this year Kate's assistant Natasha Archer was made a member. Below, the grades of the order.

'The reigning monarch is at the apex of the Royal Victorian Order as its Sovereign, followed by the Grand Master; the latter position was created in 1937 and was occupied by Queen Elizabeth (later the Queen Mother) from that date until her death in 2002. Queen Elizabeth II then appointed her daughter, Anne, Princess Royal, to the position in 2007.'

But being a member of the British royal family isn't a requirement. The list also includes British diplomats and others who have served the monarchy in some way, and there are even some honorary members, such as Emperor Akihito of Japan and King Harald V of Norway, to name just two.'


At white-tie functions such as State banquets, we will see Kate wearing a blue sash with red and white trim and the star of the order in recognition of the appointment. Should the Cambridges participate in the upcoming US State visit in June, we'll see it then. 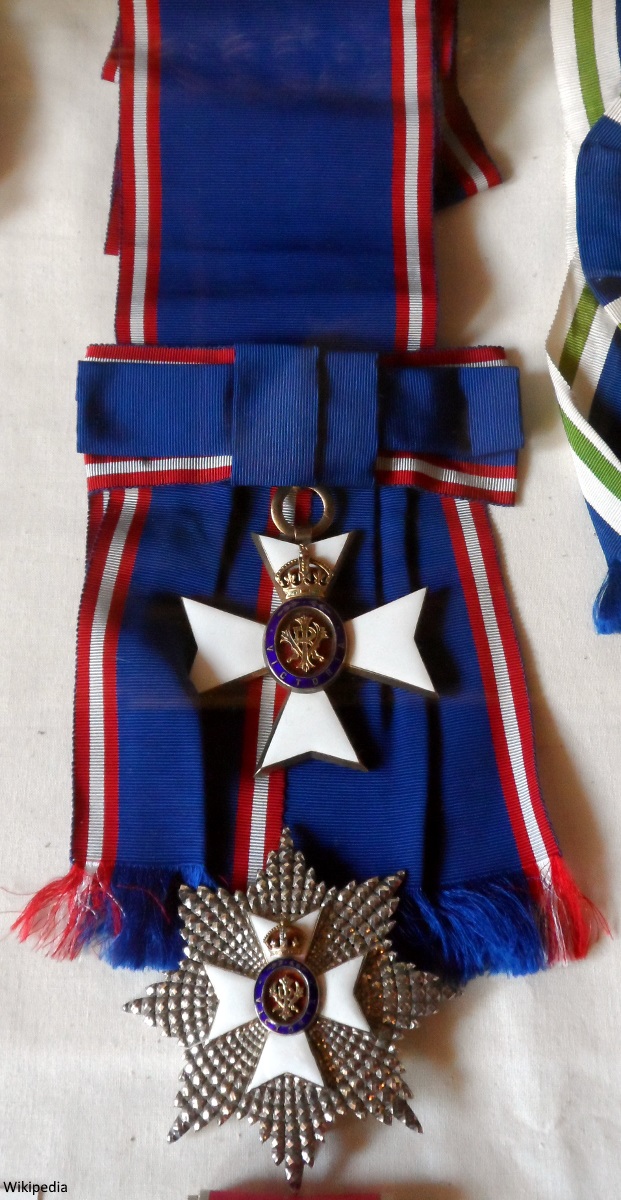 Below, the Duchess of Cornwall wearing the sash and star. 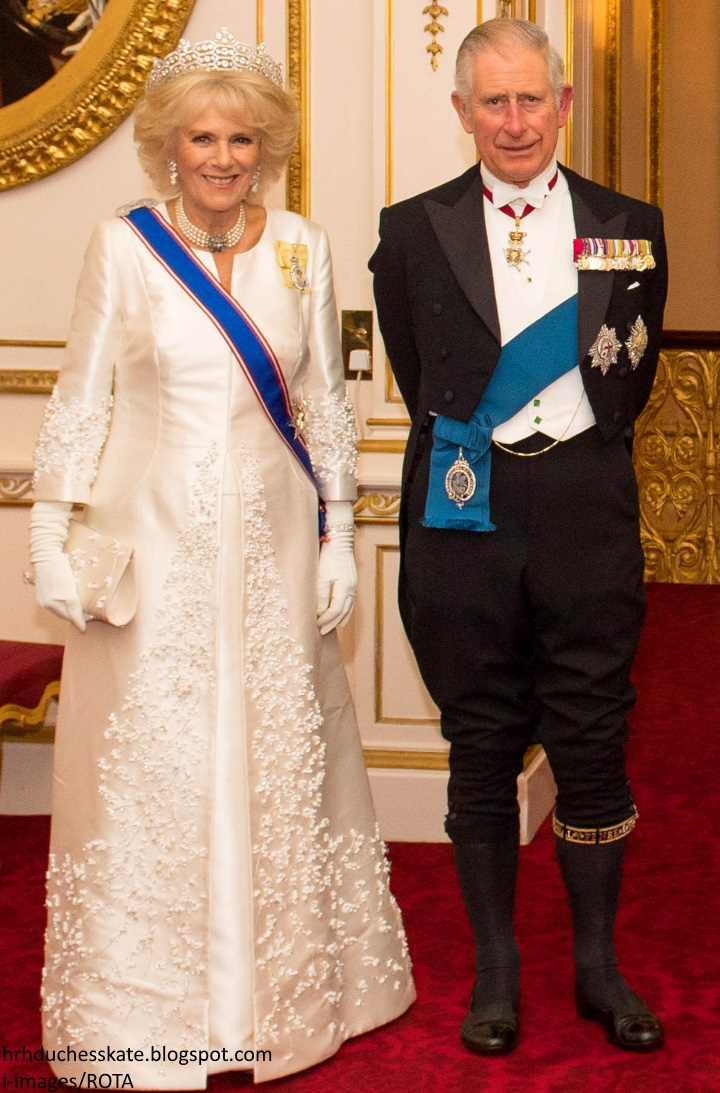 A detailed view of the gold embroidered star. 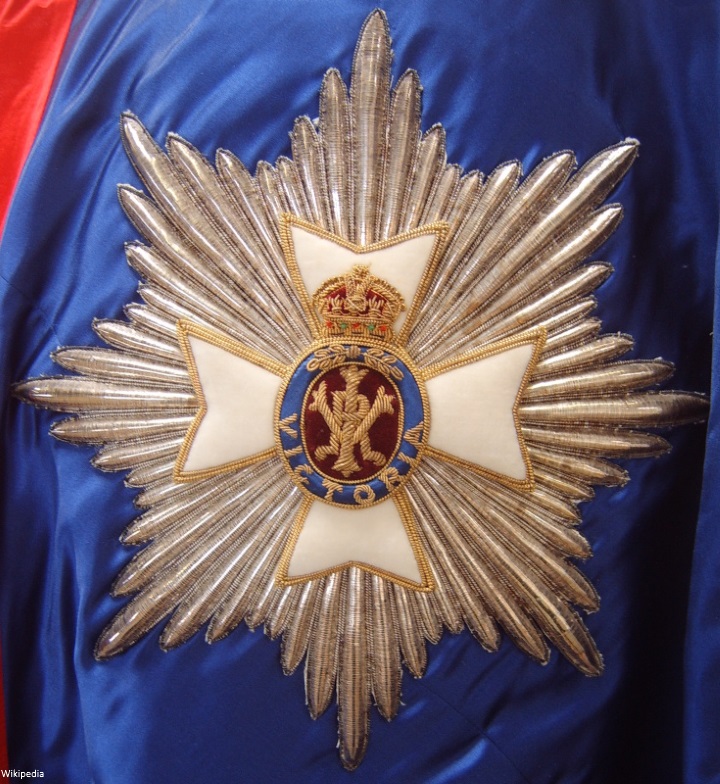 Below, the Countess of Wessex wearing the riband of a Dame Grand Cross of the Royal Victorian Order. 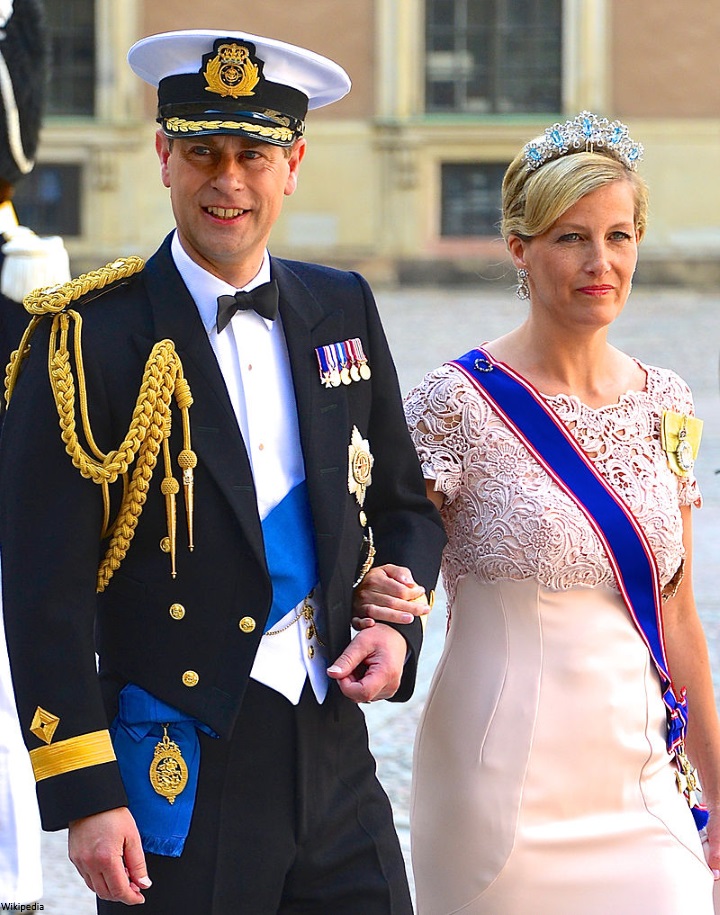 This star from the Order was King George V's. 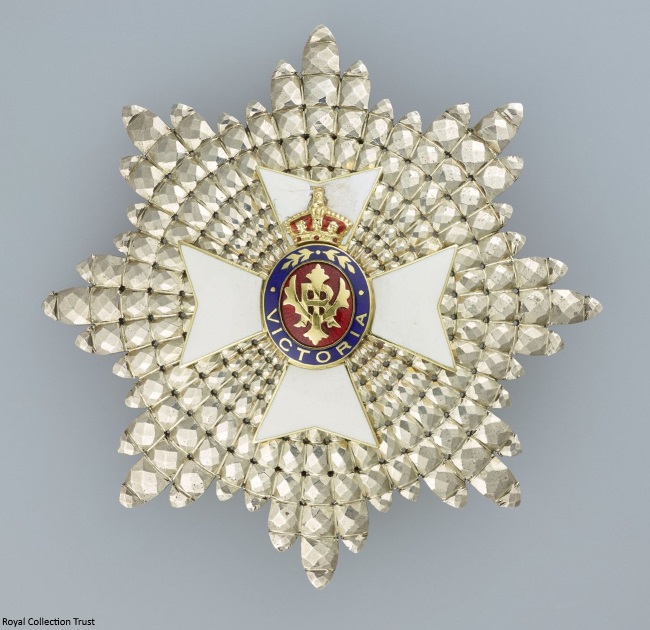 In 2017, Kate received the Royal Family Order from Her Majesty. The Duchess was first photographed wearing at the Dutch State banquet last October. The order is a personal memento rather than a state decoration. 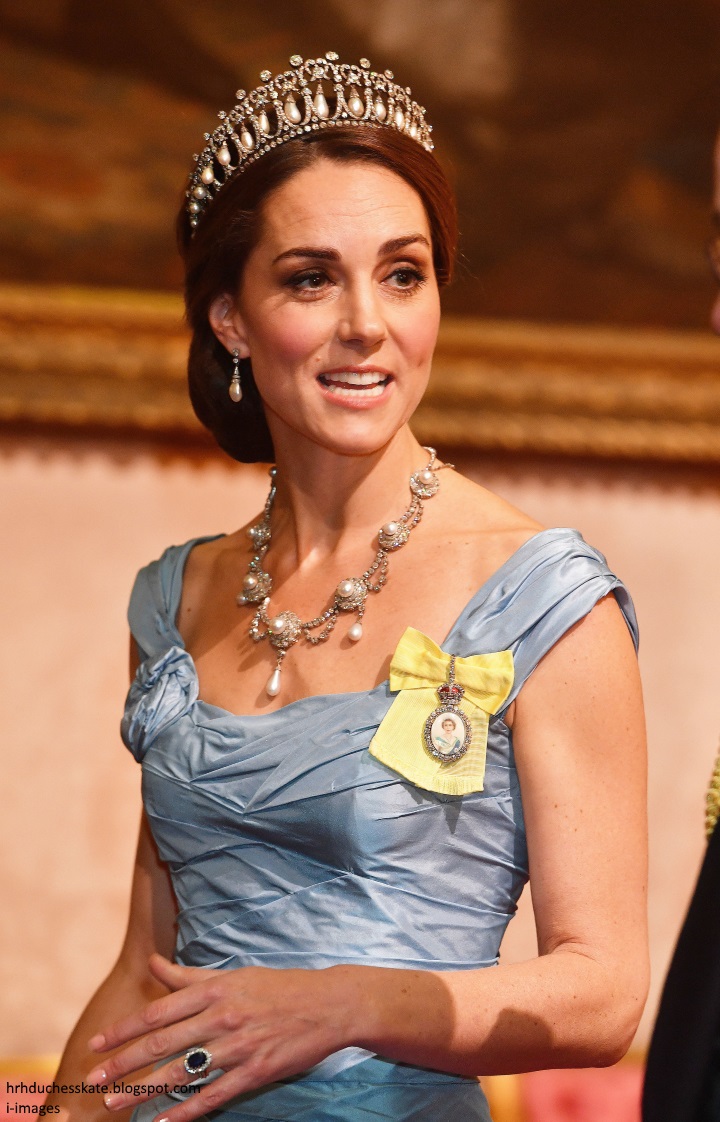 Majesty Magazine's Joe Little notes a service for the Royal Victorian Order will be held on Friday 3, May at St George's Chapel, Windsor Castle. It's very likely we'll see Kate there. The service is held every four years in Windsor because the Chapel of the Order, the Queen's Chapel of the Savoy in London, is too small to house the number in attendance.

A royal source told reporter Rebecca English the Duchess is "honoured". It's a very special gift from Her Majesty.

And on that note, wishing the Cambridges a very happy 8th wedding anniversary! 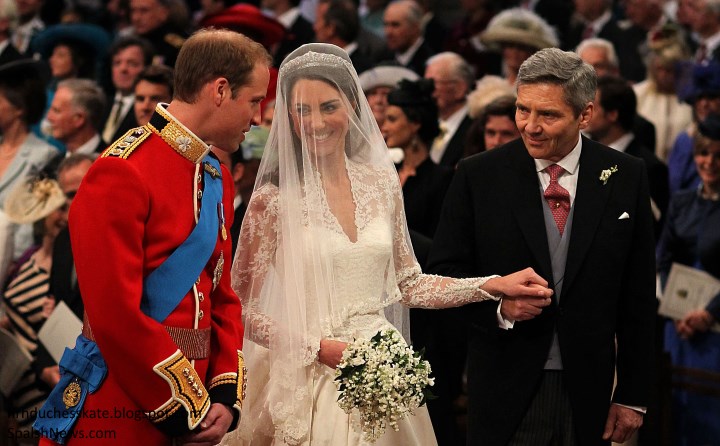 I can still vividly remember the excitement on the day of the wedding and how I thought: "Maybe, I'll start a blog..." :) 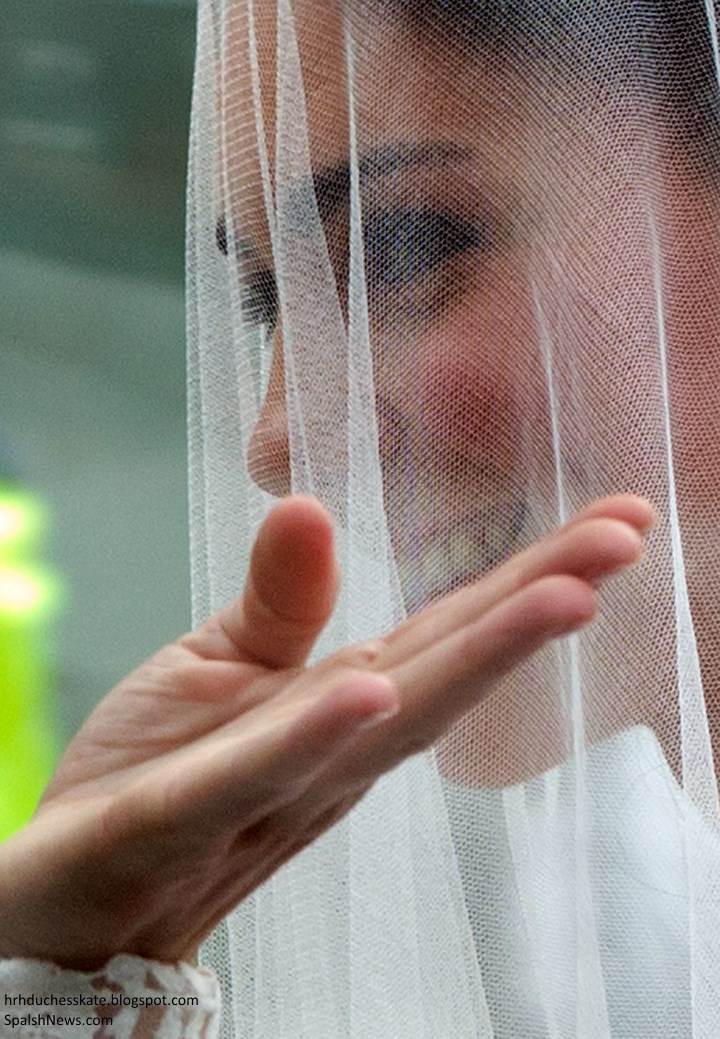 We'll see Kate on Wednesday for her visit to the Anna Freud Centre.
Posted by Admin at 20:04:00

4 February - The Duke and Duchess of Cambridge will travel to the Mumbles and Port Talbot to visit organisations and businesses at the heart of the local communities. The Duke and Duchess will visit Tata Steel in Port Talbot to meet with employees and their families at the UK’s largest steel plant. Their last engagement of the day will be to the Bulldogs Development Centre.