The Duke and Duchess of Cambridge joined the Queen and other royals at Buckingham Palace today for a reception marking the 50th anniversary of the investiture of the Prince of Wales. 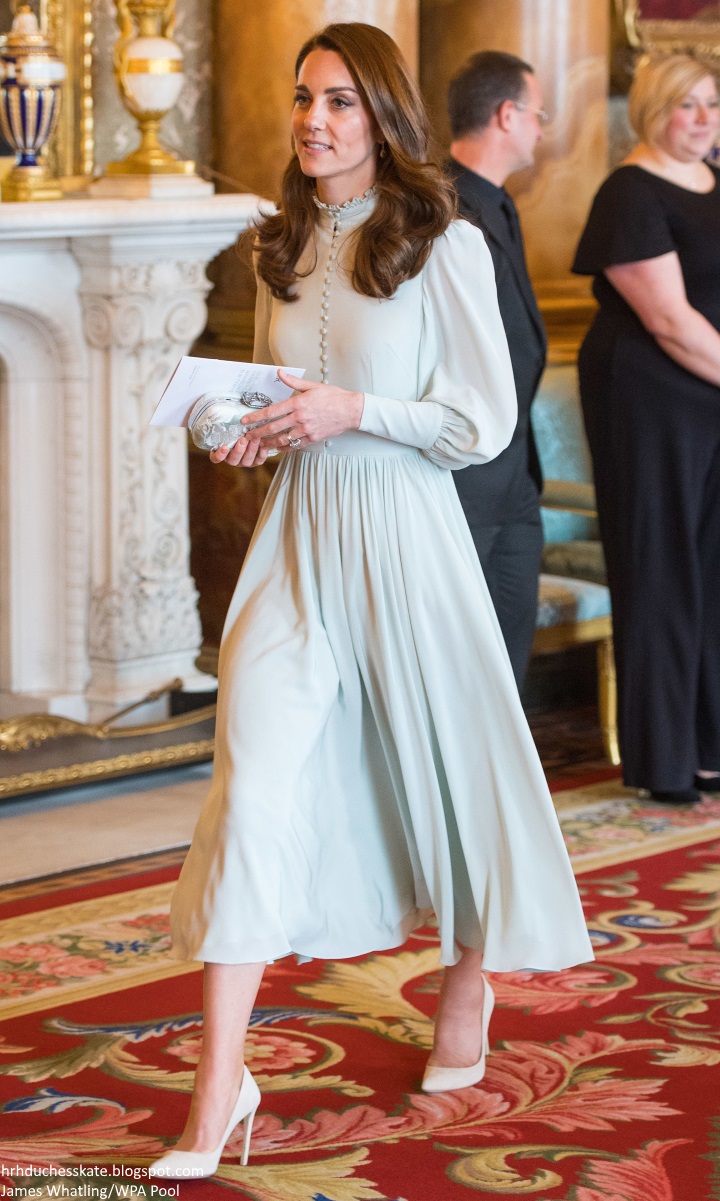 The event marked the perfect occasion to celebrate the milestone with Her Majesty, Camilla, William and Kate, Harry and Meghan and Princess Anne. Princess Margaret's children the Earl of Snowdon and Lady Sarah Chatto were also present. The reception marked Charles' decades of service to the UK and Commonwealth and an an opportunity to celebrate with a range of Welsh charities, organisations and businesses. 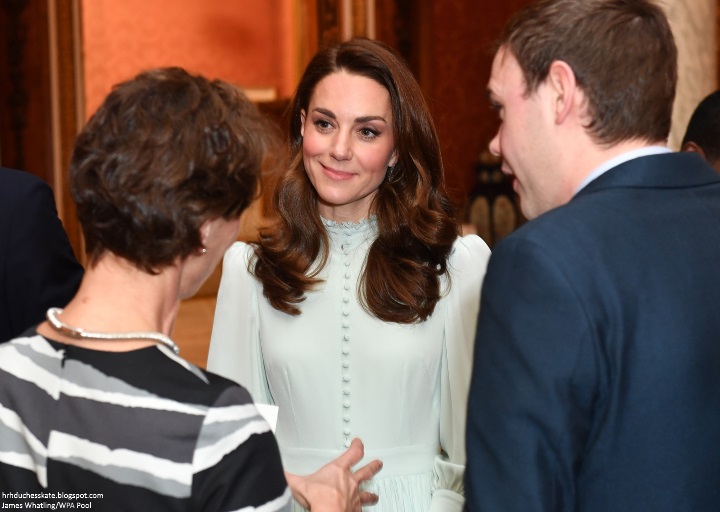 Prince Charles was created Prince of Wales aged 9 on July 26th 1958 and was formally invested with the title by the Queen on July 1st 1969 at Caernarfon Castle. Before the Investiture, Charles spent a term at the University College of Wales at Aberystwyth, learning to speak Welsh. 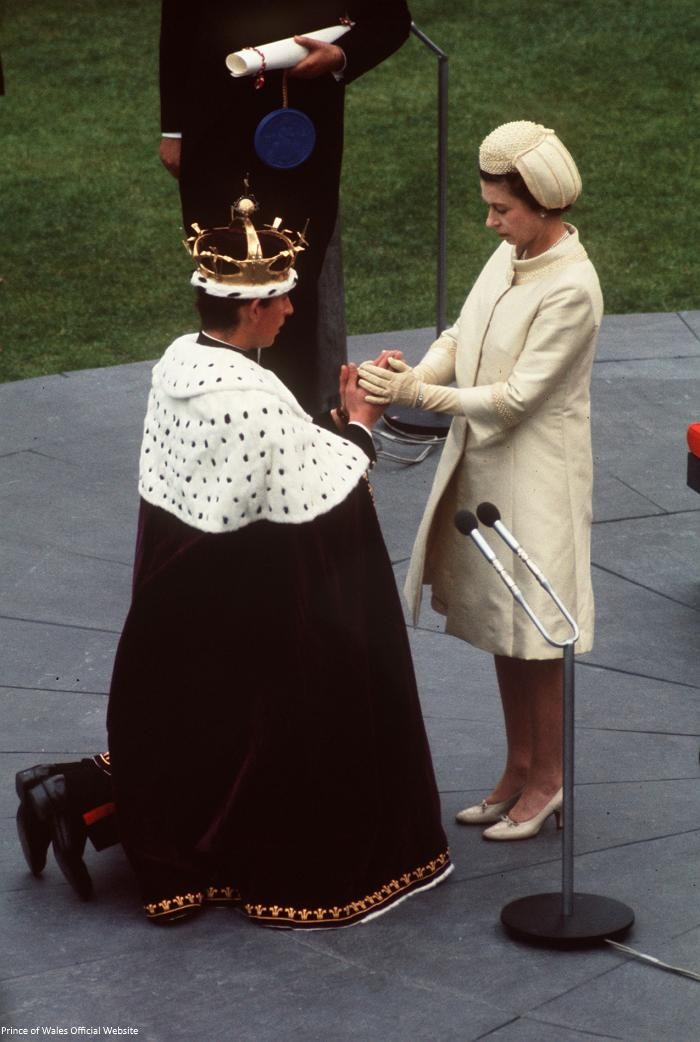 During the Investiture ceremony, after Prince Charles had the coronet and robes placed on him, he pledged his allegiance to The Queen with the words: ‘I, Charles, Prince of Wales do become your liege man of life and limb’. 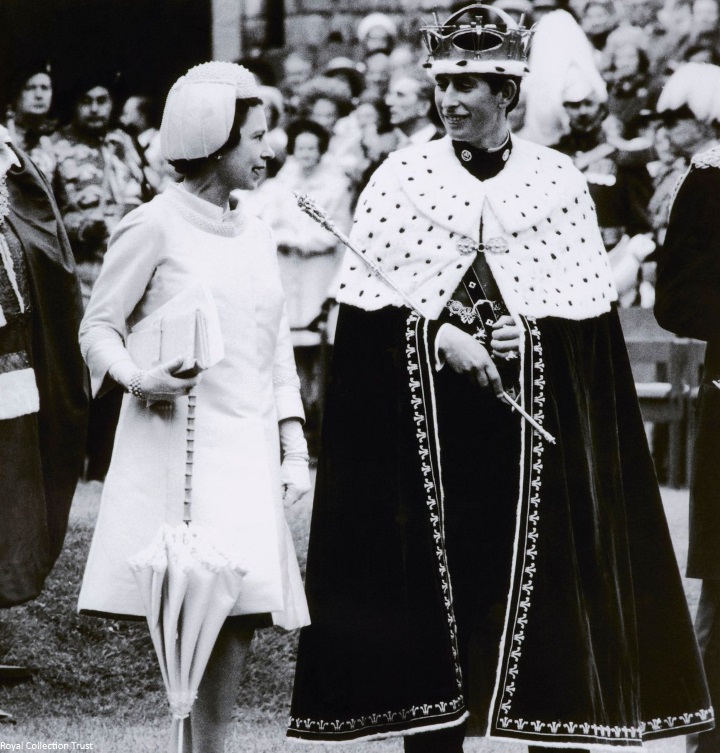 Hannah Furness shared The Daily Telegraph cover from the day of the investiture. 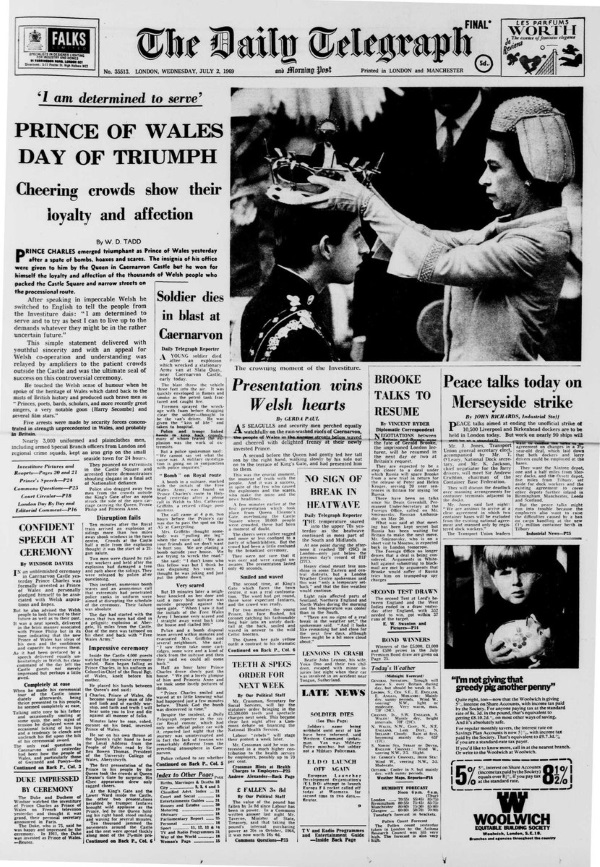 In 2017, Charles became the longest serving Prince of Wales in history. 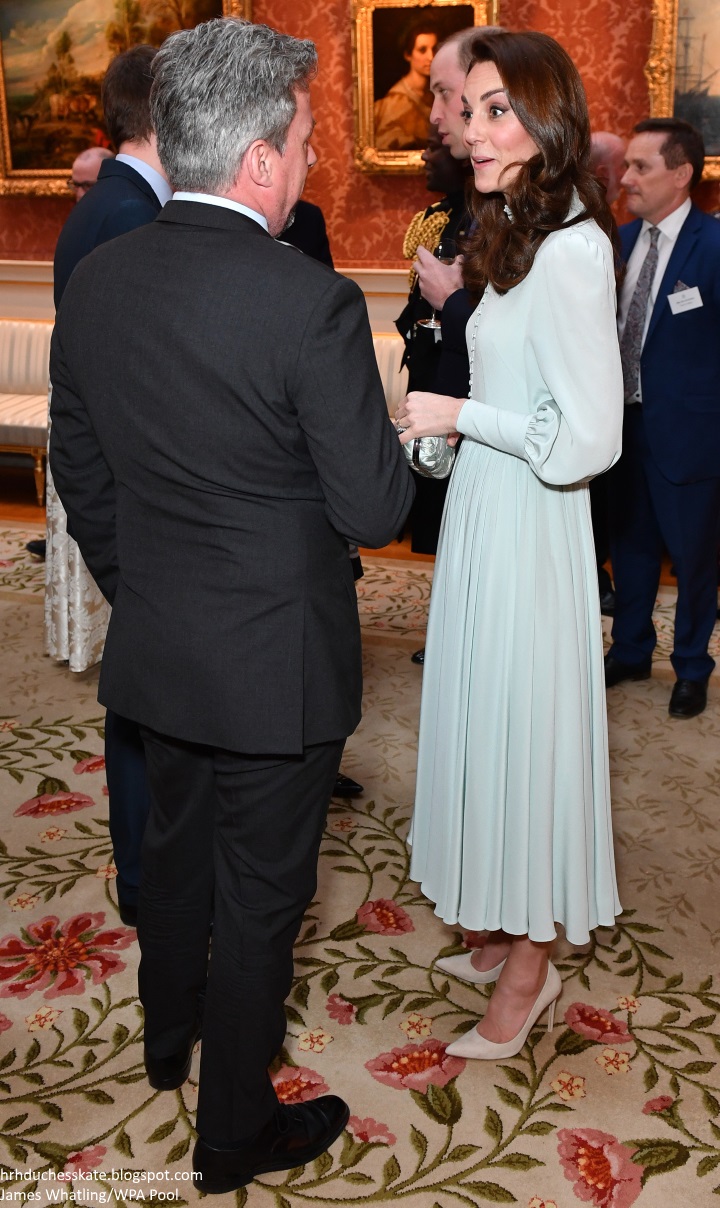 Guests included leading figures in Welsh and UK public life, as well as representatives from the Prince of Wales’s many Welsh charities and patronages, including The Prince’s Trust Cymru, Llangollen International Musical Eisteddfod and the BBC National Orchestra & Chorus of Wales. 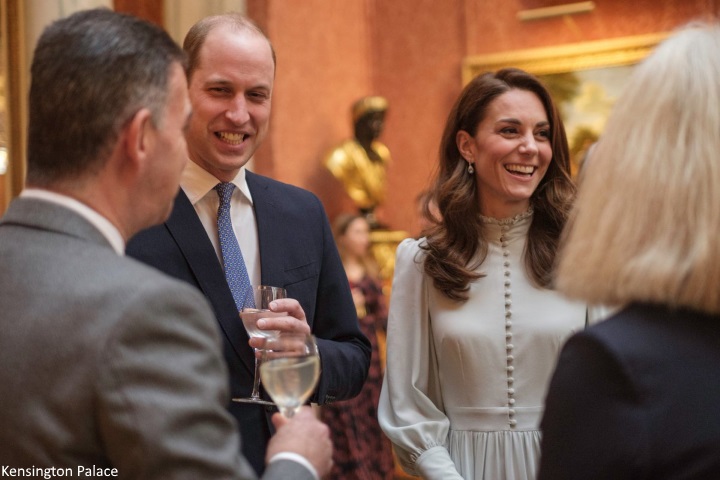 'Apart from the Queen and the prince, there were two other guests who had also been present at Charles’s investiture 50 years ago: Lady Susan Hussey, a lady-in-waiting to the Queen, and Sir Nicholas Soames, the Conservative MP and an old friend of Charles. Recalling the investiture, Sir Nicholas said: “It was an incredibly moving and beautiful day, especially the moment when the Queen presented her son to all four corners [of the land]. The service was absolutely wonderful.”


Prince Charles with members of Stereophonics. 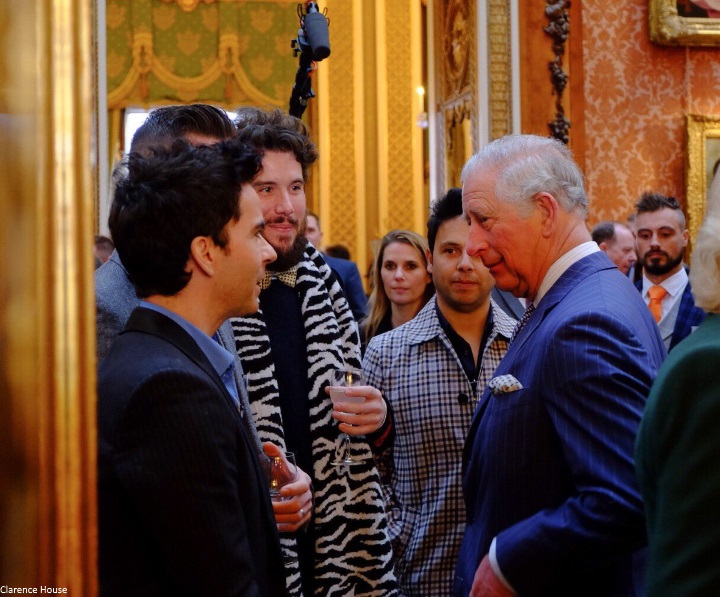 Camilla, wearing a green dress by Bruce Oldfield and the Prince of Wales Feathers brooch, met members of the band. 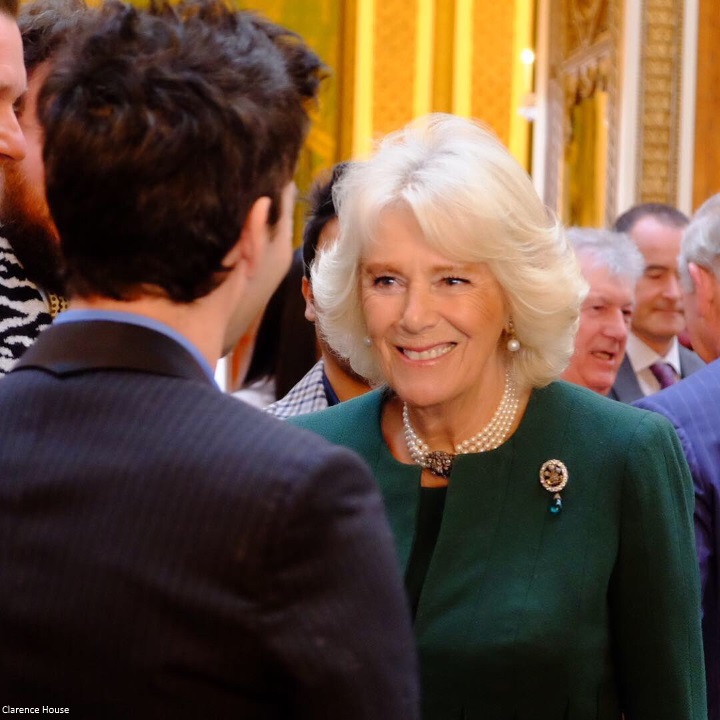 'Guests at the reception included members of the band The Stereophonics, who were supported in their early days by a grant from the Prince’s Trust. Kelly Jones, the singer and lead guitarist, said: “We applied for a couple of grants from the Prince’s Trust. We needed some money for some speakers. Prince Charles came down to Pontypridd, and we met him. We had some funding from them. It was lovely to meet him, and nice to get some speakers.'

“It was the first time we could afford to buy some speakers. My dad was a singer, so I stole a lot of his equipment. I think they gave us one grant for 500 quid and one for 800 quid. At that time it was a lot of money for us.

One member of the band, Adam Zindani, spoke to the Duke of Cambridge, who joked about using the police lights to help him get Prince George to school on time.
He said: “He did mention pressing the blue light on the school run, to speed things up a bit. Sometimes he presses the blue light like Batman and he's there.”
However Kensington Palace said this was a joke by the duke, and had never happened.'

The Duke and Duchess of Sussex meeting guests. 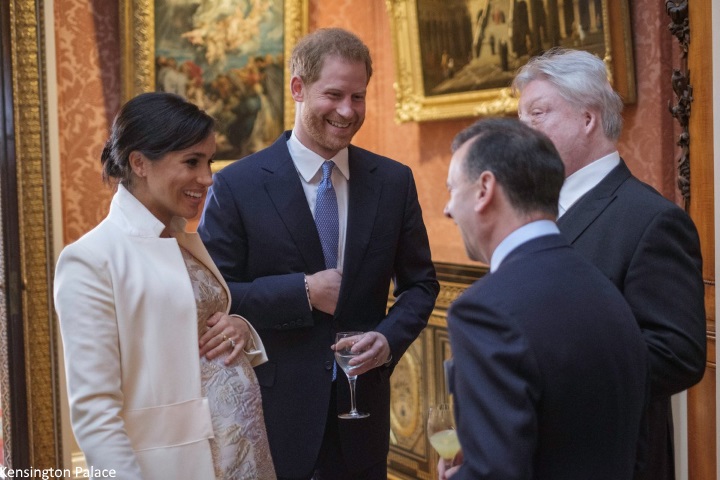 Princess Anne enjoys a joke during the reception. Kate's private secretary Catherine Quinn can be seen in the background. 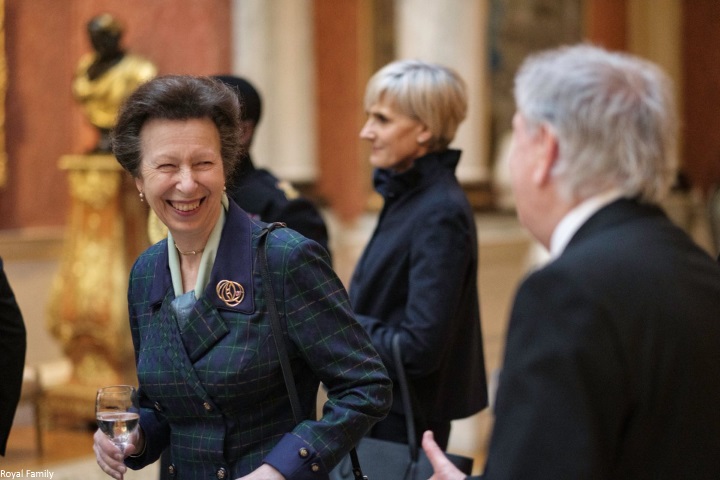 The royals viewed investiture regalia worn by the Prince of Wales in 1969. 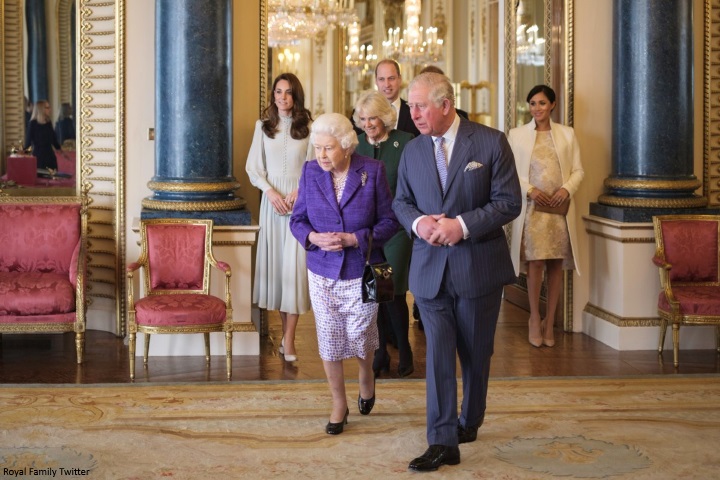 Items included the Investiture Coronet, Sword, Ring and Rod, as well as the Letters Patent for the creation of Charles, Duke of Cornwall as Prince of Wales in 1958. 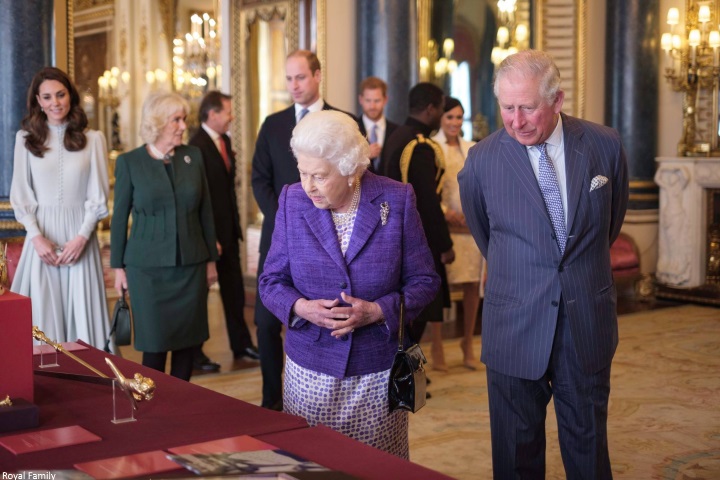 The Investiture Coronet was designed by the architect and goldsmith Louis Osman (1914-1996) and given to The Queen by the Goldsmith’s Company for The Prince of Wales’s Investiture. The Royal Collection Trust shares more information: "It is 24 carat gold, with the 4 Crosses Patées and the 4 fleur-de-Lys made from a nugget of Welsh gold, reinforced with platinum and decorated with diamonds and emeralds. The orb mounted on the top of the arch was engraved by Malcolm Appleby with The Prince of Wales’s insignia. This is surrounded by 13 diamonds arranged as the constellation of Scorpio, The Prince of Wales’s star sign. The diamonds set horizontally represent the 7 Gifts of God on one side and the 7 deadly sins on the other." 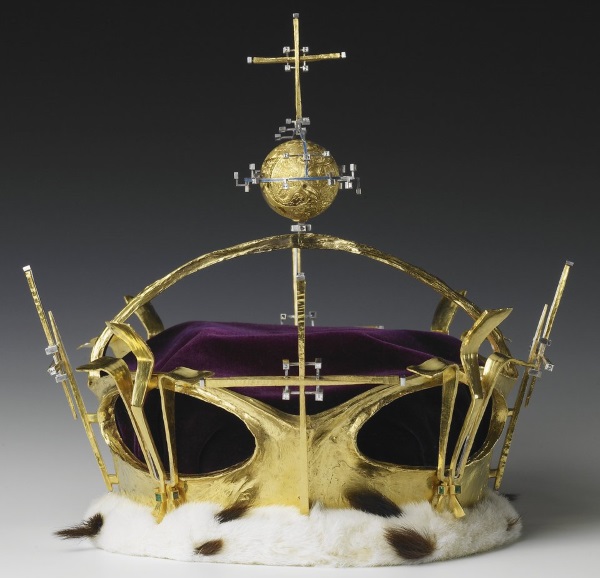 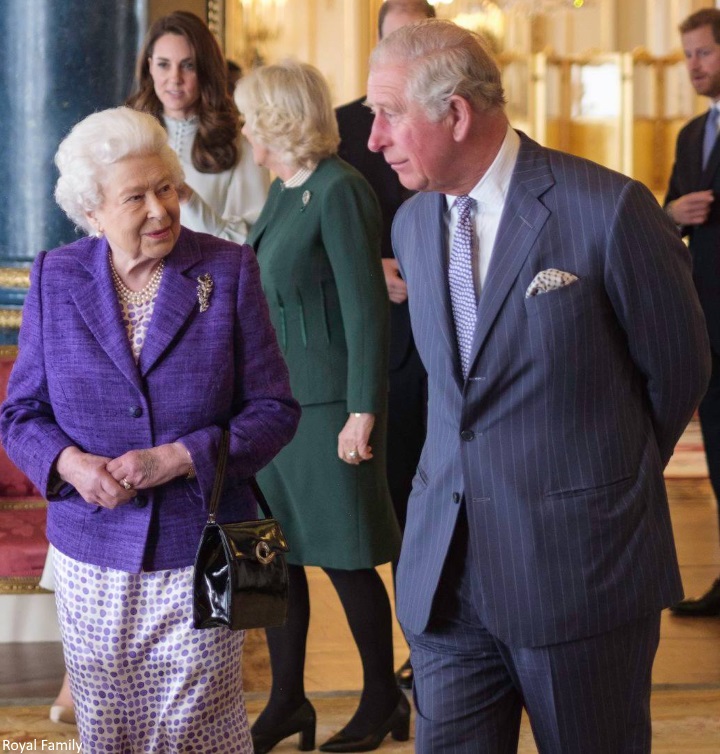 During a speech the Archbishop of Canterbury said:

'Never in the history of the role can there have been such dedicated service, such honourable fulfilling of the promise at the Investiture, ‘I, Charles, Prince of Wales, do become your liege man of life and limb and of earthly worship, and faith and truth I bear unto you, to live and die against all manner of folks.

Service was in the oath, and service has marked the 50 years, service often publicly unnoticed, unseen. A role has been imagined and developed, different to that of the Sovereign, probing, asking, suggesting and prompting, yet always in the service of Crown and country, under God. The Investiture was unique. Seldom can a coming-of-age have had such a setting; seldom can the weight of expectation have been so great.

In years since then, we have seen how the honour of being granted that title has been richly repaid – in The Prince of Wales’s love for the country whose name he bears, and in the deep respect he has always shown for the land, for the language, and most of all, of course, for the people.'


The reception culminated with a musical performance in the Ballroom by students from the Royal Welsh College of Music and Drama, of which Charles is patron. Below, a video from the event.


The Duchess selected a pale blue midi dress with a high collar, full skirt and loose sleeves with a fitted cuff. 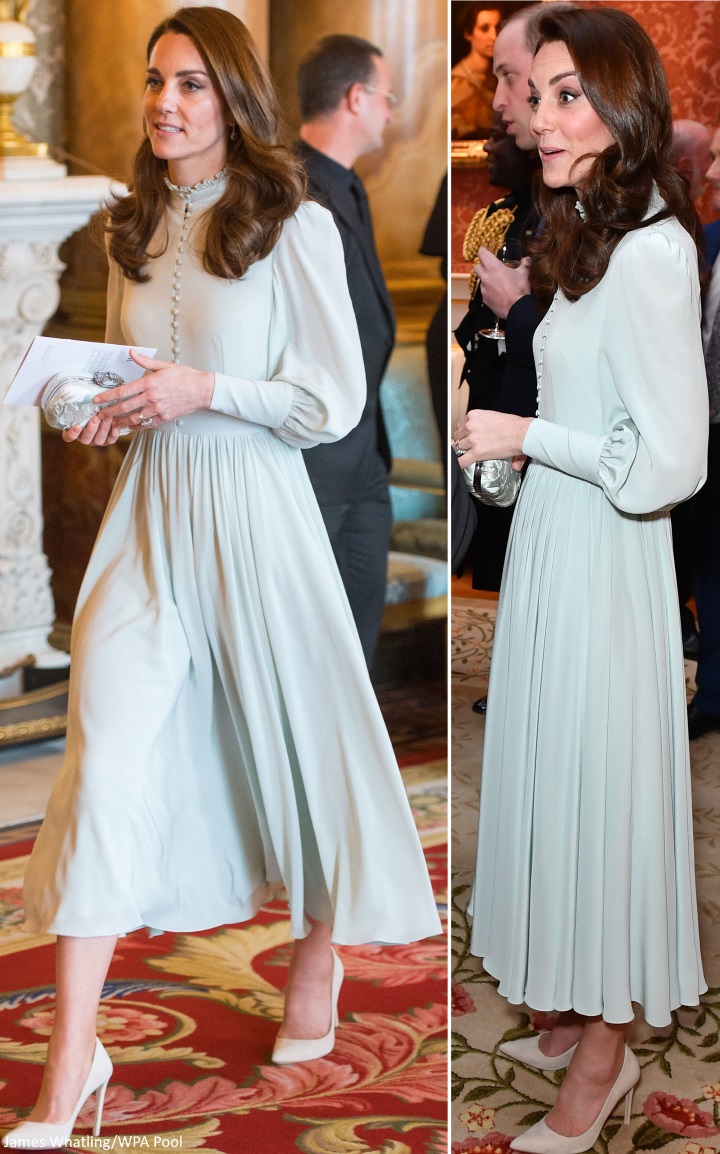 Several of you noted similarities between the piece and Kate's Beulah London Sabitri dress. The dress is not by the brand. The Palace confirms the piece was custom made by Kate's private dressmaker. 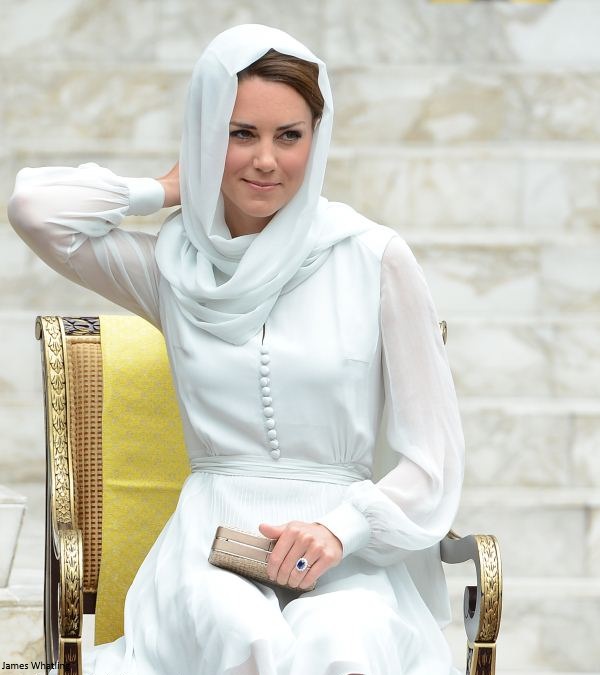 Over the years, the unnamed dressmaker has created a number of items for the Duchess. There's been speculation regarding the identity of the individual ever since. It's been suggested the items may be private gifts from Sarah Burton (certainly, today's dress could have easily been McQueen). Other suggestions include the Queen's assistant and dressmaker Angela Kelly. It's also possible Kate works closely with a dressmaker who alters her clothing and perhaps creates pieces for her now and again? 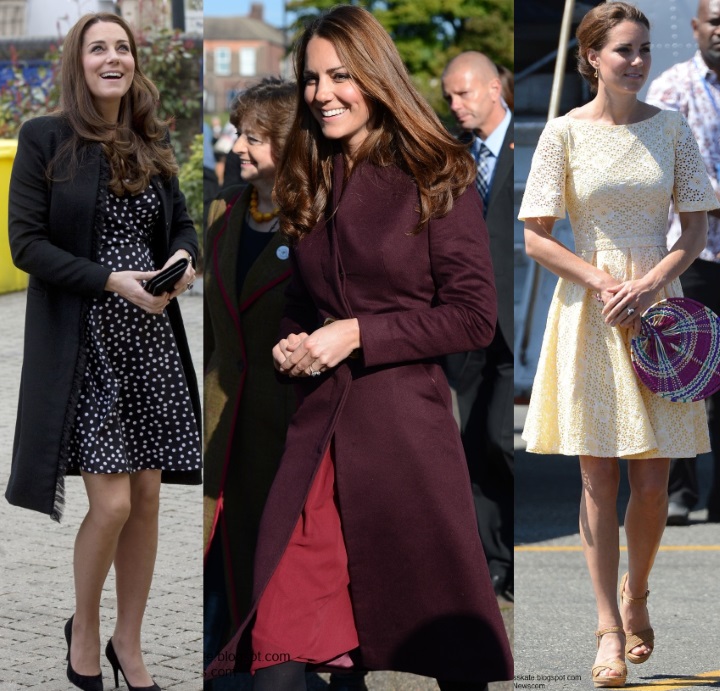 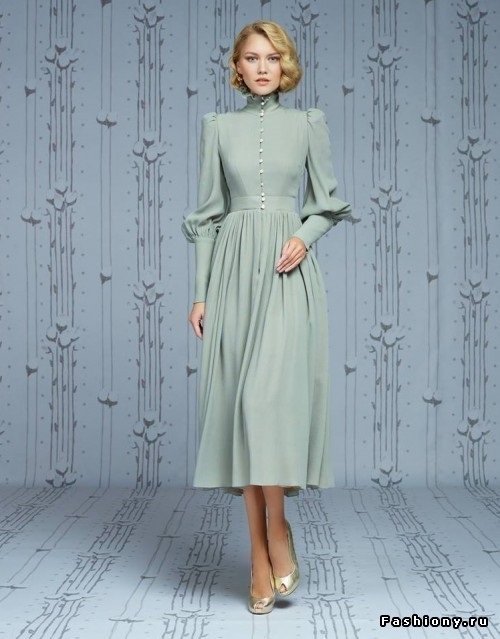 Kate's new pumps are the Emmy London Rebecca Blush style (with thanks to Middleton Maven). 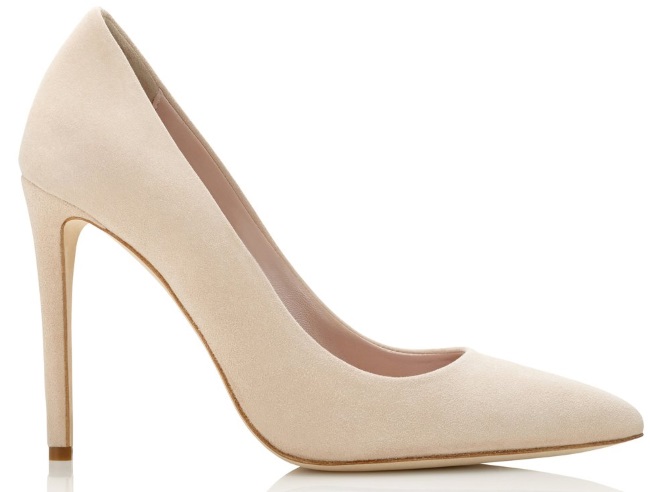 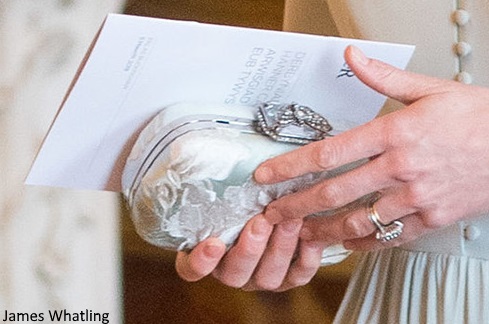 And accessorised with her aquamarine and diamond earrings. 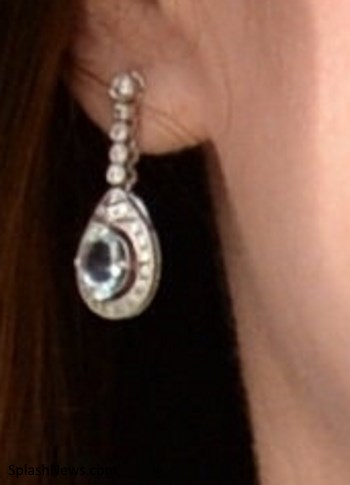 In other news, Kensington Palace confirmed we'll see the Duke and Duchess at the annual Commonwealth Day service at Westminster Abbey on Monday. Before that, the couple have a busy day of engagements in Blackpool tomorrow. They are expected to arrive around midday.
Posted by Admin at 12:28:00