The Baron and Baroness of Carrickfergus concluded a busy day in Belfast with a party at Empire Music Hall to celebrate young people who are making a difference. 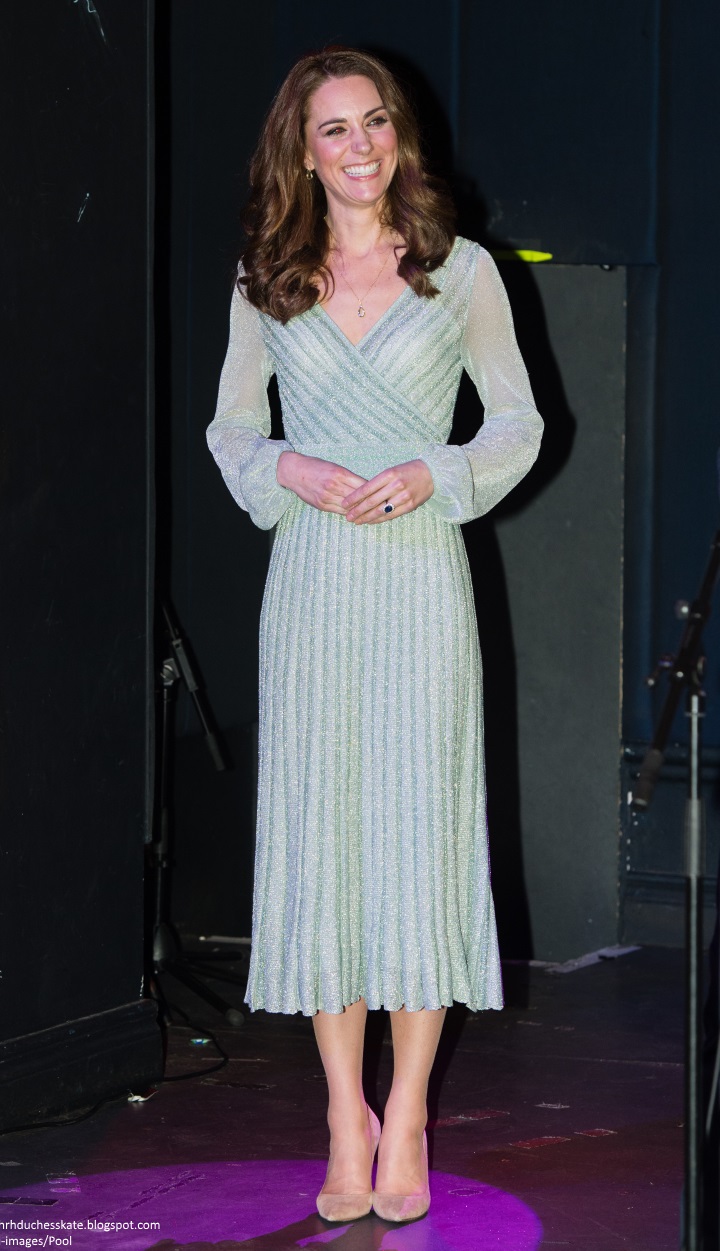 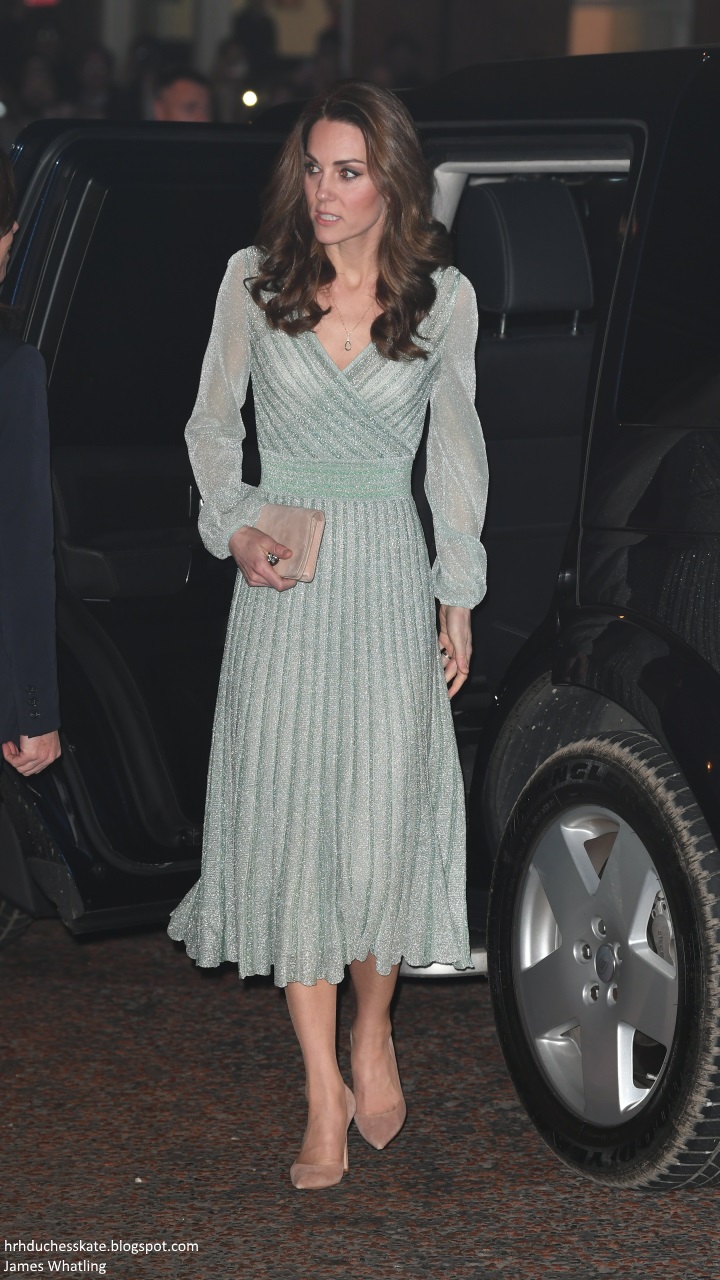 William and Kate arrived in Belfast this afternoon and began with a visit to the Irish Football Association where they learned about several initiatives supporting young people to progress in sports and supporting the mental health of youngsters. The sporty day saw the royal couple take to the pitch for a game of football before travelling to Fermanagh to visit charity Extern at residential activity centre Roscor Youth Village. It was canoeing, archery and walking tightropes before they returned to Belfast for this evening's reception. 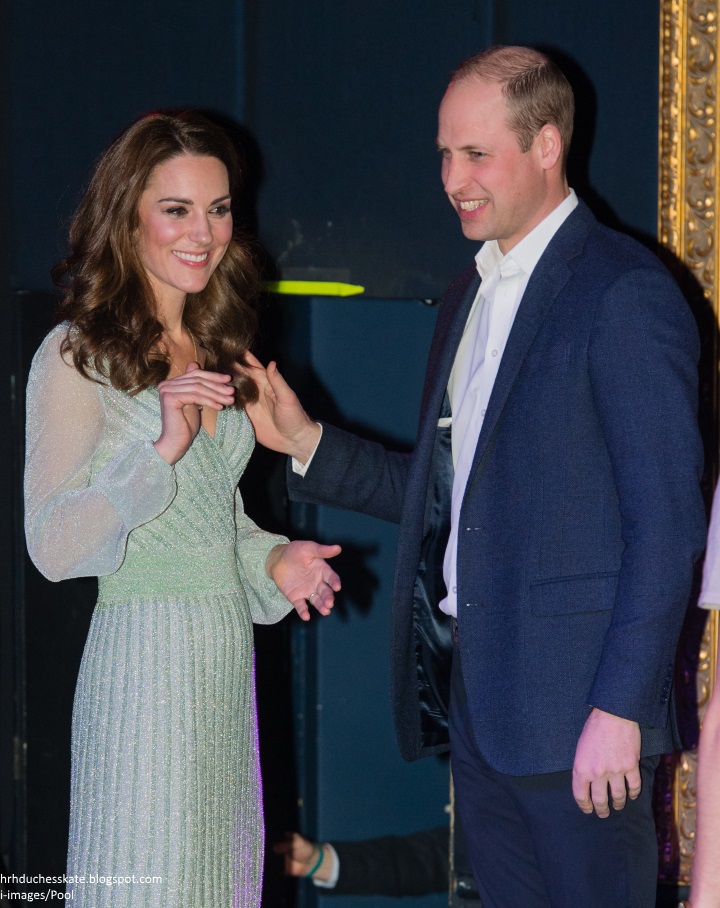 The Empire Music Hall is one of Belfast's musical hotspots offering three floors of bars, blues, rock, jazz and comedy. 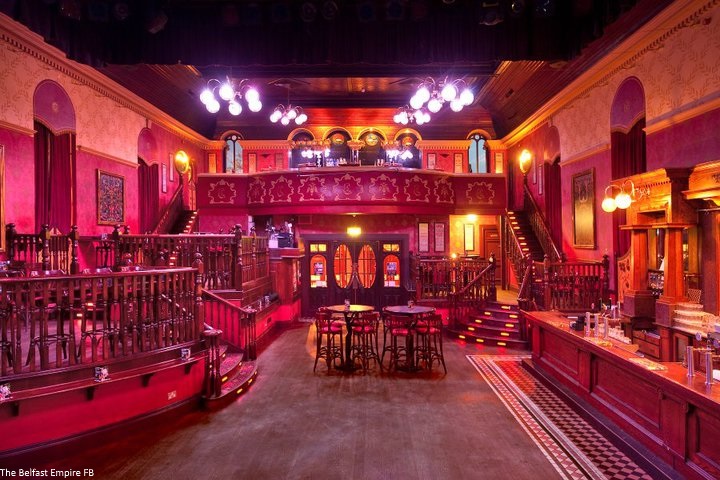 The Duchess surprised guests by pulling a pint of Harp. 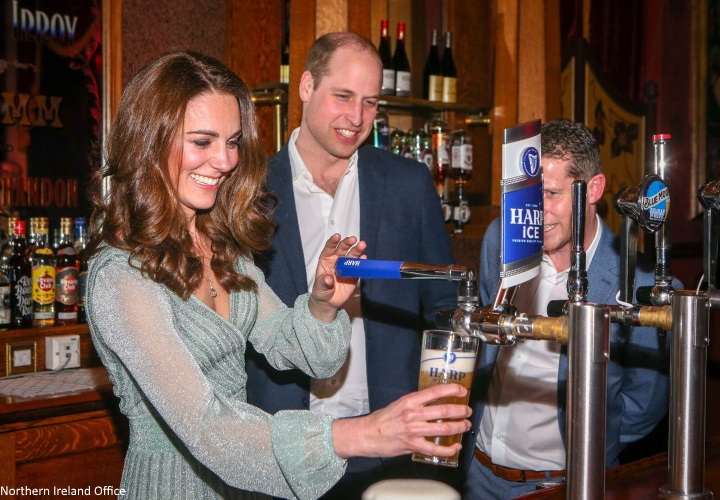 As William took his turn he said: "Look at that bad boy. Perfect. It's good enough for an advert." 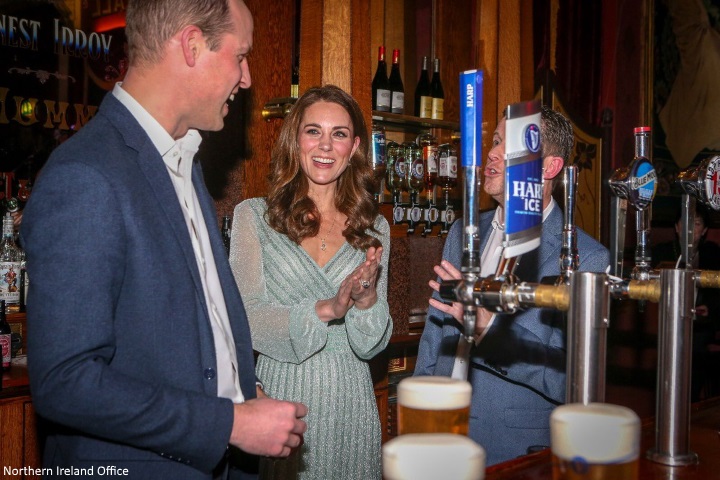 The Prince looked very pleased with the results :) 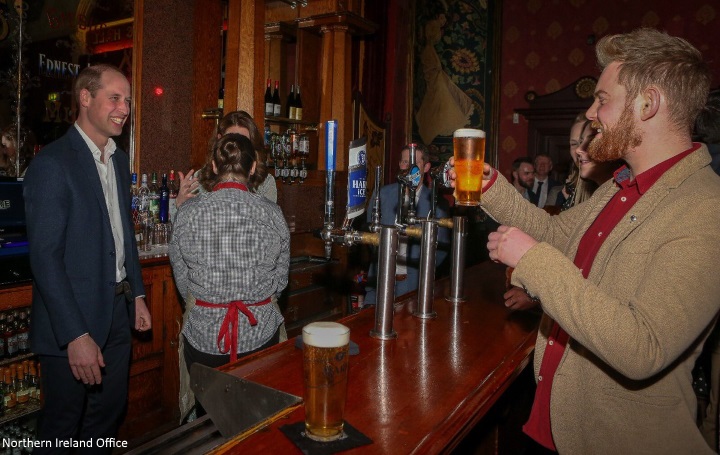 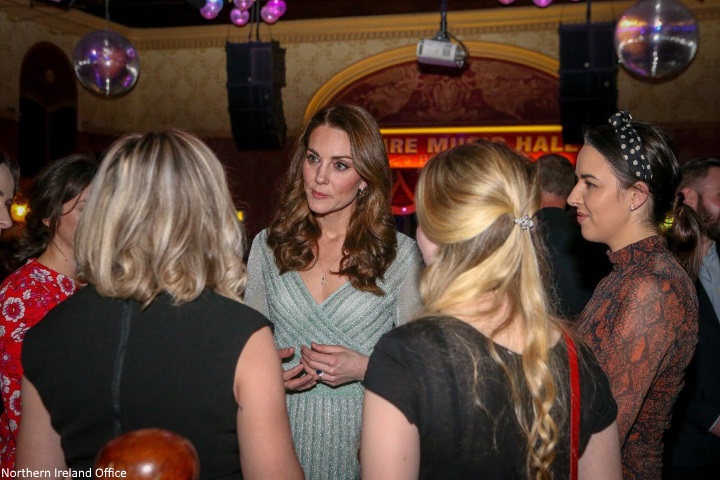 The evening was hosted by the Queen's representative Mrs Fionnuala Jay-O’Boyle CBE. 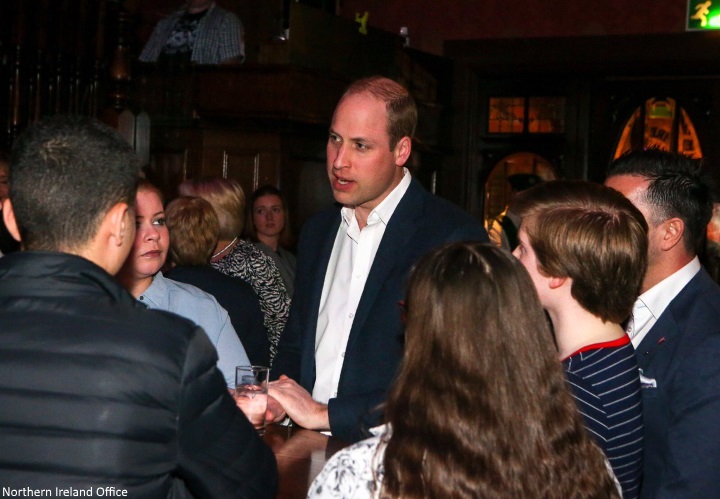 The Baron and Baroness were delighted to meet Dame Mary Peters. 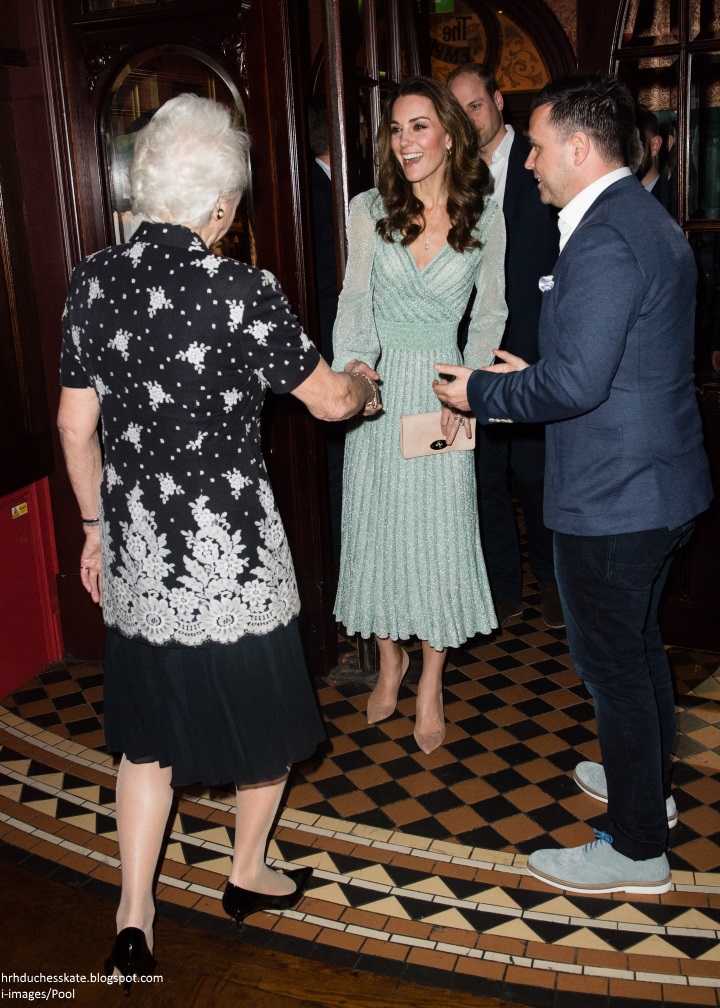 Earlier today Dame Peters was appointed Lady Companion of the Most Noble Order of the Garter by Her Majesty the Queen. 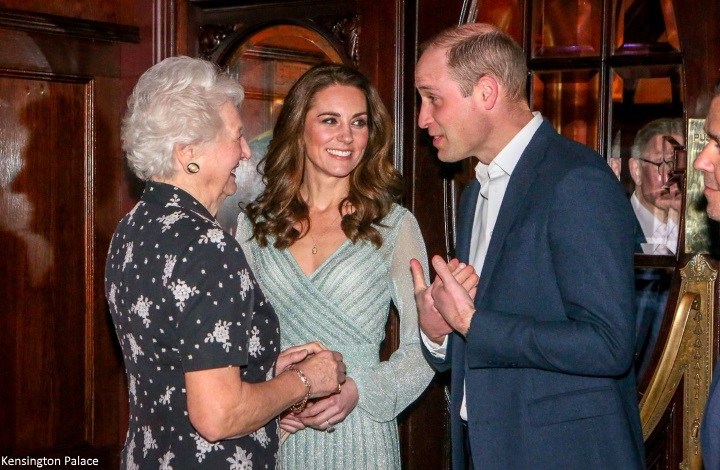 In medieval times, King Edward III was so inspired by tales of King Arthur and the chivalry of the Knights of the Round Table that he set up his own group of honourable knights, called the Order of the Garter. Nearly 700 years later, the Order is the oldest and most senior Order of Chivalry in Britain. The knights, now both male and female, used to be limited to aristocracy, but today they are chosen from a variety of backgrounds, in recognition for their public service. 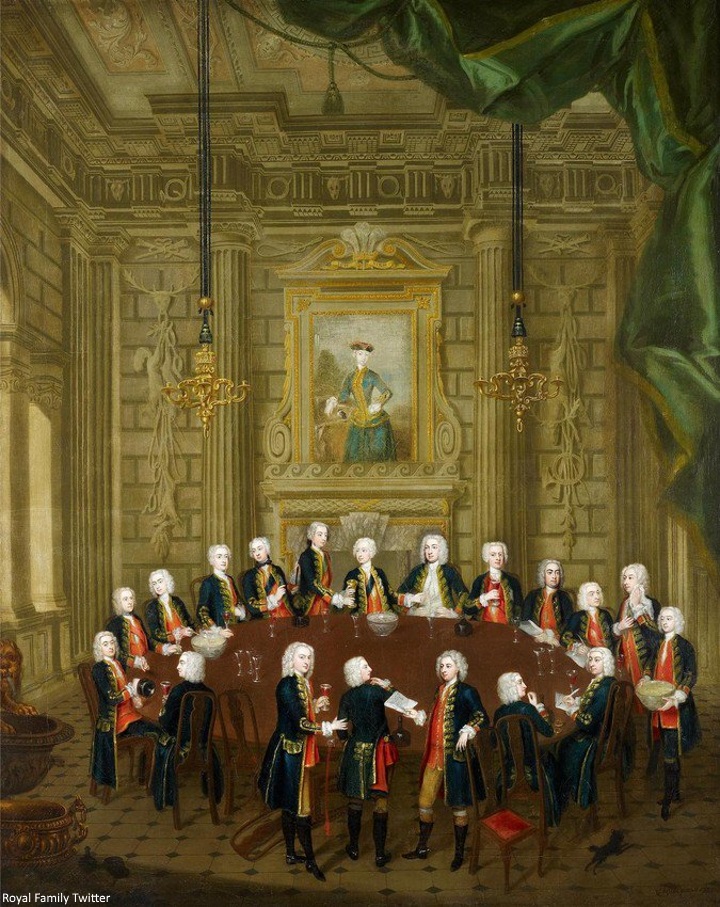 Mary Peters was born in Lancashire, but moved to Northern Ireland when she was eleven after her father's job was relocated. During her time at Portadown College the headmaster introduced her to athletics. In the 1972 Summer Olympics in Munich, Peters won the gold medal in the women's pentathlon, setting a world record score. The win came at the height of the Troubles. After her victory, death threats were phoned into the BBC: "Mary Peters is a protestant and has won a medal for Britain. An attempt will be made on her life and it will be blamed on the IRA... Her home will be going up in the near future." Despite this, Peters insisted she would return home to Belfast. She was unable to live in her flat for three months after her return due to fears for her safety. In 1975, she established the Mary Peters Trust to support talented young sportsmen and women, both able-bodied and disabled, from across Northern Ireland. Today, the trust is Northern Ireland's leading sporting charity. 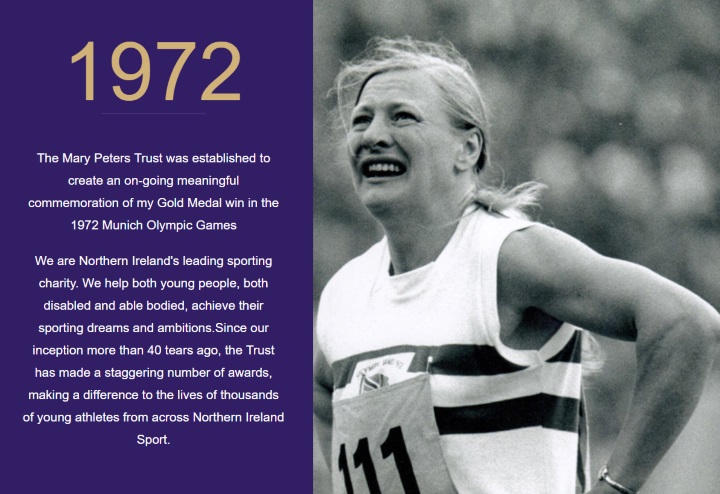 During a speech, William praised Mary Peters work. More from the Mail Online:

'Catherine and I are grateful to be amongst so many inspirational young leaders this evening. Over the course of the day, we've had the great privilege of meeting some of you personally and seeing first-hand the work that you are doing.

From using sport to encourage people to talk openly about mental health to delivering services to children and young people who are at risk of entering care or custody - the work you do transcends community divisions and is helping deliver a brighter future for everybody in Northern Ireland. And as we celebrate those who are leading that change for the next generation, it is also fitting that we recognise somebody else in the room this evening - who helped inspire so many of you in the first place.

'Mary Peters, is not only one of the United Kingdom's sporting legends, she's also inspired generation after generation to come together in times of trouble and work for the common good - a lesson I hope many of us can learn from. So it was fitting today that Her Majesty The Queen has appointed Mary to be a Lady Companion of the Most Noble Order of the Garter - one of the UK's highest honours. And I hope you can all join me in thanking and congratulating her personally this evening.'


Amid an incredibly challenging time in the UK, William's speech brought Brexit to mind. More from Martin Robinson:

'The Duke of Cambridge has urged people to 'come together in times of trouble and work for the common good' in a speech echoing the Queen's call for unity on Brexit as he pays a visit to Northern Ireland. Meanwhile the second-in-line used the opportunity to praise individuals seeking to work for 'the common good', which was thought to be a thinly veiled reference to Brexit, in a speech which echoed the sentiments of the Queen's a month earlier.'


A video from the night with footage of William's speech and the couple pulling pints. 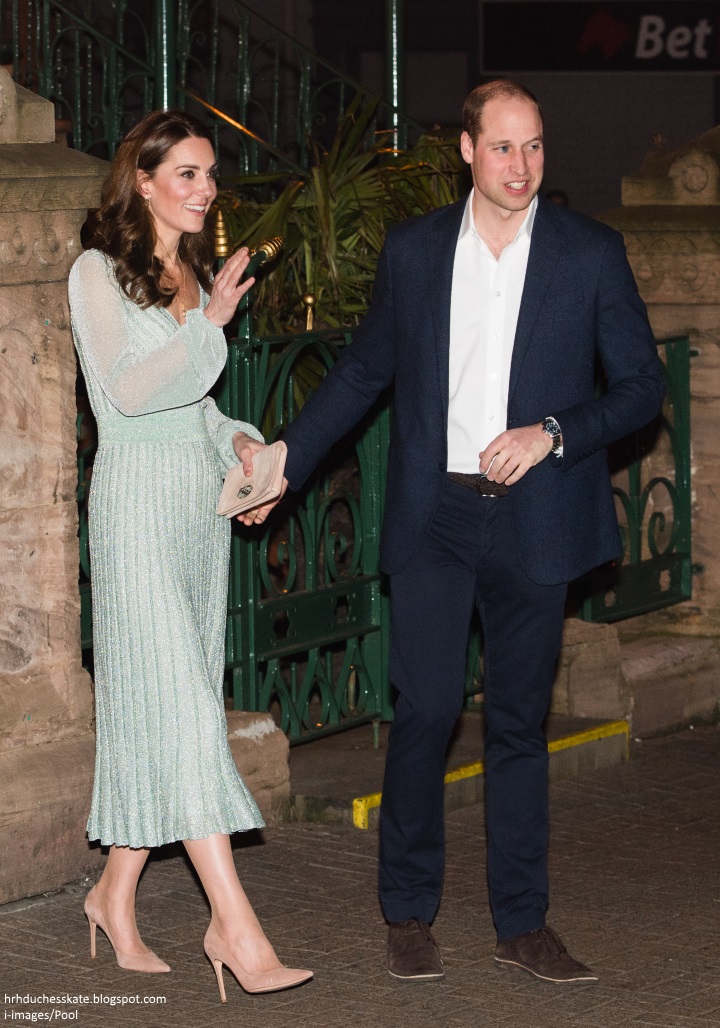 The Baroness looked elegant in the mint green Missoni Metallic Lurex Dress (with thanks to Middleton Maven). I suspected we would see Kate in green for the visit at some point; this was a very nice choice for the occasion. 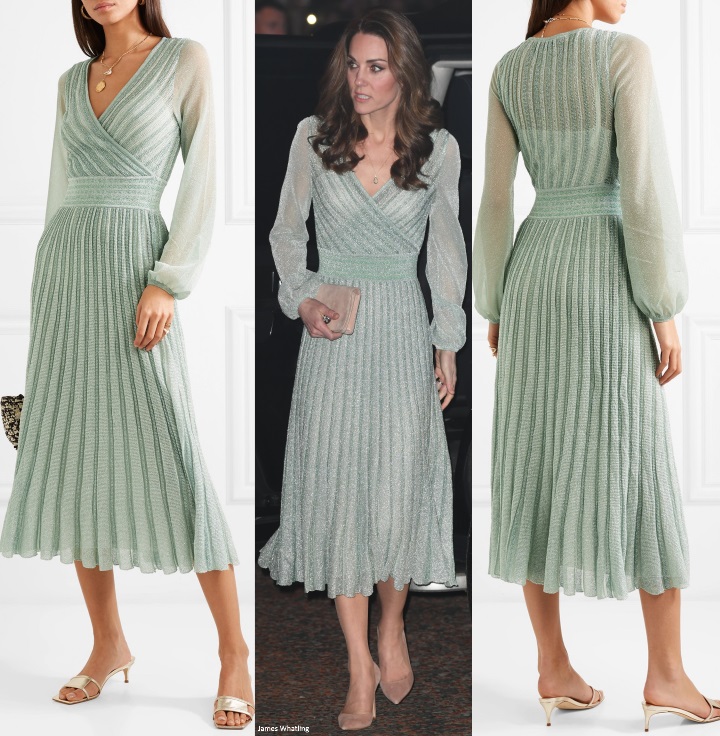 Made in Italy, the £1,325 dress is described: "Missoni's whisper-weight mint Lurex dress is woven with shimmering threads and has an elegant V-shaped neckline - the pleated midi skirt looks really classic, too." The lightweight knit piece is available at Net-A-Porter. 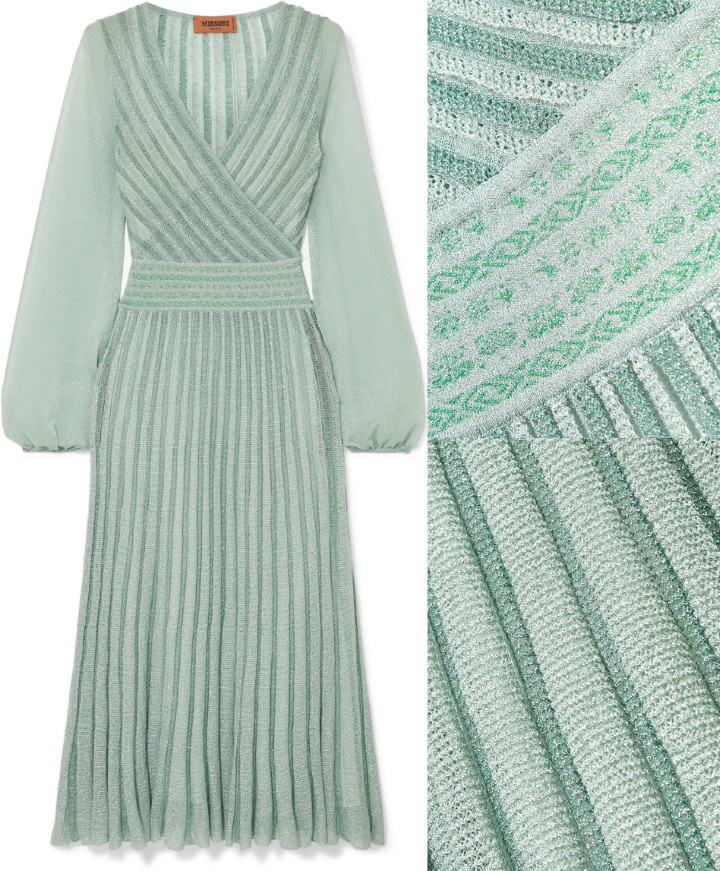 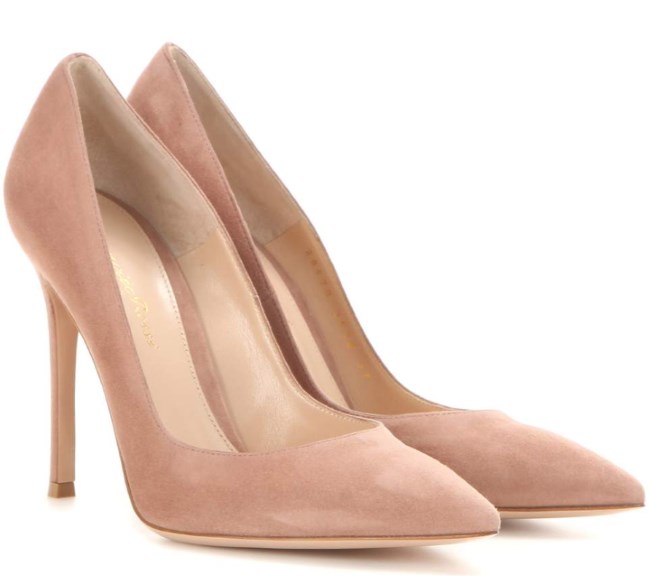 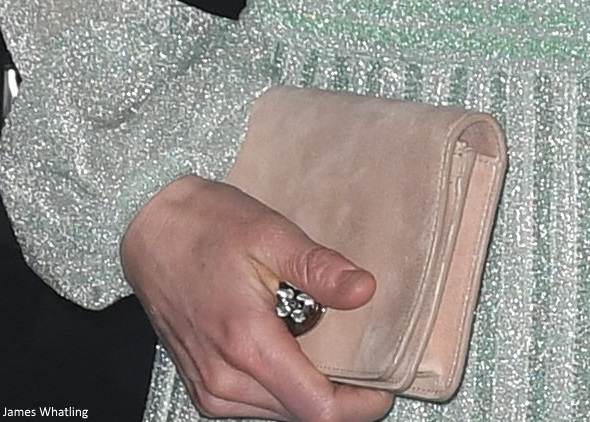 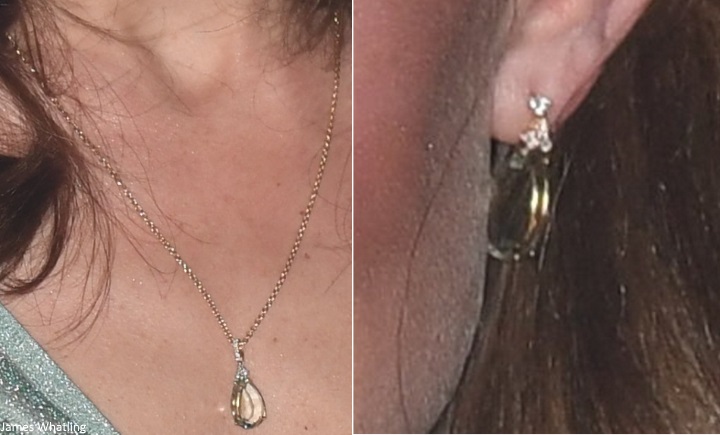 The pieces are from Kiki's Candy collection. The £2,100 mini Green Amethyst smooth cut stone earrings are set in 18ct gold with dazzling diamonds (with thanks to Emma and Laura). 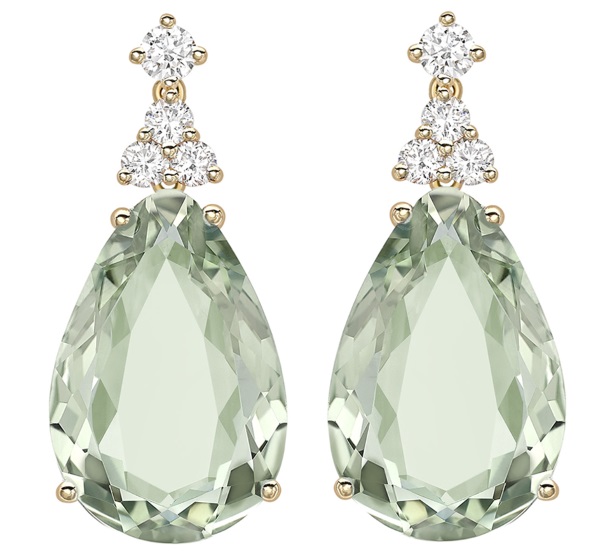 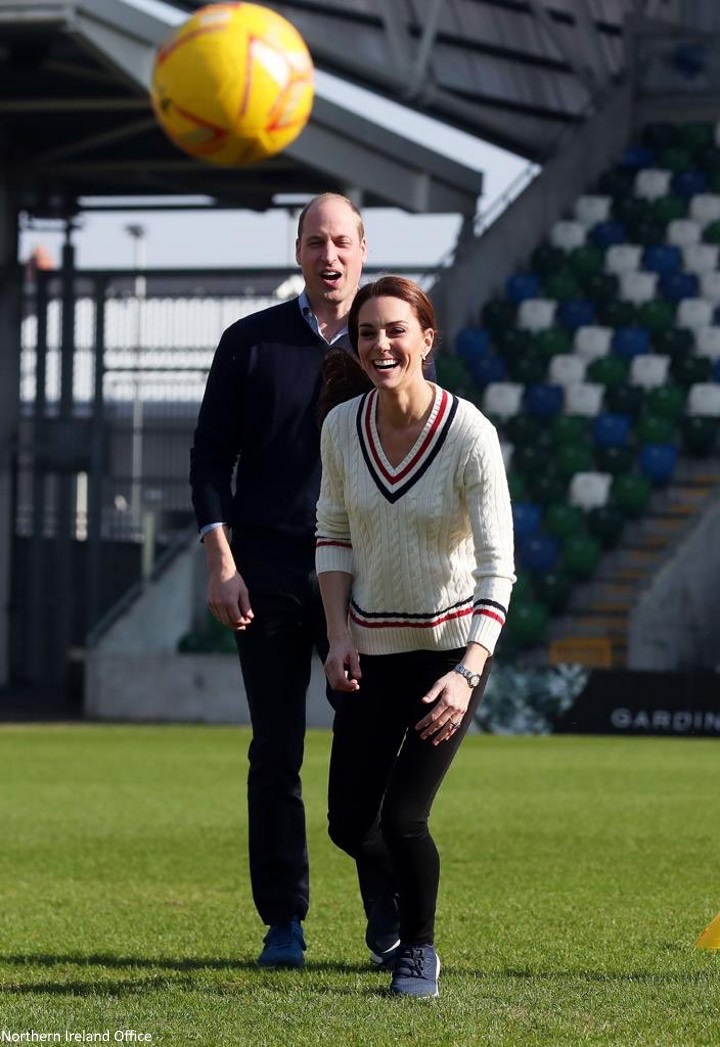 The couple will have several engagements in Northern Ireland tomorrow before returning to London. Due to security reasons, I expect we won't see the itinerary until the morning. 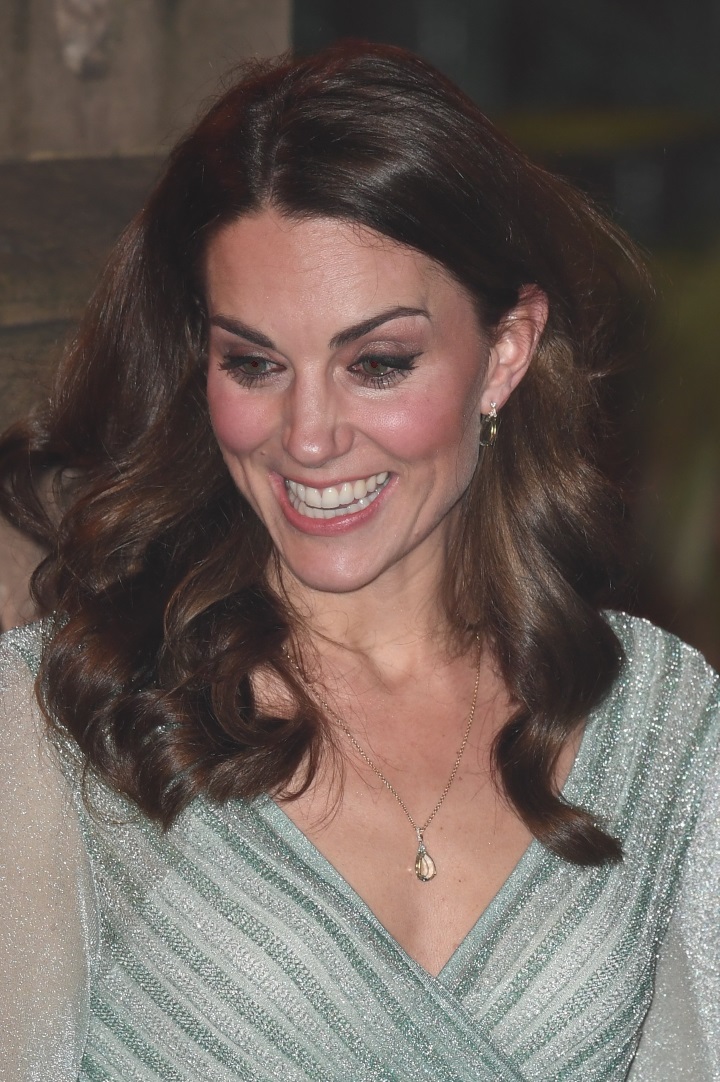