Kate in Festive Ensemble for RAF Christmas Party: "The Absence Of People You Love Must Be Especially Hard At This Time Of Year."

December is well and truly upon us. I utterly adore the festive period and the weeks leading up to Christmas. It's also one of my favourite months on the royal calendar with a host of seasonal engagements carried out by members of the royal family. Today, the Duke and Duchess of Cambridge hosted a Christmas party at The Orangery at Kensington Palace for for families and children of deployed personnel from RAF Coningsby and RAF Marham serving in Cyprus. 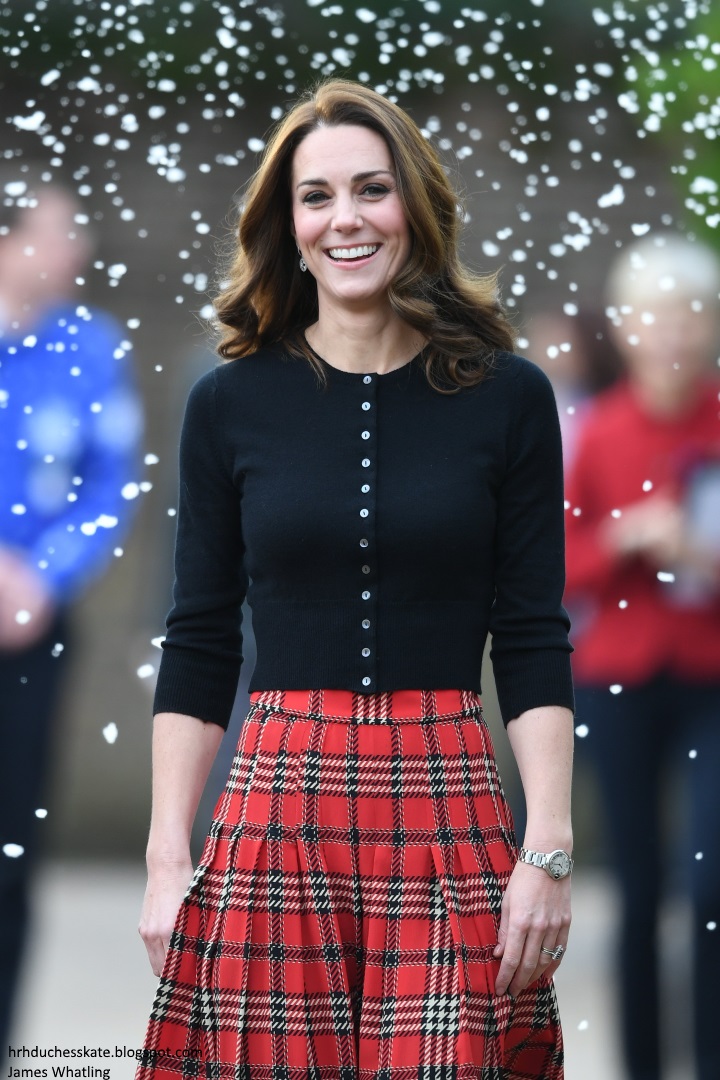 The couple laughed as they walked past the snow machine. Their staff got into the spirit in festive jumpers. Catherine Quinn is behind Kate in red. 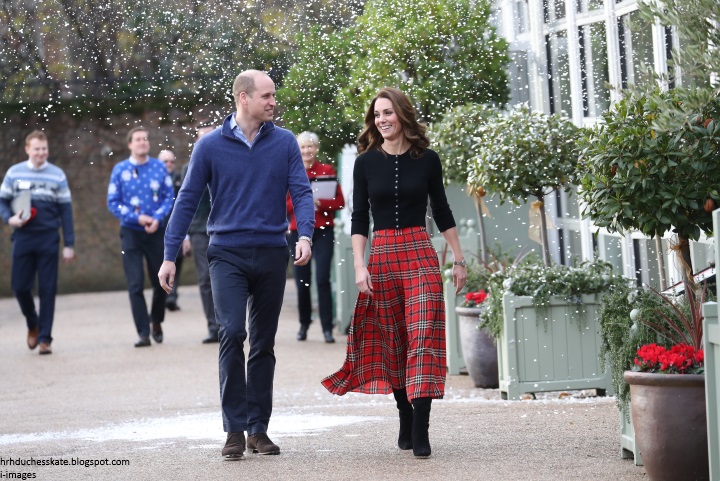 It is the first of two engagements for the couple in support of deployed military personnel and their families who will be apart over the festive period. Tomorrow, they will travel to RAF Akrotiri in Cyprus. Approximately 7,500 military personnel are currently serving overseas or away from home on exercises. A large portion of these have children who will have a parent away over Christmas. The Palace said: "Their Royal Highnesses wish to deliver a message of support to deployed personnel and to acknowledge and honour the fact that many Serving personnel are away from their families at this time of the year." 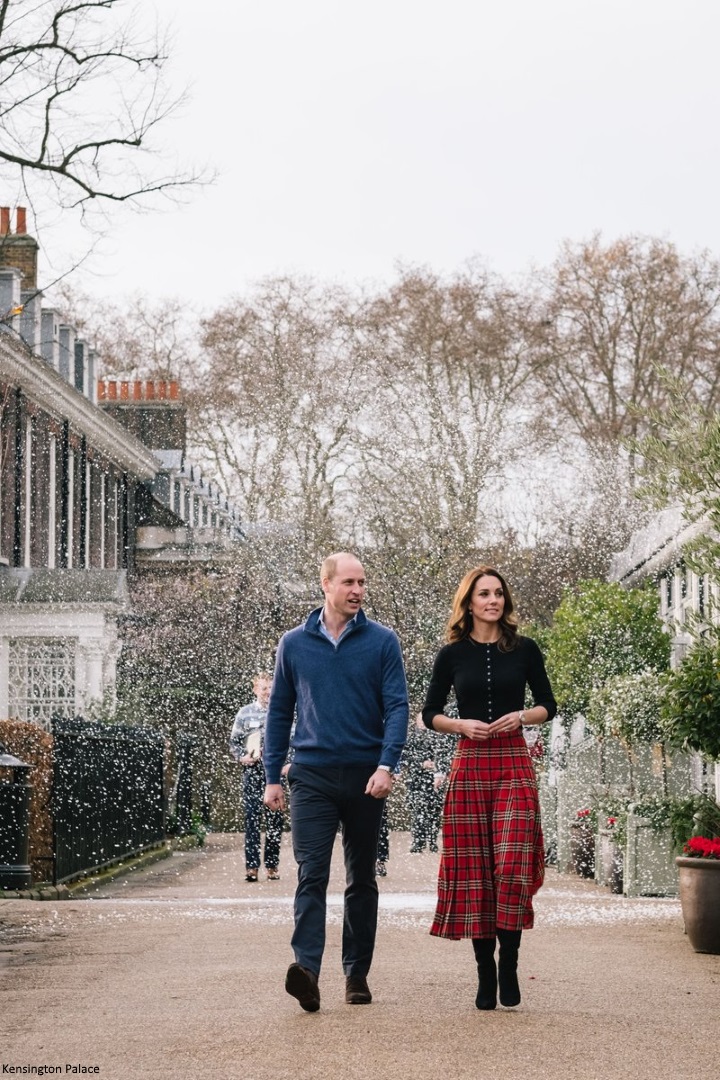 Prince William is Honorary Air Commandant of RAF Coningsby, Lincolnshire, which is home to Typhoon Sqns, who currently deploy to Cyprus in support of Op SHADER. RAF Marham have 31 Squadron, who are also contributing to OP SHADER. The Duchess is Honorary Air Commandant of RAF Air Cadets. The Duke of Edinburgh passed on his Patronage to the Duchess in 2015, after 63 years as Air Commodore-in-Chief. 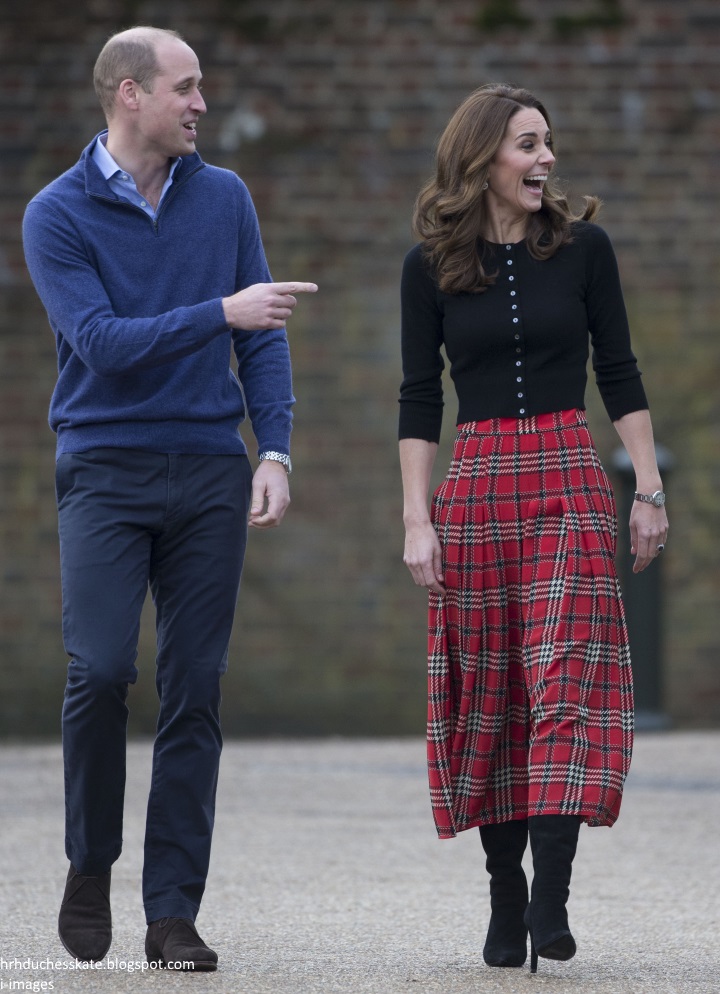 The event was supported by The Royal British Legion in recognition of the unique contribution and sacrifices Serving personnel and their families make year round, and especially when they are separated during the festive period. The support of their families and loved ones is vital not only when personnel are serving, but through transition, recovery and civilian life after service, and The Royal British Legion ensures that those family members are supported in return. 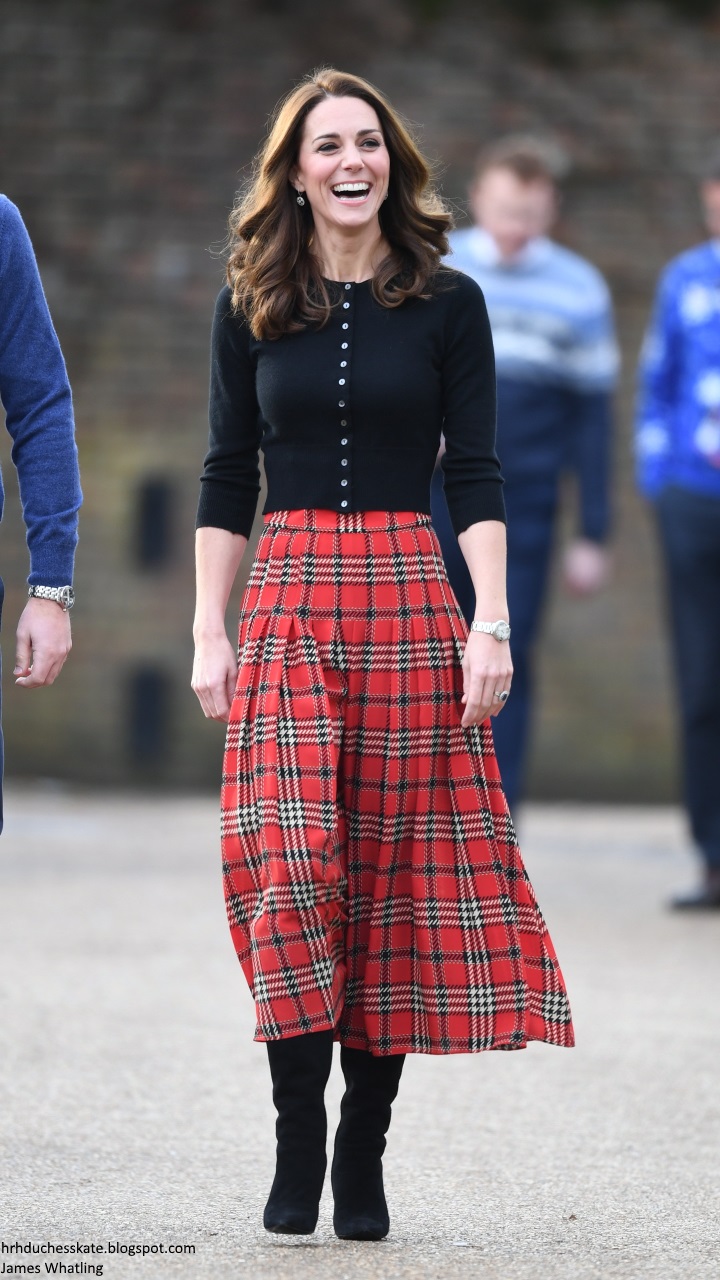 The party was planned with meticulous attention to detail. 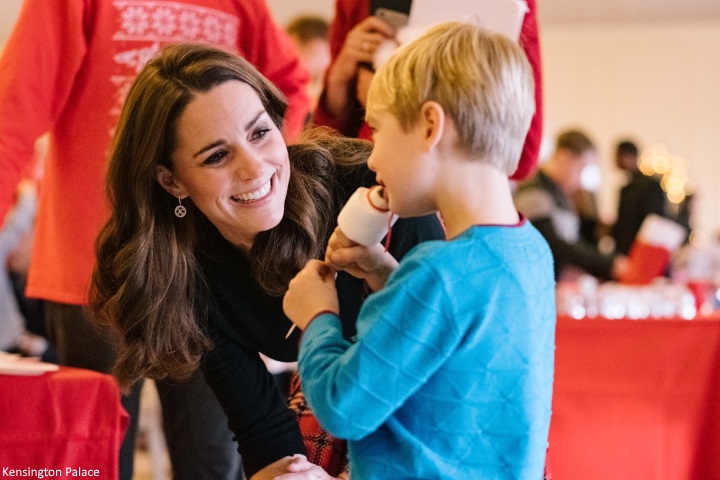 I imagine the brief for the day was ensuring the children had a fantastic time. 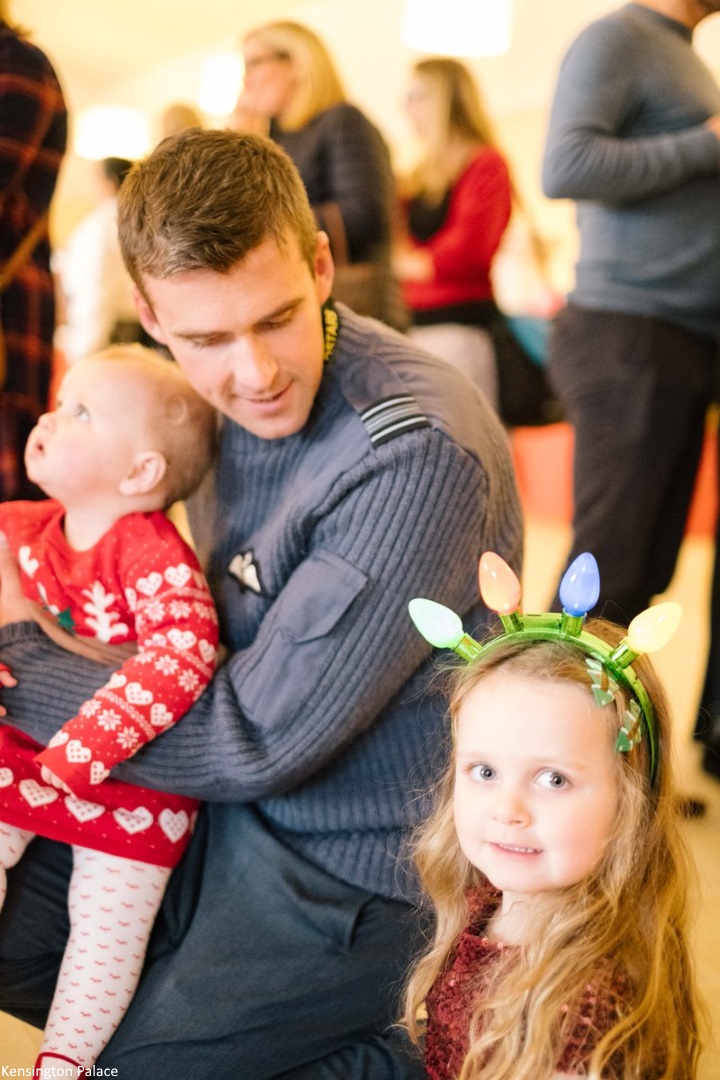 Kate was in her element meeting babies and young children. 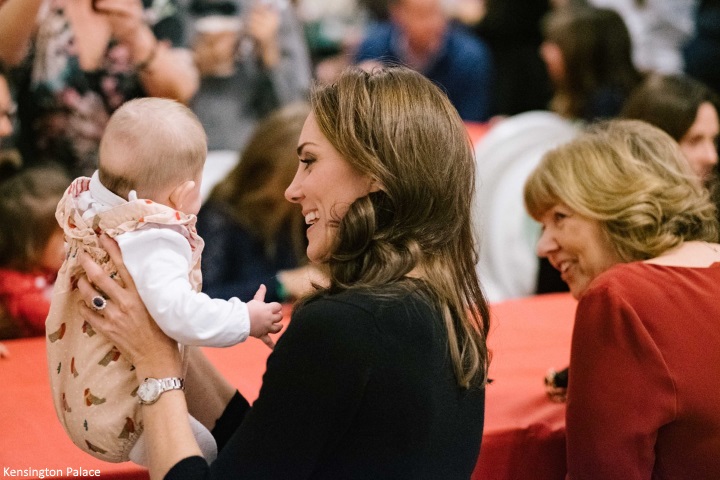 'Emily Staite chatted with Princess Kate as children threw around soft balls and generally dashed around. She shared two children, ages 2 and 4, with her husband, Neil, who will be stationed in Cyprus for Christmas.

“It is chaotic,” Staite said as she surveyed the party scene, “And I take my hat off to them for doing this. It is lovely, a nice thing to do. We spend a lot of time on our own so it is nice to do something different.”

She added, “People overlook how hard it is, how lonely it can be for people at home, especially when things go wrong when partners are deployed. It can be quite hard.” 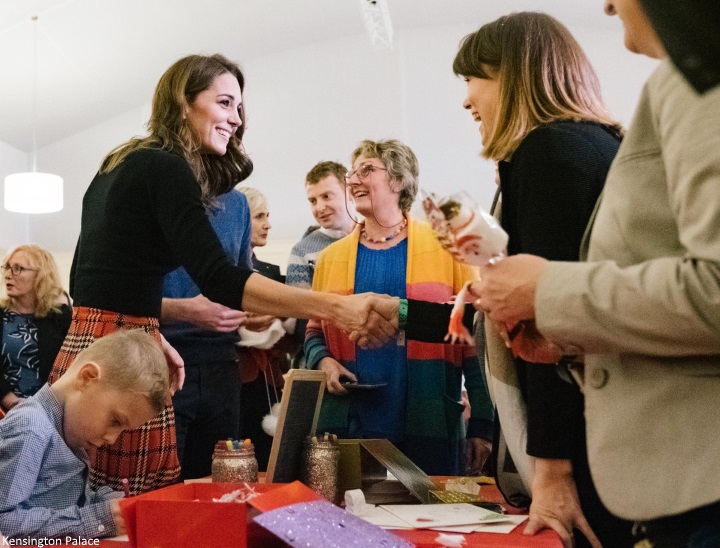 There was children’s entertainment from Sharky and George, as well as a photo booth and a post box so that guests can take pictures and send messages to their loved ones in Cyprus. 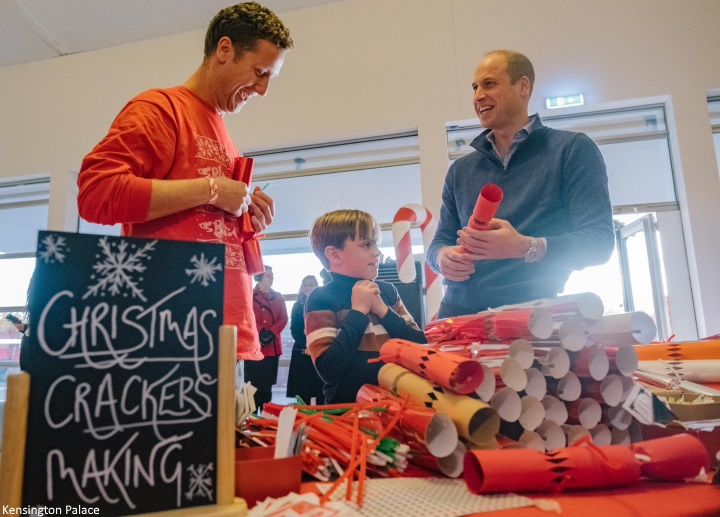 Santa made the trip for the party :) 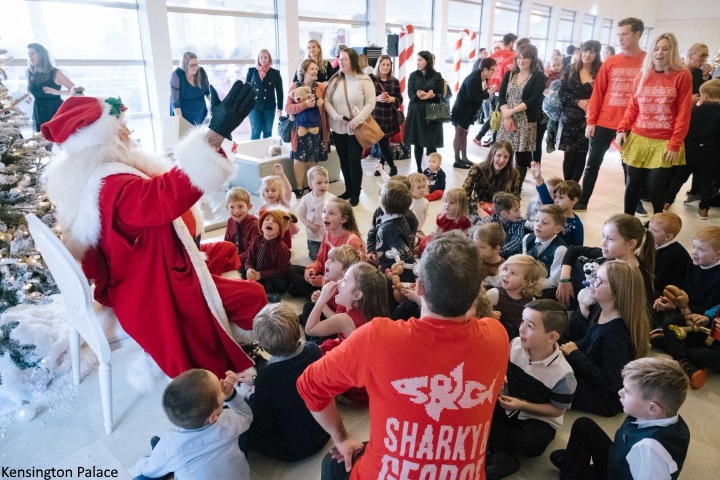 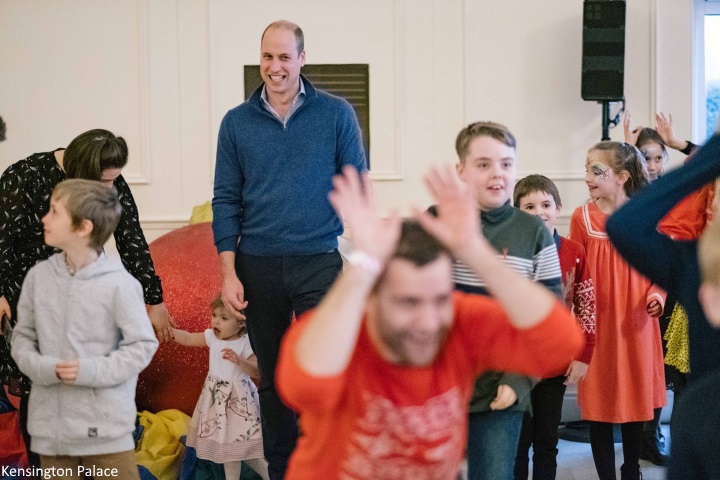 William revealed they decided to get Lupo due to his time away with the RAF. People reports:

'Natalie Bressani – who is mom to Luca, 14, and Anona, 11 – said William and Kate were helping “lift the spirits” of the Royal Air Force families separated from their loved ones at a Christmas party at Kensington Palace on Tuesday. And she revealed that the royal couple got their English Cocker Spaniel, Lupo, to help them at a difficult time.

“When Prince William was away in the Falkland Islands, he went for dinner with some good friends of ours in the Air Force, and he was saying how difficult it was for Kate because he was leaving for six weeks. It was when they’d just got the Spaniel to help her with the time apart,” said Bressani. “She appreciates what wives and families go through.”


During a personal speech, Kate reflected on her time as a RAF wife. "As someone whose husband has served, I know how hard it feels when a loved one leaves to do the job they trained for,” she said. “When William served doing search and rescue, I remember how I felt, but I can’t imagine how it feel when your loved ones are away on active service during Christmas. The absence of people you love must be especially hard at this time of year." 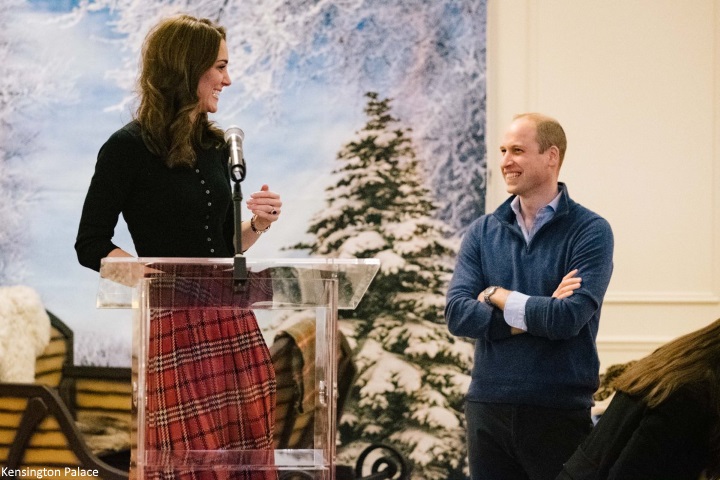 The Duchess added: "We are really looking forward to flying to RAF Akrotiri in Cyprus tomorrow and meeting some of the mums and dads of the little ones we have met today. I am sure they will be thrilled with all your cards and gifts, so thank you for posting them today." 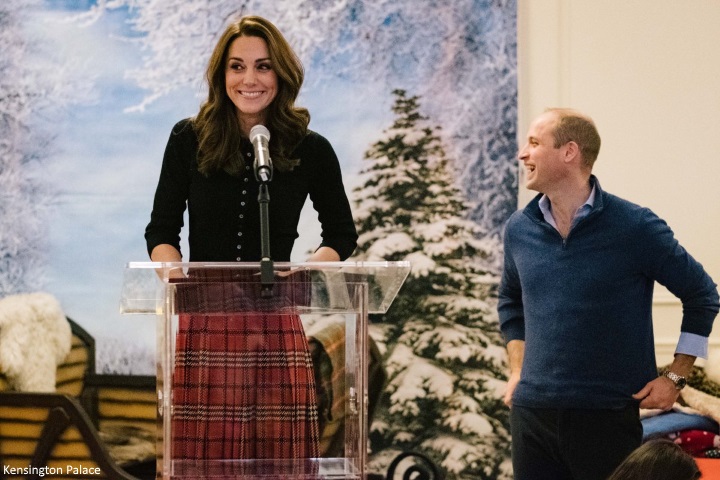 
William and Kate enjoyed a snowball fight as they departed. 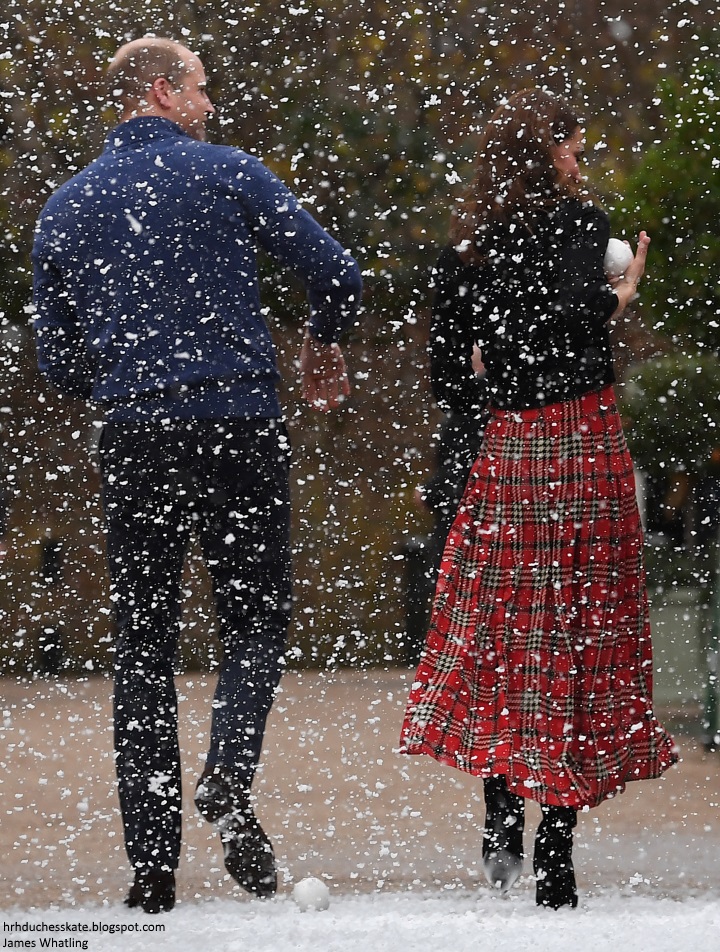 A video of the couple leaving.


If you would like to support the Royal British Legion, take a look at their Christmas gift options.They include Horse Guards Parade Christmas cards. A pack of ten is just £3.99. If considering purchasing cards at Sainsburys, a portion of the profits from their charity cards goes directly to the Legion. It can be a particularly difficult time of the year for many in the Armed Forces community, with financial pressures and coping with loneliness. To provide additional support, the Legion are operating a Live Chat tool from 8 am to 8 pm. 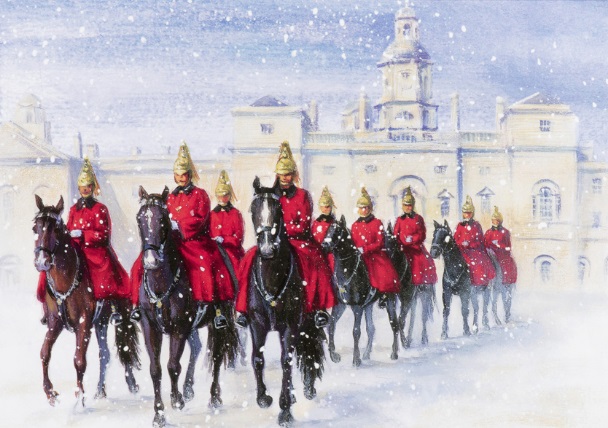 The Duchess was seasonally attired in a black cardigan and red tartan skirt for the party. I love this look and thought it a perfect choice for the occasion. The engagement involved getting involved in activities with children, meeting families and delivering a speech. It was both a comfortable and stylish choice. 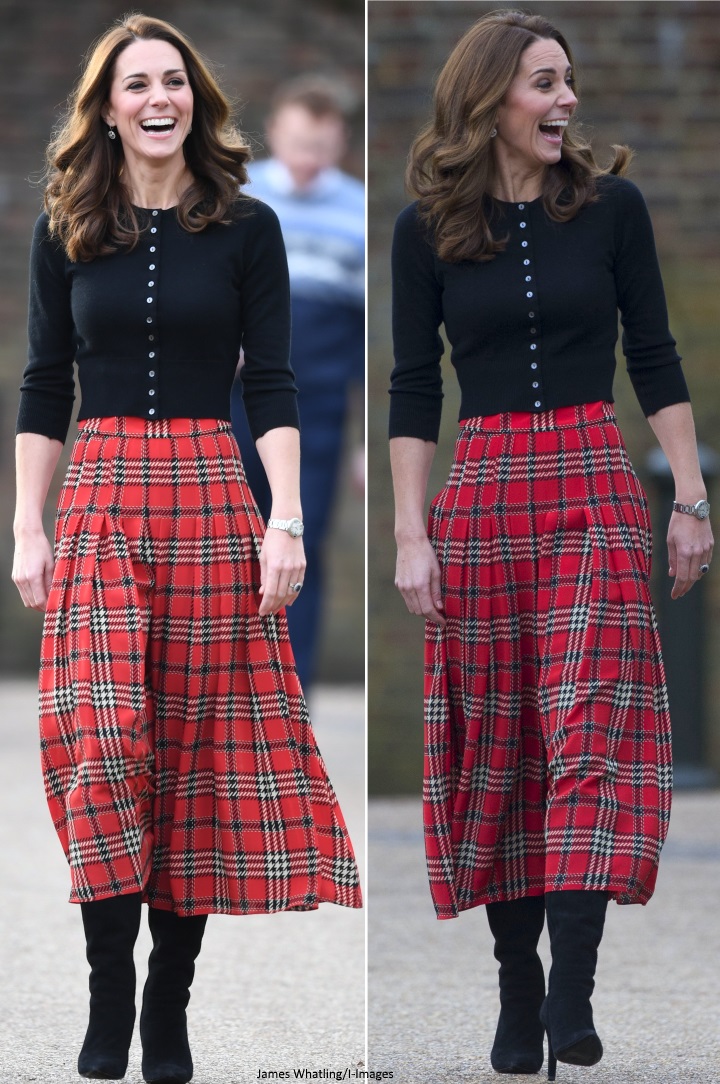 Kate wore the Cropped Cashmere cardigan by Scottish brand Brora (with thanks to Emi). The £209 piece is described as: "The overwhelming popularity of our iconic, cropped cashmere cardigan really speaks for itself. Designed to accentuate a smaller waist, this neat knit is the perfect." 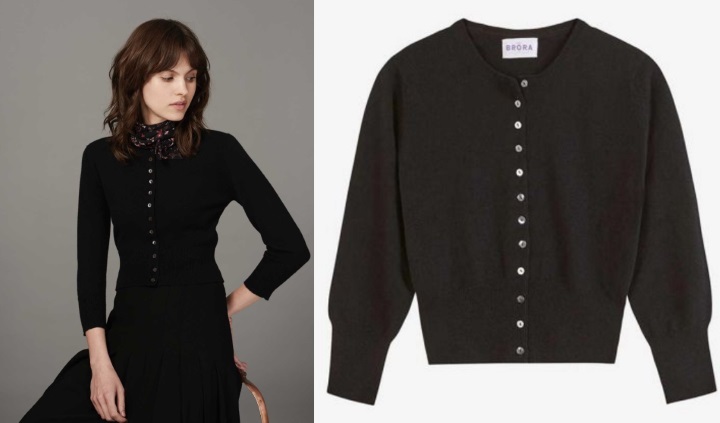 The video below tells the story of Brora Scottish cashmere.

Kate's skirt is from Emilia Wickstead's Autumn/Winter 2018 collection. The tartan check Pris Pleated Skirt is cut in an a-line silhouette from sturdy flannel that has sharp knife pleats throughout. Cinched with a belted waist, its designed in classic tartan check. 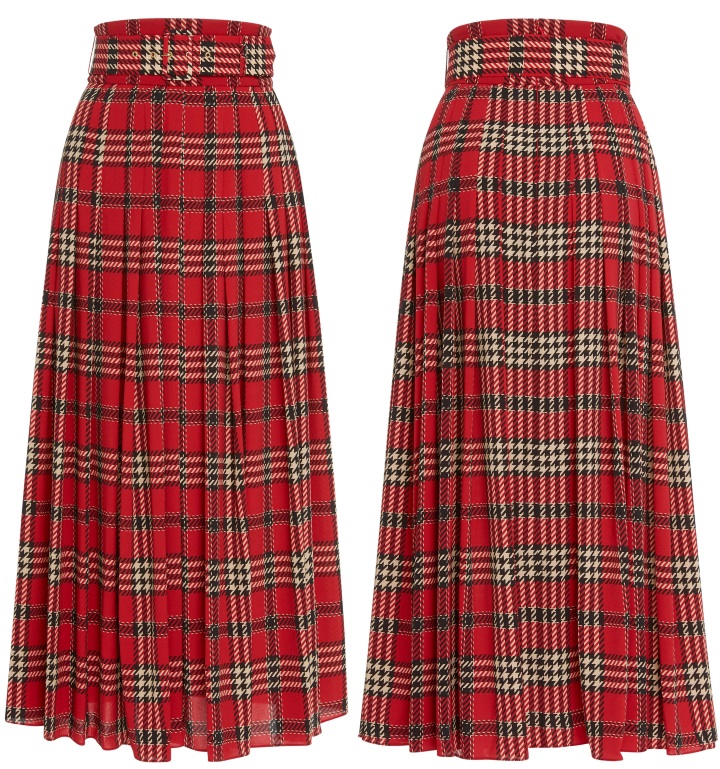 Susan from What Kate Wore noted the collection was inspired by the film Love Story. In particular, the plaid skirts worn by Ali McGraw's character. 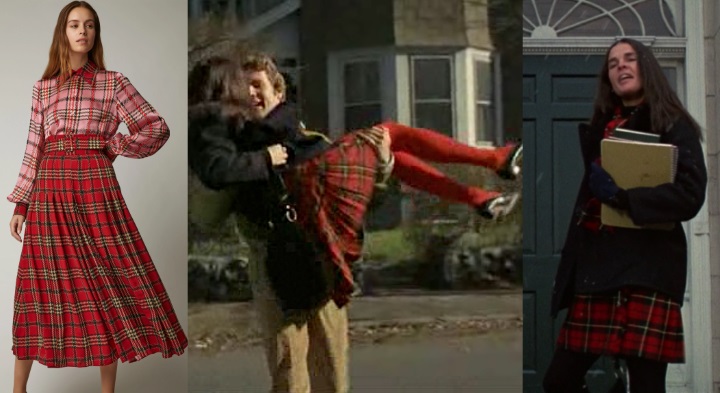 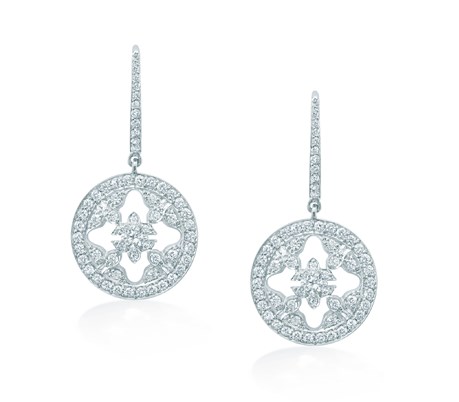 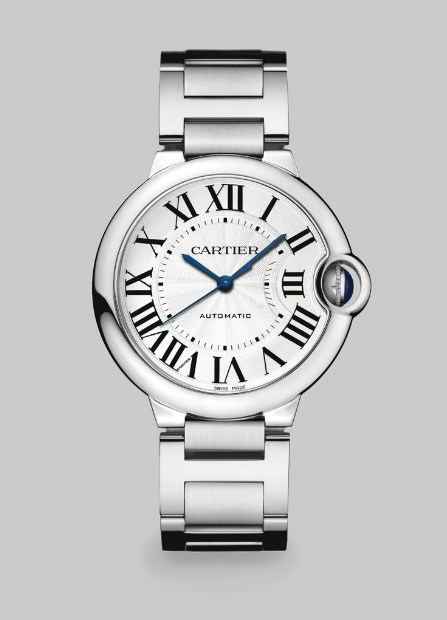 Kate completed the look with a pair of black boots. We'll update when they are identified. 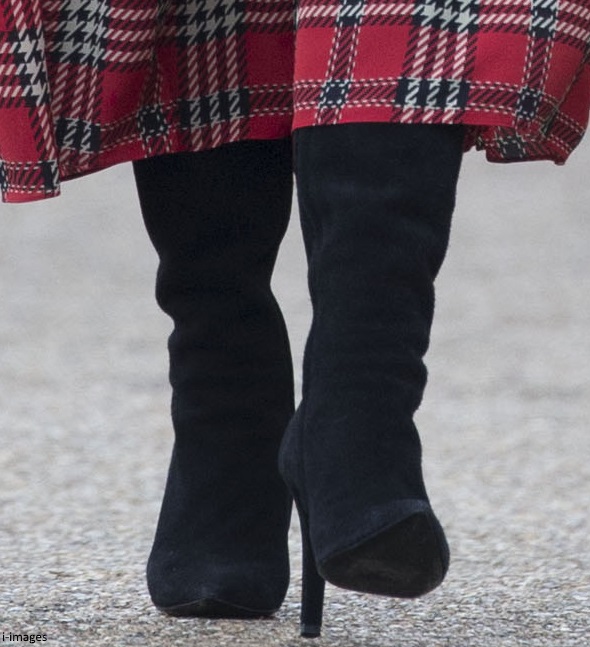 We expect to see the Duke and Duchess arriving for the annual Diplomatic Reception tonight.
Posted by Admin at 13:37:00