The Duke and Duchess of Cambridge attended the Gentlemen's Singles Final of Wimbledon this afternoon. 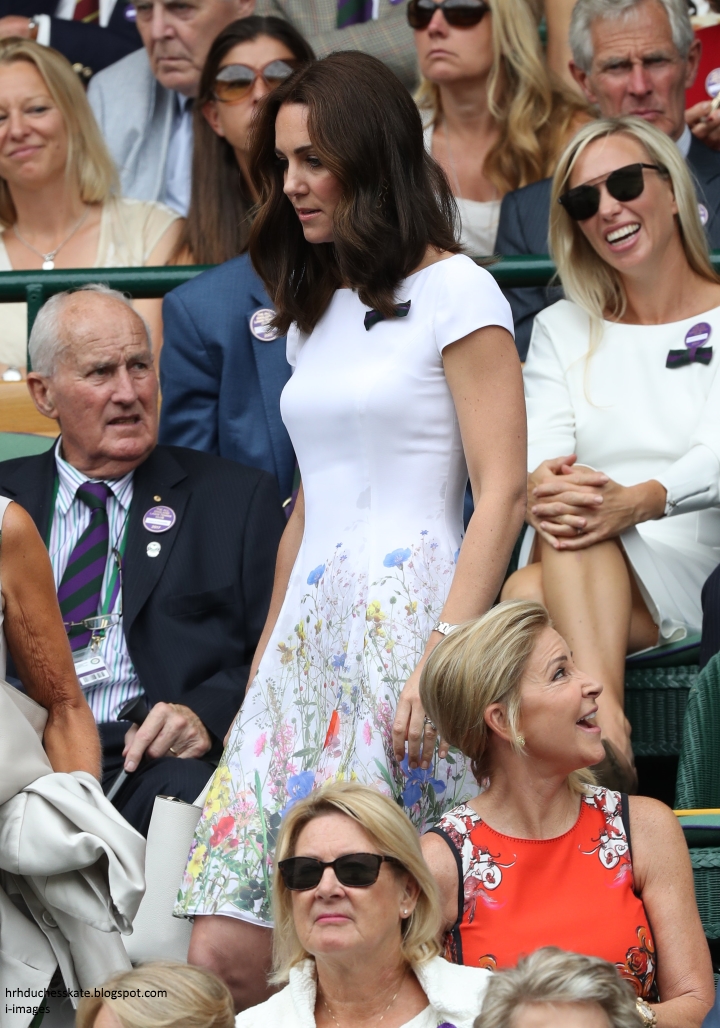 Today is a big day for the couple who are embarking on a tour of Poland and Germany with George and Charlotte tomorrow morning. I expect Kensington Palace is a hive of activity with last minute packing and preparations. William, Kate and Harry likely travelled black from Gloucestershire this morning where they headed the Highgrove guest list for Camilla's 70th birthday bash. The royals joined 250 guests for the black-tie affair. The Sunday Times article revealed more on guests present: "Camilla was joined by her son Tom, daughter Laura and sister Annabel as well as her former husband, Andrew Parker Bowles. Penny Junor, author of a new biography The Duchess: the Untold Story. Former King Constantine of Greece was also present." William and Harry also played in the Jerudong Trophy charity polo match in Gloucestershire yesterday, we had hoped to see Kate and the children as it's very much a family friendly event. 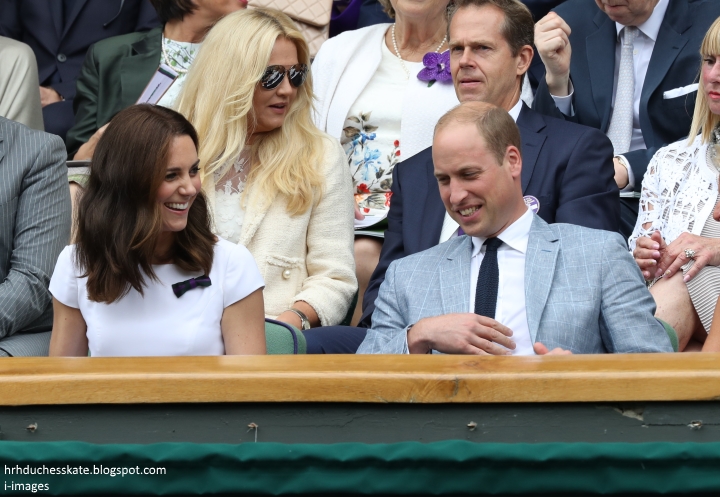 It is Kate's second appearance at the tournament as Royal Patron. The Duchess also visited on the first day of the championships. 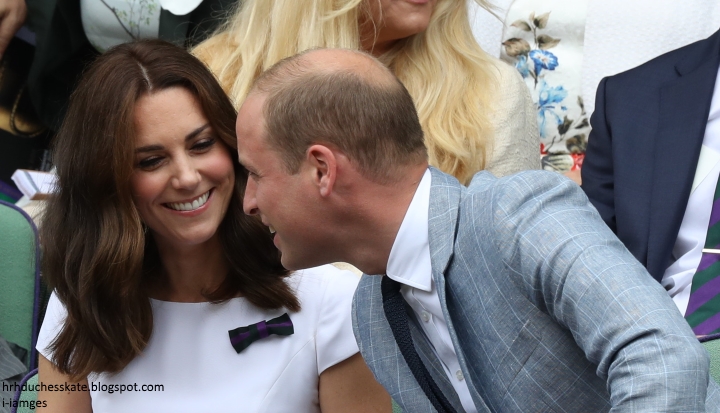 It's been a year of unexpected early exits at Wimbledon with three of the 'big four' male players; Andy Murray Rafael Nadal and Novak Djokovic losing before the Quarter Finals. To the delight of many tennis fans (including the Middleton ladies, especially Carole who Kate admitted has a little crush on the 'Prince of Tennis') Roger Federer is attempting to become the first man to win eight Wimbledon titles. The underdog in the final is Croatian player Marin Cilic who hopes to secure his first Wimbledon victory. 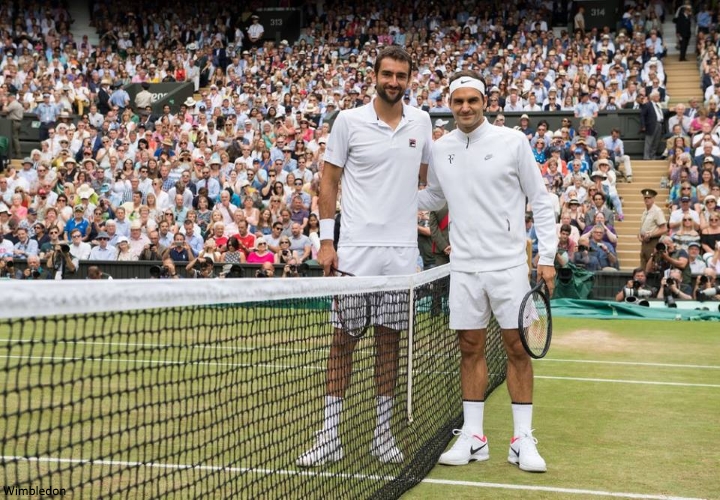 More from the BBC story:

'Federer had to wait five years to take his Grand Slam tally to 18 titles with his stunning Australian Open victory in January, and just six months later he is the favourite to make it 19. The oldest male finalist since the 39-year-old Ken Rosewall lost to Jimmy Connors in 1974, the fact that Federer is a month short of his 36th birthday has been irrelevant to his form on court.

It is 14 years since Federer won his first major title when he beat Australia's Mark Philippoussis on Centre Court, and five since he beat Andy Murray to win his last Wimbledon title. "I don't feel like [2012] is that long ago, to be honest," said the Swiss. 2003 feels like ages ago, because of the ponytail, the beard, whatever, you name it. This one is different. I kind of look the same as back in 2012, or at least I hope so."


Luca from Place2Be was delighted to do the coin toss. 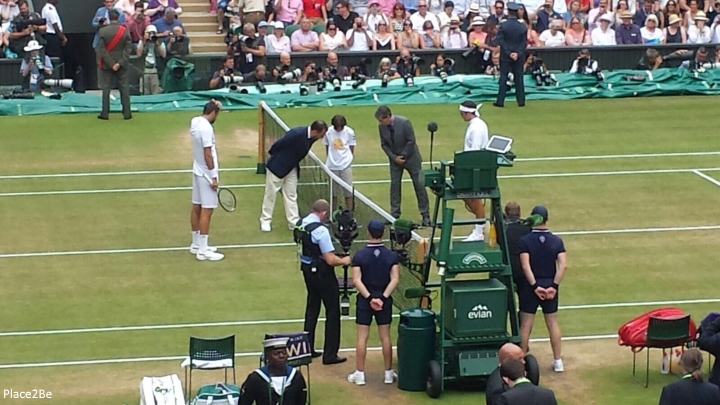 Speaking of the Middletons, Michael, Carole, James and Pippa were also there today. The Middleton family clearly adore the tournament and have attended several days this year. 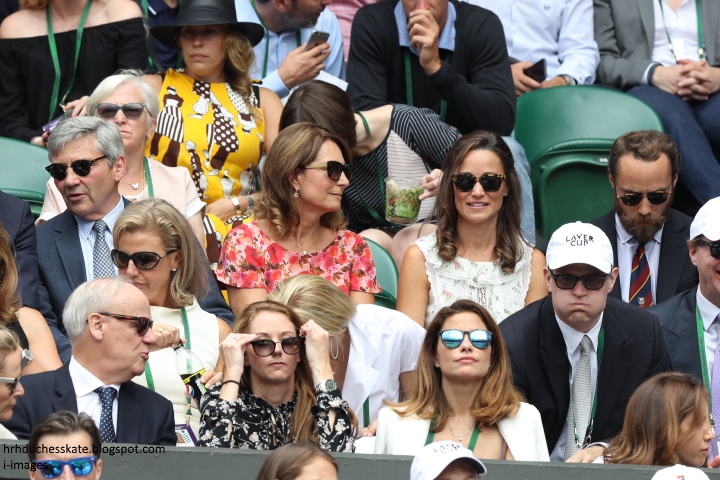 The Duke and Duchess in the Royal Box. 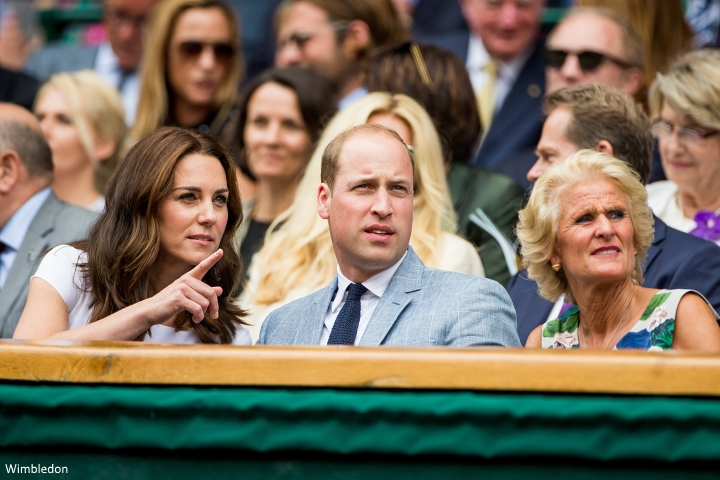 William and Kate sat beside AELTC chairman Philip Brook and his wife Gillian. 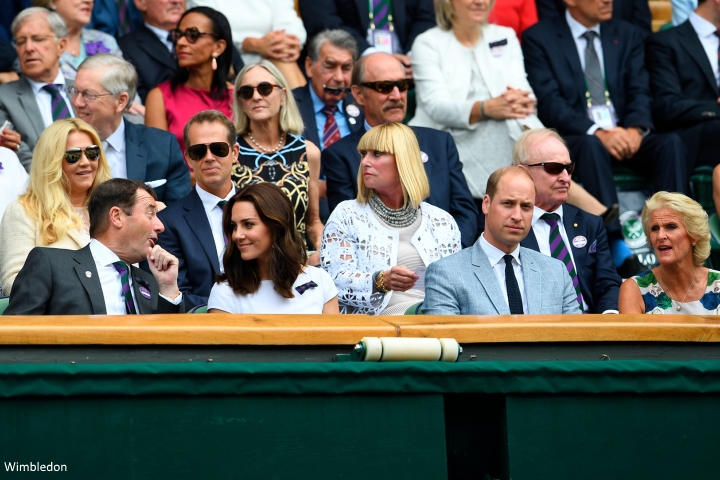 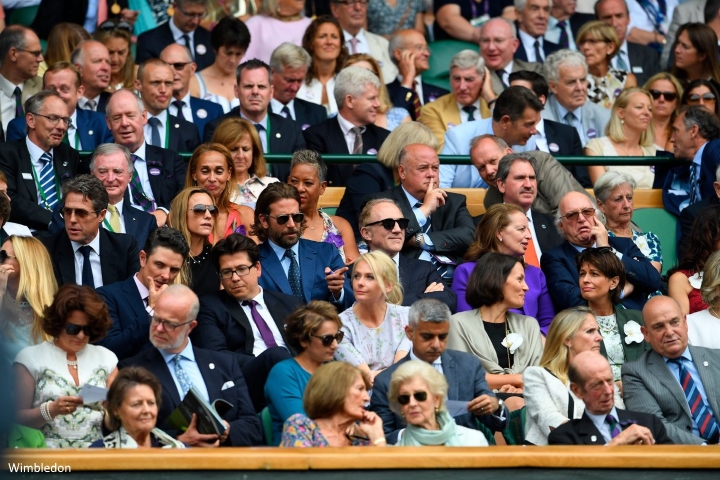 William and Kate enjoying the action.

The couple enjoyed a laugh.

The Royal Spectator posted this cute screen grab of William rummaging through his Wimbledon goody bag :) 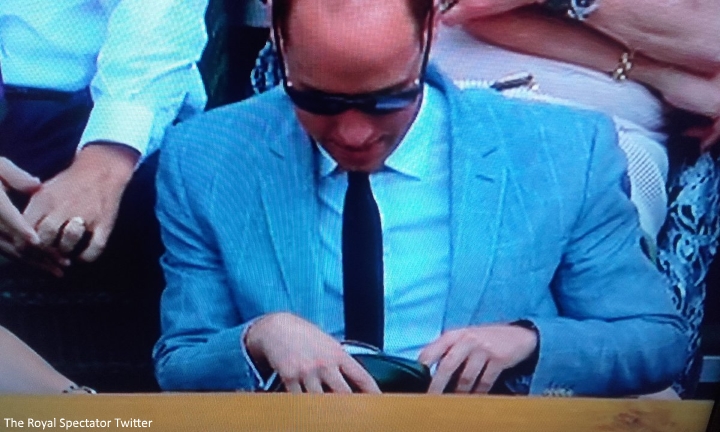 The crowd rose to their feet as Roger Federer won in three straight sets. 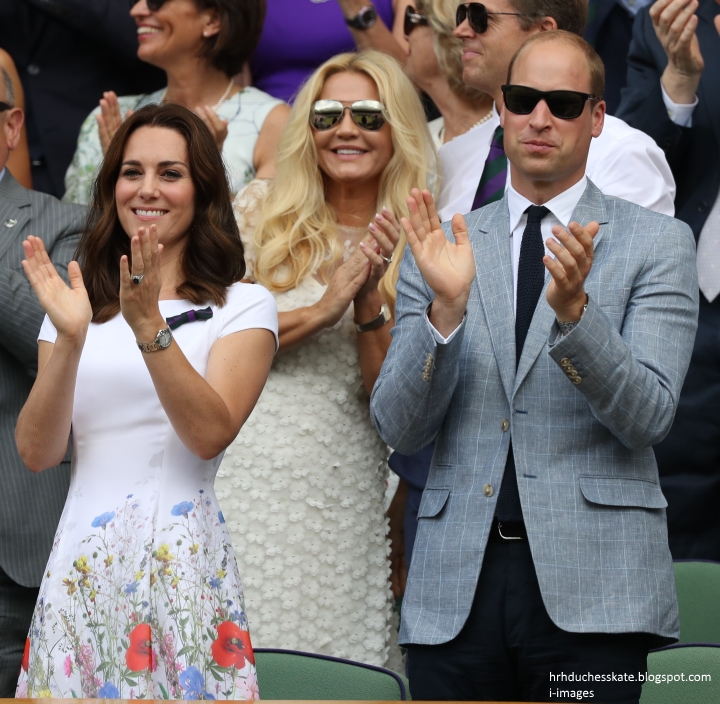 A historic day in his career as he became the first man to win Wimbledon eight times. 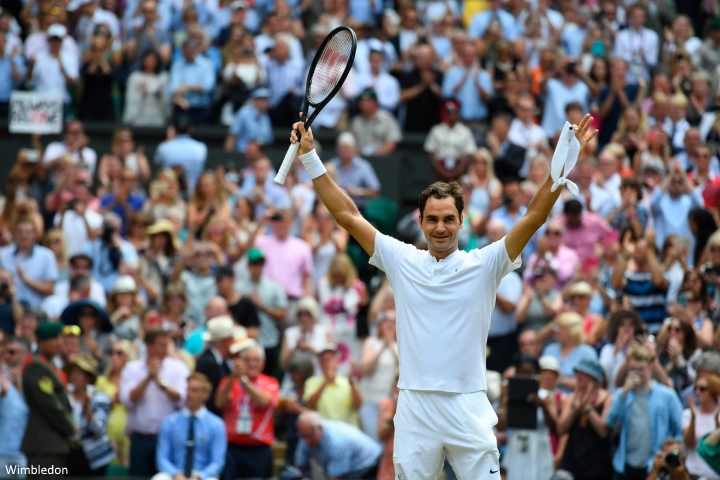 An emotional Roger couldn't fight back the tears.

The video below shows William and Kate congratulating Roger.

Hugs, kisses and handshakes from royalty and the family for the #Wimbledon champion... pic.twitter.com/wxpTxn8w6i
— Wimbledon (@Wimbledon) July 16, 2017 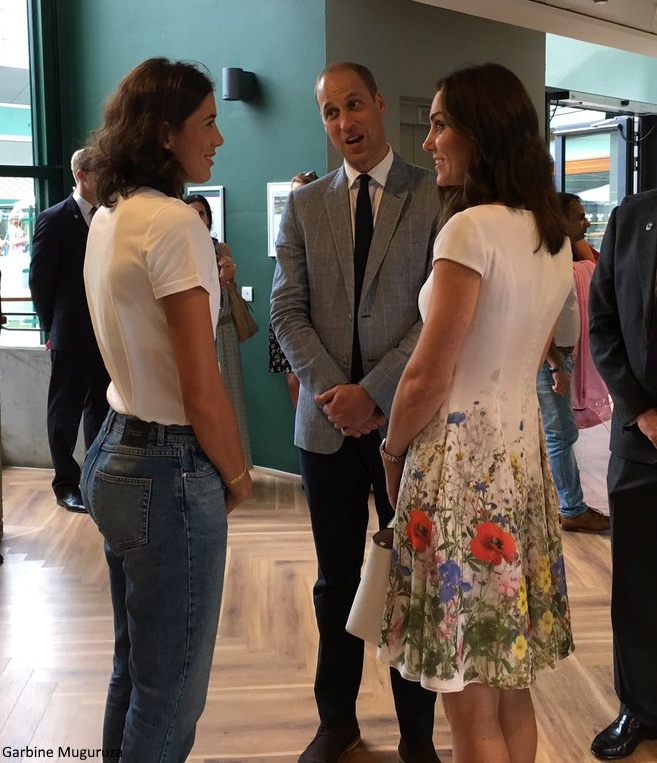 Kate looked lovely in a gorgeous white dress with a gorgeous floral print. I think Wimbledon often gives us an insight into Kate's personal style as opposed to her "official wardrobe". It's a beautifully fitted garment with short sleeves and a fuller skirt. 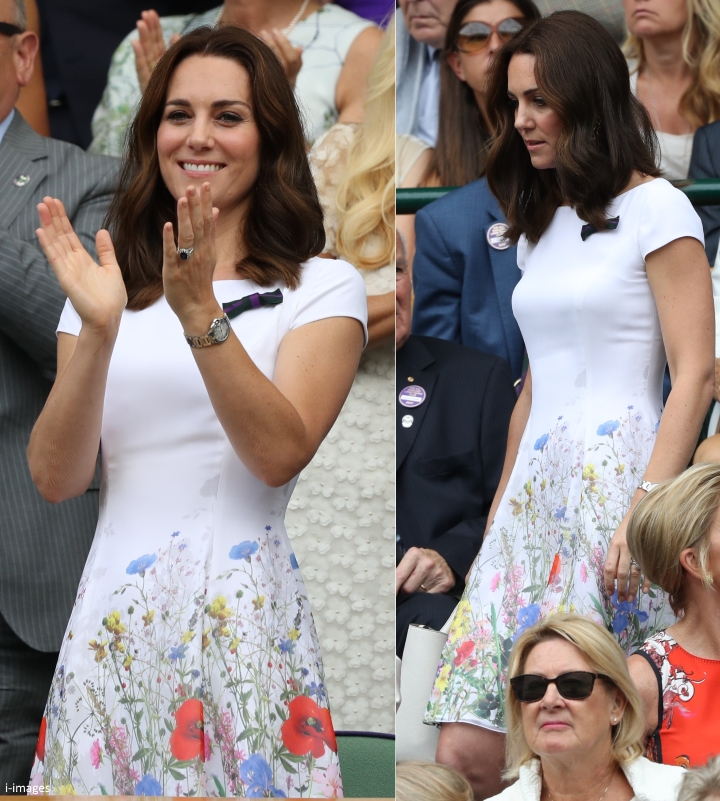 Following hours of fruitless searches, the talented Lauren & reader eclaires discovered the dress is actually by Catherine Walker (with thanks to the lovely What Kate Wore for tweeting the news). The brand posted this photo on their Instagram page in May 2016. It appears to be from a photoshoot associated with Chelsea in Bloom 2016. 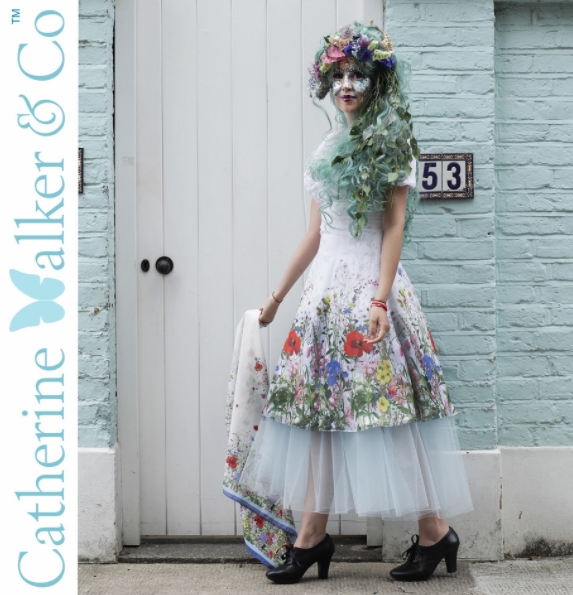 A closer look at the floral print. 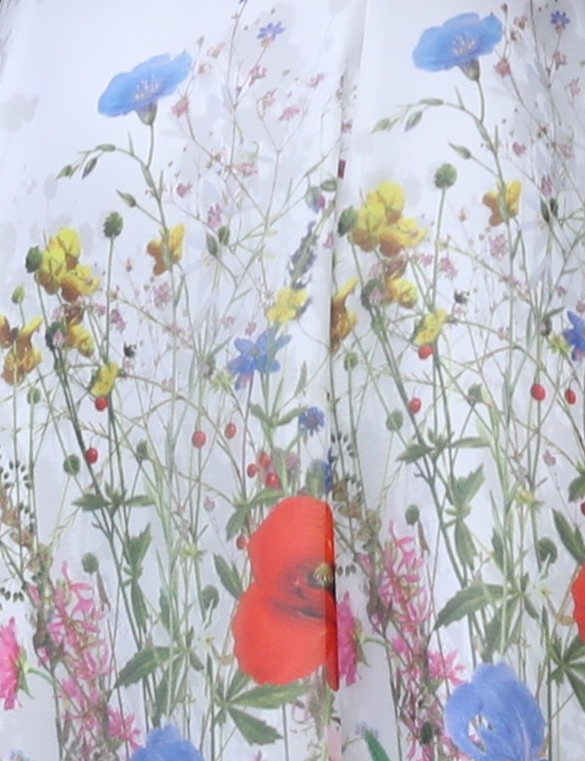 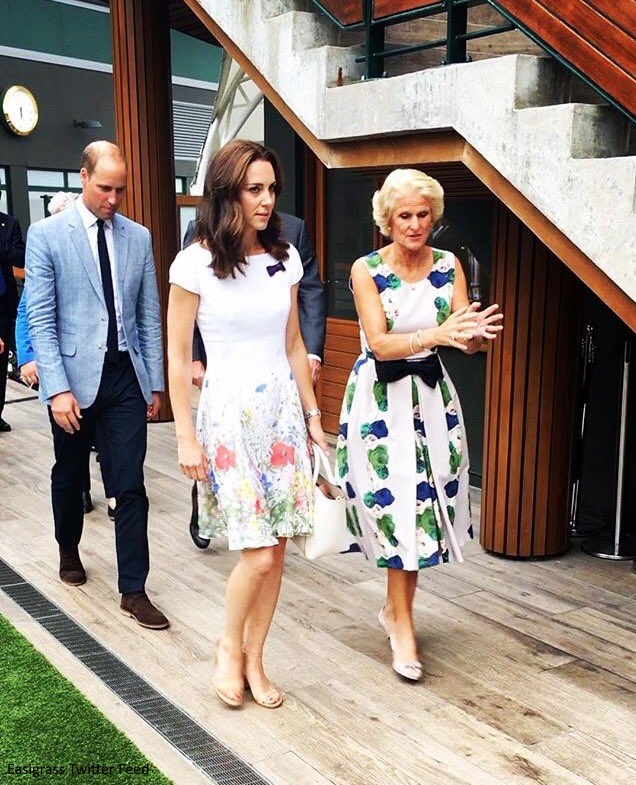 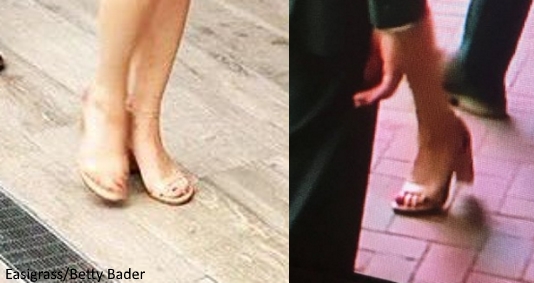 Jen and several others suggested the Stuart Weitzman Nearly Nude Ankle Strap Sandals as a possible ID. Unfortunately due to the lack of high-res photos thus far, it's difficult to be certain, however they certainly do seem to match. The sandals feature a slim ankle strap, a chunky block heel and a tiny golden buckle. They are available in several colours at Nordstrom.


Kate accessorised with her Cassandra Goad Temple of Heaven earrings.


And her Cartier Ballon Bleu watch.

The tote is fast becoming known as Kate's 'Wimbledon bag', it's been seen publicly three times at the tournament now.


Kate's sunglasses are the Bulgari Women's BV8170 Sunglasses, they retail at Amazon for $169.


I thought Kate's hair looked great today - very natural and wavy. As you can see Kate wore a purple and green bow, Gert noted they are worn by female members of the All England Club, male members have a tie. 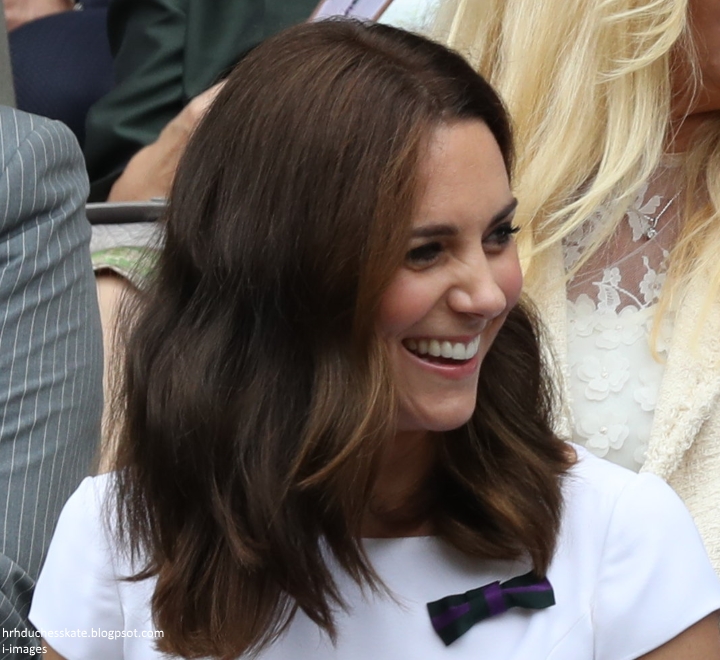 And with that, we will see you tomorrow when the royal tour of Germany and Poland begins. The Cambridges are set to arrive in Warsaw at midday. The Royal Tour Clock is live on the sidebar and the itinerary for the tour can be viewed here. A reminder of events scheduled for day one of the tour: