The Cambridges Join the Queen at Windsor Castle for Easter Service

The Duke and Duchess of Cambridge joined the Queen and members of the Royal family for Easter Service at St George's Chapel at Windsor Castle. 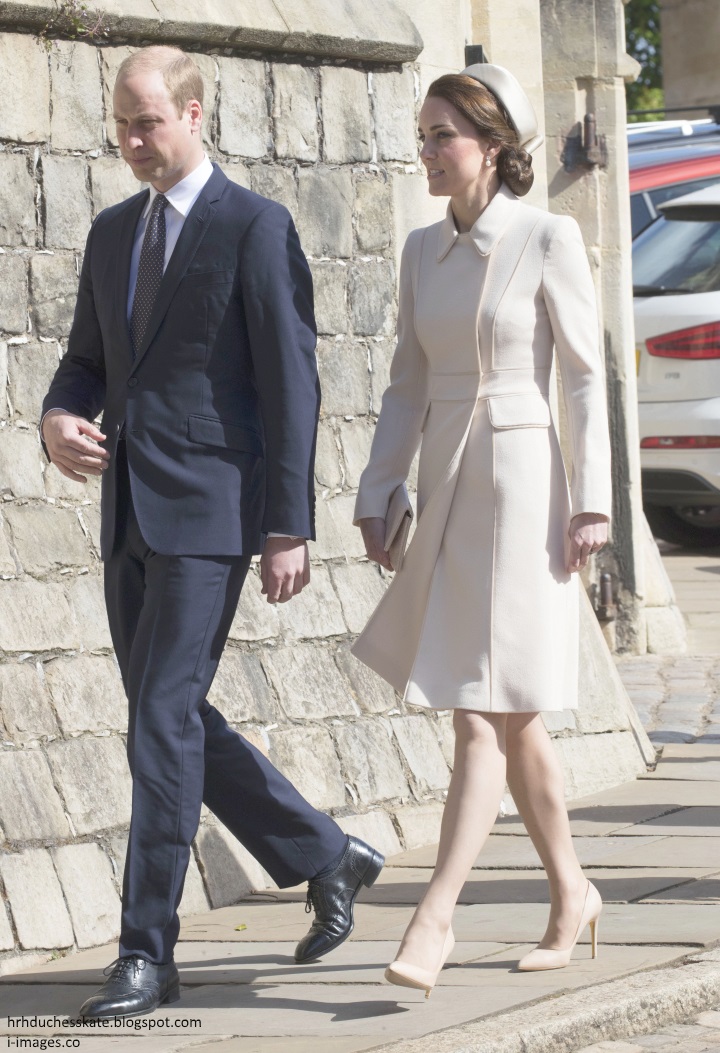 In our last post, we discussed how the Cambridges have spent every Easter since their engagement. In 2012 they joined Prince Charles and the Duchess of Cornwall at Balmoral - attending a church service at Crathie Kirk. In 2013, they spent it in Anglesey, where William was working as a search and rescue pilot, and in 2014 William and Kate were in Australia with Prince George. Aside from those occasions, they have enjoyed the day privately with the Middletons in Bucklebury. I would say it's quite significant they joined the Queen today and with a move to London on the cards later this summer, it may signal a new tradition where they alternate between both families. 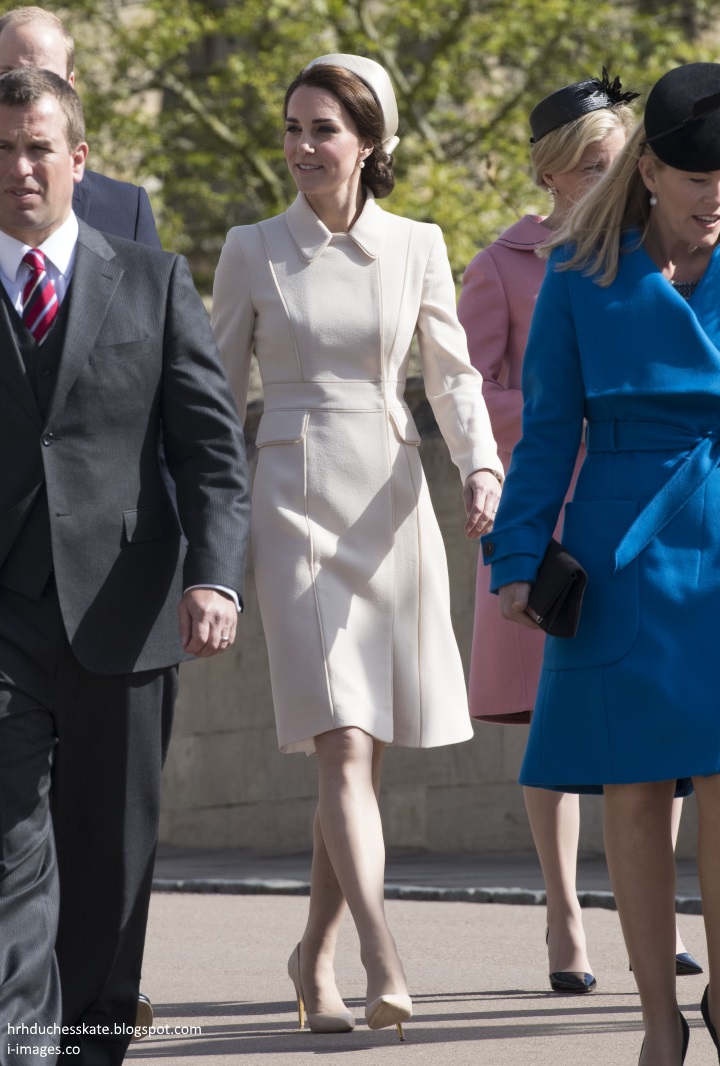 'In a sign of the second in line to the throne and his wife stepping up to the plate as they prepare to become full time working members of the family, William and Kate went to St George's Chapel at Windsor Castle.'


The Duke and Duchess made the way down the hill for the service. 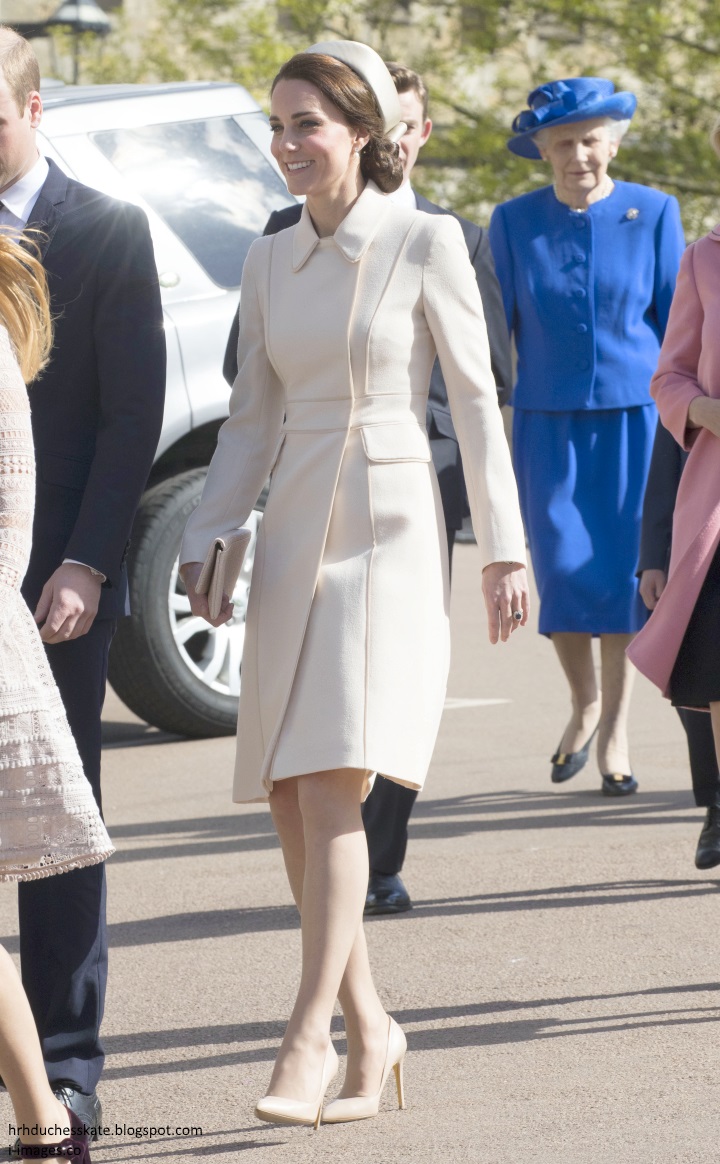 Other members of the Royal family present included The Duke of Edinburgh, Princess Anne and her husband Vice Admiral Sir Timothy Laurence, Peter Philips and his wife Autumn, the Wessexes and the Yorks. 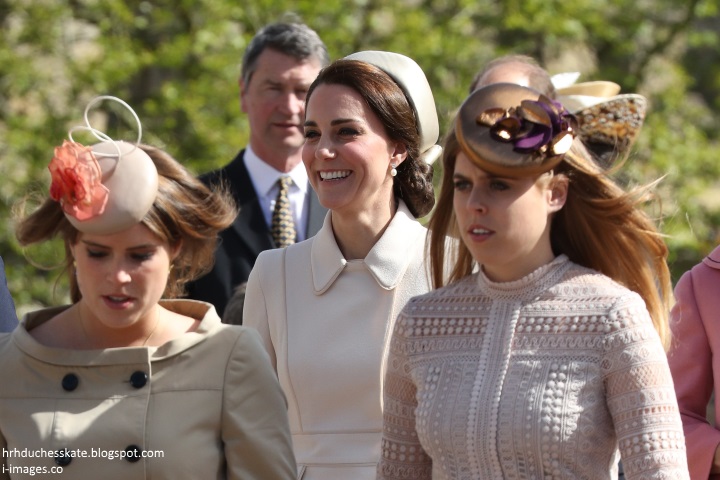 A lovely photo of the royal ladies making a stylish entrance (with a guest appearance from William and Edward if you look closely). 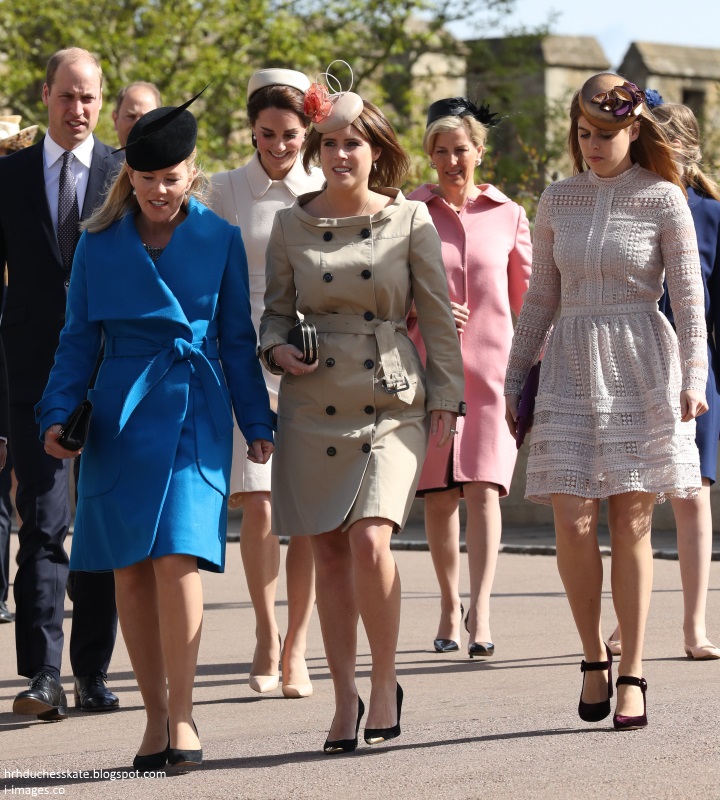 Well-wishers waited outside for the royals to arrive and clapped as the Queen entered the church through the Galilee Porch. 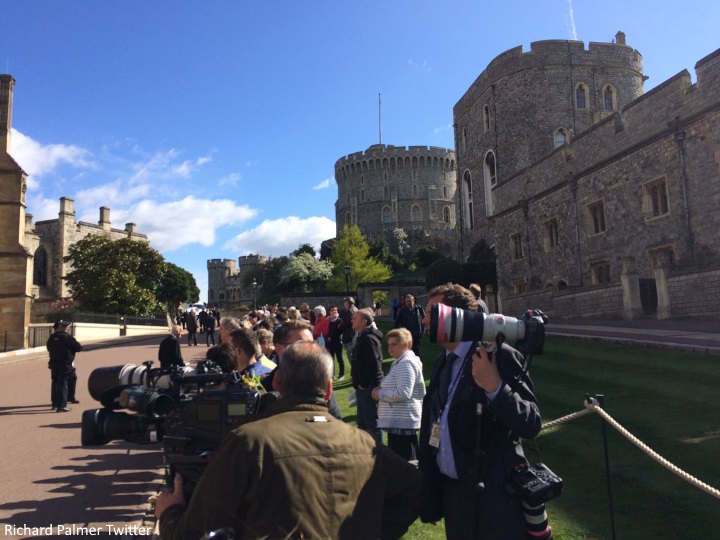 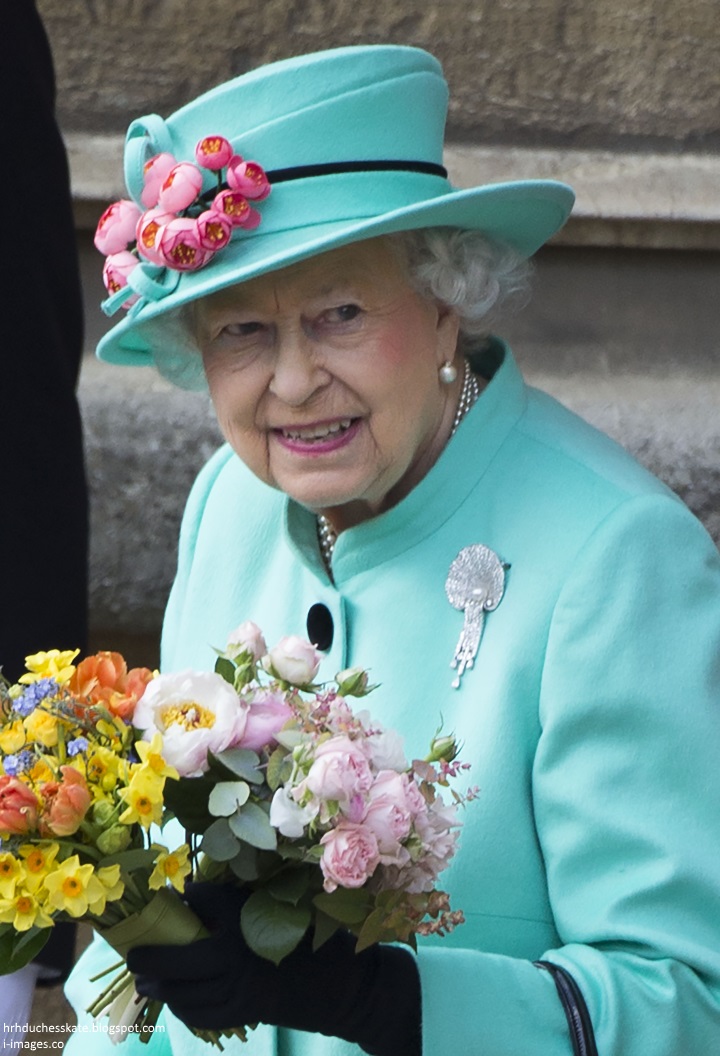 The Duchess curtsied as the Queen made her way inside. Majesty Magazine's royal editor Joe Little told People: "It is rare, but it indicates that this was the first time that the Duchess saw the Queen. It would normally happen in private. It’s unusual to see it in public but not unique. That would have been the first communication between them on that day."

St George's Chapel, a 14th century building located in the Lower Ward of the castle. The chapel has been the site of many royal weddings in recent years, with the Earl and Countess of Wessex's in 1999, and the Prince of Wales and Duchess of Cornwall receiving a blessing there after their wedding in 2005. The chapel is also home to the Order of the Garter, the annual June ceremony. 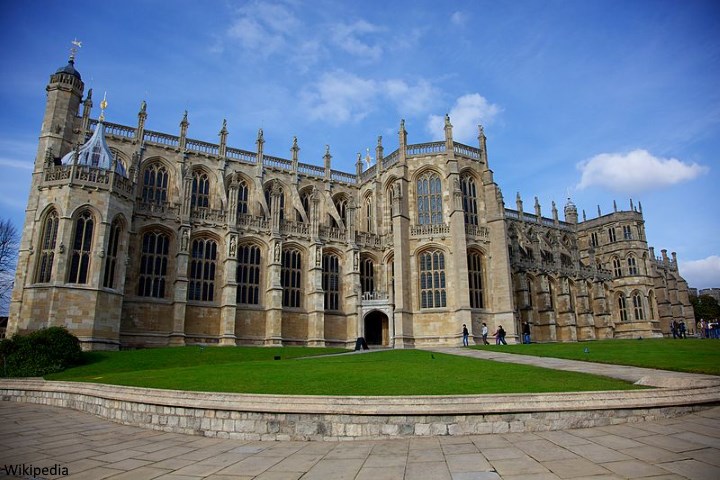 More on the history of the chapel:

'In 1348, King Edward III founded two new religious colleges: St Stephen's at Westminster and St George's at Windsor. The new college at Windsor was attached to the Chapel of St Edward the Confessor which had been constructed by Henry III in the early thirteenth century. The chapel was then rededicated to the Blessed Virgin Mary, St Edward the Confessor and St George the Martyr. Edward III also built the Aerary Porch in 1353–1354. It was used as the entrance to the new college.

The Quire of St George's Chapel, by Charles Wild, from W.H. Pyne's Royal Residences, 1818. St George's Chapel became the Mother Church of the Order of the Garter, and a special service is still held in the chapel every June and is attended by the members of the order. Their heraldic banners hang above the upper stalls of the choir where they have a seat for life.'


St George's Chapel in 1848 by Joseph Nash from the Royal Collection Trust. 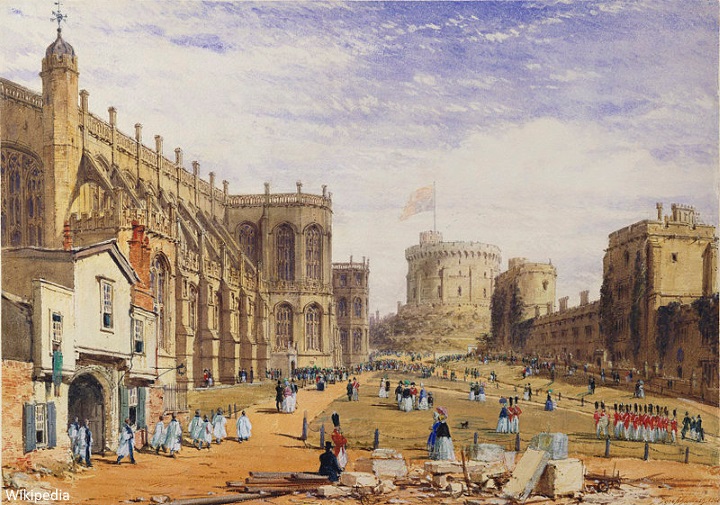 The Duke and Duchess leaving the service. It was wonderful to see them joining the Queen today! 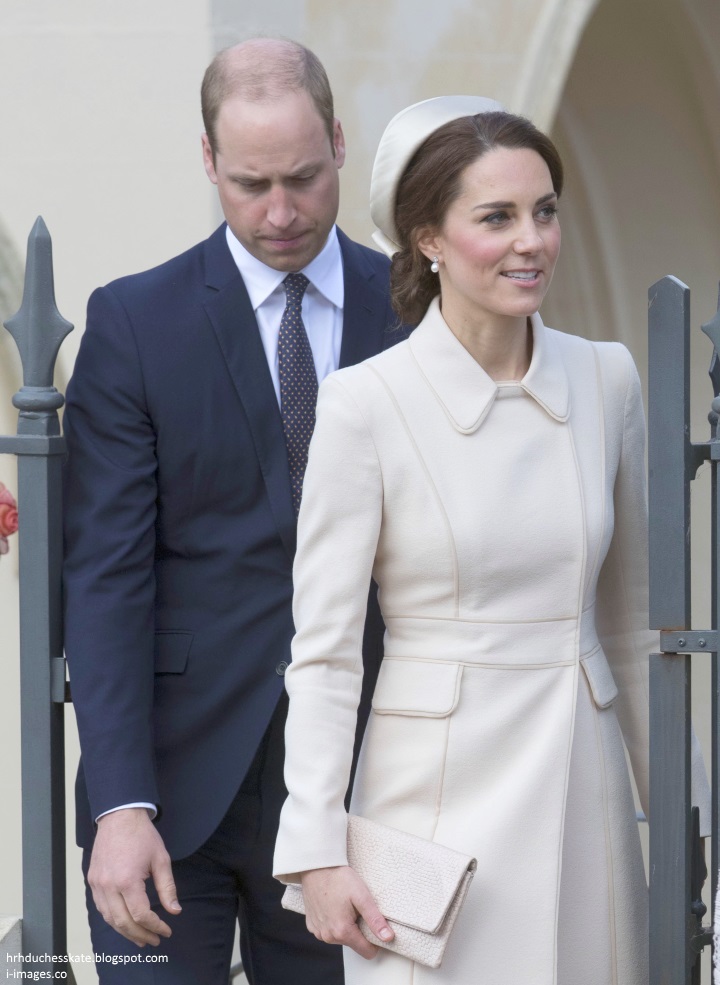 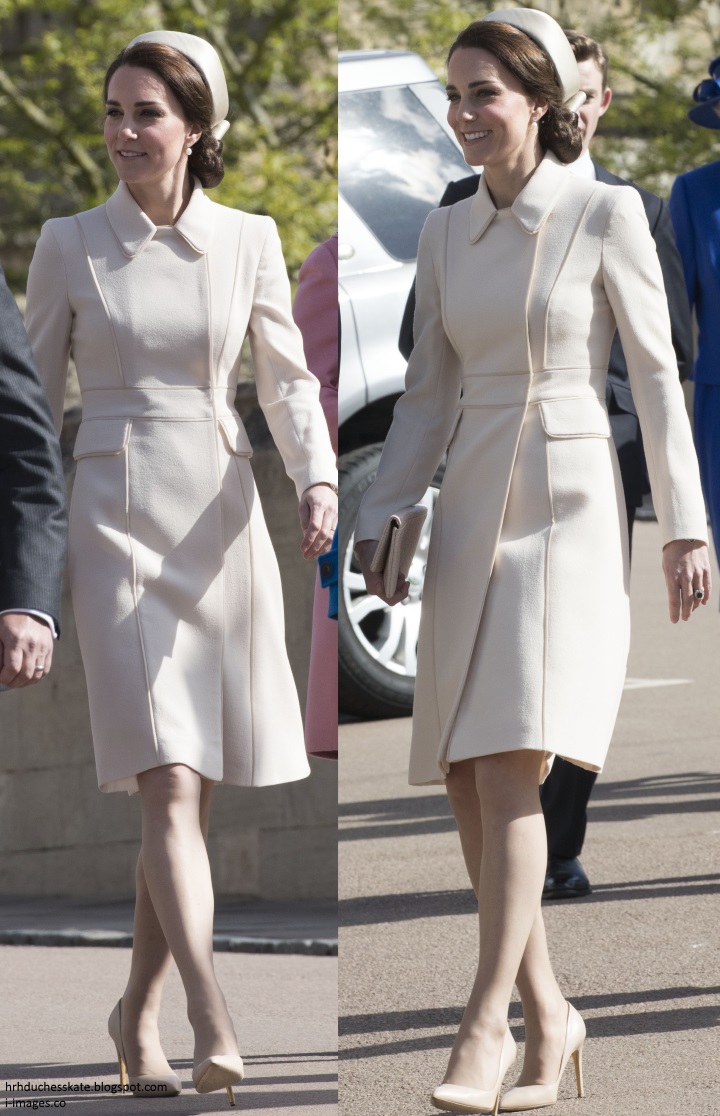 The Duchess first publicly wore it when the Cambridges left Canada in September completing their week-long tour. The elegant piece features a princess silhouette and front flap pockets. 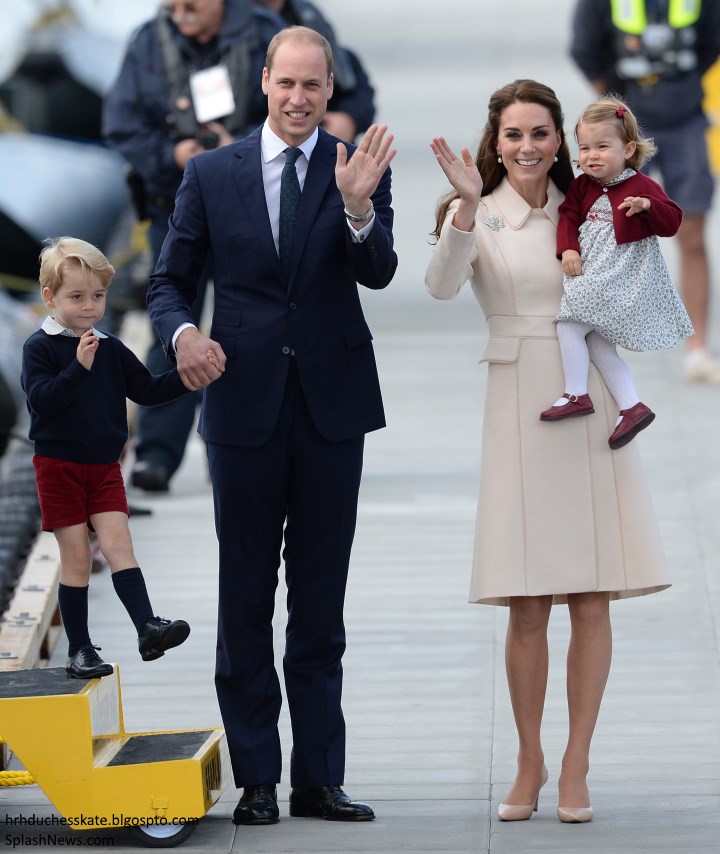 Kate teamed the coat with a new cream pillbox hat with a signature bow and an updo. 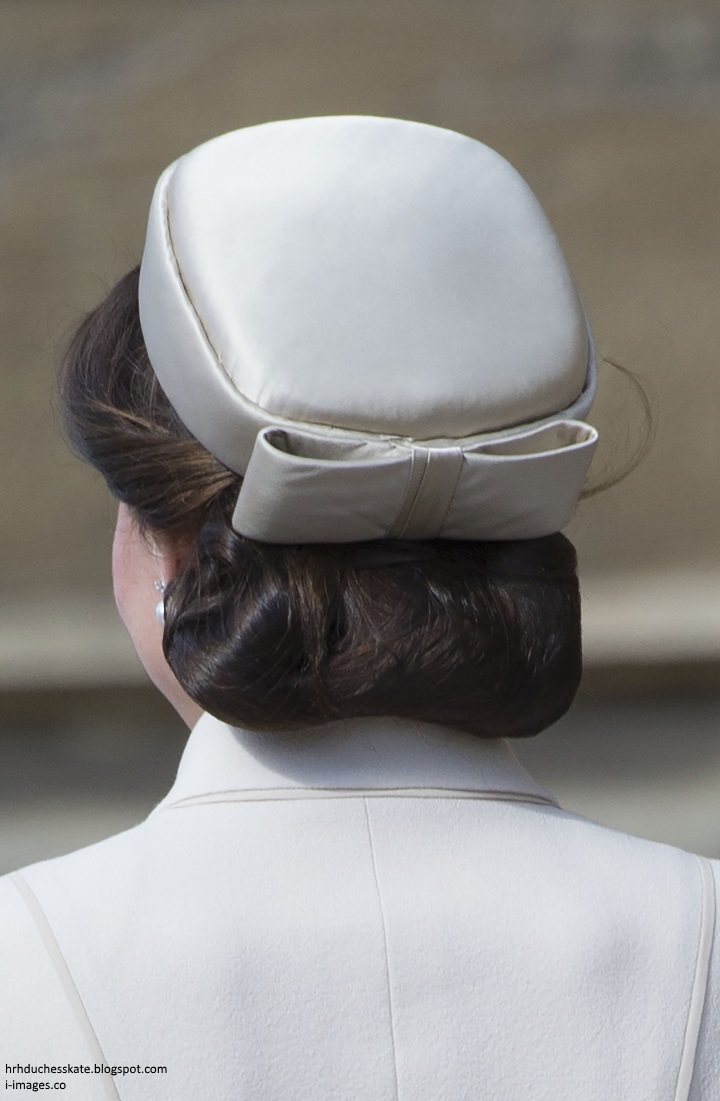 Kate accessorised with Her Majesty's diamond and pearl earrings. 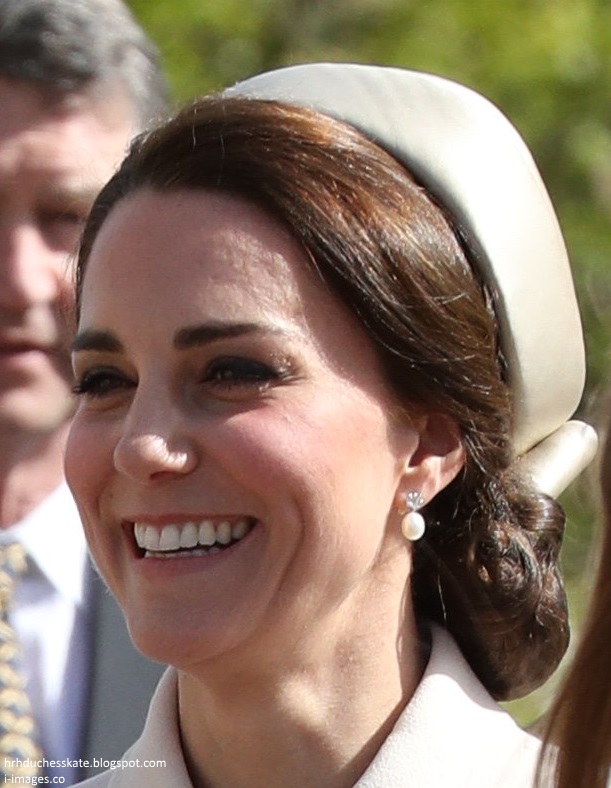 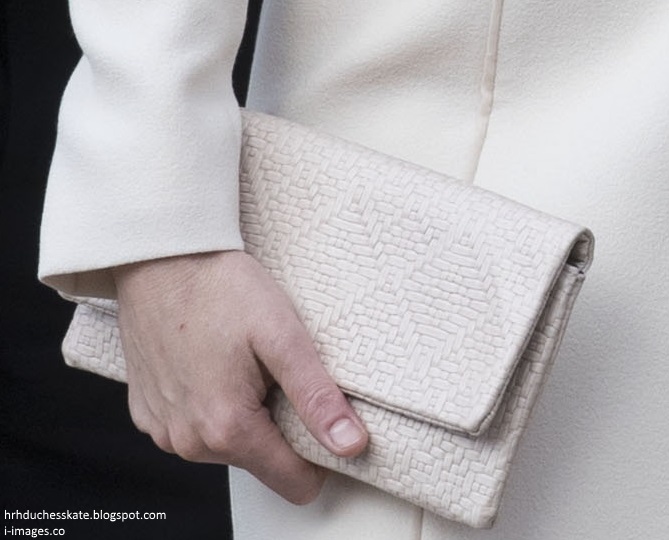 With thanks to the amazing Anna, it's by Polish based brand Etui Bags. The affordable brand has been stocked in a selection of high street stores including Topshop and John Lewis. A very similar textured woven clutch in orange remains available.


It looks like Kate completed the look with her Rupert Sanderson Malory pumps in nude patent. (With thanks to Guilia and Middleton Maven). 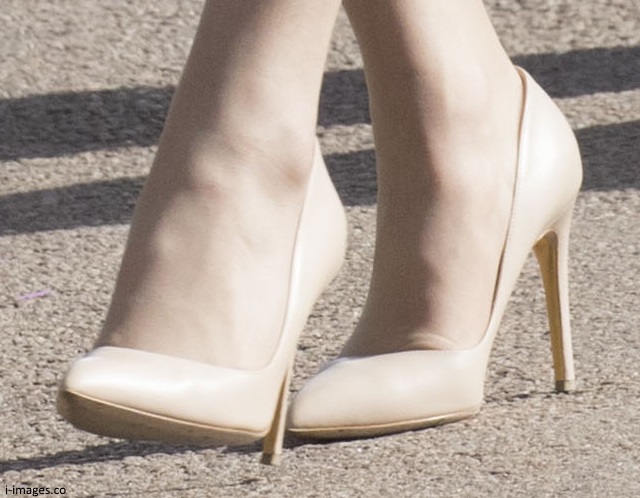