The Duke and Duchess of Cambridge visited the American Embassy in central London earlier today to sign a book of condolences for the victims of the Orlando nightclub massacre. A source told the Mail Online: "The Queen immediately issued a statement on Sunday and spoke to the president to offer the nation’s condolences. But with such a disproportionate number of young people affected by the worst mass shooting in US history the Duke and Duchess were very keen to be able to offer the condolences of their own generation too. Prince Harry was unable to join them but he has been speaking at length to people out in Orlando privately because he spent a significant amount of time out there recently for the Invictus Games. All of them have been affected deeply by the stories they have read and heard." Prince William wrote: "With our deepest condolences and with our thoughts and prayers to all those affected." 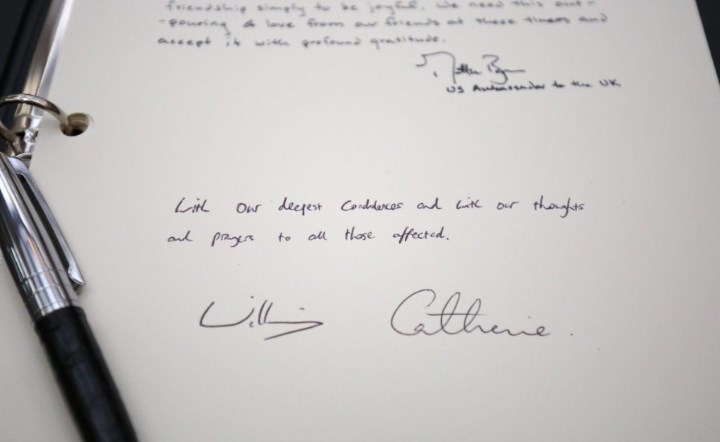 The couple signed the book in front of a flag given to Hillary Clinton by global LGBT rights organisation, The Kaleidoscope Trust, following the presidential hopeful's first speech on gay rights. After signing the book, the Duke and Duchess spoke to representatives from the US embassy's LGBT network GLIFAA. 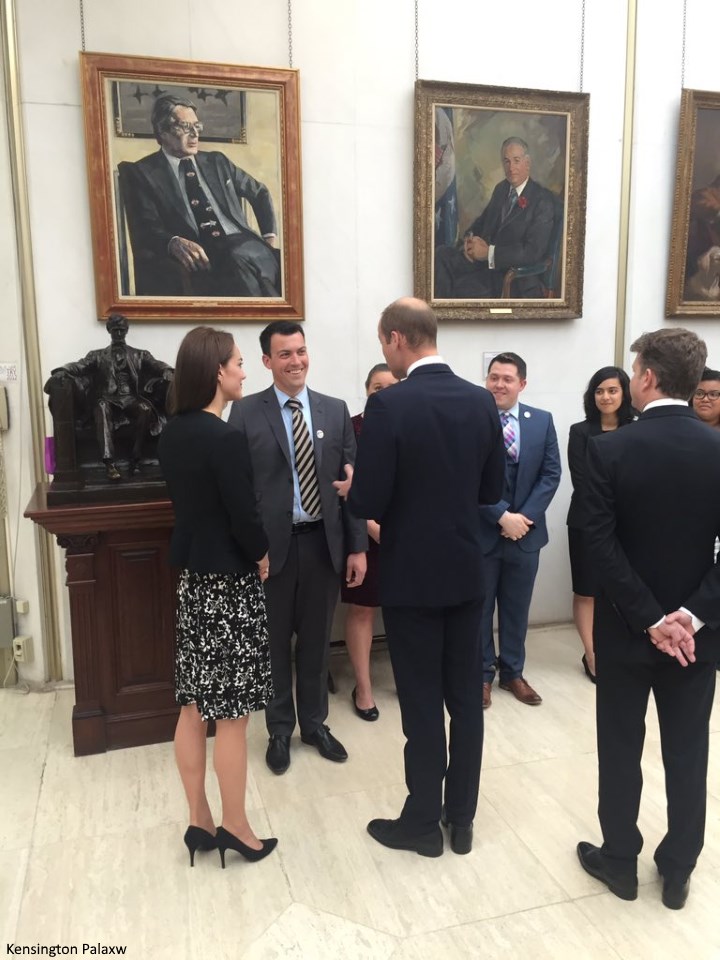 'Dozens of embassy workers, all wearing custom-made badges with a combination of the American, British and Pride flags, filled the lobby for the royal visit.'


The Duke and Duchess met staff at the embassy and were shown a model of the new US embassy building which will be based at Nine Elms, London. Whilst chatting with staff, Prince William revealed he will appear in gay lifestyle magazine Attitude. More from The Telegraph:

'Craig Petty, president of LGBT association Glifaa, said the Duke told him he would be appearing in the magazine. I told him what I do and he said he's going to be in Attitude magazine," he added. "I was really nervous about meeting the royal couple, but they are both great at putting you at ease. I think it's great that they have come here today to show their support.

The news has been welcomed by members of the LGBT community as a "great endorsement" for diversity. A spokesman for the LGBT Foundation said: "What it shows is why it's important - because there has not been that many times when the LGBT community has been mentioned or highlighted by the royal family - with it being a younger heir to the throne who is understanding of diverse communities.The fact that he has agreed to be in Attitude and signing books of condolences for the Orlando massacre, shows the importance of reaching out to the LGBT community.'


The tragic news from Orlando has been both shocking and heartbreaking - 49 people lost their lives in the city in the early hours of Sunday morning. It's one of a number of horrific attacks we've seen taking place from Paris to San Bernardino. Several news outlets shared photos of the victims - it's simply horrific so many people lost their lives and so many families are without their loved ones. I know we all join William and Kate in expressing our condolences.  For those who wish to leave a message of condolence you can do so here. 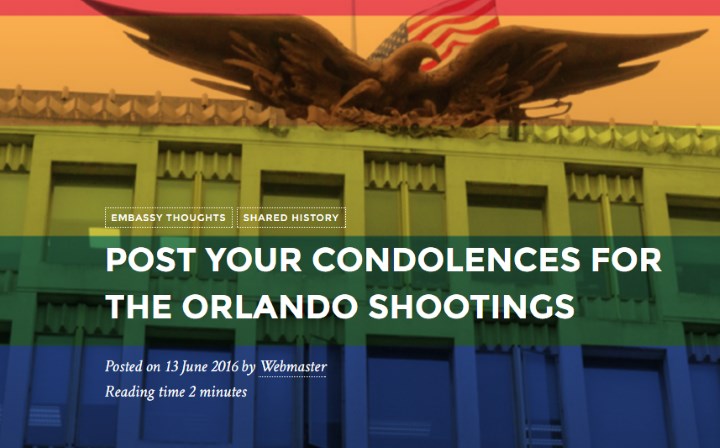 Our eagle-eyed reader Lisa identified Kate's new dress as the Tory Burch Sophia Print A-Line Dress. The dress features a leafy monochrome print, short sleeves and a pleat-flared skirt. I thought it very appropriate to choose an American designer and the look was perfect for the nature of the occasion.


The dress was teamed with Kate's Ralph Lauren jacket. She's worn it several times, most notably the day after the royal wedding. 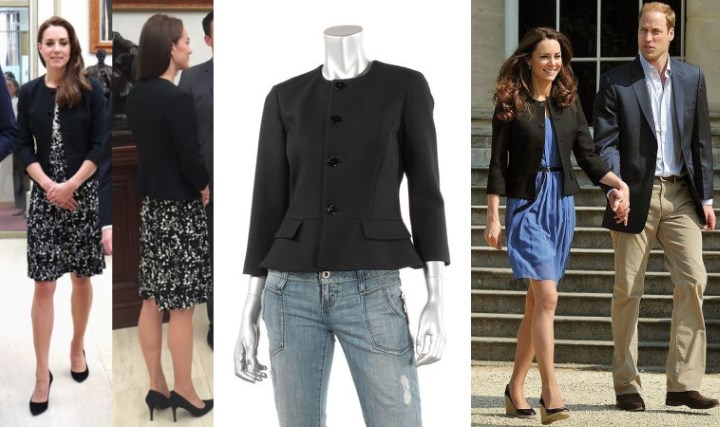 In the afternoon, Baron and Baroness Carrickfergus (as William and Kate are styled in Northern Ireland), attended the Secretary of State for Northern Ireland's Garden Party at Hillsborough Castle 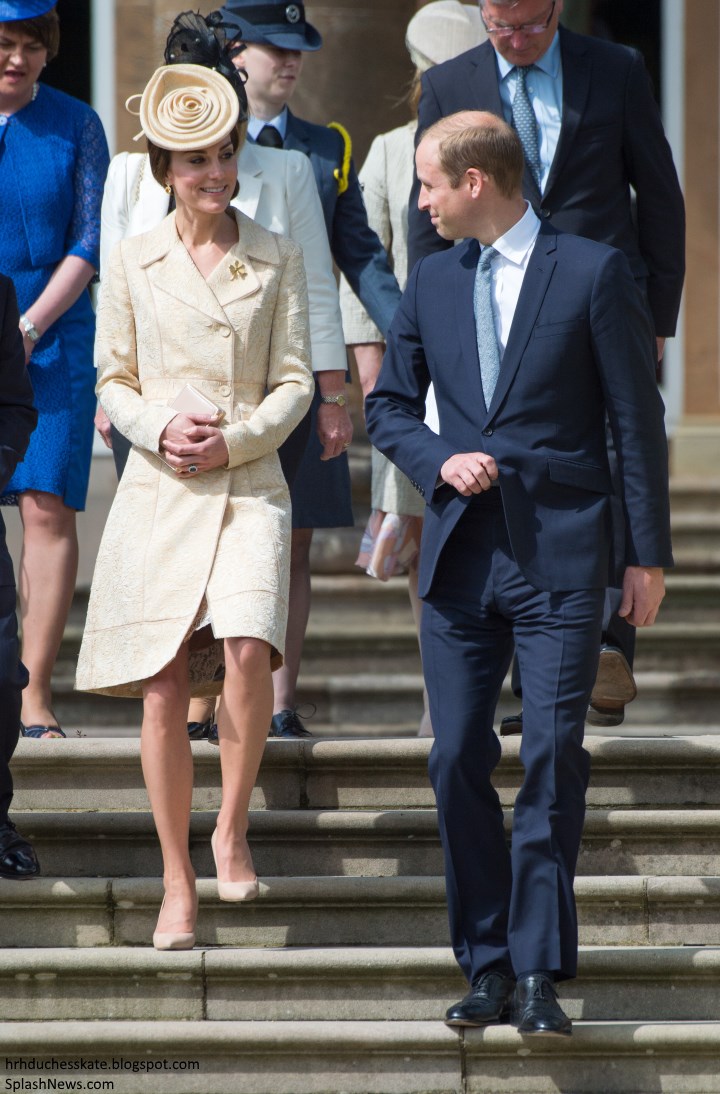 .
Secretary of State for Northern Ireland Theresa Villiers hosted the garden party. She's the lady in yellow beside William. 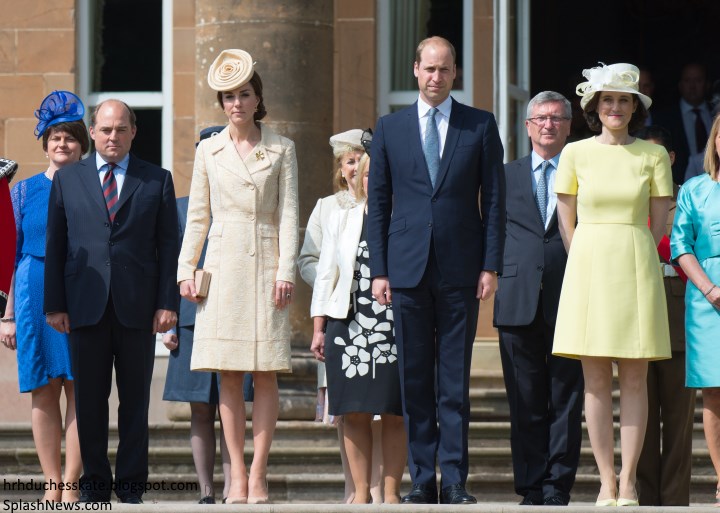 News of William and Kate's attendance was kept very much under wraps with an embargo until last night due to security reasons. 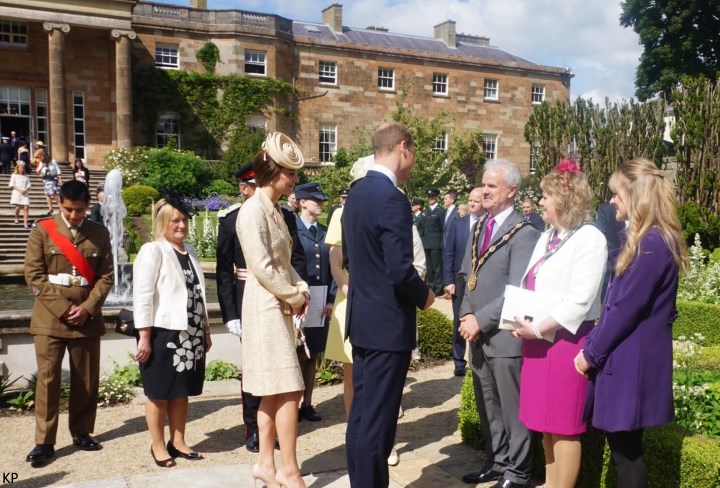 Interestingly, and to the surprise of many, it is William and Kate's first visit to Northern Ireland since the royal wedding. They memorably visited Belfast in 2011 on Shrove Tuesday and enjoyed flipping pancakes and meeting locals. The Duchess was beaming in a Burberry trench with just weeks to go until the wedding. 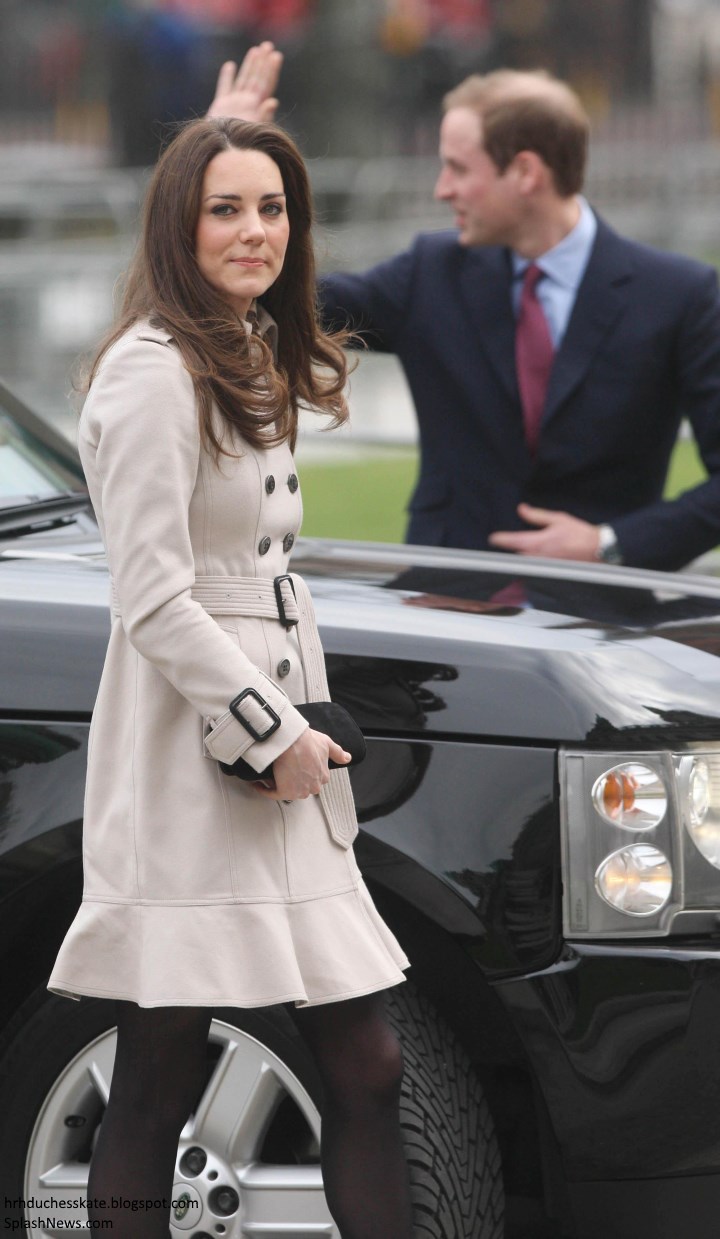 The Secretary of State for Northern Ireland has hosted this event annually since 1984. Around 2,500 guests are invited each year. Guests are drawn from a wide cross-section of Northern Irish society, including the voluntary and community sectors, local charities, youth organisations and wider civil society. With the exception of two events, these have always been held at Hillsborough Castle. 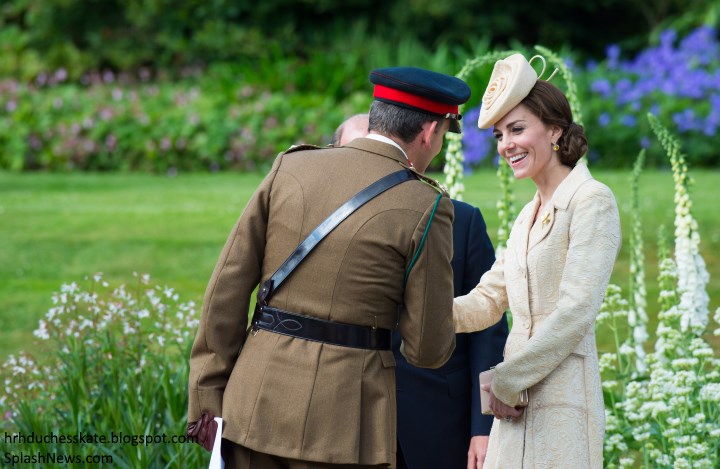 Guests were eager to meet the royals. 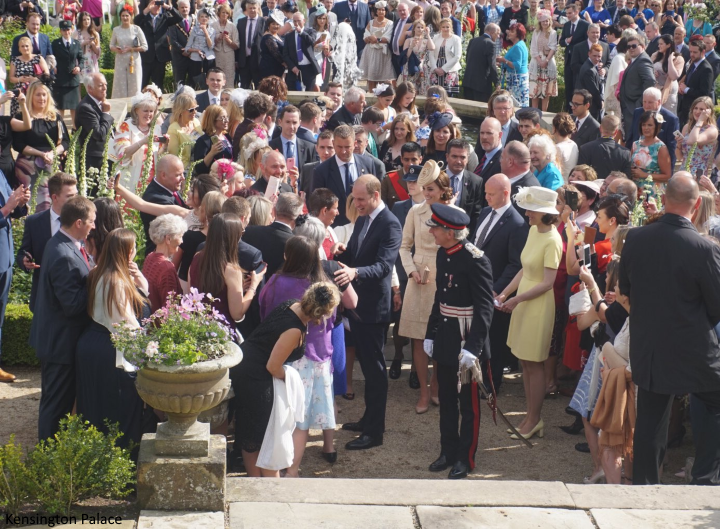 A royal guest of honour attends each year and in recent years this event has been attended by the Duke of York in 2012, the Earl of Wessex in 2013, HM the Queen and the Duke of Edinburgh during their visit to Northern Ireland in 2014, and last year by the Earl and Countess of Wessex. 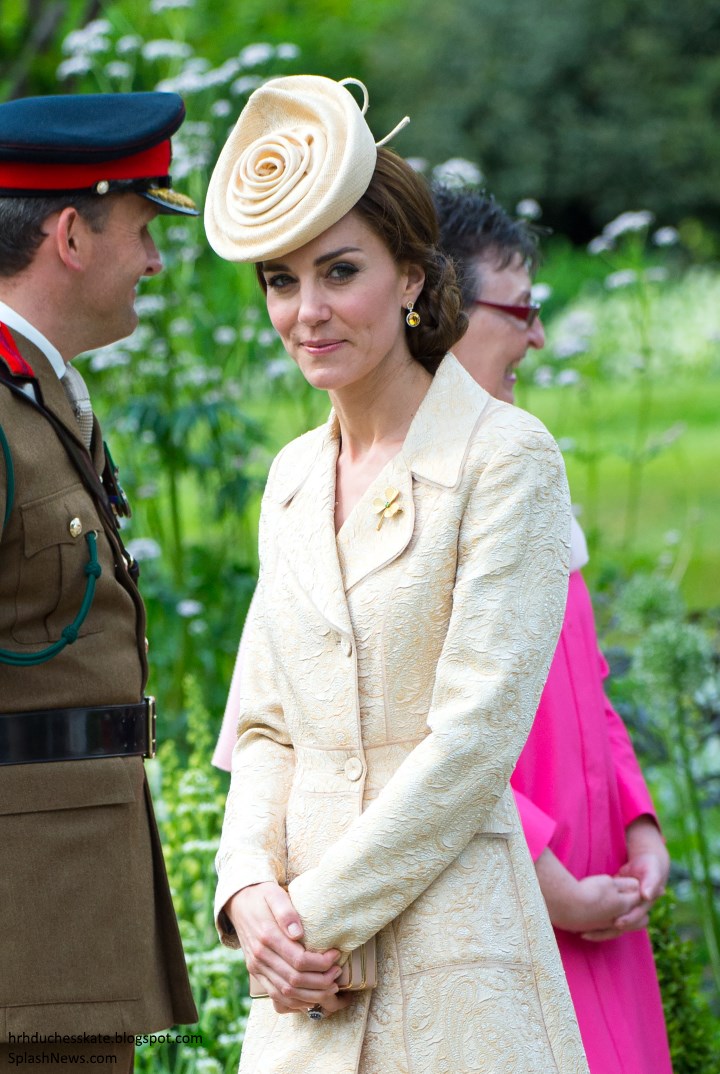 William and Kate planted a tree. 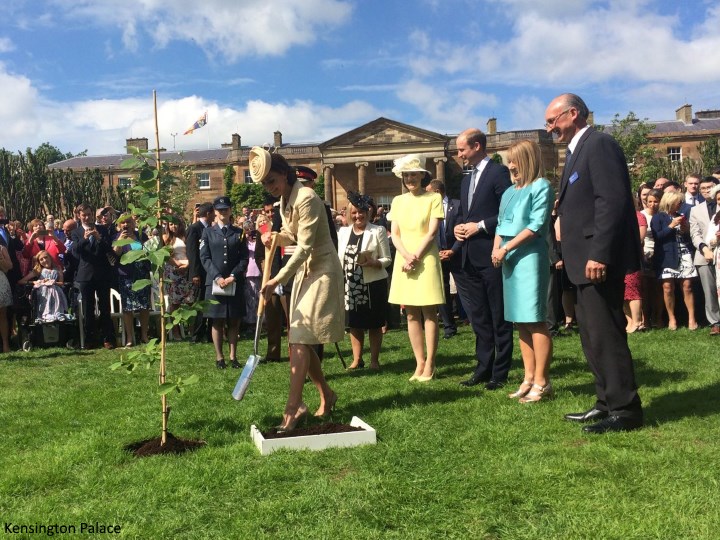 Hillsborough Castle in County Down is the official residence of the Royal family when they are in Northern Ireland and the home of the Secretary of State since the 1970s. The Georgian mansion was built in the 18th century for the Hill family, the Marquesses of Downshire, and was later remodelled in the 19th and 20th centuries. In 2014, the Prince of Wales held an investiture at Hillsborough Castle, the first one to be held in Northern Ireland since the building became a royal palace. 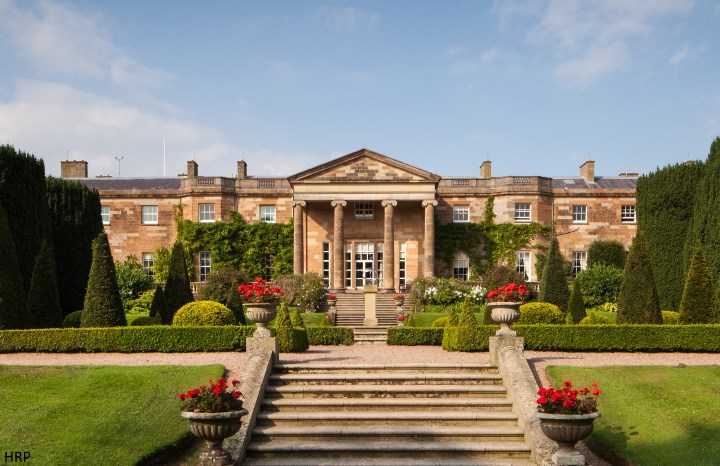 'The modern royal history of Hillsborough begins in the 1920s, when it became the de facto royal residence in Northern Ireland. Leading members of the Royal family have regularly visited Northern Ireland since 1922, using Hillsborough as their ceremonial and personal base. Significantly, the first meeting between HM the Queen and Mary McAleese, then President of Ireland, occurred at Hillsborough in 2009. In 2011 the Queen led the first state visit to the Republic of Ireland.'


A look at one of the dining rooms. The interior decor is exquisite.

Hillsborough has welcomed a number of prominent visitors and provided the backdrop for a number of important political talks. It served as a venue for formal and informal stages of the Peace Process, including the signing of the Anglo-Irish Agreement in 1985, decommissioning talks in 1999, and the negotiation of the devolution of policing and justice powers in 2010. Below we see President George W. Bush, Prime Minister Tony Blair and Irish Taoiseach Bertie Ahern arriving at Hillsborough in 2003 for a summit. 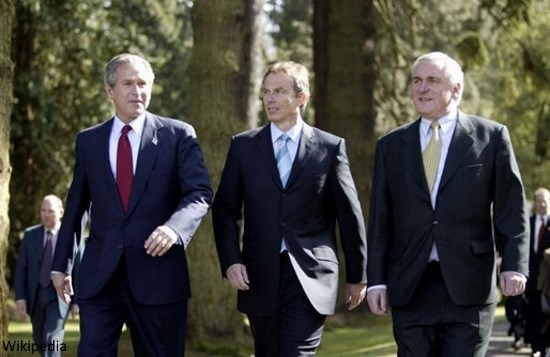 As it's the first time we've had the opportunity to refer to the Cambridges by their Northern Irish title, I did a little research. William and Kate were granted the titles of Baron and Baroness Carrickfergus as a gift by the Queen on their wedding day. Carrickfergus is the oldest town in Country Antrim. 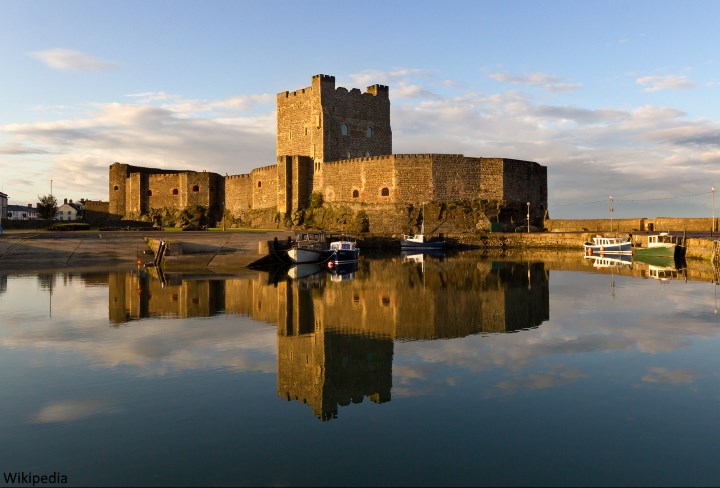 Its name translated to English means 'Rock of Fergus' and it is an older settlement than Belfast, the capital city of Northern Ireland. The town is the subject of the classic Irish song 'Carrickfergus', a 19th-century translation of an Irish-language song which begins with the lyrics "I wish I was in Carrickfergus". 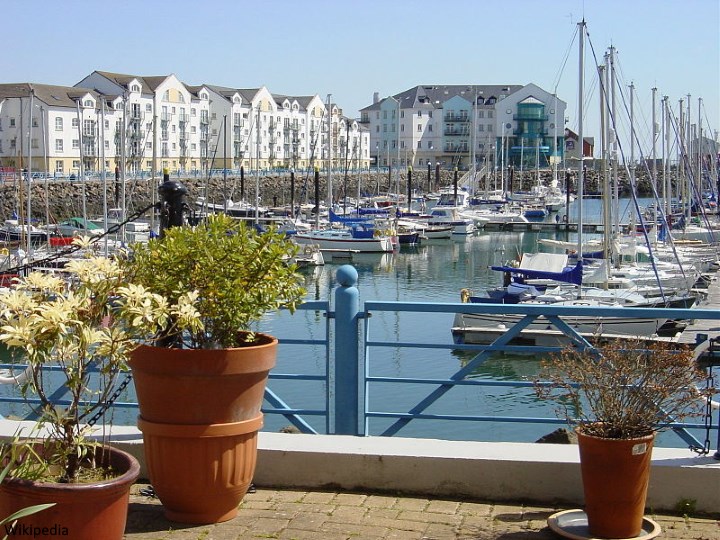 More on the history of the title from Wikipedia:


The Duchess brought back a favoured coat she's had in her closet for a decade. 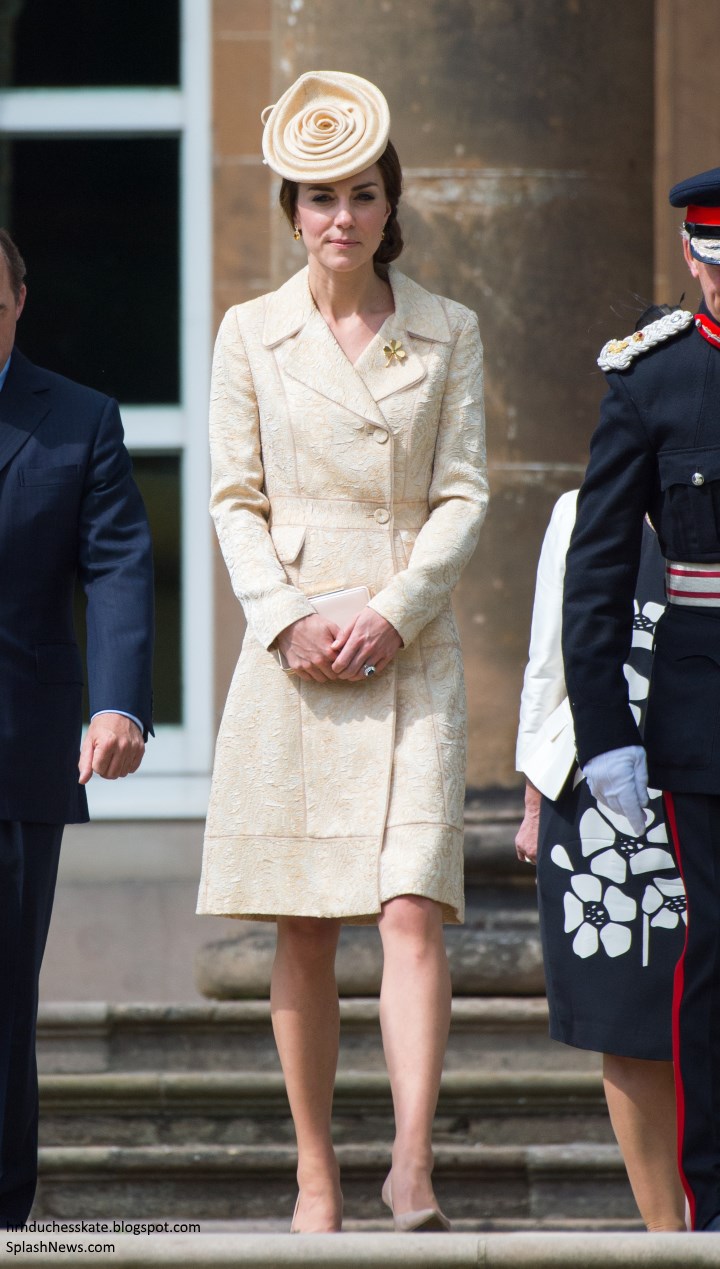 The gold brocade coat by Day Birger Et Mikkelsen is from their Resort 2006 Collection. The Duchess first wore it in May 2006 for the wedding of the Duchess of Cornwall's daughter, Laura Parker Bowles, who married former model Harry Lopes at St Cyriac's Church in Wiltshire. It's been worn several times since, most notably Zara Philipps wedding in 2011 and the Paralympic Opening Ceremony in 2012. 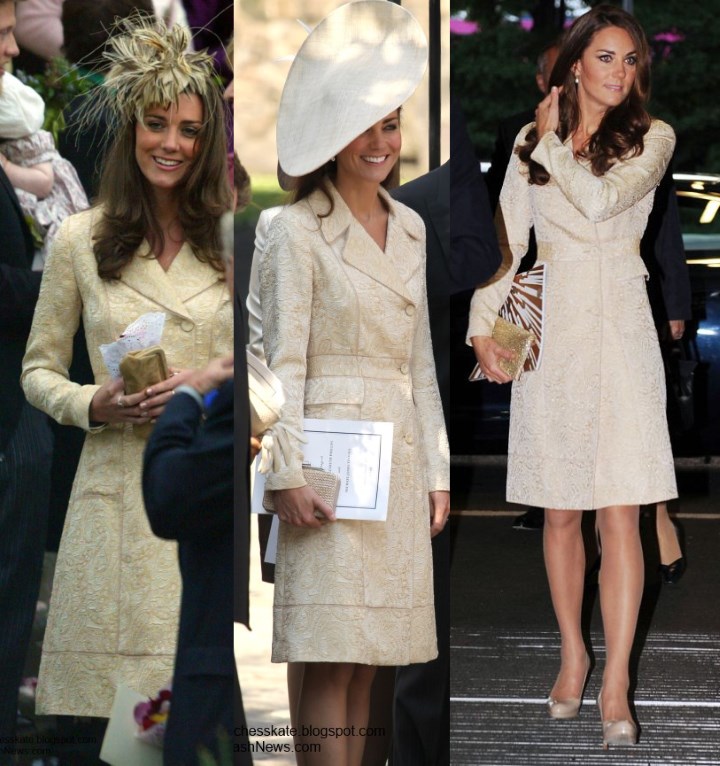 What Kate Wore suggests Kate may have worn her lace Collette Dinnigan dress underneath. The Duchess wore the dress underneath the same coat to Zara Philipps wedding and to a 2007 book launch. 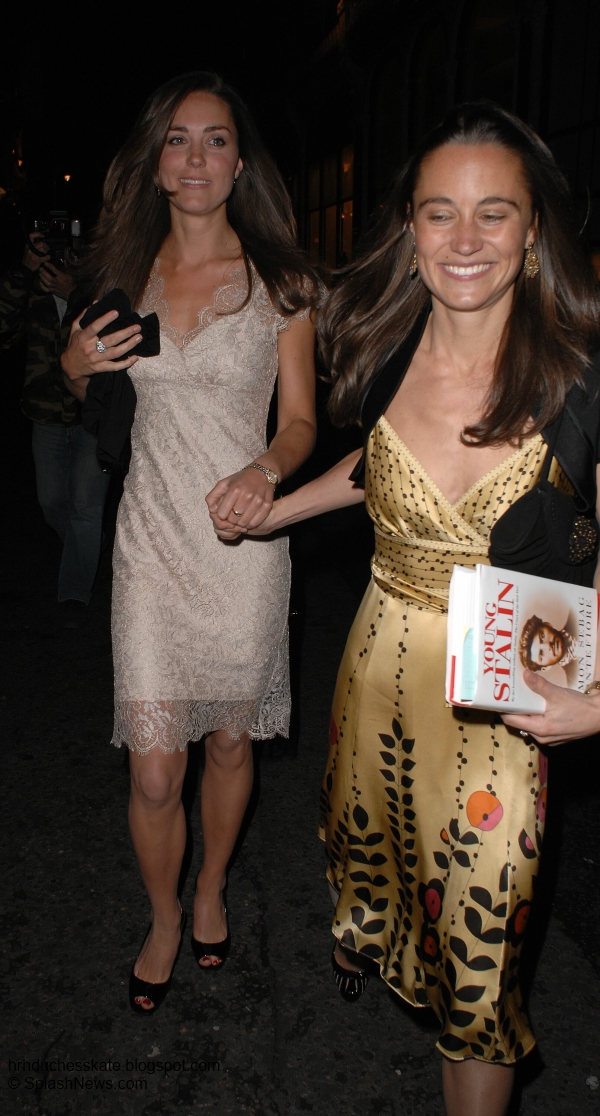 Kate wore the Lock & Co. Morning Rose Perching Hat (with thanks to Me and My Mum Kate). The £645 piece is described: "Swirls of pillarbox-red sinamay circle around a draped centre, inspired by the morning rose flower. The hat sits neatly on the side of the head with the tip of the teardrop shape adding elegant height to the wearer." Below we see it in red. 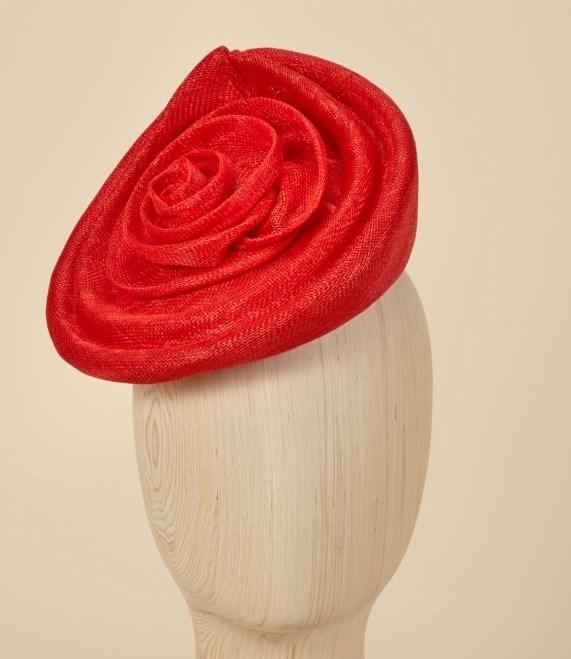 The hat has been generating quite a bit of debate on social media. What do you think of it? 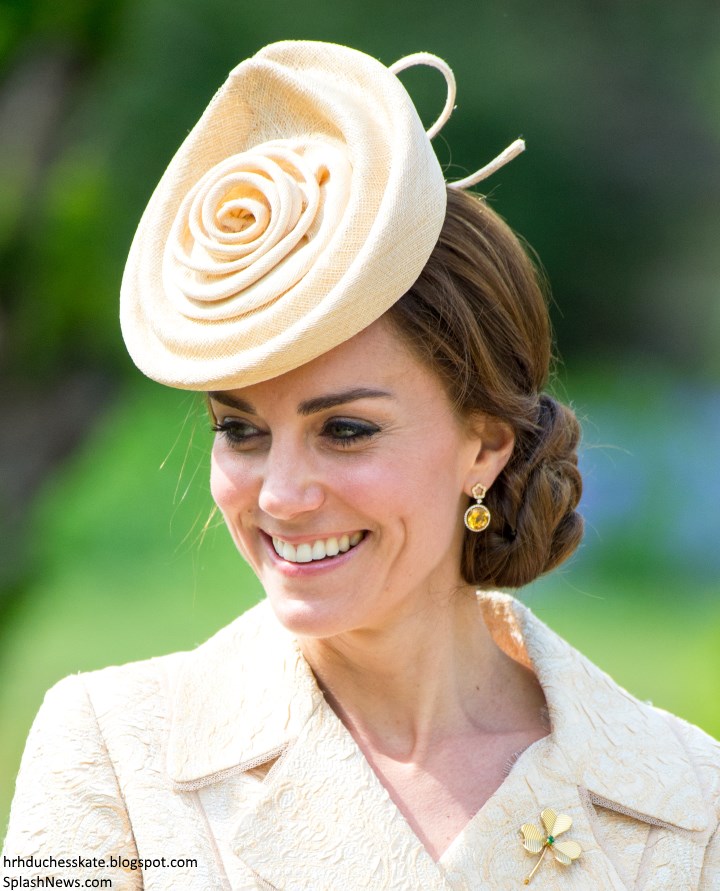 Another beautiful up-do for HRH today. 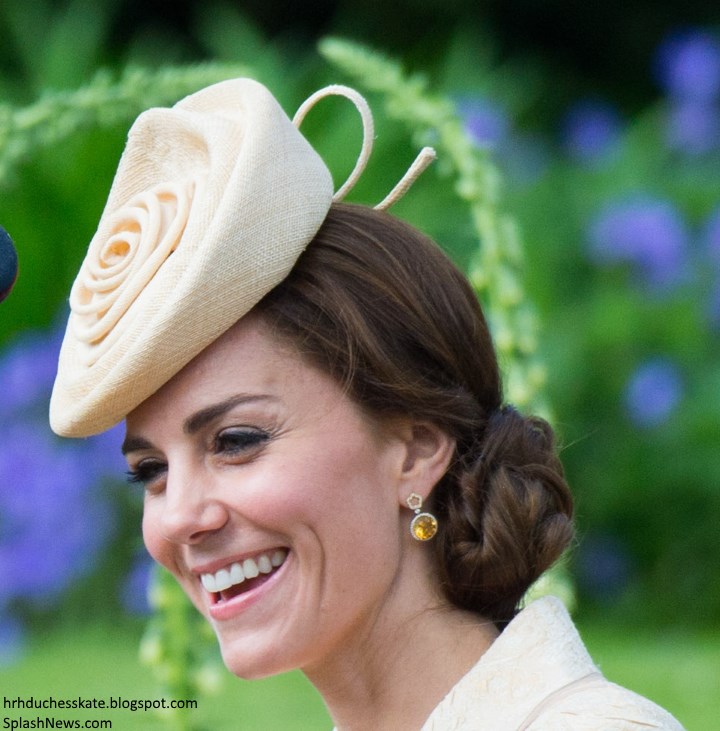 
And carried the brand's Nina Clutch.


Kate debuted a new pair of Kiki McDonough earrings. It appears she wore a customised version of the £2,900 Eden Diamond Flower and Lemon Quartz Drop Earrings (with many thanks to Rebecca and Irish Sara).


Fittingly, Kate wore the Shamrock Brooch on her lapel. The three-leaf brooch belongs to the Irish Guards and they determine to whom it be loaned. It has been previously worn by the late Queen Mother and Princess Anne. 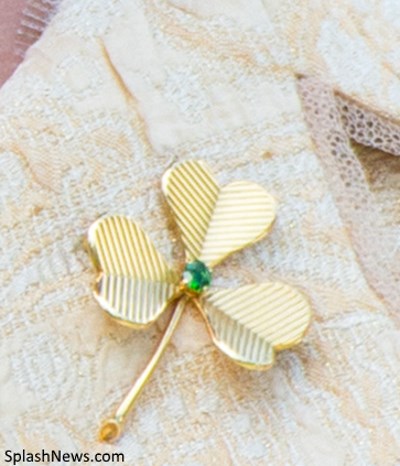 It was first worn by Kate for an Irish Guards Armed Forces Day in 2011. Since then we've seen the Duchess wearing the brooch several times whilst presenting shamrock on St Patrick's Day. 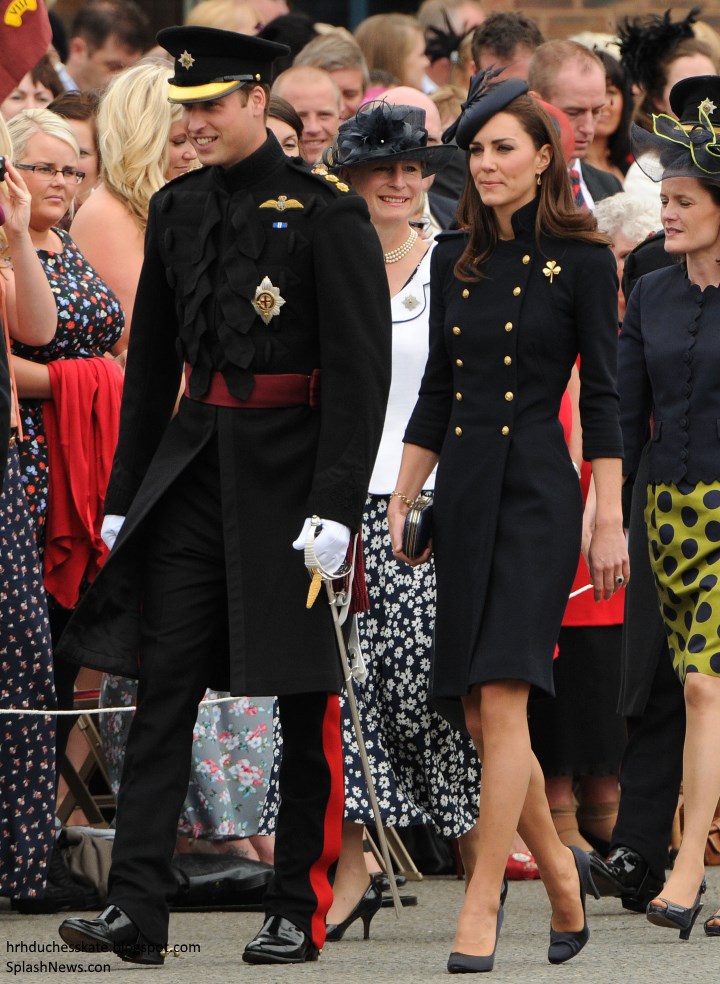 It's been such a fun week of royal watching! It began with the SportsAid anniversary dinner last Thursday - during which Kate wowed in the royal blue Roland Mouret Nansen Gown and statement earrings. On Friday, she chose a pretty pale blue Catherine Walker coat-dress for a service at St Paul's. Trooping the Colour saw Kate bring back the McQueen coat-dress from Charlotte's christening. The Patron's Lunch on Sunday was a hit with the Duchess in color-block Roksanda, and Kate brightened up a rainy day in red Catherine Walker and killer Gianvito Rossi Pumps for Garter Day. 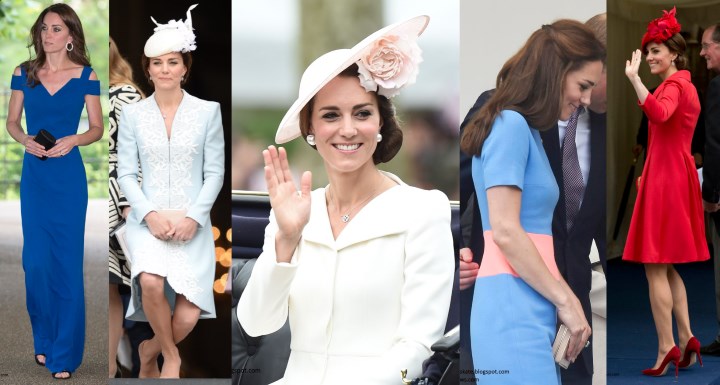 Royal reporter Emily Andrews exclusively revealed we'll see William and Kate at Ascot tomorrow "with some very special guests". With thanks to Claudia for alerting us We'll see you then!
Posted by Admin at 17:40:00