UPDATED: Kate in Goat & Banana Republic for Heads Together Launch

Fresh from last night's spectacular celebration of Her Majesty's 90th birthday, the Duke and Duchess of Cambridge and Prince Harry attended the launch of Heads Together - their campaign to end stigma around mental health - at the Queen Elizabeth Olympic Park. 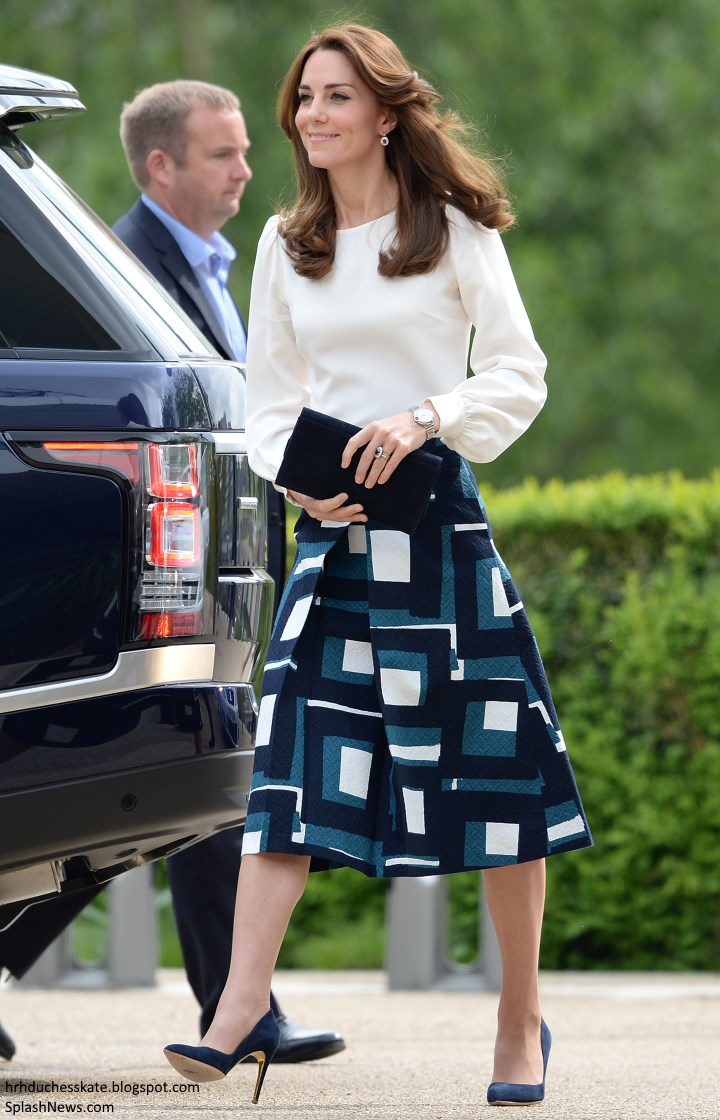 William, Kate and Harry are keen to build on the great work that is already taking place across the country, to ensure that people feel comfortable with their everyday mental wellbeing, feel able to support their friends and families through difficult times, and that stigma no longer prevents people getting help they need. 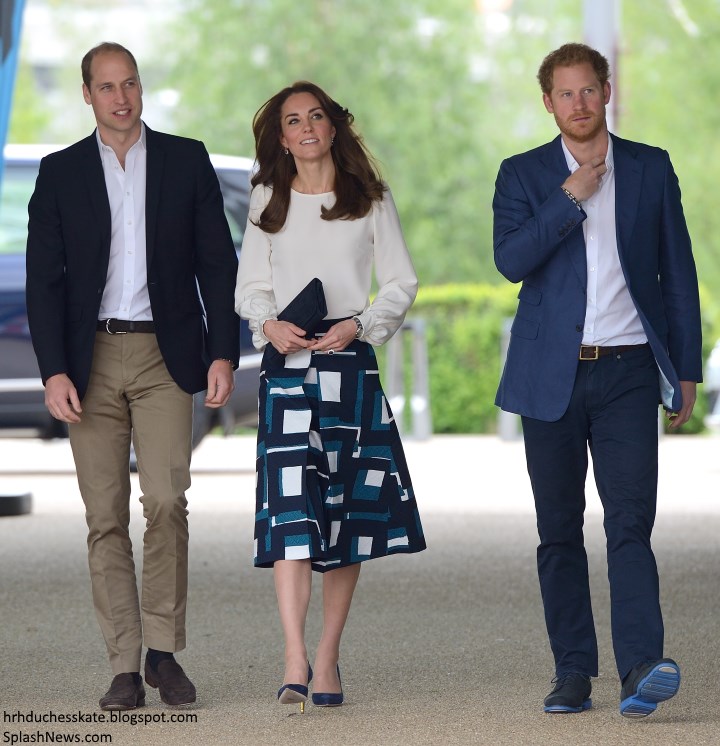 The Palace noted the ambitious campaign is "the biggest project they have undertaken together to date, and will see them working in partnership with inspiring charities to change the national conversation on mental wellbeing". 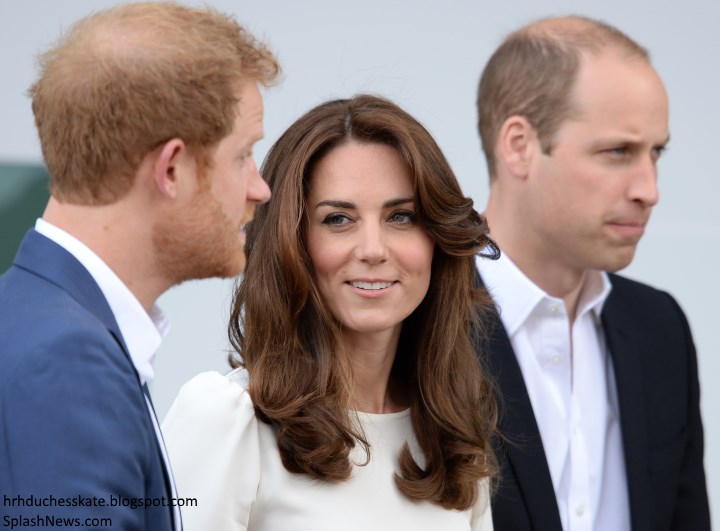 The organisations involved include Kate's patronage Place2Be and Best Beginnings, CALM – the Campaign Against Living Miserably, Contact (a military mental health coalition), Mind, The Mix, and YoungMinds. According to the Charity Partners page on the Heads Together website, Kate's newest patronage, the Anna Freud Centre, has been added to the list of participating charities.


News of the campaign was released late last month, when an introductory video featuring the royal trio was released. It was also revealed Heads Together was chosen as the 2017 Virgin London Marathon Charity of the Year, an exciting coup for the initiative in terms of fundraising and awareness. At next year's marathon, hundreds of runners will take to the streets in support of mental health. 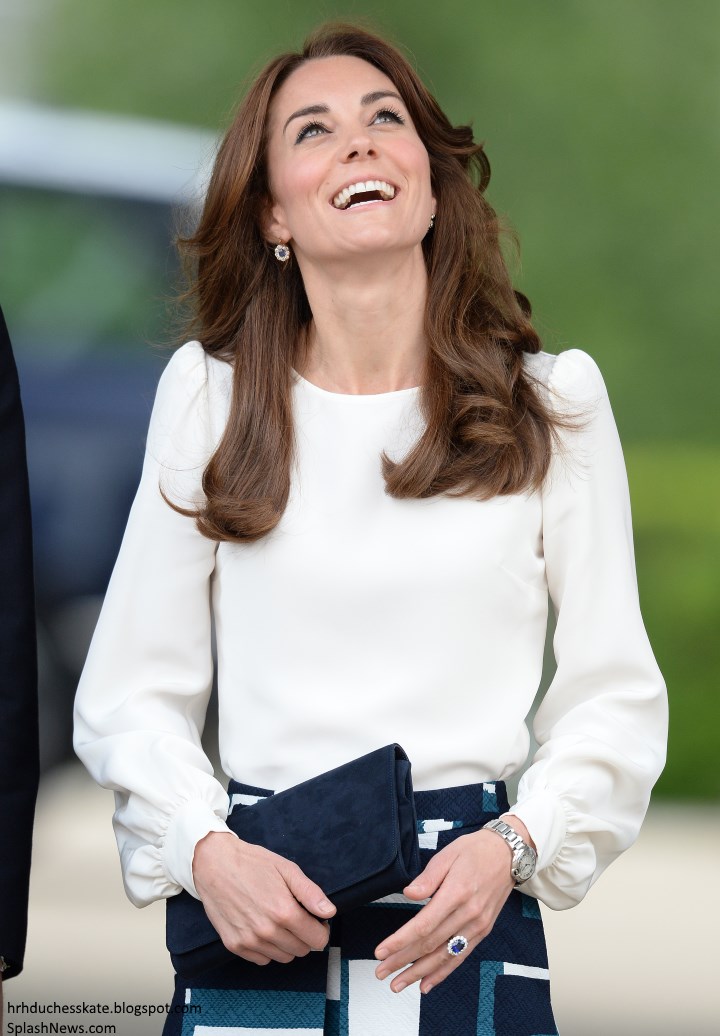 They were joined by campaigners, beneficiaries, and ambassadors from the mental health charities who shared their aspirations and experience in the field. 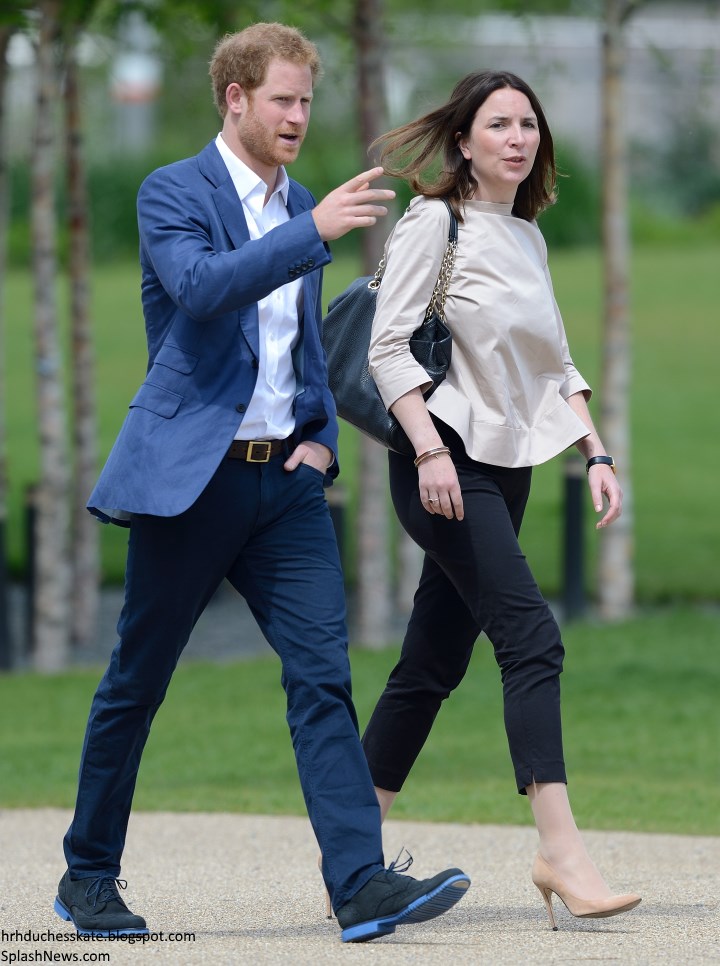 The launch offered an opportunity for the royals to outline their interests and ambitions for the campaign. During a joint speech. Kate said "Heads Together wants to help everyone feel much more comfortable with their everyday mental wellbeing". 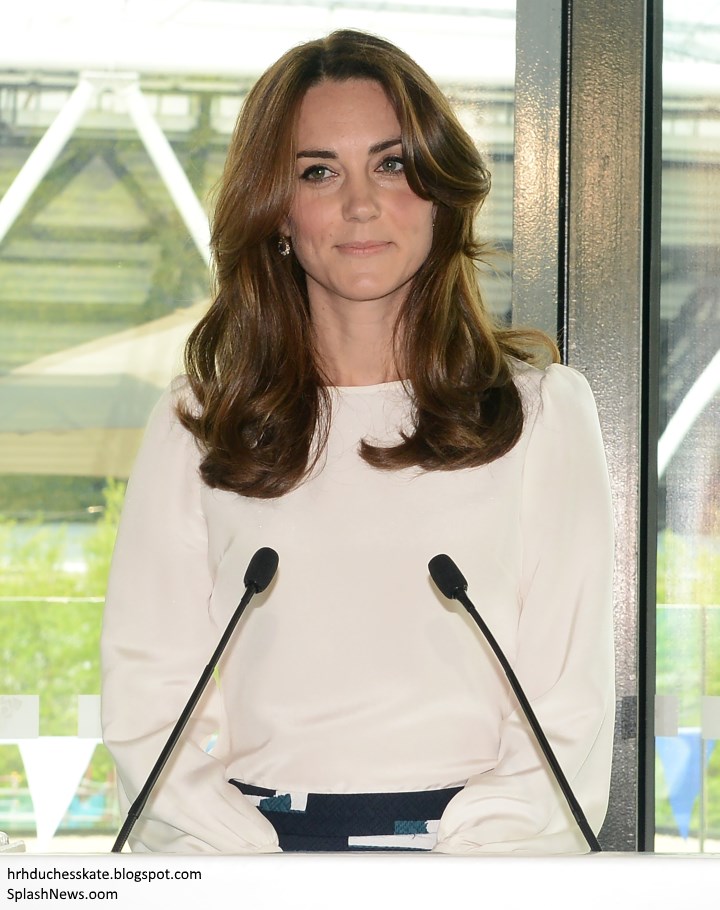 A look at the full speech:

'The Duke of Cambridge - Through our work with young people, emergency response, homeless charities, and with veterans, we have seen time and time again that unresolved mental health problems lie at the heart of some of our greatest social challenges.

The Duchess of Cambridge - Too often, people feel afraid to admit that they are struggling with their mental health.  This fear of judgment stops people from getting the help they need, which can destroy families and end lives. Heads Together wants to help everyone feel much more comfortable with their everyday mental wellbeing, and to have the practical tools to support their friends and family.

Prince Harry- The Heads Together campaign wants to involve all of you.  We're already working with our partner charities and thousands of people to change the way that people think about mental health.  We do not want prejudice and fear to stand in the way of people getting the help they need to cope with life.  As the year progresses, the three of us – working with all of you in this room and others who join us along the way – want to come up with practical ways of providing everyone who needs help with the right support and care. We want to build on the great work that others are already doing, but make it even more ambitious. By putting our heads together, we can all make a big difference.

The Duke of Cambridge - But first, Heads Together wants to get people talking.  The more we talk about mental health, the more normal the topic becomes, and the more we feel able to open up and seek support. By asking for help, by telling a friend we have a problem, by asking someone else how they feel – by having a conversation – we take the first step to feeling better about ourselves – and the first step to being able to cope better with the ups and downs of life. This is relevant to everyone.So let's all get our heads together and let's change the conversation, from one of silence and shame to one of optimism and support. Thank you for joining us at the start of this exciting journey.'


William, Kate and Harry saw first-hand the innovative approaches the charities will use to create a national conversation on mental health. 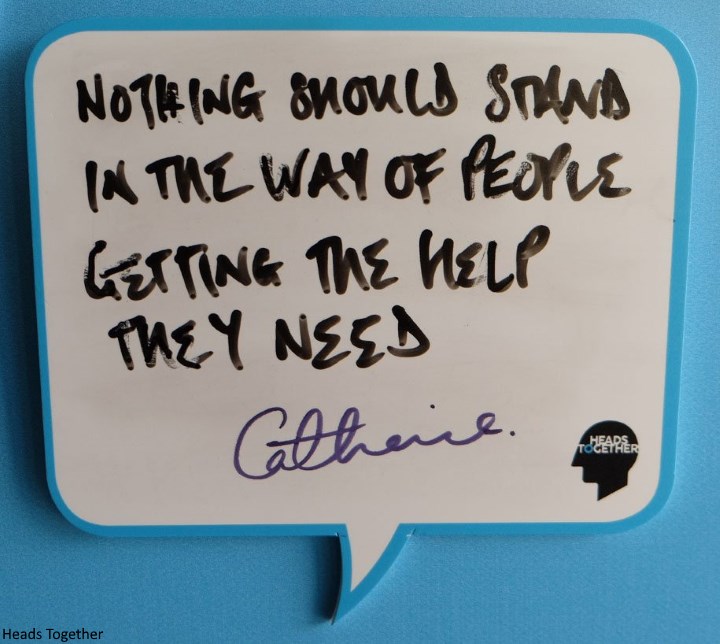 Place2Be recreated a Place2Be room - a calm and welcoming space in school children can visit. 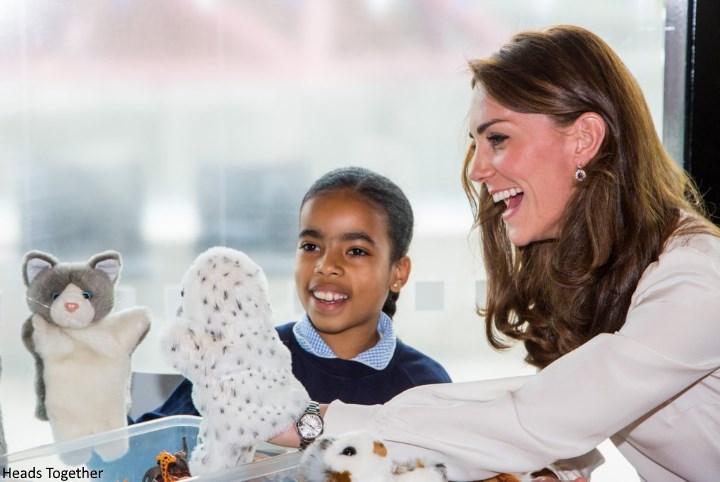 The Duchess played with children and discussed their experiences. 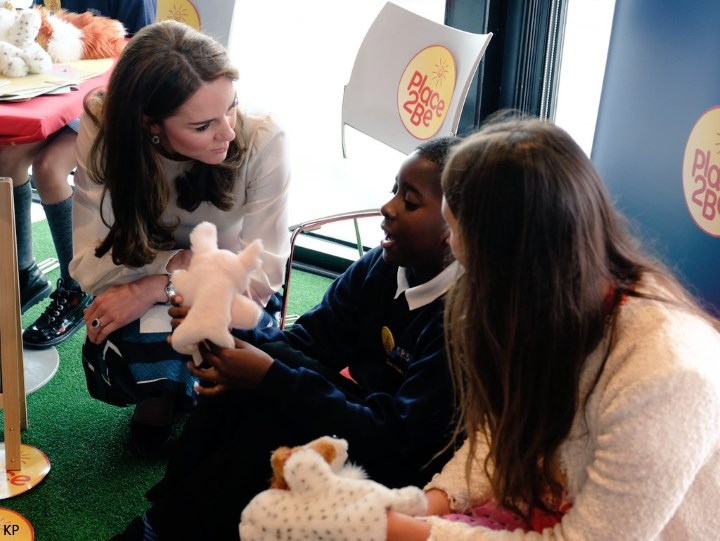 
When asked to write down what makes her happy, Kate wrote 'a walk'. 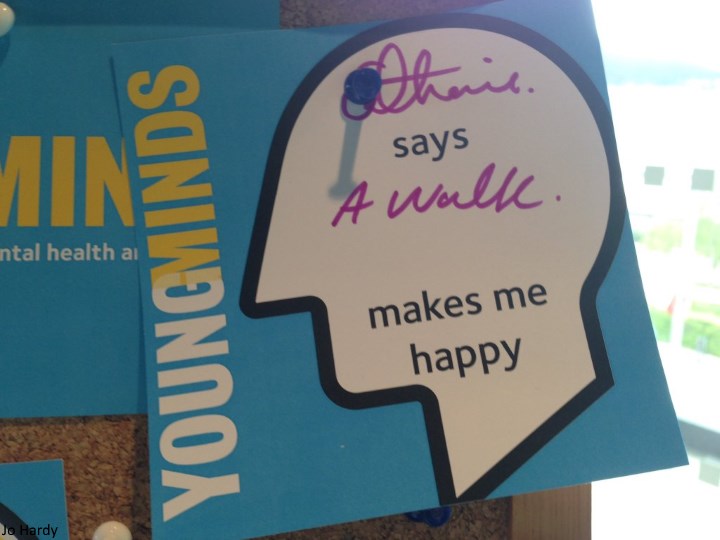 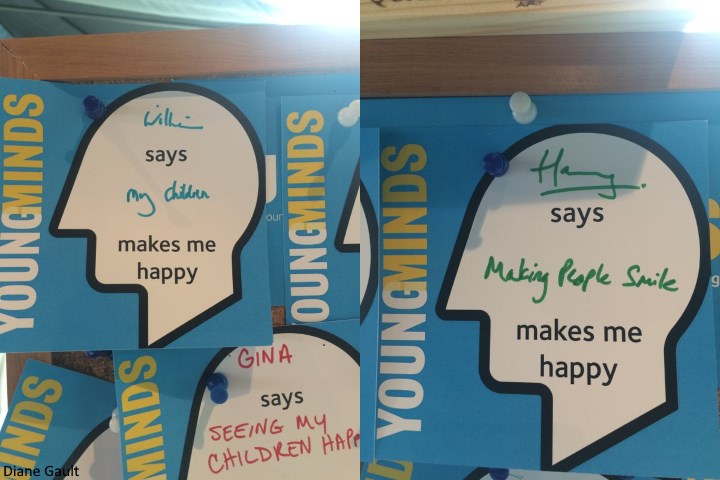 Kate looked at the Baby Buddy App - designed to support parents through pregnancy and beyond. 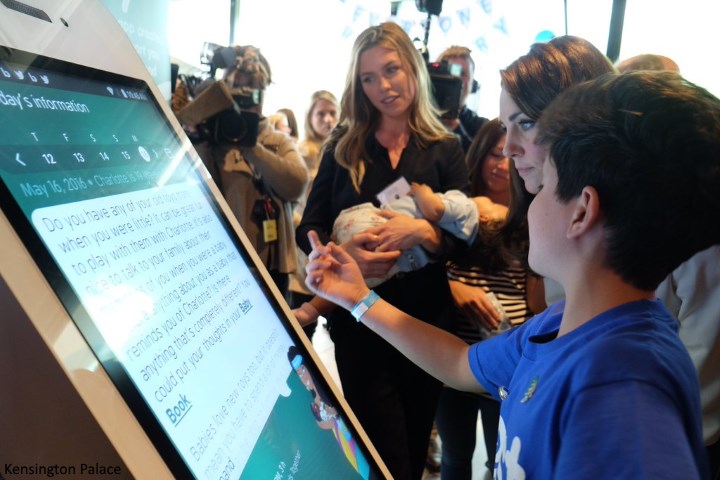 The royals enjoyed trying boxercise. William said Kate took to it "like a duck to water" and "she has a mean right hand". Ex-boxer Duke McKenzie said the Duchess was better than William and Harry "I think she's done this before". Kate met a DJ spinning records from The Mix. 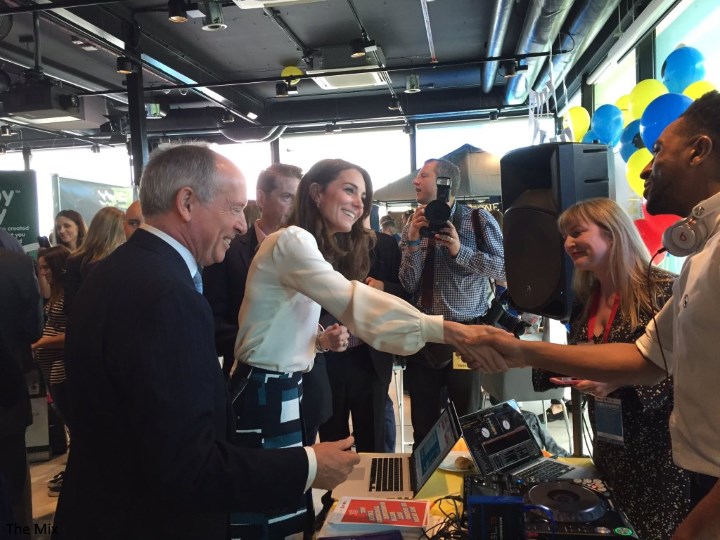 'All three royals also stopped off at a stand run by charity The Mix, a multi media national support service for under 25s who are asking young people up upload their favourite songs to create a special mix track. William, Kate and Harry were all asked to name their most uplifting songs. Harry - who actually got behind the decks and tried his hand at mixing with Kiss FM DJ AJ King - asked for him to play, appropriately, Naughty Boy's Runnin'- which is, apparently, the song he likes to go out running to, appropriately. 'I don't think I was any good, ' he admitted.

Kate asked for Emeli Sande's Heaven, a song she says she finds 'uplifting', while William also plumped for his favourite running track, Andy C Heartbeat Loud. Kate said: 'I would love to see what everyone uploads ands why.'


You can listen to 'Heaven' here. 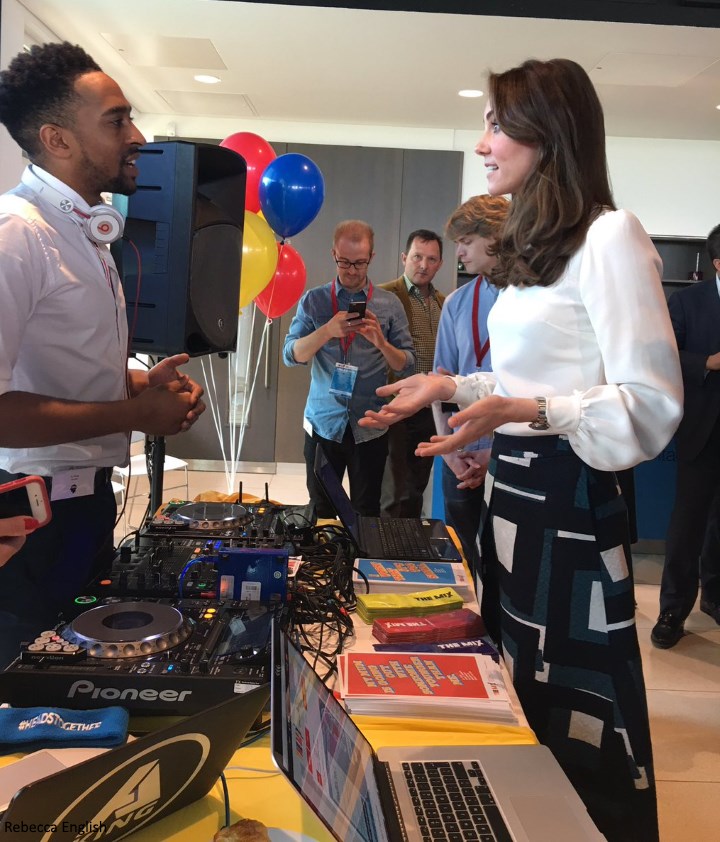 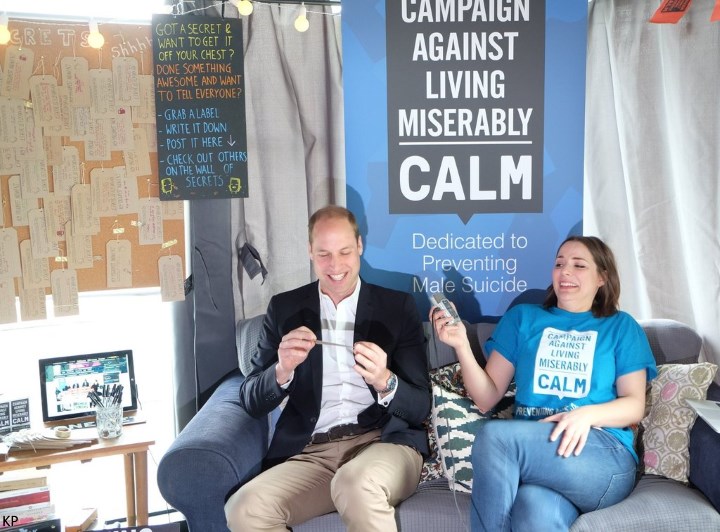 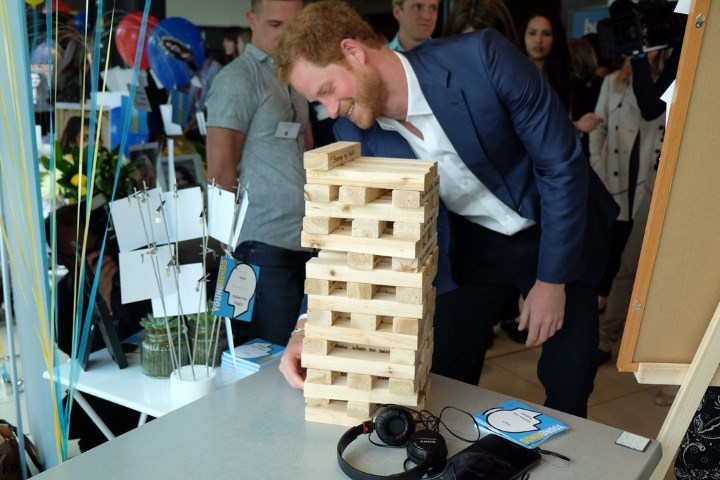 Heads Together social media pages have been active sharing quotes, stories, pictures and videos from mental health charities in an effort to get people talking. You can find their Facebook Page here and Twitter Feed here.


Kavita's story about her struggle with depression and the help of charity Mind is a very interesting one:

'In 2012, Kavita was diagnosed with a physical health condition and experienced a difficult time at work around the same time. The pressures meant that she was not sleeping properly and felt unable to cope. Kavita said: “I knew something was wrong, but thought that I should be able to cope better. I had a great job and amazing friends and family, and no-one would have guessed how much I was struggling.”

Kavita went to see her GP who diagnosed her with depression and she was referred for Cognitive behavioural therapy (CBT). Kavita realised that exercise, particularly running and swimming, helped her to feel physically and mentally better. Over time, the CBT and exercise made her feel stronger.

Over the years Kavita has become an active runner, and last year set her sights on running the London Marathon. She chose to raise money for Mind as mental health is a cause she feels very passionately for. Kavita said: “I have come to realise that depression is something that may affect me again. However, I know how lucky I am to have such amazing friends and family, to help me through these difficult times. Many people don’t have anyone and charities such as Mind are a lifeline.” Kavita, is running the London Marathon in 2017 in aid of mental health charity, Mind as part of the ‪#‎HeadsTogether‬ campaign.'


Heads Together are asking everyone to "Share, download or pin this Heads Together pledge & help us change the national conversation on mental health."


Moving on to what Kate wore today.

Kate looked elegant in the cream Binky Blouse by Goat for the engagement (with thanks to The Royals and I).


The £290 garment is described as "A classic and beautifully crafted blouse is a key building block of a capsule wardrobe and the understated and feminine Binky blouse fits the bill perfectly. This slim fitting blouse has a round neck and full sleeves that gather into the cuffs with silk covered buttons. "


A closer look at the full sleeve.


The Duchess teamed the blouse with the Blue Geo Jacquard Midi Skirt by Banana Republic. The £105 skirt is a cotton A-line piece with a striking pattern. Midi skirts are very much in fashion at the moment and I think pairing it with a simple elegant blouse worked very well. It's available in very limited sizes at Zalando.


Kate accessorised with her sapphire and diamond drops. 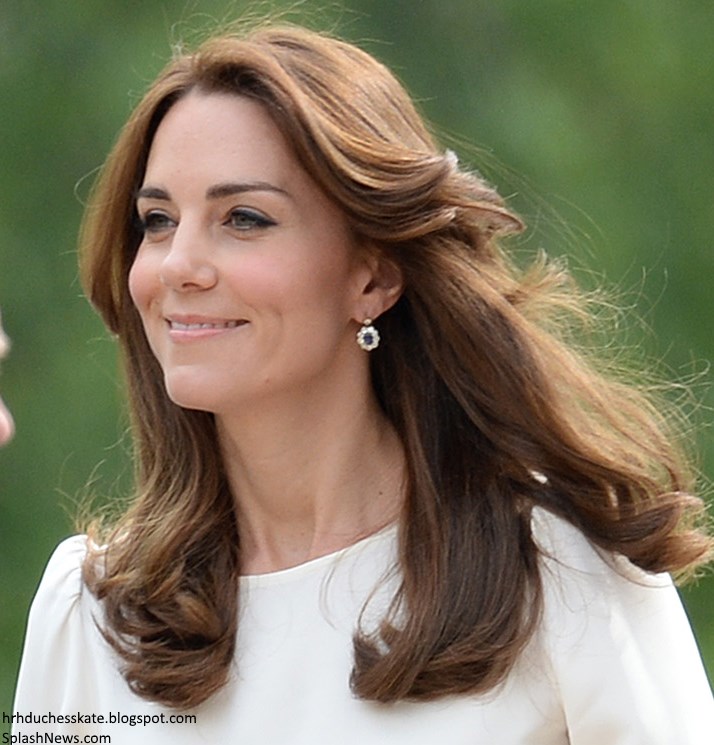 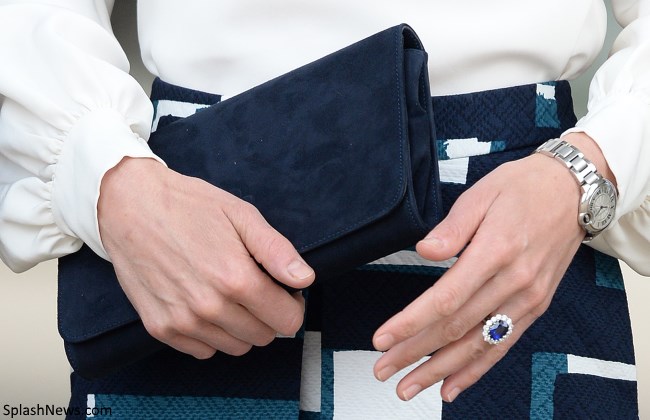 
The speech can be viewed in its entirety at You Tube.


You can watch a video of the royals boxing here.


After the launch the trio attended a private meeting with charity CEOs. 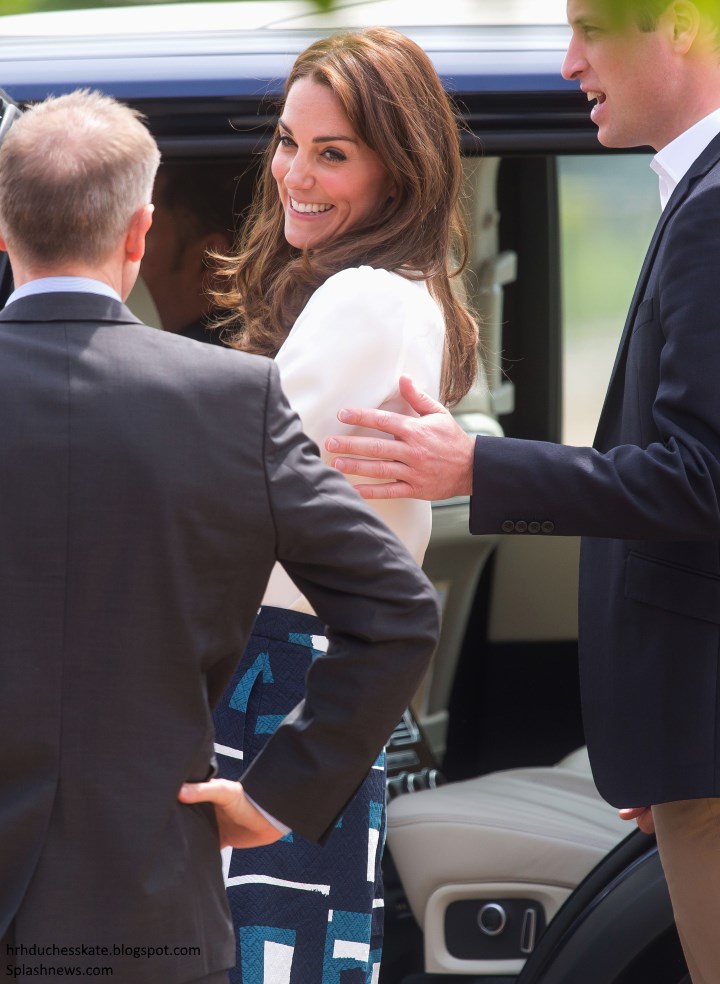 It was great to see the royals today, I'm very much looking forward to seeing more engagements in support of Heads Together in the coming months. 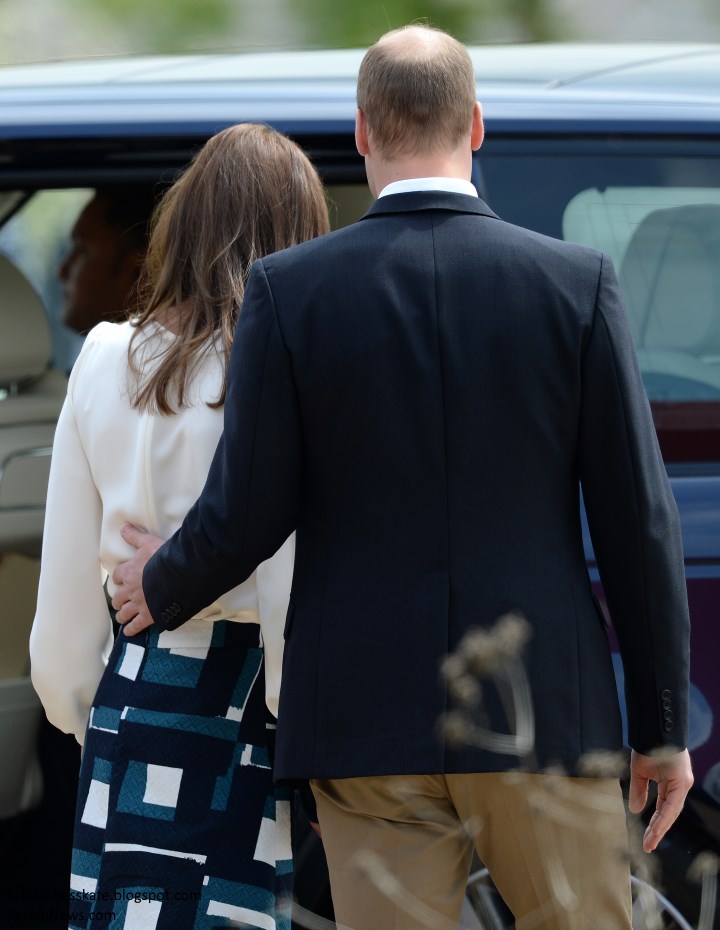