Royal Repeats for Kate as Tour Moves to Bhutan!

The Duke and Duchess of Cambridge arrived at Guwahati airport early this morning to catch a flight to Bhutan for the next leg of the royal tour. 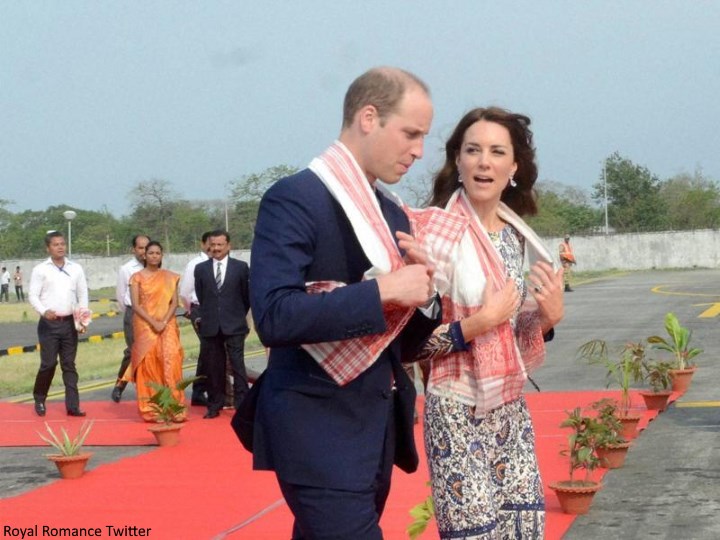 The Duke and Duchess have been having a tremendous time thus far. Following a hectic few days they enjoyed a relaxing evening at Kaziranga, however, there was surprise in store. Last night a 6.9 magitude earthquake hit Myanmar.  Palace officials said William and Kate felt the quake: "Tremors felt across the region. Everyone is OK." A large crowd was waiting at the airport hoping to meet the royals, capture photos and give gifts. 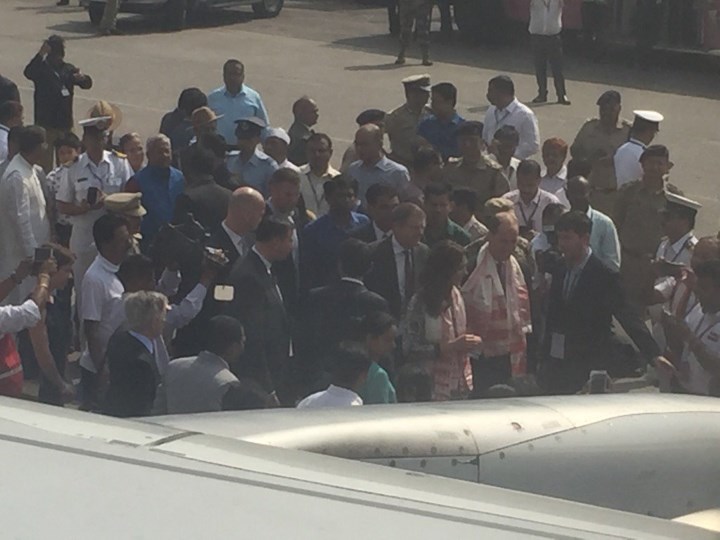 The Duchess was in a familiar piece for the flight: the Tory Burch Chrissy Dress she first wore for the 2014 Place2Be conference. As the couple attended the engagement privately, photos were extremely limited. There's a few of Kate leaving at Just Jared. The £345 dress is from the Resort 2014 Collection. The multicolour garment features a detachable buckle fastening waist belt, button fastenings at the front, and falls to just above the knee.


Kate's dress is sold out but an updated version of the Chrissy dress in Hudson Blue Linosa is available on the Tory Burch website.


William and Kate travelled with the royal press pack for what proved to be a very exciting flight. Royal reporter Victoria Murphy said: "Captain tells us not to 'be alarmed' by sharp turns into Bhutan past rocky terrain as it is 'normal approach', eeek." 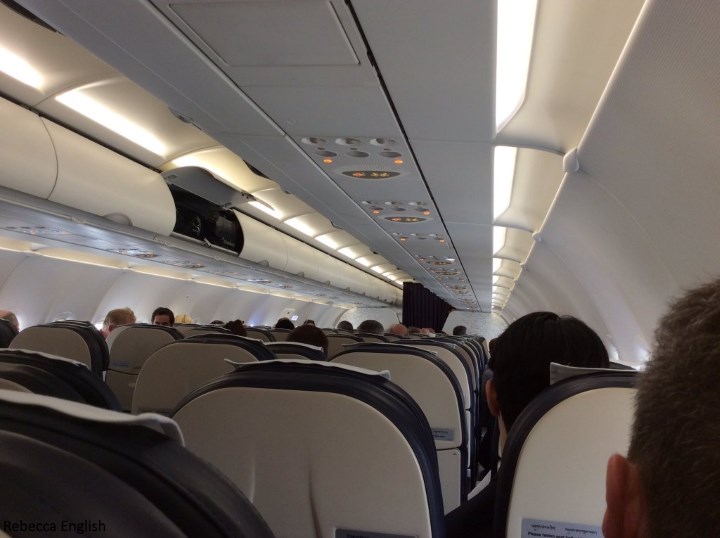 There were strong winds during the flight and it's a very tight approach. Only a small number of pilots are certified for the mountaineous drop in. Below, a photo from the flight shared by Emily Andrews. I expect keen photographer Kate snapped a few shots too! 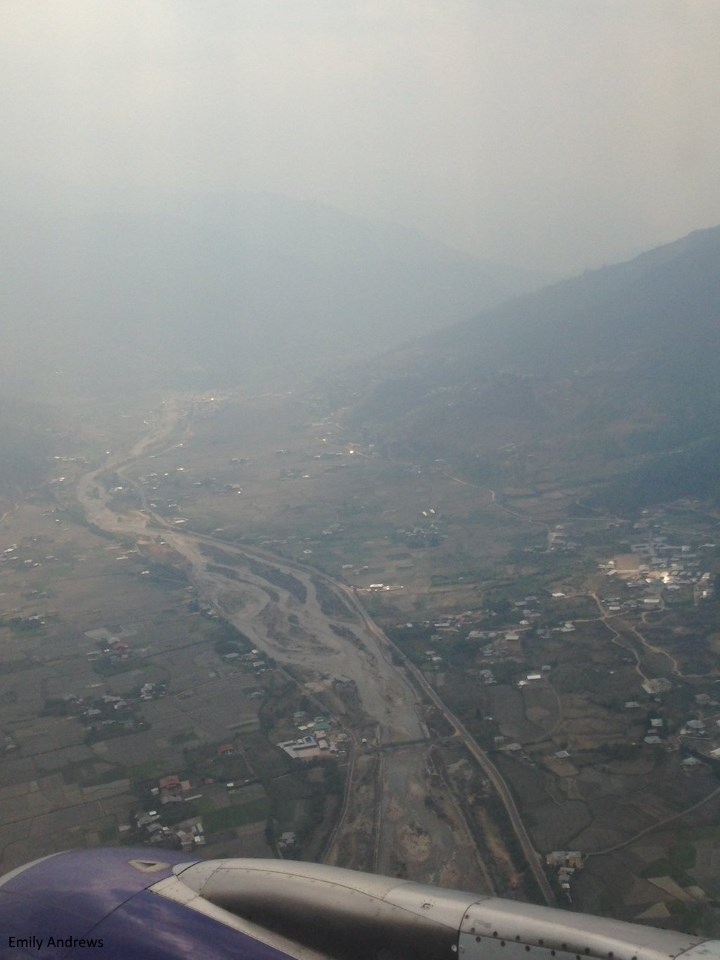 The red carpet awaited the royals at Paro Airport. 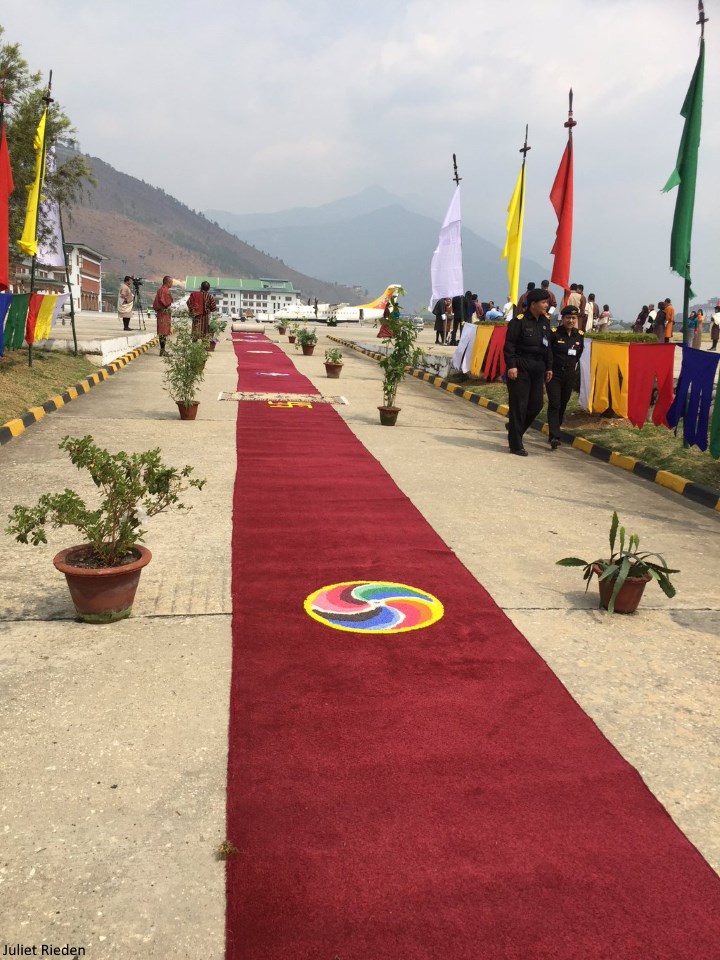 Multi-coloured rice was used to create beautiful designs on the red carpet. 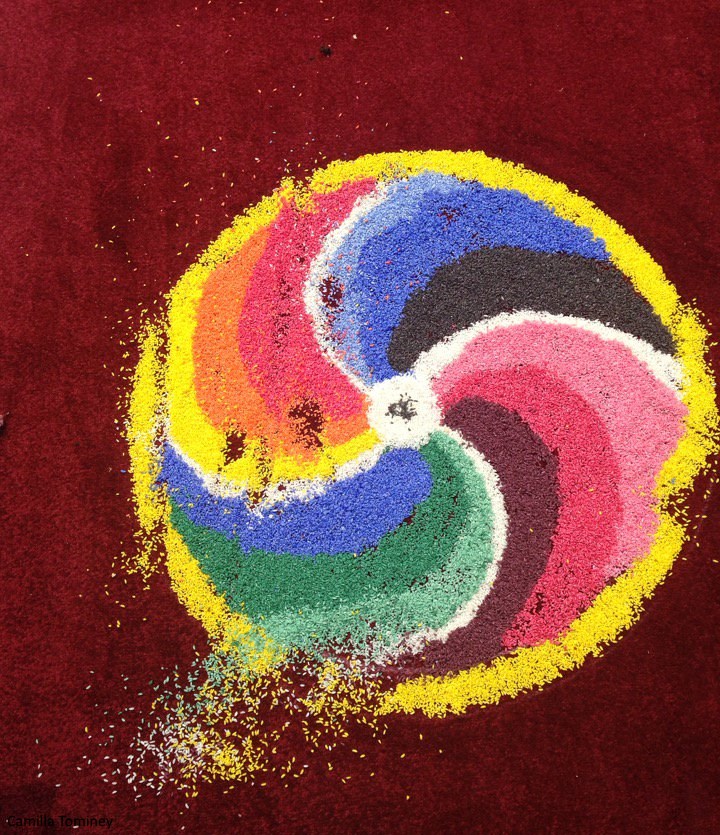 And Royal Visit Bhutan began as Their Royal Highnesses step off the plan. 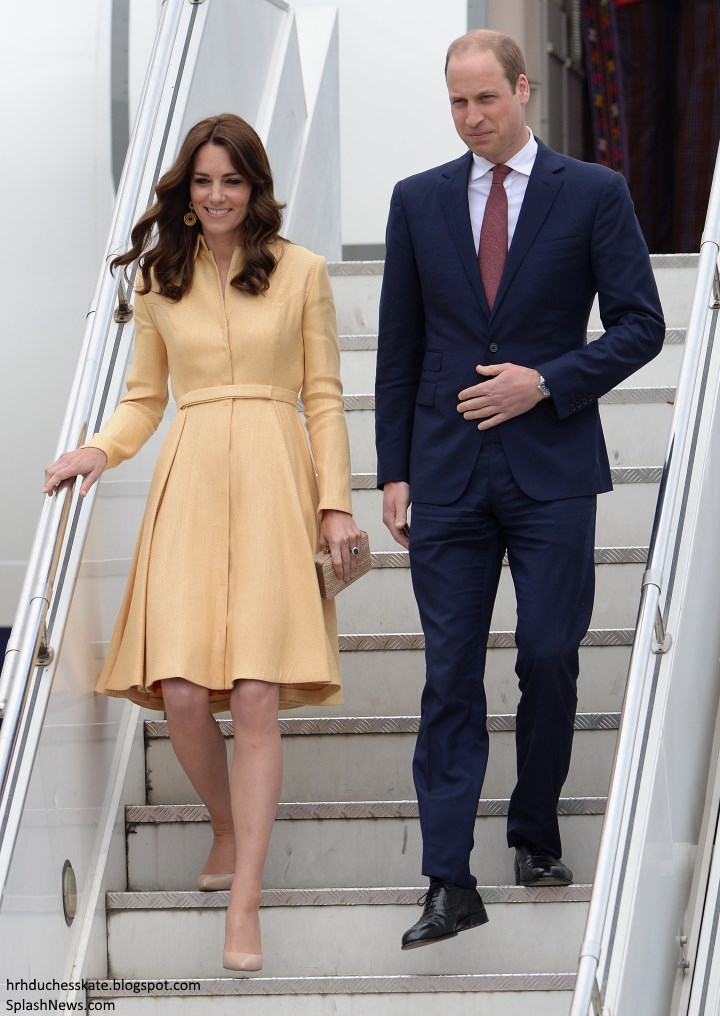 William and Kate will have seen stunning views as they stepped off the plane. The couple are clearly eager to take in as many sights as possible - they were in the cockpit for the landing. The King and Queen arrange it with the airline. 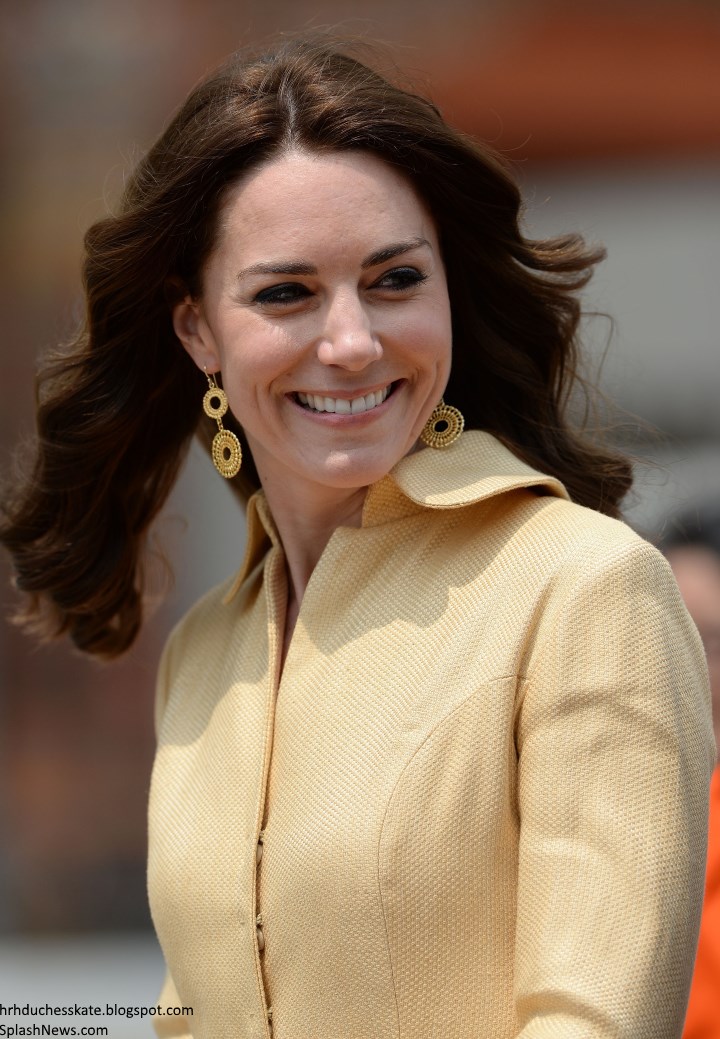 The Cambridges received a warm welcome from the King of Bhutan's eldest sister, Princess Chimi, and her husband, Prince Dasho. It was a lovely touch for the Prince and Princess to greet William and Kate at the airport. Princess Chimi has studied in America, completing a bachelor's degree with double majors in international relations and economics from Wellesley College in Massachusetts, and a master's degree in public administration from Columbia University in New York City. The Princess is committed to supporting children and services as vice president of the Bhutan Youth Development Fund. William and Kate received gifts from local children. 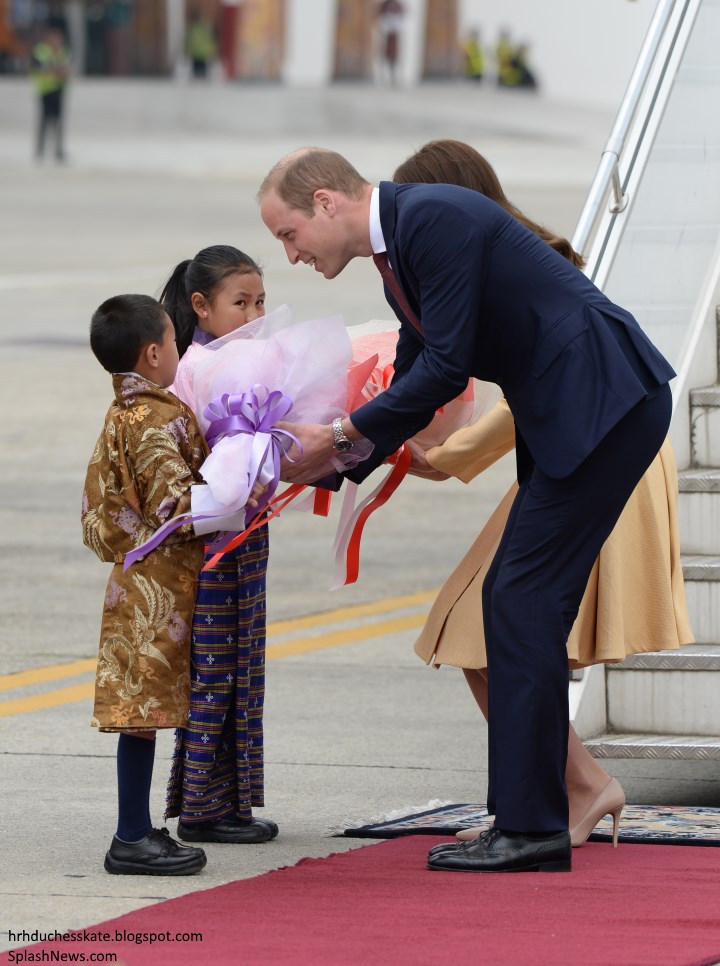 The couple immediately got a sense of the scenic beauty of the Himalayan kingdom as they took a scenic drive to the capital city of Thimphu. 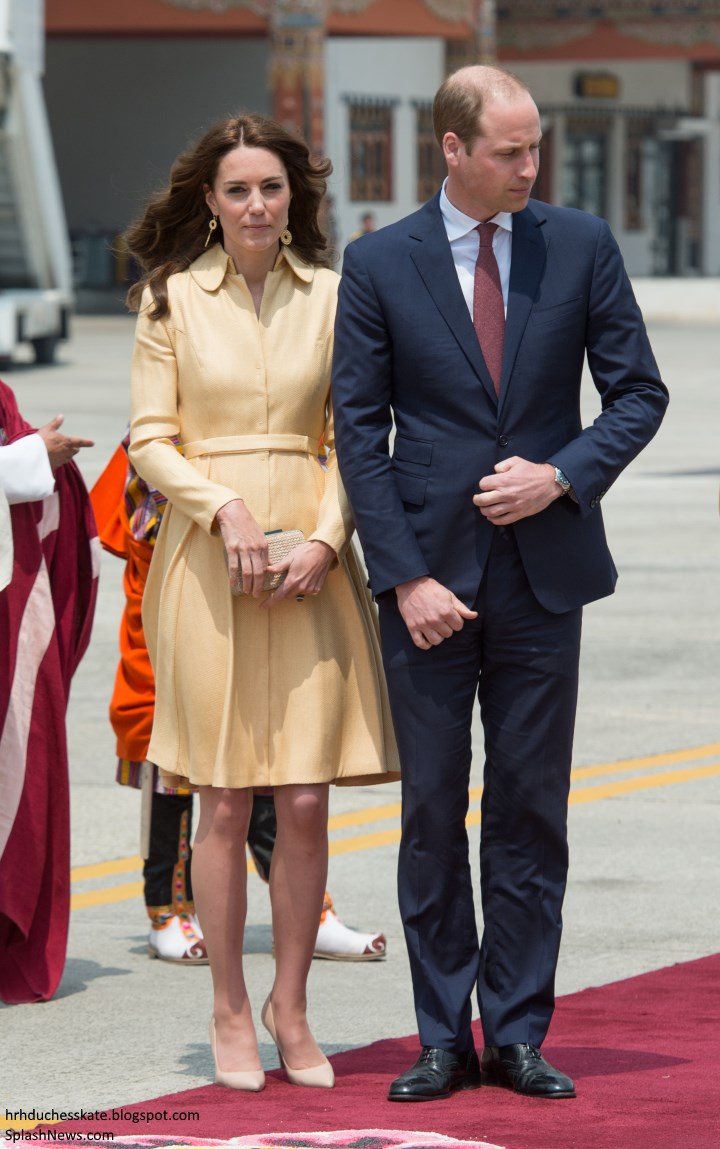 The sights along the drive. 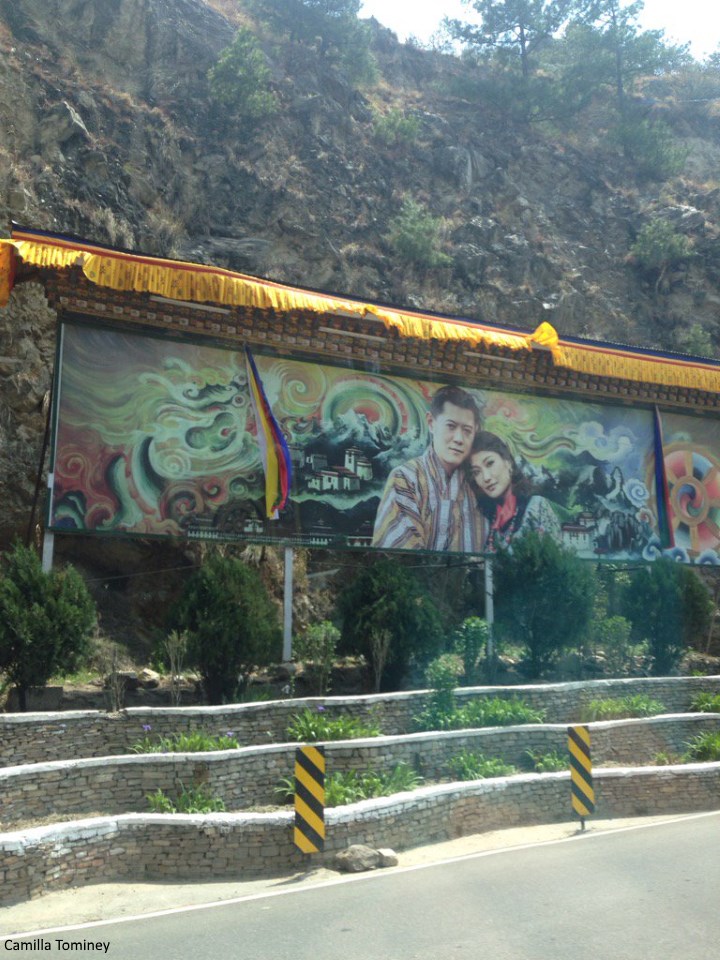 William and Kate stopped to say hello to children who had lined up along the road.

Such a lovely welcome! The Duke and Duchess stop to say hello to children who lined the road to Thimpu. pic.twitter.com/GOqQY6FXtq
— Kensington Palace (@KensingtonRoyal) April 14, 2016


The couple arrive at their hotel, the Taj Tashi. 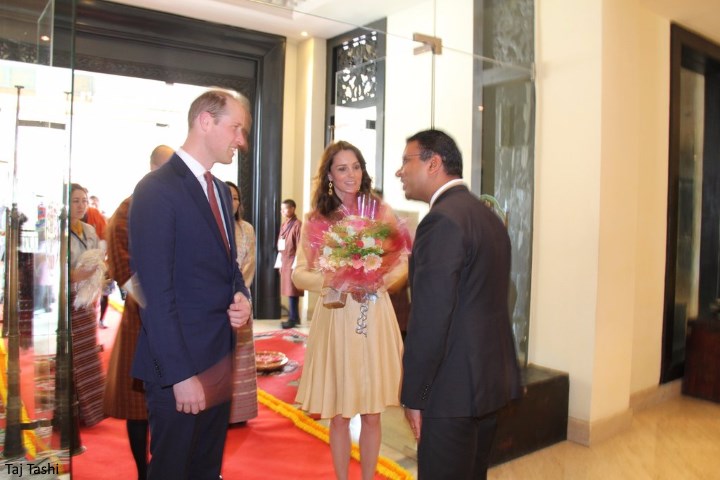 The Taj Tashi opened in 2008 and is the first five-star hotel in Bhutan. It's a beautiful building located an hour from Paro airport. It boasts fifty-three bedrooms and nine suites with sweeping mountain views.

Initially, I didn't recognise Kate's coatdress. I knew it was familiar, recognised the colour and silhouette but it still took me a few moments to realise Kate was wearing her £1,200 bespoke Emilia Wickstead soft-yellow gold coatdress from the 2012 Order of the Thistle service. At the time Ms Wickstead revealed the garment made of yellow gold raffia fabric took six weeks to complete. 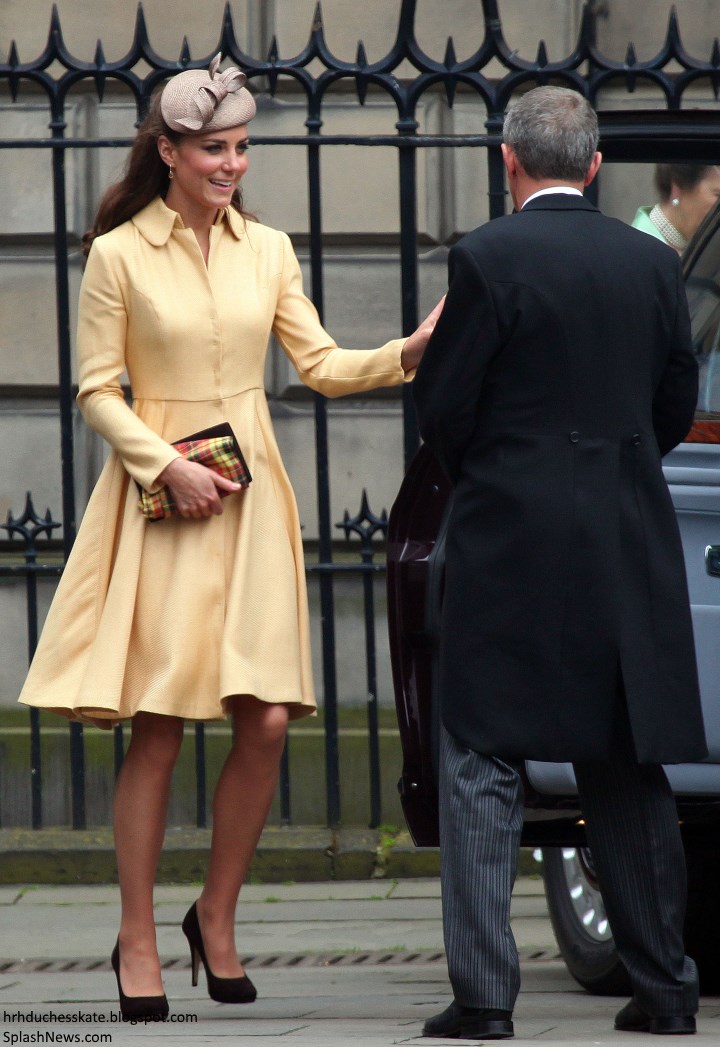 It was very much unexpected to see Kate in the coatdress again. I imagine it was chosen due to its colour and a nod to the yellow in Bhutan's flag. The dress has been altered since Kate first wore it almost four years ago - particularly at the waist with the addition of a belt. 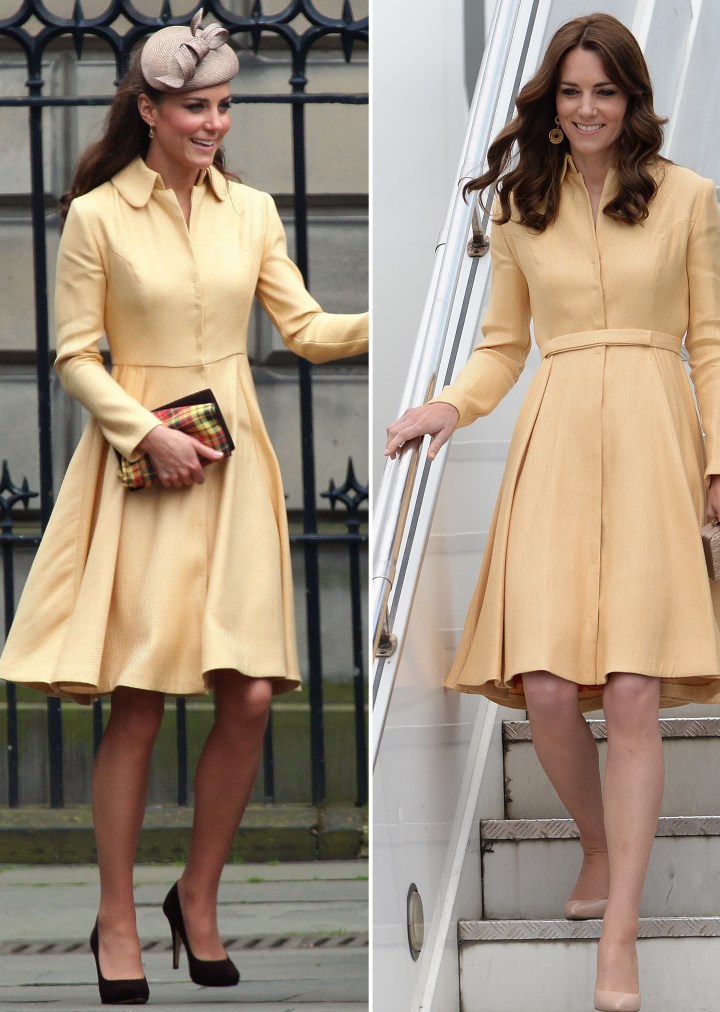 A closer look at the belt. 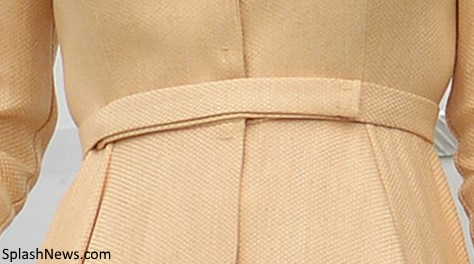 
The Duchess wore a new pair of gold earrings. We'll update when they are identified. 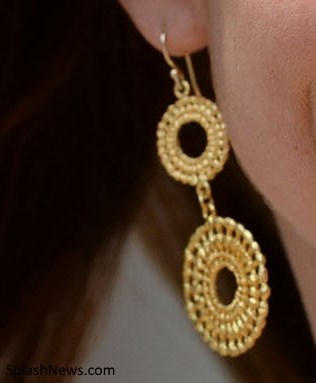 You can watch an arrival video here.


Next, William and Kate will travel to the beautiful Thimphu Dzong where they will take part in a Chipdrel - a traditional welcoming procession. Inside the Dzong, they will have a private audience with the King and Queen of Bhutan.
Posted by Admin at 08:01:00