We're back with a brief post covering the release of a new photo of Her Majesty the Queen with her three heirs, Prince Charles, Prince William, and the ever-adorable Prince George to mark a new set of stamps by the Royal Mail to mark Her Majesty's 90th birthday on Thursday. The foursome are impeccably matched in shades of blue for the image taken in the White Drawing Room at Buckingham Palace. 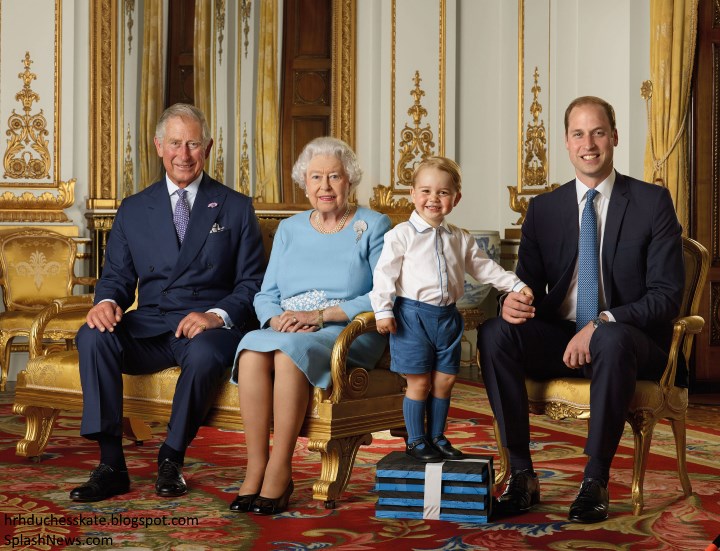 Taken last June, the smiling tot is photographed perched on a stack of foam blocks to raise him to the correct height, so he can hold William's hand. London-based Ranald Mackechnie, a specialist portrait photographer, described how he came up with a plan to ensure the Prince's head appeared at roughly the same height as the adults, revealing he and his team spent two days setting up a test shoot with the blocks before the final shoot. 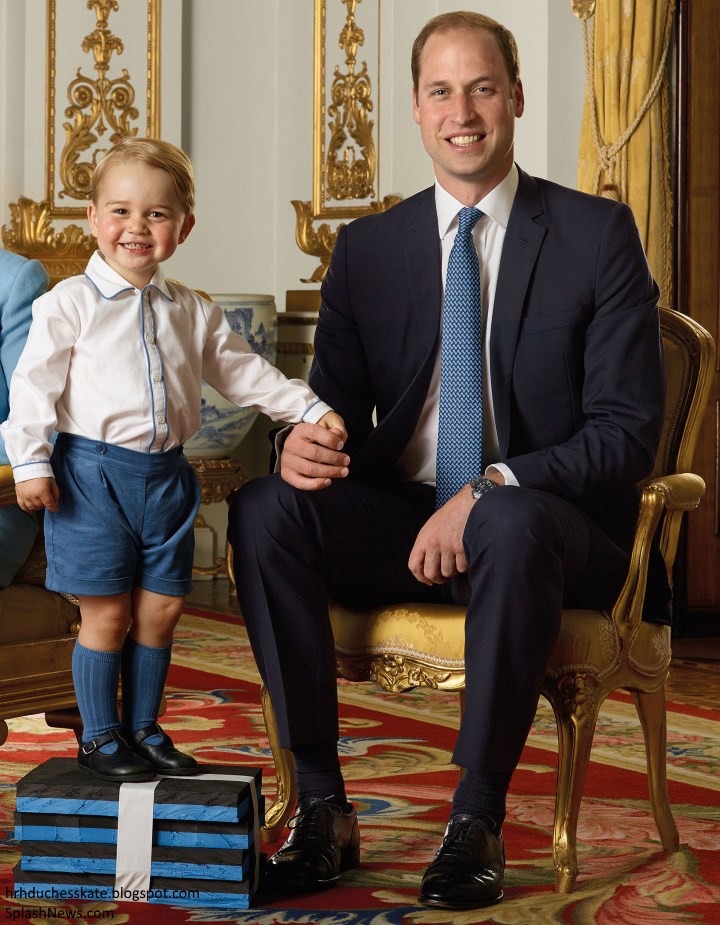 The photographer, who was sworn to secrecy and could not even tell his wife he took the historic photo, described young George as "on top form" during the shoot:

'"It's great just to be asked to photograph a stamp, never mind four generations of the Royal family. When I was asked about I was ecstatic but I had to keep schtum for 18 months," he said.

"It was an amazingly relaxing and light-hearted sitting. They were comfortable with one another and behaved like any family with their conversation and jokes. It was much more relaxed than when I've tried to take pictures with my family.

"The joy and energy coming out of George was fantastic. It lifted the whole shot and lifted the afternoon. He was on top form. He was quite fascinated by the lights. He took it all in his stride."'


Indeed, it was milestone moment for Prince George, who turns three in July, posing for the first of many postage stamps he will feature in throughout his life. The commemorative first class stamps will be sold in sheets of four for £2.56 with a stamp featuring the Queen, Charles, William and George on each sheet. For example, if one wanted five Prince George stamps, they would have to purchase five full sheets.

They are available to order on the Royal Mail website.

'If monarchy stands for anything, it is continuity and stability. And this superb image, captured in the White Drawing Room of Buckingham Palace by Royal Mail photographer Ranald Mackechnie a few months ago, reinforces that. Think of it this way. When Prince George is celebrating his own 90th birthday, it will be the year 2103.

And the world will look back on this image of four monarchs stretching over two millennia, three centuries and 177 years, going all the way back to the birth of Princess Elizabeth of York in 1926.

We have regularly seen stamps marking important royal birthdays (though the Queen rejected a set to mark her 70th on the grounds that it was a lot of 'fuss' about nothing). But few have been quite as eye-catching as this collection, partly because a British monarch has never celebrated a 90th birthday before.'


A further six stamps are also being released to mark the Queen's birthday; an excellent selection of photos were chosen to represent various stages of her life. They show the Queen: as a young Princess Elizabeth with her father, then the Duke of York in around 1930; attending the State Opening of Parliament in 2012; with Princess Anne and Prince Charles in 1952; visiting New Zealand in 1977; with the Duke of Edinburgh in 1957; and riding in an open top carriage with Nelson Mandela in 1996. The set of six is available for £6.48 on the Royal Mail website. 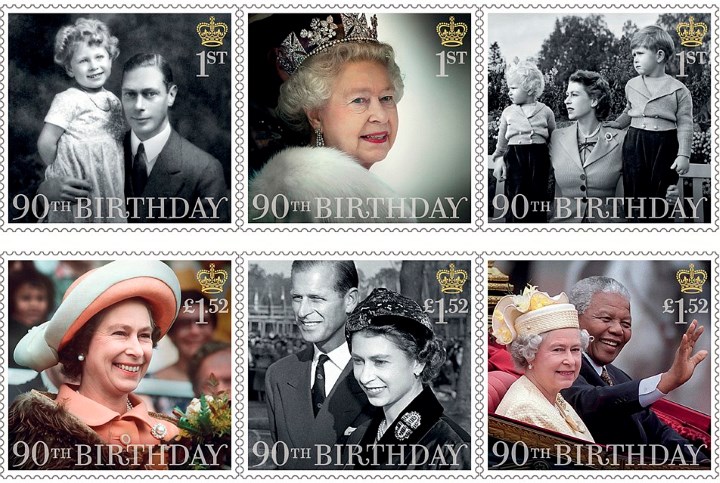 The photo graces the covers of several newspapers today.


Of course, readers will recognise Prince George's Rachel Riley outfit - it is the same one he wore for Kate's photos of him and Charlotte taken at Anmer Hall around the same time as the photo for the stamp.


George also wore the Cord Short and Shirt Set to meet his sister at St Mary's Hospital in May. The $159 set is described as: "A smart shirt and cord short set comprising a classic white shirt with blue piping detail with matching blue babycord turn-up shorts with an elasticated back waist, attached to the shirt with pearl effect buttons. Perfect for a special occasion. Pair with one of our baby boy Heritage cardigans." Once again, it was teamed with his Amaia Kids socks. 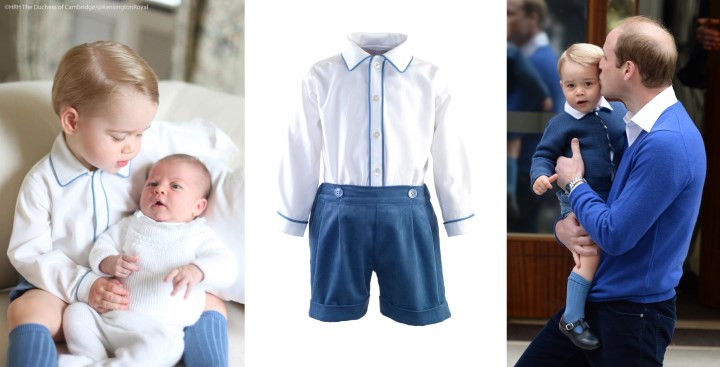 The stamps are a fantastic keepsake to mark the occasion, and how lovely to see Prince George with his Gan-Gan. :) 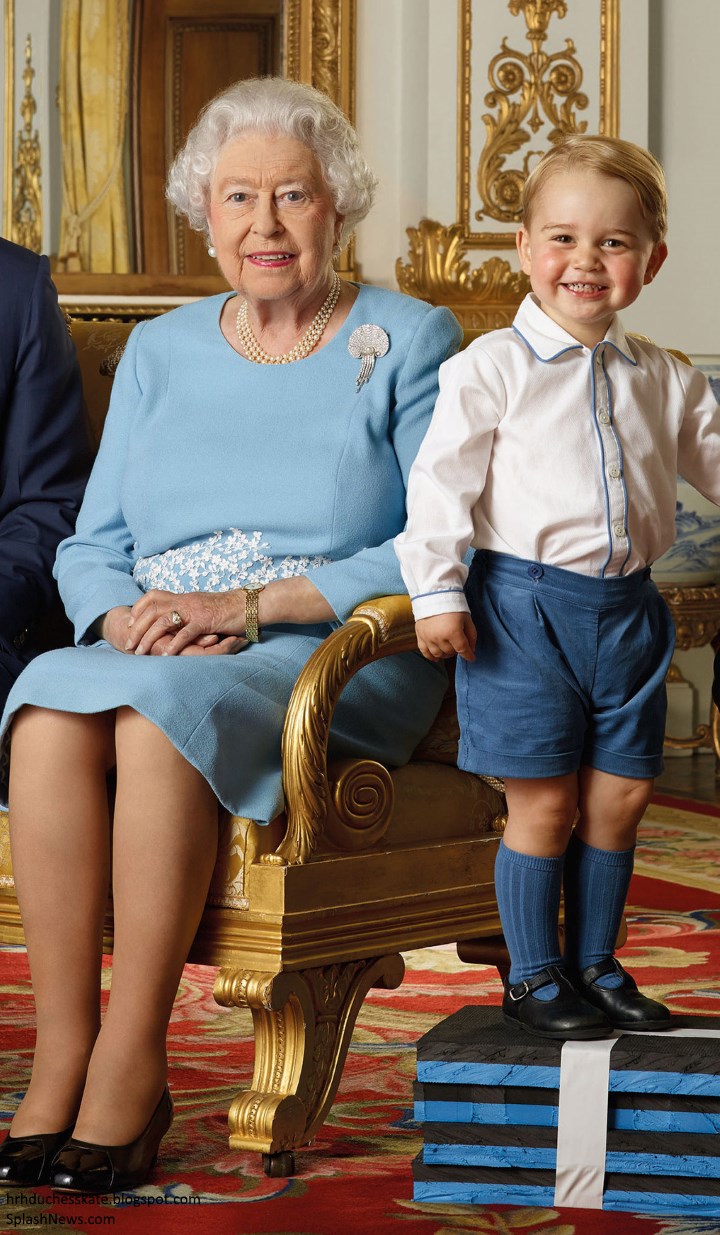 We have one more update to share with you tonight. The Duke and Duchess of Cambridge enjoyed a private evening with the King and Queen of Bhutan. The couple were photographed leaving their hotel with Kate wearing the Tory Burch Floral Mesh Gown. Earlier today an image from the evening surfaced. 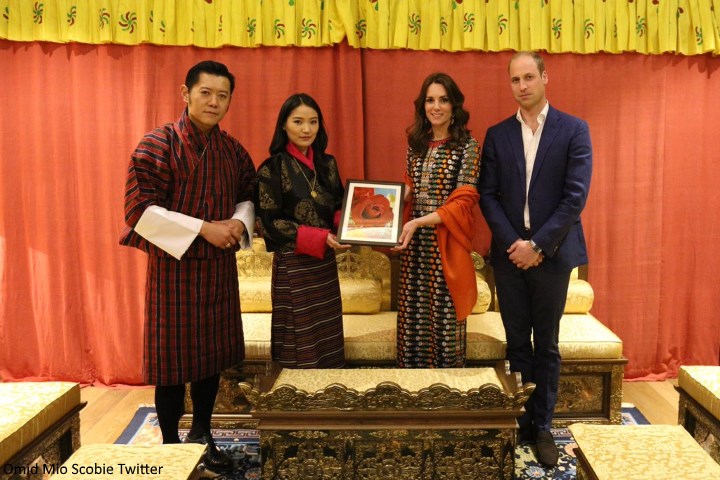 It turns out William and Kate presented the Queen with a very thoughtful gift. More from Hello! Magazine:

'It has now been revealed that during the audience in Thimphu, William and Kate showed their gratitude to the royals by giving the 25-year-old queen a framed picture of a rose.

The red flower is aptly named the 'Queen of Bhutan Rose' and was developed as a special gesture for the king and queen, who founded the annual Royal Bhutan Flower Show last year and have created an English garden. The rose variety has been grown in the UK and 75 dormant plants have been shipped to Bhutan to be cultivated, a statement from the Foreign Office revealed.'


Minister for Asia, Hugo Swire said: "I am delighted that Their Royal Highnesses have been able to present this rose to the King and Queen of Bhutan as a symbolic gesture of the growing friendship between our two countries." Of course, we know Queen Jetsun gave Kate a lovely gold necklace during the evening which she wore the next morning at Paro Airport. Simply Bhutan shared more about the symbolism of the piece: "This is 1 of the 8 auspicious symbols in Buddhism and symbolises union of wisdom and great compassion."

We expect we may very well see more photos released to mark the Queen's 90th over the next day or two - most notably a rumoured photo of HM with her great-grandchildren taken by Annie Leibovitz.
Posted by Admin at 02:07:00