Fresh from their early morning safari at Kaziranga National Park, it was a quick change of clothes for the Duke and Duchess before they set off for their afternoon engagements. 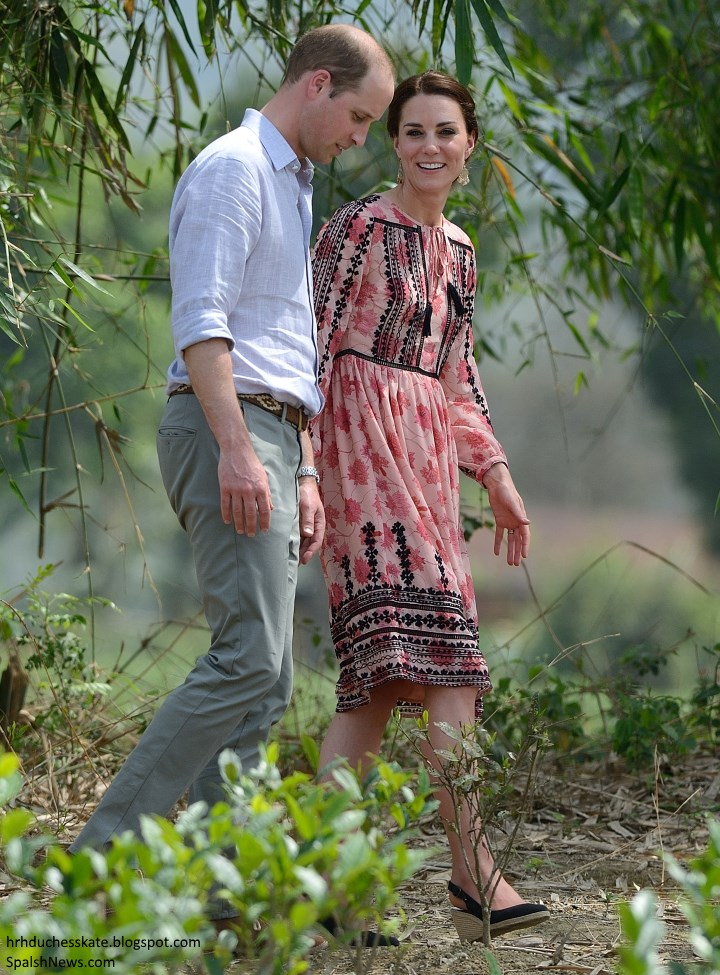 William and Kate travelled to nearby Panbari village where took a walk in the picturesque tea garden. 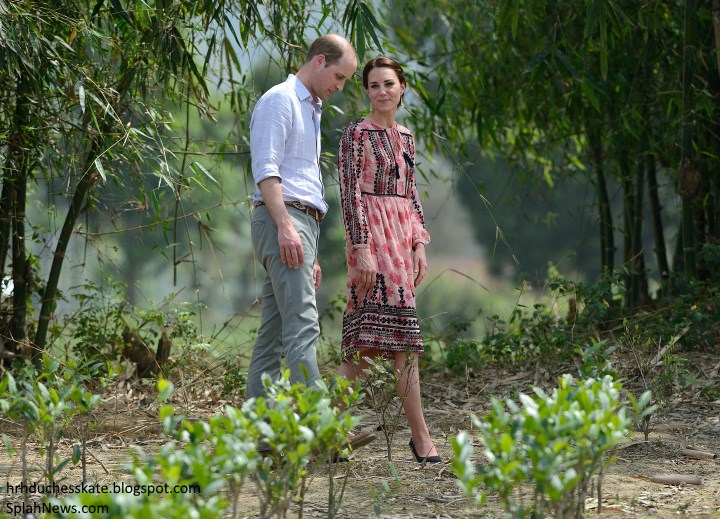 Kate received a very warm welcome from a young girl in the village. 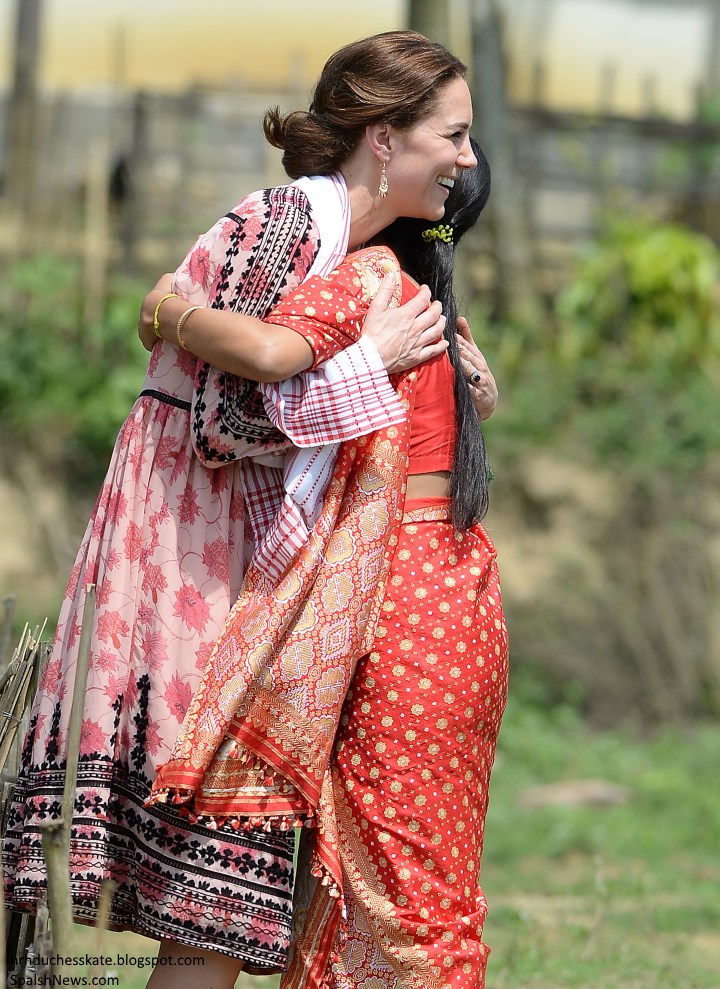 It was a lovely moment. 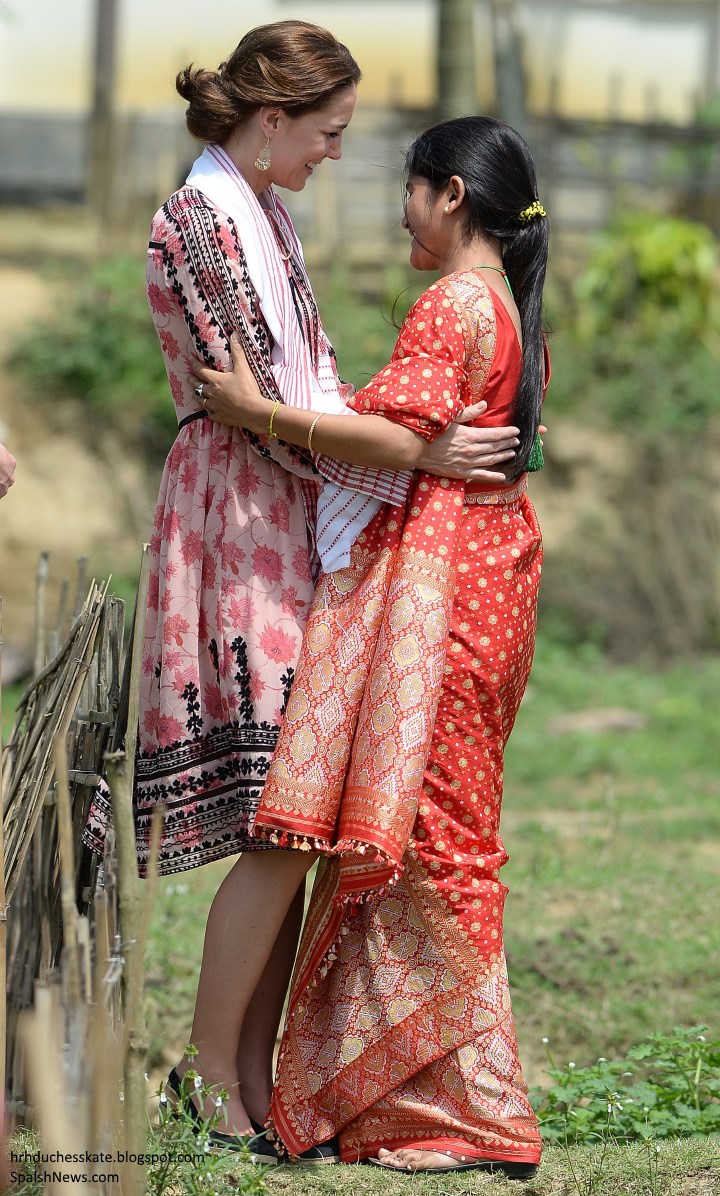 There was great excitement in the village ahead of the royal arrival. 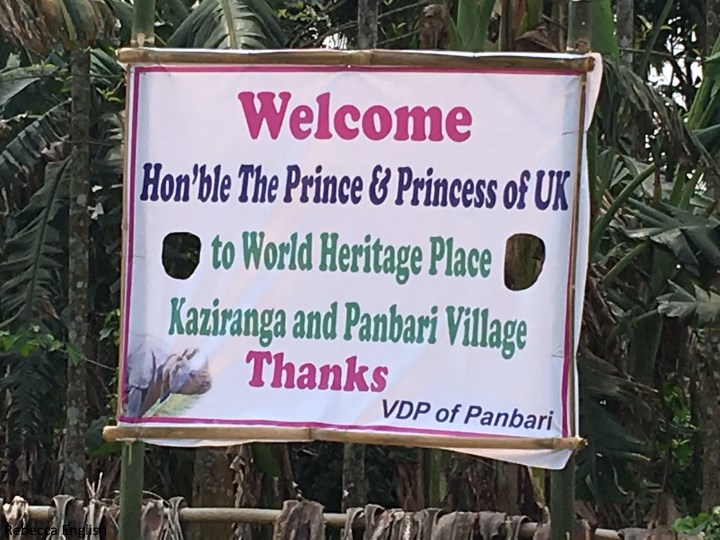 Rebecca English shared a photo of an adorable little girl waiting to meet William and Kate. When Rebecca took her photo she was so excited to see her picture on the phone, she blew herself kisses. :) 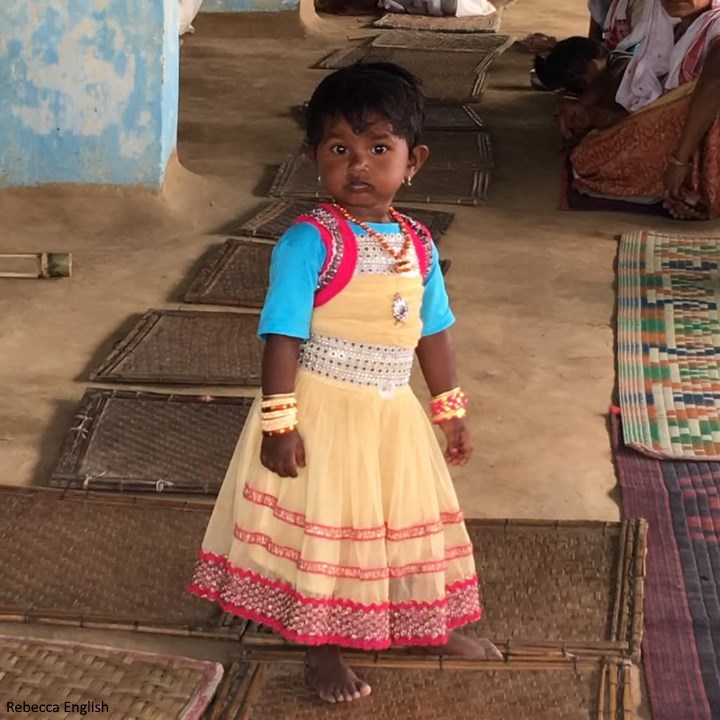 The Duke and Duchess met the community. 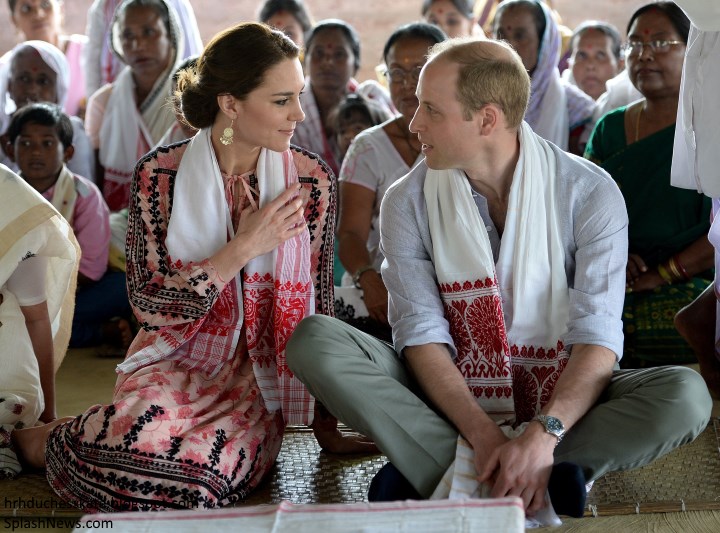 Kate told elders at the village that she and William left Prince George at home not because of the heat but because he is "too naughty". The couple joked he would be "running around" the village and promised to bring him and Charlotte with them the next time they visit India. 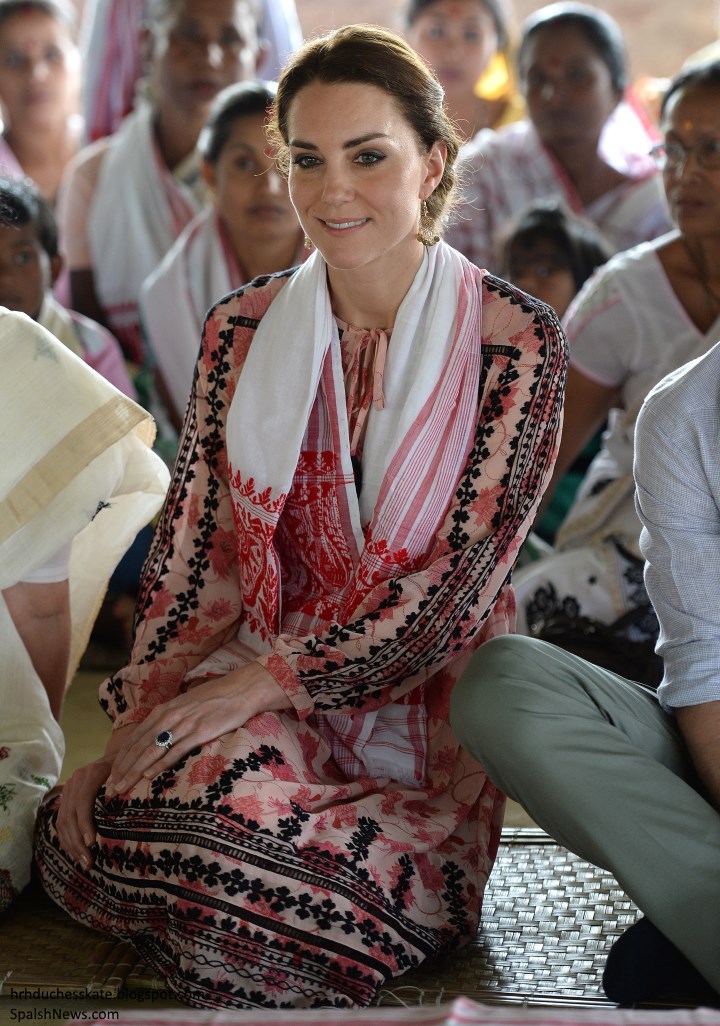 The Duchess told children at a village in the wildlife park that she was "sad" because she was missing her children. She said that seeing little girls dancing in the village reminded her of Princess Charlotte. 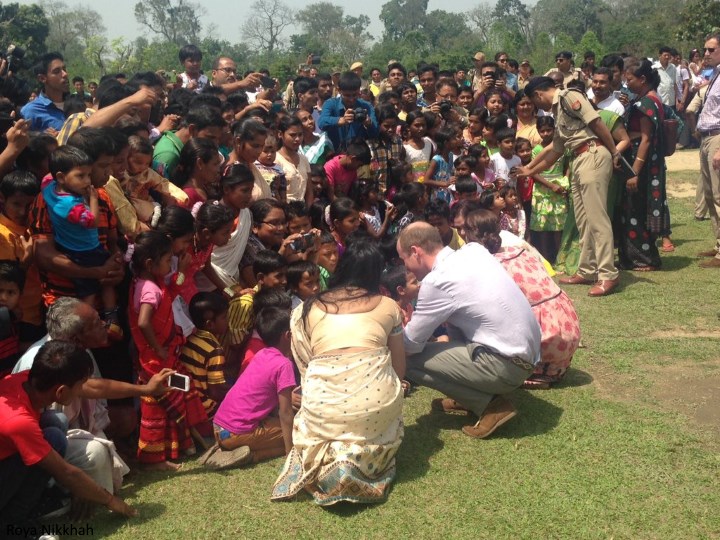 Next, they visited the Centre for Wildlife Rehabilitation and Conservation. The centre provides emergency care and rehabilitation to wild animals that have been injured, displaced, or orphaned. With a strong re-release rate of 60%, it has rehabilitated thousands of animals including hand-raised elephants, rhinos, and bears. 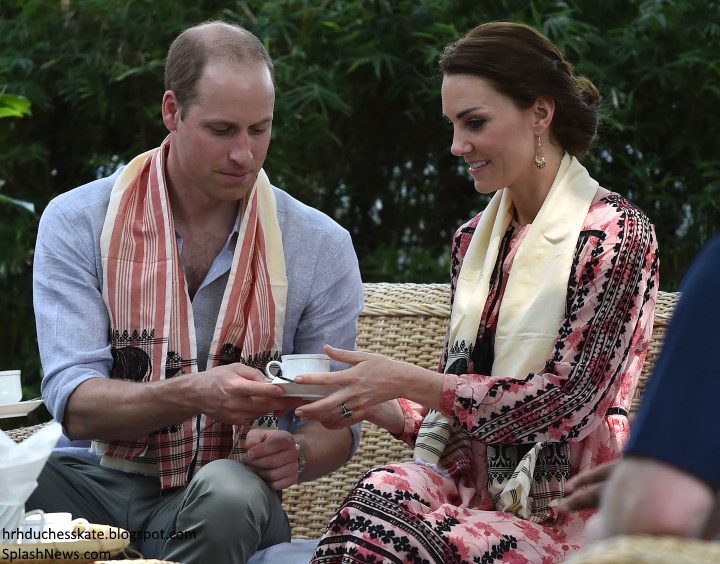 The Duke and Duchess took tea with staff. 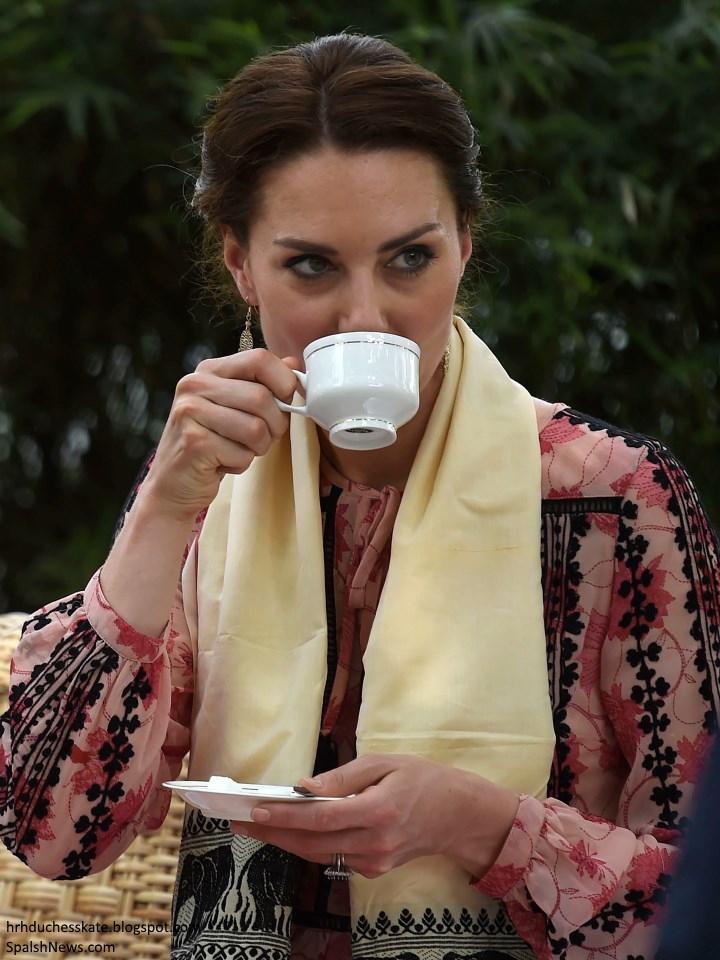 Statistics are displayed outside the centre. 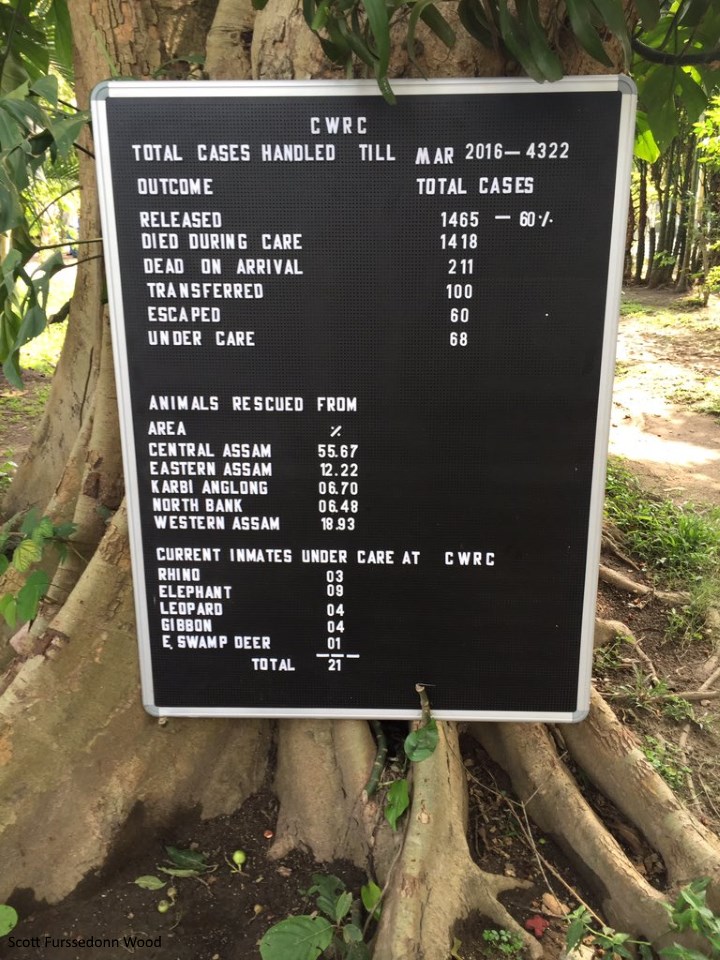 The Duke and Duchess met young filmmakers who are members of Green Hub, a project that teaches film-making as a vocational skill to young people across Northeast India. 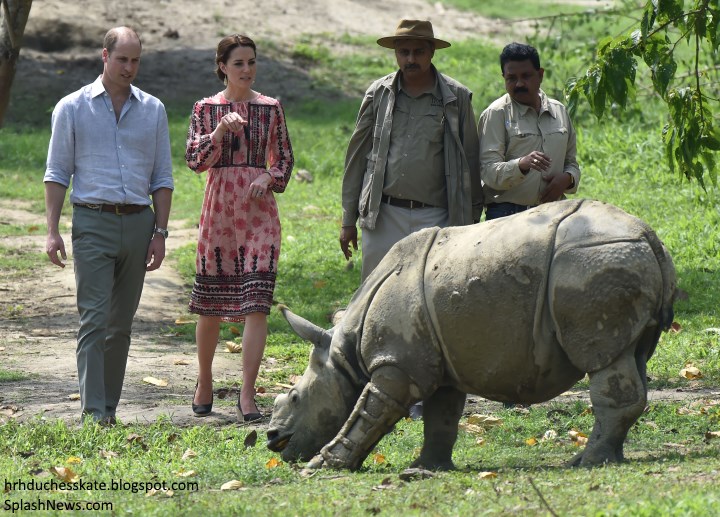 William and Kate thoroughly enjoyed spending time with the animals. The centre is also home to rescued leopards which sadly cannot be re-released from the site and have to be rehomed in sanctuaries and zoos in other locations, mainly in India. William and Kate were thrilled to be given the opportunity to feed the animals. 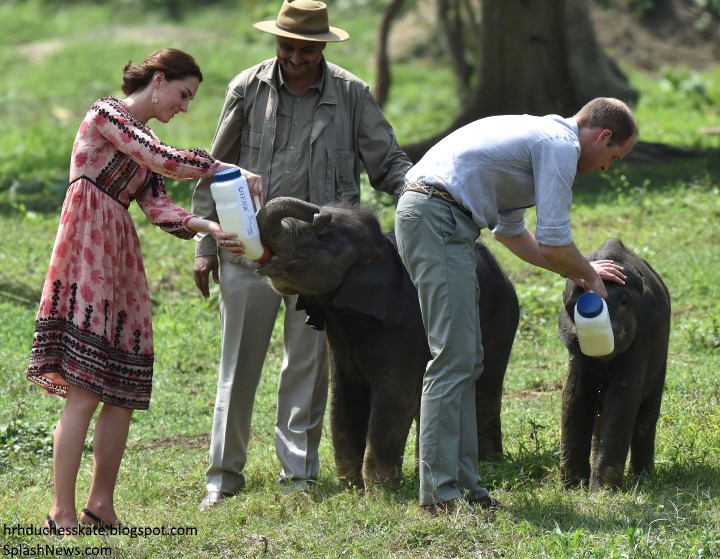 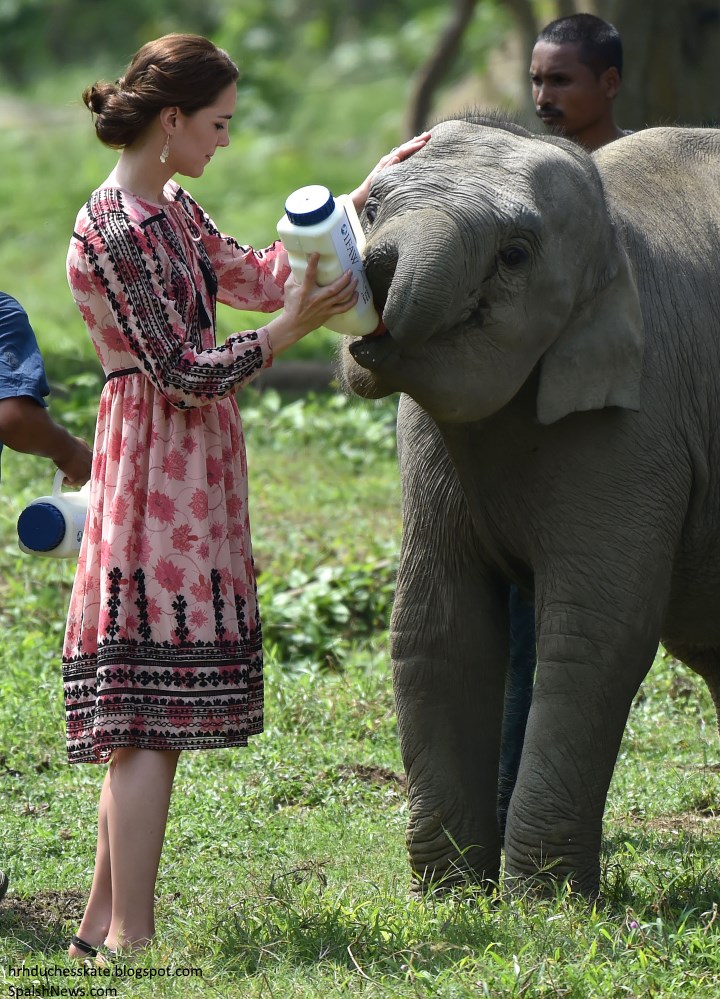 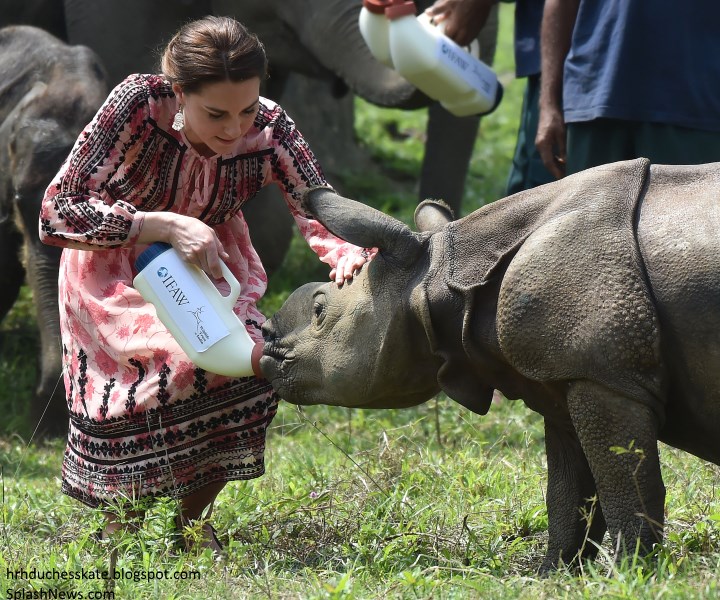 After visiting CWRC, the Duke and Duchess travelled across the road to the Kaziranga Discovery Centre, which was built by Elephant Family, the charity founded by Mark Shand, late brother of the Duchess of Cornwall. Elephant Family has funded over 150 field projects since they began and are currently active in six of the 13 elephant range states:  India, Thailand, Indonesia, Myanmar, Cambodia and Malaysia. They are committed to putting the Asian elephant on the map, influencing and engaging governments and corporations, and powering the best in-country conservation projects. 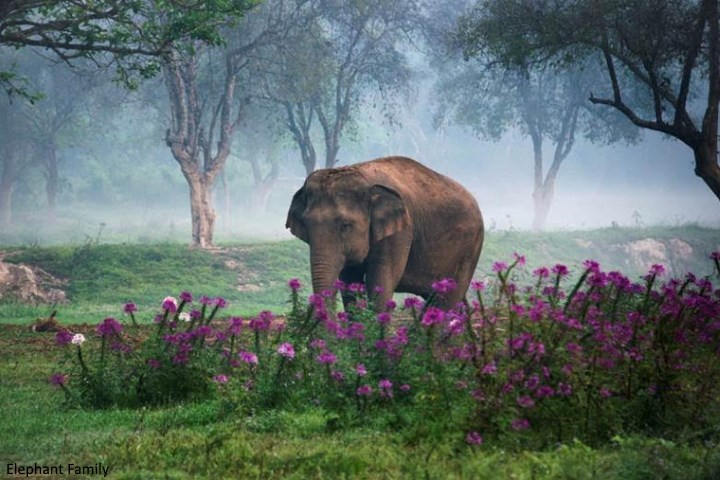 Prince Charles and the Duchess of Cornwall share a joint presidency of Elephant Family. Writing about her brother and Elephant Family co-founder, Mark Shand, in The Times newspaper on 11 September, the day of his memorial, the Duchess talks of Mark’s extraordinary legacy: "A legacy which as co-presidents of Elephant Family, my husband and I will strive to fulfil. They say elephants never forget, Tara never forgot him and neither will we." Tara is one of the most famous Asian elephants in the world and the heroine of Mark Shand’s epic tale Travels on My Elephant. He bought Tara and his bond with her inspired him to set up Elephant Family. 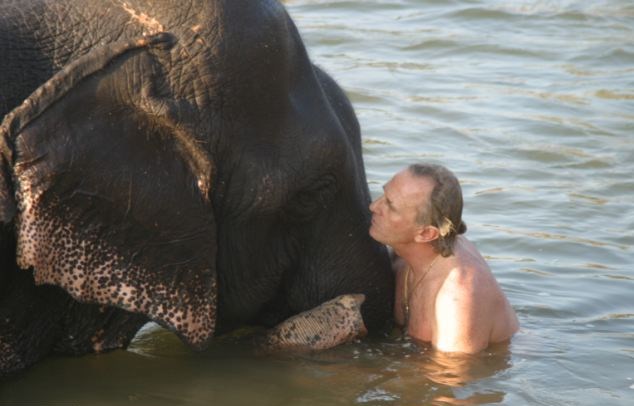 William and Kate put the finishing touches on an elephant sculpture to officially mark the ‘call for artists’ for India’s elephant parade, which will see 200 elephants decorated by artists and placed in 200 locations across India by the Elephant Family. These parades have previously been staged in London, Edinburgh and New York. 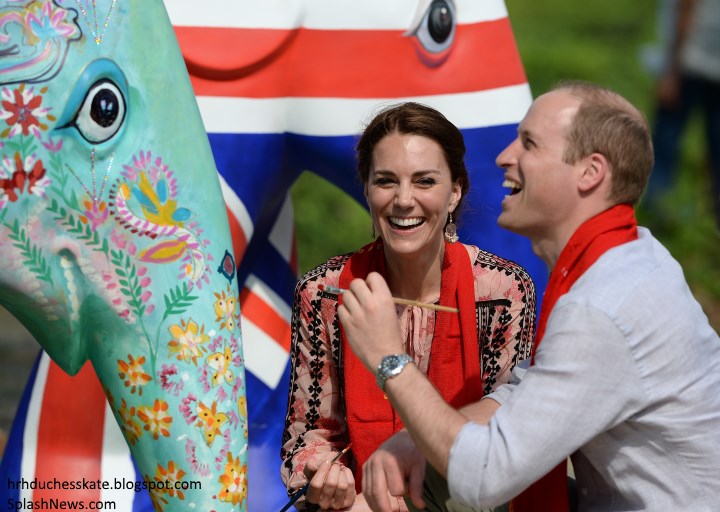 A look at William and Kate's artwork. The Duchess was pretty in the Pink Print Embroidered Midi Dress from Topshop. It's the latest in a long line of beautiful print dresses Kate has debuted throughout the tour. It is described: "Boho-chic details define a midi-length dress in a pink-tone print accented with black embroidery, including open ladder-stitch insets. Tassel-tipped ties hang from the keyhole neckline."


It's available for $140 at Nordstrom with Free Shipping, and for £75 at Topshop in limited sizing. As of writing, it's also in stock at The Bay. 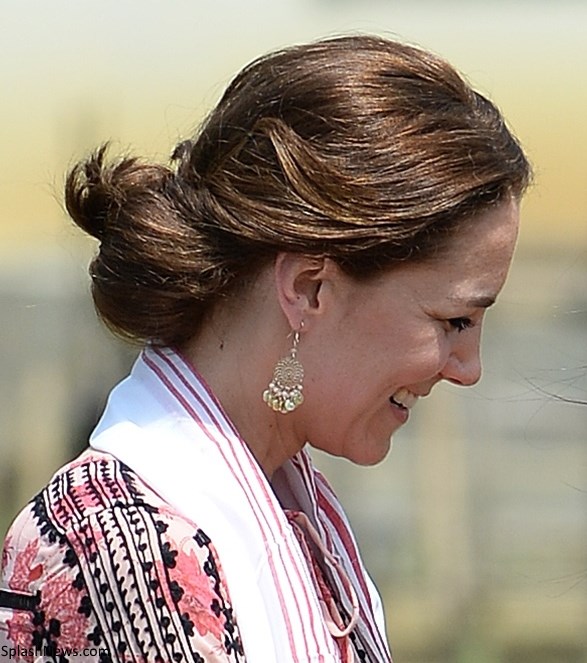 
It was an absolutely fantastic day. One of the reasons I love royal tours so much is the complete contrast of events. One day there's a glittering gala and another a day like today. Combining the breathtaking scenery of Kaziranga with William and Kate's incredibly warm greeting from locals, and of course feeding the elephants and rhinos, provided photos which will be looked at for many, many years to come. This has been a fantastic royal tour thus far! William and Kate will enjoy a little down time this evening following a hectic few days - most likely a private dinner and perhaps a stroll to take in the scenery. 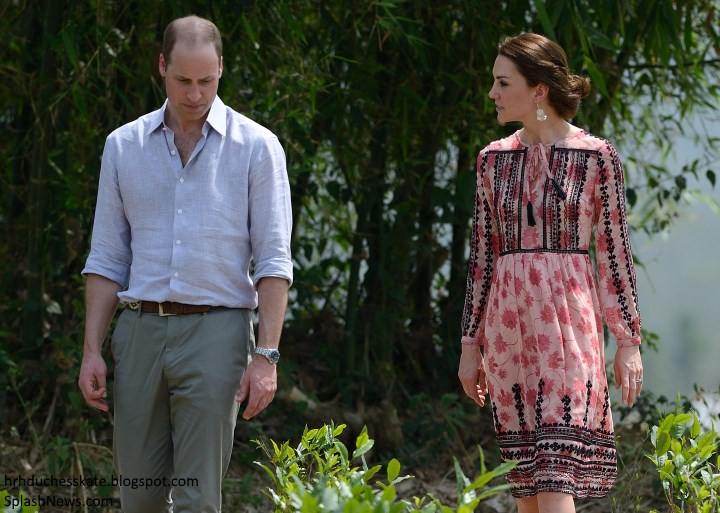 Tomorrow the Bhutan leg of the tour kicks off; below a quick recap of Kate's looks in India. Kate chose a red printed bespoke McQueen dress, a colourful print Anita Dongre look, and a sparkling sapphire-blue Jenny Packham for day one. It was ivory Emilia Wickstead and the Temperley London Delphia crop top and maxi skirt for day two. The third day of the trip saw Kate donning three beautiful dress: the Red and Navy Glamorous Maxi Dress, the green lace Temperley London Desdemona, and the colourful print Anna Sui Maxi Dress. Today, Kate started the day off in a RM Williams shirt and Zara Pants before changing into the Topshop Embroidered Smock Dress. 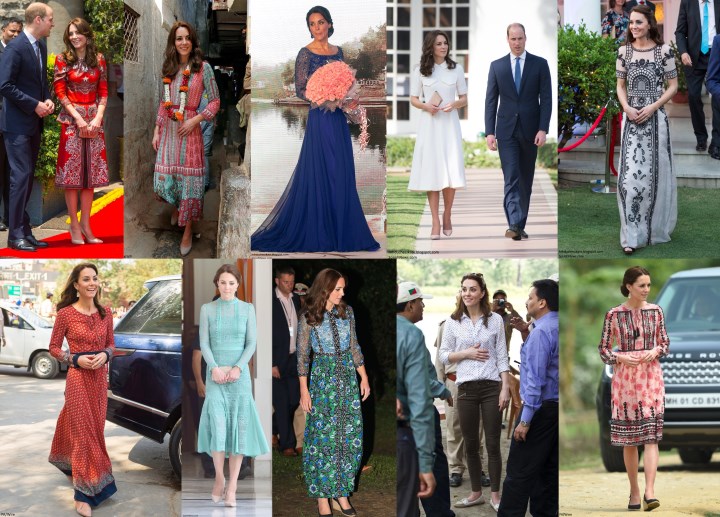