Kate in Colourful Anita Dongre Tunic for Engagements in Mumbai

Following their arrival at the Taj, the Duke and Duchess travelled to one of Mumbai's most famous public spaces, Oval Maidan. 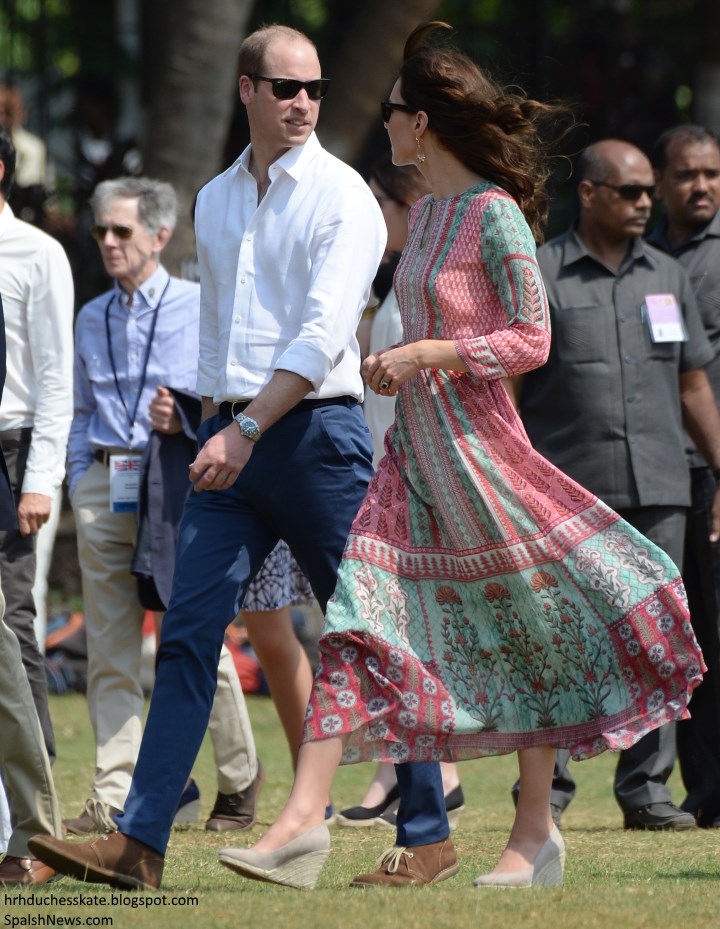 The Palace promised 'surprises' were in store at the venue and we were not disappointed with an afternoon of sporting activities. 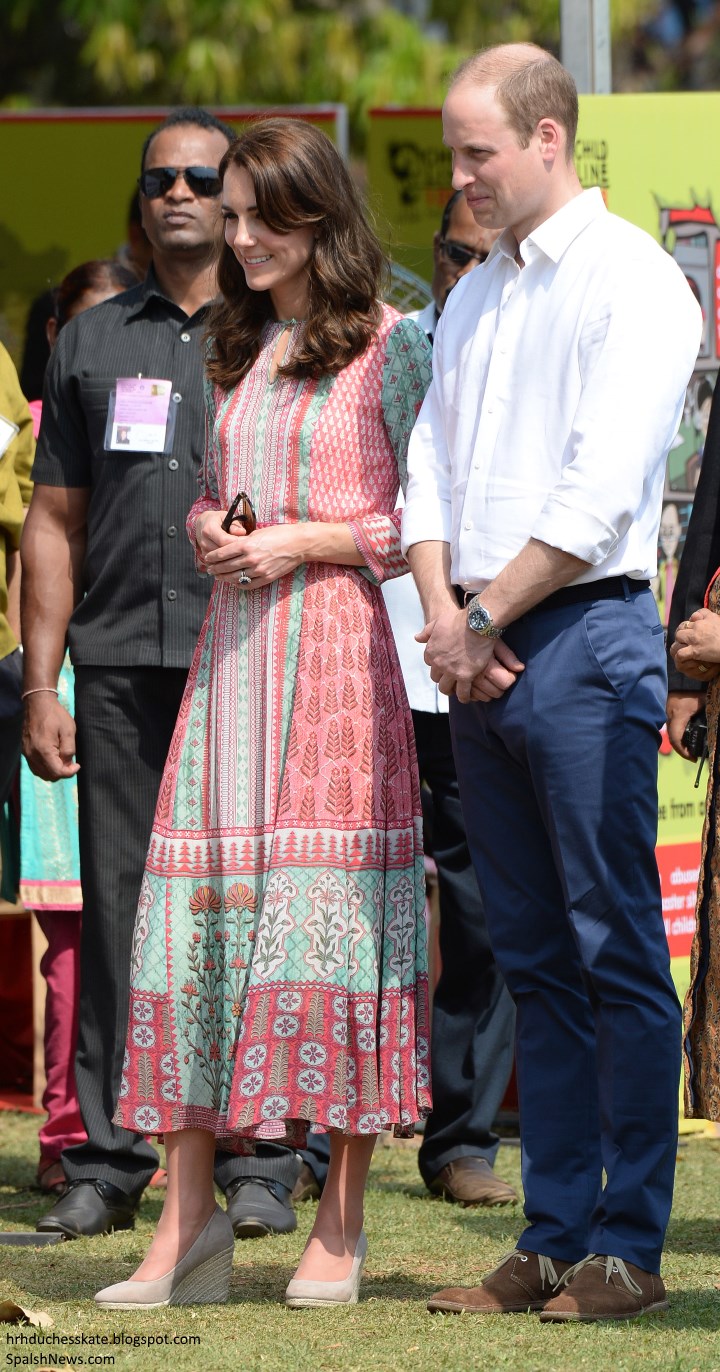 Named because of its oval shape, the large Grade I listed recreational ground hosts a number of popular sports including cricket and football . It is considered one of the most popular gathering places for locals and boasts stunning views of the city's skyline. It's a must-see for tourists and was the perfect place for William and Kate to greet Mumbai. 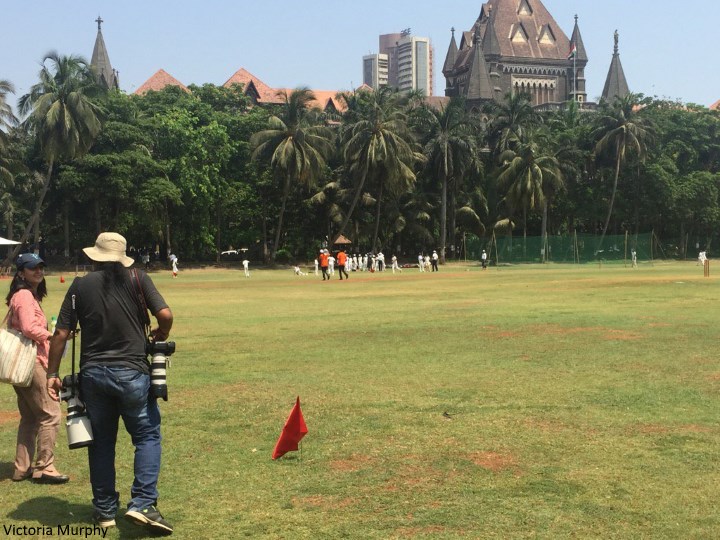 The Duchess was very much in her element as the cricket got under way. 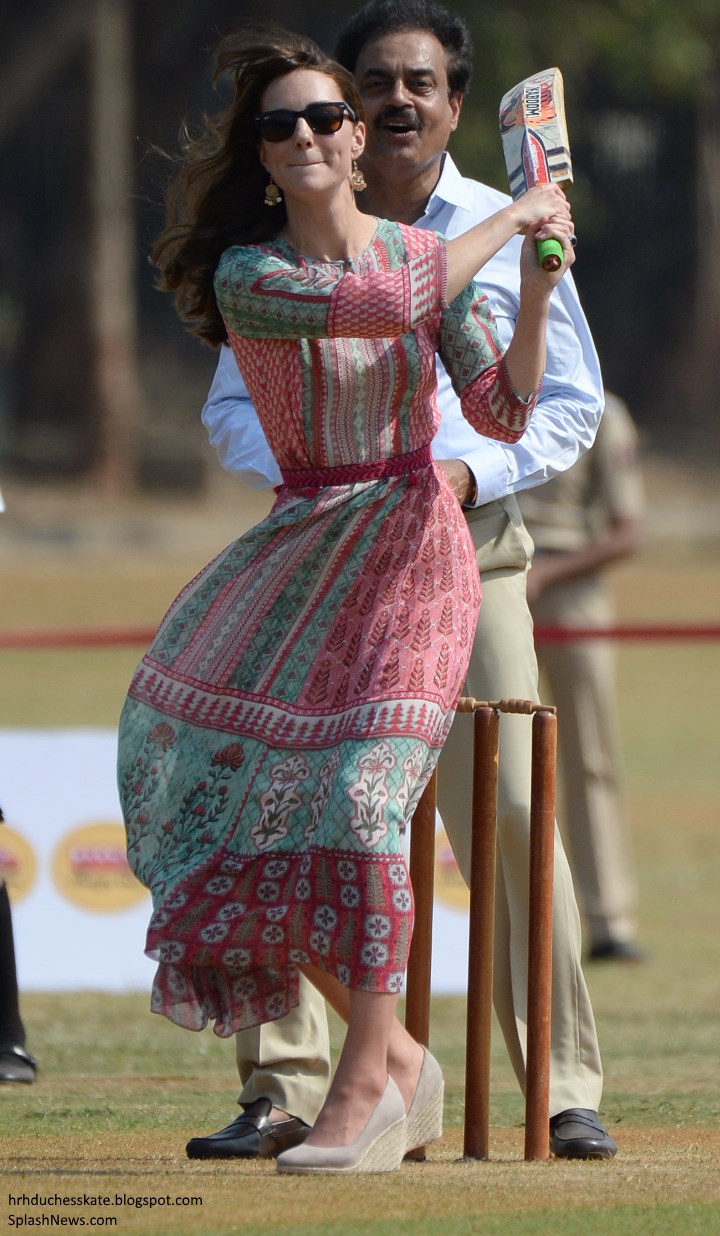 Of course, this brings back memories of the 2014 Royal Tour when Kate tried her hand at the sport in her red Luisa Spagnoli suit. 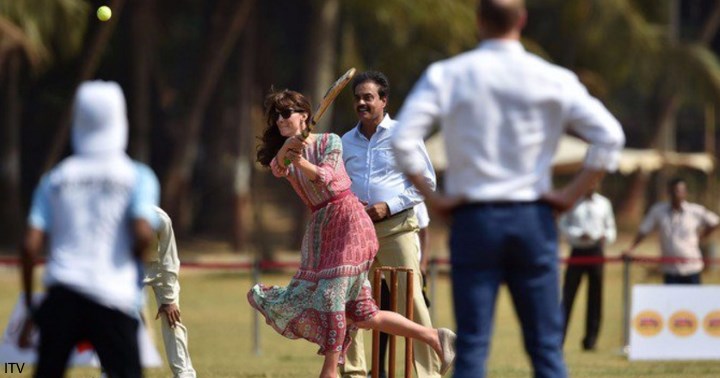 Who better to enjoy a game of cricket with than legends Sachin Tendulkar and Dilip Vengsarkar.

Off to a running start.

William and Kate played with children who live in slums around the city. The children were all incredibly excited ahead of the visit. 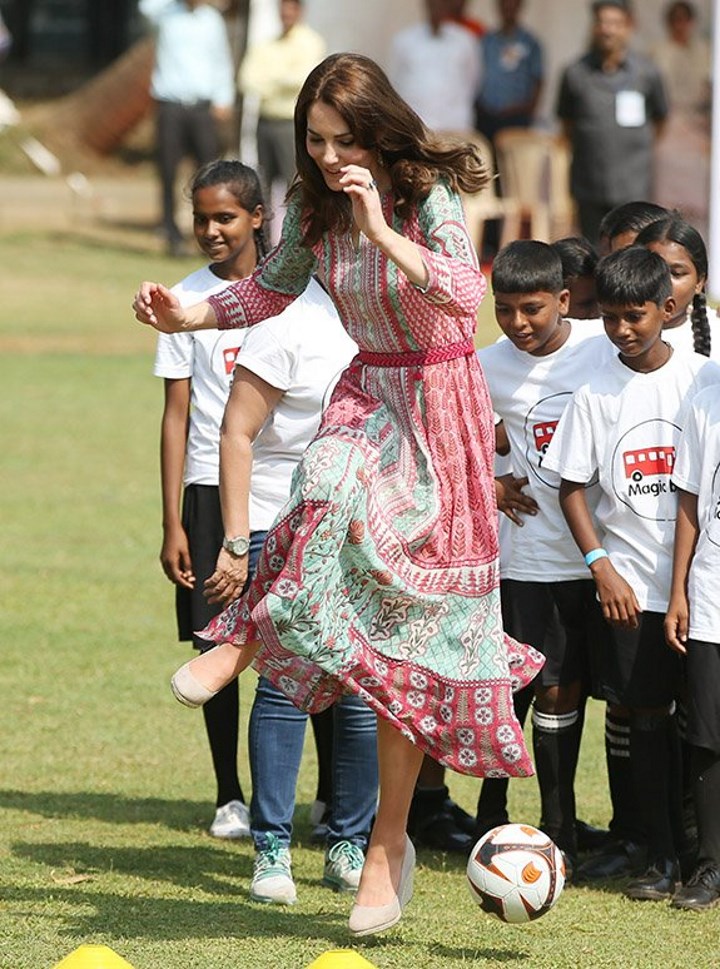 Kate appeared to be having a fantastic time.

The Duke and Duchess met with representatives and beneficiaries from local charities Door Step, Magic Bus and India Childline. 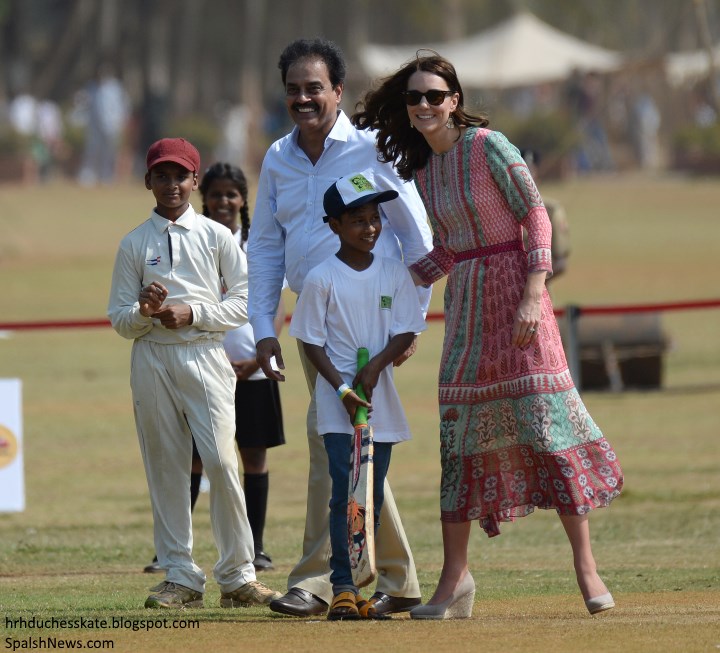 Door Step School was established in Mumbai n 1988 with the aim of providing literacy to marginalised sections of society. It was built to focus on three problems: non-enrolment, wastage and stagnation. The Right to Education Act mandates free and compulsory education to all children in the age group of 6-14 years, however, there are still a large number of children who do not go to school. Door Step School helps these children get enrolled in government schools in an effort to mainstream them into the formal education system. 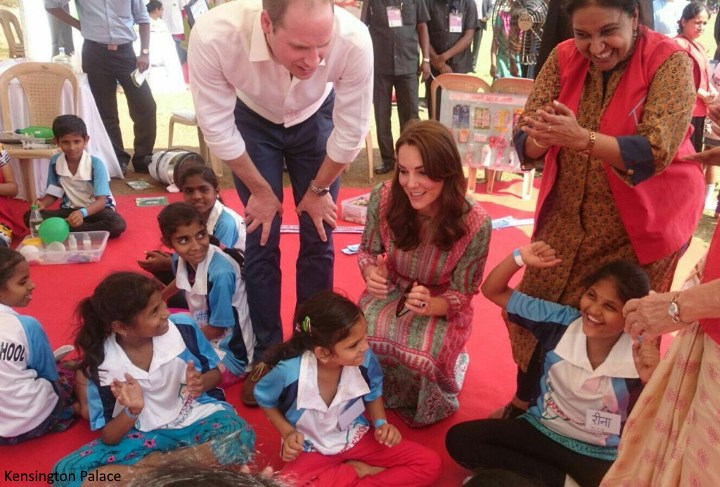 Door Step shared a photo of their tent at Oval Maidan. 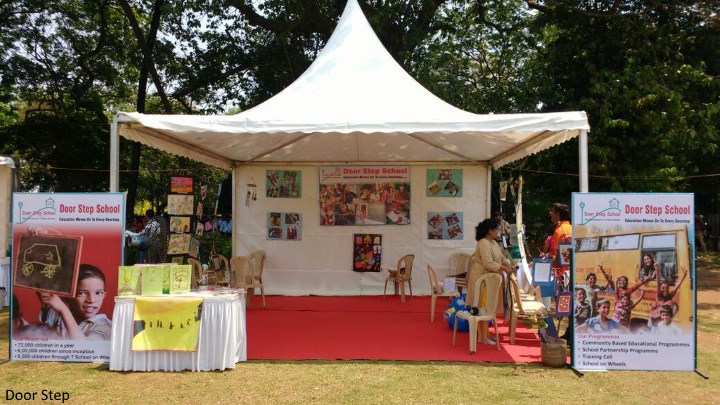 Magic Bus steers children towards a better life with awareness, life skills and opportunities. Their mentorship programme sees local youth volunteers trained to be mentors and role models to other children. They conduct ABC sessions and act as catalysts for community change. The children and youth grow up becoming confident, respected and responsible.

Those familiar with Childline in the UK will be familiar with the work carried out by India's Childline. Launched in 1996, Childline is the country's first toll-free tele-helpline for street children in distress. As of March 2015, a total of 36 million calls have been serviced by Childline operating in 366 cities and districts. 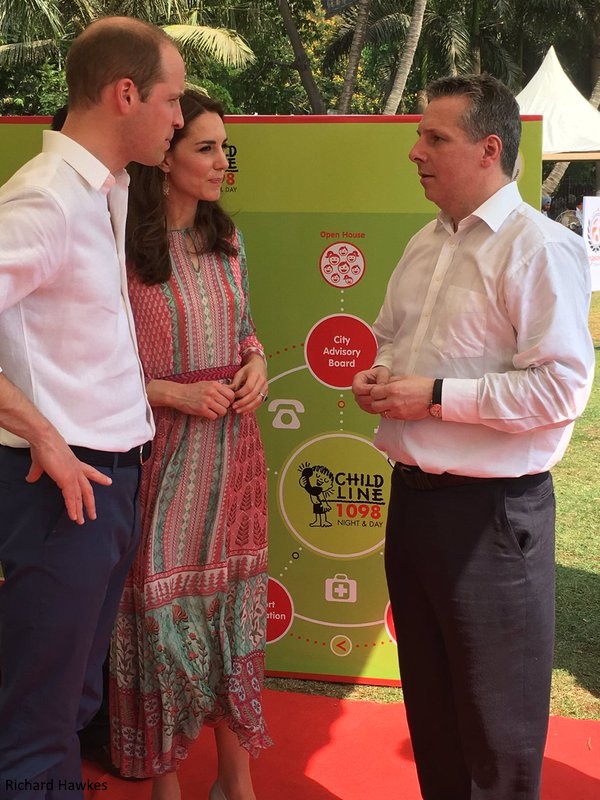 The Duke and Duchess signed a cricket bat. 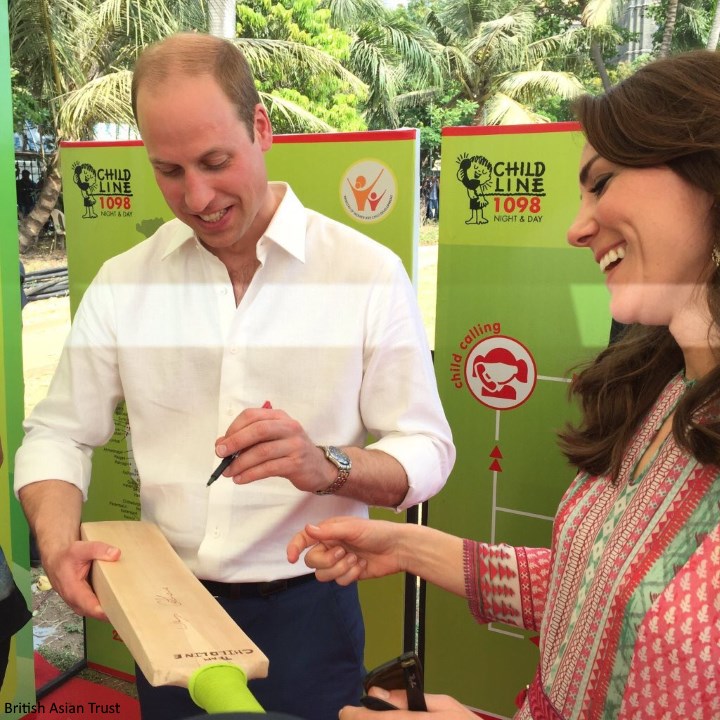 After their sporting events, William and Kate took an open-top bus tour of Mumbai with children from local charity Apnalya. The organisation works with the most marginalized people living in slums. 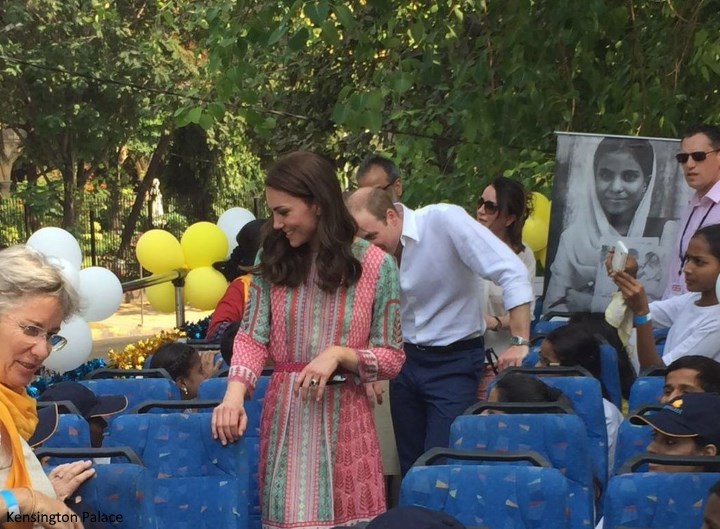 The couple chatted with recipients of the charity as they took in the surrounding sights. 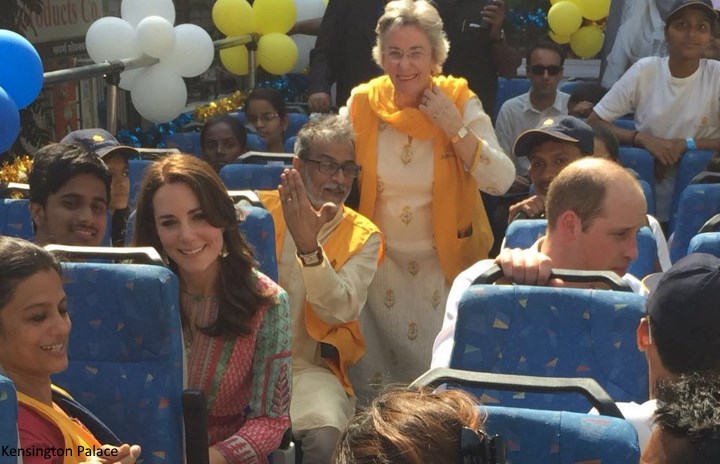 From here, the Duke and Duchess made their way to the Banganga Water Tank. Banganga is an ancient water tank in the Malabar Hill area of Mumbai. 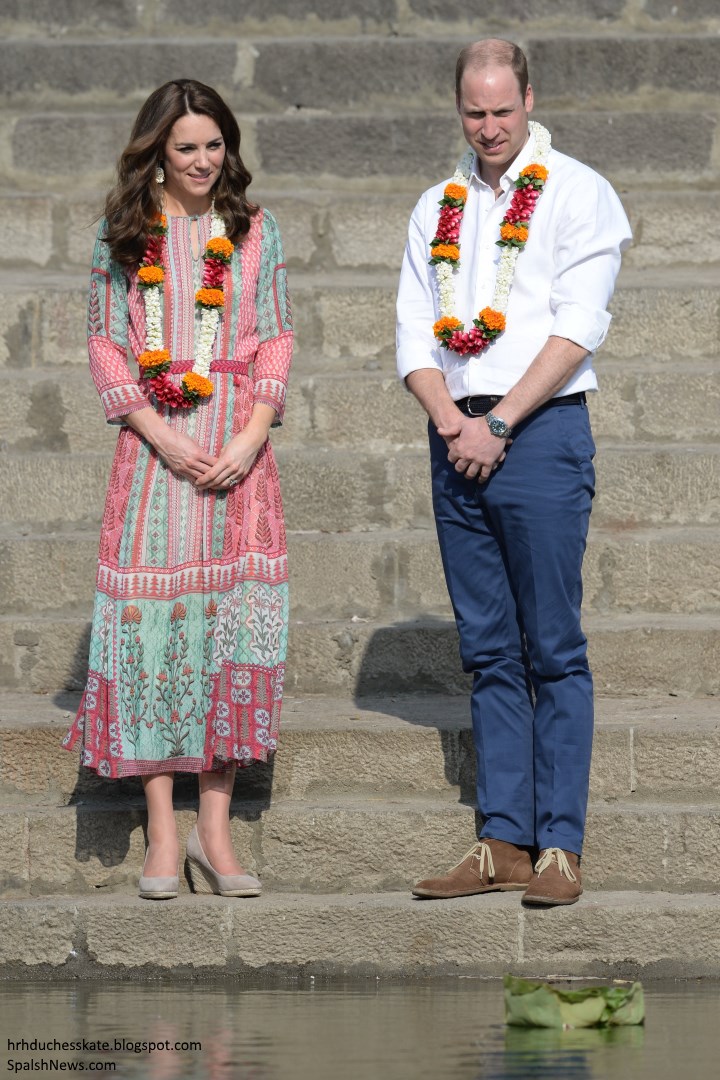 According to local legend, it sprang forth when the Lord Ram, the exiled hero of the epic Ramayana, stopped at the spot in search of his kidnapped wife Sita. As the legend goes, overcome with fatigue and thirst, Rama asked his brother Lakshmana to bring him some water. Lackshmana instantly shot an arrow into the ground, and water gushed forth creating a tributary of the Ganges, which flows over a thousand miles away called Banganga. 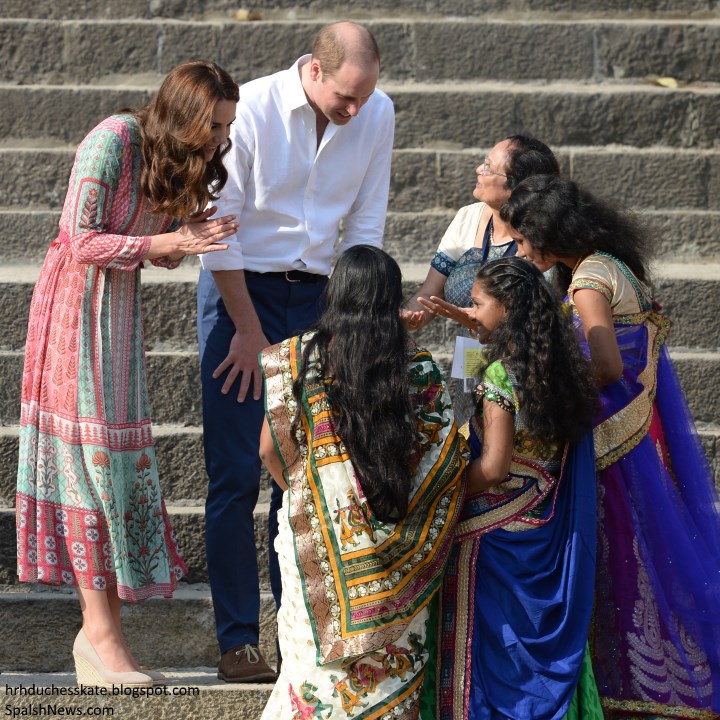 William and Kate placed petals in the water in a traditional ceremony. 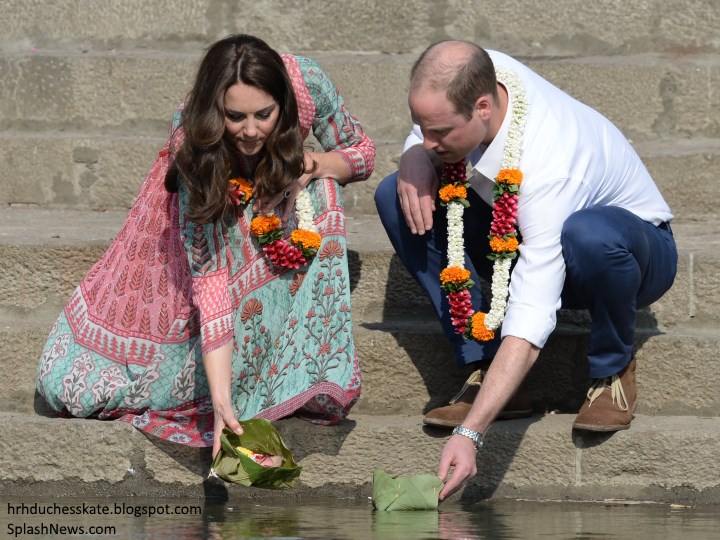 A beautiful shot of the couple wearing garlands. 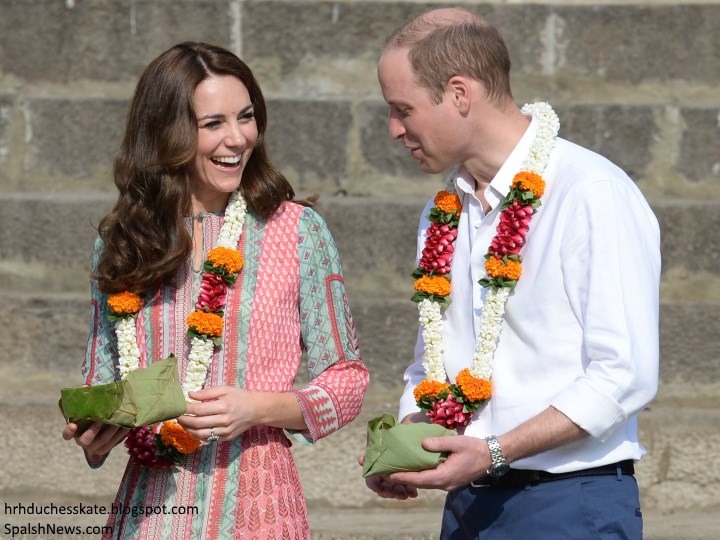 Richard Palmer shared this photo of the tank. 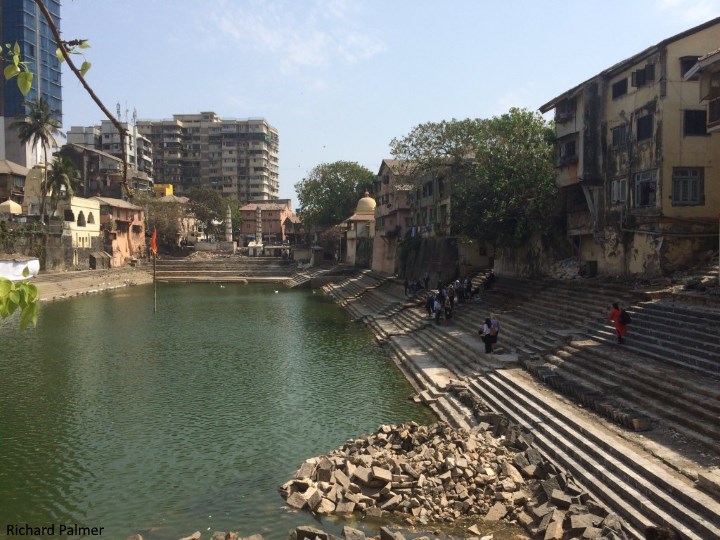 The couple then visited a slum. 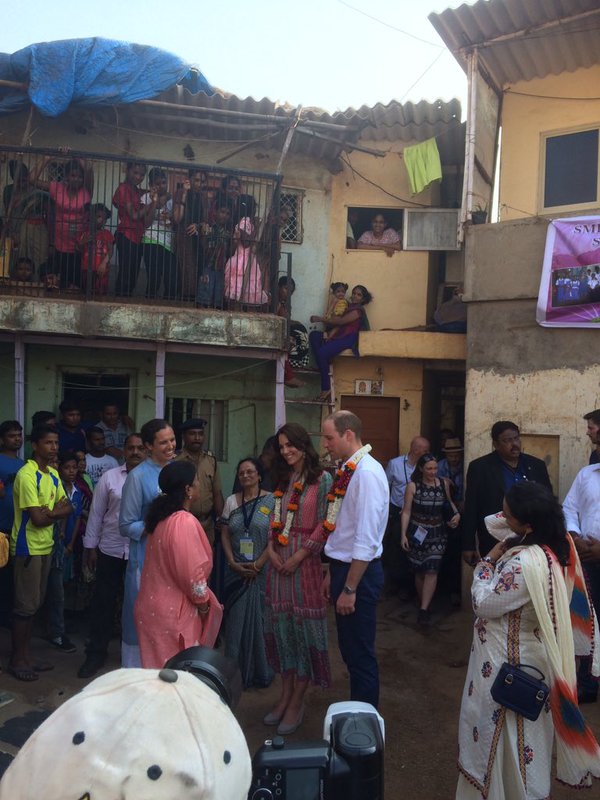 Kensington Palace said: "A visit here will allow Their Royal Highnesses to get a real sense of the complexity of this city. Alongside one of the most upmarket residential areas in Mumbai, they will see people who are living in tough circumstances in a small slum and are working hard to gain skills and make their way in the world." 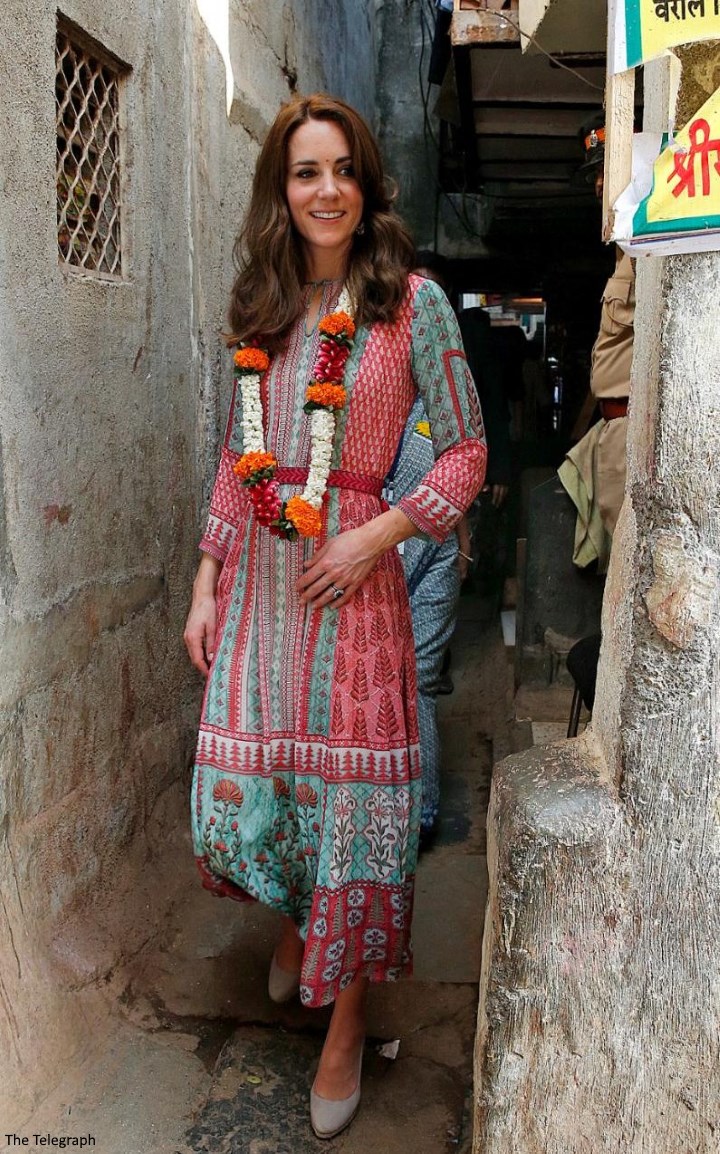 They met representatives of a charity called SMILE that focuses on skills and opportunities for young people and their parents. 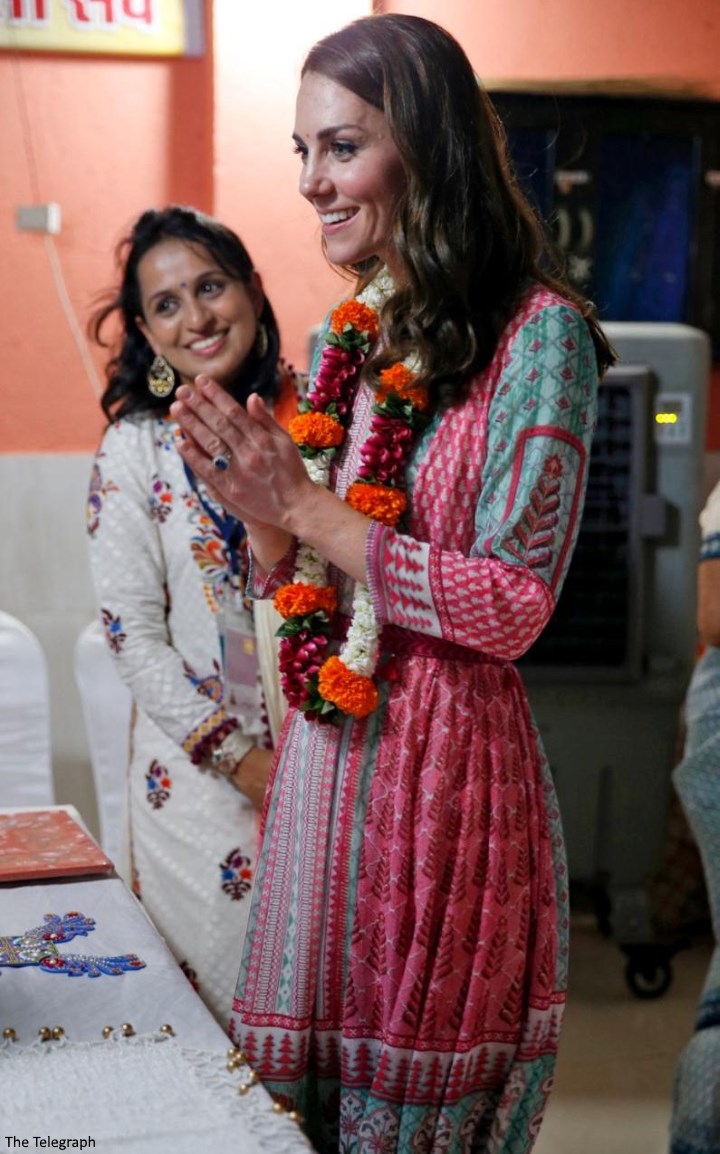 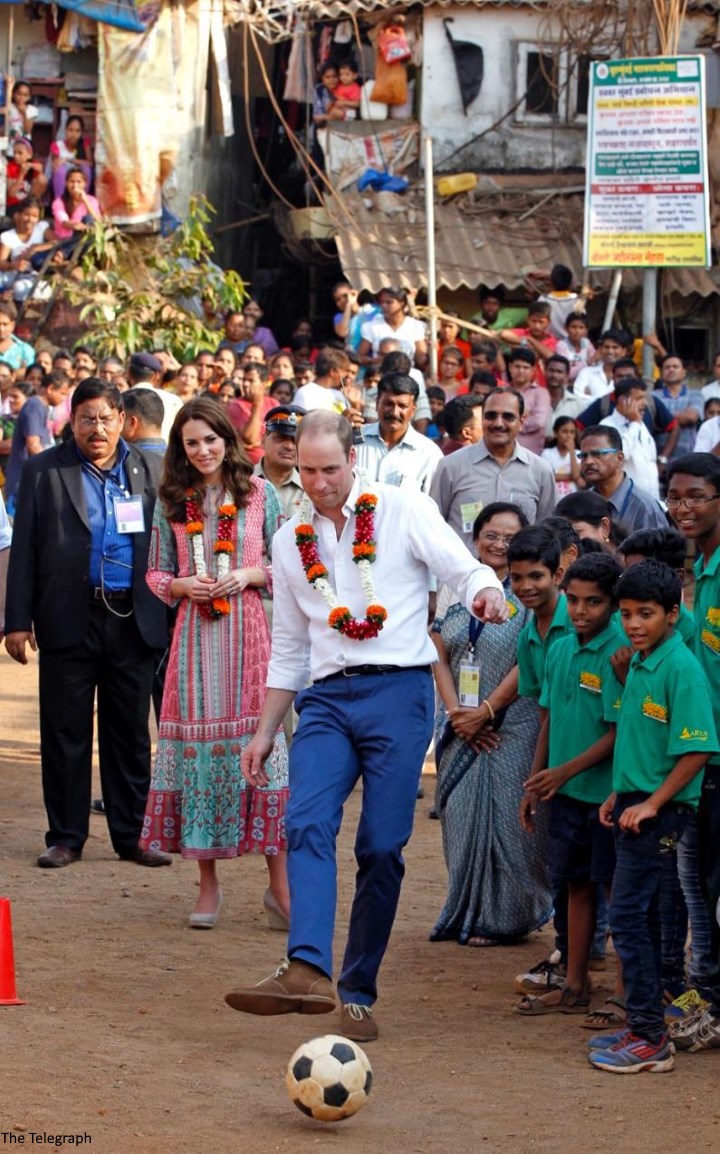 William looked very impressed with Kate's efforts. For her second look of the day, Kate chose a bespoke Mughal inspired tunic by Mumbai-based designer Anita Dongre. An aide said about Kate's dress by Mumbai designer Anita Dongre: "She wanted to wear a local designer at the earliest possible opportunity." It's wonderful to see the Duchess championing local brands and immersing herself in local fashion. The tunic was an ideal choice for the tour; the use of colour is fabulous.

The Gulrukh Tunic Dress is now available to order for $236. The product description notes the piece is "A classic composition of Jaipur-inspired motifs in a printed georgette tunic dress".


A look at the Summer/Resort 2016 style at Lakmé Fashion Week.


Launched in 1995, Anita Dongre has been at the forefront of fashion for over twenty years, having created one of the most successful fashion houses in India. A metaphor for supreme craftsmanship, Anita Dongre’s designs showcase Indian aesthetics in a contemporary language. Inspired by Rajasthan and India’s rich craft tradition, her hand-crafted creations are coveted by brides across the world, including Bollywood celebrities.


The Duchess debuted a new pair of wedges. 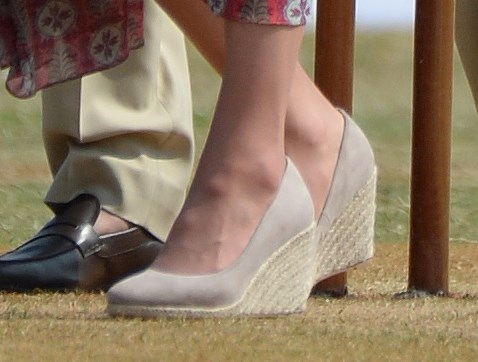 
The wonderful Anna identified Kate's pretty new earrings as the £8 (yes £8) Filigree Bead Short Drop Earrings by Accessorize. They are embellished with faceted beads and small, beaten coins. The U.K. website can be found here and the U.S. site here. 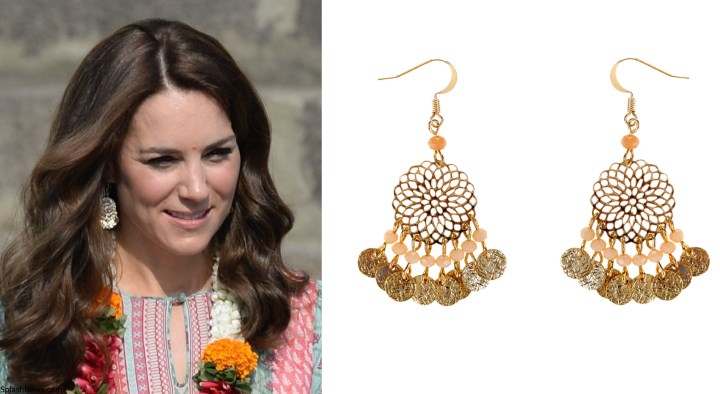 There's a very interesting video where Sachin Tendulkar talks about William and Kate. He described them as "remarkable and humble" available on YouTube. View a brief video from the cricket below!


Next, William and Kate will attend a glittering gala!
Posted by Admin at 13:11:00