The Duke and Duchess of Cambridge carried out engagements in London today, focusing on efforts to prevent suicide. 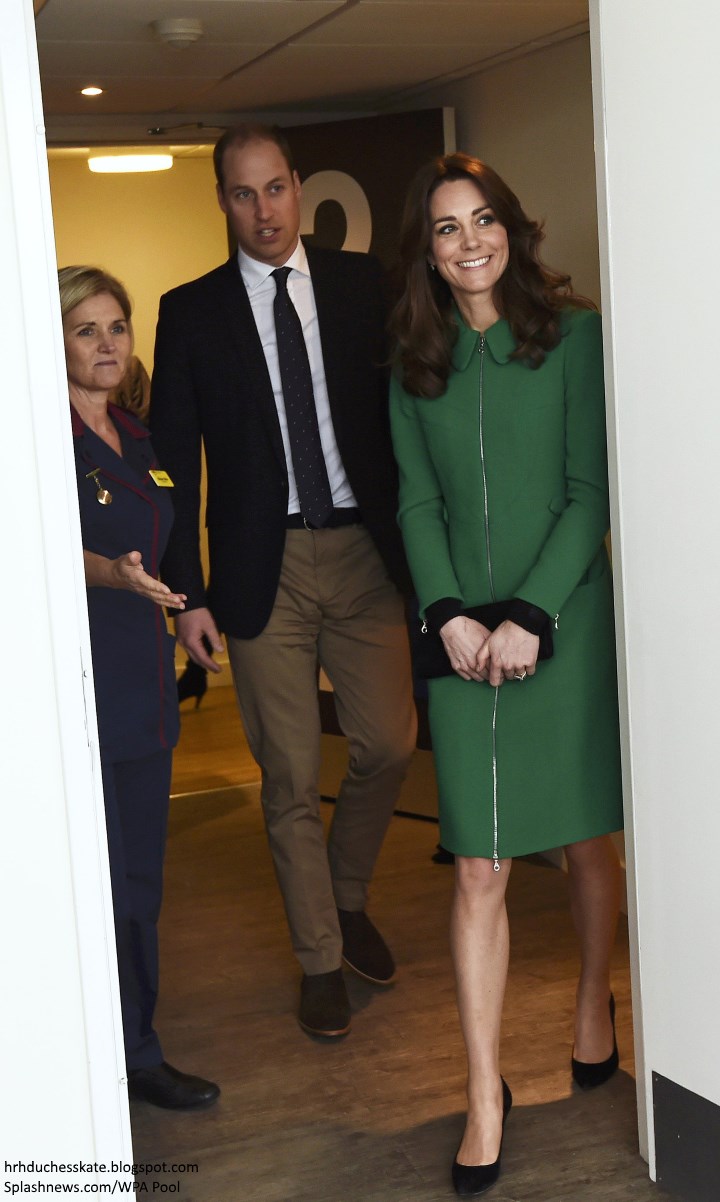 Fresh from their skiing break in the French Alps with George and Charlotte, today's events reportedly mark the beginning of a much busier schedule of engagements for William and Kate. We know the couple will undertake a tour of India and Bhutan next month and a two-day trip to France in late June. There are also reports of two additional foreign trips later in the year and - whether these will be joint trips or perhaps a solo trip abroad each for the Cambridges - it will be very interesting to hear more details. 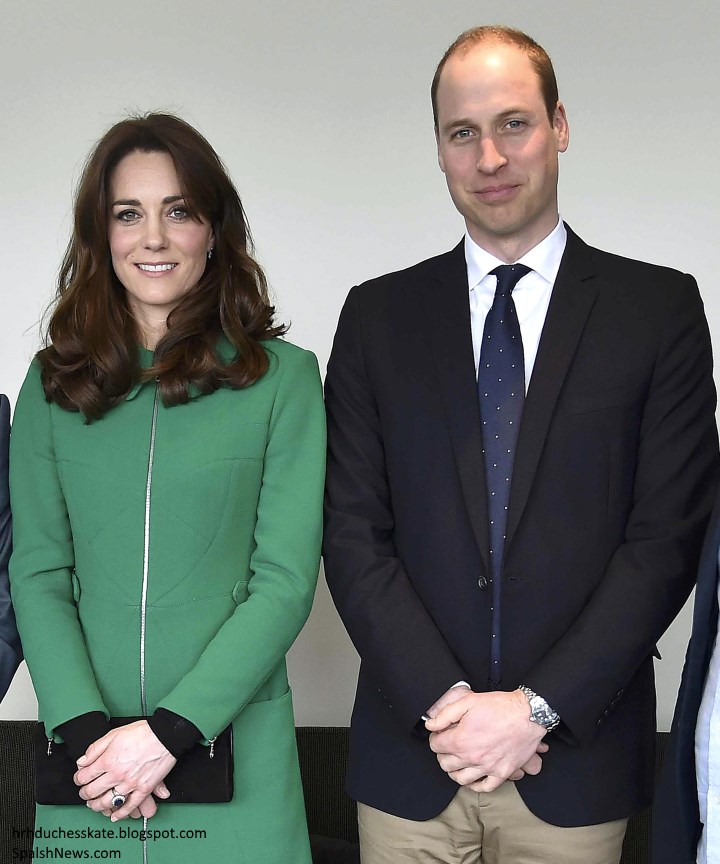 At home, mental health will be a "major focus" for the Cambridges and Prince Harry, according to Kensington Palace. The Palace noted Prince William is "particularly keen" to support mental health in young men and to understand the difficult areas concerning bullying and suicide. Meanwhile, Kate will continue her work on children's mental health and early intervention while Harry will address the 'invisible wounds' sustained by service members during their tours of duty. 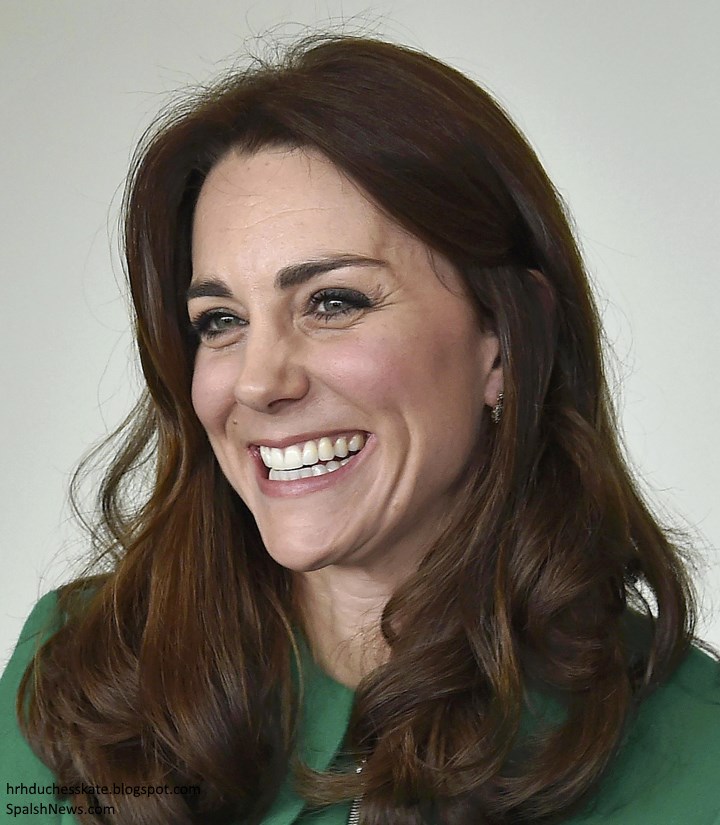 William and Kate started their engagements today with private visit to Maytree - a unique suicide centre which provides a four night stay for people in suicidal crisis - this morning. The centre shared a couple of photos from the royal visit afterwards with the caption "Look who dropped in for a cup of tea".

Today's itinerary was very much planned with a focus on the inspiring story of Jonny Benjamin, who was saved by a stranger in 2008 as he contemplated taking his own life. In 2014, following a period of hospitalisation, where Jonny received the help he needed, he launched a social media campaign titled #FindMike with the help of charity Rethink Mental Illness to find the man who saved him. The campaign succeeded and Jonny had the opportunity to properly meet and thank Neil Laybourn.


More on the events that led to Jonny's decision from an Independent article about his journey:

'On a January morning in 2008 a young man from south London approached the edge of Waterloo Bridge and prepared to throw himself off.

Jonny Benjamin had just been admitted to hospital and diagnosed with schizoaffective disorder, a combination of schizophrenia and depression. Struggling to come to terms with his diagnosis and battling to keep his sexuality under wraps – Mr Benjamin is gay – he felt he could no longer bear to be alive.

Mr Benjamin did not take his life that day; the kindness of a stranger who stopped to talk saved his life. After convincing him not to take his own life, the stranger continued on his way.'


The Duke and Duchess met Jonny and Neil at St. Thomas' Hospital in London, where Jonny was sectioned after his near suicide. 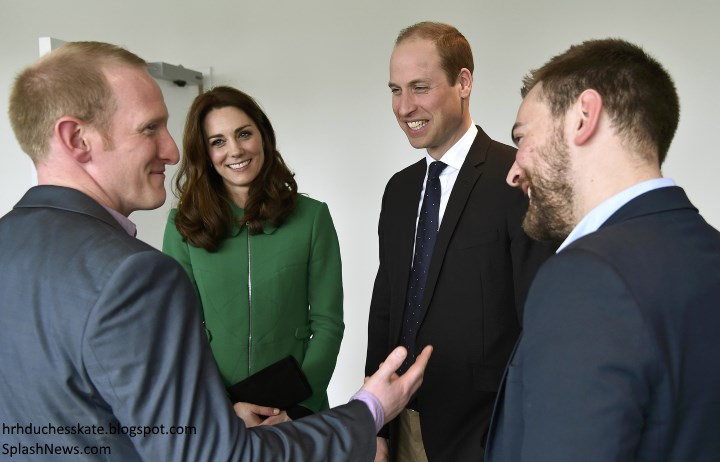 It provided an opportunity to speak to someone who has gone through incredibly challenging times, hear about the problems which led to his decision to consider taking his own life, and his experiences of the mental health system in Britain. 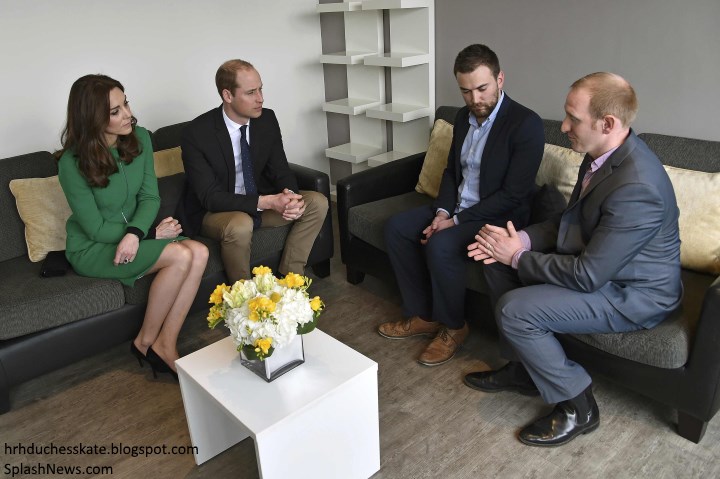 Jonny firmly believes that if he had received help earlier in his life he would not have reached his crisis point - again highlighting the importance of early intervention Kate has been supporting. 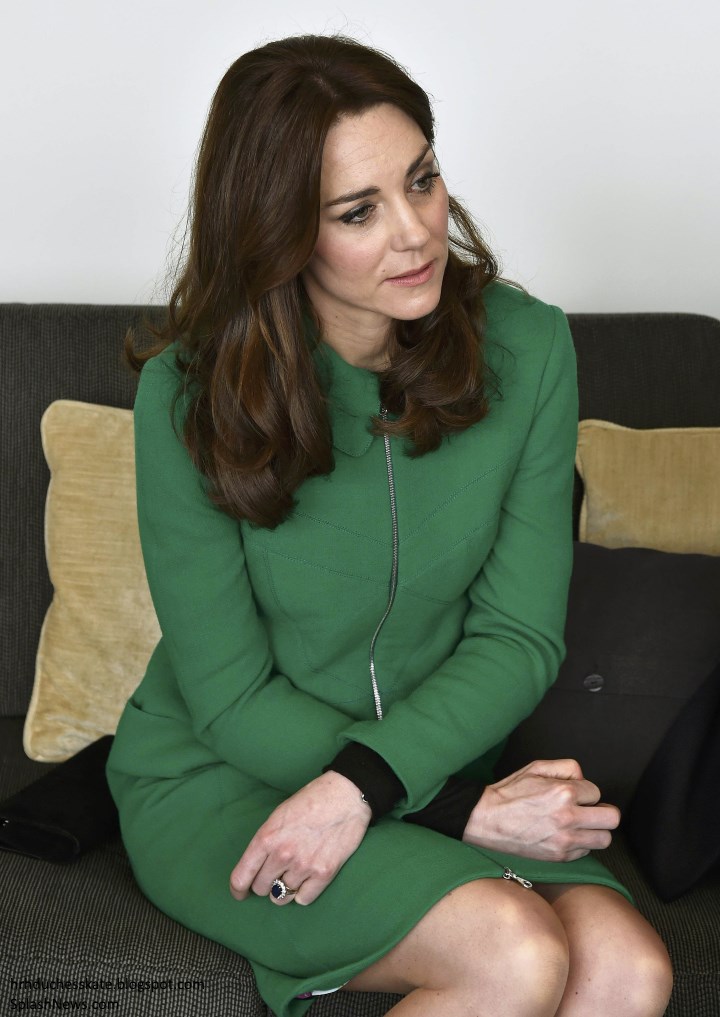 People shared quotes from the meeting in their article:

'During the meeting, William said, "Someone told me five people a day try to kill themselves. I was just blown away by the statistics." Sitting on a sofa with Kate, Benjamin and Laybourn, he added, "For both of us, the mental health piece has got lots of aspects. It's such a big issue that we need to do something about it. "We feel it's been raised higher up the ladder. It's suddenly bubbling just under the surface. Now we need to get up to the next level, to the surface."

Kate, who has championed efforts to beat mental health issues in children, stressed that childhood problems were the root cause of many afflictions adults face. "We see through the work that we do with addiction, homelessness and knife crime that a lot of it stems back to childhood," said the royal mom'


Jonny decided he wanted to help others who were going through the same difficulties he was, and in January he launched a new initative, ThinkWell, designed to help educate young people about mental health and break down the stigma through school workshops. Interactive workshops incorporating film and education have already been delivered in a number of schools by a trained workshop leader. 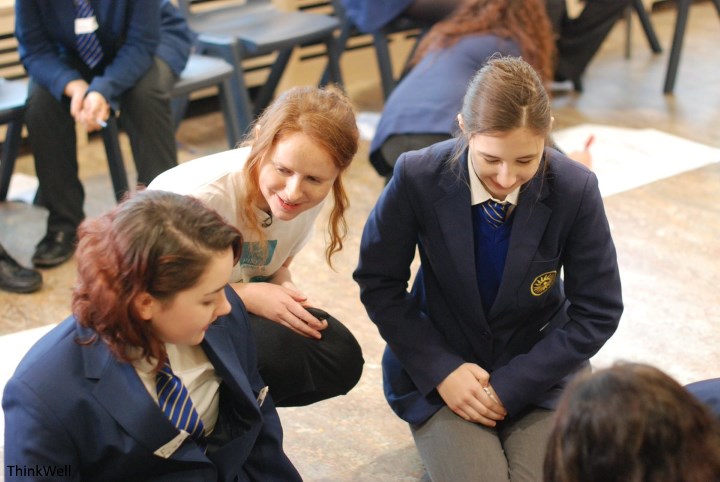 After their meeting, they travelled to Kensington Palace where they viewed a screening of The Stranger on the Bridge - a documentary about Jonny's work and the efforts of the #FindMike campaign. A group of young people from a South London school where Jonny has previously delivered his ThinkWell project were invited along to take part in a discussion. 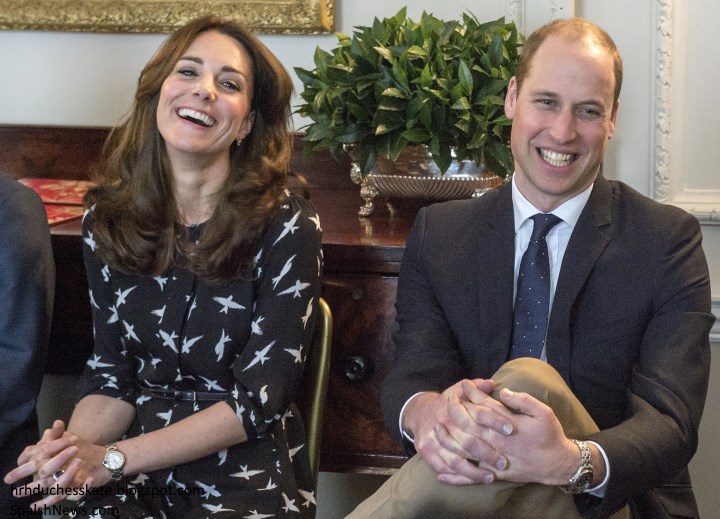 Afterwards, William and Kate participated in a private discussion with a group who have been bereaved by suicide to discuss their experiences and the support available to them. 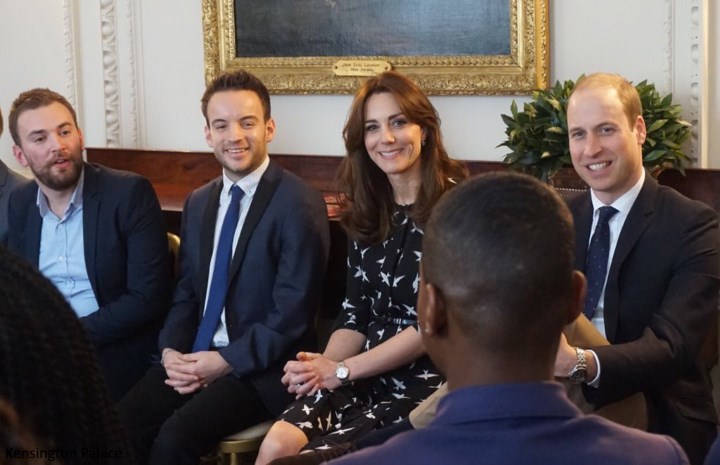 The rest of the day's programme is private. I expect this is to allow William and Kate to talk one on one with those who have considered suicide and those who have been bereaved by it, and to identify key areas and potential organisations who would best benefit from royal support or perhaps a patronage. Only yesterday, I read an article on the lack of investment and funds available for children's psychiatric services in the UK. Young royals becoming a face for this area and championing worthy causes will bear a spotlight on the much neglected sector. 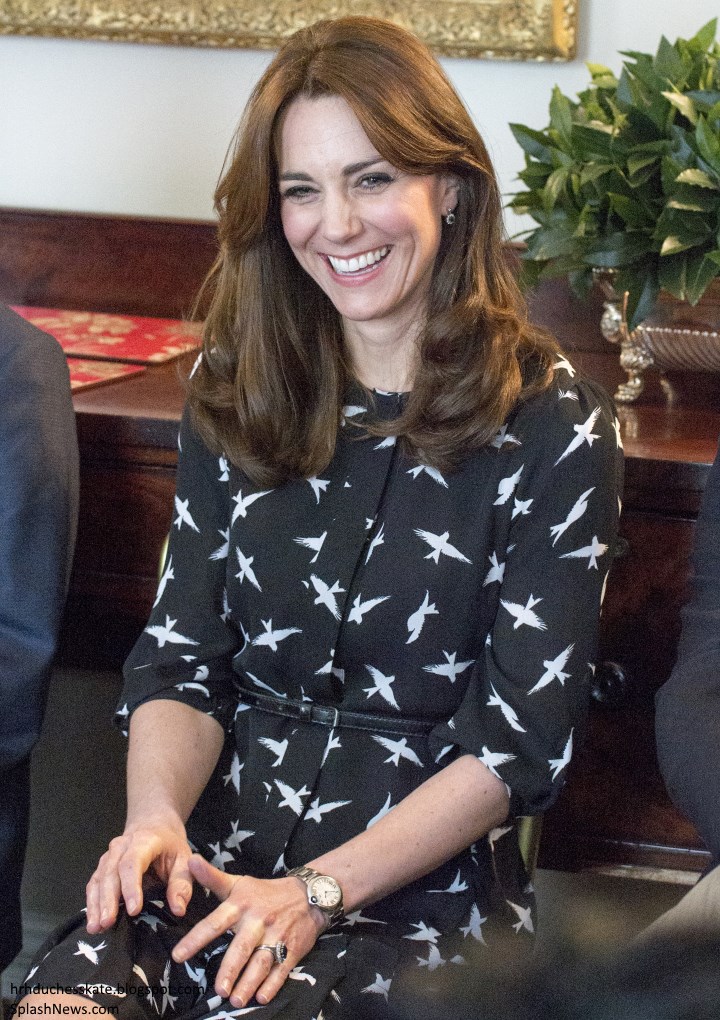 Kate brought back her Erdem Allie coat from the designers Pre-Fall 2013 Collection. The Duchess first wore it in New Zealand during the royal tour (you might recall Kate told a member of the crowd she liked it but William thought it was "a bit bright"). Kate chose it again for the start of the Tour de France race in July 2014. 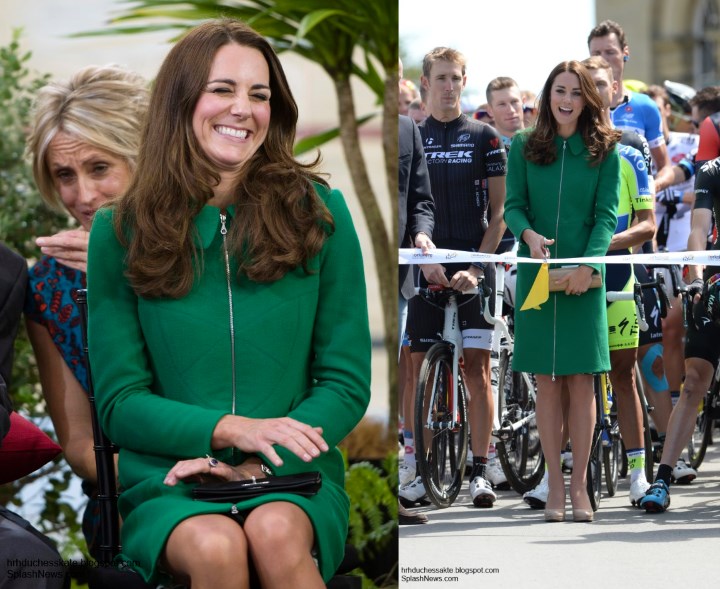 The flawlessly cut bright grass-green, knee-length coat features a tab-detailed waist, and true to form, the designer used his love of floral prints - this time on the silk lining. The wool crepe garment originally retailed for €1,824.


It appears Kate had a cardigan or long-sleeve top underneath which she removed with her coat. 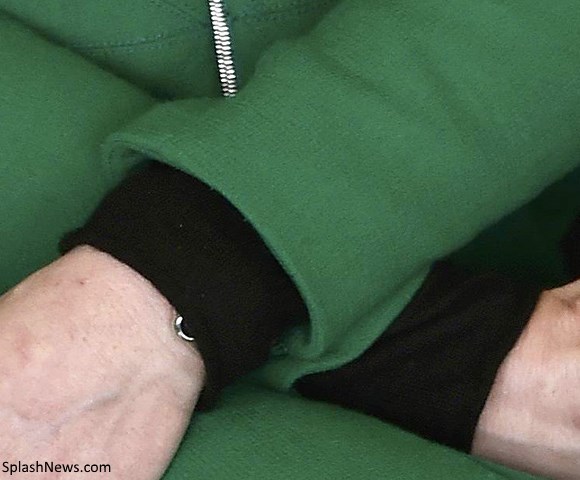 Kate's gorgeous swallow print dress is from the Jonathan Saunders diffusion collection for department store Debenhams (with thanks to the eagle-eyed Kate Middleton Style). It is understood the piece was available in 2012 for £60. The dress was described as "This black day dress from Edition by Jonathan Saunders features a button fastening along the centre front, pleats along the lower part of its skirt and a sash at the waist. It is styled in sheer chiffon with printed white birds.".


Fans of Mr. Saunders designs will be disappointed to hear his business is closing down following his decision to step down as creative director of the brand due to personal reasons.

While Kate's dress is sold out, it's a very easy look to Repli-Kate with an abundance of bird print dresses available on the high street and online retailers at present. Below we look at the Oasis Bird Print Frill Dress - retailing for £48 at John Lewis, We also see the Tyche Bird Print Dress from Shoptiques and the Kate Spade Bird Print Shirtdress. 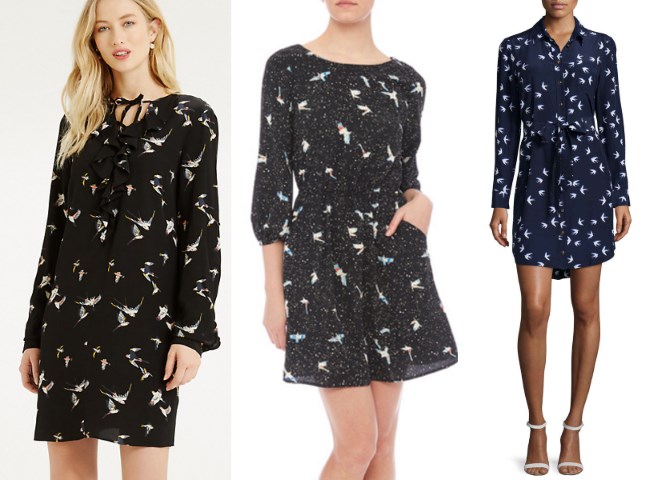 
A look at Kate's emerald earrings. 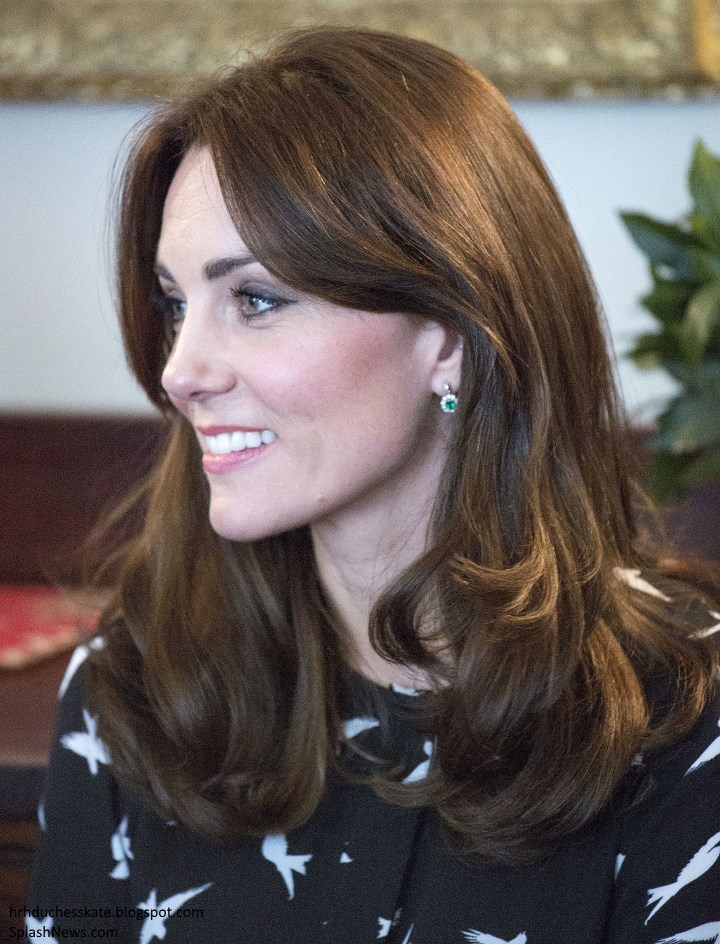 You can watch a video at ITN source and read more about the day on Jonny's blog. We'll see you tomorrow when William and Kate visit the mentoring programme of the XLP project in London.
Posted by Admin at 14:36:00