The Duke and Duchess of Cambridge, Prince Harry and The Duke of York joined the Queen and the Duke of Edinburgh to celebrate Commonwealth Day by attending the Commonwealth Service at Westminster Abbey. 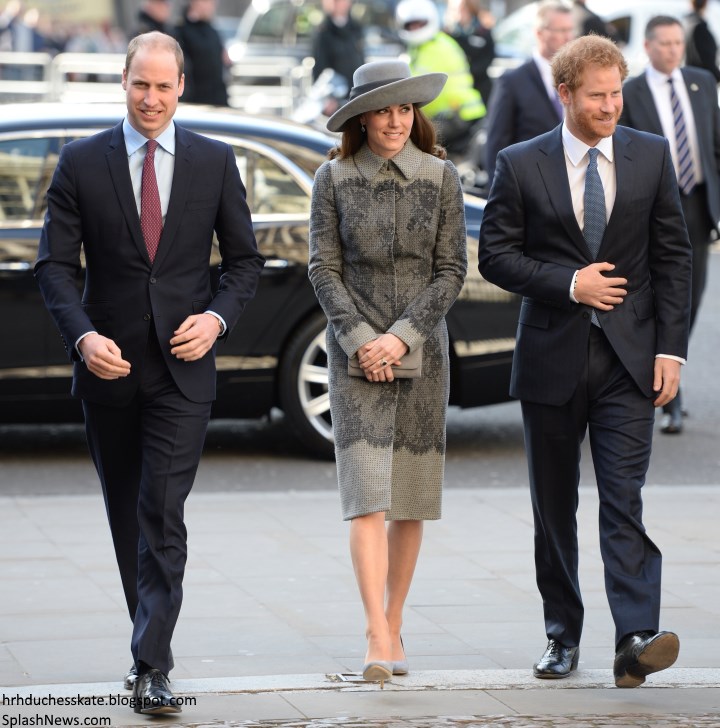 It is the second consecutive year the Cambridges have attended the service. As head of the Commonwealth, the Queen has reinforced links and seen the association of nations grow from seven to fifty-three members during her reign. One day Prince William will assume the important role -  and like the Queen - play an important part as symbol of unity at the heart of the Commonwealth. 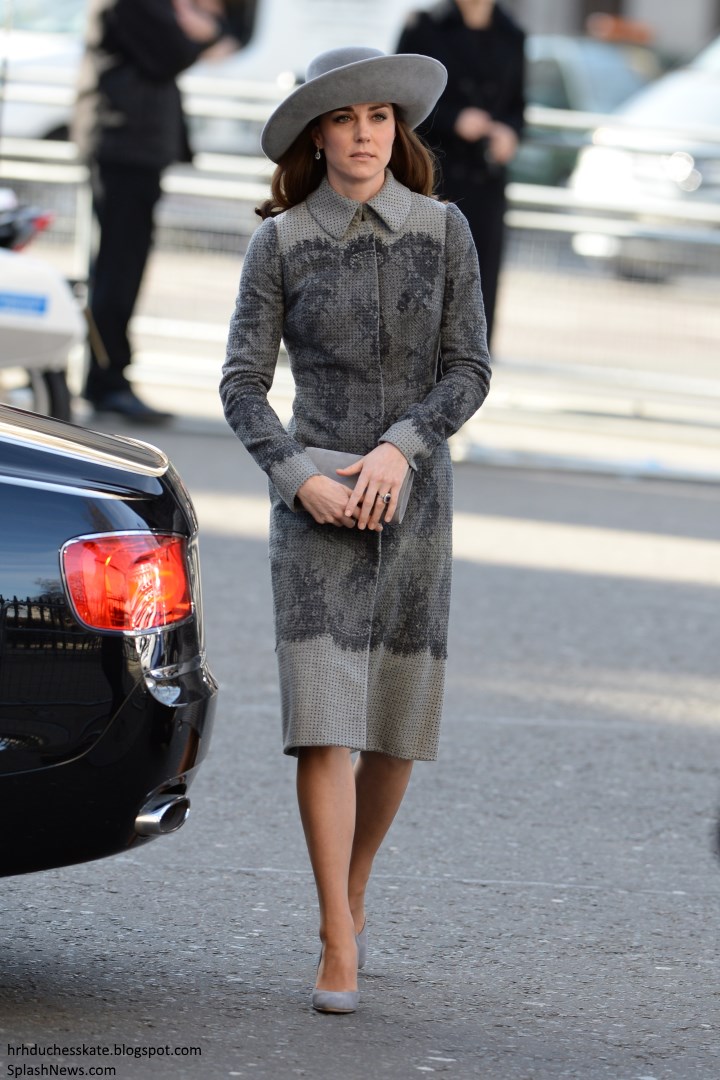 The Commonwealth Service the is the largest annual inter-faith gathering in Britain. Held on the second Monday of March it is a unique opportunity for people from all over the world to come together to promote shared Commonwealth values of peace, equality and the association's rich diversity. 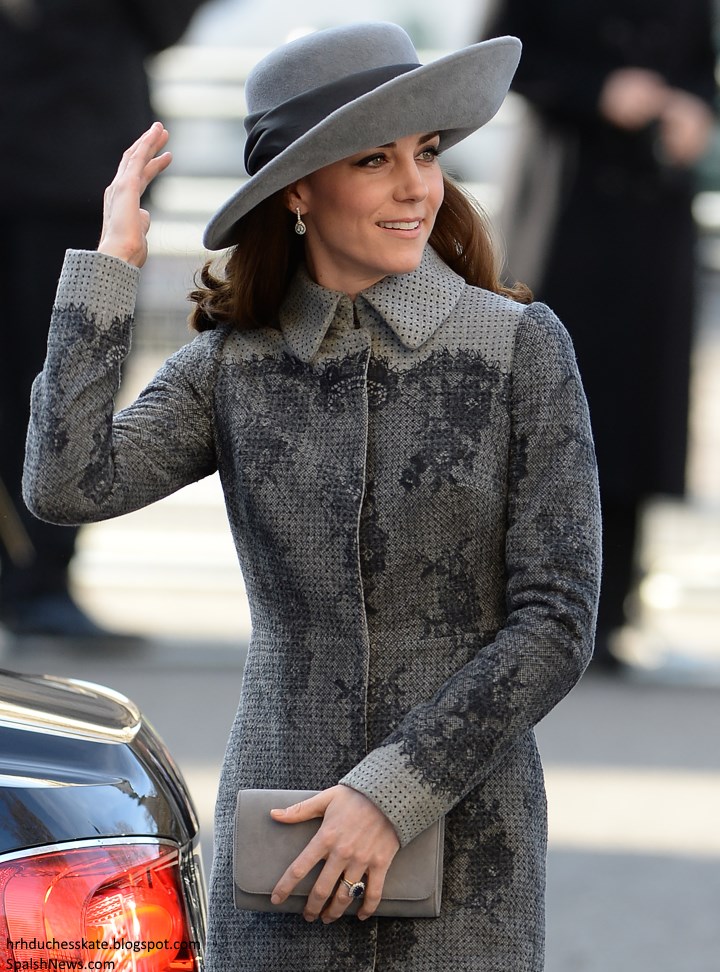 The royals were welcomed by Rev. John Hall. 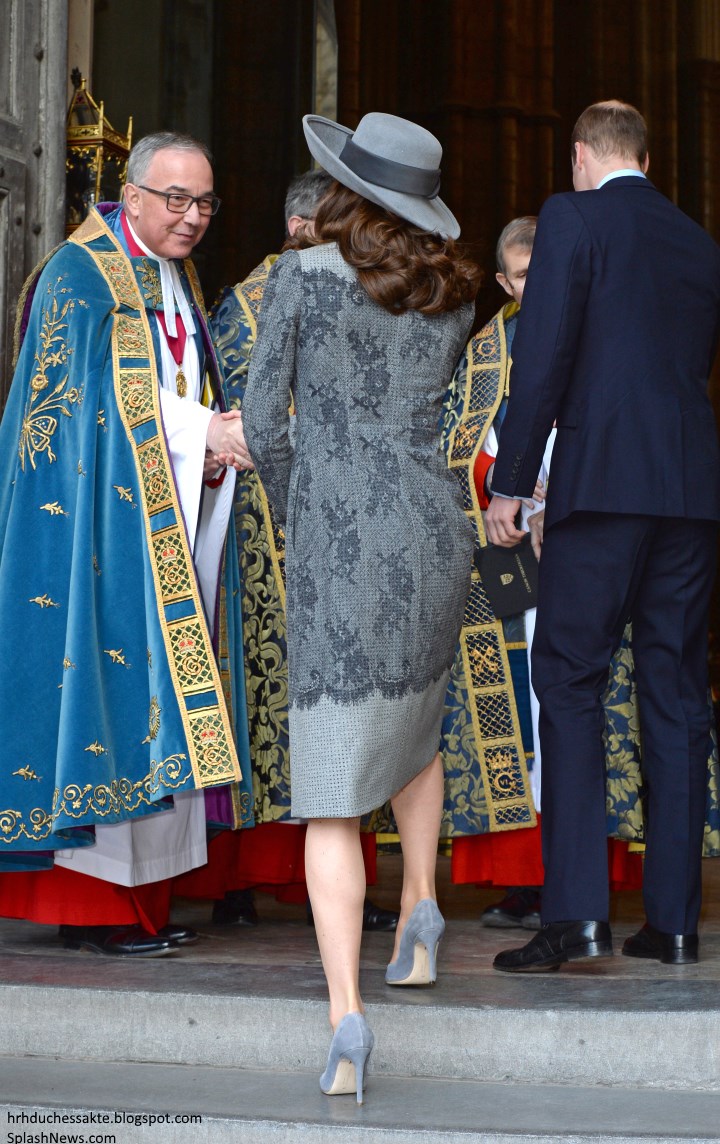 Each year a specific theme is chosen to help guide plans and activities for Commonwealth organisations. The theme for 2016 is 'An Inclusive Commonwealth', emphasising a vast community which embraces 2.3 billion people, of which 60 per cent are under 30 years old. 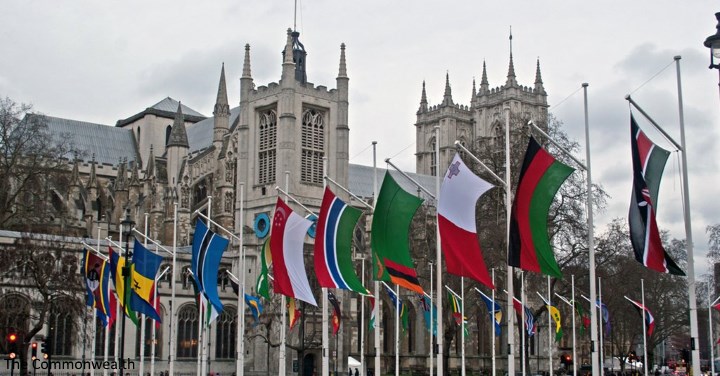 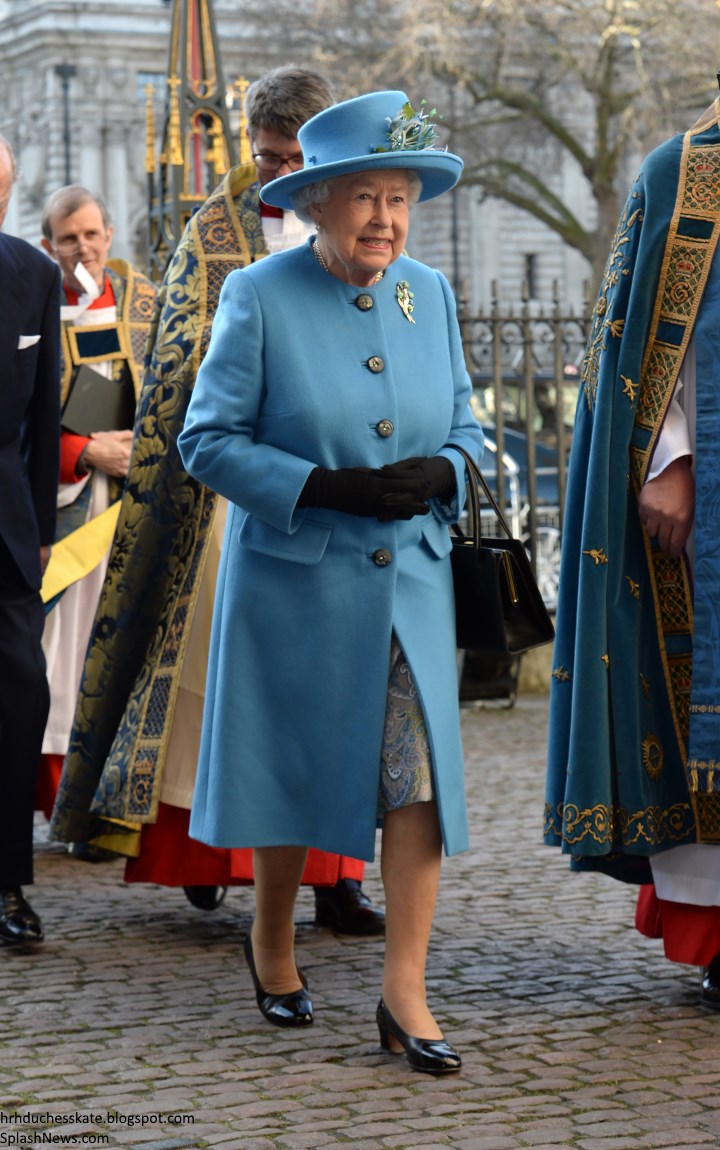 Her Majesty shared the importance of being open to new ideas and encouraging those around us in her Commonwealth Day message for 2016:

'Each of us can also make a positive difference in the lives of others by being willing to contribute and offer support.

This is an essential ingredient of belonging to the Commonwealth: the willingness to share, to exchange and to act for the common good. By including others, drawing on collective insights, knowledge and resources, and thinking and working together, we lay the foundations of a harmonious and progressive society. The greater the diversity of those included in such a shared enterprise, the greater the gains. Each of us has cause to celebrate the sense of belonging expressed in our 2016 theme: 'An Inclusive Commonwealth'.

Our recognition of this value, and the wisdom of mutual respect for each other, is set out in the Commonwealth Charter. Its opening words, “We the people of the Commonwealth” convey the conviction that individuals, as well as governments, build and shape our success.

Being inclusive and accepting diversity goes far deeper than accepting differences at face value and being tolerant. True celebration of the dignity of each person, and the value of their uniqueness and contribution, involves reaching out, recognising and embracing their individual identity.'

The fifty-three flags of the Commonwealth nations in Parliament Square. 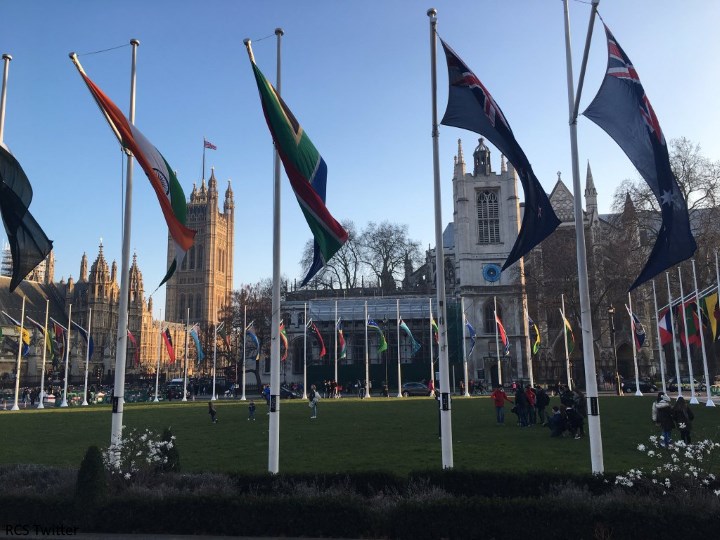 Young people across member countries were asked to explain what 'an inclusive Commonwealth' means to them. For some, it is about being part of a community of nations where each and every citizen enjoys freedom, success and can live a dignified life, while for others the theme represents a call to action to tackle some of the world’s greatest challenges such as climate change and human rights.

“Inclusivity is a significant theme to reflect on. Every Commonwealth nation is defined by its premise of inclusion. The notion of solidarity, outlined in the Commonwealth Charter, includes values that have become sleepy in the public square. Young people can and should awaken those values this year.”

“The Commonwealth is the only platform where people can share their thoughts - even their most personal thoughts - to all over the world. It never restricts you in framing your ideas in front of global audiences.” 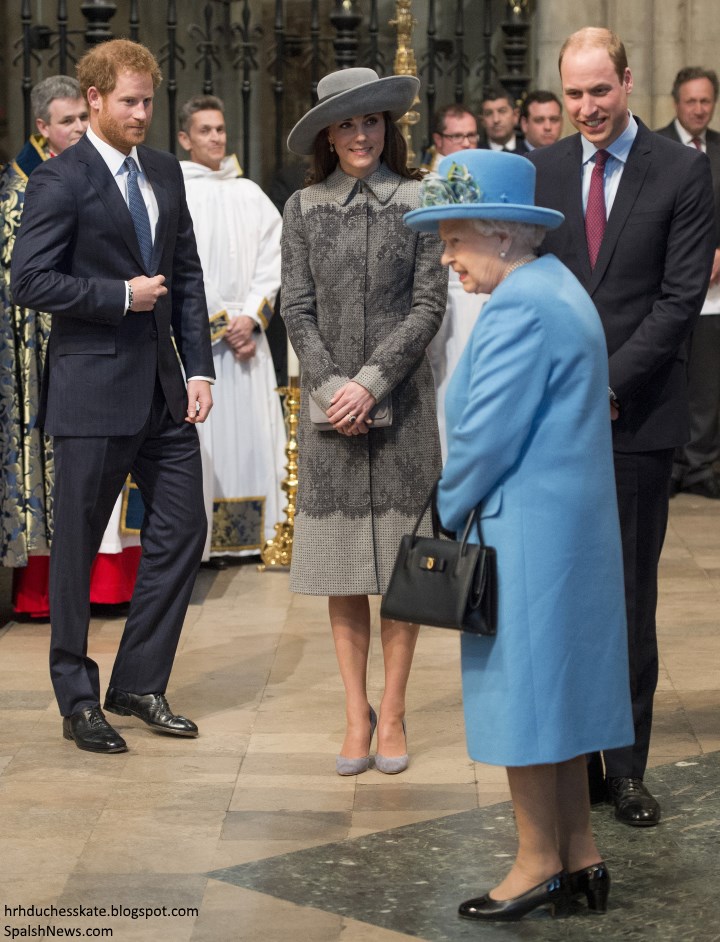 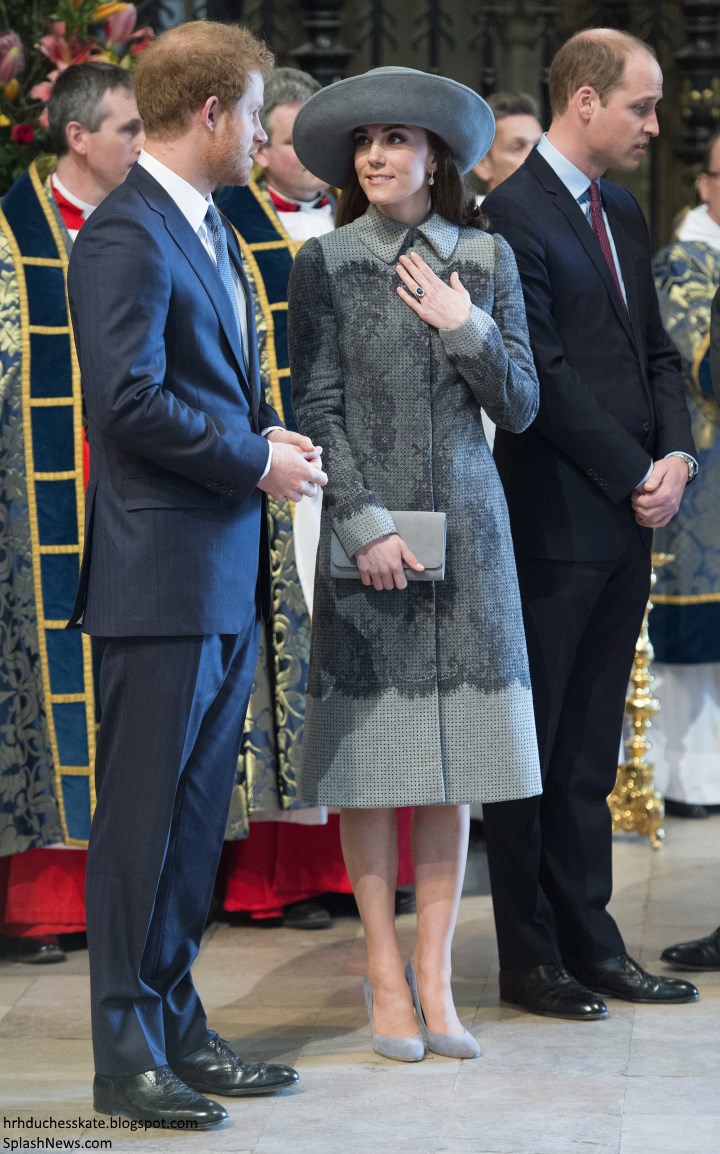 The royals listening to readings. 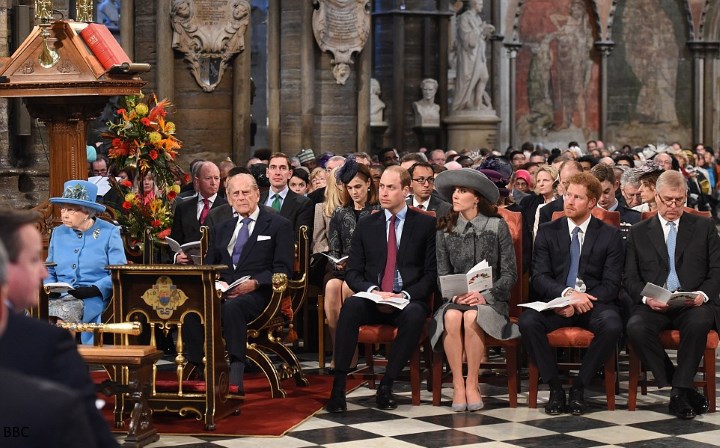 Highlights of the Service included the principal reflection to be given by Mr Kofi Annan, Former Secretary-General of the United Nations. There was also a musical performance of 'Fields of Gold' by Ellie Goulding. Of course royal fans will be familiar with Ms Goulding who performed her version of 'Your Song' for William and Kate's first dance at their wedding reception. The singer recently revealed: "I did their first dance and like, talk about scary. I was so nervous, my hands were shaking. That's one of my memories, looking down at them and just seeing them shaking." It's a rather special coincidence for the Cambridges to see Ellie performing at Westminster Abbey, where they married almost five years ago. 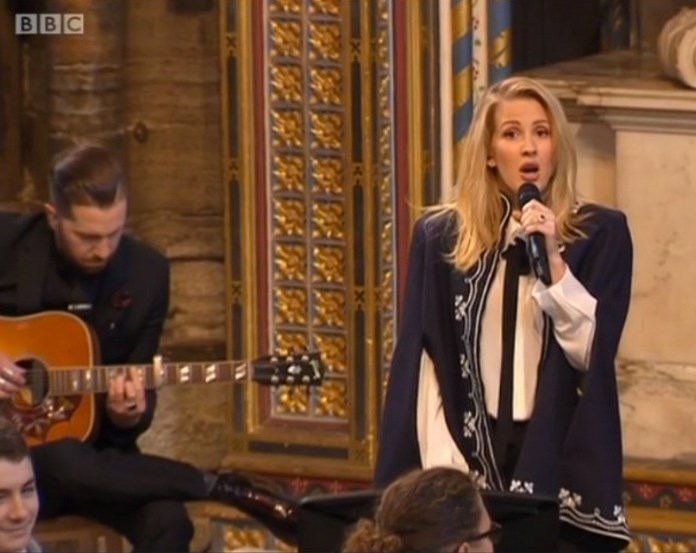 Westminster Abbey shared photos of preparations underway before the service. 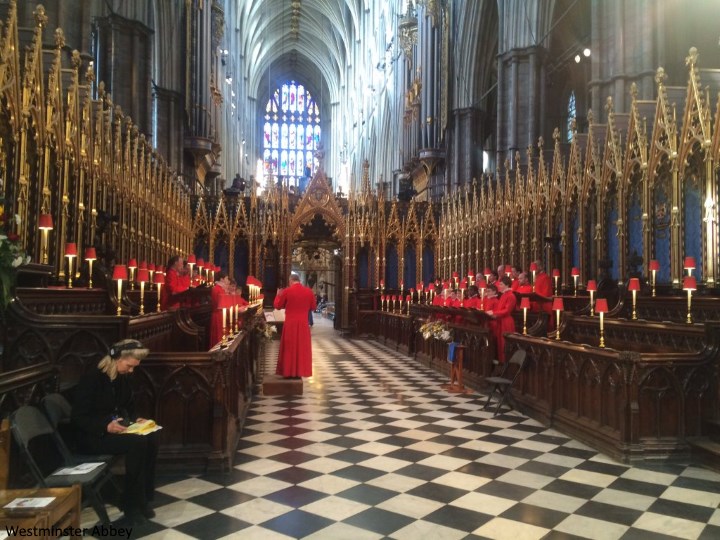 A look at the order of service. It can be viewed in its entirety here. 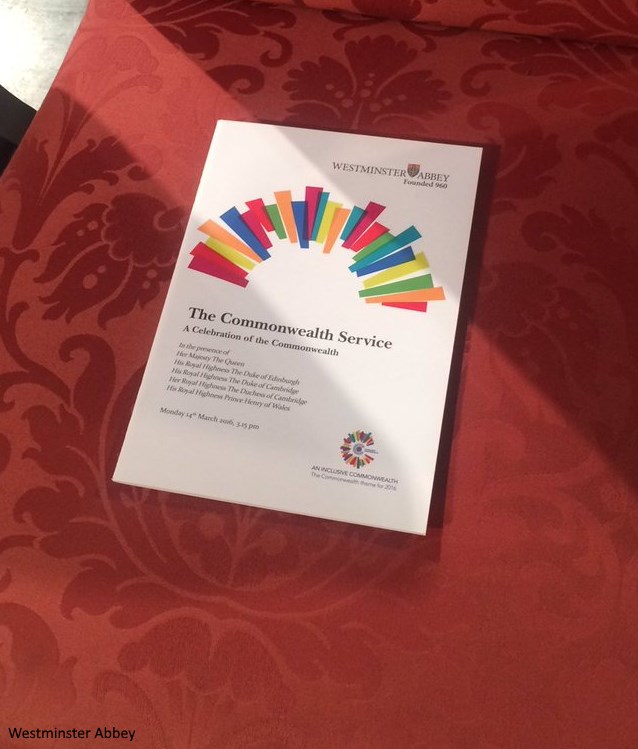 A photo of the beautiful flowers on display at the abbey. 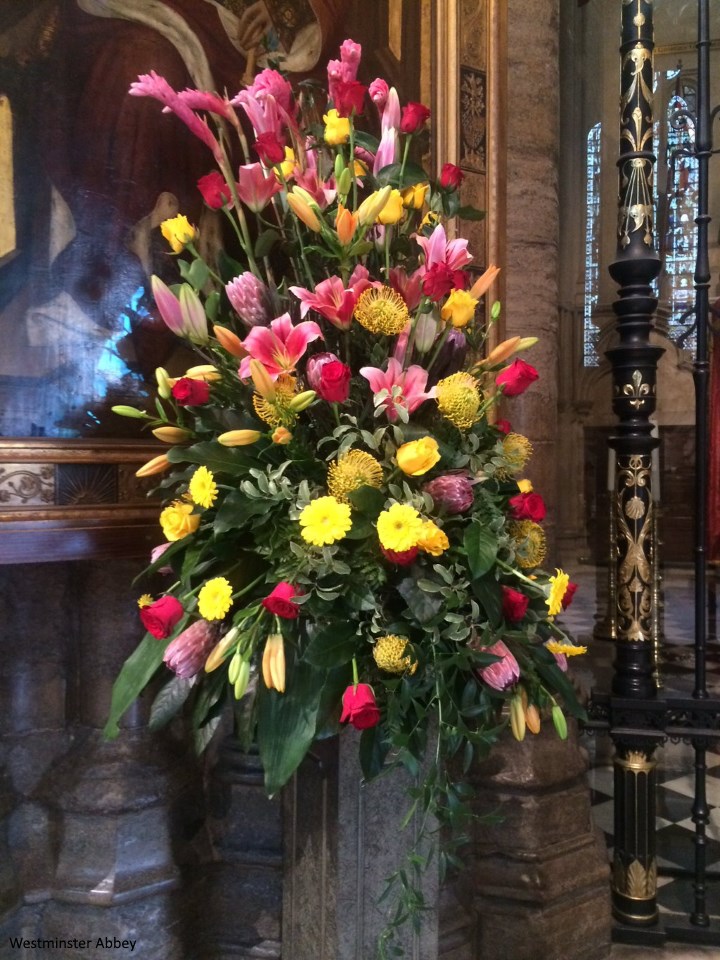 The service concluded with a procession of Commonwealth flags. The royals then met people involved in the service. Our favourite photographer James Whatling snapped a lovely shot of Rebecca Deacon and Prince Harry's private secretary Edward Lane Fox. 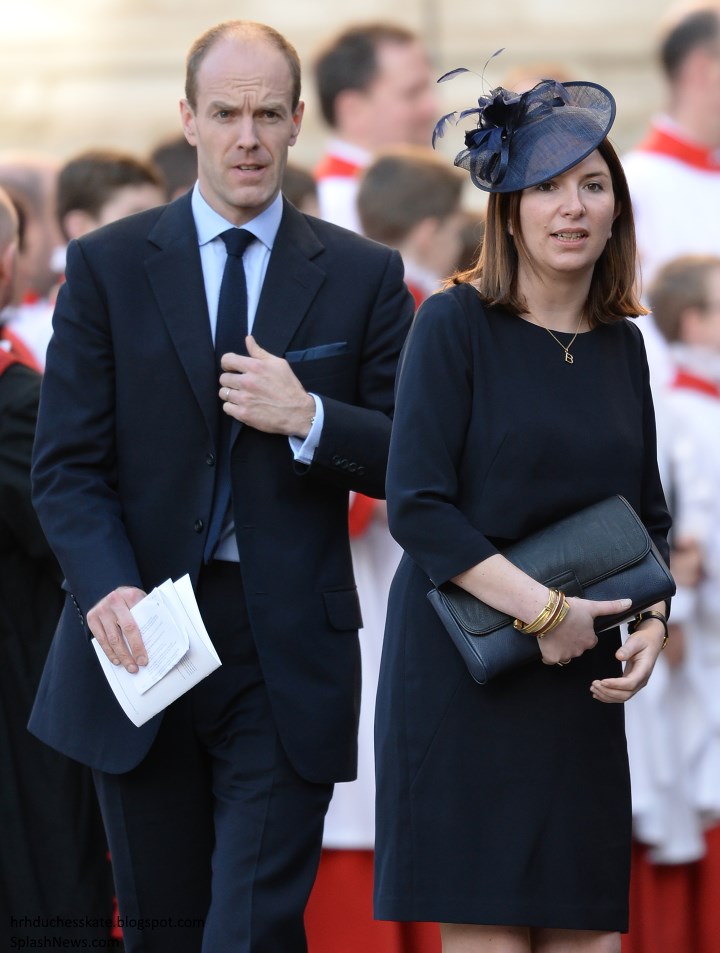 Following the service, William, Kate and Harry walked through the Dean's Yard to attend a reception. 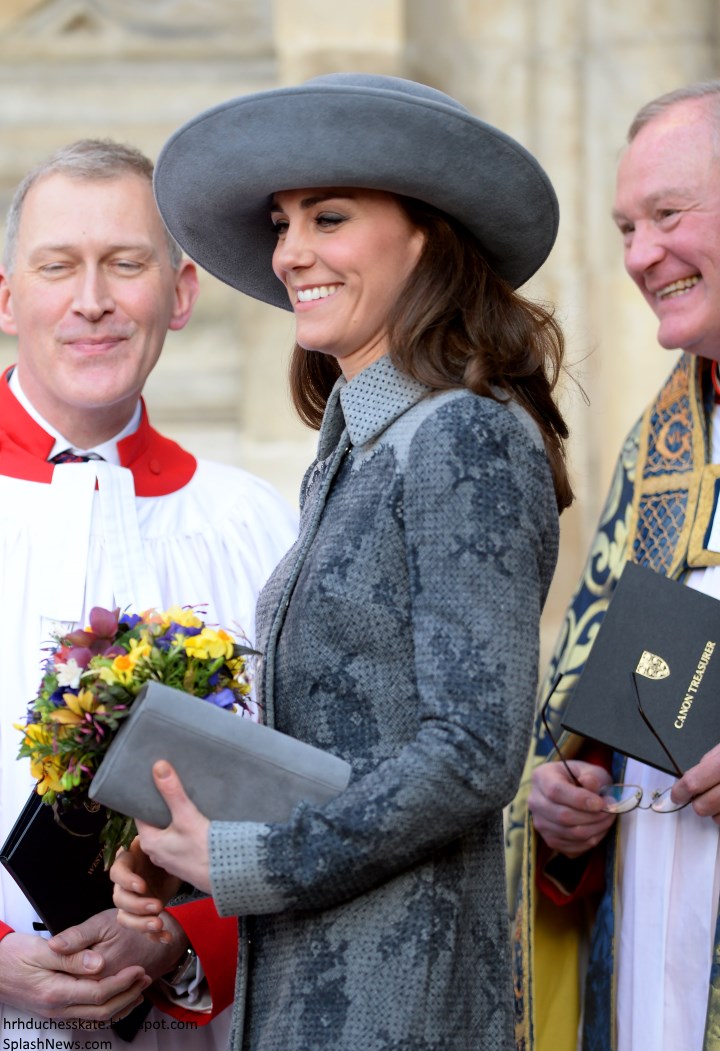 Hello! shared lovely quotes from Kate on George and Charlotte:

'Kate, 34, revealed that her daughter Charlotte is "getting bigger by the day", while her son George is developing a passion for anything with wheels.

"He's got a scooter. He's going super fast on it," said the Duchess, rolling her eyes to a group of schoolchildren outside Westminster Abbey. "It's hard to keep up with him! Charlotte is keeping him in check‎," she added. "She's getting bigger by the day."


The Duchess debuted a new bespoke coat by Canadian designer Erdem. Kate's coat very much resembles the Erdem Trench composed of wool, polyamide and cotton with lace effect and silk lining. Kate's piece has been customised to make it a nice choice for royal events such as services. I thought it a nice touch to choose a designer from another Commonwealth country.


The coat is from the pre-fall 2015 collection.


Kate wore a grey dress underneath. 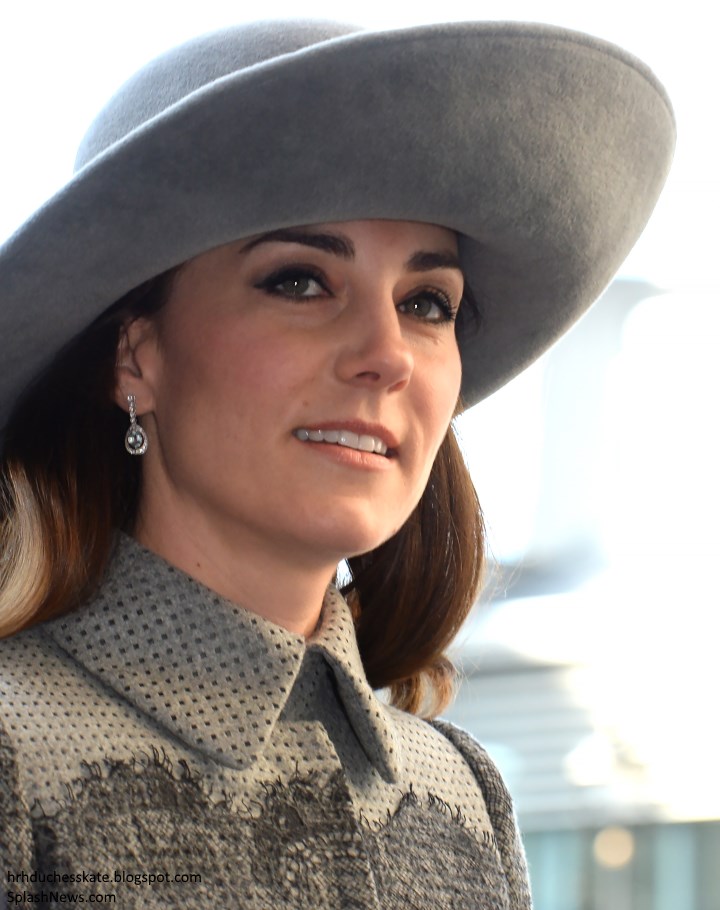 Below we see a very similar hat (with thanks to Anna).


The Knightsbridge-based milliner has been a firm favourite of royals and high society for decades. More from his biography:

'At one time in its history Beauchamp Place, Knightsbridge, could boast forty-four milliners. Now, there is just one, John Boyd. Milliner to royalty and high society for over 70 years, this 90 year-old Scotsman has the versatility to dress three generations of the same family. That one of them happened to be the future Princess of Wales made all the difference.

“Mothers would drag in their daughters with long faces shouting ‘God, you’ll look a scream in that!’ Then suddenly they all loved it”. The pink tricorn he made for the princess was seen by millions of people and rebooted an entire industry in decline for decades. Diana, now the most photographed woman in the world, was wearing a hat.' 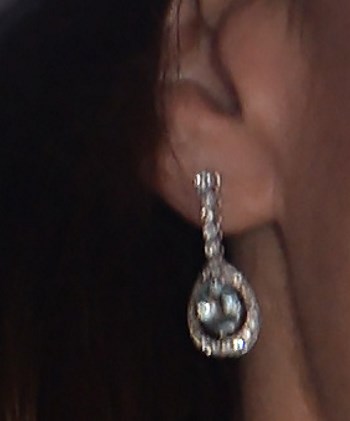 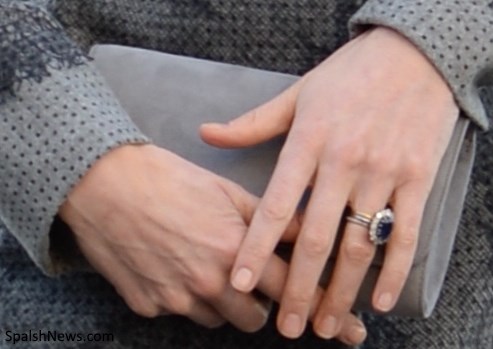 A look at Kate's grey suede pumps. Middleton Maven received confirmation they are the Winona pumps by Rupert Sanderson. 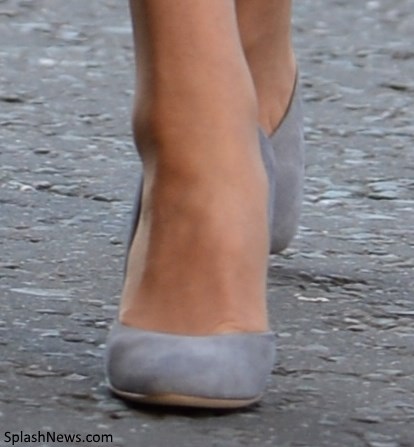 We'll see Kate next on Friday, when she will officially open East Anglia's Children's Hospices' new charity shop in Holt, Norfolk.
Posted by Admin at 16:12:00