It's been one of Kate's most highly anticipated and talked about engagements - today the Duchess of Cambridge became guest editor for The Huffington Post to bear a spotlight on children's mental health issues, bringing together leading professionals from her patronages and other organisations to share their knowledge. 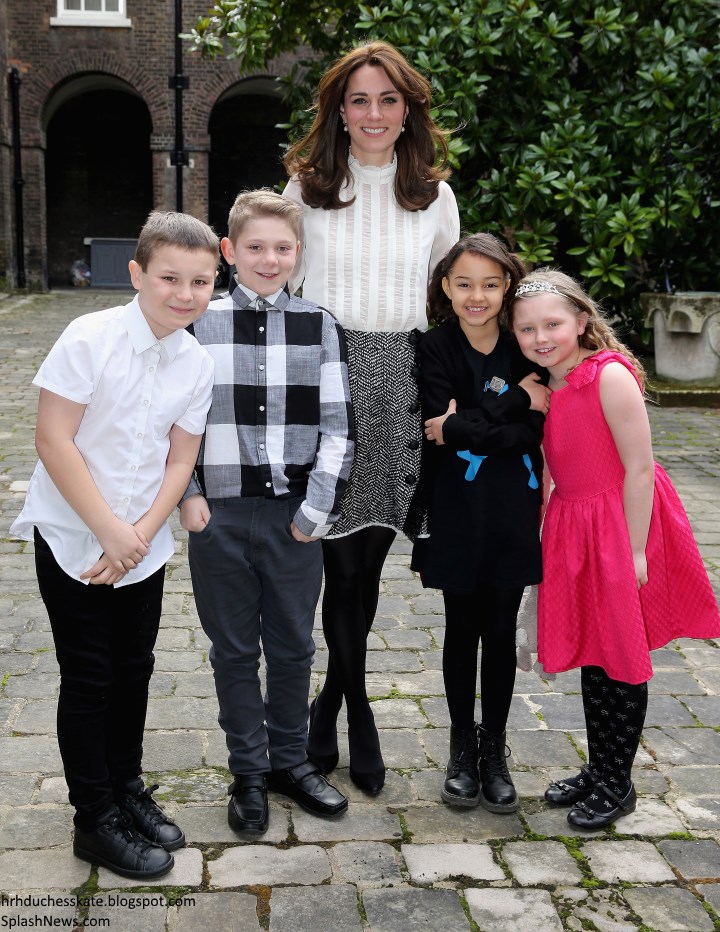 Those of us who have followed the Duchess and other royals will know this engagement is completely out of the ordinary. In the age of social media, with news so readily available, collaborating with the online news outlet it's an excellent way of spreading the word enabling as many people as possible to learn more about the issues. Kensington Palace shared a sneak peek from the newroom before arrivals. 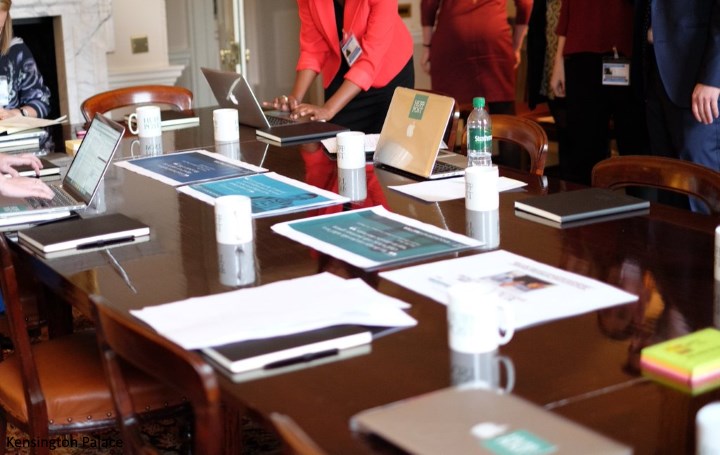 Kate looked delighted as she welcomed Huff Post's UK editor-in-chief Stephen Hull and his team to Apartment 8 in Kensington Palace (formerly one of the late Princess Diana's apartments). 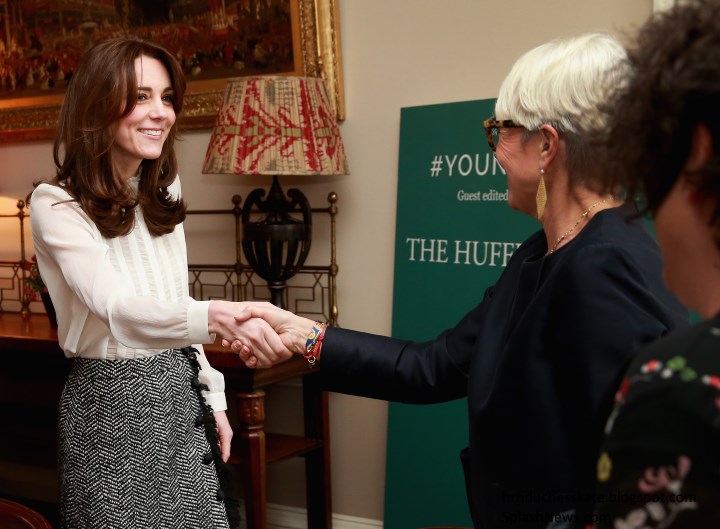 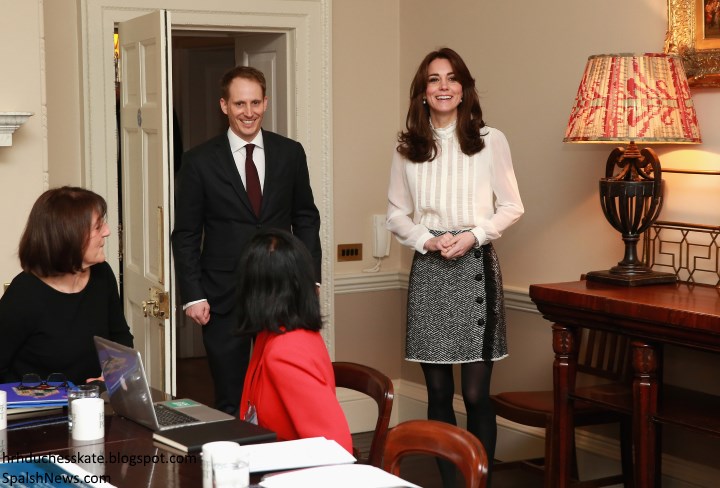 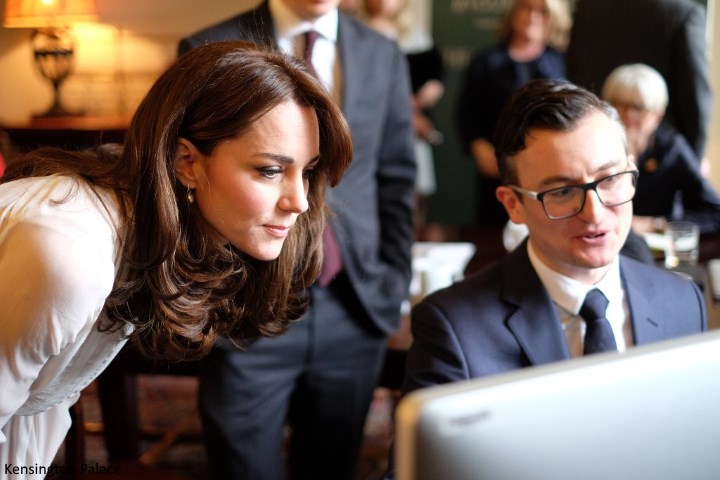 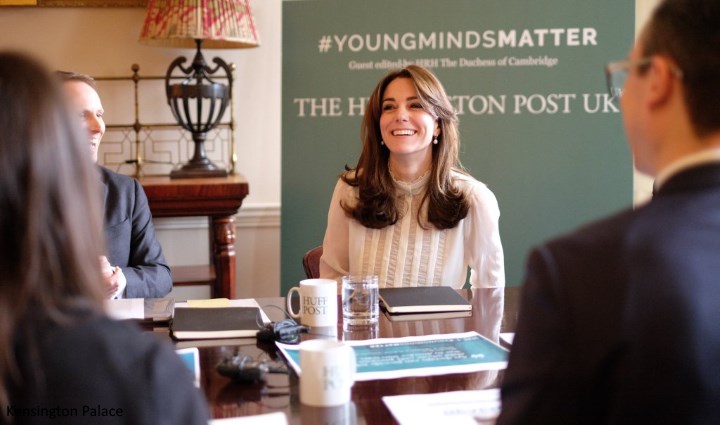 The Duchess herself contributed an excellent blog to the The Huffington Post - 'Let's Make a Real Difference for an Entire Generation of Young Children - explaining why she is getting behind the cause:

'Like most parents today, William and I would not hesitate to seek help for our children if they needed it. We hope to encourage George and Charlotte to speak about their feelings, and to give them the tools and sensitivity to be supportive peers to their friends as they get older. We know there is no shame in a young child struggling with their emotions or suffering from a mental illness.

Of course, for some parents and carers seeking help is not so easy. When families are short of time or money it is not always easy to know where to look for help or advice. That is why we need schools and communities to play their full role to help children who are struggling in ways that are not always easy to see.

In the series of articles we have commissioned, you will be introduced to some extraordinary people and organisations. You will hear from a recently bereaved wife, confronting the reality that the depression that led to her husband's suicide was with him as a 10-year old boy. You will hear from people who have fought back from their own serious illness to lead a change in the way we speak to children about their feelings and challenges. You will meet some of the extraordinary researchers who are asking important questions about the mental health of young people, and are getting answers that will be of real benefit to all parents and teachers. '


More from the Palace: 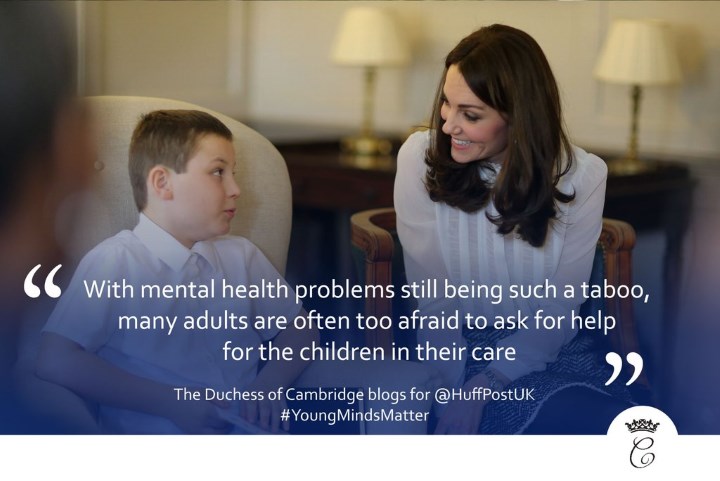 A key theme of today's visit has been launching a new initiative - Young Minds Matter. The initiative is designed to lead the conversation with children about mental and emotional health, so young people feel loved, valued and understood. 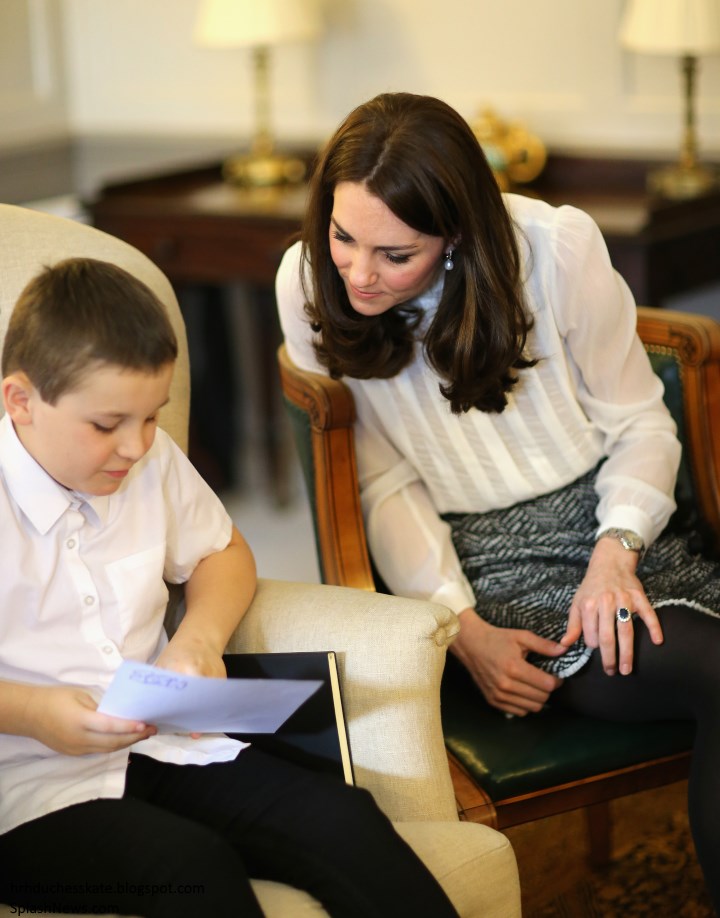 The aim is very much focused on removing the stigma surrounding mental health and encouraging people to be open about their experiences. If you're active on social media you can participate in the discussion by using the hashtag #youngmindsmatter. 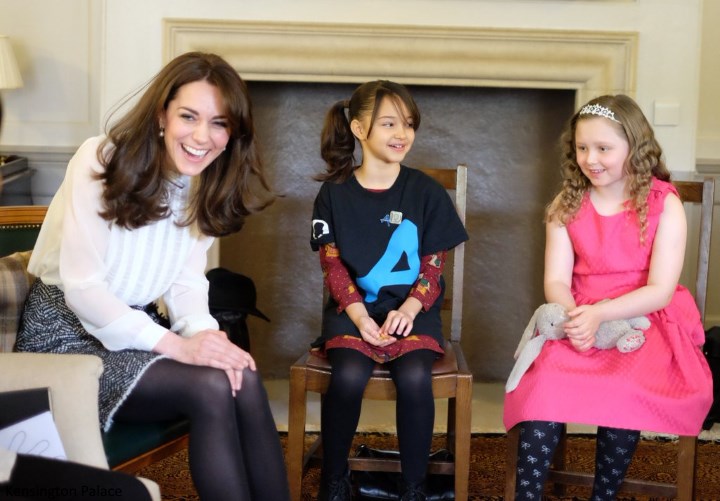 Kate chatting with a group of children supported by her patronages who shared their experiences with her. 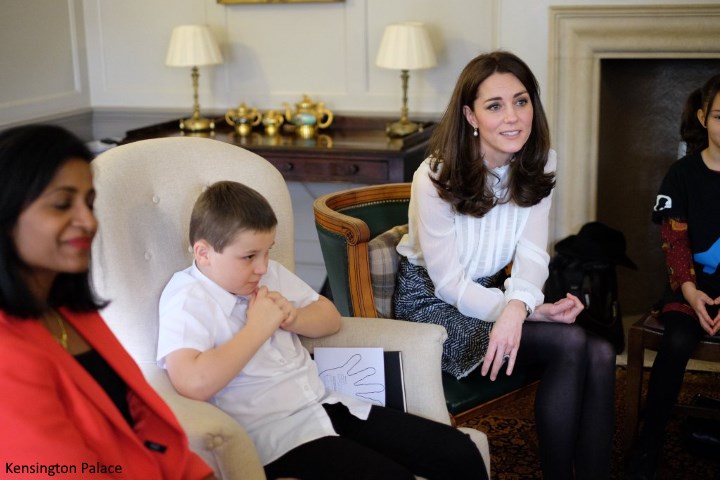 It was wonderful to see one of the contributers is none other than First Lady of the United States Michelle Obama who shared a piece asking people to Change the conversation around mental health. Given the inclusion of the First Lady one imagines this day was months in the planning and it's really heartening to see people like Kate and Michelle coming together to support such an important cause. 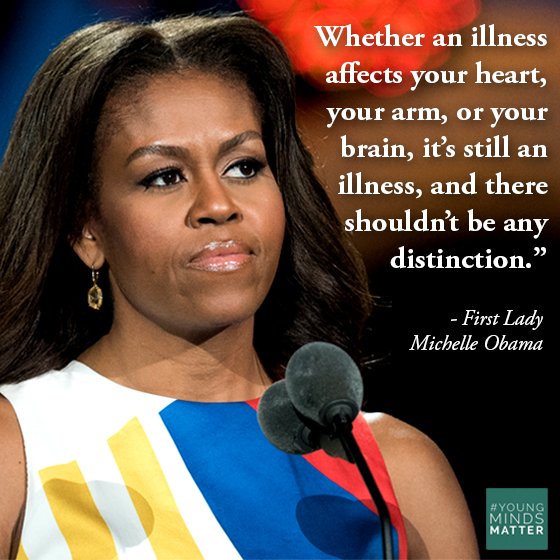 The Duchess commissioned a selection of moving and insightful pieces. 'Never Too Young'  was a fascinating read in which reporters spoke to adults with mental health issues about how early intervention could have helped them. One lady, Sarah, discusses how her father left when she was four and she went from being a quiet little girl to throwing tantrums and arguing all the time. Fast-forward to the present day and she suffers from mental health issues she feels could have been hugely helped with early intervention.


In my opinion, one of the most moving pieces in the series of articles contributed was 'For my husband and the boy he used to be' - a heartbreaking account from a woman who lost her husband, Rob, to suicide:

"By the time you read this, I will be on my way to New Zealand to see my husband Rob. I have waited nearly nine months to see him. To tell him I love him, to press my bare feet into the grass of his family home, to spend as much time with him as possible. This isn't the reunion you're expecting. He won't be there to meet me at the airport.

We won't be walking on the beach laughing at oystercatchers darting around, nor will we be holding hands underneath Auckland's vast blue sky that always seems so much bigger than anywhere else in the world. Like a rainbow in sunlight, he is both here and not here because nine months ago, Rob took his own life after years of suffering from severe depression."


The Duchess commissioned a film report on her patronage The Art Room. It includes the devastating story of a little girl who stopped talking after seeing her father die. Click here to view it.


Another insightful article - What would you tell your younger self? - features four inspirational teenagers telling their stories of surviving mental health challenges. These first hand accounts will no doubt be incredibly helpful to other teenagers struggling with the same issues.


Chief executive of Action for Children (an organisation Kate visited last year) Sir Tony Hawkhead contributed an educational piece on the issues facing children and the statistics involved - 'It Takes a Whole Village to Raise a Child':

'Action for Children's own data shows that 49% of all 14 year-olds we worked with
from last April had emotional health needs and that 40% of parents worry about their children's emotional wellbeing. For the children we support not getting the love and care of a family, the opportunity to play, regular routines and being listened to means that they don't build the emotional resilience they need to cope with everyday challenges.

Good mental health starts in childhood. Research shows that 75% of mental illness in adult life starts before a child reaches 18 years-old. Mental health problems in young people can result in lower educational attainment - for example, children with conduct disorder are twice as likely as other children to leave school with no qualifications. Young people can develop risky behaviour such as smoking, drug and alcohol misuse and unsafe sex.'


The Power of the Paintbrush: How Art Therapy is Saving Children with Mental Health Issues discussed the role of organisations such as Kate's patronage The Art Room in enabling children to externalise troubling or confusing emotions through art. One practitioner explains how the art sessions give children an opportunity to open up:

"It’s a really good way to get them to talk about themselves as they’ll paint things on to objects that matter to them," Beattie says. Discussions are led by the children, with practitioners taking a step back to listen to the pupils interacting.

Beattie explains: "A group of boys were painting clocks and one of them said 'I’m going to give this to my dad'. Another boy said: 'But I thought you didn’t like your dad, I thought your dad pushed your mum down the stairs'. And the first boy said: 'No, that’s not this step­-dad, that was my other step-­dad' It gives us an opportunity to listen to their difficulties and it gives them an opportunity to say them but in a very safe environment."


It was an enormously successful day for children's mental health. The Duchess working with The Huffington Post; enlisting experts and well known figures such as Michelle Obama was a stroke of genius. From reading the articles I feel I've learned a lot and the compilation of first-hand accounts and editorials proved a fascinating mix. This is exactly what Kate needs to be doing to help spread the message, and I'm delighted to see how passionate she is in this area and look forward to seeing what's next. Remember to keep the conversation going by using the hashtag #youngmindsmatter on Twitter. :) 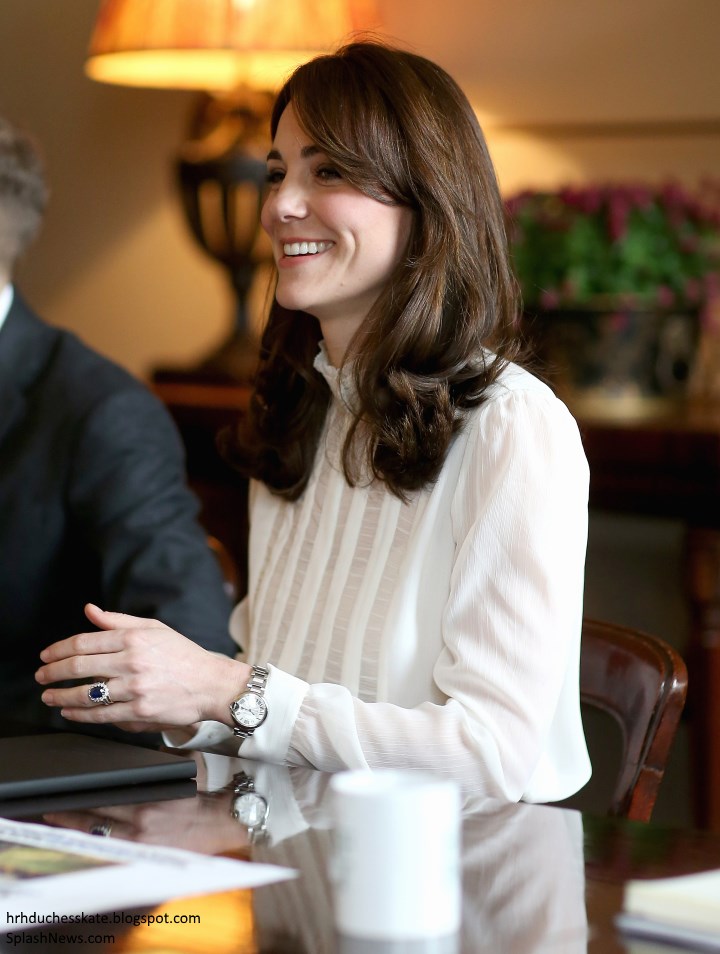 The Duchess looked every inch the editor in a chic ensemble by Reiss and Dolce & Gabbana. I've always enjoyed seeing Kate mix designer with high street and this chic, professional look is very much a winner for me. 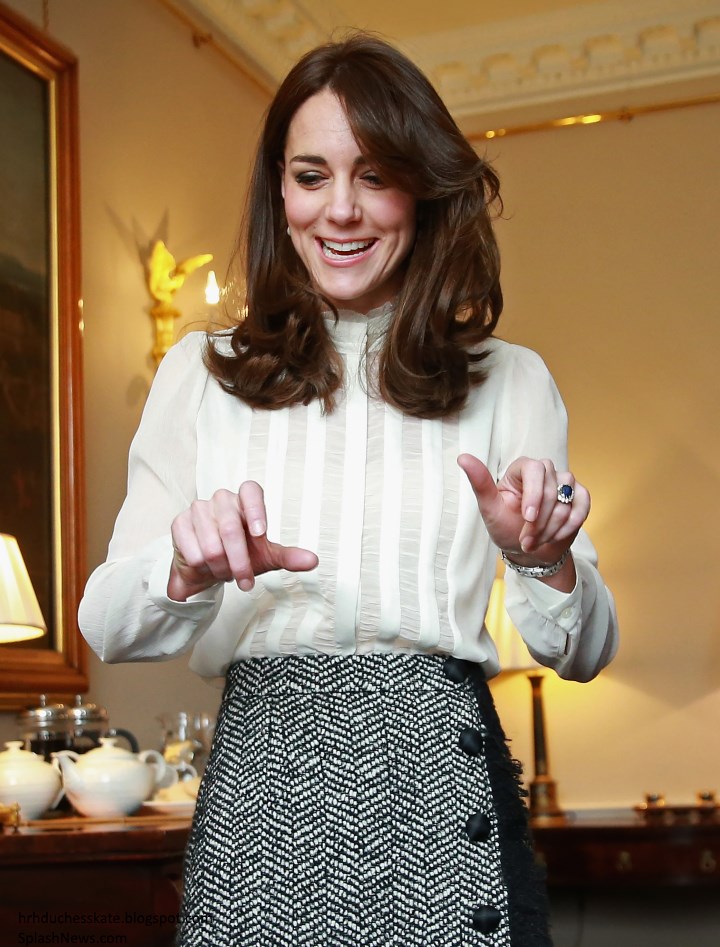 Kate wore the Reiss Vinnie High Neck Shirt in off white. The 100% polyester piece is cut from a lightweight chiffon with a textured stripe design and a high neck. There's a vintage feel to the piece and it's a garment Kate could wear time and time again with various separates. It's available for $230 at Reiss and £120 at John Lewis.

I suspected we would see Kate wearing more Dolce & Gabbana; today she selected their stylish Boucle Wool Blend Skirt (with thanks to Middleton Maven) The skirt is described as a "modern approach to a classic". It features contrast button fastenings and a yarn fringe detail peeking out from the side. It's currently on sale for £267 (40% discount) at My Theresa in limited sizing.


The Duchess wore black tights and her Stuart Weitzman Power Pumps (with many thanks to Anna). 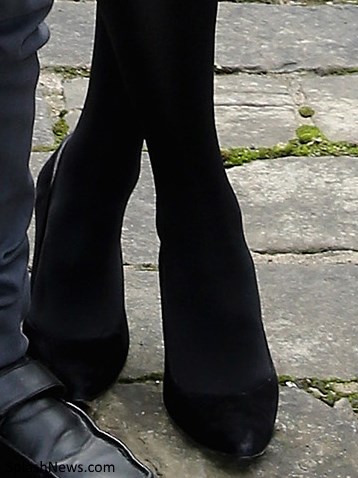 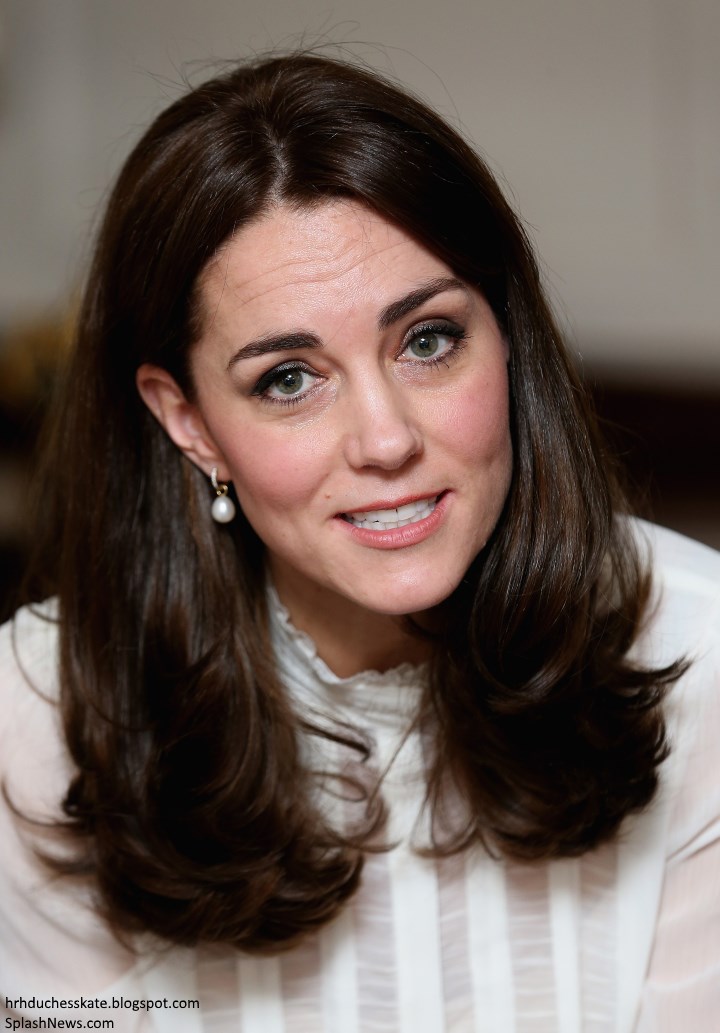 And completed the look with her Cartier Ballon Bleu watch. 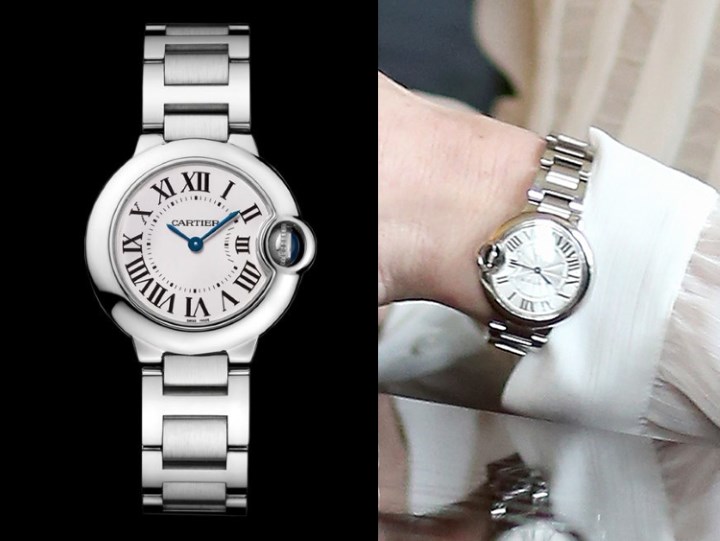 You can view videos from the day at ITN Source Royal and YouTube which includes a few words from Kate.


Also today, it has been officially announced Kate has become patron of The Anna Freud Centre. The Duchess carried out a couple of engagements with the organisation in recent months including their Christmas party in December. It's an excellent choice for her and fits in perfectly with her focus on mental health. You can read the official press release here.

We'll see you tomorrow when William and Kate return to Anglesey for the RAF disbandment parade.
Posted by Admin at 12:06:00