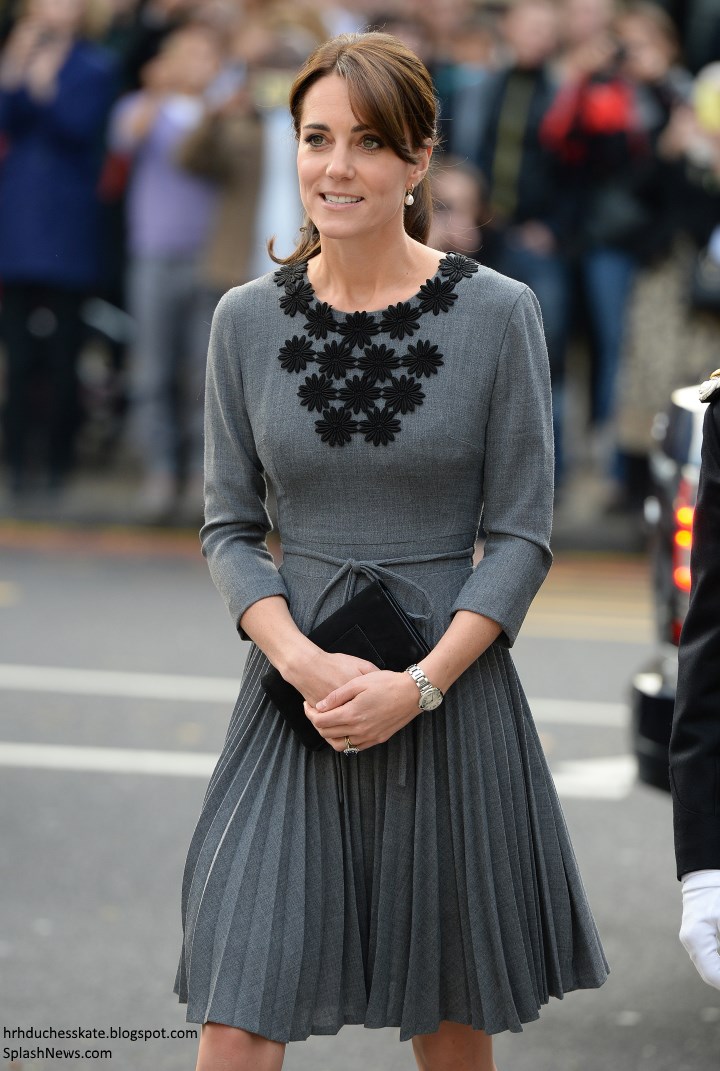 
Kensington Palace said: "This engagement reflects the Duchess of Cambridge's particular interest in early intervention programmes, which provide specialist support to children and families at the earliest opportunity, to prevent the development of more serious problems in the future." 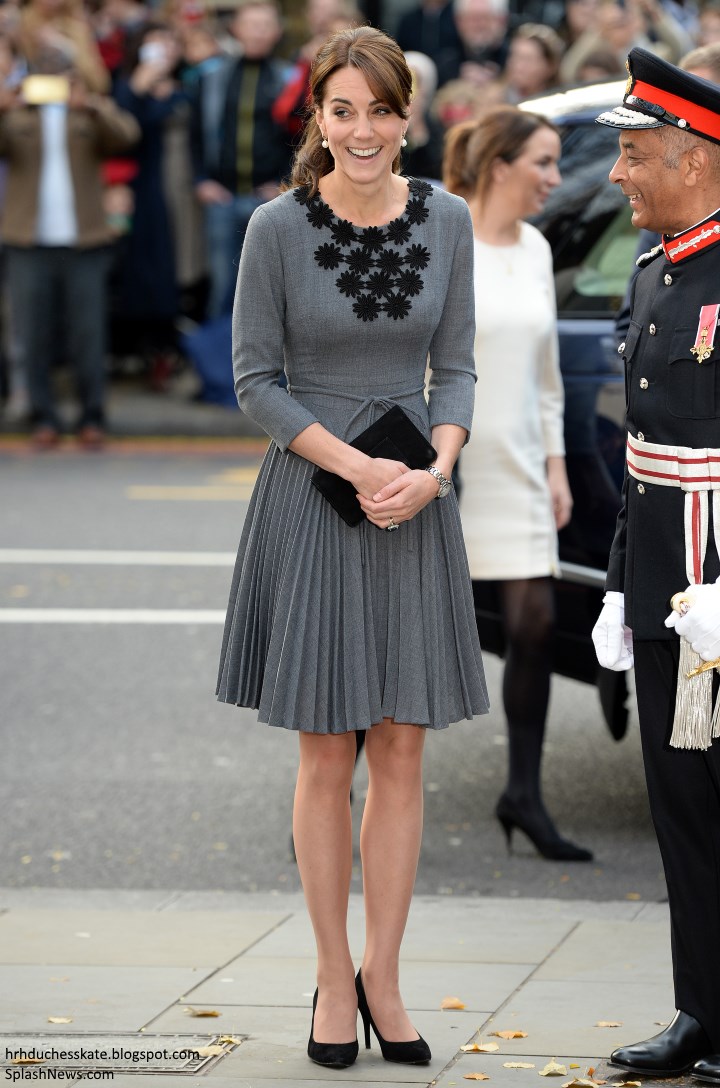 Chance UK mentors and staff use a solution-focused approach to grow a child's strengths, build their self esteem, and find positive alternatives to their challenging behaviour that could otherwise result in anti-social or criminal offending in later life. 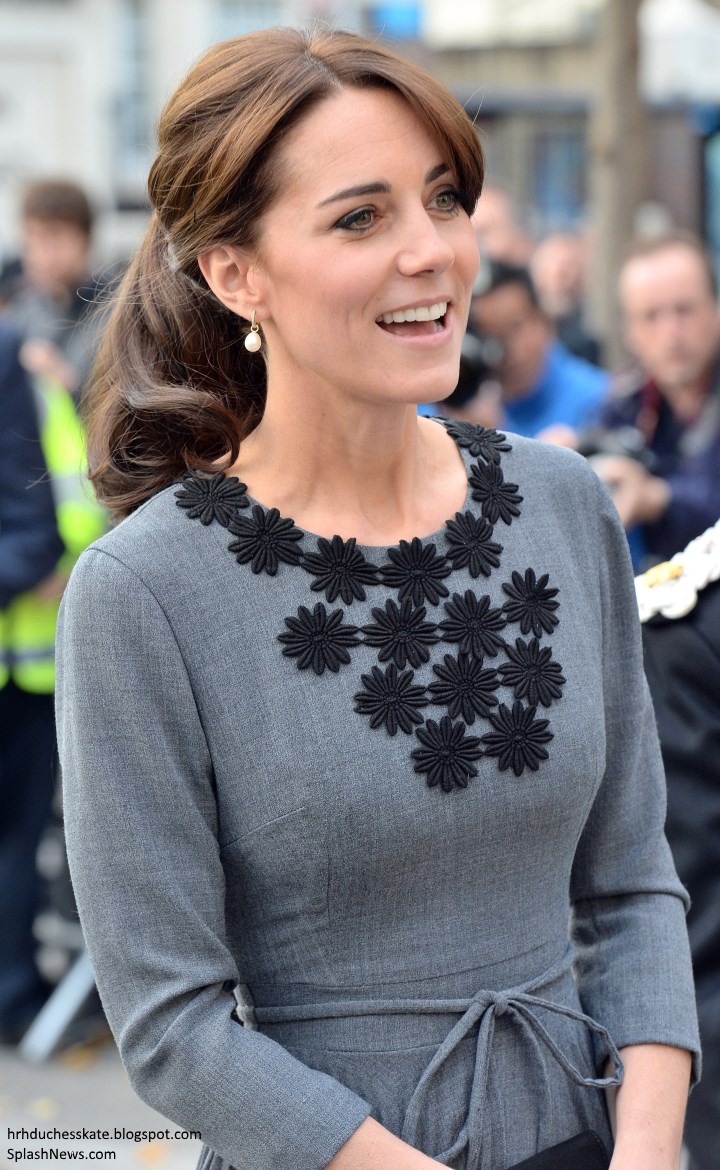 The charity's objectives include: introducing more safety and stability into children's lives; directly addressing the difficulty experienced by each child and family; reducing isolation and nurturing children's sense of self worth. If you wish to find out more or donate please click here. 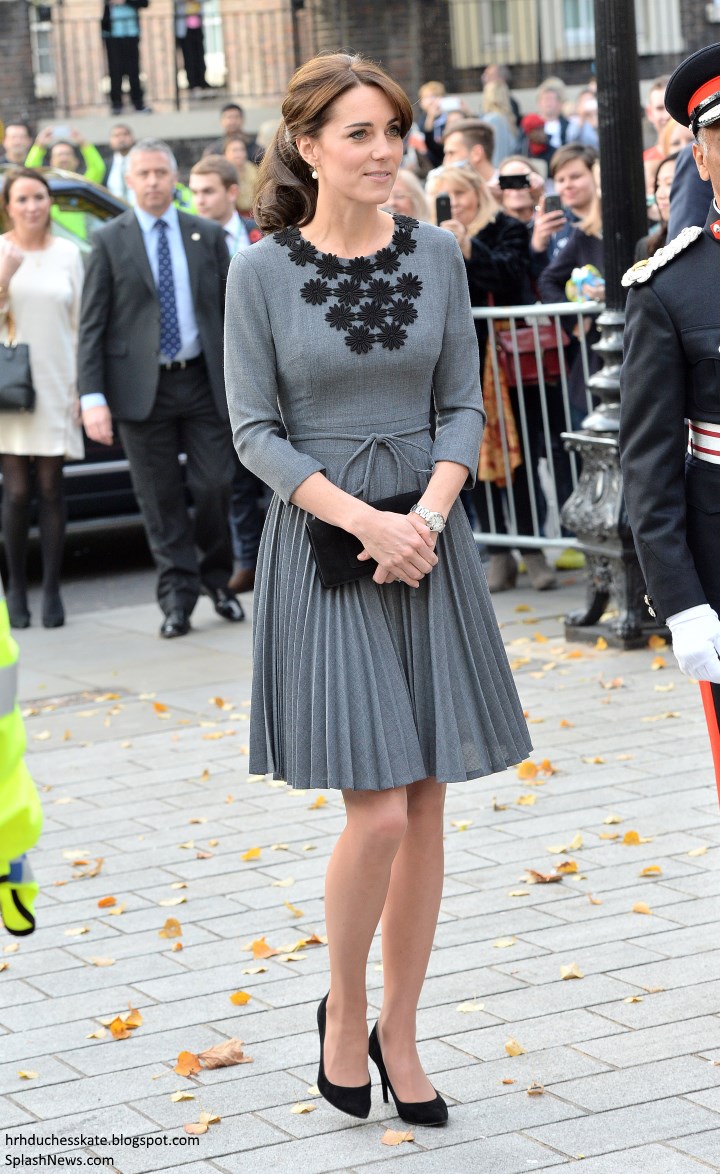 Below, Islington Hall where the event was hosted.


The charity has been incredibly excited ahead of the royal visit and the team were turning the town hall council chamber into a playroom over the past couple of days.


The Duchess gained an introduction to the charity's child mentoring programme. It works with children aged five to eleven who are at risk of developing anti-social or criminal behaviour, providing weekly one-to-one mentoring with a trained adult volunteer. These sessions work towards achieving defined goals that are specific to each child's needs, directly addressing the difficulties each child is experiencing. 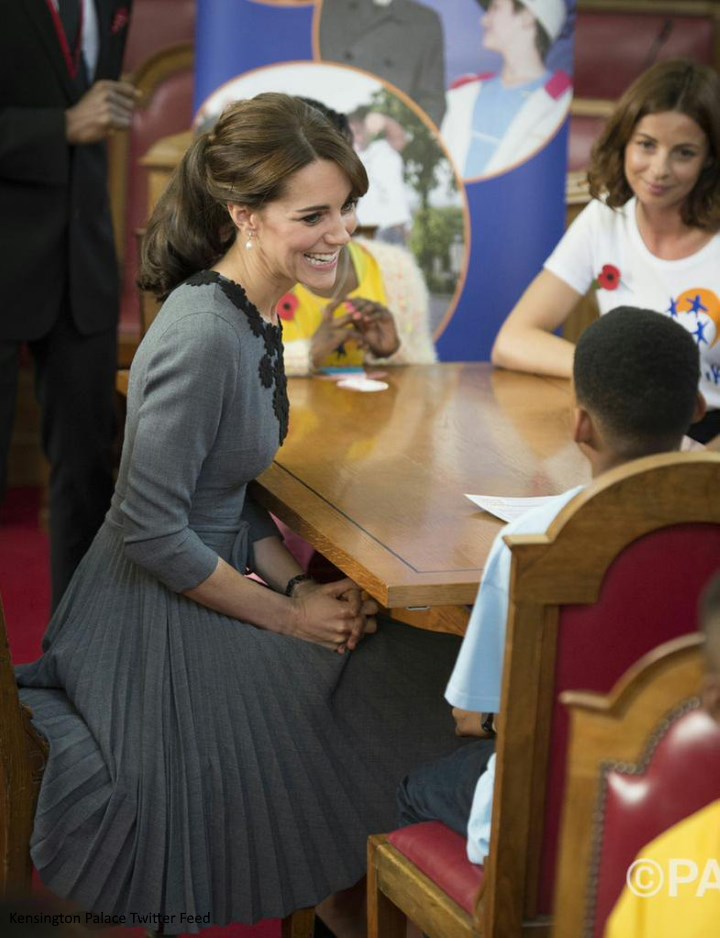 The visit offered Kate an overview of the charity's work by meeting a selection of children enrolled on the Chance UK scheme, along with their parents and mentors.

Kate then attended a reception celebrating the work of the charity and met staff and supporters. 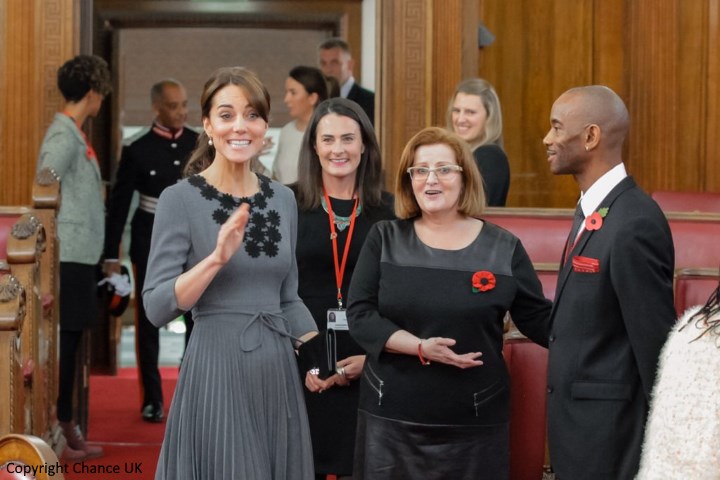 Kate chatted about her recent visit to the Natural History Museum with George. More from the Mail Online:

'Meeting the young people inside Islington Town Hall where the charity began 20 years ago, Kate sat down with Carl Goddard 10 from Haringey and his mentor Claire Butler, 29.

'Carl told her about the fox that he saw and she was interested in that.'
Carl said: 'I was a bit nervous (to meet her) but when I got my first word out it felt normal. I like coming to Chance and it's helped me to try new things out. I've started to try out new things, for example sushi. 'I was telling her (Kate) about what a good mentor should have.'


The Duchess revealed she would love to have special powers.

'Kate also sat down with Faith Buchanan, who is nine next week, and her mentor Elizabeth Little, 33, and saw the picture Faith had drawn and cut out of a princess during a trip to the Museum of Childhood. Written on the back were qualities Faith thought a princess should have, which caused Kate some amusement.

Faith said: 'On the back I've written about a princess. Elizabeth added: 'We pointed out one of the qualities is special powers and she said she wished she had special powers.'

Faith said: 'We were talking about insects and she said George likes them.'
Elizabeth said: 'She said George's favourite was the ladybird. It was amazing to meet her, Faith did all the talking, she was great and (the Duchess) was really interested in the charity.
'She seems very interested in early intervention, which is what the charity does. It's great that she's able to come here and learn more about the work we do.'


Kate shared a joke with Kensington after a private meeting with him where they discussed his experiences of being mentored at ten. 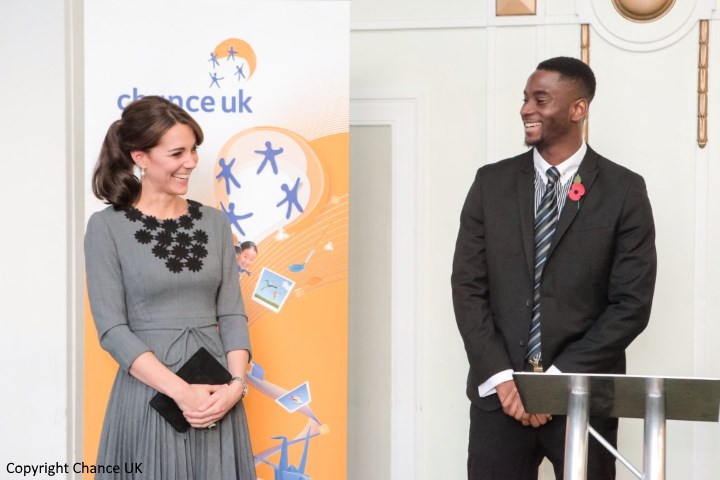 The Duchess repeated an Orla Kiely dress she first wore back in 2012 for an engagement with Charles and Camilla at the Dulwich Picture Gallery. 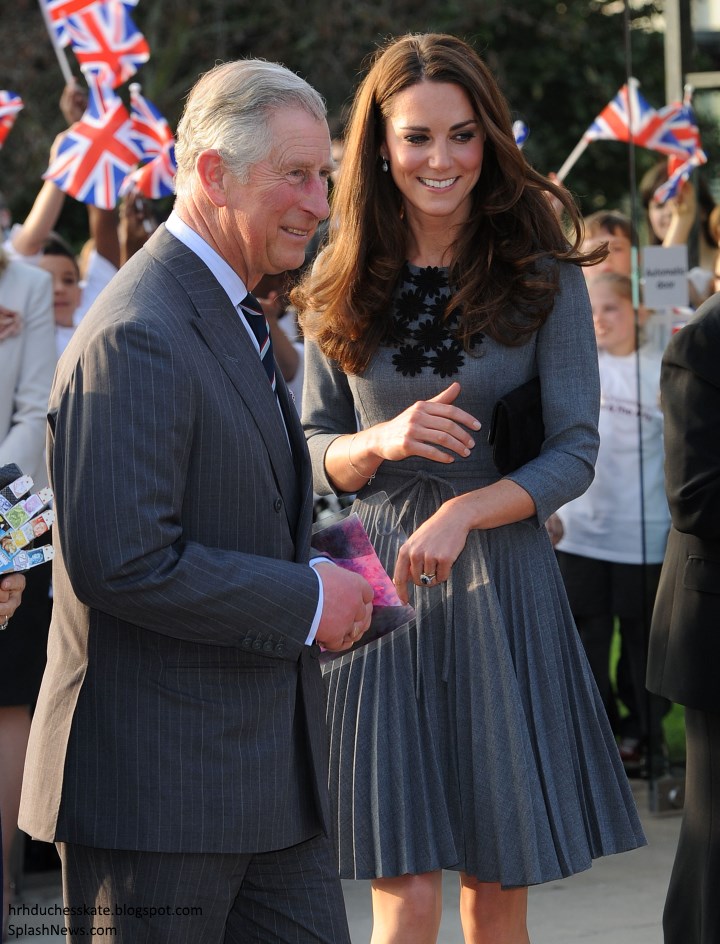 The grey dress has black floral motif at the neck, three-quarter sleeves and a pleated skirt. It comes from the designer's Autumn 2011 Collection.


Kate wore her hair in a pretty ponytail and accessorised with her Annoushka pearls. 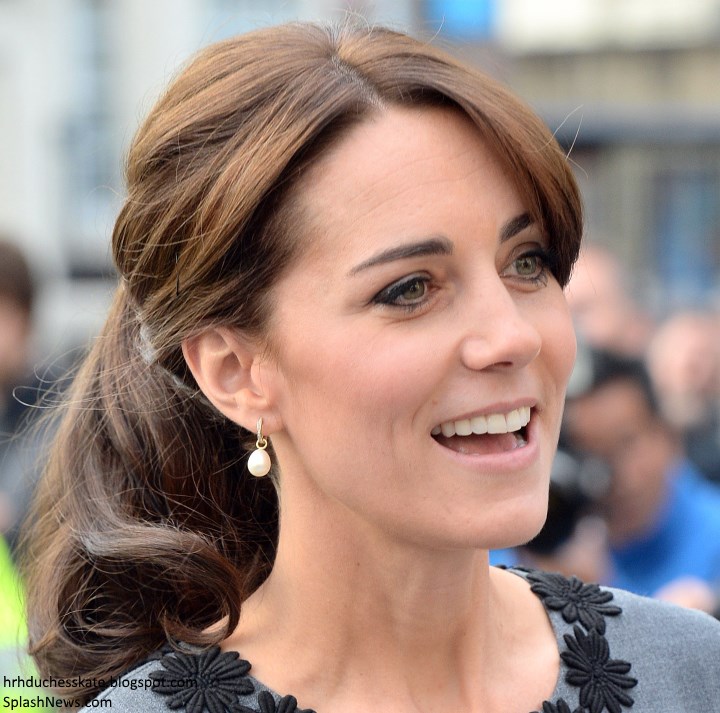 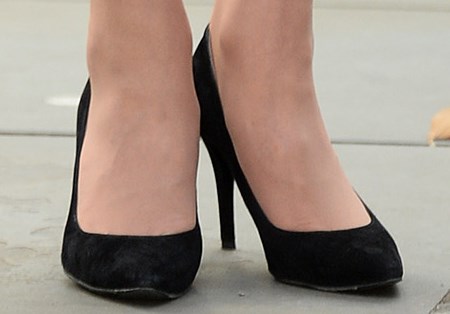 And completed the look with her Cartier watch.

A lovely look for the Duchess today. I much preferred the dress with Kate's hair up, allowing the floral motif of the dress to be shown off fully. What do you think?

Also today, the Duchess was photographed at the Natural History Museum on Tuesday wearing a black top, her Zara trousers and new black flats. It was a lovely look and great to see her enjoying an outing with George. Following the letter from Kensington Palace, I've decided not to publish pap shots of George and Charlotte. If Kate is photographed with them I'll review it on a case by case basis, or publish a pic of Kate without the kids in it. Many thanks for your understanding!

We'll see you tonight for the glamorous 100 Women in Hedge Funds gala. Do you all have any style predictions for Kate? A repeat or a new gown?
Posted by Admin at 15:23:00