It's Jenny Packham & Dazzling Earrings for Kate's Date with 007

The Duke and Duchess of Cambridge and Prince Harry added a royal seal of approval to the premiere of the latest movie in the James Bond franchise, Spectre. 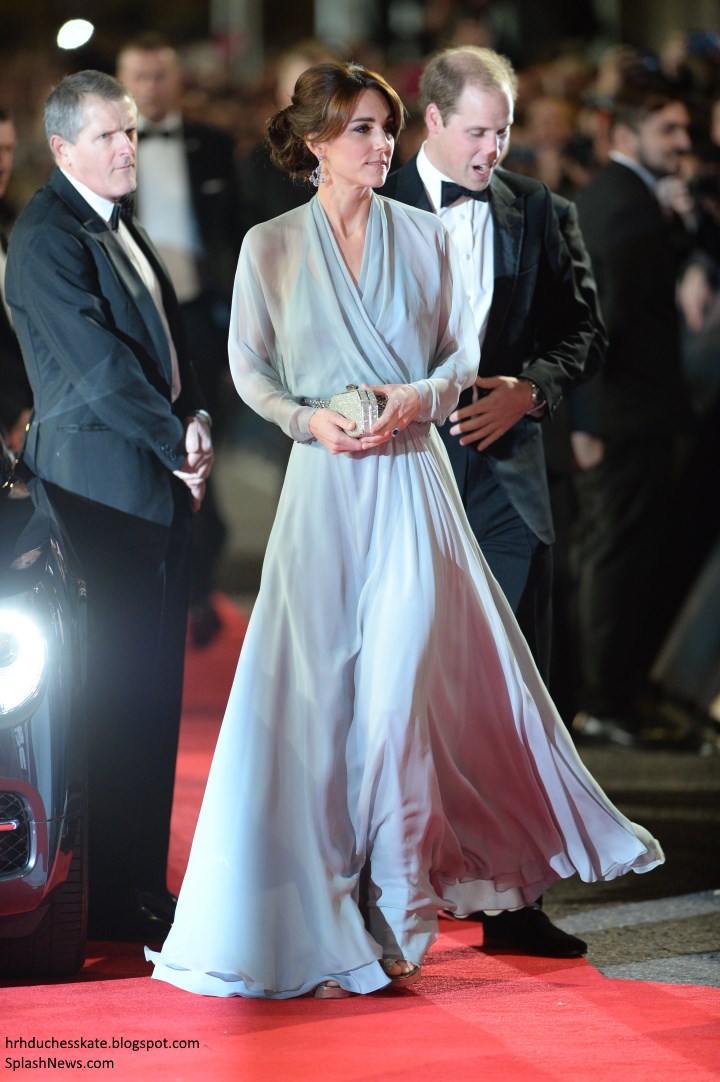 It was a glittering evening at the Royal Albert Hall with the royals joining a host of stars on the red carpet for what is undoubtedly one of the most eagerly awaited movies of the year. 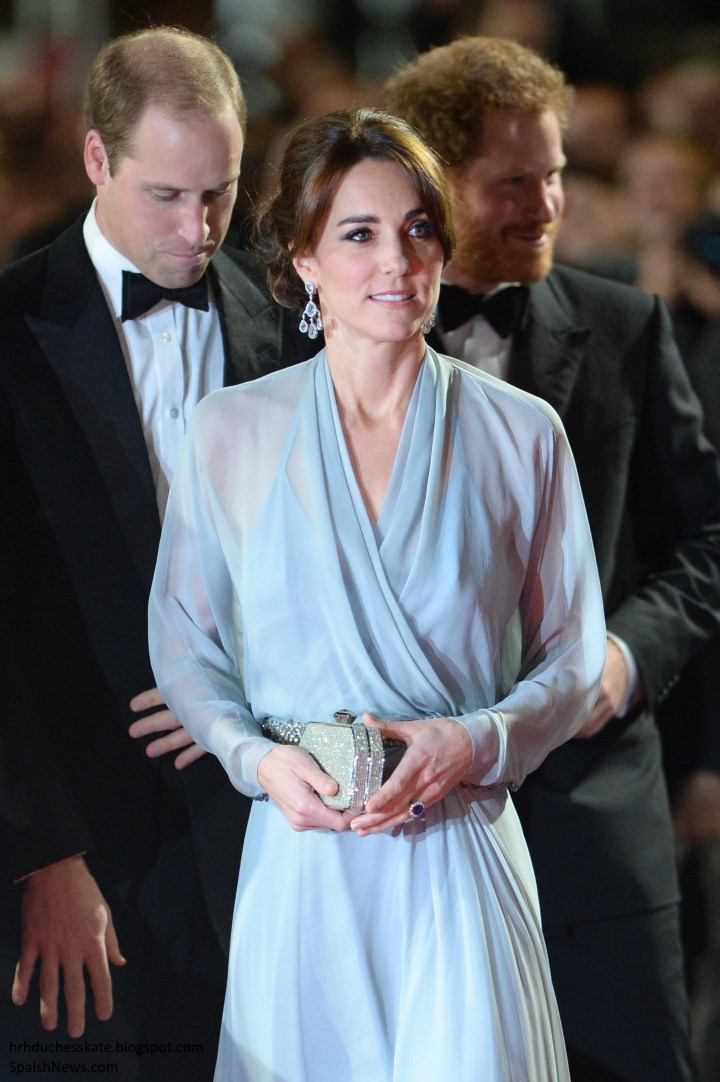 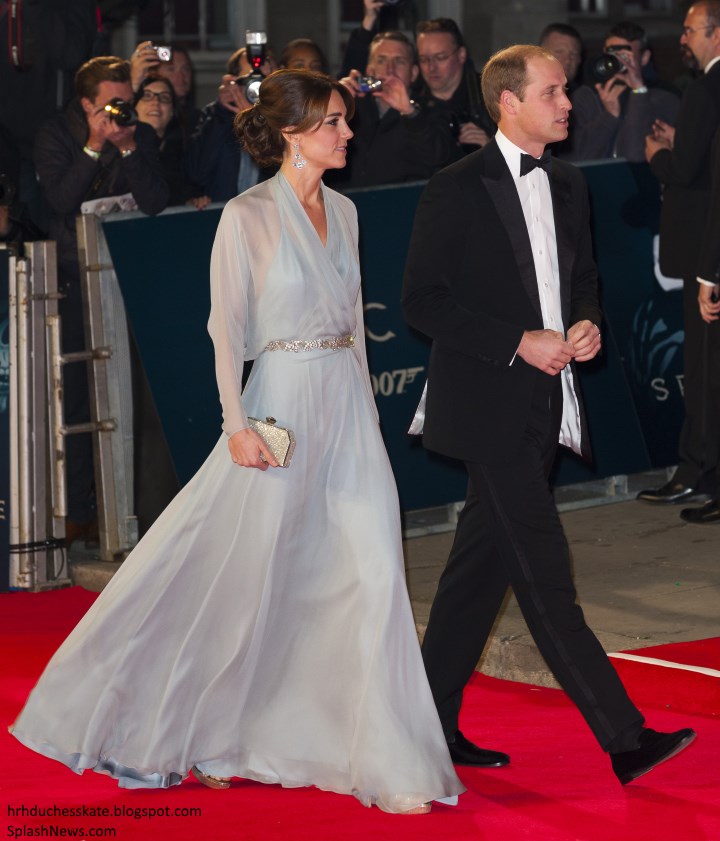 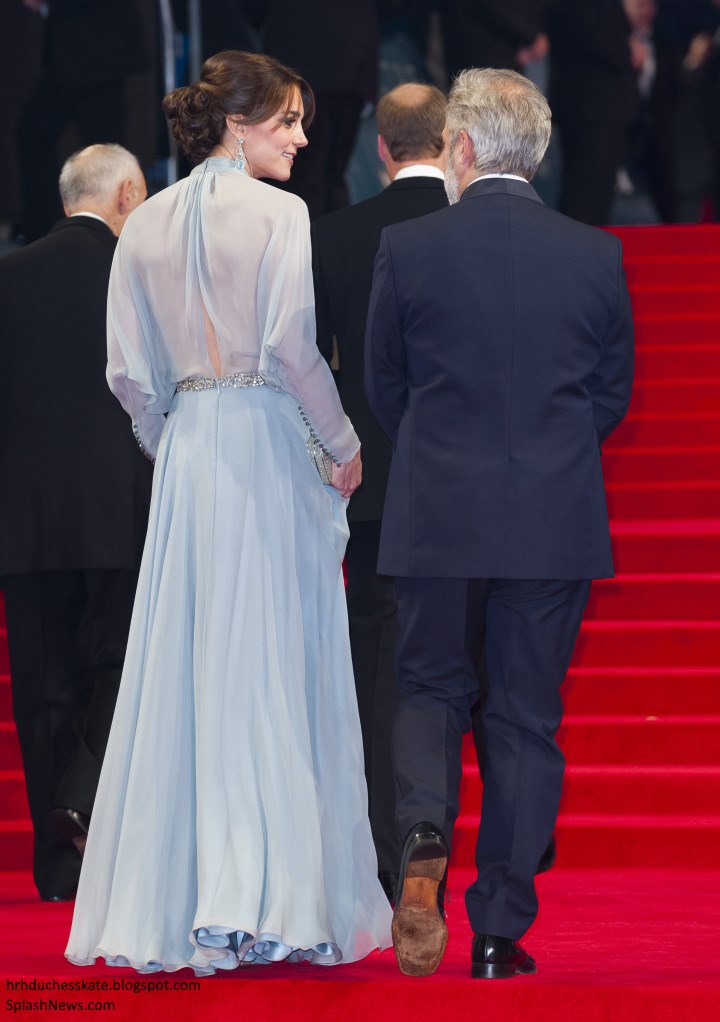 They were greeted by producers Michael G. Wilson and Barbara Broccoli, vice patrons of the CTBF. Before the performance William, Kate and Harry met trustees and beneficiaries of the fund. 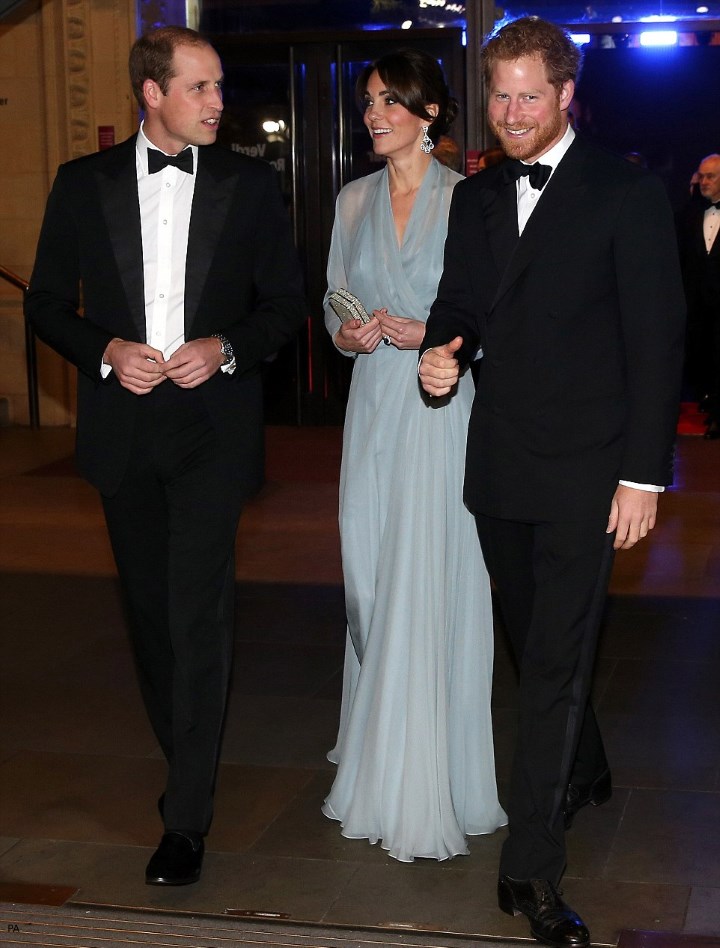 The trio looked delighted as they talked to the film's cast and crew, including 007 himself Daniel Craig, Christoph Waltz, Ralph Fiennes, Lea Seydoux, Ben Whishaw, Monica Bellucci and Naomi Harris. 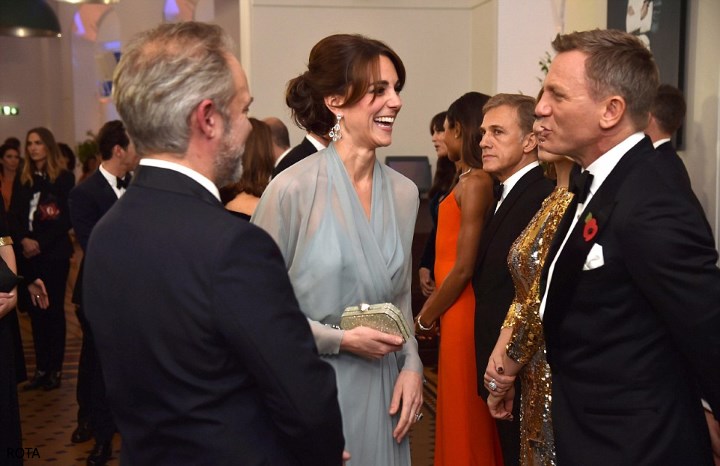 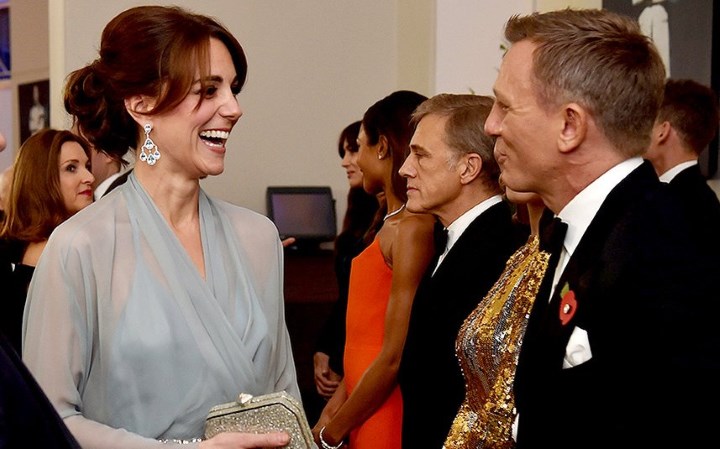 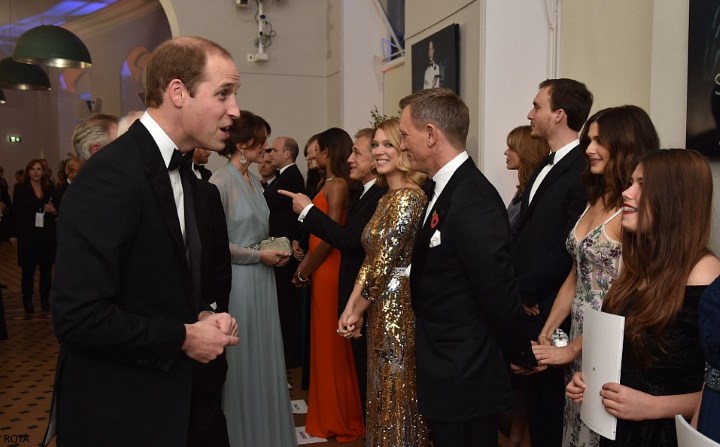 Prince Harry was so excited to meet Daniel Craig he asked him to sign his programme. You'll notice a lovely moment between the star and his wife Rachel Weisz. The actress looked amazing in Alexander McQueen. 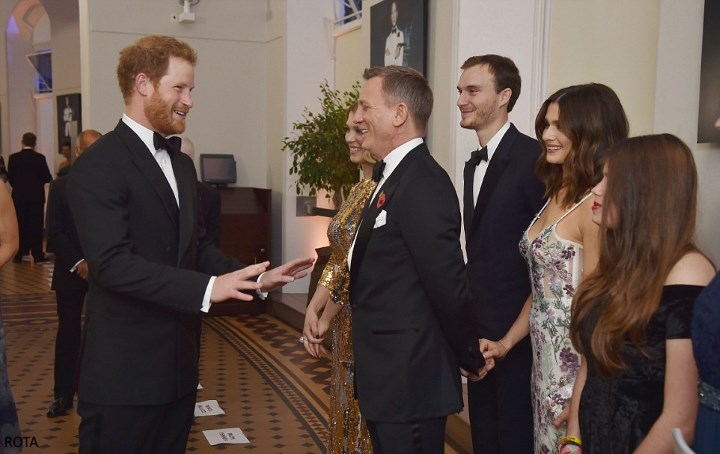 Our favourite photographer James Whatling shared a photo of the red carpet before the arrivals. 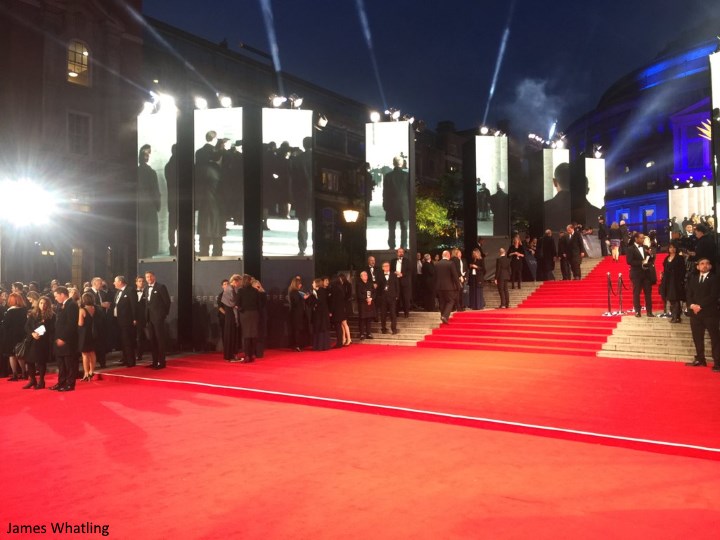 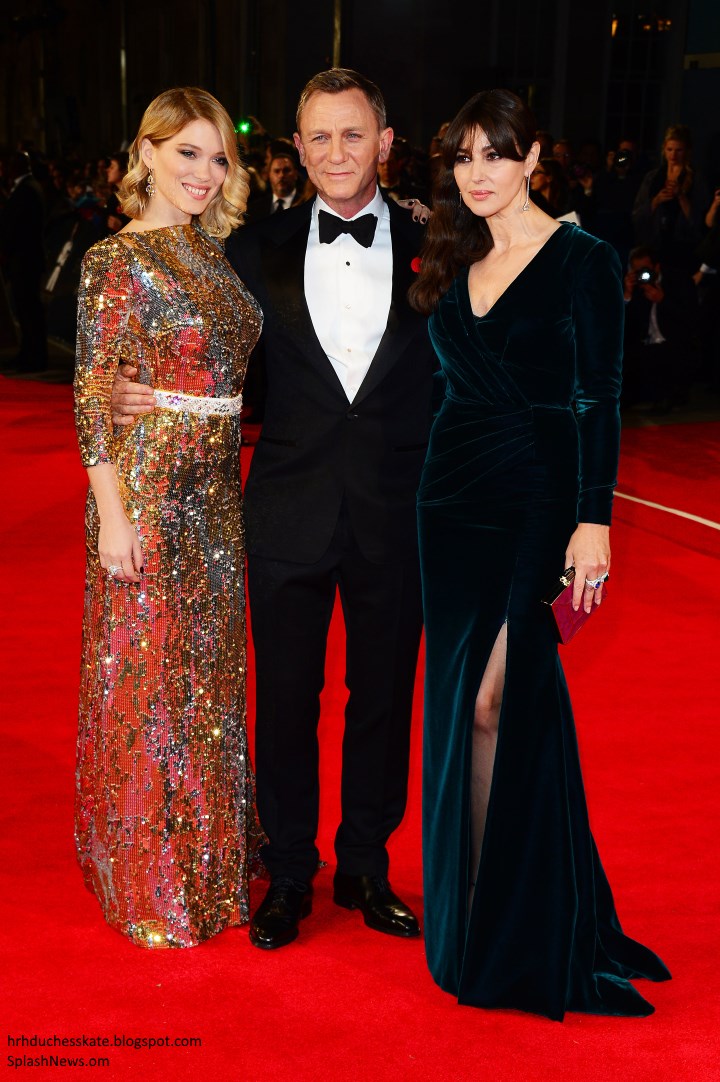 The actor posed for photos and signed autographs before giving interviews during which he said he was "very excited for everyone to see the movie". 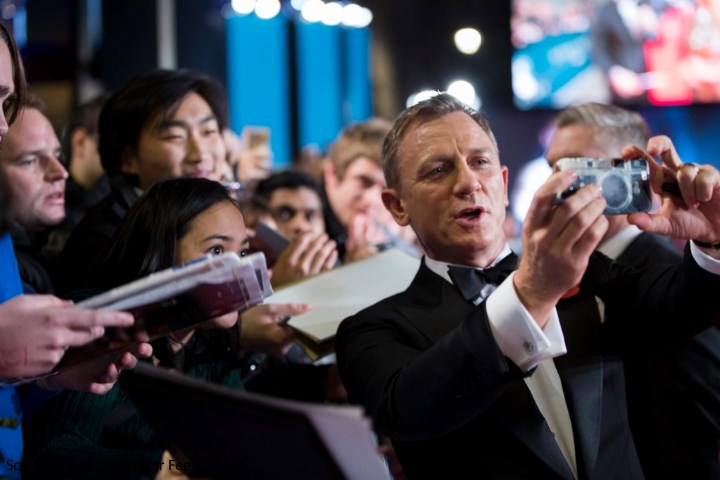 The Cinema and Television Benevolent Fund is the UK's leading charity for people working behind the scenes in the film, cinema and commercial television industries. It exists to support those who find themselves in need for one reason or another, and through donations, supported subscriptions and events such as tonight's performance, they are able to help over 1,000 beneficiaries and their families each year. 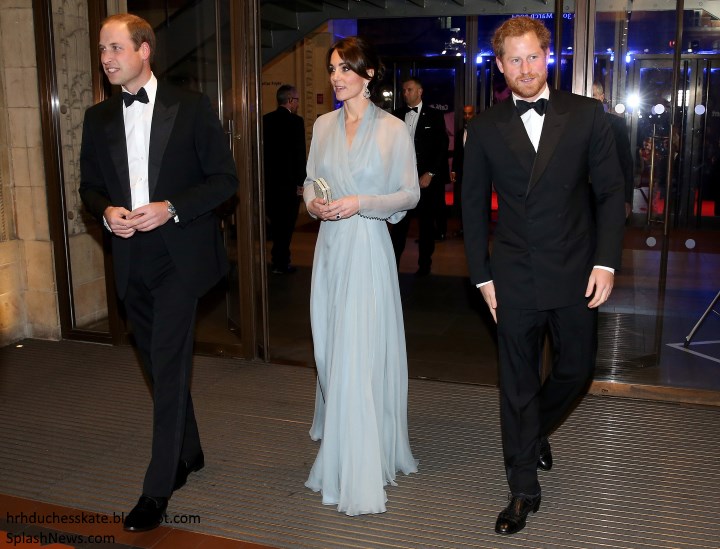 This year, William, Kate and Harry were invited to nominate two more charities to benefit from the event. These are Shelterbox, for their work providing emergency response and resilience building in Nepal following the earthquake, and Save the Children, for their work with children and families fleeing the conflict situation in Syria and Iraq and as one of the leading organisations managing the Ebola crisis in West Africa. Two incredibly worthy charities.

I'm sure many of you have seen the trailer and read the excellent reviews for Spectre. The 24th movie in the franchise, directed by Sam Mendes the film's synopsis reads: "A cryptic message from Bond's past sends him on a trail to uncover a sinister organization. While M battles political forces to keep the secret service alive, Bond peels back the layers of deceit to reveal the terrible truth behind SPECTRE.". 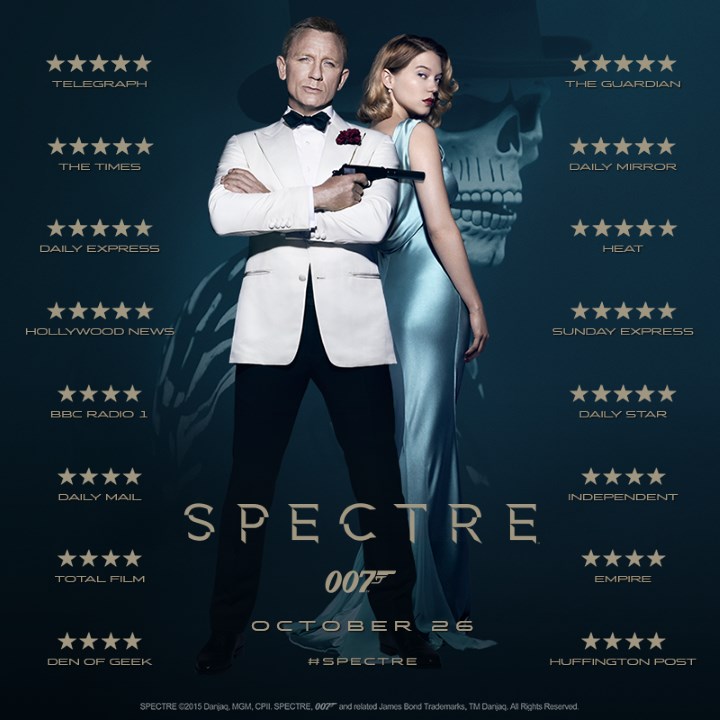 Featuring a stellar cast and stunning locations including Mexico, Morocco, Rome, Austria, and of course London, it promises to be a thrilling successor to the last movie in the instalment Skyfall, which racked up an impressive 1.1 billion dollars. Are you planning to see Spectre? As a huge fan I'm very much looking forward to it, and if you haven't seen the trailer you can view it here. 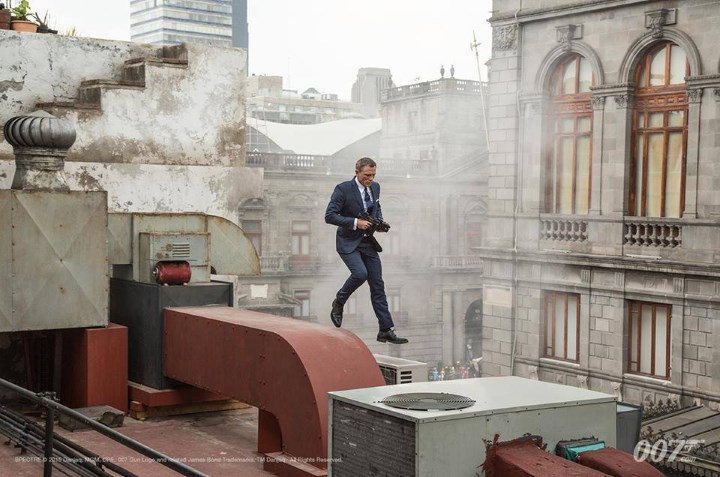 Spectre is the third James Bond film to be chosen as a CTBF performance, with Casino Royale and Die Another Day the previous two. Indeed, Her Majesty volunteered to appear in a James Bond sketch with Daniel Craig for the London 2012 Olympics opening ceremony. It was fantastic fun and lovely to see HM's lighter side. Click here to view it again.

William and Kate also attended The CBTF Royal Film Performance in 2013. Kate was elegant in the Roland Mouret Ella gown for the premiere of Mandela: Long Walk to Freedom. Below we see her chatting with actress Naomie Harris, who was also present tonight due to her role as Ms Moneypenny. 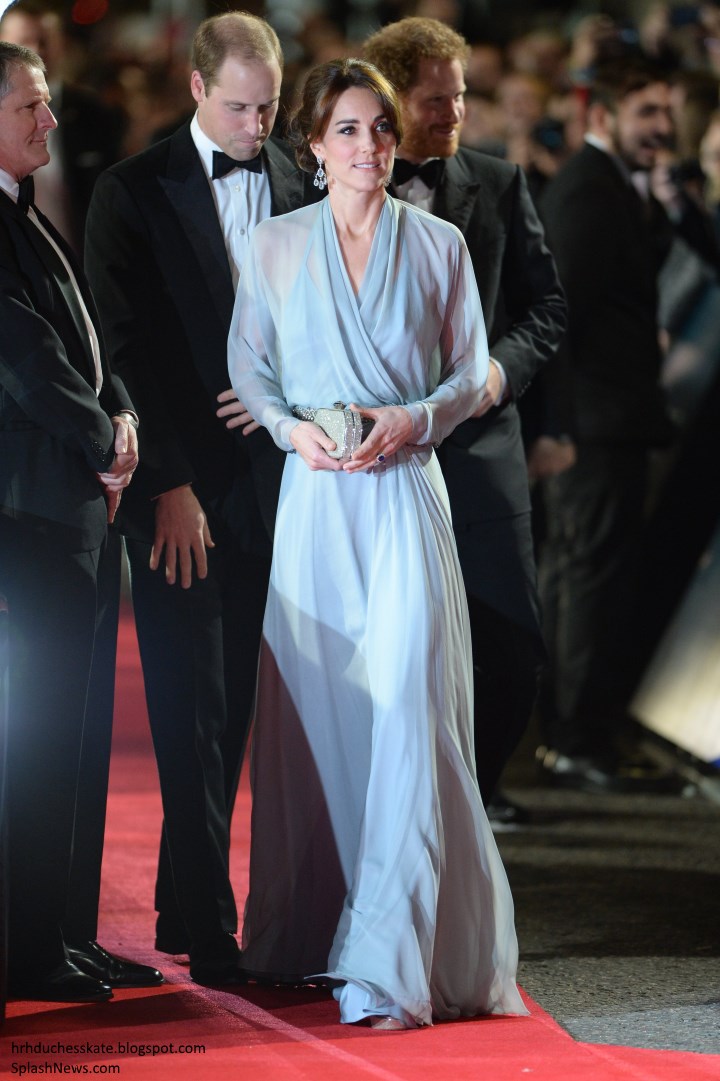 The back of the dress is beautiful. 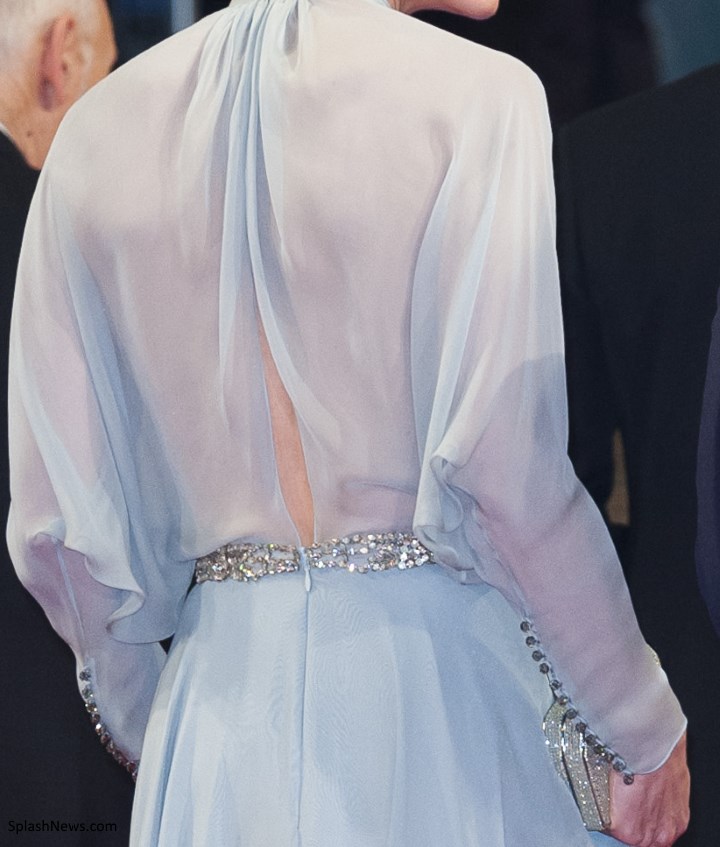 The gowns bears striking similarities to this Spring 2011 look by the designer, as noted by Kimberley.


The Duchess debuted a stunning pair of new earrings by Robinson Pelham, the jeweller who designed the earrings she wore on her wedding day (with thanks to Anna). 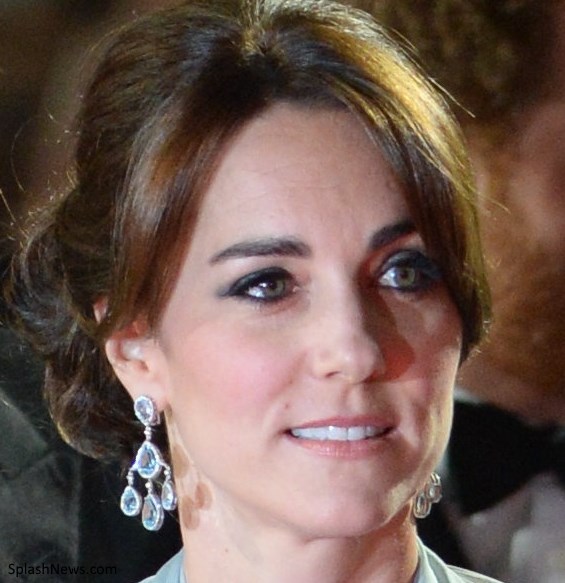 The striking pagoda earrings set with blue topaz and diamonds in white gold retail for £14,300.


Interestingly, the reason Anna noticed the earrings so quickly has another connection to the royal wedding. Kate's mother Carole Middleton actually wore them with a matching necklace for the wedding reception. One expects she may have loaned them to the Duchess as they complement her dress so beautifully. We've seen Kate wear her mother's pieces before.

A look at Kate's elegant updo. 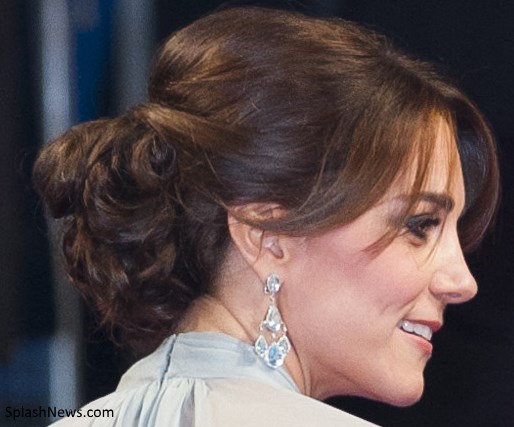 Ashley Marie identified Kate's new clutch as the £455 Casa by Jenny Packham. It is described as: "A glamorous evening bag, this solid frame box clutch features angular enamel and a crystal encrusted clasp. Complete with a silk cotton lining, small inside pocket and a matching mirror."


It was a wonderful evening full of all the glamour one would expect to see at a Bond premiere. I thought Kate looked radiant but the gown isn't a favourite of mine. What did you think of Kate's dress, accessories and earrings? You can view a video at ITN Source. 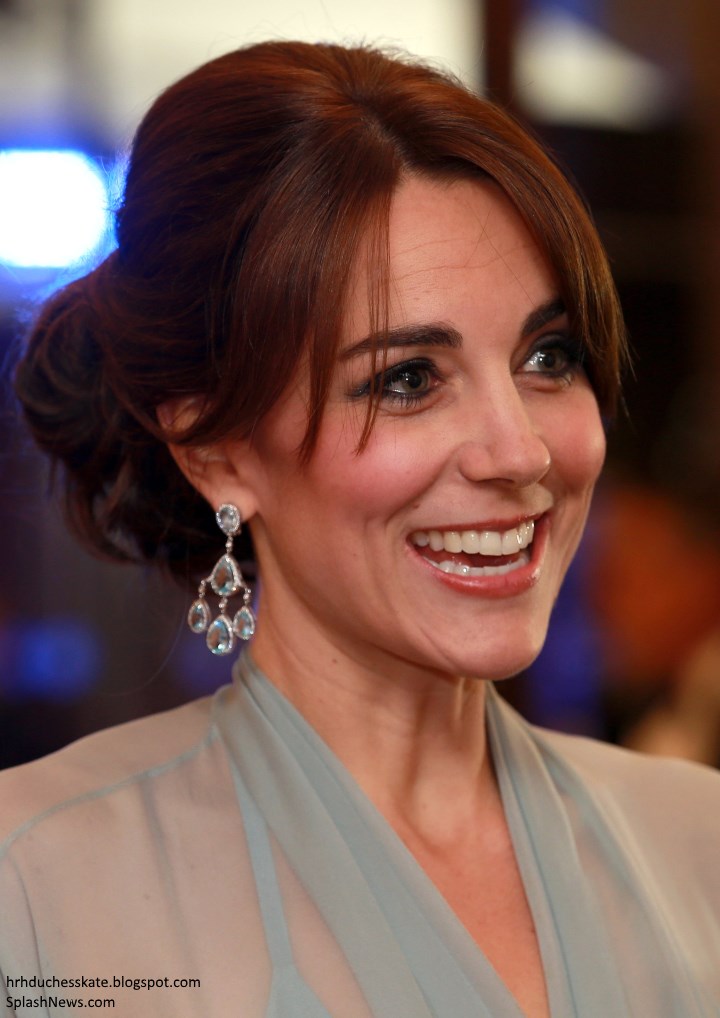 Tomorrow is another two engagement day! Kate will meet children and mentors from early intervention programme Chance UK. In the evening, it's the 100 Women in Hedge Funds Gala - meaning another gown appearance. See you all then! :)
Posted by Admin at 20:26:00