We're back with the latest news updates, taking a look at what William and Kate have been up to this week, and we have an exciting giveaway from Claudia Bradby.

First, Kate will join William and Harry on Saturday for the England versus Wales match at Twickenham. It was very much expected the royal trio would be in attendance for this game and it promises to be a night of friendly competition with William supporting Wales and Harry cheering on England. 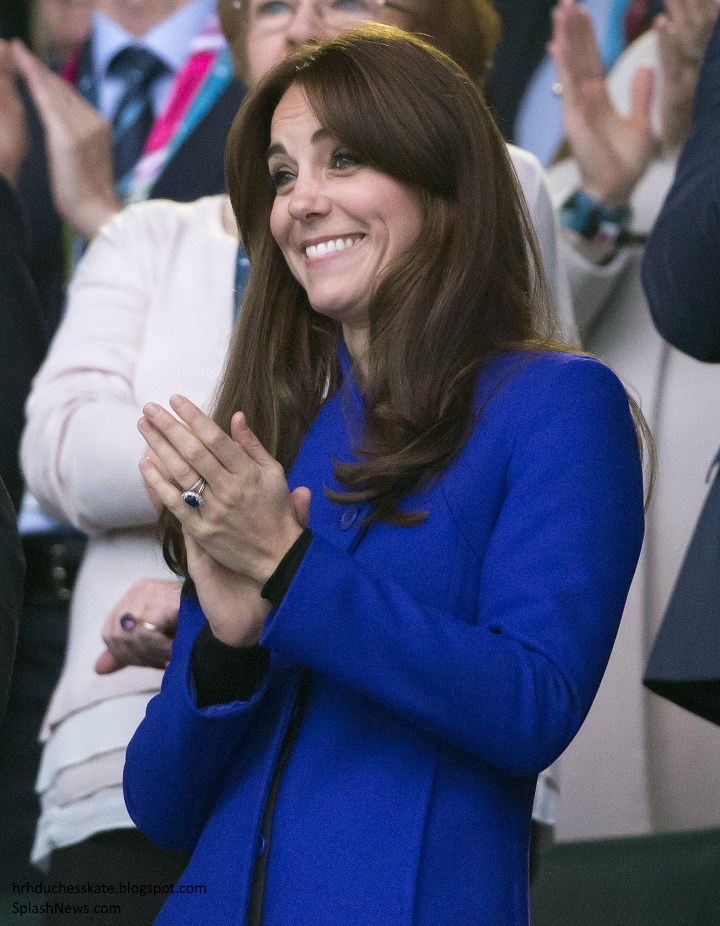 'The royal couple is also set to join Harry, 31, at Twickenham Stadium on Saturday for the England versus Wales rugby match (watch for the couple's rendition of the Wales team's national anthem, sung in Welsh!) For the brothers, it is a fun sporting rivalry as William is the Vice Royal Patron of Wales' team, while Harry is the equivalent for England.'


Kick off is at 8 pm, and  following Friday's appearance at the Rugby World Cup opening ceremony, Saturday's match is thought to be the second of several the Duchess will attend.

We have one other update regarding upcoming events. Simon Perry's story also notes William and Kate's participation in the upcoming state visit.

'Then, on the horizon, there is Chinese President’s State Visit to London next month, which Will and Kate are expected to help host alongside the Queen.'


An overview of the day's proceedings from the Household Division website:

'Visits normally begin with a ceremonial welcome attended by The Queen and other senior members of the Royal Family. If the guest is staying at Buckingham Palace, the welcome takes place on Horse Guards Parade.

After inspecting a guard of honour, the visiting President or Monarch then travels with The Queen in a Carriage Procession back to Buckingham Palace.

On the evening of the arrival day, the Head of State will attend a State Banquet in his or her honour.'


The Palace has not yet confirmed who will be attending the banquet, however, it is very much expected we'll see William and Kate there. October is shaping up to be an interesting month with the banquet on the 20th, the Spectre premiere on the 26th, a trip to Scotland, a BAFTA event and other, as yet, unannounced engagements.

What have William and Kate been up to this week? Kate was spotted out and about in London and did a spot of shopping at The White Company. It's been a favourite haunt of Kate's for years thanks to the brand's collection of impeccably stylish and contemporary pieces. From clothing and bed linen to beautifully scented candles and gifts, there's an abundance of choice.

Meanwhile, Prince William has been carrying out several engagements. Yesterday, the Princes joined forces and donned personalised hardhats as they joined the BBC's DIY SOS team in Manchester to help turn a street with derelict houses into homes for ex-service personnel.

'Over the past few weeks The Big Build: Veteran's Special have been renovating eight buildings, streetscaped an entire street and rejuvenating the façade of 62 houses to create the basis of a new mixed community for service personnel making the transition to civilian life, as well as for long-standing residents.

The re-development has also created a support centre on the street, run by Walking with the Wounded and the Royal British Legion to assist ex-servicemen and women with retraining and on-site support for those who have been injured – mentally or physically – while in the Armed Forces.

Servicemen and women who have made great personal sacrifices for our country deserve healthy, dignified, and successful post-military lives. Yet ex-service personnel account for a large percentage of the homeless in Britain. At the same time, there are currently over half a million empty properties in England. For this project, 26 houses out of the 64 on two streets have been gifted to Haig Housing, which runs housing schemes specifically for veterans'


During the visit, William, Harry and the team of builders and volunteers helped with the final stages of the project. The Duke and Prince Harry also met the street's existing residents and members of all the organisations who have contributed to the DIY SOS team's most ambitious project to date. The DIY SOS: The Big Build veteran’s special will be aired on BBC One at 9pm on 14th and 21st October 2015.


Marking the 75th anniversary of the Battle of Britain, William took to the skies during a visit to RAF Coningsby in Lincolnshire. The Prince met with Second World War veterans before taking the front seat in a Chipmunk training aircraft.

Perhaps William's most written-about public appearance over the past week was his visit to Hammersmith Academy in support of an anti-bullying campaign run by an organisation set up in memory of the late Diana, Princess of Wales.

During the visit, William was asked to name five people he would speak to if bullied or in times of difficulty. He listed Kate, Harry, the Queen, Prince Philip and Charles. He also mentioned Lupo!

At this time of year, with schools reopening recently, it's very sad to see statistics revealing a third of young people worry about going back to school because of bullying. More on William's visit from Kensington Palace:

'During his visit The Duke of Cambridge joined more than 50 young people from across London taking part in a training session focused on support networks, cyber-bullying and LGBT (lesbian, gay, bisexual, and transgender) bullying issues.
He watched as the ambassadors were taught to recognise signs of bullying and how they can encourage victims to seek help and speak out about their concerns.'


If you wish to find out more about the Anti-Bullying Pro programme or donate please click here.

Next, a word on the Ralph Lauren Silk Austin Shirtdress Kate wore to the Anna Freud Centre last week. 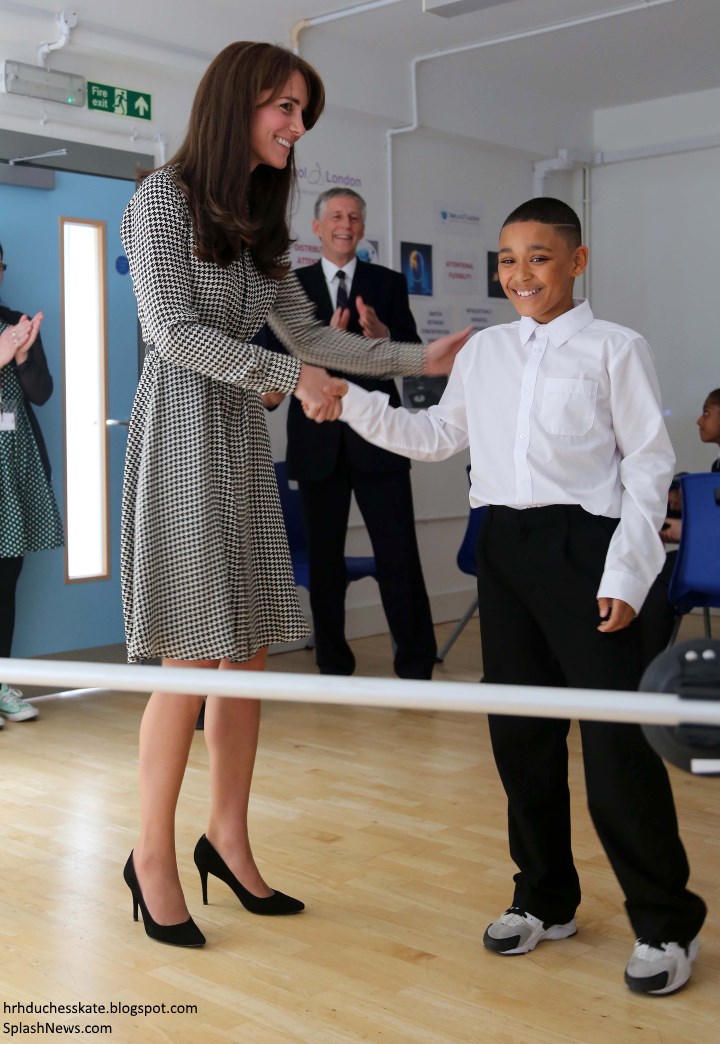 There was some chatter on social media about the availability of the dress given the fact we're used to seeing items worn by the Duchess sell out in a matter of minutes. I think the fact this particular garment hasn't sold out is clearly due to its price point. $1595 for a shirtdress is incredibly expensive, especially given the number of chic alternatives available on the high street. I imagine it's a piece we'll see Kate wear publicly a few times in the future given its classic style and silhouette. For those interested, the dress remains available at Ralph Lauren and Neiman Marcus in most sizes.

Now time for a fun activity we think you'll enjoy! To celebrate the launch of her latest collections, Claudia Bradby is giving away two of her most popular pieces and offering an exclusive 15% discount off all orders for readers.

Simply enter the code below at the checkout to avail of the 15% discount:


Let's take a look at Claudia's new Infinity Collection, featuring modern, sleek silver designs studded with freshwater pearls. Below we see the collection's Silver Hoop Earrings, Silver Ring Necklace, Silver Bangle and The World is Your Oyster Necklace, which is described as "a stylish gift for anyone embarking on new adventures".


The Glitterati Collection offer a combination of sparkling pyrite, diamonds and onyx with lustrous silver, white and peacock pearls. The glamorous collection contains a selection of statement pieces perfect for the upcoming party season. Below we see the Druzy Cabochon Necklace with the matching earrings and the Akira Tie Necklace.


The Lucia Couture Pearl and Pyrite Necklace and Bracelet.


A closer look at designs from the Essential Luxury Collection.


As many of you know, Kate collaborated with Claudia during her time at Jigsaw to create gorgeous designs, and these pieces are still available today. Below we see the much-loved Camellia Necklace Kate wore several times.


An updated version of the piece is also available - the Winter Camellia Necklace - combining silver pearls, lavender chalcedony, amethyst and pyrite on silver loops interlinked on a double silver chain.

The other designs resulting from the Kate and Claudia collaboration - the Kate Silver and Rose Quartz Earrings and Necklace - are in stock for £70 and £66 respectively.

Now, back to the giveaway! Entrants will have the opportunity to win the Kate Rose Quartz and Silver Necklace (a piece co-designed by Kate) and a stunning pair of Claudia's Biography Pearl Drop Earrings. The £105 earrings are a modern take on the classic pearls. The giveaway is open internationally.

Here's how to enter:

A reminder: those who sign up to the newsletter receive 10% off their first online orders.


Wishing all entrants the very best of luck, and a big thank you to Claudia and Hannah, who are always a joy to work with! We'll see you on Saturday night :)
Posted by Admin at 04:45:00