The Royals Attend Service of Commemoration at St Paul's Cathedral

The Duke and Duchess of Cambridge joined members of the Royal family for a service of commemoration to mark the end of combat operations in Afghanistan at St Paul's Cathedral, London. 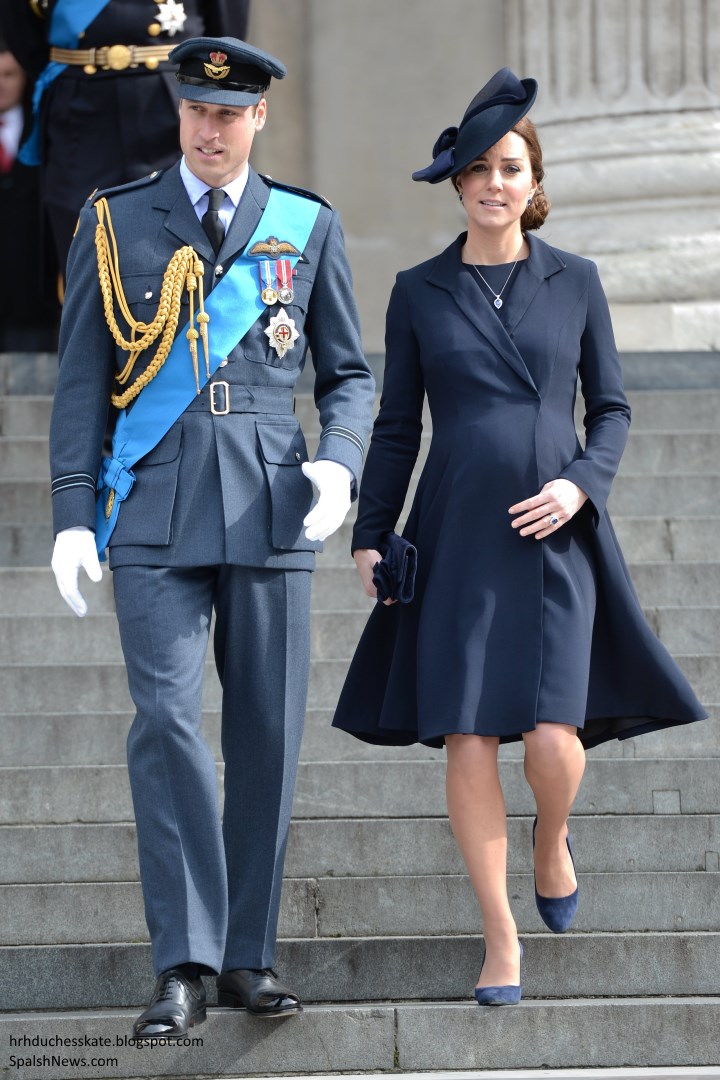 Other royals in attendance included Her Majesty The Queen, The Duke of Edinburgh, The Prince of Wales, The Duchess of Cornwall, The Duke of York, The Earl and Countess of Wessex, The Duke of Gloucester, and of course Prince Harry who served who served two tours during the conflict. 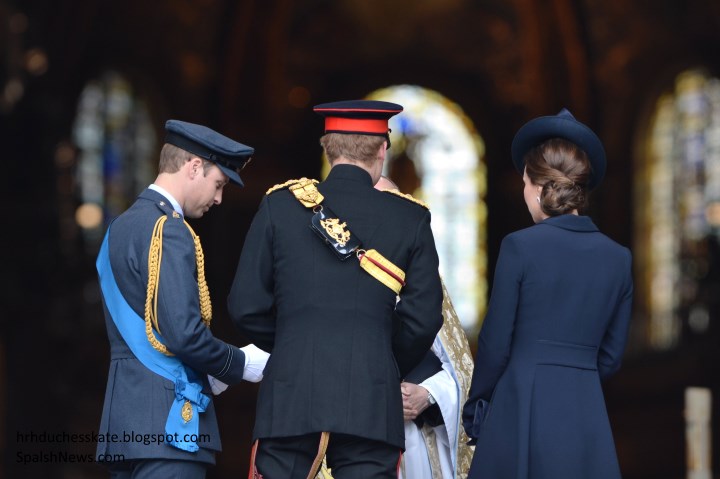 Some 2,000 people gathered at the cathedral this morning including hundreds of veterans and families who lost loved ones during the conflict. Political leaders whose decisions led to Britain's involvement in Afghanistan following the 9/11 attacks, including former Prime Ministers Tony Blair and Gordon Brown, were present. 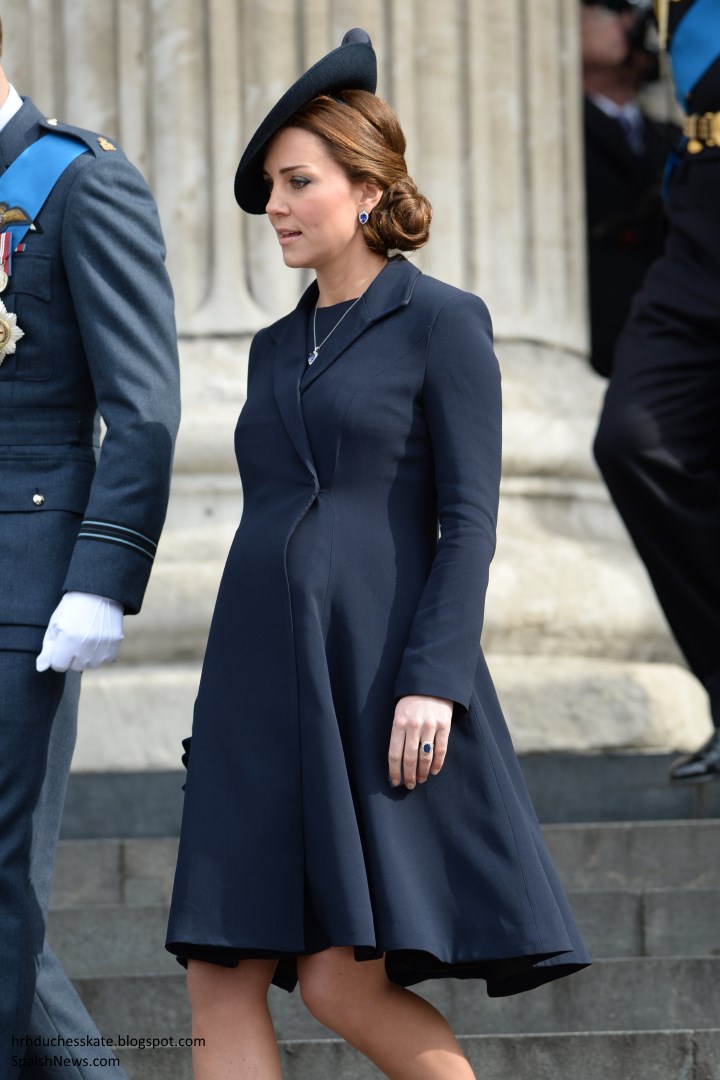 A great shot of the couple on the steps of the cathedral. 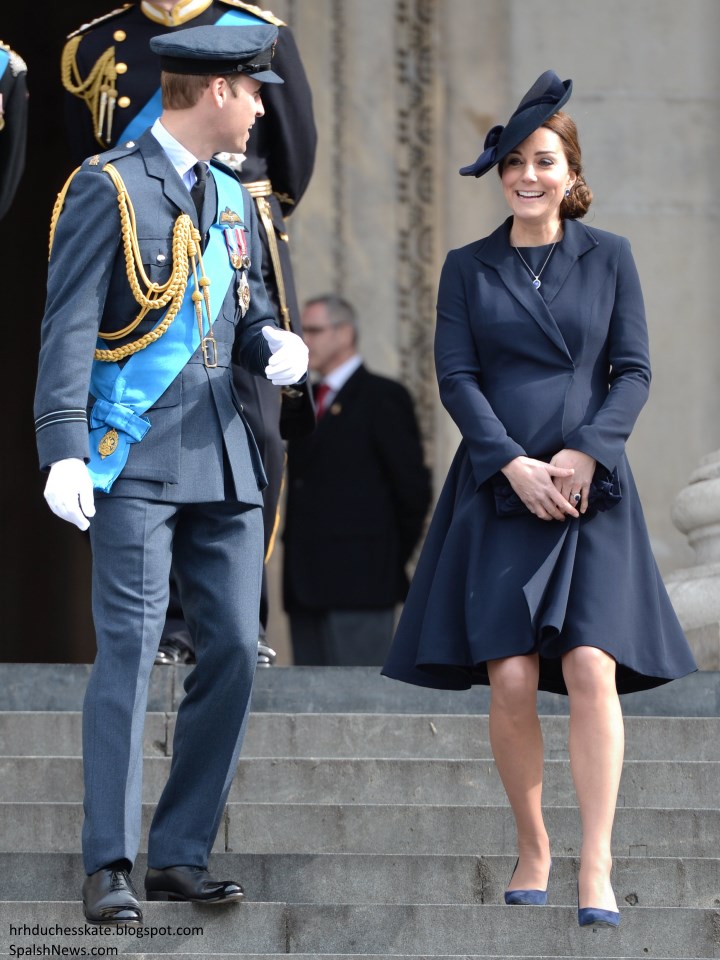 St Paul's Cathedral shared this photo of The Cambridges arriving. 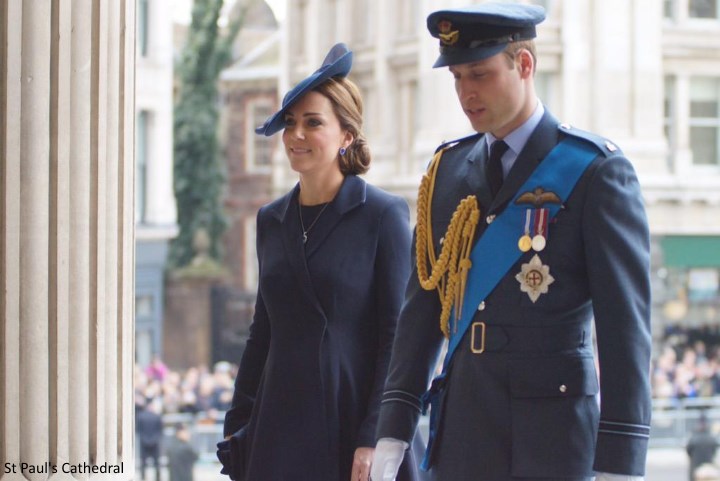 The tribute honoured the 453 Service men and women who lost their lives during the campaign. During the service, The Archbishop of Canterbury blessed a cross made of shell casings that adorned a memorial wall in Camp Bastion, ahead of forming part of a new Bastion Memorial Wall at the National Memorial Arboretum, to be dedicated at a special ceremony in June.

David Murray, chief executive of SSAFA, the Armed Forces charity spoke to The Telegraph about the service:

'It is an opportunity to recognise the courage and sacrifice of the tens of thousands of brave men and women who served in Afghanistan and to honour the 453 servicemen and women who lost their lives fighting for our country.

As Afghanistan makes the transfer from the front pages to the history books, let us not forget that our Forces have been doing their duty on our behalf, to keep us safe. They have had our backs, now is the time for us to have theirs.

Almost 150,000 UK personnel served in the Afghanistan conflict, and 453 British men and women died in the fight against the Taliban insurgency.'


The service was led by the Dean of St Paul’s Cathedral, with the address given by The Archbishop of Canterbury. Prayers will be said by members of the Armed Forces, veterans and families.

St Paul's Cathedral is one of the most famous and most recognisable sights of London, with its dome, framed by the spires of Wren's City churches, dominating the skyline for 300 years. At 365 feet (111 m) high, it was the tallest building in London from 1710 to 1962, and its dome is also among the highest in the world. In terms of area, St Paul's is the second largest church building in the United Kingdom after Liverpool Cathedral.


A photo of the choir rehearsing for the service yesterday.

The step liners in place.


The order of service can be viewed on the cathedral's official website. Below we see a snippet from The Bidding Prayer led by The Very Reverend  Dr David Ison.

'We commemorate with sorrow and regret those who have died in these operations, and pray for their families and friends and for all who mourn their loss. May they rest in peace and rise in glory.

and death and loss that they too have known, and the danger which people in that great country continue to face today. May they share in the many riches which earth affords and contribute actively to the good of the international community.'


The congregation sang 'God Save The Queen.'

A look inside the service.

For her first military engagement in 2011, Kate honoured Irish Guards who served in Afghanistan. The Duchess chose a striking military style Alexander McQueen ensemble for the event. 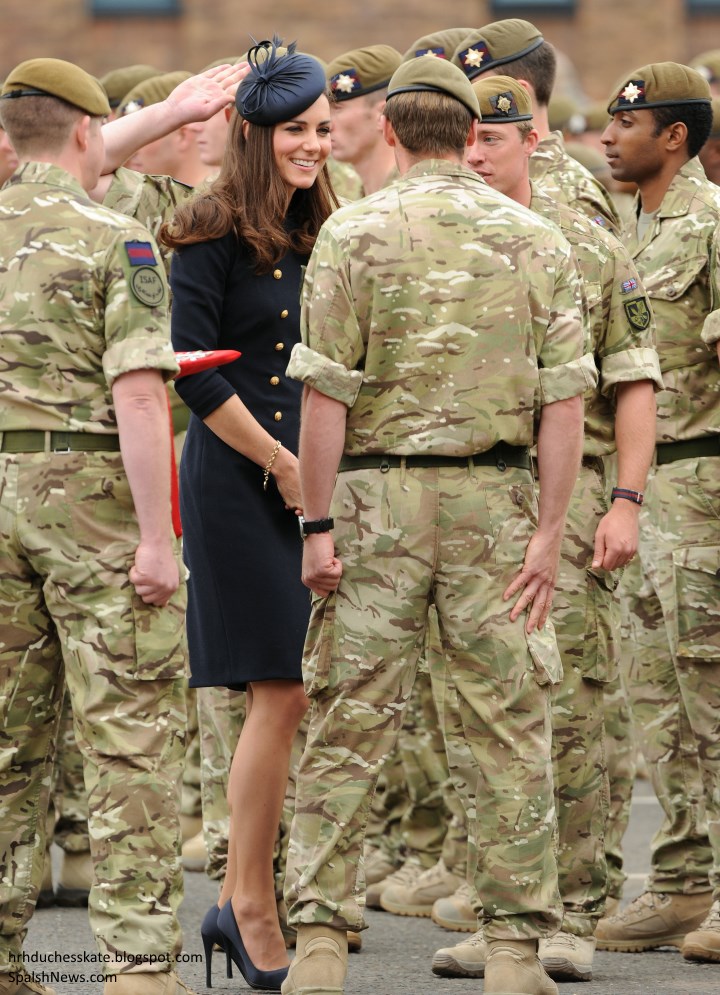 Senior members of the royal family leaving the service led by the Queen. 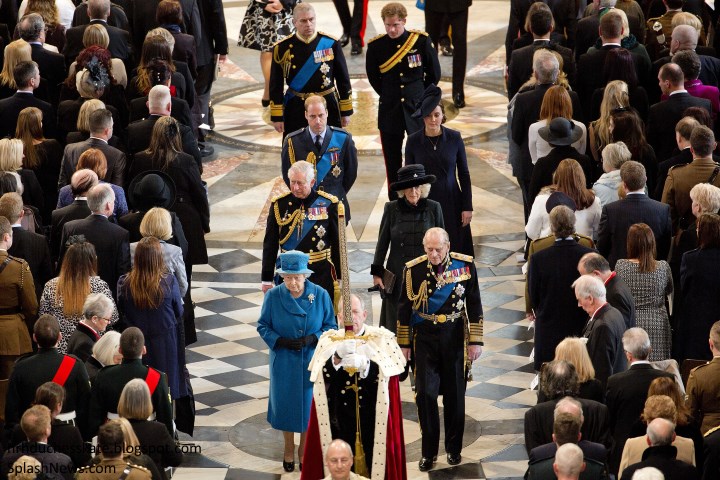 We saw an unusual and touching sight as Prince Philip helped the Queen descend the steps of the cathedral. Several onlookers noted Her Majesty looked quite tired today. 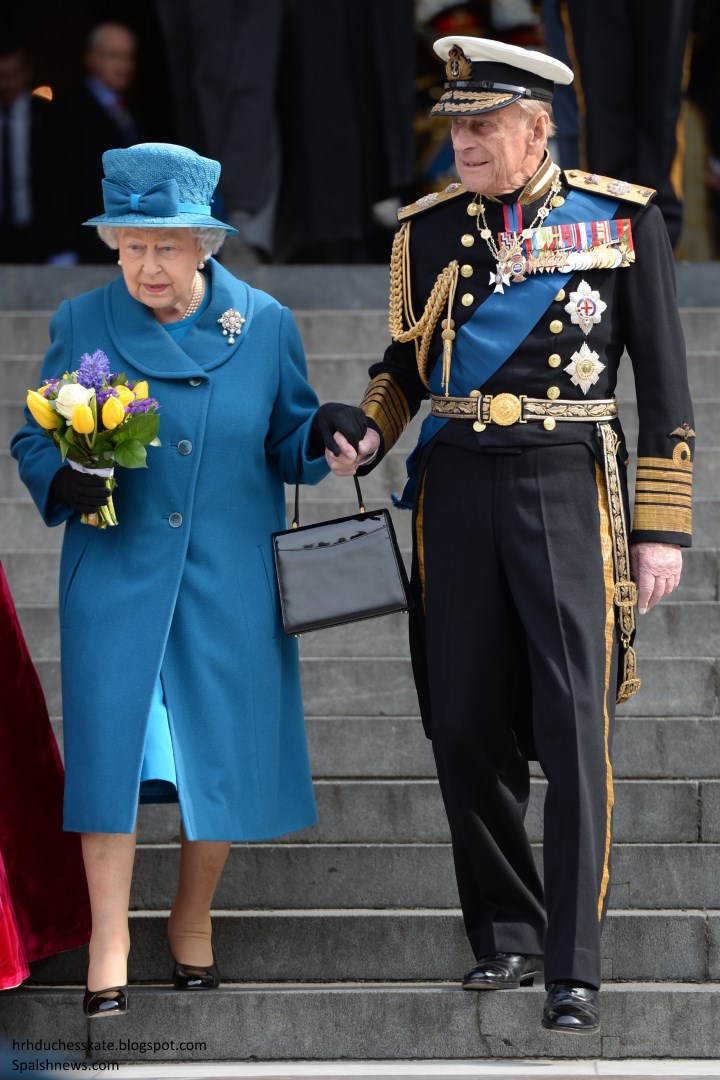 William and Kate with The Earl and Countess of Wessex and The Duke of York. 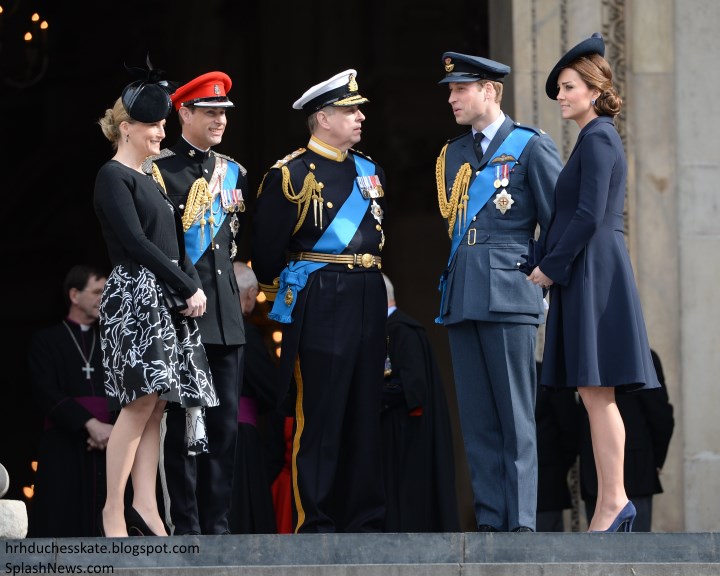 Following the service, personnel who served in Afghanistan paraded from St Paul’s Cathedral through the City of London to Guildhall. 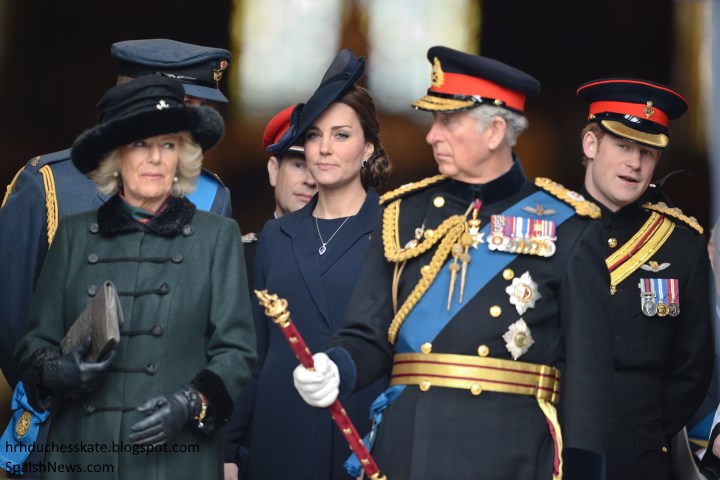 There was a spectacular flypast too. Aircraft from the campaign, including Chinook, Apache and Sea King helicopters, as well as Hercules transport planes and Tornado attack jets, roared over the parade in their own salute.


William, Kate and Harry looked up.


After the parade, members of the Royal family will attend receptions at Guildhall, the Honourable Artillery Company and Wellington Barracks for those who attended the service and took part in the parade. Prince William is expected to attend one of these receptions; Kate isn't pencilled in to join him.

I immediately recognised Kate's chic coat as a piece by Beulah London. The navy Chiara trapeze coat is described as "extremely flattering" It features a nipped in waist with soft folds at the hem. It was the perfect choice for the nature of the engagement and looked incredibly elegant on Kate.


Beulah London confirmed they did not design the garment Kate wore underneath. 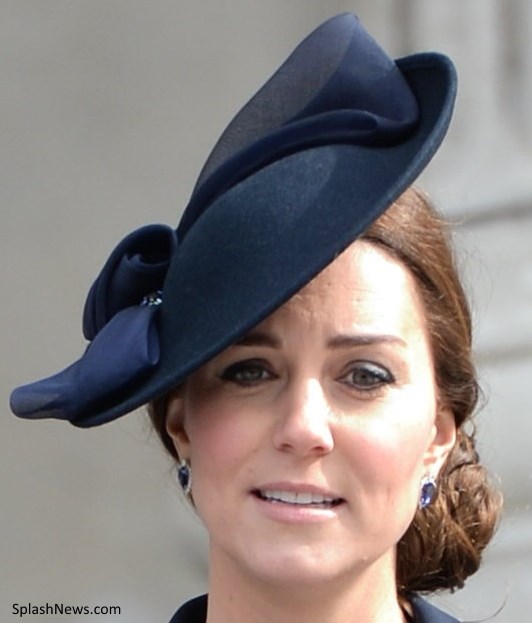 Whilst watching the service, I noticed Kate adjusting the hat quite a lot. This is evident in several photos from this morning too. Luckily her prince was on hand to assist her down the steps :) 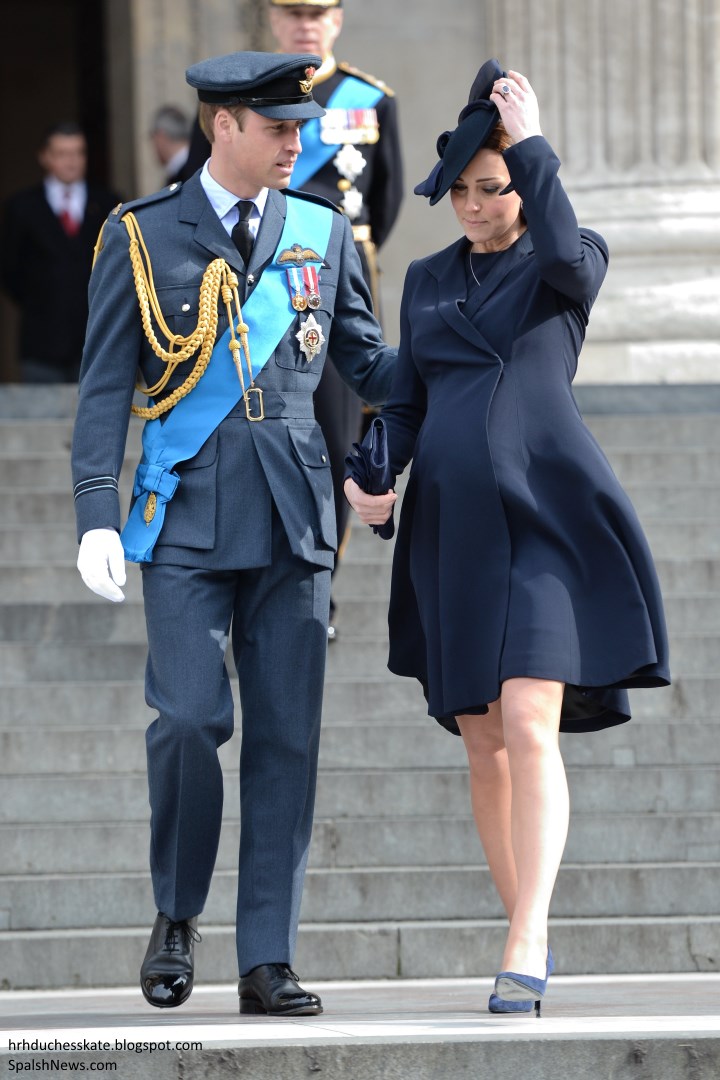 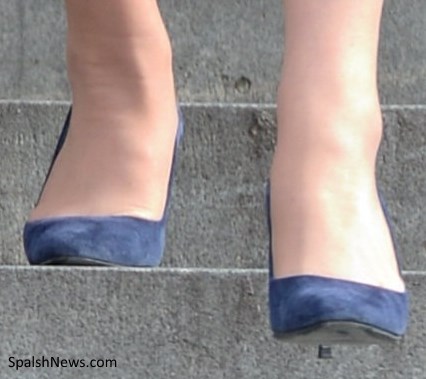 The Duchess wore her Cornelia James gloves and carried her Russell and Bromley Muse Clutch, known as the Stuart Weitzman Raz Clutch bag across the pond. 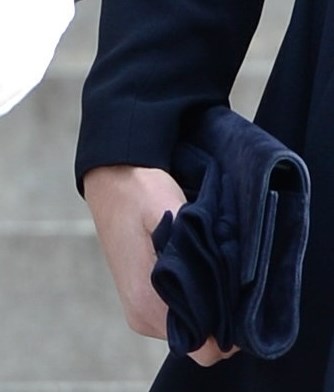 Kate's hair was styled in a beautiful chignon. 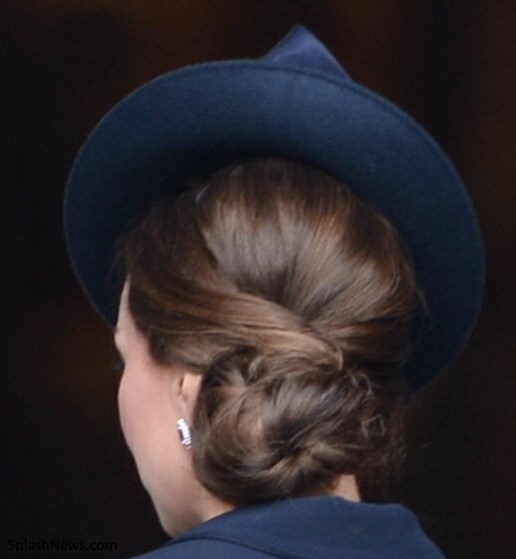 We spotted some beautiful new jewellery on Kate. 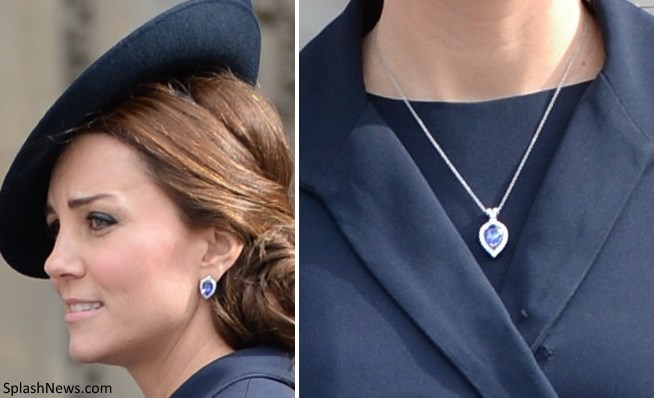 Following endless searching the team at My Small Obsessions finally identified the stones as pieces by G Collins & Sons, a jewellery favoured by The Countess of Wessex.  The stones come from Tanzania in Africa, We know the Duke and Duchess are both fond of Africa.  Below we see the Tanzanite and Diamond Pendant at G Collins & Sons. The pear shaped pendant are available for £8,400. Kate's exact earrings are not available at this time.


It was an outstanding look for the Duchess; regal, sophisticated and understated - exactly what the occasion called for. The Beulah London ensemble fitted perfectly and Kate's new jewels added a touch of sparkle to the navy look. What do you think?

We'll see William and Kate on 17 March for the St. Patrick's Day Parade at Aldershot. In the meantime, we hope you all have a wonderful weekend. It's been such a fun week of royal watching :)
Posted by Admin at 11:42:00