We hope you all had a splendid weekend!

We're enjoying the Academy Awards red carpet with a glass of chardonnay, and as Fashion Week is underway, tonight's post will be very much focused on the event and a jeweller Kate's started to wear. Before we get to the glitz and gowns we'll do a quick wrap up of several news stories of interest.

The Mail on Sunday reports the Duke and Duchess of Cambridge are searching for new domestic staff for their country home Anmer Hall following the departure of their housekeeper and gardener. 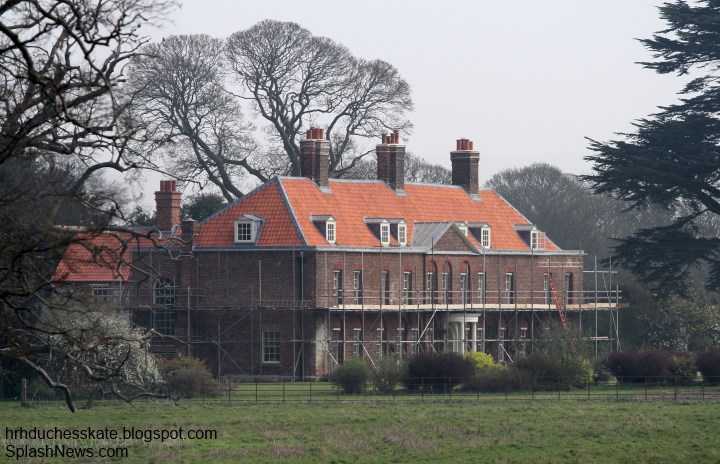 More from the article:

'It remains unclear why Amy Wood and her husband Colin handed in their notice after less than five months at Anmer Hall on the Sandringham estate in Norfolk. The couple started working for William and Kate last September when restoration work was being completed on the Georgian mansion.

They had previously been trusted employees at Sandringham House two miles away, and it is thought that they will go back to work for the Queen there. William and pregnant Kate moved into the 18th century hall with their baby, George, in October after it was given to them by the Queen. Mrs Wood, 34, looked after the ten-bedroom house while her 37-year-old husband worked in the garden. He had been doing landscaping and planting work at the hall. '


Next, we have two updates regarding Prince William. As previously reported the Prince has been taking a number of exams in preparation for his new role with East Anglian Air Ambulance. The BBC reports:

'Royal sources have said the Duke of Cambridge will still be taking up his post in the spring as planned, but he will not be flying until the summer.

He will be employed by Bond Air Services, which operates two helicopters on behalf of the charity based in Cambridge and Norwich, serving Bedfordshire, Cambridgeshire, Norfolk and Suffolk. The prince has been taking a series of exams in preparation for his new role with the charity, where he is due to earn about £40,000 a year. He is due to donate his after-tax salary to charity.'


The Telegraph has an interesting article about William's upcoming historic trip to Japan and China.

'Indeed, in a reflection of the significant diplomatic role being assumed by the Duke, it is expected that he will meet Li Keqiang, the Chinese premier, and other senior Communist Party leaders during the three-day visit.

Penny Junor, the royal biographer, said: “Not only is this a historic visit, but it is also an indication of how highly regarded William is by the Government and Foreign Office. After all, this is not going to be an easy trip. His father is a friend of Tibet’s Dalai Lama and there is the question of human rights.'


Details of the trip, which begins on Feb 26, can be found on the official website. It's been reported Kate will not have any engagements during this time, however, I think we'll see her once or twice before she takes maternity leave. The annual St Patrick's Day Parade at Aldershot is a likely one to finish up with.

Next, we're taking a look at a new jewellery brand debuted by the Duchess last month - Mirabelle Jewellery. Below we see Kate wearing the brand's £30 Lolita earrings.

The small gold-plated earrings are a very pretty and affordable addition to any jewellery collection. They look considerably more expensive than they are and work for day or night wear.


As we know, the 'Kate Effect' on fashion is quite something. Speaking to the The Inquisitr, Mirabelle Jewellery founder Veronique Henry spoke about the reaction and the story behind the hand-made Fair Trade earrings.


'Our website crashed, it went absolutely mad but I’m beside myself with happiness! She got them at the jewellery boutique ‘Felt’ in Chelsea. They are very popular earrings, but now even more so since she wore them. They are made in Indonesia by just one family. That’s the great thing about Kate wearing these — they are made in a little village by a lovely family. So now all the cousins, aunties, everyone in the family are rallying round to help out.'


Veronique called the family personally to let them know that their earrings were worn by the Duchess of Cambridge and they were "thrilled". It's one of those times where it's just lovely to hear the story behind the style and how Kate wearing a pair of earrings can have an effect on a family living so far away and enable them to grow their business.

More on the benefits of Fair Trade from the website.

What is Fair Trade? Fair Trade is a tool for reducing poverty in developing nations. It's a form of Trade that builds equitable and long-term partnerships between producers in developing regions of the world and consumers in the north.

Fair Trade Guarantees many things including the following: Producers receive a minimum set price for their goods, financial and technical support, healthy and safe working conditions, economic development of their communities, and educational opportunities for their children. Consumers receive excellent products plus the peace of mind that comes with knowing they are actively addressing poverty, preserving the environment, and promoting an end to child labour.

The Planet receives a chance at health and healing since Fair Trade actively promotes sustainable farming techniques, biodiversity, and bird and animal preservation.


There's several great collections available on the website. The Vintage British Collection has some fabulous little gems with unusual details. Below we take a look at the Ballerina Pendant with Pearl (the ballerina has articulated legs), the Cladagh Gold Plated Pendant and the Scotty Dog Pendant with Semi Precious Stone.


Pieces from The Natural Pearls Collection.


There's a good sale underway with some great statement pieces on offer. The Mini Key and Coin Pendant is reduced from  £45 to £24, the Gold Plated Earrings with Seagreen Glass are reduced from £60 to £24 and the Ovala Necklace with ruby is discounted from £75 to £48.


I've always been a supporter of Fair Trade products and it's great to see such a business which actively supports and incorporates it doing so well. Hoping to see Kate in more Mirabelle pieces!

Moving on to Fashion Week! Many of Kate's go-to designers have been showcasing their Autumn/Winter 2015 Collections. We saw British designer Jenny Packham channel Marilyn Monroe for her spring offering. This time round, there's a much cooler vibe. The designer was inspired by a trip to the Prado Museum in Madrid.


Reviews of the collection focused on textures, and use of lace and velvet. The signature Packham embellishments is as evident as ever but are somewhat softer with Art Deco motifs used heavily.


Jenny Packham's star is on the rise with her clientèle ranging from the Duchess of Cambridge to Charlize Theron and Taylor Swift. There's plenty to like and many choices for Kate. I have no doubt we'll see one of these designs, or at least a bespoke version on Kate this year.


Ms. Packham with the models backstage.

Emilia Wickstead turned to director Wes Anderson for inspiration although she first called him 'Wes Gordon'. "I'm pregnant by the way. That's my excuse," she said after correcting herself.

It's very much what we expected to see from the designer, apart from the inclusion of a couple of rich gowns. I know like myself, many readers don't always love the designs on Kate. They look great on the runway but often times the structure of the garment doesn't quite work. Again, there's plenty of possibilities for Kate. What do you think?

I particularly look forward to seeing the Temperley London shows. This one was quite different to its predecessors and offered very little I could envisage the Duchess wearing, though there are some great white shirts, coats and dresses which could be altered for Kate. 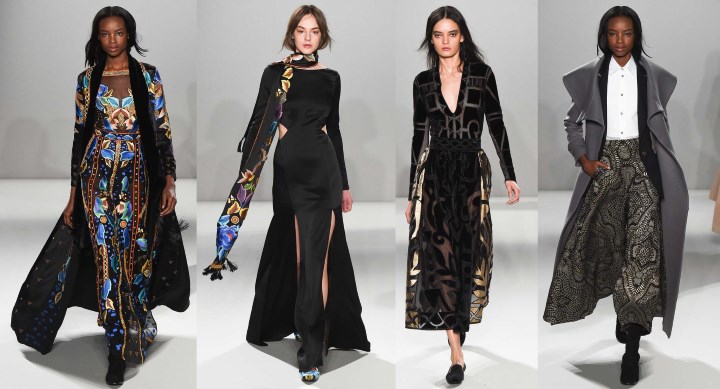 We leave you with four looks from Mulberry's Fall 2015 Collection. The navy skirt suit on the left would look incredible on Kate.

Who were your favourites from fashion week? Did you spot any Kate designers at the Oscars? :)
Posted by Admin at 04:23:00