Kate in Beulah London for Weekend in Bucklebury!

We're back with a brief post as the Duchess of Cambridge features on the cover of German newspaper Bild today.


Kate was photographed leaving local spar store Peach's in Bucklebury, Berkshire. The Duchess spent the weekend at the Middletons' Georgian mansion Bucklebury Manor. As we know Kate is incredibly close to her family and enjoys spending as much time as possible with them and they are obviously a very central part of George's upbringing.


The owners of Peach's were invited to the royal wedding in 2011. Shopkeeper Hasmukh Shingadia revealed before the wedding Kate regularly pops in for her favourite Haribo sweets and William is partial to mint Vienetta ice cream: "We've really got to know Kate. She is caring and she is not like a celebrity". 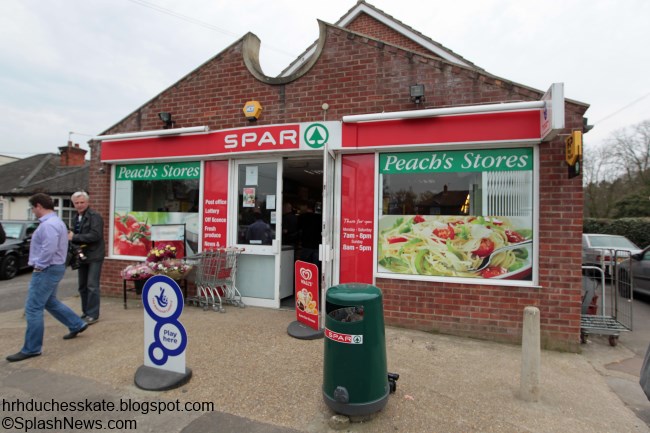 One excited onlooker spotted Kate, Pippa and Prince George in a traffic jam on the M4. She said Kate spotted her and waved: "She's stunning in real life". Below we see a very blurry pic taken by the royal fan (with many thanks to Ashley Marie). She also noted Prince William was travelling behind them in another vehicle.

The cosy knit is adorned with the brand's signature white love hearts. It is described as a "front panel jacquard crew neck jumper". It was on sale in grey reduced from £250 to £125 before selling out.

Beulah shared this snap on their instagram account several months ago. A perfect choice for a growing bump.

There are several other similar items on sale at Beulah London at the moment including the 'Twilight' sweater and 'Amala' scarf.


It's nice to see Kate spending time with her family and enjoying normality. We'll be back with our polls post next :)
Posted by Admin at 17:49:00