The Cambridges began their final day in New York with a sombre visit to the National September 11 Memorial Museum. 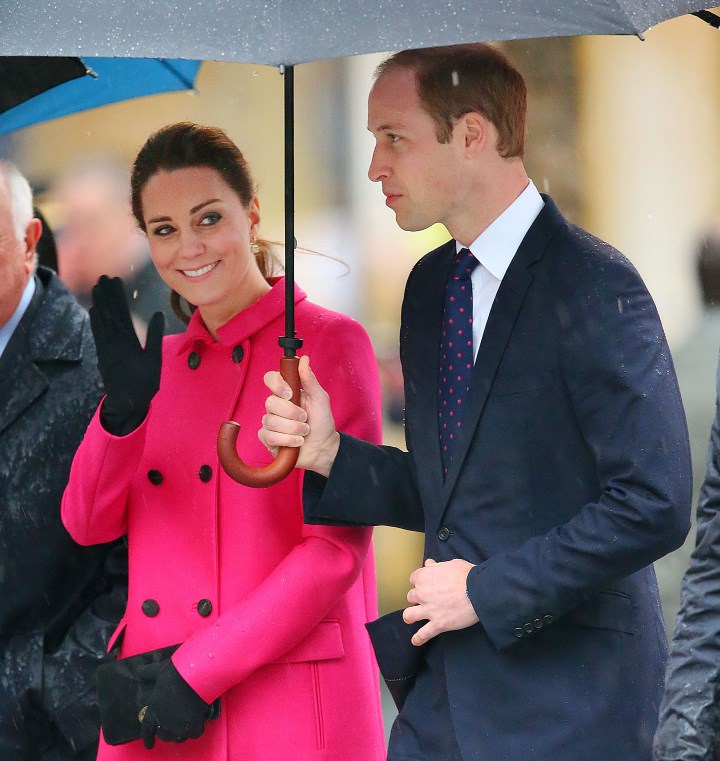 The couple had a moment of reflection as the Duchess laid a wreath of roses - the state flower of New York. Prince William held an umbrella over Kate as it was raining quite heavily this morning. 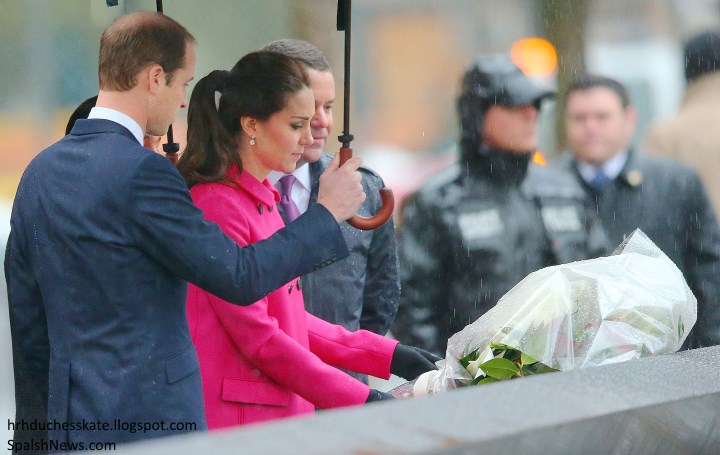 A closer look at the roses laid.

'In sorrowful memory of those who died on 11th September and in admiration of the courage shown to rebuild. 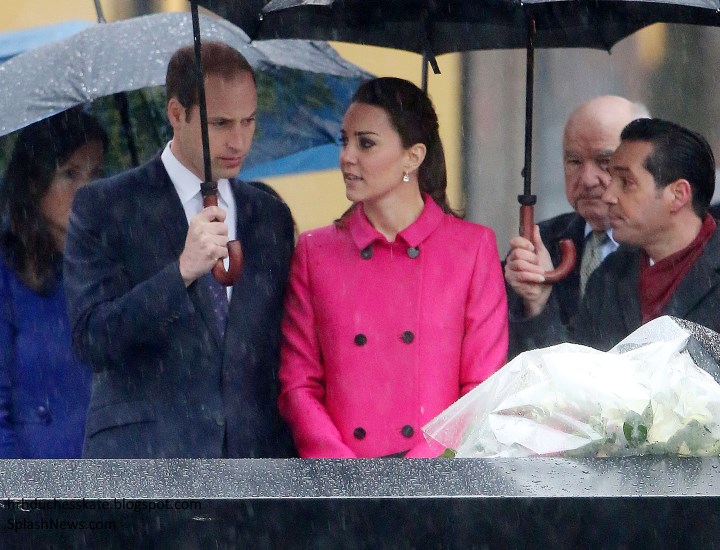 The Memorial's twin reflecting pools are each nearly an acre in size and feature the largest manmade waterfalls in North America. The pools sit within the footprints where the Twin Towers once stood. Architect Michael Arad and landscape architect Peter Walker created the memorial design which was selected from a global design competition that included more than 5,200 entries from 63 nations.

The names of every person who died in the 2001 and 1993 attacks are inscribed into bronze panels edging the memorial pools - a powerful reminder of the largest loss of life resulting from a foreign attack on American soil and the greatest single loss of rescue personnel in American history.

A callery pear tree that was recovered from the rubble at the World Trade Center in October 2001 was later called the 'Survivor Tree'.

We can all vivdly remember where we were when news of the attacks broke. Although I was only ten years old I'll never forget the images of the news. I thought it particularly important for the Cambridges to pay their respects at the memorial and draw the media's eye towards this special place of remembrance.

The Duke and Duchess then toured the museum.

The museum serves as the country's principal institution for examining the implications of the events of 9/11, documenting the impact of those events and exploring the continuing significance of September 11, 2001.

The couple viewed a portion of the North Tower antenna.

The museum's 110,000 square feet of exhibition space is located within the archaeological heart of the World Trade Center site - telling the story of 9/11 through multimedia displays, archives, narratives and a collection of monumental and authentic artefacts. It presents intimate stories of loss, compassion, reckoning and recovery.


I was surprised to read the 9/11 Memorial and Museum does not receive any city, state or federal funding and relies on the support of visitors and donors. If you wish to support the memorial amd museum please click here. All donations and sponsorships are dedicated to developing and sustaining a last place for remembrance and reflection.

The couple also visited the lobby of One World Trade Center, the tallest building in the Western Hemisphere.

Next, William and Kate visited The Door youth organisation where they viewed art performances. 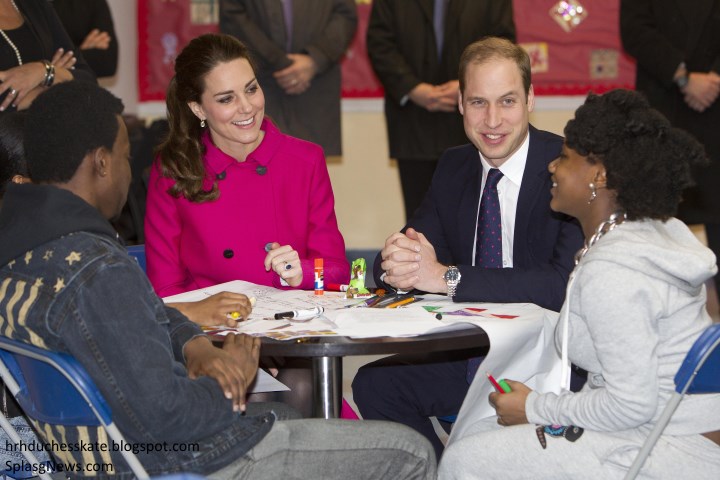 The Duke and Duchess visited the organisation to see the work the carry out in partnership with the CityKids Foundation. Both organisations focus on programmes and projects that promote youth development and social learning. 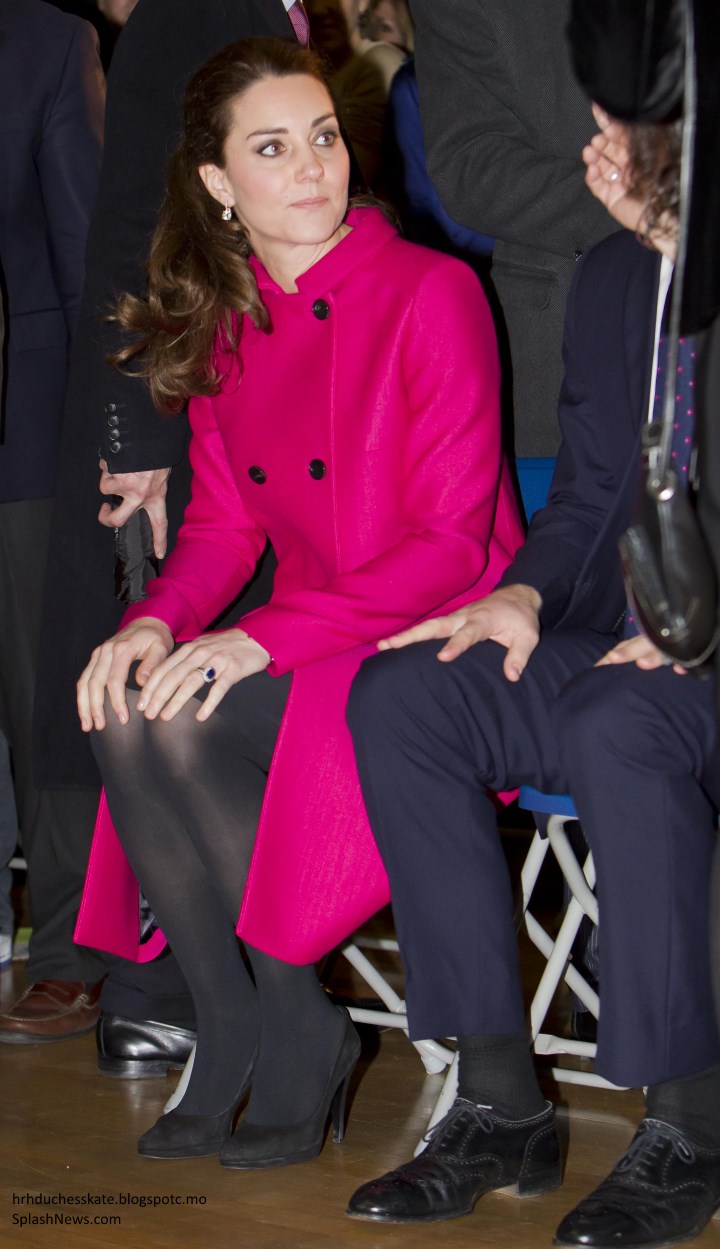 The couple learned about the wide-ranging support services on offer to young people to help them reach their potential, particularly through an arts-education model that supports the artistic and intellectual development of the participants. 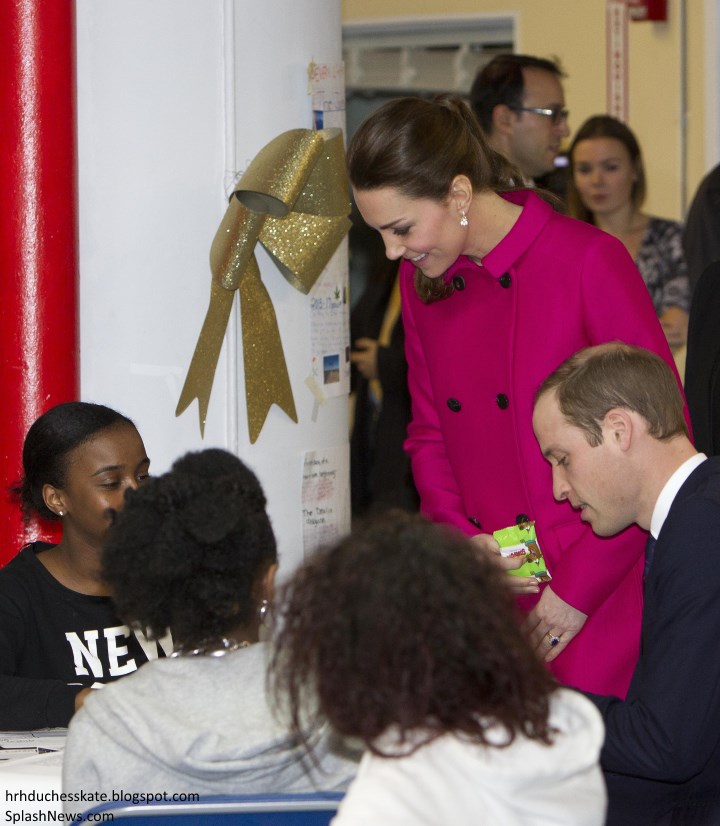 The couple also attended a GREAT reception hosted by NeueHouse. 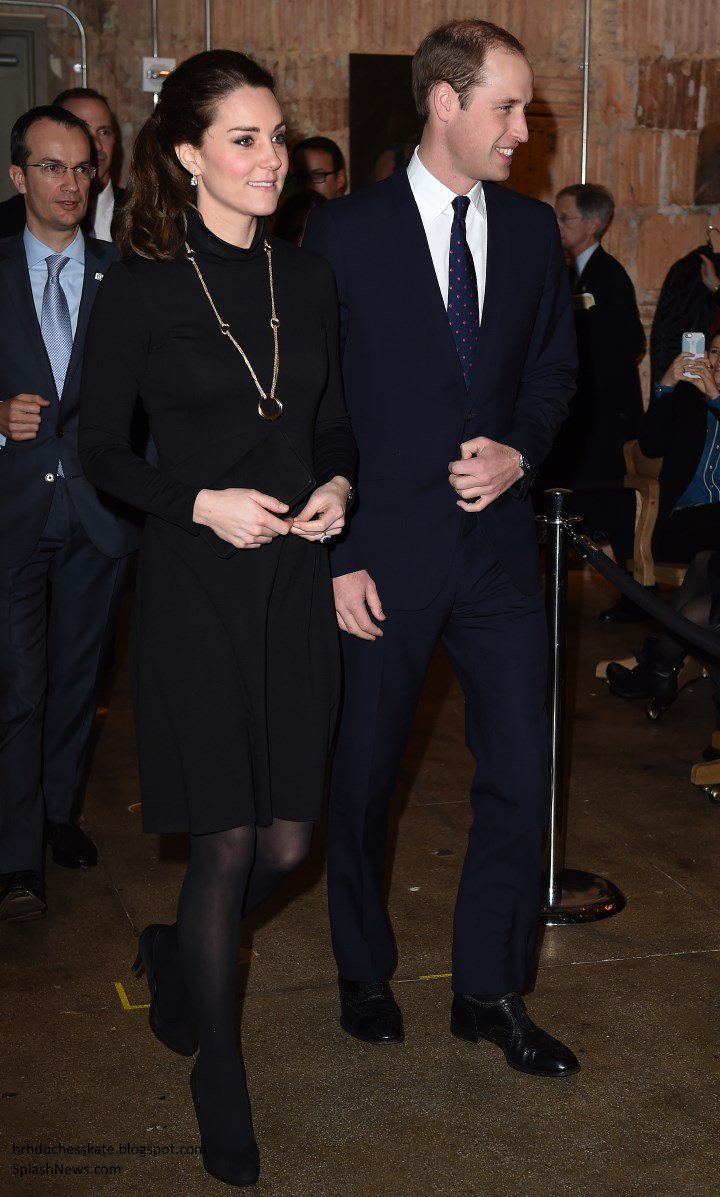 The reception celebrate the wealth of British talent in the creative industries based in New York. 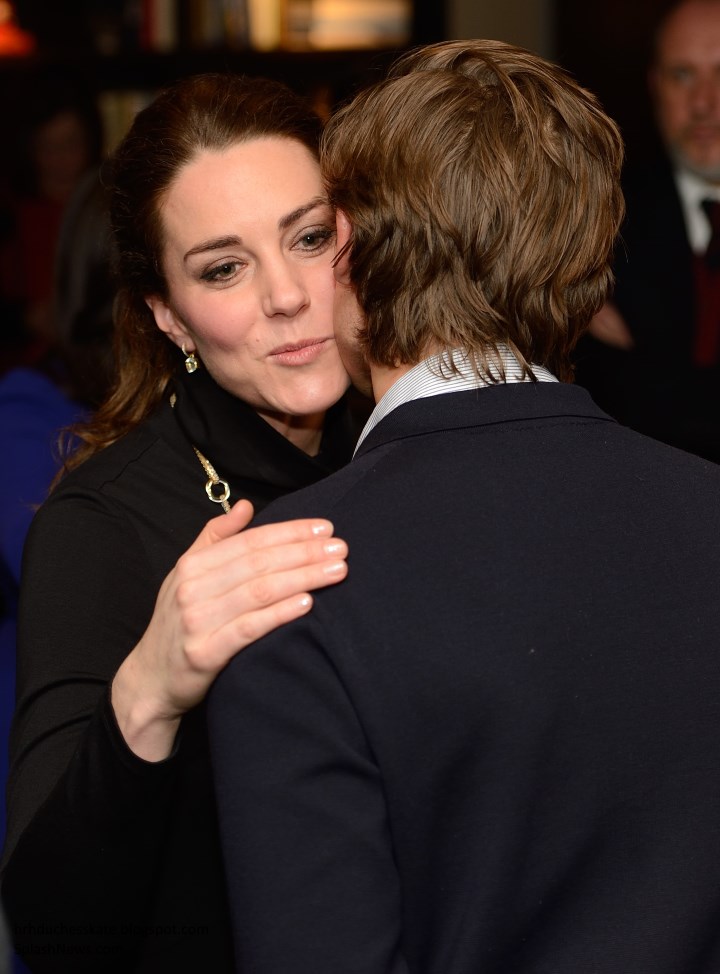 The Duchess with Sir Patrick Stewart. 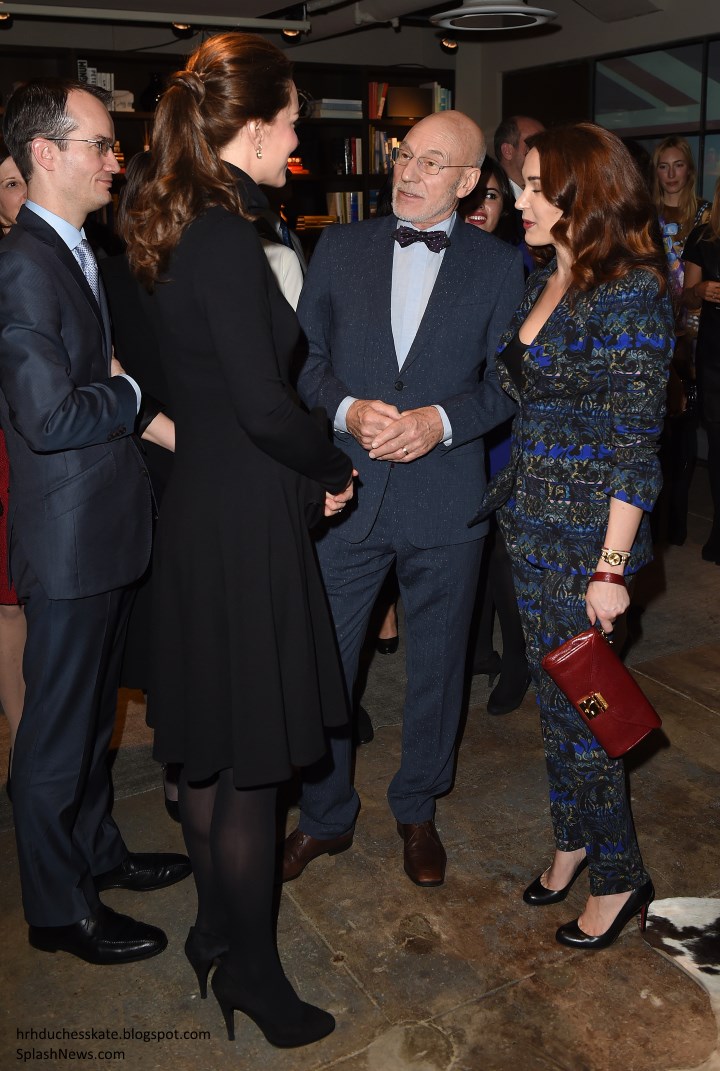 Many of us were eager to find out where Kate's jeans came from last night. Whilst talking to Jenna Lyons, creative director of J Crew the Duchess revealed they were in fact by the US brand (we've updated the original post with details on the jeans). 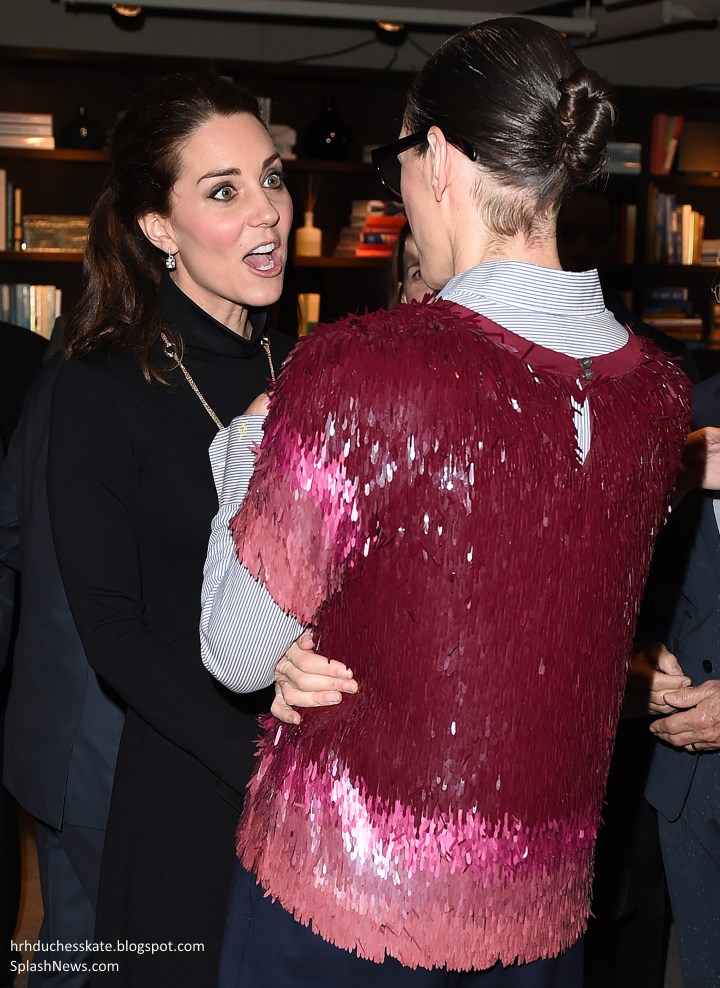 Following two days of dark colours, Kate selected the vibrant cerise double-breasted coat from Mulberry. It is currently reduced from $2,600 to $1,300 on the Mulberry website.

It is described this way:

'A double-breasted coat is a timeless winter style with a reassuringly classic silhouette. Updated in vibrant cerise, this version has beautiful finishing details including elegant horn buttons and contrasting midnight blue lining.'


Kate wore the black Seraphine Vanessa dress. The £59 turtleneck dress is made in luxurious ponte roma.


Another look at the dress on Kate. 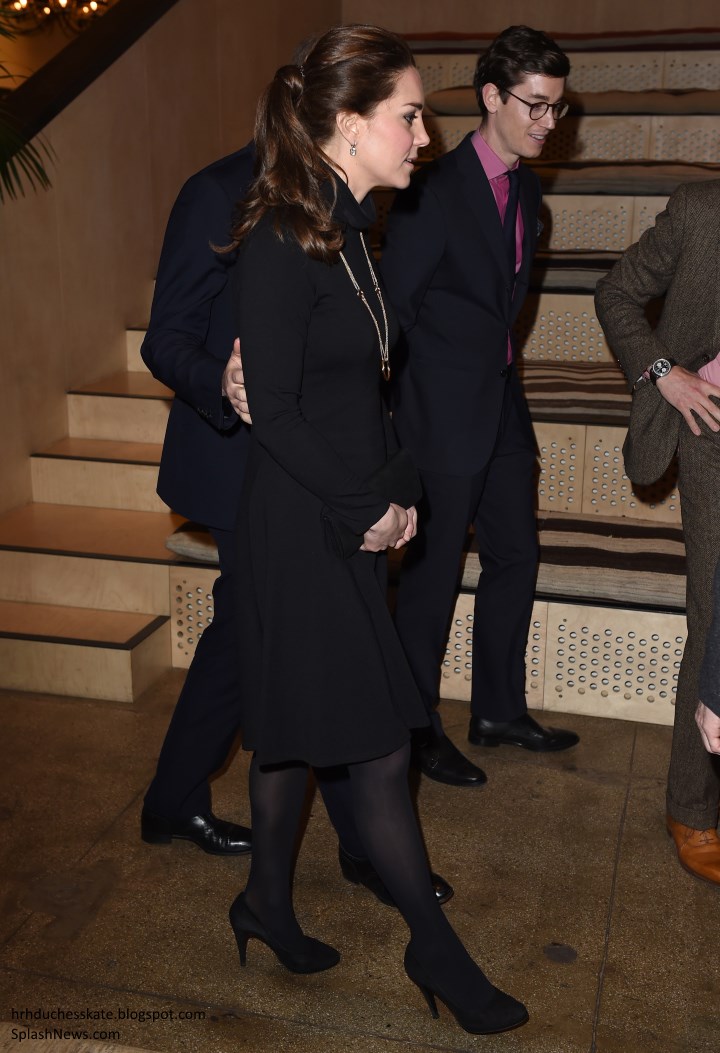 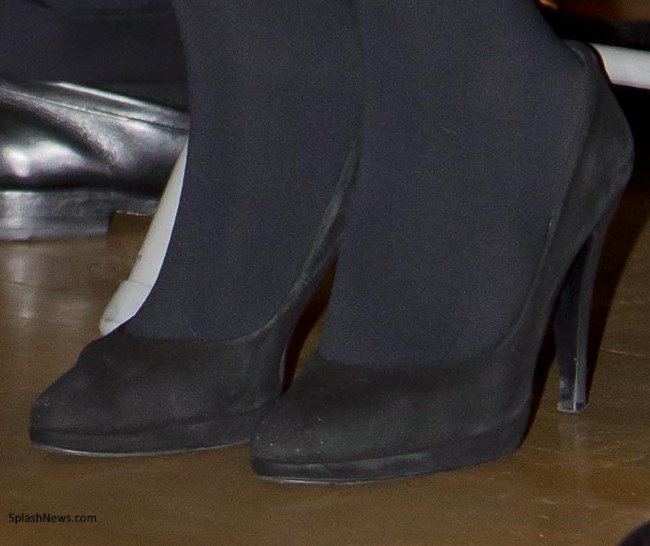 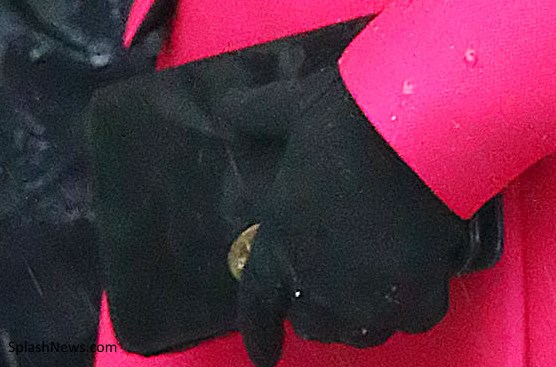 Kate wore her Cartier Trinity Necklace. Readers may recall the Duchess debuted the piece at a 2012 National Portrait Gallery Exhibition. 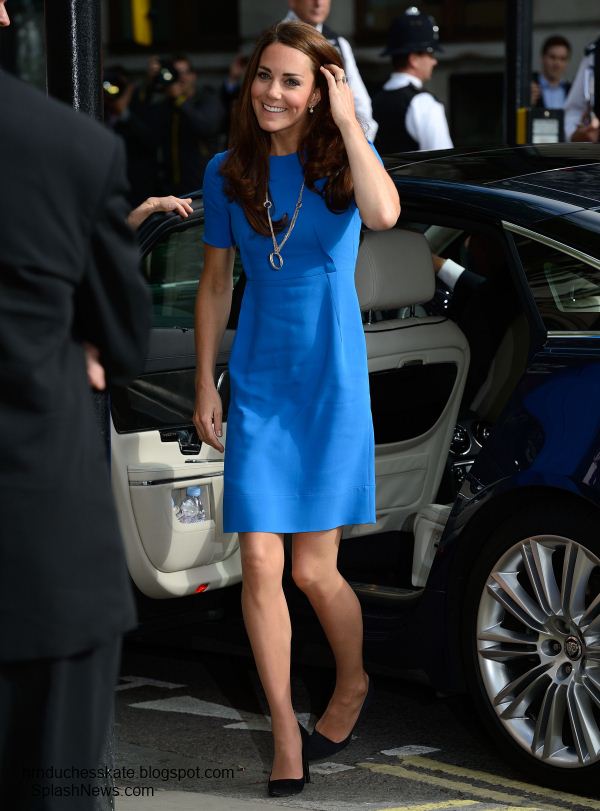 
The Duchess wore her hair up in a ponytail and Kiki McDonough cushion cut green amethyst earrings. 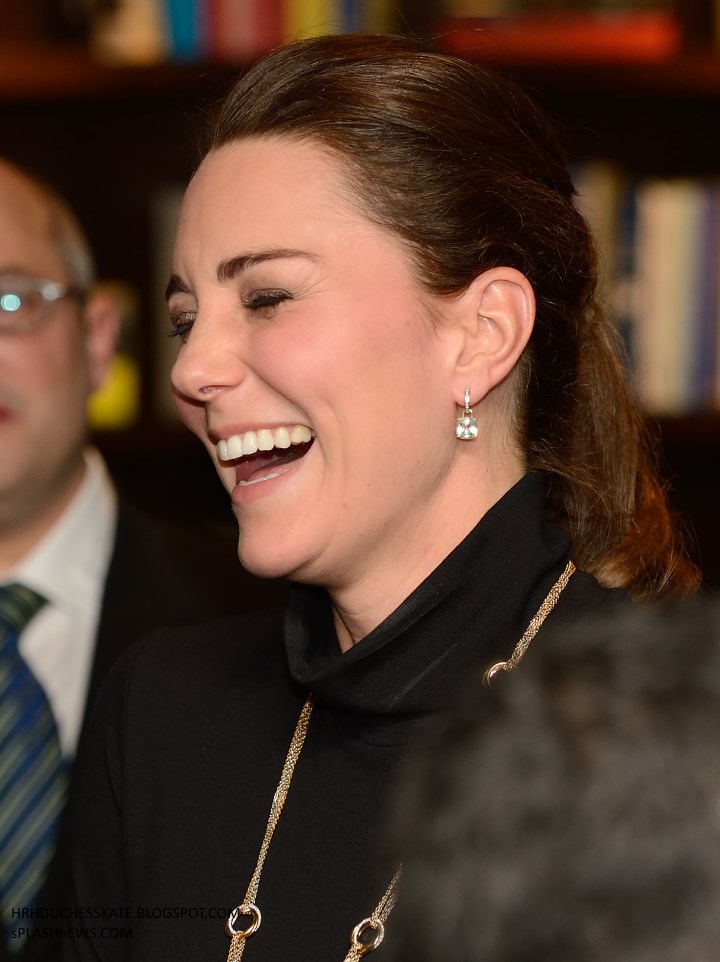 We'll see William and Kate at the St Andrews dinner in a few hours. We expect to see the Duchess in a full length gown.
Posted by Admin at 16:53:00