William and Kate Hold Hands for Christmas Day Service with the Royals and Middletons!

The Duke and Duchess of Cambridge joined the Royal family for the annual Christmas Day service at St Mary Magdalene Church. 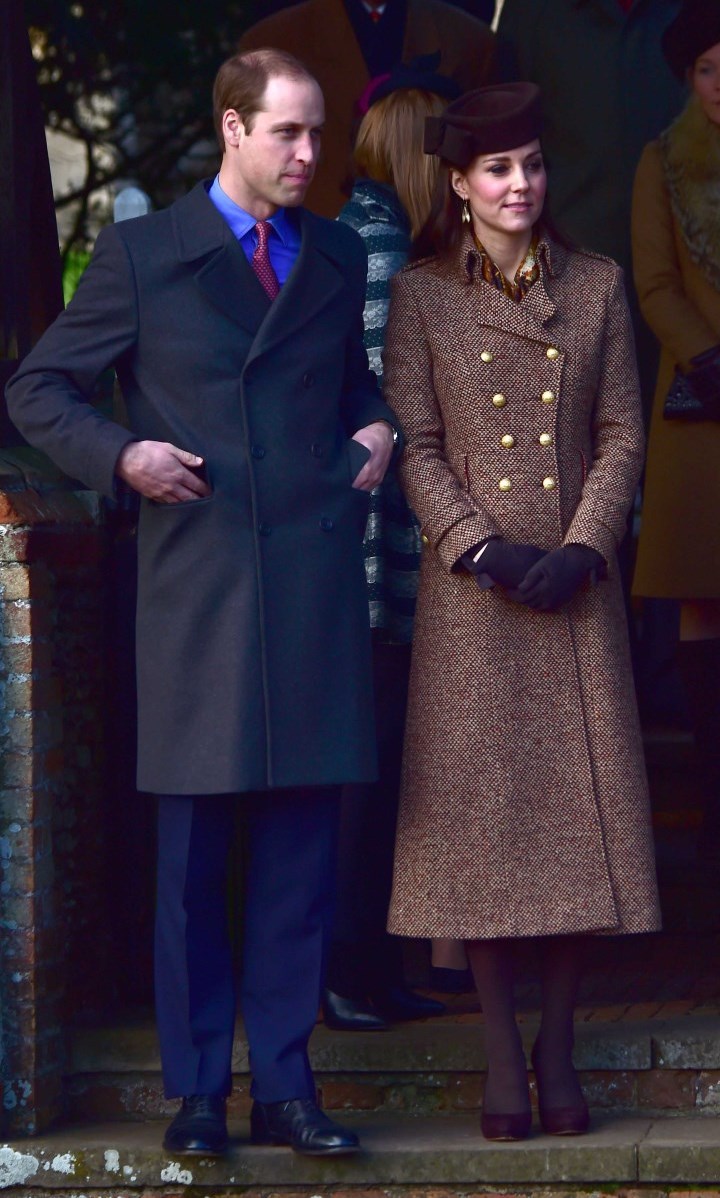 Once again William and Kate held hands as they made the short walk to church,

Every year at Christmas around thirty members of the Royal family arrive at Her Majesty's Norfolk estate, Sandringham, including Prince Charles and the Duchess of Cornwall, Prince Harry, the Princess Royal and her family, the Wessexes and the Yorks. With varying commitments it's the perfect time for the family to catch up and enjoy the festivities together. 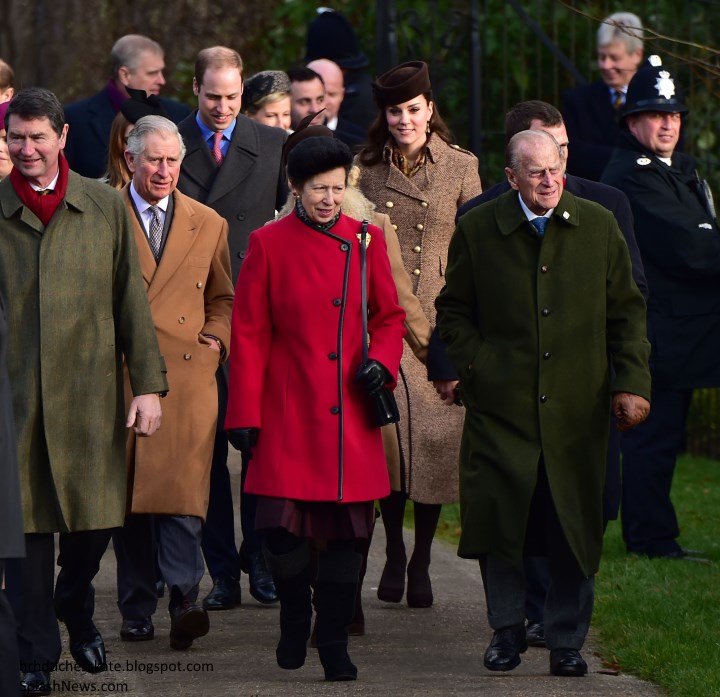 This year, William and Kate are primarily celebrating at their ten-bedroom country mansion Anmer Hall with the Middleton family, who arrived last week to spend as much time as possible with Prince George. 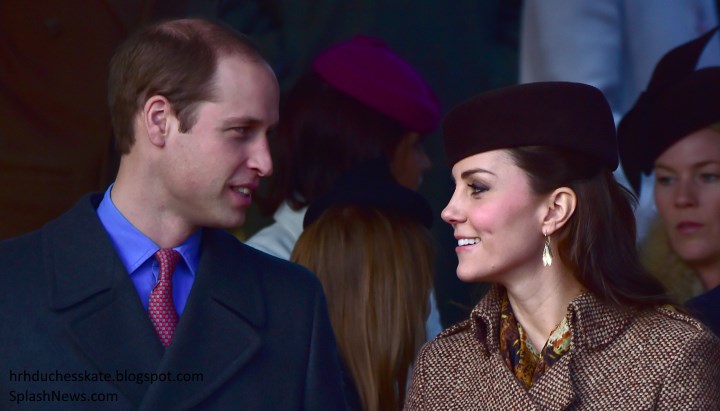 The Middleton family joined the royals for church this morning.

Yesterday, James Middleton participated in a Christmas Eve football match with Prince Harry (Prince William sat out due to a twisted ankle) and it's thought the Middletons may join the Royal family for the annual Boxing Day shoot, too. 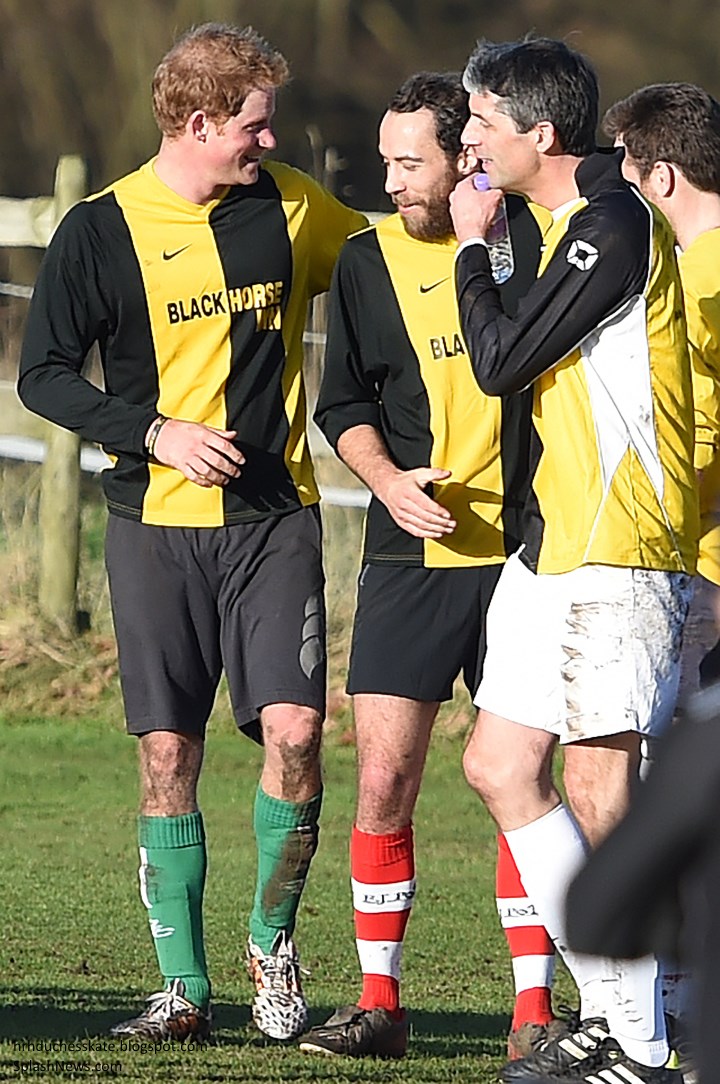 As always, locals from the area assembled to see the royals arriving for the service and like last year were hoping for a glimpse of Prince George. The energetic toddler will join his parents when he's older but for now he's most likely enjoying his gifts from Santa back at Anmer Hall.


The parish church of St Mary Magdalene is one of exceptional historic interest, with memorials to many members and relations of the Royal family from Queen Victoria onwards. It is considered one of the finest carrstone buildings in existence, and dates back in its present form to the 16th century.


The sumptuously decorated chancel with its carved angels frames the silver altar and reredos presented to Queen Alexandra by the American Rodman Wanamaker as a tribute to King Edward VII.  He also presented her with the silver pulpit and a silver 17th-century Spanish processional cross. Other notable features include a Florentine marble font, a Greek 9th-century font and stained glass from the 16th century onwards.


As they made their way from church, they chatted with locals and Kate accepted flowers. 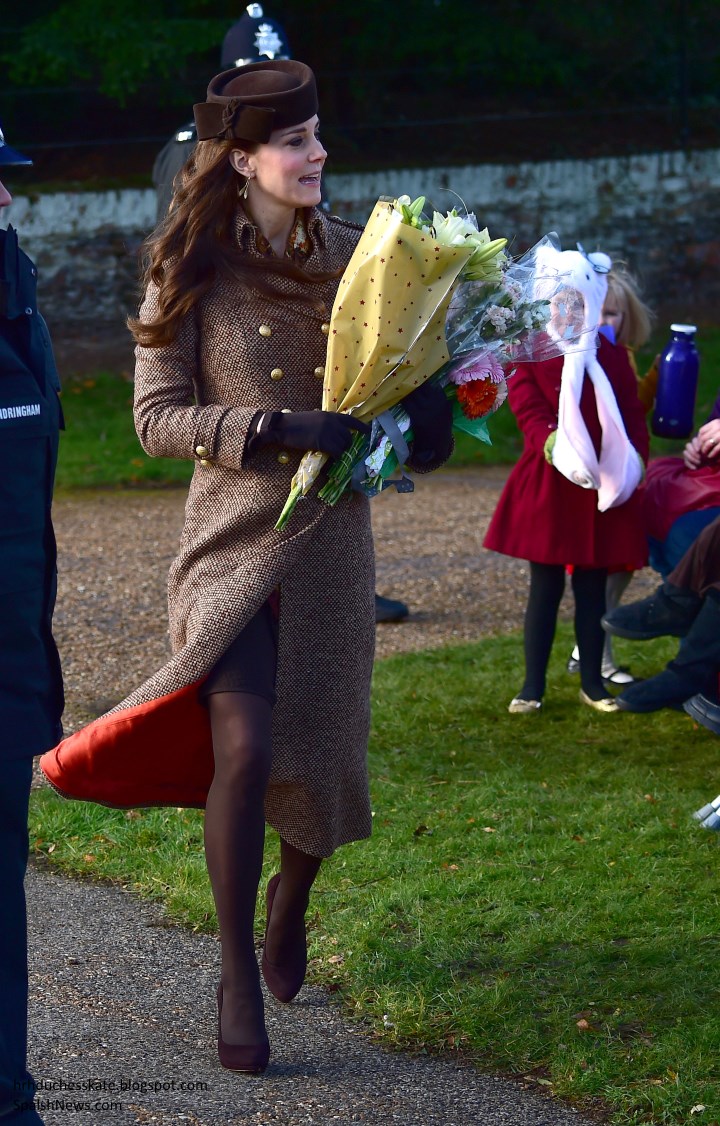 Kate spoke about the little prince "I'm sorry we didn't bring George but you would have heard him in the Church". 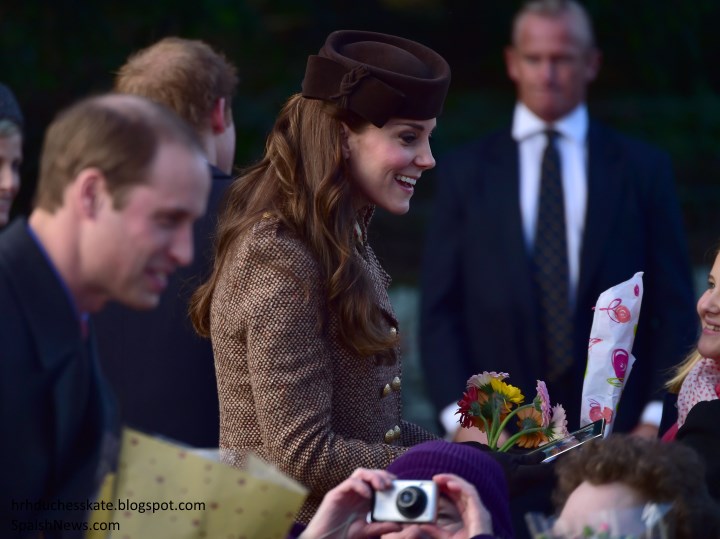 Kate with Prince Charles after the service. 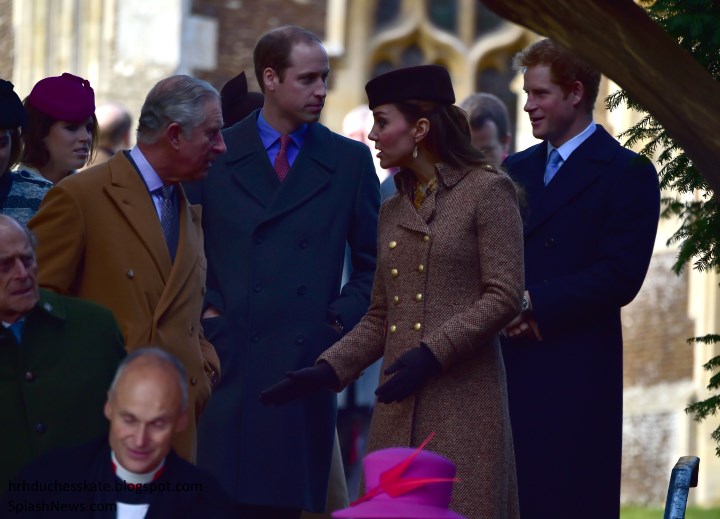 Her Majesty looked regal in pink. You can view The Queen's Christmas speech at YouTube. This years theme is reconciliation and she pays tribute to Ebola volunteers and the poppy display at The Tower of London. 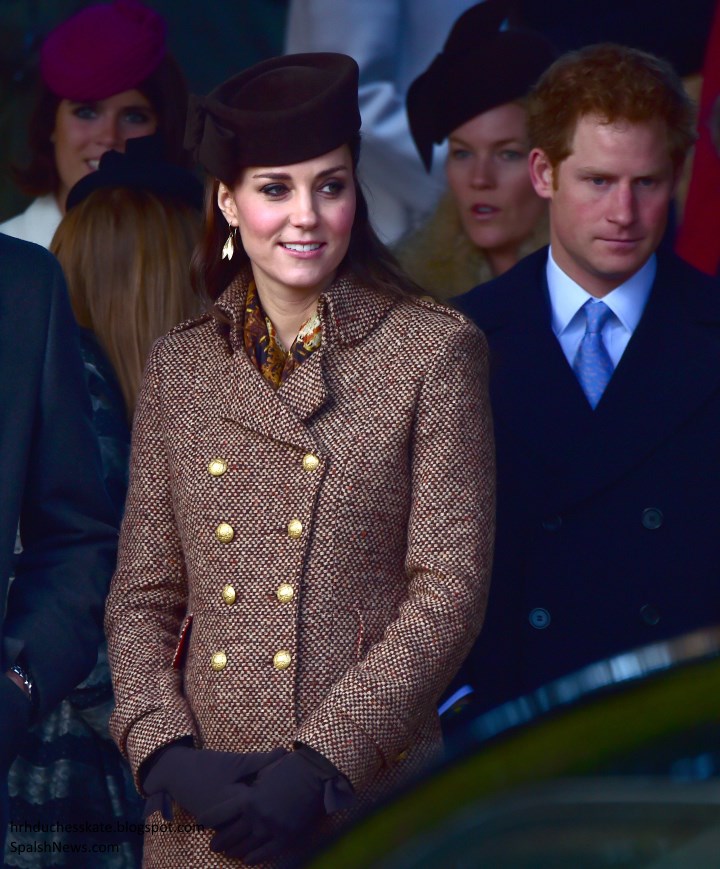 A What Kate Wore reader suggested it is the Moloh Turpin Coat. The £685 eighteenth-century style garment is from the 2013 collection and comes in brown and cream check with flecks of orange. Kate's coat is shorter than the piece shown below but it certainly appears to be the correct one.


It appears the Duchess wore her Hobbs Brown Animal Shirt Dress. The garment is significantly reduced at John Lewis and House of Fraser at the moment. 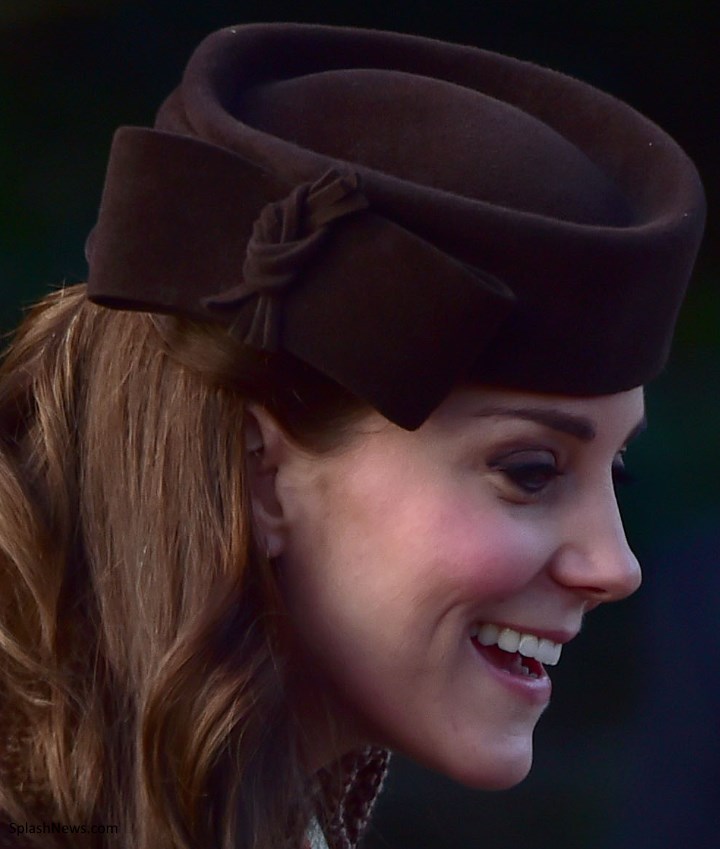 
Kate completed the look with a new silk scarf. 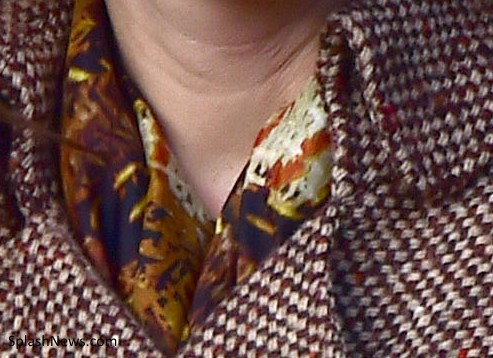 Really Wild Clothing confirmed it is their Silk Scarf in Autumnal Partridge. The £125 piece was designed in-house and inspired by Game birds in warm, Autumnal colours. 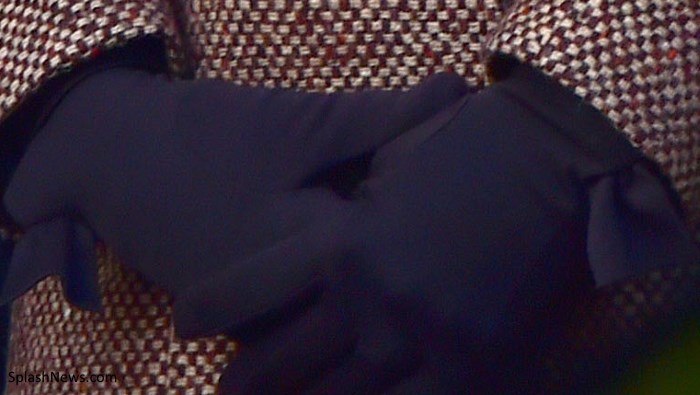 Also today, we recently discussed William and Kate's Christmas card and what photo it would feature. Thanks to our friend Trisha from A Petite Princess we now know they chose one of Prince George's first birthday portraits.


Finally, an interesting snippet of information emerged during the week from the St Andrews University student paper The Saint. As a second year student she was asked why she decided to go to university to which she replied: "To get an overall education in all aspects of life."


I'm off for Christmas lunch with my fiancé and family now and expect William and Kate will be shortly enjoying theirs, too.