The Duke and Duchess of Cambridge had a busy (and fun) evening of engagements in New York wrapping up the penultimate day of their trip to the Big Apple. 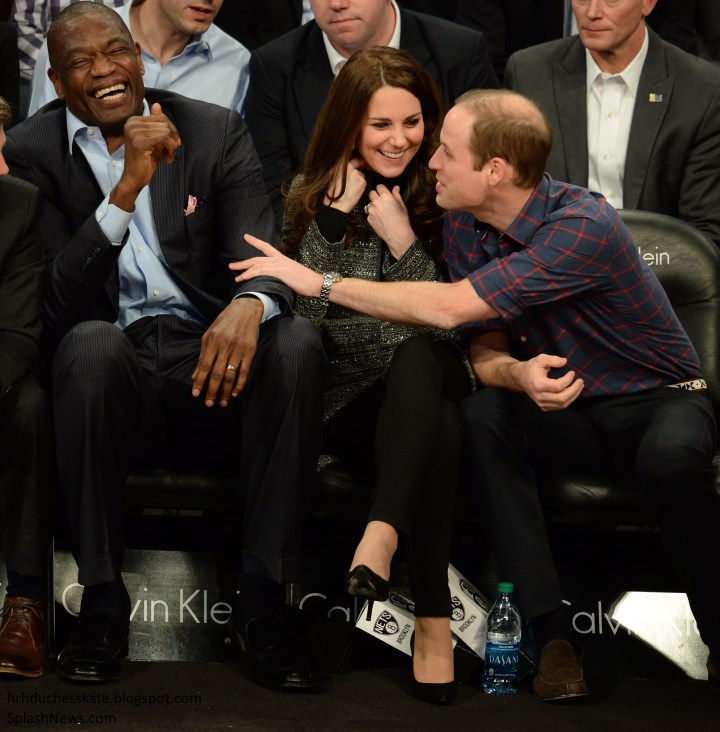 Before we discuss the game, Kate made a surprise appearance at the conservation reception at the British Consul General's residence with Prince William. It had been billed as a solo event for the Prince, however, it was decided earlier today Kate would accompany him and they would travel to the NBA game afterwards. The Duchess, who is five months pregnant is clearly feeling better and eager to participate in as many events as possible during the trip.

Upon their arrival, shortly after 6 pm, they were photographed chatting with Hillary Clinton and her daughter Chelsea - who gave birth to her own daughter Charlotte Clinton Mezvinsky in September - beside a very festive and brightly-lit Christmas tree.

Kate spoke to the former First Lady about her visit to the Northside Development Center earlier today and the benefits of singing to babies. Mrs Clinton told the Duchess, "We're trying to encourage more people to sing...because the research suggests that its beneficial. I often sang to Chelsea when she was younger." Ending on a light note Mrs. Clinton added that when Chelsea became a toddler she would say to her mother, "No sing, no sing". 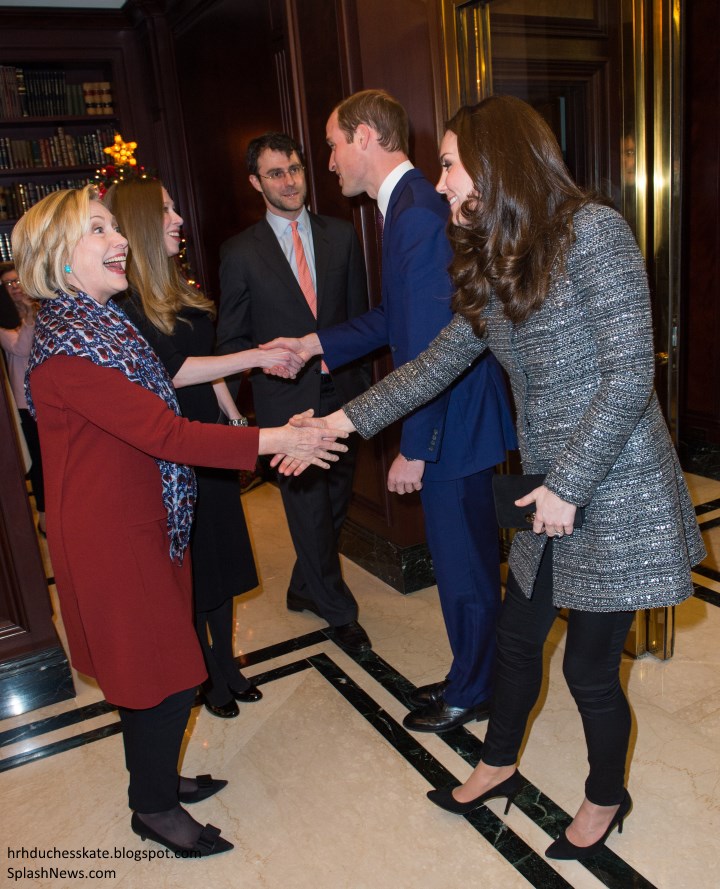 The reception was co-hosted by the Royal Foundation and the Clinton Foundation, in recognition of the work carried out by Tusk Trust and United for Wildlife partners Wildlife Conservation Society, Conservation International and The Nature Conservancy.

The couple chatted to supporters of wildlife charities in a room which was packed with guests hoping to meet the royals.

Kate with a little girl.

"I'm pretty exercised – to put it mildly – about the plight of some of the world's most iconic species. These species are being illegally butchered in the name of trinkets and medicine.

It's easy to blame others for the problem – demand in South East Asia, not enough protection on the ground, and so on. But, if I may say, we could start with looking closer to home. Our own nations still have thriving black markets in these products, and we have to raise the game at home as well as abroad.

But it's not all doom and gloom. You’re the lights at the end of the tunnel. What all of us in this room represent, and tens of thousands of people out there, is solid purpose – a determination not to let our generation be the one that let this catastrophe occur.

Time is running out, but this room reminds us that support is not running out. We can be optimistic."


Before they left, William told guests, "I'm off to shoot some hoops now or whatever it is the Americans call it."

The couple then travelled to Brooklyn where they enjoyed their first NBA game between the Brooklyn Nets and the Cleveland Cavaliers. 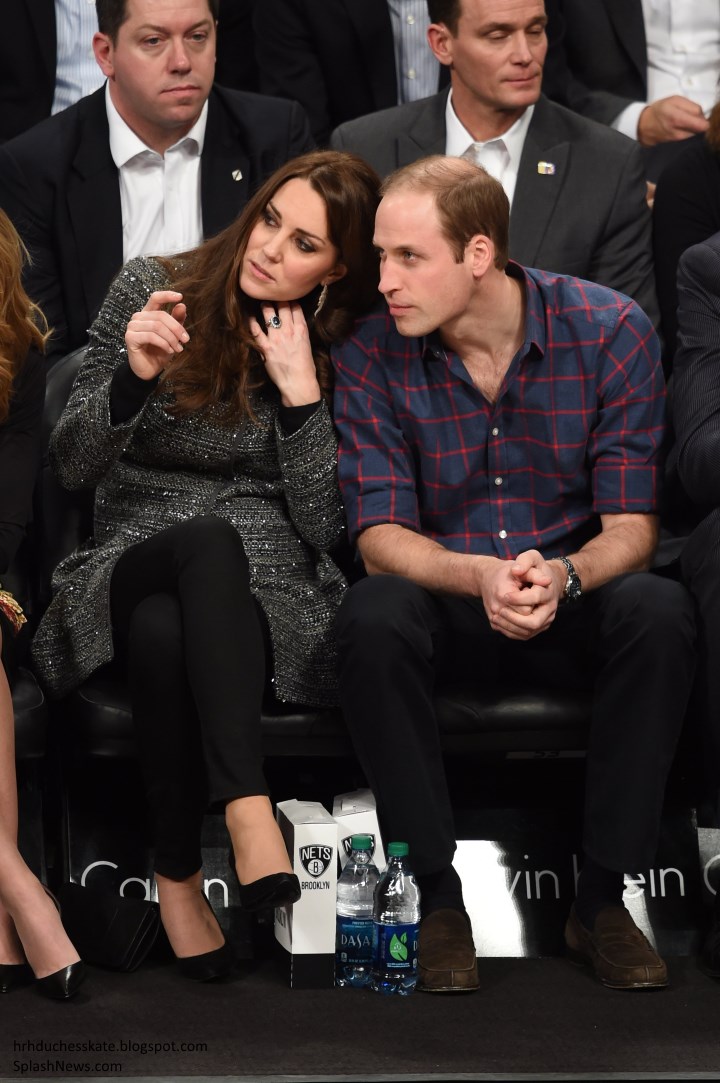 Upon arrival, they posed for photos.


William and Kate with 7'2" NBA legend Dikembe Mutombo. Prince William turned to him and said, "At last someone who is taller than me."


The couple enjoyed dinner at the Barclays Center in support of United for Wildlife before taking in the second half of the match from court-side seats. 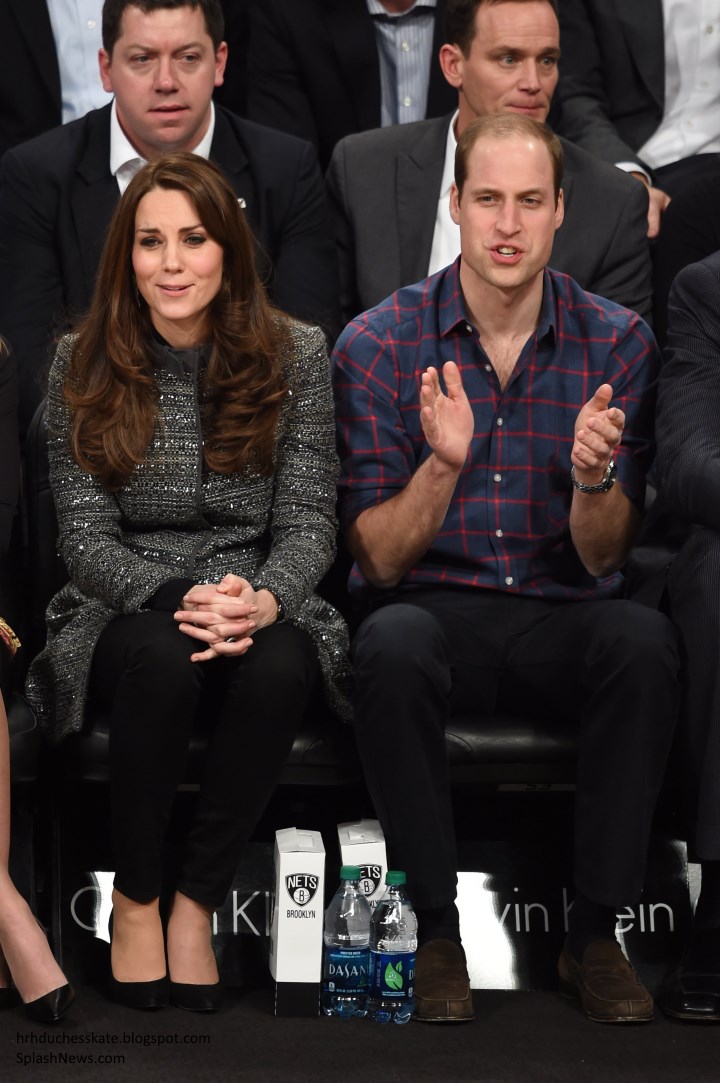 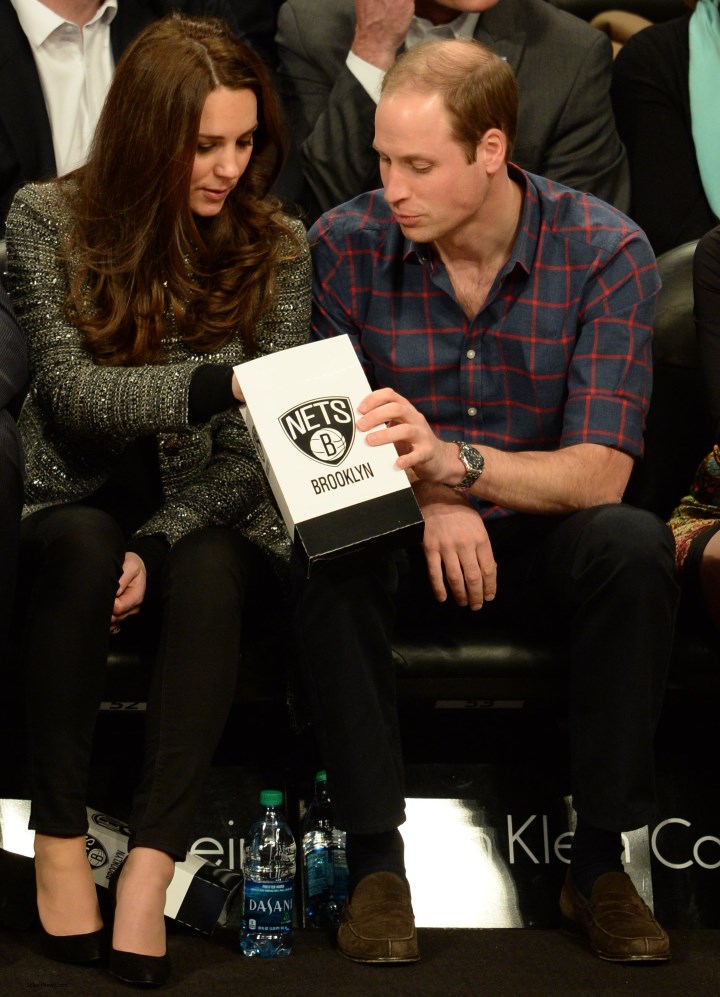 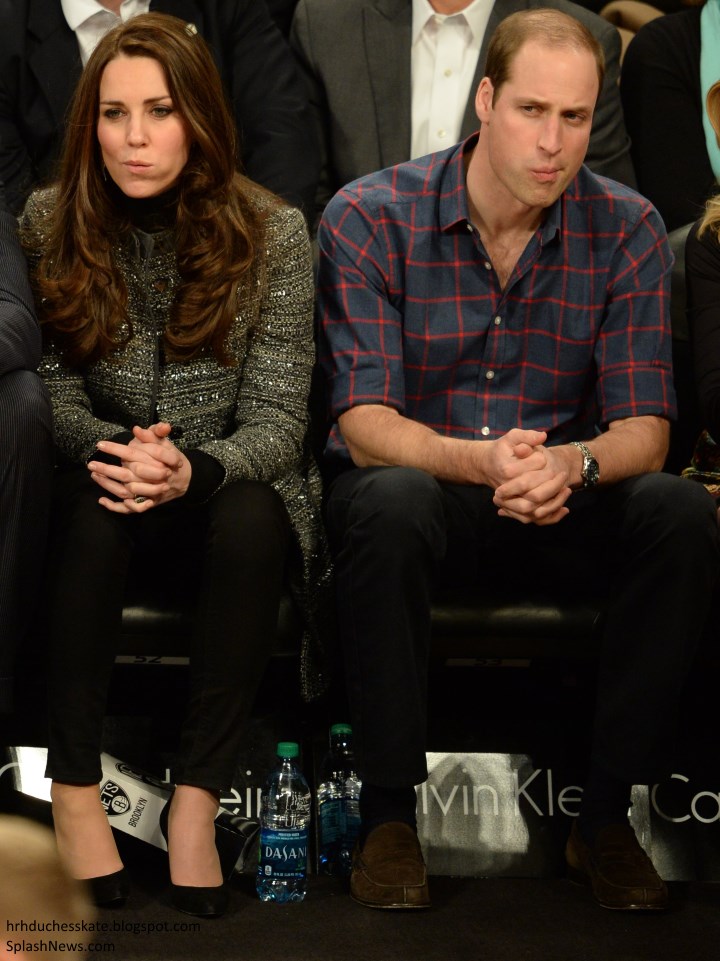 World famous player LeBron James spoke about playing in front of the royals on Sunday saying, "It's a huge honour. The stuff that you read about, people like them are only in books growing up. And to hear that they're coming to town to see me do what I do best, its a huge honour.


A selection of camera shots from the game.


Beyoncé and Jay Z were also present much to the excitement of the media and royal fans. 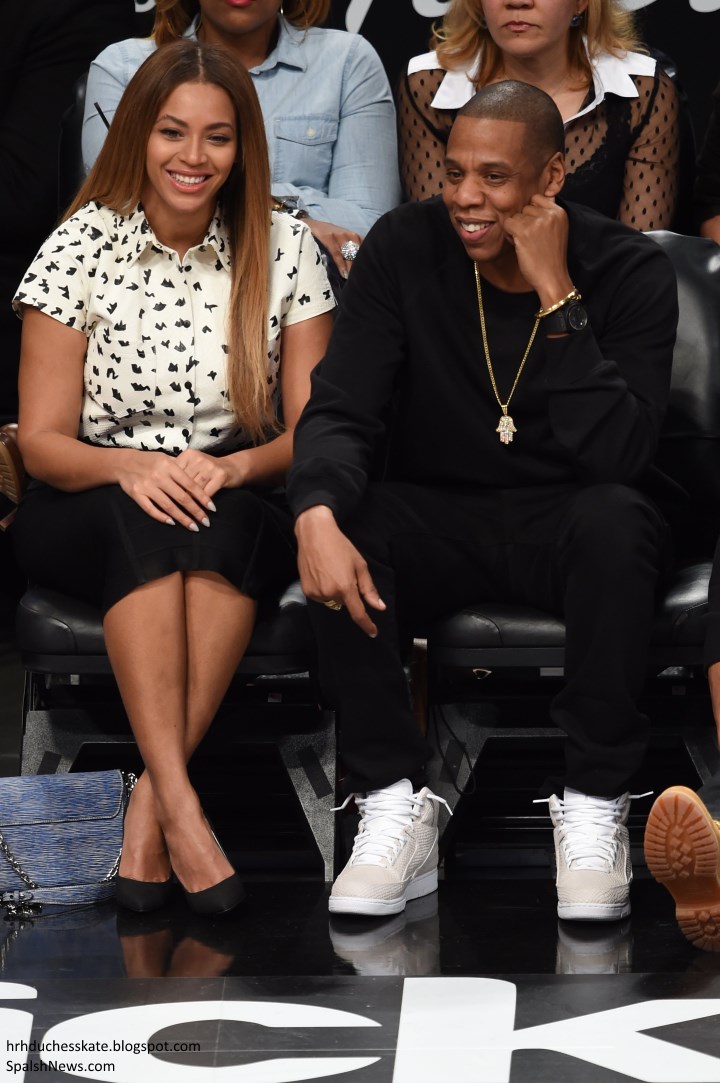 They were seated opposite William and Kate and walked over at the end of the 3rd to meet them as Rule Britannia played. 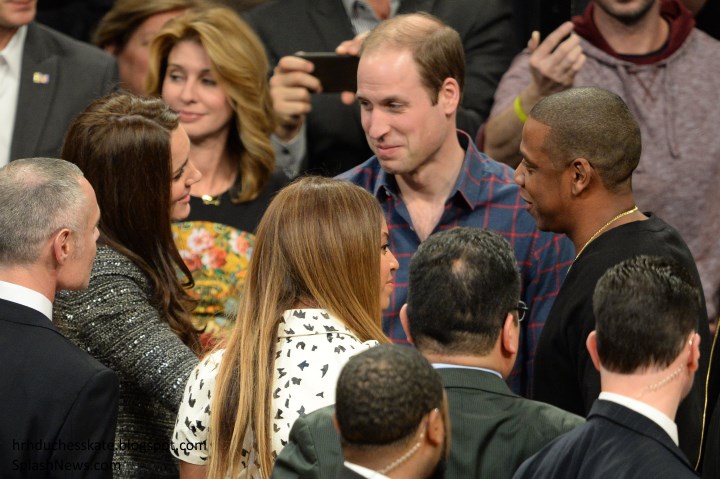 The meeting was arranged before the game.


William and Kate on the JumboTron.


Le Bron James led the Cleveland Cavaliers to a 110-88 over the Brooklyn Nets.


Their attendance is to help launch a collaboration between William's United for Wildlife organisation and three nominated stars of the sport as ambassadors - Dikembe Mutombo, Serge Ibaka and Al Horford. The partnership aims to use the huge global reach of the NBA to help raise awareness among a younger generation of the negative effects of purchasing illegal wildlife trade goods.

After the game they met Lebron James and received jerseys (how cute is Prince George's).


We discussed the strong possibility of seeing Kate wear a piece by a US designer in recent weeks and tonight she did just that, selecting the Tory Burch Bettina Coat. The metallic tweed garment offers a tailored fit and long sleeves. Like her Seraphine coat, it's quite a festive, sparkly piece. It's available for £515 at Tory Burch and in limited sizes at Lane Crawford and Bloomingdales.

'Our Bettina Coat is a textured take on a tailored outerwear style. The material — a cotton blend, woven with bouclé, slubbed and metallic yarns — updates the look of classic tweed with a horizontal-stripe effect and a hint of shine. It has an easy, streamlined cut that is universally flattering and features slit pockets and a row of hidden snaps for a clean finish.' 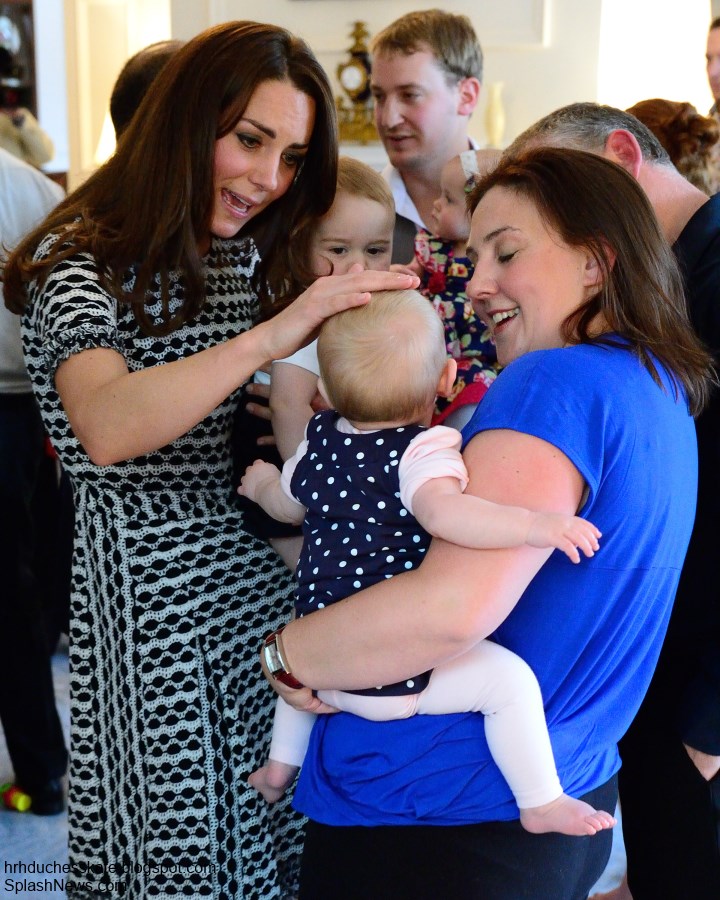 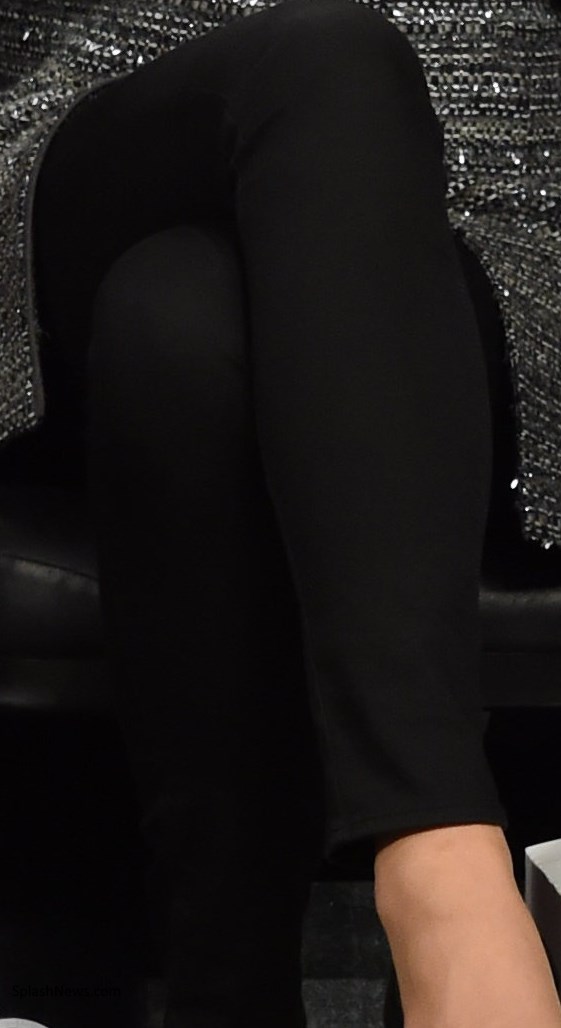 The Toothpick jean in black are currently available in regular and tall reduced from $115 to $105. The toothpick is described as the brands "Skinniest style, lean cropped and a little bit sexy". They are made from a high-tech Turkish cotton with stretch woven into it for a superflattering fit.


There's an excellent discount available for purchases over $100 at J Crew. 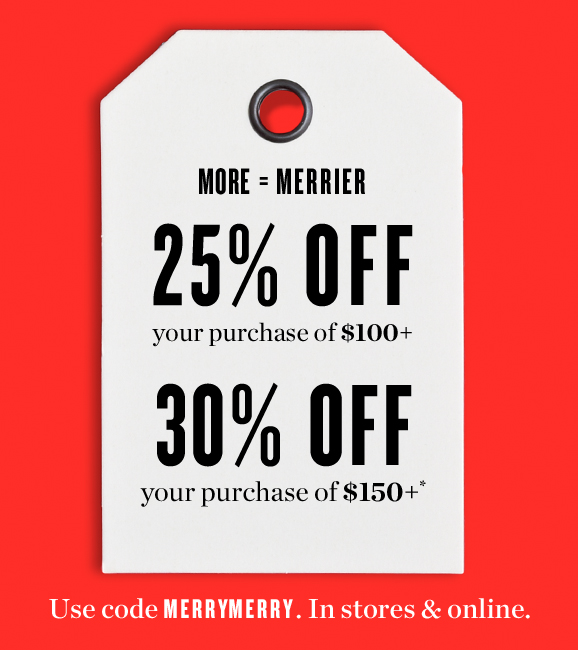 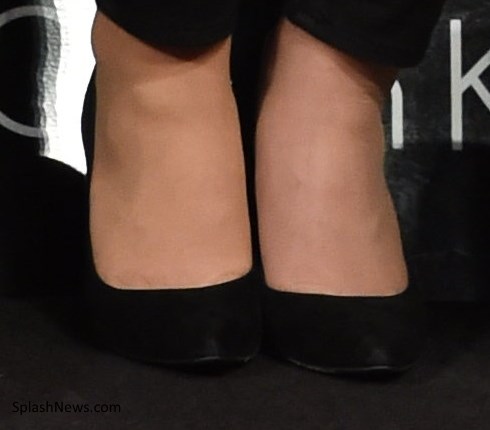 The pumps are currently on sale in a variety of colours at Stuart Weitzman. 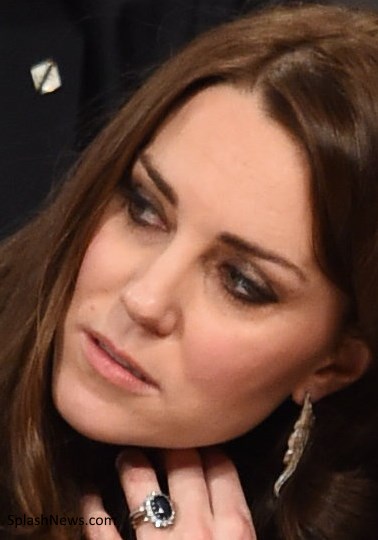 It has been suggested by several readers that Kate may have worn the Patrick Mavros Crocodile Stud Silver Earrings. Mr. Mavros is based in Zimbabwe and actively supports conservation efforts - making him an ideal choice of jeweller for the evening.


Kate also wore a black top underneath her coat and carried her Mulberry clutch.

I think this was a very chic look for Kate and one which carried her from a reception with the Clintons to dinner and an NBA game. It's perhaps my favourite of her New York looks thus far. Do you like it?

You can watch a video from the game at You Tube.

The couple have a full day of engagements tomorrow beginning with a visit to the 9/11 Memorial Museum. We'll see you then.
Posted by Admin at 02:14:00