The Duke and Duchess of Cambridge spent the day in Wales carrying out engagements. 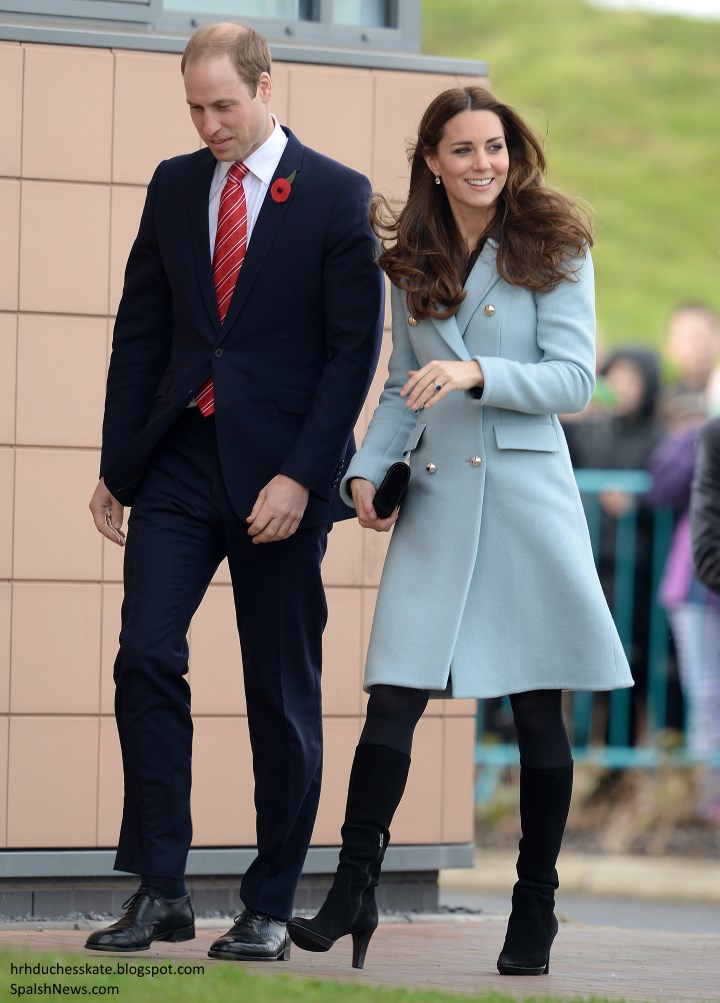 Following, a relaxing break with Prince George on the Queen's Scottish estate, Balmoral, the couple made a welcome return to joint engagements with an away day in Wales. William and Kate shared their first home there, on the beautiful Isle of Anglesey, when William was working as a search and rescue pilot at RAF Valley and they both looked incredibly pleased to return today. 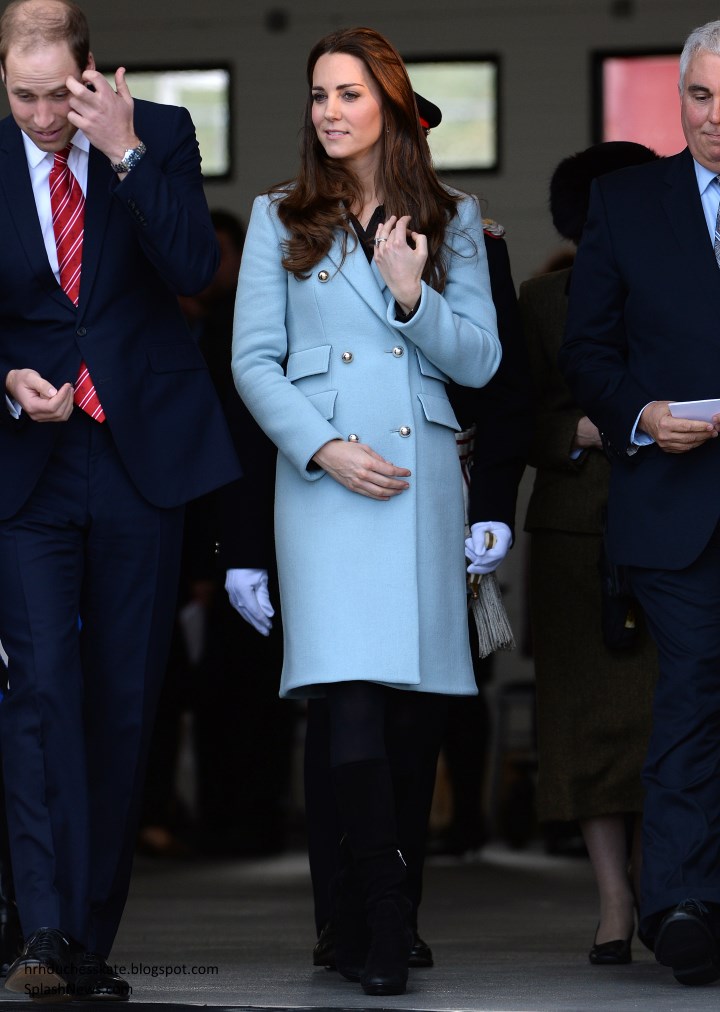 Kate, who is expecting her second baby and currently fifteen weeks pregnant is continuing to recover from Hyperemesis gravidarum and looked very well today. Meanwhile, Prince William has been busy studying for exams in order to obtain the correct licence before he can fly an air ambulance for East Anglian Air Ambulance, however, he has been taking time away from his studies for engagements this week. 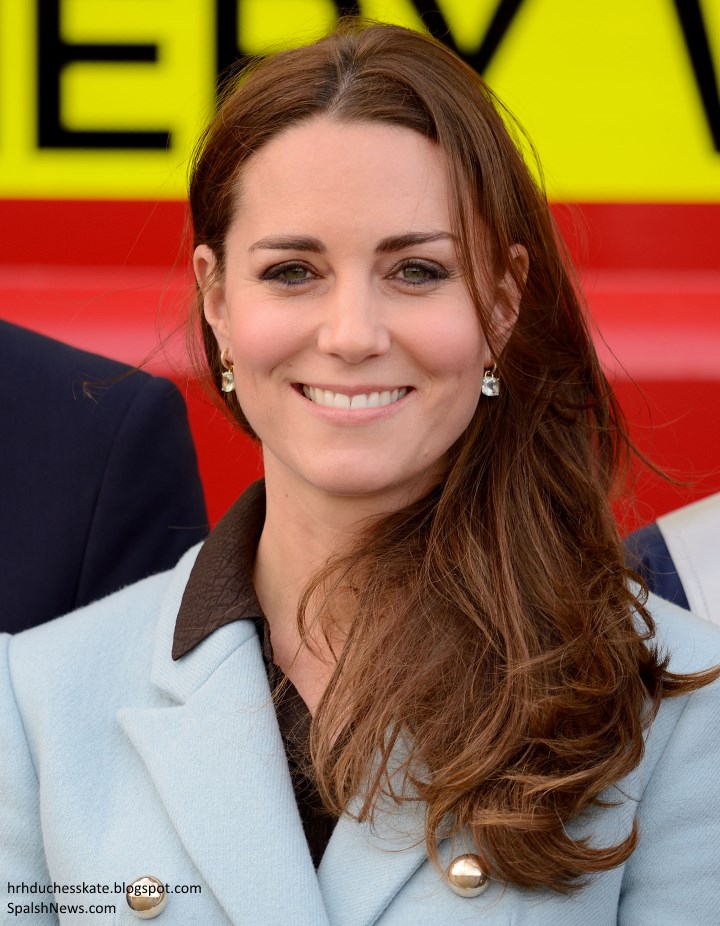 The Cambridges first port of call was a visit to the Valero Pembroke Refinery, an important employer in West Wales, which is celebrating its 50th anniversary this year. 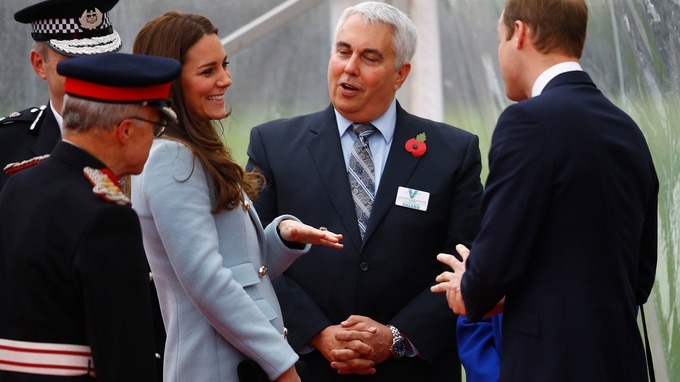 Their Royal Highnesses were greeted by locals. 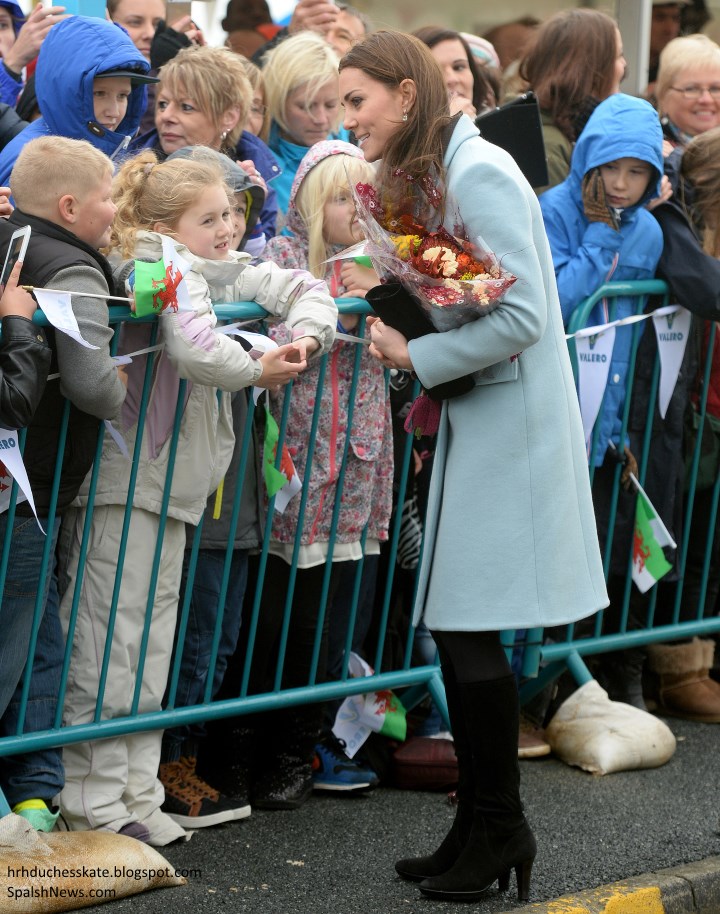 The oil refinery first came on stream in 1964 when it was officially opened by Queen Elizabeth, The Queen Mother.


It became the first major industrial employer in South Pembrokeshire since the closure of the Pembroke Dock in 1926. The 50th anniversary offers an opportunity to highlight the prosperity the refinery has brought to the country, not only through employment but also community engagement.

Honours and achievements include winning the Prince's Trust Cymru Celebrate 2007 "Celebrate Success" award for community projects, and winning the Best Employer Category of the 2009 Modern Apprenticeship Awards for its young apprentice programme. The company also supports many projects in the local area including the arts, sports clubs and Macmillan Cancer Support.

Upon arrival, Their Royal Highnesses viewed a display which chronicles the refinery's fifty-year history and met workers, apprentices, placement students and their mentors. 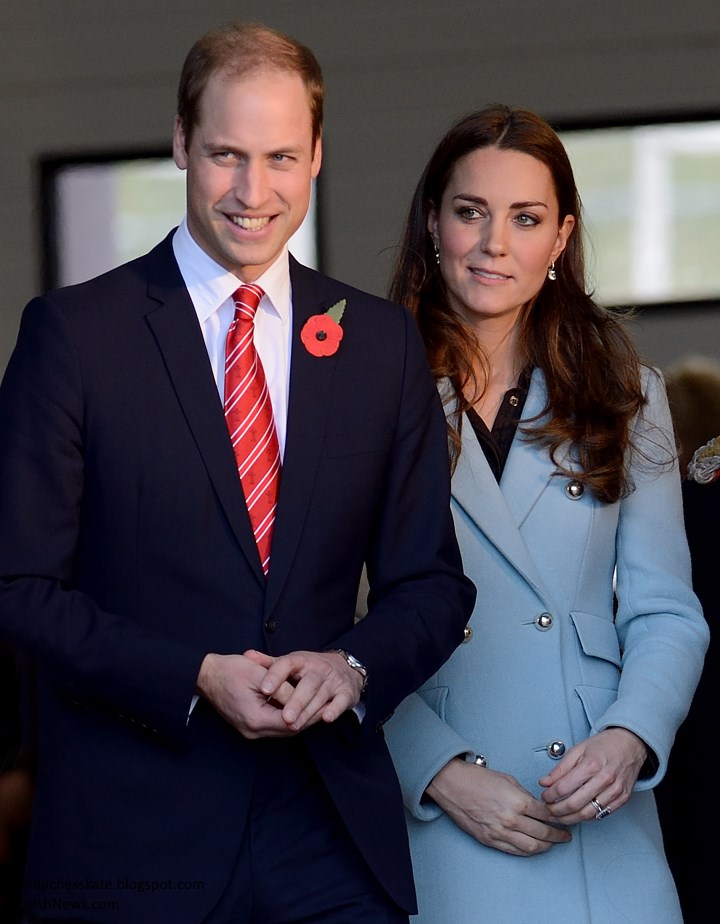 Reporter Mike Griffiths shared a closer look at the display which features the official opening with The Queen Mother.


The Duke and Duchess visited the control room to meet blending and shipping workers.

Afterwards they proceeded to the Fire Hall to meet representatives from community organisations who are supported by the refinery.

The couple were given a new toy for Prince George - a toy delivery lorry.

The visit concluded with a performance by the Young Actors Studio who work in partnership with the refinery through the Royal Welsh College of Music and Drama. William and Kate unveiled a plaque and a painting by a local artist before leaving. 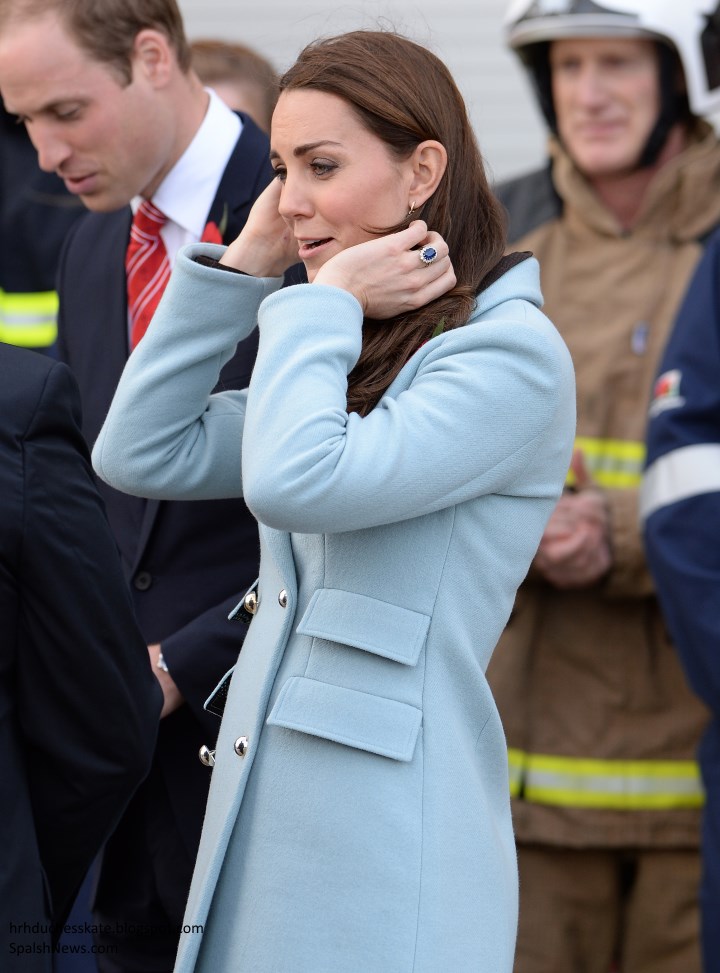 Next, the Cambridges travelled to the Millennium Stadium in Cardiff where they watched the Rugby Union international match between Wales and Australia, which began with a Remembrance tribute. Wales lost 28-33, however it was an eventful and exciting match for fans.

The royals chatted with Roger Lewis of the WRU.

Rugby fan William is Vice Patron of Welsh Rugby Union and patron of the Welsh Rugby Charitable Trust. During half-time he privately met injured servicemen in the President's Box and after the match he greeted injured former players and their families at a reception. Kate did not attend the reception.


The Opal Blue Wool Coat is one of the most elegant pieces from the designer's  Fall 2014 Collection. The crisply tailored garment has four pockets carefully placed to flatter and emphasize the waist. It retails for £1,195 at Net-A-Porter and it's also available at Flannels.

'The opening look of the catwalk collection captured the woman of the season - empowered and composed yet playful and exuberant. It is a fun, optimistic approach to the winter coat.'


The baby blue coat on a model.


Kate wore a poppy on her lapel and a dark brown dress underneath. 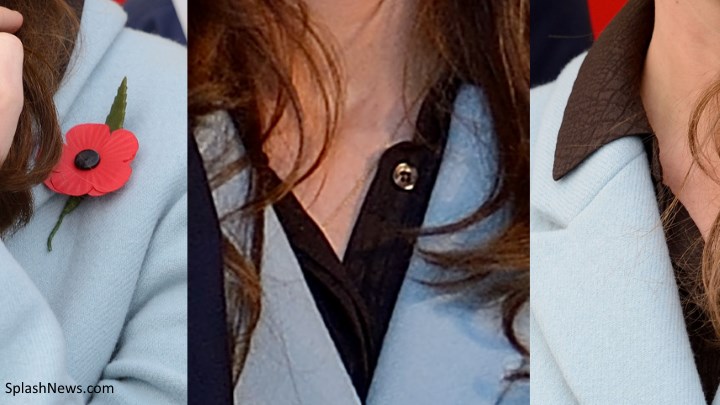 Super sleuths Kate J (from WKW FB Page) and Anna managed to identify the piece as the Hobbs Animal Shirt Dress. The classic shirt dress has been updated with this animal-print embossed silk jacquard. It's reduced from£169 to £118 at Hobbs, John Lewis and House of Fraser.


The Duchess wore her trusty Aquatalia Rhumba Boots. The stylish black suede boots are available in a variety of colours at Nordstrom.


Kate's gloves are by Cornelia James.

And the Duchess carried her Stuart Weitzman Muse Clutch. 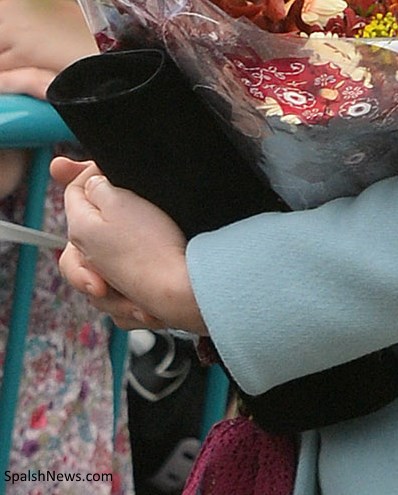 It was an excellent look for the Duchess. Fashionable, appropriate for the weather and the event and most importantly Kate looked very comfortable in it. Kate has a fantastic collection of coats and the baby blue Matthew Williamson is one of her finest yet. I'm not sure teaming it with a brown dress was the best choice though, another colour may have worked better. What do you think? 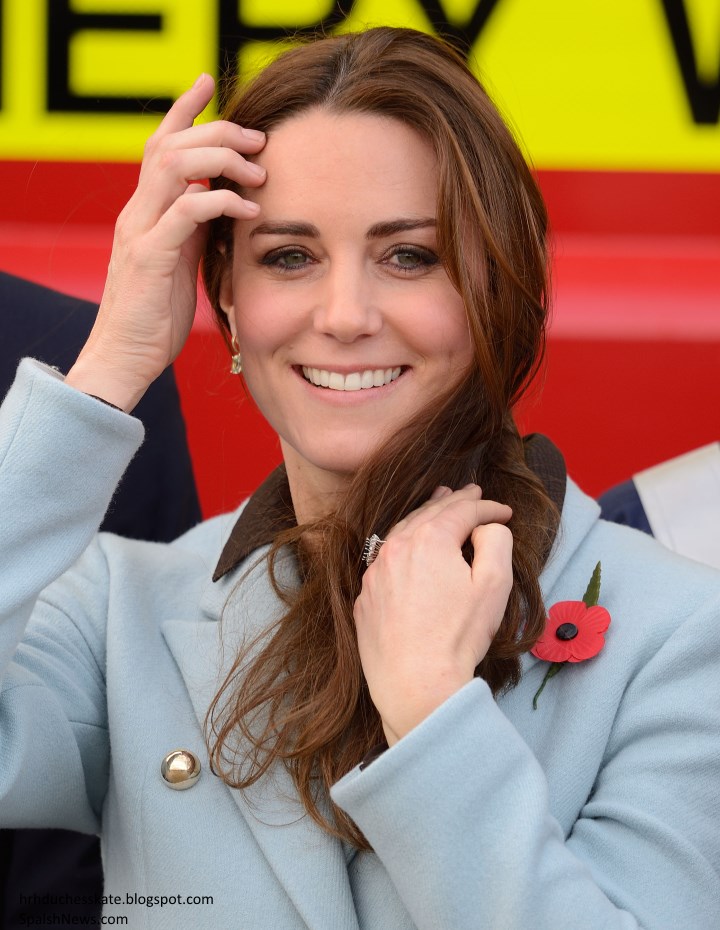 There's a short video from the visit on YouTube.

We have others updates to share with you all today. Two more engagements have been added to Kate's calendar for November (it's really filling up, which is excellent to see). On Thursday, 13 November, William and Kate will attend the annual Royal Variety Performance at the London Palladium.

It's very much an annual royal event - a tradition that began in 1912. In recent years either the Queen or Charles and Camilla have attended, but this year the Cambridges are stepping in. It's a further sign of Her Majesty's confidence in the couple, and will quite likely become a biennial event for them. Performers on the night include Ellie Goulding, Ed Sheeran, Bette Midler and Dame Shirley Bassey. It's a glamorous event (in previous times a tiara would be worn) and we can expect to see Kate in a dazzling evening gown.

For those enquiring about the biannual meeting of the Royal Charities Forum which took place at Buckingham Palace, no photos have emerged, however, according to The Court Circular, William and Harry attended but Kate did not.

Kate was spotted out and about yesterday - enjoying a spot of retail therapy at Peter Jones / John Lewis in the kitchen department. Super sleuth Ashley discovered she was wearing her Temperley London Odele Coat, a red knee-length patterned dress, knee-high boots, most likely her Aqautalia Rhumba and wore her hair up. Speaking of John Lewis, the department store's Christmas Advert is sure to put you in the festive spirit.

We'll see Kate tomorrow for Remembrance Sunday. The observance begins with two minutes silence at 11 a.m.
Posted by Admin at 14:25:00