As Prince William's girlfriend, the then Kate Middleton became one of the most talked about and photographed women in the world. Paparazzi intrusion into her life reached fever pitch when she shared a flat with her sister Pippa in the heart of Chelsea, owned by their parents Mike and Carole Middleton. Determined paps would wait outside to photograph Kate leaving for work in the morning (she briefly worked as an accessories buyer for Junior Jigsaw), on family nights out, running errands, or when socialising with William the media interest was immensely intense. 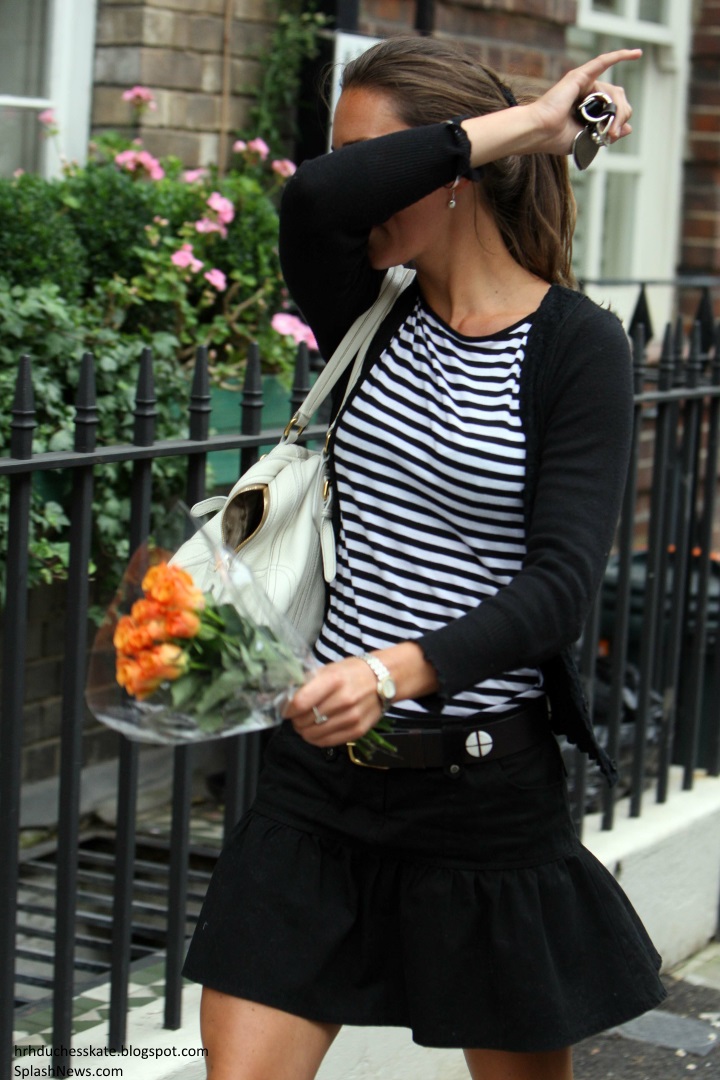 The scene in Sloane Square in 2007 as Kate left Kitts nightclub with friends. 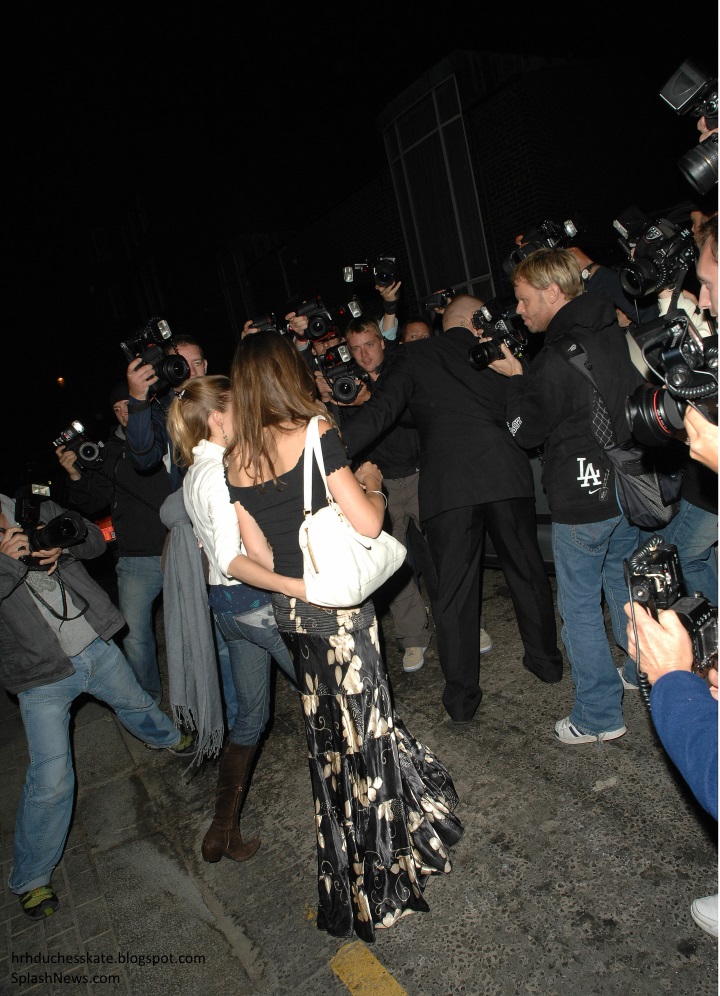 Following the announcement of William and Kate's engagement in November 2010, Kate's life would change in more ways than one. Never again would the future queen browse through her favourite shops, go supermarket shopping or enjoy one of her much-loved outdoor pursuits alone again. As members of the Royal family are considered potential terrorist targets, a team of protection officers from the Metropolitan Police were hand picked to watch over Kate 24 hours a day.

Royal protection is handled by the Royal Protection Command which provides protection to members of the Royal family both at home and abroad. The branch has responsibility for guarding royal residences as well as providing 24-hour uniformed guarding of certain buildings. The branch also offers protection for foreign royals visiting the United Kingdom.

The Royal Protection Command as we know it today was formed in 1983, but its role in protecting the monarch stretches back more than 150 years when officers had their work cut out for them protecting Queen Victoria - she survived five assassination attempts during her reign. During one incident, a would-be-assassin fired a gun at her as her carriage drove past St. James's Park, before he was overpowered by PC William Trounce.

More recently, Princess Anne's former protection officer, James Beaton, received the George Cross for his actions in protecting the Princess during an attempted kidnap in 1974. A man, Ian Ball, driving a Ford Escort forced the Princess's car to stop on Pall Mall before opening fire on, and injuring, Mr. Beaton who exited the limousine in order to shield the Princess. Mr. Ball approached the car and told Anne of his kidnapping plans, which were to hold her for ransom, before directing her to exit the car to which she replied, "Not bloody likely". (There's an interview with Princess Anne where she discusses the incident here.)

Below we see the Queen and Princess Anne with Mr. Beaton and others who helped to foil the attempt.

The above examples show the role of a royal protection officer brings unexpected situations and dangers meaning they have to be completely aware of individuals in the surrounding area of their principal ensuring they are safe at all times.

'As a PPO, you travel with your principal wherever he or she goes. You are assigned an individual, and you often get to know them very well. But we operate in a range of circumstances and we have to be very flexible. For example, we are there to protect members of the Royal family whether they are carrying out official duties or going on private holidays.'


When it came to selecting officers for Kate, two females were chosen to be part of the team (as far as we know there are still very few female protection officers; there were just three in total at the time of the engagement). This may have been done for a variety of reasons: to ease Kate into being accompanied constantly, and to blend in easier, to name two. The first officer we'll look at is Karen Llewellyn. 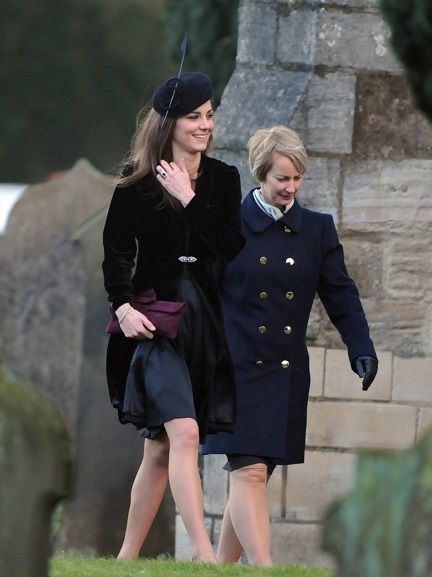 Karen is a petite blonde lady in her late forties who, when photographed with Kate, could easily be mistaken for a friend or a relative. However, she is highly skilled in martial arts and escape tactics and previously protected the King of Norway when he visited Britain and Princess Beatrice during her university days. 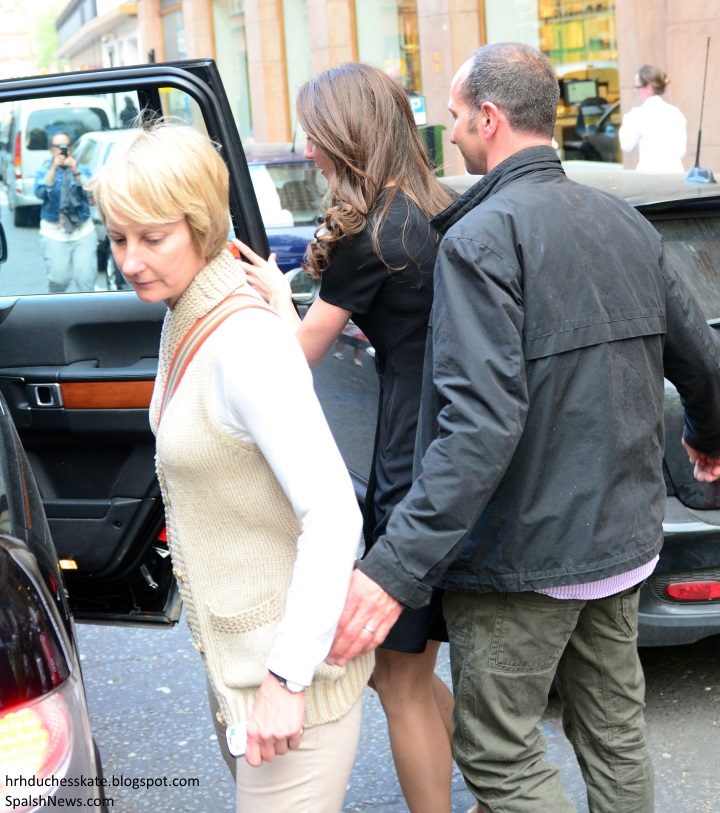 'When a principal is out and about, as a PPO, you are always thinking about the next stage. Is your principal moving on? When? Where is the car? Are there paparazzi around? What is the the threat, what is the risk? So it is never boring. You are always doing recces, thinking tactically and planning.'


Kate's other female protection officer, and perhaps the best known to readers, is Emma Probert. 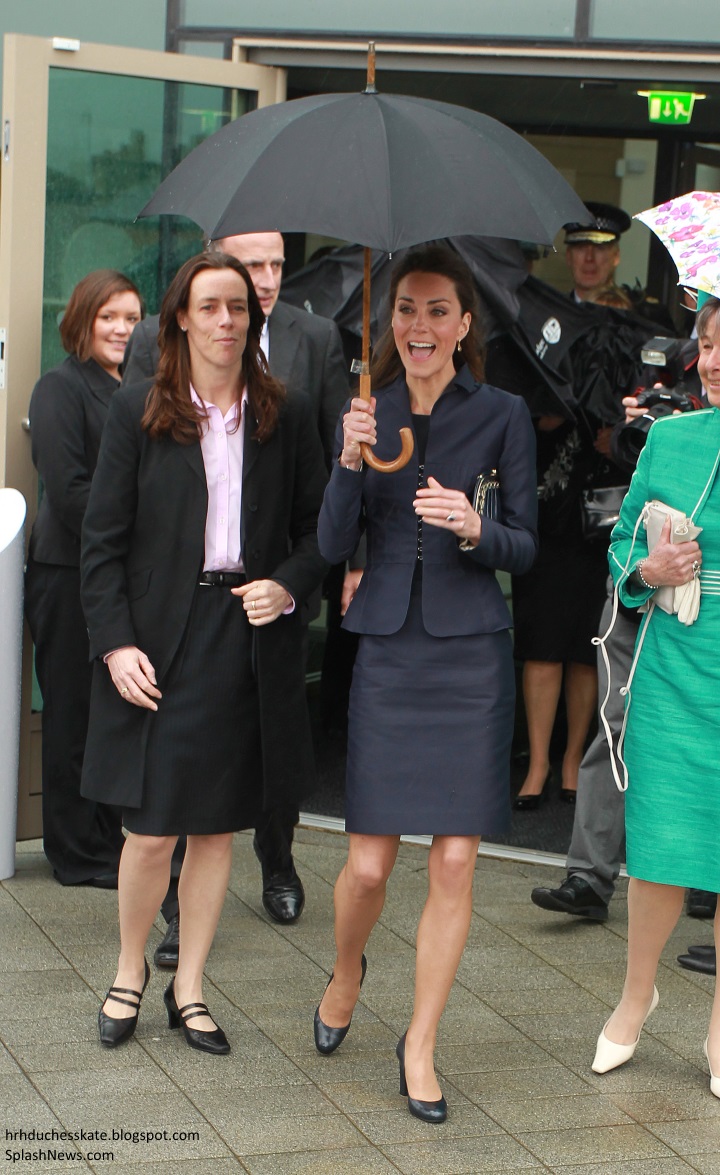 Emma has been photographed with Kate numerous times, perhaps most notably when she sat in the front seat of the Rolls Royce which drove Kate and Michael Middleton from the Goring Hotel to Westminster Abbey for the royal wedding.

The sergeant, in her early forties, has suffered great personal tragedy and joy in her time protecting the royals. In 2009, her policeman husband died in a skiing accident while on holiday in the French Alps with his wife. Emma found love again with fellow royal protection officer Colin Childs and in 2012 she informed Kate she was expecting a baby. The Duchess was said to be "absolutely delighted" and joked "you beat me to it".


Like Karen, Emma previously protected Princesses Beatrice and Eugenie, who were said to be very disappointed to lose her. It is believed Kate and Emma have forged a great bond over the past three years and have got to know each other really well. Today, Ms. Probert is regularly photographed accompanying Nanny Maria Teresa and Prince George on their walks around Kensington Palace.

Among others, this man has also been protecting Kate since 2011.

He accompanied Kate and George to watch Prince William play polo on Father's Day. As you can see he's keeping a close eye on the photographers. 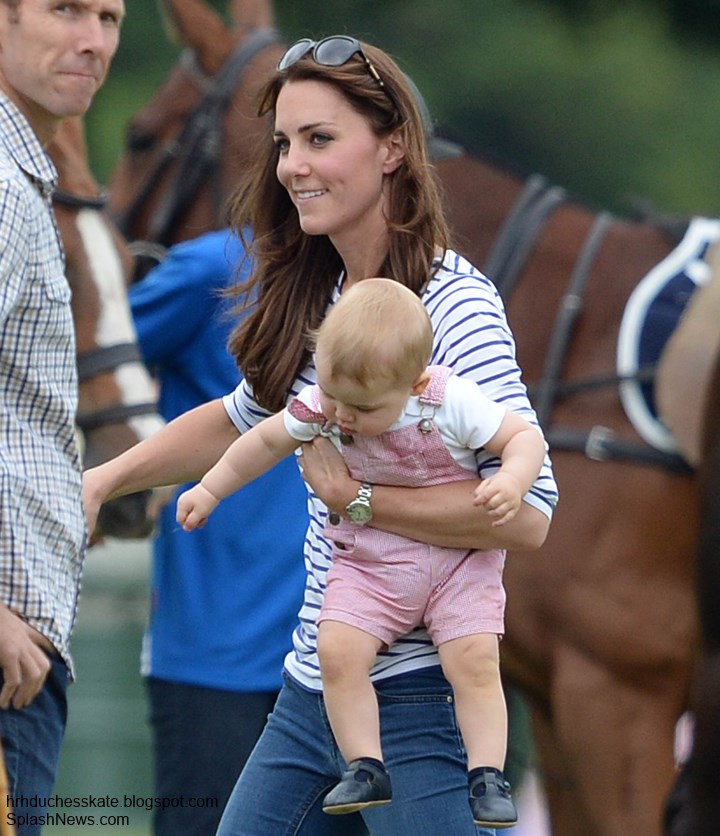 With an officer who accompanied the Cambridges to Anglesey. 'Shall I drive or would you like to?' 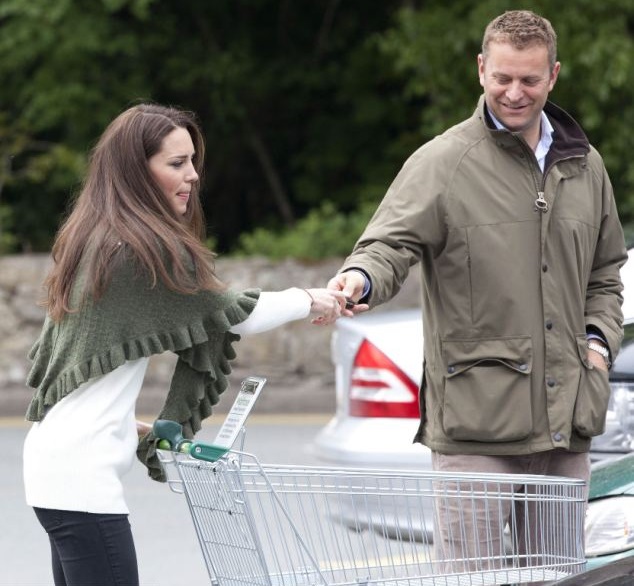 As with all roles, William and Kate's protection officers sometimes leave for personal reasons or to pursue others roles. The Duke and Duchess were said to be "surprised and upset" when their chief bodyguard Chief Inspector John Hourihan decided to leave in order to take a position as head of security at Berkshire's secure psychiatric hospital, Broadmoor. Before protecting the Cambridges he worked as a PPO for the Earl and Countess of Wessex. It was not revealed who replaced Chief Inspector Hourihan.

It's interesting to take a look at the role of the protection officer and the level of commitment it requires. During a royal tour or a private holiday officers can expect to be away from their families for weeks at a time. It's a 24-hour job with varying shifts and responsibility to watch over some of the most high-profile people in the world. For Kate, it must have been a difficult transition to adjust to being accompanied at all times. Undoubtedly at times the lack of privacy must present its difficulties. Judging from photos, she appears to have good relationships with them and they can enjoy a giggle and a chat, which is very important for people who must spend so much time together. 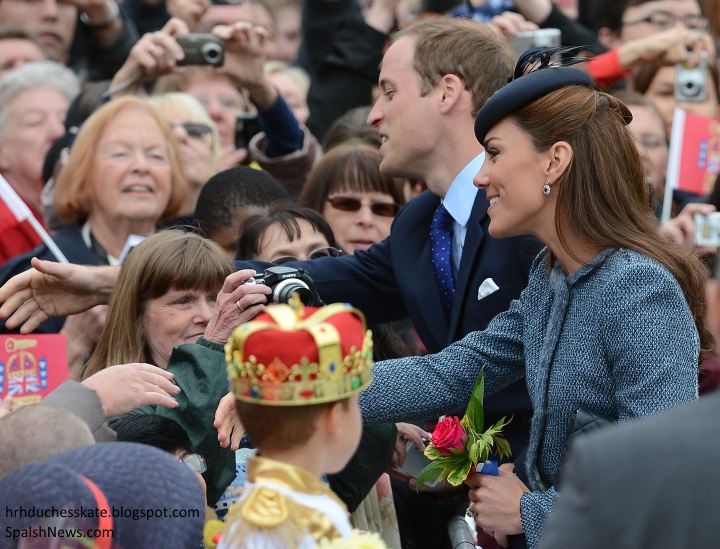 What are your thoughts on royal protection officers and if, like Kate, you had round-the-clock protection how would you feel about it?
Posted by Admin at 13:28:00