Hello-Hello, we hope you're all having a splendid week!

We're very pleased to be back with news of an upcoming engagement for the Cambridges. On Monday, 8 September the Duke and Duchess will formally open the Dickson Poon University of Oxford China Centre building at St Hugh's College.


More from the official press release:

'Their Royal Highnesses will meet members of St Hugh's College staff, students and friends of the centre before being shown the China Centre building. At the new China Centre, the Duke and Duchess will meet designers and building contractors who worked on the project, donors and academics.

In the courtyard, the royal party will join others for a traditional Chinese ribbon cutting ceremony.'


The new centre contains a dedicated library and reading room, which will provide a permanent home for books from the Bodleian Libraries' China Collection, as well as 63 student bedrooms and a range of conference and seminar facilities. The centre is named after Mr Dickson Poon, a Hong Kong philanthropist who donated £10 million towards the cost of the building. His companies own well-known brands including Harvey Nichols and S.T. Dupont.


We expect to hear more engagement announcements for September. Following such a dry spell there's usually a busier month or two afterwards.

Speaking of Harvey Nichols, Kate was spotted shopping for make up there by a couple of excited tweeters.


The English luxury department store stocks Kate's favourite Bobbi Brown range as well an extensive selection of other beauty ranges. Aside from beauty, their womenswear collection boasts labels favoured by the Duchess including M Missoni, Amanda Wakeley and Max Mara. The Duchess has been spotted browsing there several times before.

According to another fellow shopper the Duchess purchased mascara and the Clarins Restorative Total Eye Conentrate which is described as a "restorative eye care treatment that targets all signs of ageing. It retails for $83 with Free Shipping at Sephora.


It's an interesting sighting, as it means the Cambridges are not in Balmoral yet. It had been reported they planned to spend much of August there, but it would seem unlikely given sightings of William and Kate in Berkshire and the Duchess' Bicester shopping trip earlier this month.

Many of you were kind enough to get in touch and comment to share a wonderful story about 'Simpsonized Kate'.

The Duchess is lauded as a major style icon all over the world and Italian artist aleXsandro Palombo celebrated it in an entirely unique and delightful way - Kate as a Simpsons character. We just love this here at Duchess Kate Blog. I can vivdly recall watching The Simpsons after school many evenings as a child. I don't think there are many households where someone doesn't enjoy viewing the antics of Homer, Marge, Bart, Lisa and Maggie.

In several of the photos Kate is depicted alongside the Queen. 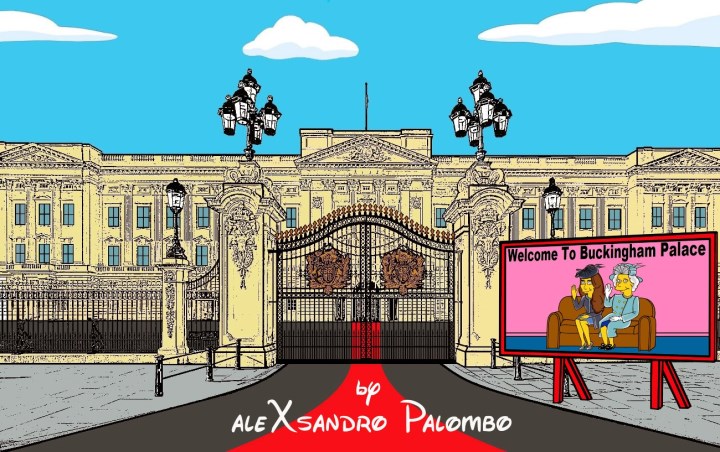 Kate in L.K. Bennett for her visit to Leicester with HM.

Mr. Palombo did a stellar job emulating some of Kate's most classic looks including the Alexander McQueen military-inspired look the Duchess most recently wore to Bletchley Park.

How well do you know Kate's style? Can you identify all of the pieces worn on 'Simpsonized Kate'. Test yourself with five looks we've selected randomly (Answers at the bottom of the post).

1. Let's start with an easy one. This military-inspired coatdress made it's debut for the Cambridges' arrival in New Zealand in April. Which designer made this memorable piece?

2. Kate wore this during her pregnancy. The pretty peach coat and custom-made dress are by two separate designers.

3.  Kate stole the show in this beautiful silver, one-shoulder gown, but who designed it?


4. Kate wore this when she made her first speech at East Anglia's Children's Hospices. A major clue: it's a piece she shares with her mother Carole or vice versa.


5. Pre-engagement gown worn to a Starlight Children Foundation event in 2009.


To view all of Mr. Palombo's 52 illustrations his blog is here.

This set of illustrations is not the first time the talented artist has been inspired by Kate's style or The Simpsons. Last year he combined both to feature Marge Simpson as a model wearing some of the most iconic dresses of all time. This included Kate's ISSA engagement dress.


Mr Palombo said: 'I made a strict and careful selection of what, in my opinion, has really influenced the style of the last 100 years.' Other famous looks which made the cut included a Catherine Walker gown worn by Princess Diana, Audrey Hepburn's Breakfast at Tiffany's Givenchy dress, and the pink suit Jackie Kennedy wore the day President Kennedy was assassinated in 1963. You can view the full selection at Vogue.

Now, time for those all important answers! 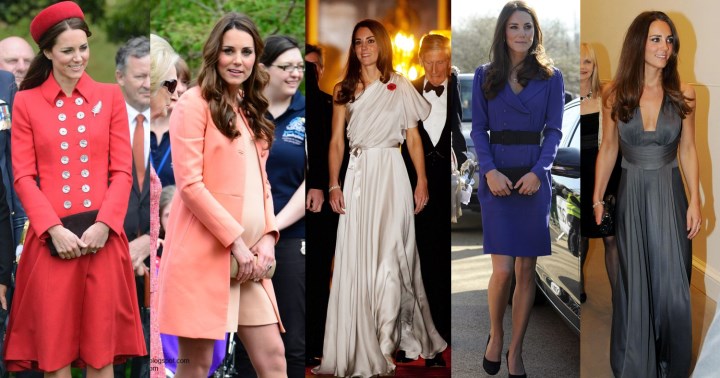