UPDATED: The Cambridges Commemorate the First World War in Belgium

One hundred years ago, World War One began. Many countries were deeply affected and still bear the scars of the conflict including Belgium. The Duke and Duchess of Cambridge and Prince Harry spent the day paying their respects and attending several events marking the centenary of the outbreak of the war. 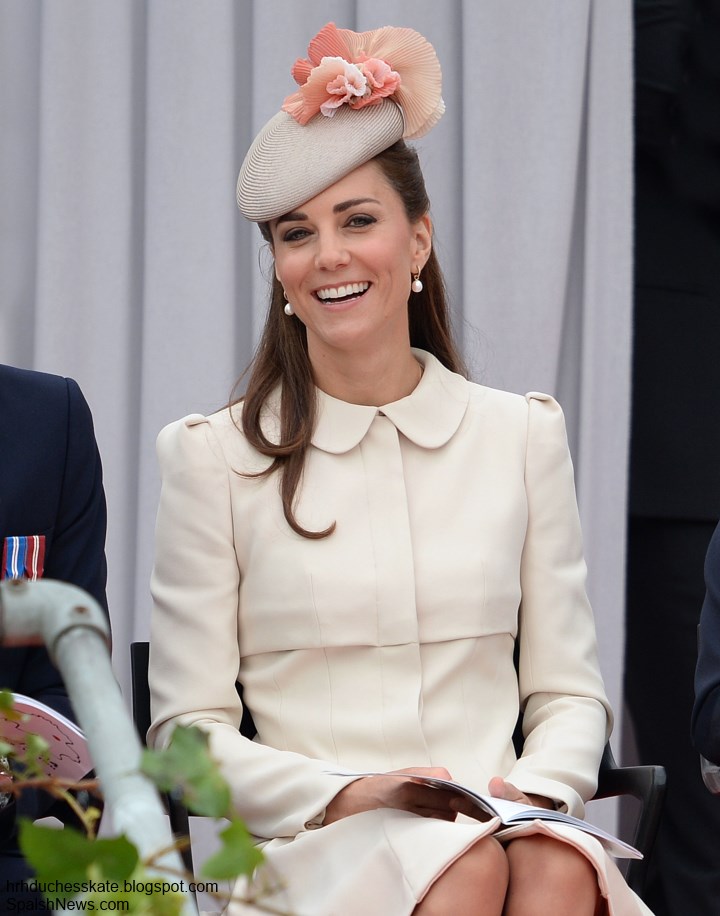 Today, 4th of August, marks the 100th anniversary of the invasion of Belgium by Germany which violated Belgian neutrality, bringing the UK into the war.


This morning The Cambridges arrived at L'Abbaye Saint-Laurent, a military hospital, where they were received by His Majesty King Philippe and Queen Mathilde of Belgium. 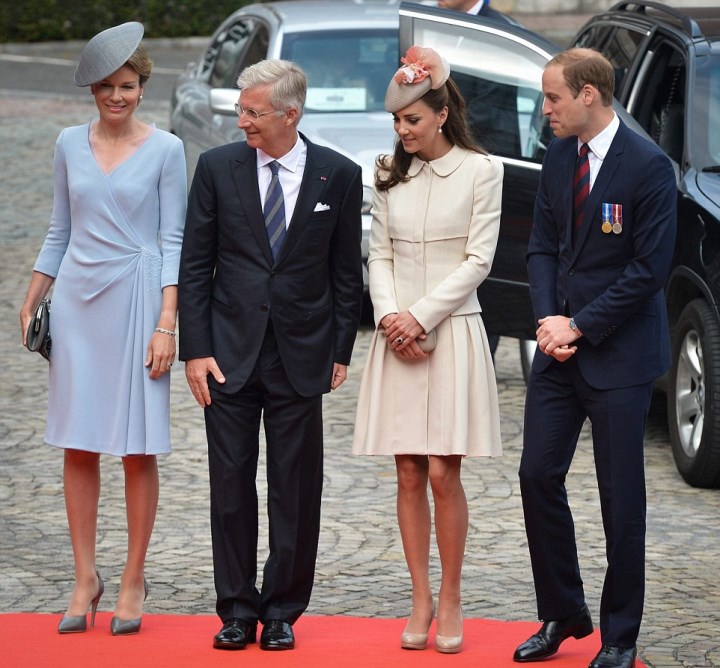 In recognition of their her status as King and Queen, Kate curtsied to Philippe and Mathilde. 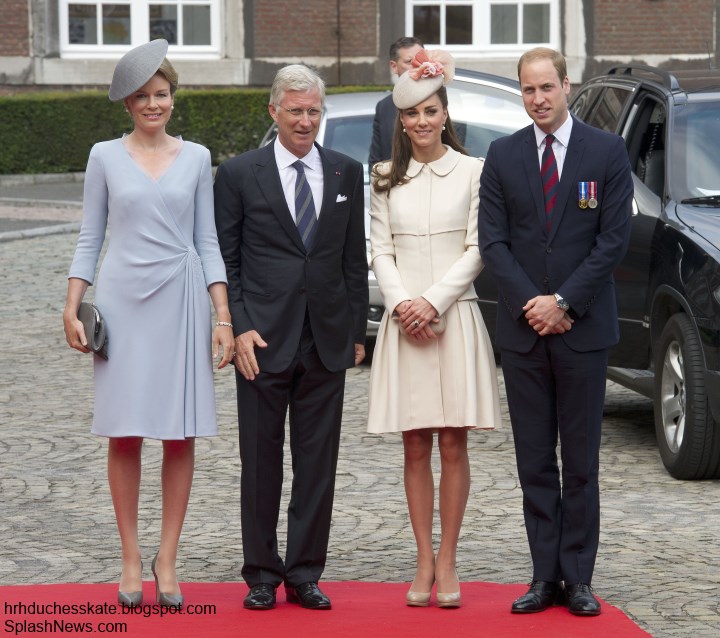 The Cambridges joined fifty heads of state at the international service of remembrance in Liège. 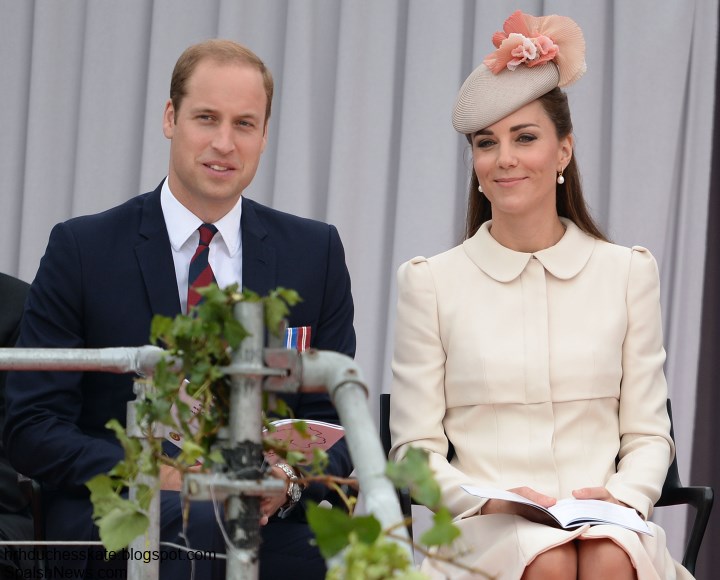 It was hosted at the symbolic Cointe Inter-Allied Memorial overlooking the city. Liège has an unforgettable history in terms of the war; it was the scene of the first major German assault on the western front after the invasion of neutral Belgium. 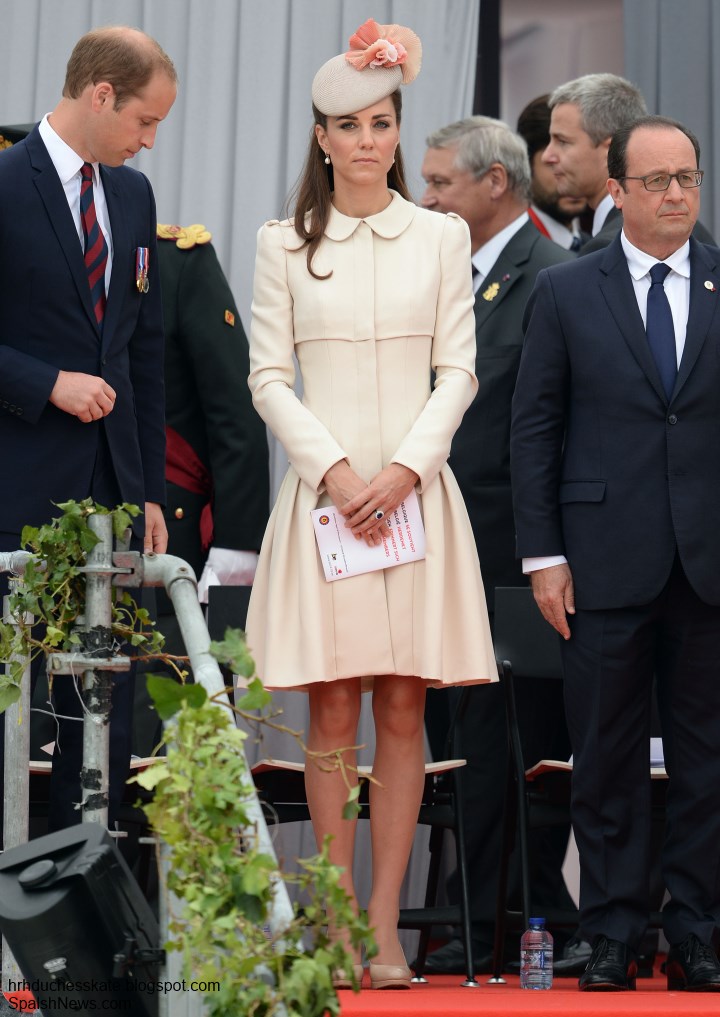 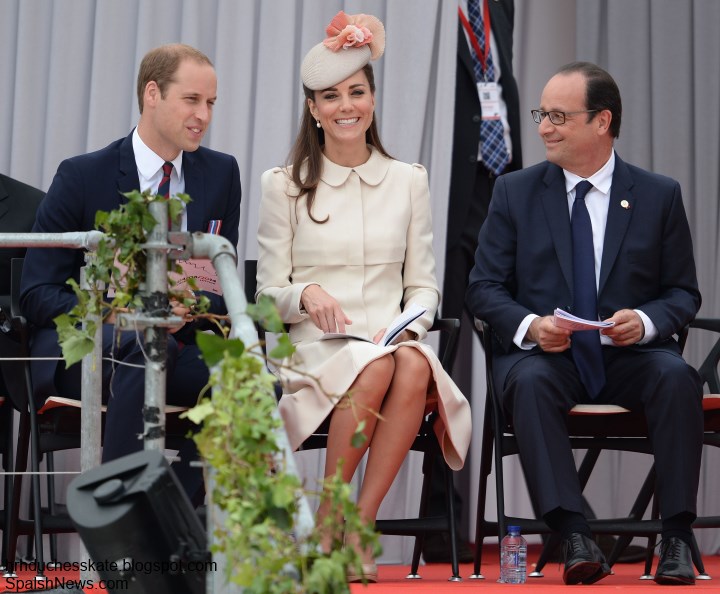 As the first city to have effectively opposed the invaders in 1914, Liège was chosen in 1925 by the International Federation of Ex-servicemen to erect an inter-allied monument. Designed by the architect Joseph Smoderen it contains monuments representing Italy, France, Russia, Poland, United Kingdom, Spain, Greece and Romania.

'These trenches have left an indelible scar on your land - they speak of the horrors of war but also of your forebears' courage. We were enemies more than once, today we are allies and friends. We salute those who died to give us our freedom. We will remember them.'


Balloons were released to commemorate all countries' flags. 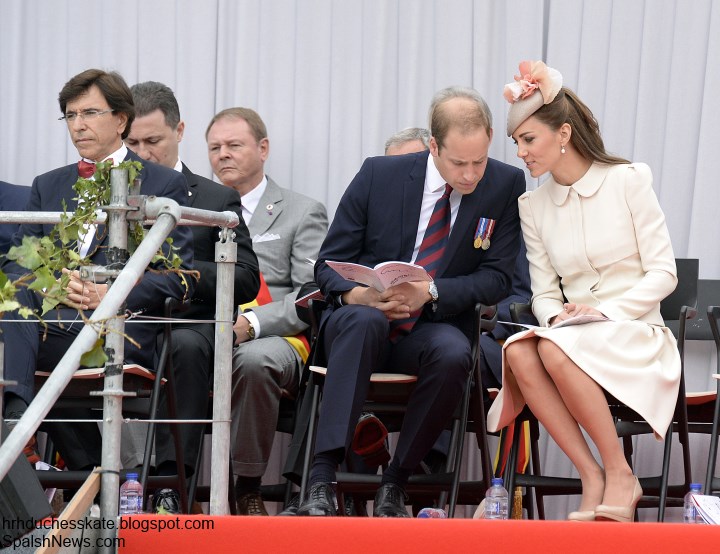 A lovely shot of the couple. 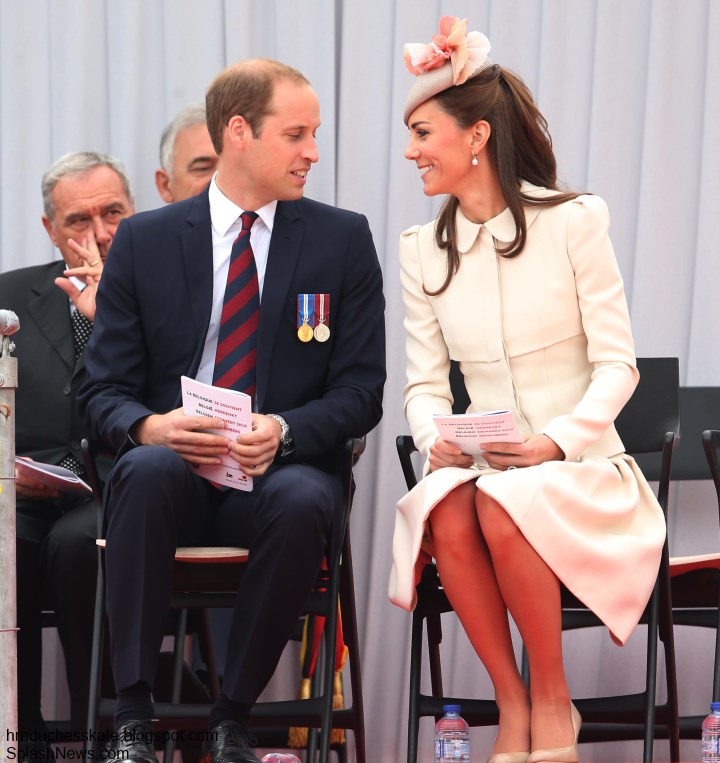 It was a sombre service. 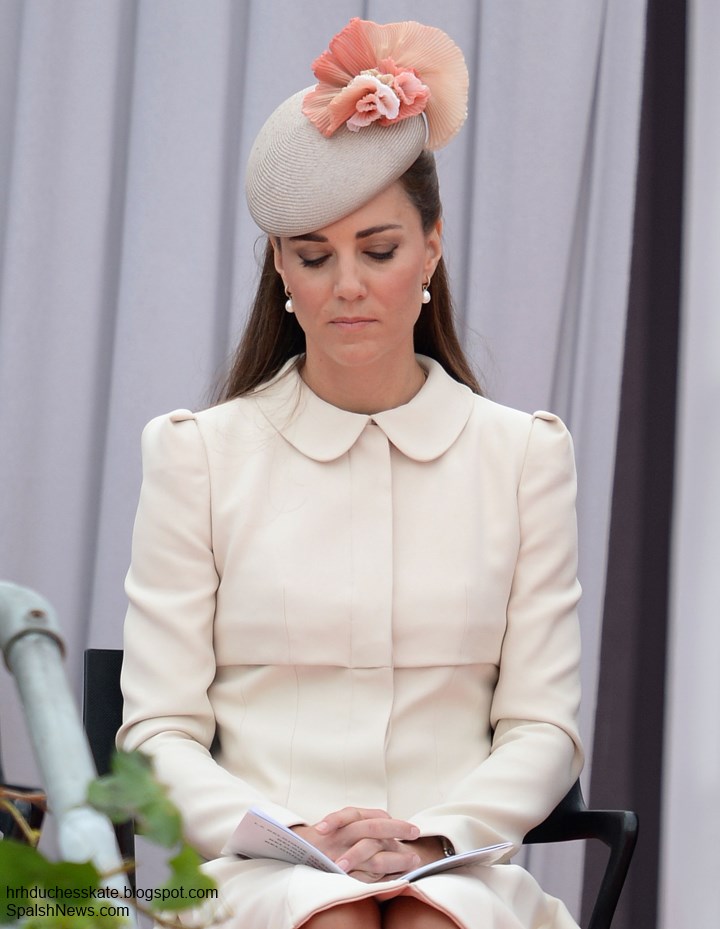 Looking back to 4 August, 1914 was a sombre time of reflection for many in Liége. The attack on the city lasted for eleven days until the last fort surrendered.


The city was left devastated.


Below we see German troops outside the Palace of Bishops; it is interesting to see the building a century ago under siege and again today where dignitaries from all over the world dined.


Elio Di Rupo kindly shared a photo from the luncheon.


The British ambassador in Brussels, Jonathan Brenton, said he was delighted members of the British Royal Family were there:

'These commemorations remind us of the important bond between our two countries and the sacrifices we shared together 100 years ago. It is vital that younger generations learn the lessons of the war by visiting memorials. So by paying tribute to the fallen, Their Royal Highnesses will show the way for younger generations to come.'


The significance of the day is being marked in a multitude of ways. Prince Charles attended a service in Glasgow reflecting the contribution of the Commonwealth and the BBC offered tremendous coverage. An excellent way for everyone to participate is by joining the #LightsOut campaign. Everyone in the UK (and elsewhere) is invited to turn their lights off from 10 p.m. - 11 p.m, leaving on a single light or candle for a shared moment of reflection. I thought this a particularly special idea and one I will be joining tonight.


A haunting quote from Foreign Secretary Edward Grey in 1914.

In the afternoon, William and Kate travelled to the town of Mons where they joined by Prince Harry. The trio attended a reception and viewed pictures and exhibits at the Mons Town Hall.

Mons is also steeped in history - it was the city of first British contact during WWI.

They stepped out onto the Mons Town Hall to cheering crowds.

Kate received a posy of flowers from a little girl.

The final event of the day was a service at St. Symphorien Military Cemetery. The royals were joined by Prime Minister David Cameron.

Before the service, the royals walked through the graves and paid their respects. 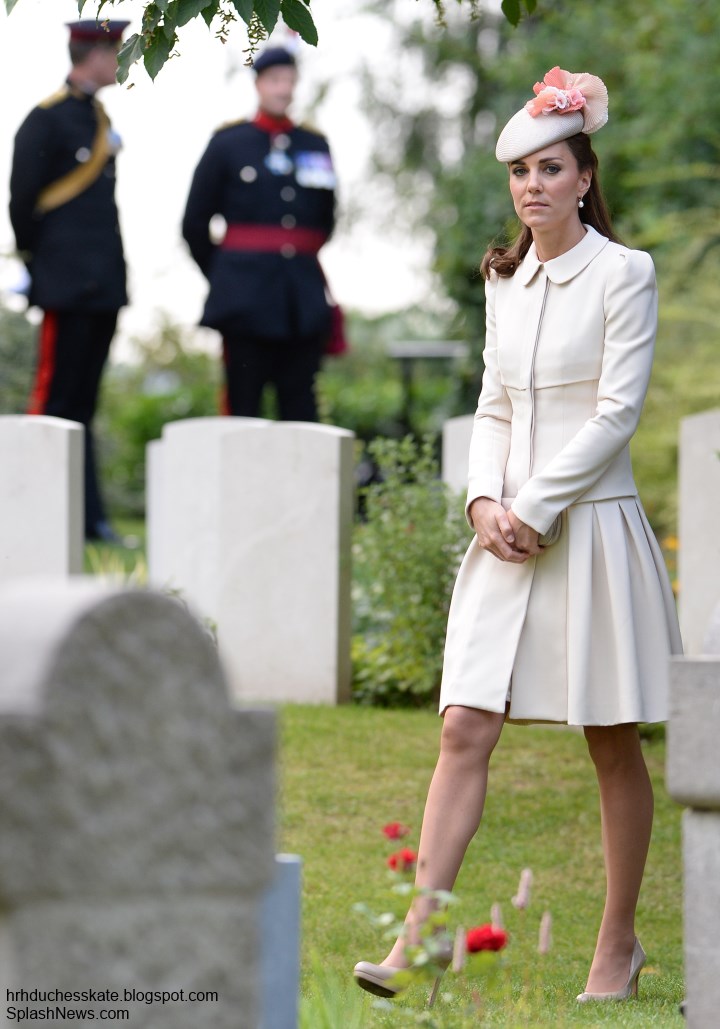 Both German and British soldiers are buried at St. Symphorien Military Cemetery. It is unlike other huge fields of war graves with small hills, flowers and winding paths marked by trees. It is incredibly special in that it gathers those together who died on opposing sides of the conflict. It's also significant for the royals to be there as the first and last British soldiers to die in WW1 are buried at the cemetery.


The land was donated by a Belgian during the war; British soldiers killed during the first weeks of the war were originally buried by German soldiers in groups of carefully arranged graves. Today it is looked after by the Commonwealth War Graves Commission.


The Duchess chose a cream ensemble for the occasion. 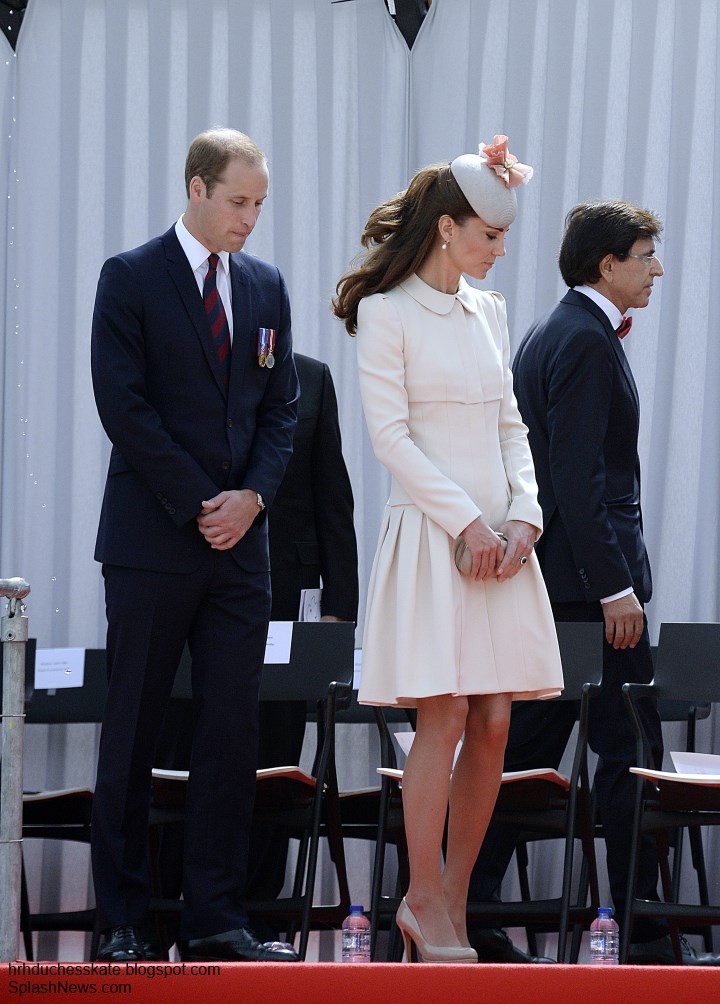 The Duchess wore an Alexander McQueen coatdress (with many thanks to our reader Lorelei who called the press office and received confirmation. You can read Lorelei's article for WWD here). As you can see it features a peter pan collar and drop waist. 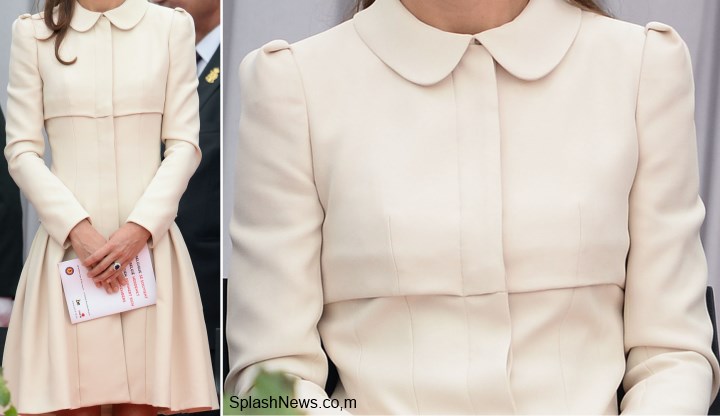 We see both of these elements present in current McQueen pieces. Below we look at the Cap Sleeve Dress and the Split V - Neck dress (two of a number of garments with the drop waist) and the Velvet Contrast Dress With Peter Pan Collar.

Kate's striking hat is by Jane Taylor Millinery (with thanks to Anna). 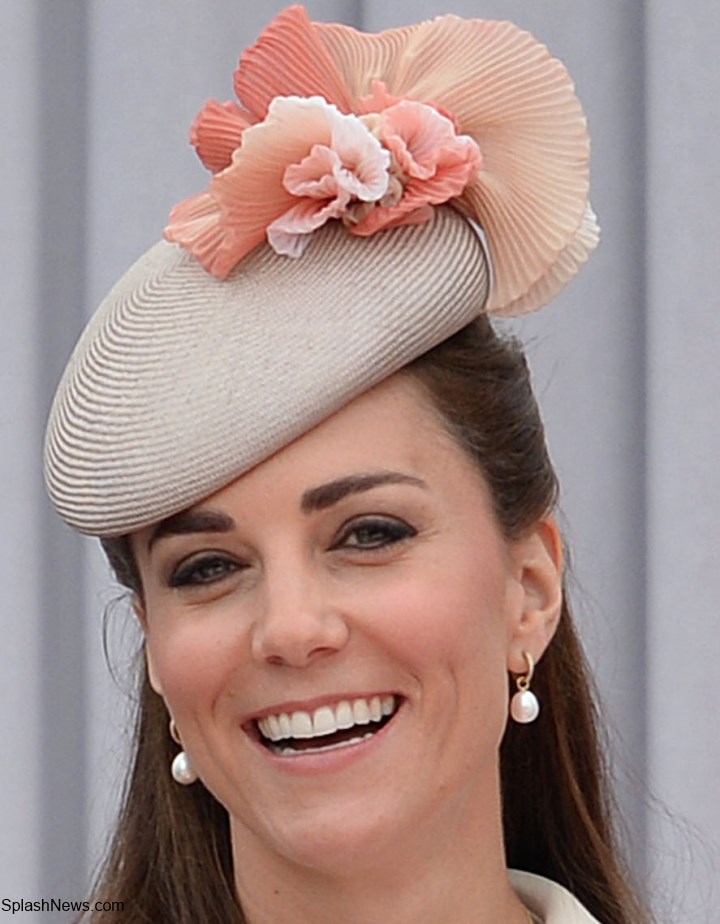 The Fleur-Ruffle Beret is from the SS14 Collection and comes in classic straw with hand-dyed ruffle detail. It is available to purchase online in several colours for £615.

Kate chose her trusty L.K. Bennett Sledge Pumps. Today is quite a busy with plenty of walking and standing for long periods of time and I expect she needed a very comfortable pair of shoes.


Kate accessorised with her her Annoushka pearls with Kiki McDonough hoops and grey McQueen clutch. 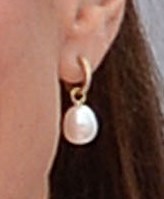 You can watch a video which includes Prince William's speech at YouTube.

It was a day to pay tribute and remember. The young royals did a fine job representing The Queen and the UK.

We leave you with a look at tomorrow's Daily Mail.


Continuing with commemoration events, William, Kate and Harry will visit the Tower of London's Poppy Installation in the Moat tomorrow.
Posted by Admin at 11:42:00