The Palace released the first of three portraits tonight to mark the first birthday of Prince George. The photo depicts the adorable Prince toddling towards the camera with his arms in the air wearing blue overalls.


The first photo was published in time for the Sunday papers whilst the remaining two will be released on the eve of the princely birthday - Monday night. It is believed they are both family portraits. They were taken by Press Association photographer John Stillwell, who also took official photographs of Prince Harry in Afghanistan. Speaking about George Mr. Stillwell described him as "very lively and very sure of himself and confident - a very determined young boy. I'd have to say he looks like his dad".


Clarence House shared the photo via their Twitter Feed with the caption "Look who's walking! Here's our little Prince ahead of his 1st birthday".


The photographs were taken when the trio visited the "Sensational Butterflies" exhibition at the Natural History Museum earlier this month.


The exhibition offers a fabulous day out providing fun for all ages. Visitors have the opportunity to spot species from around the world, fluttering above you and among the dense foliage. It's very much a learning experience for children as they hear about the metamorphosis of these creatures and experience more than fifty butterflies and moths from around the world. Below we see a little girl getting close to a blue morpho butterfly, which is among the largest in the world with a 5 to 8 inch wingspan, and comes from the jungles of Latin America.


Our regular readers will recall William, Kate and George were photographed leaving the exhibit after the photos were taken. With many thanks to Emily Rickard for sharing her photos and letting royal fans in on the news early (I think you had all guessed :))


The venue was specifically chosen because The Duchess of Cambridge is patron and it seemed an excellent way to support the museum; the location was ideal offering a picturesque background. As with previous official photos of Prince George, William and Kate have opted for a relaxed, casual feel, rather than the formality of the Palace. Choosing the butterfly exhibit meant George most likely had a very fun morning - and I'm sure a less stressful experience was had by all (one imagines encouraging a one-year-old to look at the camera could prove a little challenging).


For those who wish to support the museum or who have a keen interest in all things butterflies do take a look at the Online Shop which stocks some fabulous items and keepsakes, including a Sensational Butterflies Sticker Book, an Abstract Butterfly Scarf, a very pretty Forget Me Not Butterfly Pendant and a hand-decorated Butterfly Chest of Drawers.


The photo proved incredibly popular with the press. Below we see tomorrow's Sunday Telegraph.


How will Prince George celebrate on Tuesday? A Daily Mail story claiming the Middleton family already hosted a Peter Rabbit themed party at their Bucklebury home has been denied by reputable media sources. In fact, William was at a polo match when it allegedly took place.


Richard Palmer's article One is one year old! offers this information:

'Surrounded by his family and his parents' closest friends, Prince George Alexander Louis of Cambridge will be feted at a discreet celebration on Tuesday to mark the first anniversary of his birthday. Toddling across the floor and displaying his latest trick - opening and closing doors - the future King will be ready for a spot of mischief. '


The celebrations are in stark contrast to Prince William's first birthday. He was left with his nanny at Kensington Palace while his parents undertook an eighteen-day tour of Canada. They called to wish him Happy Birthday: "All I could hear was a few squeaks," Charles said at the time. It must be very difficult for any parent to miss such an important occasion. One gets the impression hands-on parents William and Kate will want to be there every step of the way and plan to put George and family life first, before royal duties.

I came across this lovely photoshoot of Charles, Diana, William (and his koala toy) taken a couple of months before his first birthday. .

George looked very cute in a navy polo shirt and blue and white stripe overalls by Petit Bateau with reverse straps (with thanks to Prince George Pieces). The US site still has the dungarees in stock for $50. They're described as "Baby boy short cotton cloth overalls with Oshkosh stripes. Patch kangaroo pocket on the front center of the apron. Petit Bateau sailboat print lining". It appears George wore the brands Short-Sleeved Cotton Bodysuit underneath his overalls. The little Prince also wore his Early Days 'Alex' Pre-Walker Shoes. 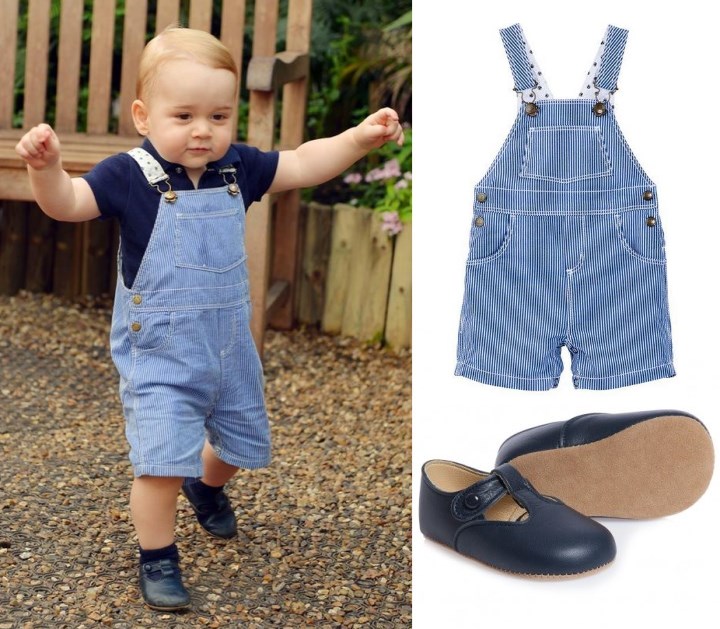 We'll be back on Monday night with the two remaining portraits along with the latest news. What do you think of Prince George's first birthday portrait?
Posted by Admin at 22:44:00