Happy Monday dear readers, we're back with a selection of updates today.

Recently we've seen and heard of private engagements undertaken by William and Kate. This morning The Duke and Duchess of Cambridge attended Place2Be's annual conference at The Royal Society of Medicine. Photos of Kate leaving the conference can be viewed at Just Jared.


The Duchess is patron of the organisation and tomorrow she will visit Blessed Sacrament School in London to view the progress of the charity's M-PACT programme, designed in collaboration with another of Kate's patronages Action on Addiction.


As mentioned above the media were not informed about the visit as it's deemed 'private' and I expect Kate particularly attended to improve her knowledge and learn more about Place2Be and its projects. A good patron needs to be well informed and it certainly shows dedication on her part to attend this morning's conference. This is a prime example of some of the behind-the-scenes work which goes alongside patronages. 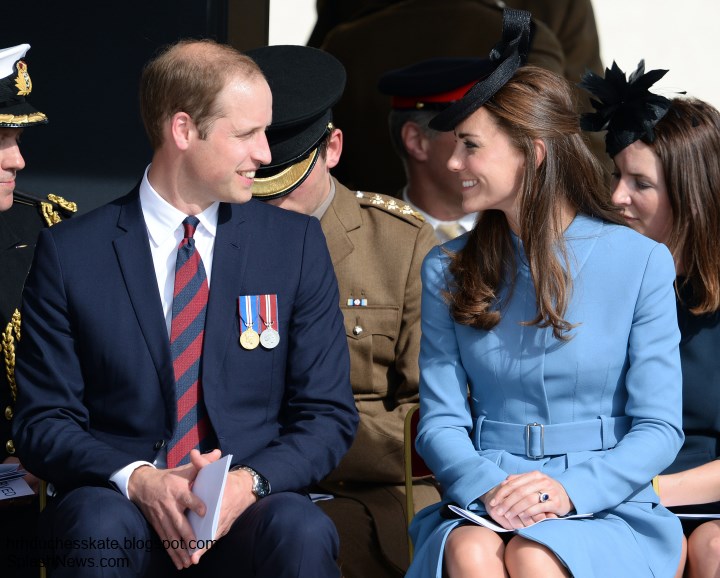 Kate looked summery and stylish in the Tory Burch 'Chrissy' Printed Jersey Dress from the Resort 2014 Collection. The multicolour dress features a detachable buckle fastening waist belt, button fastenings at the front and it hits just above the knee. It's a very pretty piece and perfect for the season.

Today another member of the Middleton family is making headlines both at home and internationally. Pippa Middleton gave her first interview to Matt Lauer from TODAY; the first part aired today and the second will be available tomorrow. Following three years in the limelight we were all eager to hear Pippa's thoughts, so what did she have to say? You can watch all the clips from the interview's first part at TODAY.com.

On the royal wedding:

'It sounds funny to say, but we saw it as just a family wedding. And actually, I didn't realize, perhaps, the scale until afterwards. We all took roles as any family would.'

On public reaction and bullying:


'I have felt publicly bullied a little bit just by, you know, when I read things that clearly aren't true or that, whichever way someone looks at it, it's a negative side. It's quite difficult because eventually I'm just paving my way and trying to live life like any 30-year-old.'

On her relationship with Kate:


'I mean, obviously she has pressures that she's taken on and things. But we spent a lot of time together. We still do a lot together as a family. We have a very normal, sisterly relationship. We're very close. And, you know, we support each other and get each other's opinions on things.'


'He's amazing. He's a very dear boy. And he's brought a lot of pleasure and fun for all of us, the whole family. I love children and babies so I would happily have one.'


Pippa also spoke to Hello! Magazine about her cross-country bike ride in America and other topics quite similar to her Matt Lauer interview. For those who enjoy the publication it features in this week's issue.


Why is Pippa suddenly speaking to the media? There's different theories doing the rounds including talk of a presenting career in the US. Listening to her speak about feeling 'publicly bullied' prompts me to think she may have felt it was time for her voice to be heard as opposed to the consistent untrue stories we see in the media. She came across as perfectly nice and very down-to-earth, however, I do feel this isn't a beneficial move for her and it would have been better to remain silent. It's a double-edged sword for Pippa because ultimately the media are primarily interested because of Kate and the Royal Family. What do you think?

Moving on to our fashion portion of the post. Kate's love it or hate it Lela Rose Circle Lace Peplum Dress is available to pre-order at Neiman Marcus for $1,595.


The ivory dress features circle-raglan short sleeves, a peplum waist and round neckline. Its form-fitting silhouette and knee length make it an elegant evening choice. Interestingly the dress is from the 2012 RTW Collection, so it's obviously been reissued due to demand following Kate's appearance in it. It's certainly a nice frock but I still haven't quite warmed to it. What about you?

What could be better on a Monday afternoon than taking a look at gorgeous party frocks - even better when they're by the one and only Jenny Packham. The designer recently debuted her Resort 2015 Collection and it has Kate written all over it.


Ang Lee's 2007 thriller Lust, Caution, which is set in China in the late thirties and early forties, was the starting point for the exquisite collection (Ms. Packham has previously taken inspiration from other movies including Picnic at Hanging Rock).

'I was inspired by the idea of presenting a collection of eveningwear that fused traditional Far Eastern style with Western fashions.'


The collection is adorned with jewel-studded illusion tulle and divine embellishment, a trademark of Ms. Packham's design the Duchess has come to favour.


Here are endless possibilities for Kate (now, all we need are some evening engagements added to her calendar). One has to appreciate Jenny Packham's attention to detail and her innate ability to stay true to her signature designs whilst offering new and exciting elements for her Resort Collection; a real crowd pleaser.


When designing the collection Erdem was "mulling over codes of femininity. The polka dot, the ruffle, the flower", all elements he's used repeatedly in the past and ones we would consider his signature today. The designer insists the collection is the most straightforward for him thus far: "It's where I really got an opportunity to explore who my woman is."

The collection doesn't scream Kate for me, however there are several garments I could see being customized for the Duchess; the dress below in the middle is a beautiful garment.


As we mentioned earlier in the post, Kate is visiting a school in London tomorrow to view the progress of Place2Be's M-PACT programme. We'll see you then! :)
Posted by Admin at 16:53:00