The Duchess of Cambridge Explores a Family Connection at Bletchley Park 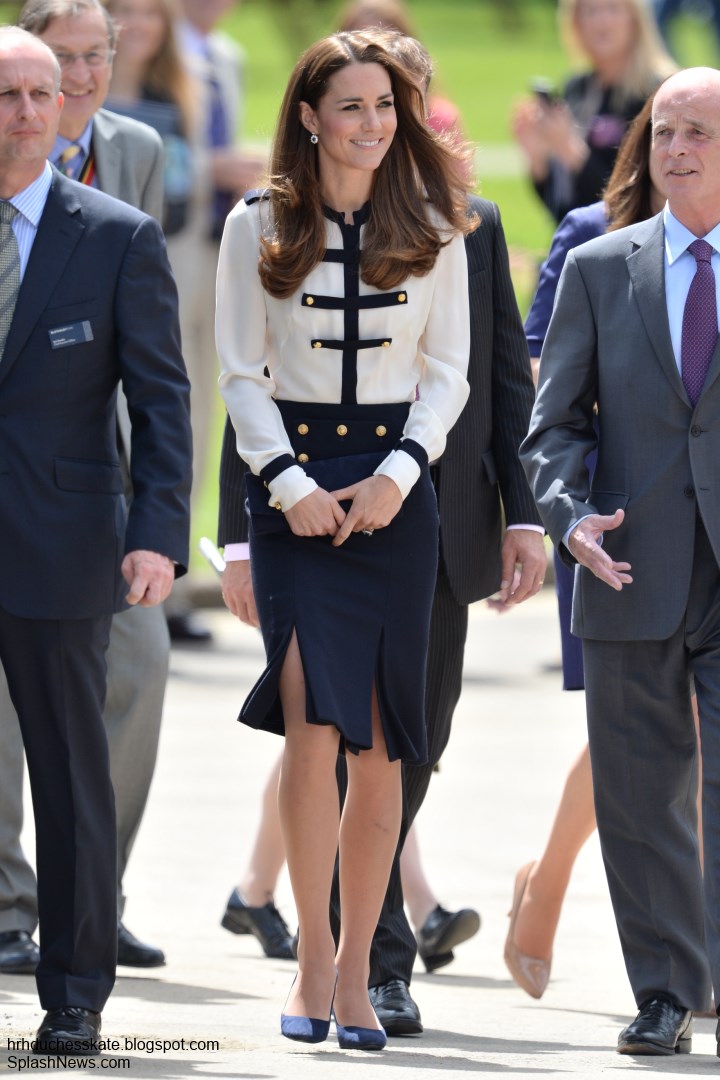 Kate's visit marks the completion of a year long restoration project, which has returned the heritage and education site to its World War II appearance. This engagement holds a special significance for Kate; her paternal grandmother Valerie Glassborow worked as a "Duty Officer" at Bletchley with her twin sister Mary during the war. Records show Ms. Glassborow worked in Hut 6, as a civilian member of staff. As with so many people who worked in British Signals Intelligence during the war very little is known about their work. Valerie's records were among many destroyed after the war.

Below we see a photo of Valerie shared by the Middleton family, there's certainly a resemblance there.


It must have been very interesting for Kate to see where her grandmother worked. 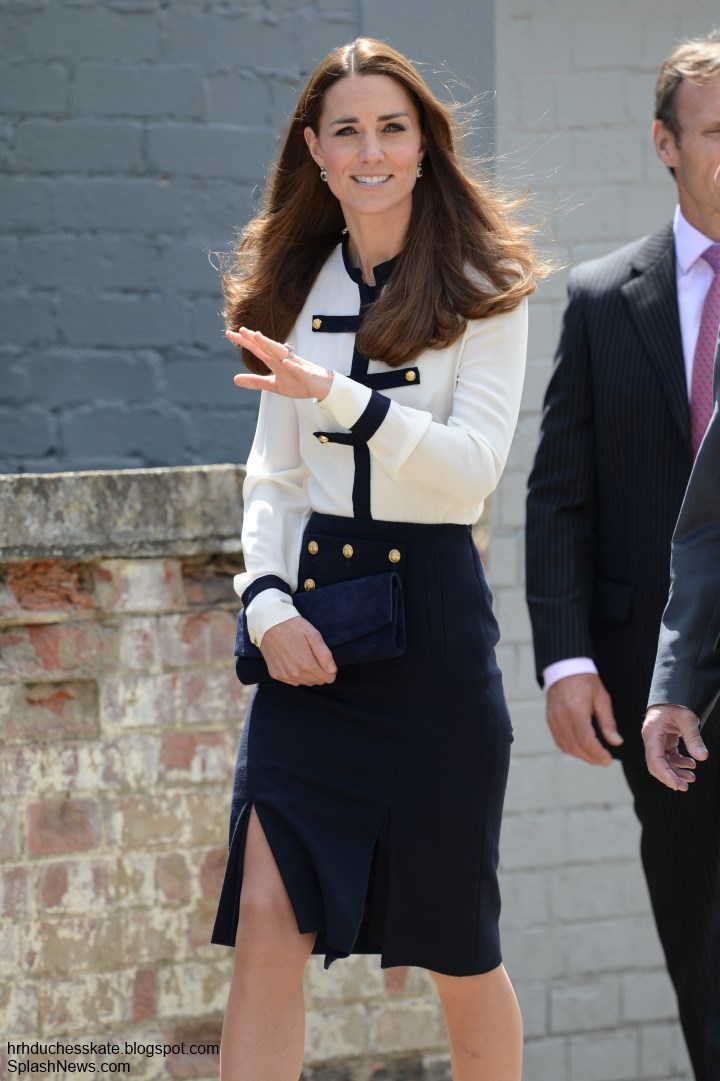 'Valerie and Mary were among the first to know the war had ended. Lady Marion Brody, who worked with the Glassborow twins, recalls: "On 15th August 1945 Valerie and Mary and I and two other girls were on the day shift, which was rather fortunate. Mr Williams came in, he was smiling, he said, 'Well done girls, a signal's been intercepted from Tokyo to Geneva; the Japanese are about to surrender.' We just sat there, shocked into absolute silence. It was a great moment, one that I've remembered all my life."

Valerie and Mary Glassborow went on to marry the Middleton brothers.'


Valerie married RAF pilot Peter Middleton in 1946 in Leeds and they had four children including Kate's father Michael Middleton. Valerie died aged 82 in 2006 and her husband Peter died on 2 November, 2010 aged 90. William and Kate's engagement announcement was delayed because of his death. Kate was very close to both of them. 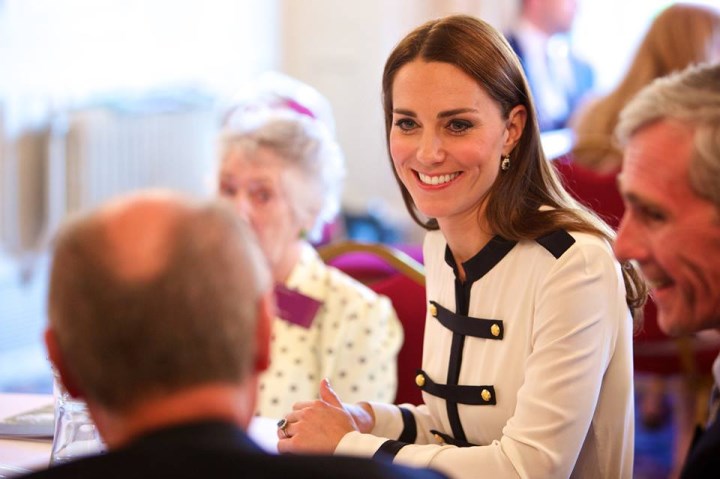 Kate said to Lady Brody; "What an incredible story that you shared your time here with my grandmother. It's so moving for me, and to be here as well. I was aware of it when I was a young girl and I often asked granny about it but she was very quiet and never said anything."

Escorted on a tour of the facility by Sir John Scarlett, Chairman and Iain Standen of the Bletchley Park Trust, the Duchess viewed interactive exhibitions and demonstrations before meeting the design and management team who delivered the project.  The Duchess also met WWII codebreaker veterans who worked at the Government Code and Cypher School.

Kate deciphering a morse code message using a replica radio that was used at Bletchley Park.

As regular readers know, your faithful scribe more than enjoys researching the history behind these royal visits and today's location is a most fascinating one. In August 1938, the arrival of 'Captain Ridley's Shooting Party' at a mansion house in the Buckinghamshire countryside was to set the scene of one of the most remarkable stories from World War II.


They appeared to be a group of friends enjoying the end of summer, even bringing a chef from the Savoy Hotel with them. But appearances were deceptive, the small group comprised of members of MI6 and the Government Code and Cypher School turned codebreakers. Their job - to see whether Bletchley Park would work as a wartime location.

'The mission was to crack Nazi codes and ciphers. The most famous of the cipher systems to be broken at Bletchley Park was the Enigma. There were also a large number of lower-level German systems to break as well as those of Hitler's allies. At the start of the war in 1939 the codebreakers returned to Bletchley Park to begin their war-winning work in earnest.'


The efforts of codebreakers including Alan Turing, Dilly Knox, John Jeffreys and Peter Twinn is said to have shortened the war by two years. Kate must be incredibly proud of her grandmother and great-aunt knowing they served a role in this endeavour.


Today, the stories remain a firm favourite among audiences. No doubt you've heard of the acclaimed TV series Bletchley Park or the upcoming Alan Turring biopic The Imitation Game starring Benedict Cumberbatch (a gentleman who has quite a few fans here :)) and Keira Knightley.


Maintaining such a vital part of history is incredibly important for future generations to enjoy. The £8 million heritage lottery-funded restoration has seen more building work on the site than at any time since 1944, at the peak of war. The work carried out allows visitors to experience what it was like for codebreakers. 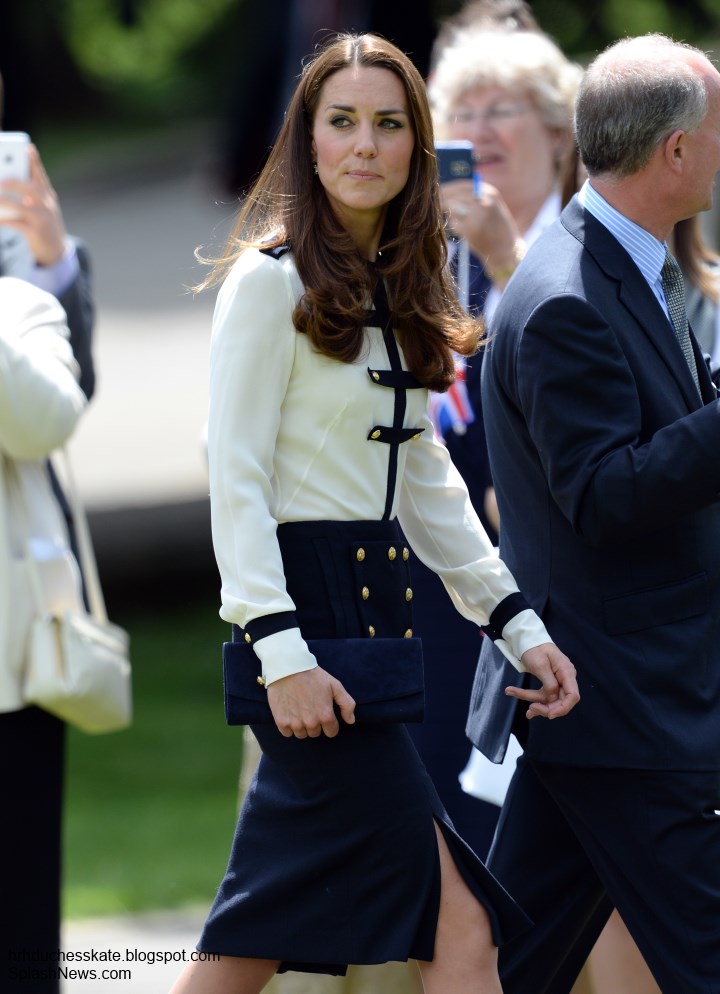 Insightful exhibitions, a children's playground and a visitor's centre have been excellent additions, ensuring all ages can enjoy.


Kate planted a tree to commemorate the visit and the completion of the extensive restoration project.

It was a royal repeat for the Duchess today, who selected an Alexander McQueen military-style blouse and skirt she first wore in 2011 for a visit to Birmingham where she and William met local residents and emergency services who had responded to the riots in the city. 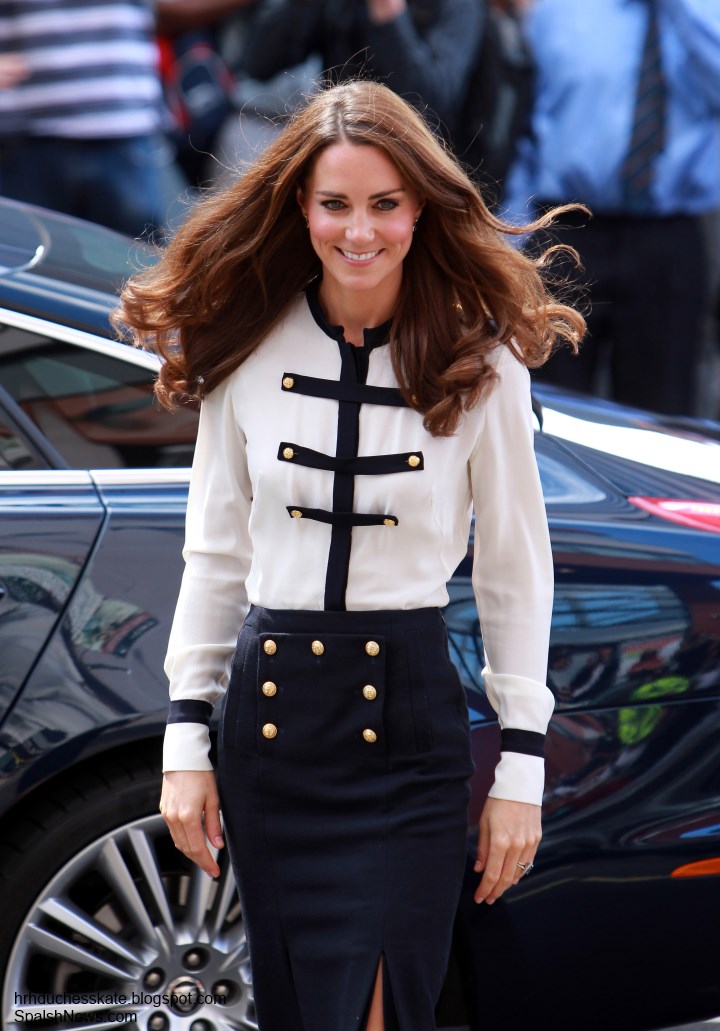 Kate's Military Silk Georgette Blouse originally retailed for $1,355. It features gold button-fastening, button-fastening cuffs and a flared hem. The $995 Embellished Wool Crepe Skirt in navy is a versatile piece with gold anchor-embossed button embellishment. Both pieces are from the Pre-Fall 2011 Collection. 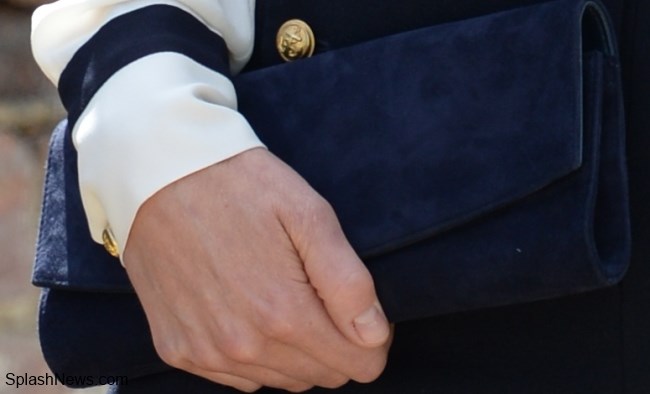 The Duchess accessorised with her sapphire and diamond earrings. 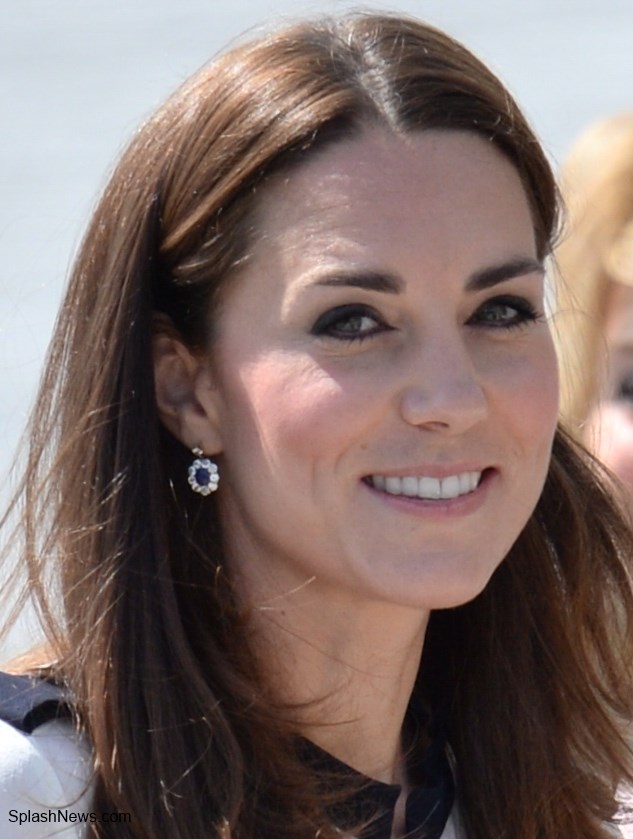 Kate completed the navy look with her suede pumps. 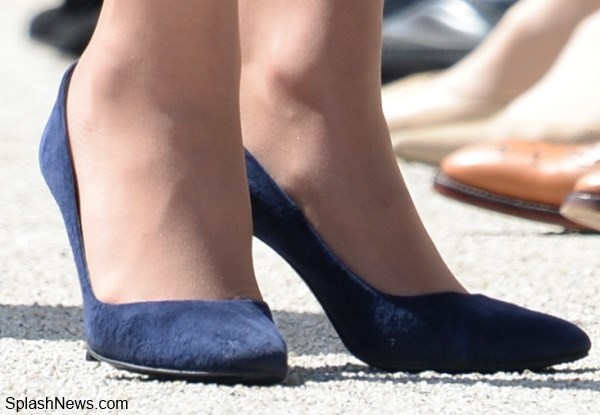 I thought it a wholly appropriate choice for today with the look's military theme, and from a sartorial perspective it's a very stylish ensemble. Professional, sophisticated yet chic and youthful. I was very much hoping we'd see this look again. Do you like it? 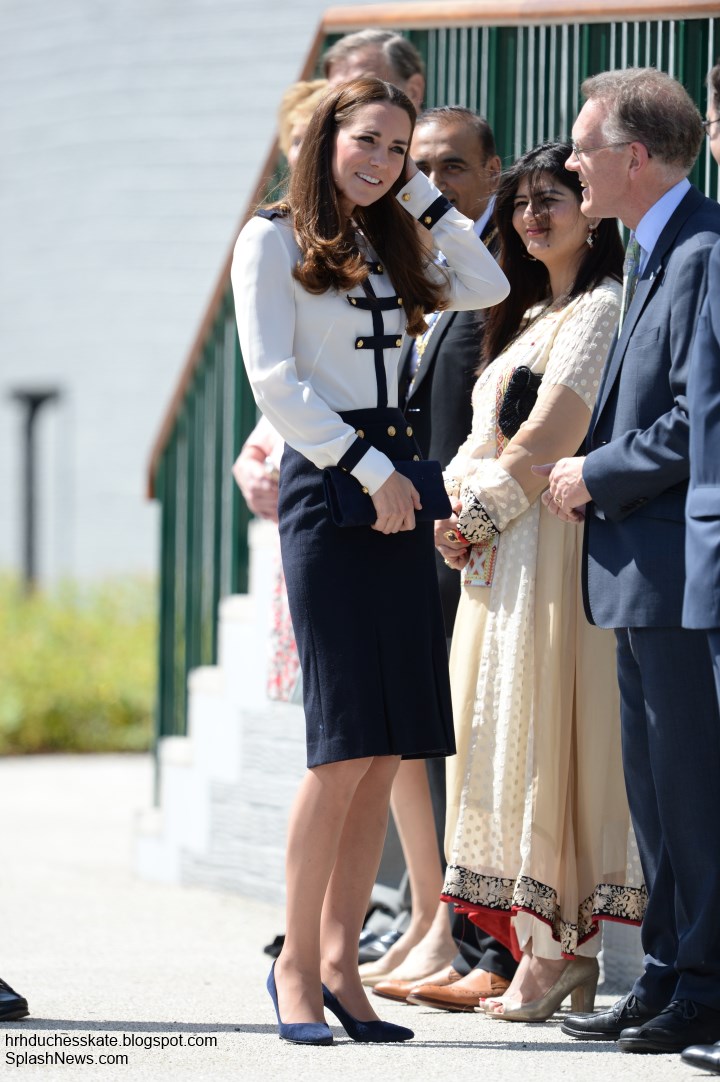 We have one other brief update to share. Kate's very popular Roamer Day Dress is now available on the Zimmermann website for $520. If your size is sold out do check back as they appear to be restocking and updating their website frequently. We've added links to the dress on our Shop Kate's Style page and will continue to do so as it becomes available at other online retailers.

Kate does not have any announced engagements for the remainder of June, however, I'm not ruling out the possibility she may do something for Children's Hospice Week which ends Friday. Wimbledon begins on Monday and I'm sure the Duchess will enjoy a match or two!
Posted by Admin at 12:34:00