Kate visited the organisation's Treehouse Hospice to learn more about the services that are required for families with seriously ill children, and especially the role that volunteers can play for children's hospices, which is an issue she is exploring with her foundation.

'Around the clock support is crucial for children receiving palliative care. They and their families often need help every hour of the day, both in hospices and at home. As Patron of EACH, I have seen first-hand this remarkable and varied work and just how vital the support of staff and volunteers can be to the families of children with life limiting conditions.

It has been wonderful to see the fantastic public support for Children's Hospice Week over the last few days. Please continue supporting your local children's hospice in whatever way you can.'


The Duchess is a committed supporter of children's hospices and wider palliative care, which provides a vital lifeline to children and their families at a terribly difficult time. One of Kate's first patronages announced in January 2012 was EACH, her response to an issue she personally finds very moving, no doubt even more so since she became a mother. It is an area she hopes to continue to learn more about and continue to lend her support to. I had a feeling Kate would do something for Children's Hospice Week and this visit seemed a perfect way to mix behind-the-scenes charity work with raising awareness.


Of course this isn't Kate's first visit to Treehouse Hospice. In March 2012 she carried out her first public engagement with EACH as its patron, opening the facility. 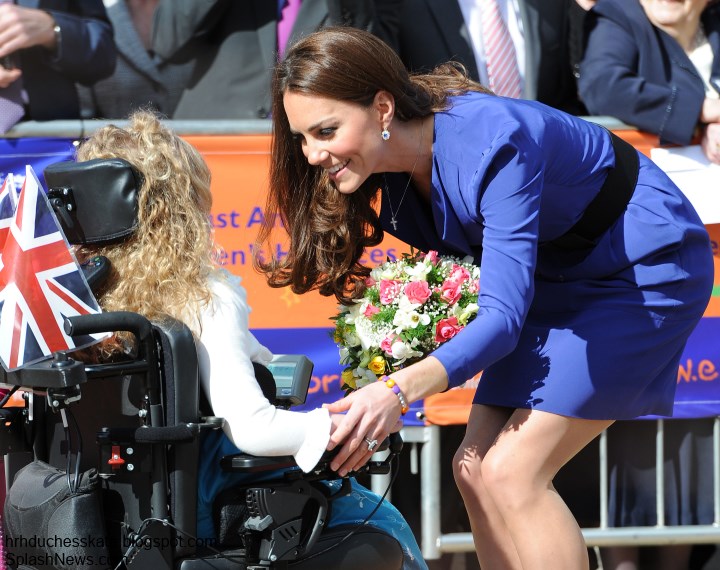 During the visit, Kate made her first public speech in which she described her admiration for EACH: "What you do is inspirational; it is a shining example of the support and the care that is delivered, not just here, but in the children's hospice movement at large, up and down the country."


Since then Kate has carried out a number of engagements at hospices both at home and abroad. Most recently, during the royal tour of New Zealand and Australia, Kate visited Rainbow Place in Cambridge and Bear Cottage Hospice in Sydney.


Children's Hospice Week is the only awareness and fundraising week for children with life-limiting conditions and the services, like hospices, that support them. This year Children's Hospice Week has promoted the #WeCare247 campaign to focus on the complex round-the-clock care that seriously ill children require, and the roles that children's hospices and palliative care services are there to provide, from nurses and carers to counsellors and volunteers.


There are a number of ways to support the week including fundraising and making a donation. One can make a single or monthly donation by visiting the official website. If you're considering supporting Children's Hospice Week or your local hospice I would urge you to watch Tilly May's story, a brief video which offers a first-hand insight into the importance of hospices from a parent's perspective.

For the visit, ensuring the focus remained on the importance of hospice week Kate chose a Diane von Furstenberg dress she's had in her possession since 2002 when she wore it to a party at St. Andrews University. Kate wore it again in 2005 for dinner with Prince William.


The Duchess also wore it in 2012 when the couple departed Sabah, East Malaysia.


The pretty pink and black dress features a paisley pattern. It is 100% silk with three-quarter length sleeves in a v-neck style with a self-belt. It's unmistakably DVF, even though it's a design from over a decade ago. Ms von Furstenberg's signature elements are very much apparent.


A closer look at the print.


It's excellent to see Kate carrying out under-the-radar charity visits. Without the media there, one imagines it offers a much better opportunity for the Duchess to speak with staff and families. This is exactly the sort of organisation she can impact positively through her patronage, and what a very special cause to support.
Posted by Admin at 13:05:00