It's Christopher Kane for Order of the Garter

The Duchess of Cambridge joined members of the Royal Family for the annual Order of the Garter ceremonies at Windsor Castle this afternoon.


Every June, the Knights of the Garter gather at Windsor Castle where new knights take the oath and are invested with the insignia. A lunch is given in the Waterloo Chamber, after which the Knights proceed to a service in St. George's Chapel in their deep blue velvet robes. The procession is a special part of the event, with members of the public from at home and abroad gathering to witness it.


The Waterloo Chamber is a large room, dating from 1830-31 dedicated to the military defeat of the French Emperor Napoleon Bonaparte. It is a magnificent room, filled with historic portraits, soaring ceiling heights and a very long table perfectly suited to hosting the annual luncheon.


Kate chatted with The Countess of Wessex.

Royal Knights and Ladies include The Queen, The Duke of Edinburgh, Prince Charles, The Earl of Wessex and Prince William.

William looked over at Kate as he walked past.

Kate has always found this particular look on William quite amusing :)

The Order of the Garter is the most senior and oldest British Order of Chivalry, founded by Edward III in 1348. The Order honours those who have held public office, contributed in a significant way to national life or who have served the Sovereign personally.

'Over the years, a number of nights have been 'degraded' for the crimes of heresy, treason or cowardice - such as Lord Scrope of Masham (a childhood friend of Henry V), and the 3rd Duke of Buckingham in 1521. Charles I wore his Order to his execution in 1649.'


Below we see Henry of Grosmont, Earl of Lancaster, the second recipient of the order, shown wearing his robes in the fourteenth century. I thought it interesting to do a side by side comparison with the vestments and accoutrements worn today. The velvet blue mantle (robe) is worn with a Tudor bonnet of black velvet with a plume of white ostrich and black heron feathers.


The insignia of the Order of the Garter.


Interestingly, The Queen appoints Knights and Ladies entirely at her own discretion without advice from aides or ministers. There can only 24 knights plus the Monarch and Prince of Wales at any one, so it is an enormous honour to be chosen. In 1987 Her Majesty decided that women should be eligible for the Garter in the same way as men.

Below we see the late Lady Mary Soames, youngest daughter of Sir Winston Churchill (also a former knight of the order), taking part in the parade in her Order of the Garter ceremonial outfit.


The Order's motto is 'Honi soit qui mal y pense' which translates to 'Shame on him who thinks evil of it'. 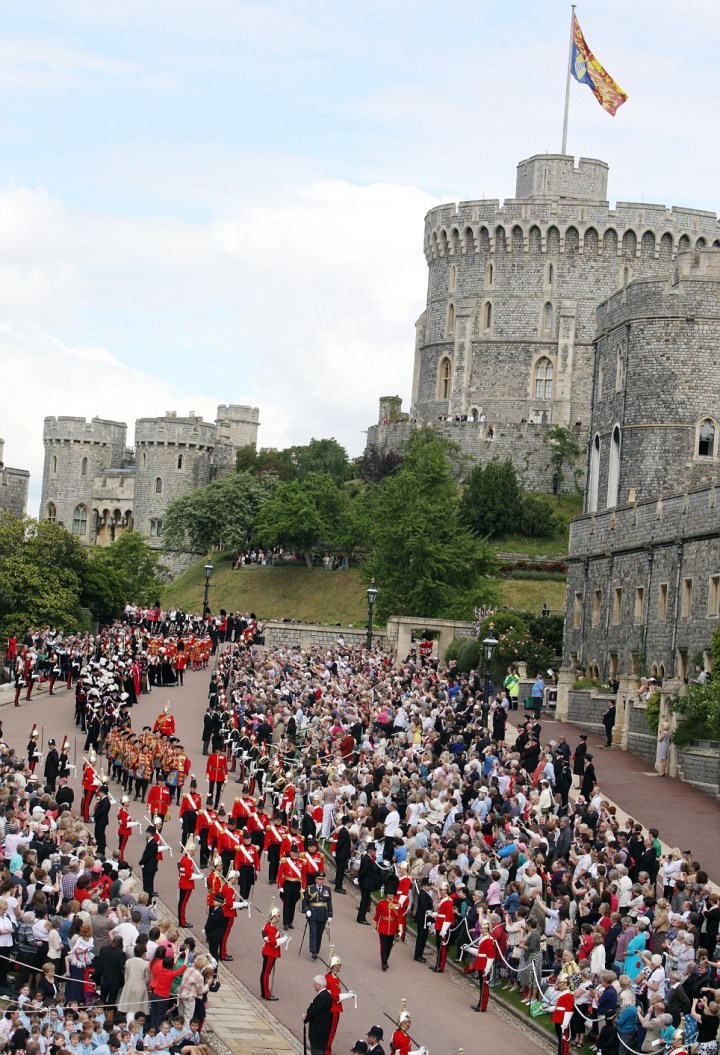 It is a majestic event visually.

After the ceremony, the royals travelled in a carriage procession. William and Kate joined Charles in the second carriage.

Kate chatting with her father-in-law.

A lovely shot of William and Kate.

It is the fourth year Kate has attended the ceremony. She first attended in 2008 when William was installed as a knight wearing her black pin dot suit and a Philip Treacy hat. At the time, it was thought unusual for a girlfriend to attend but demonstrated the seriousness of their relationship. In 2011 Kate looked elegant in a Katherine Hooker design, and in 2012 she wore that divine cream Alexander McQueen coatdress with her Reiss 'Peacock' dress underneath.


One of our dear readers Kate from Texas was there today and had a wonderful time. Kate kindly shared her photos with us. 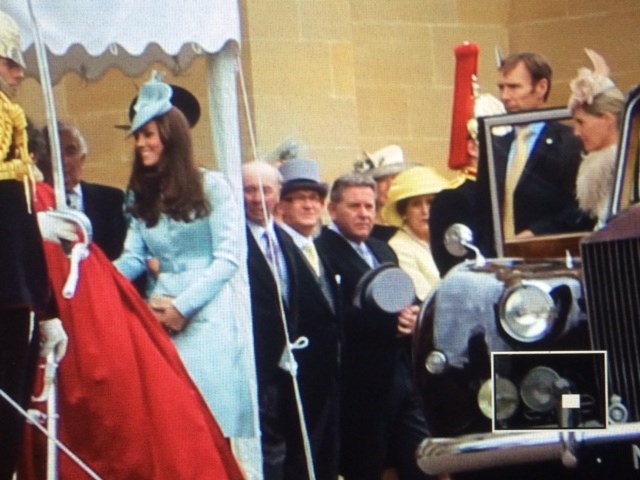 Kate (our Kate from Texas) also got a smile from Prince William :) 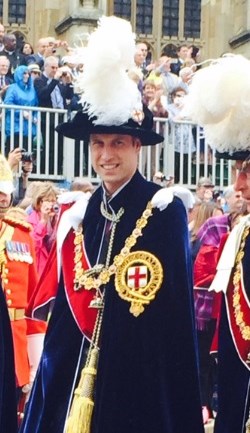 The Duchess wore the custom made fitted coatdress by Scottish born designer Christopher Kane she wore to the London 2012 Opening Ceremony. The silk satin piece features four panels per side and a self-belt. The Duchess has been favouring this icy blue colour recently, choosing a similar hue for Trooping The Colour.

What do you this of the coat?


Kate debuted another new pair of beige shoes. It has been suggested they're the Jimmy Choo 'Gilbert' style in taupe leather. We'll update when we're certain about the designer.

And completed the look with these gorgeous earrings. They remain unidentified at this time.

For those who enjoyed today's appearance, we'll be seeing the couple attend a very similar one in Scotland next month - The Order of the Thistle service. Kate is visiting Bletchley Park on Wednesday; we'll see you then! :)
Posted by Admin at 17:10:00