Welcome to our tour polls results post. You voted in your thousands for Kate's sartorial pieces and memorable moments featuring Prince George and now the results are in. So without further ado... 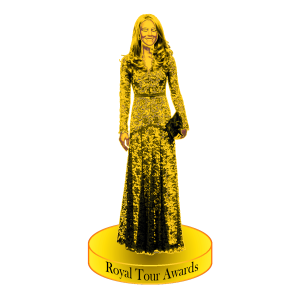 With almost 8,500 votes, the coat poll proved to be our most popular from the tour, but there was one clear winner from very early on - the bespoke dove grey Alexander McQueen coat Kate wore on Easter Sunday for a church service - and upon reflection it's easy to see why it proved so popular. It was a very elegant, fitted, regal piece befitting a future queen. 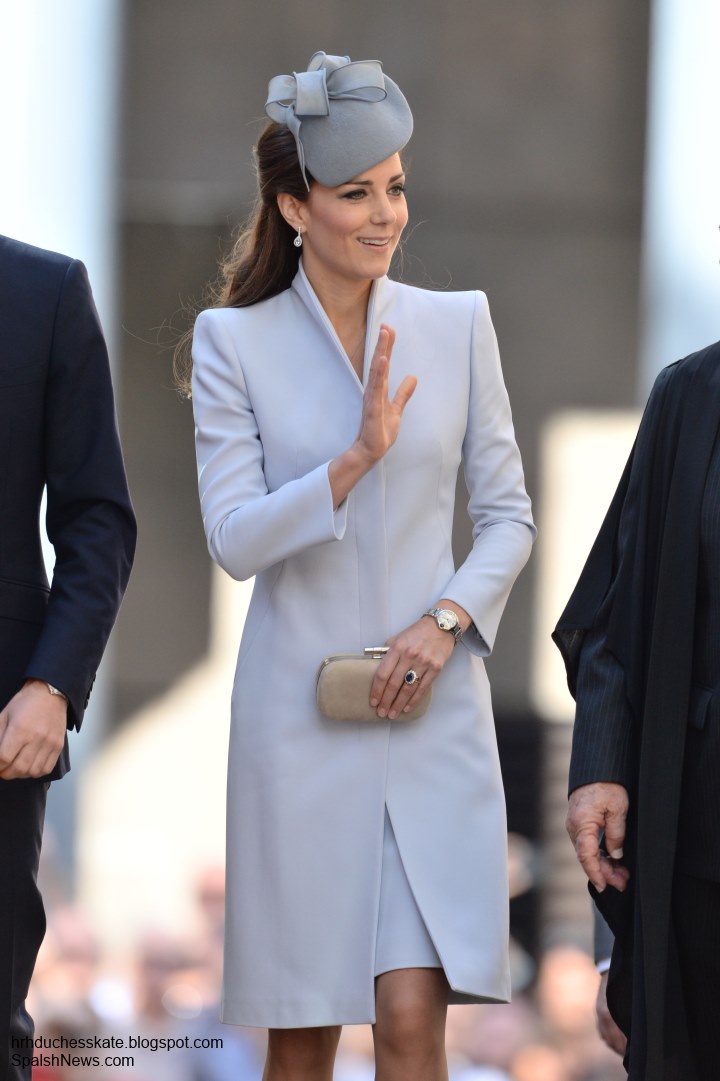 We all fell in love with Kate's L.K. Bennett Lasa Poppy Print Dress and it comes as no surprise you voted for it as your favourite dress from the tour. The £245 sheath dress was the first high street dress the Duchess wore during the tour, and the popularity of the piece is a testament to just how far brands such as L.K. Bennett have come in terms of competing with designers. 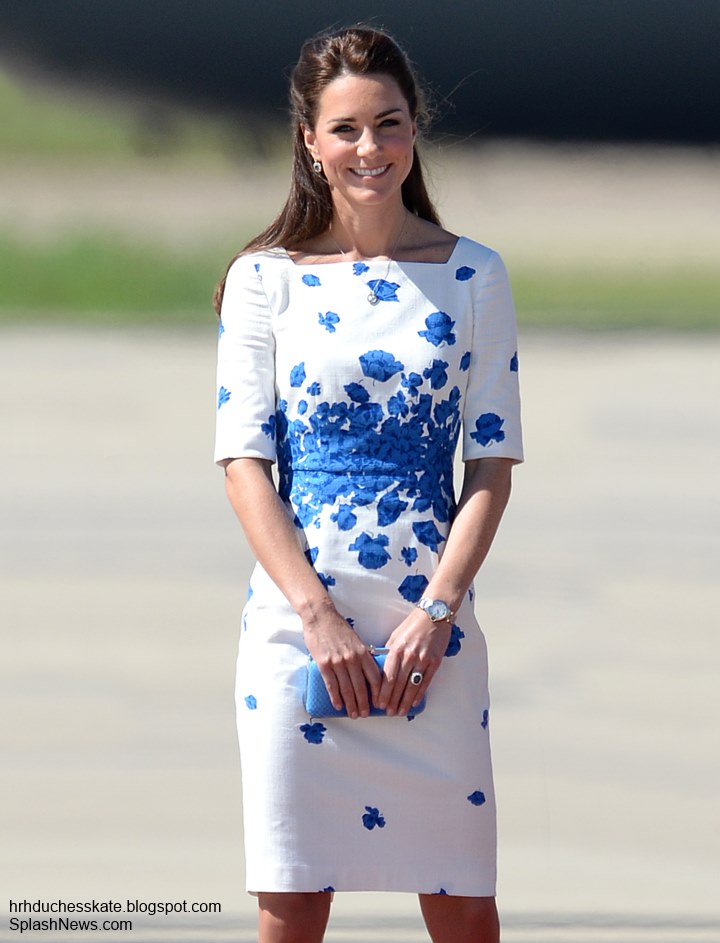 Kate's pale pink Alexander McQueen peplum top and pleated skirt wins this one. Once again we see the collaboration between Her Royal Highness and Sarah Burton working well. 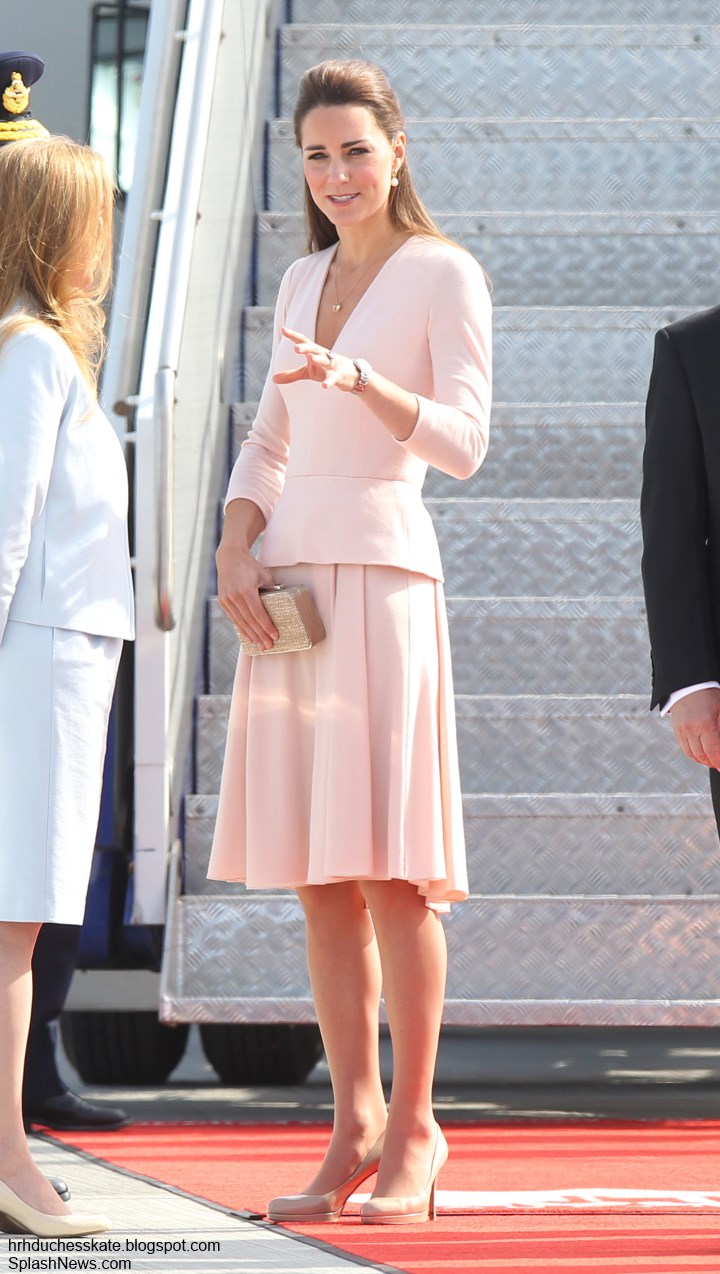 In terms of casual looks, Kate's outfits were quite similar which explains the fact that this was our closest poll, however, Kate's appearance at a rugby match in Sydney is our winner. It was a great look, casual and comfortable with the addition of the chic Beulah London Eden Scarf.

I thought it interesting to share the least popular sartorial pieces Kate wore during the tour, too. The vivid green Catherine Walker coat was an obvious one for me. The moment I saw it, I instantly thought it didn't work well for the Duchess (in fact, I cannot think of anyone it would work for). We also have the Hobbs Wessex Dress and the Rebecca Taylor tweed suit - most likely considered underwhelming pieces because they were repeats. 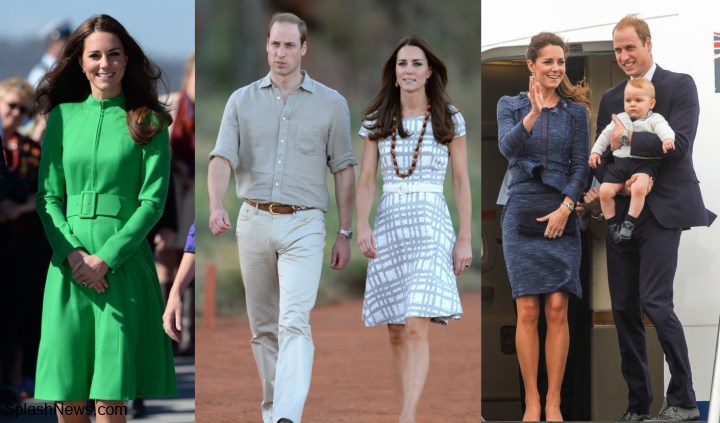 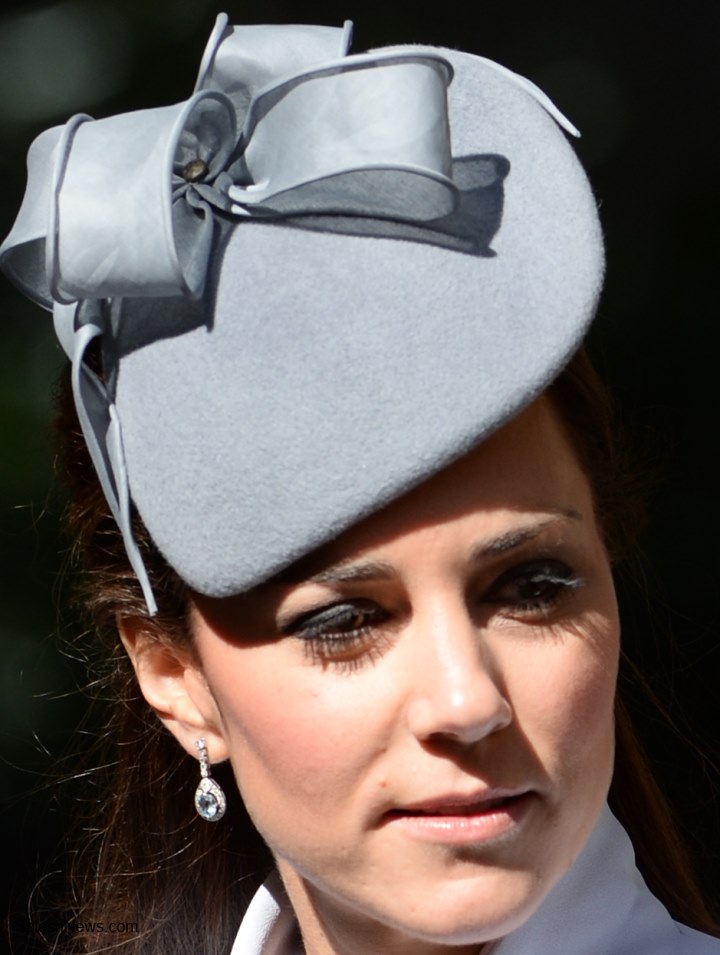 I was very interested to see the results for our very first poll about Kate's hairstyles. Once again, the Easter Sunday look is our voters' favourite. The intricate do was beautiful; Amanda Cook-Tucker outdid herself with this one. This entire look was a resounding success, perhaps because it's rather understated yet classic.

Photographer Simon Woolf captured a very special family moment during a playdate at Government House when George was leaning on his mother's shoulder. It's Kate's favourite photo of the tour and was voted as yours, too. 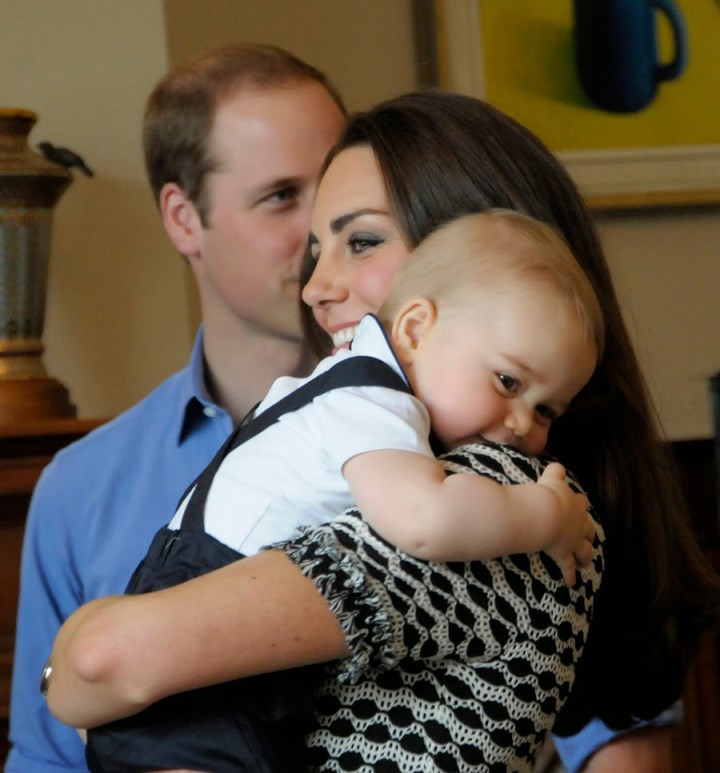 George's departure outfit in Australia really was terribly cute. The red and white stripe dungarees by Neck and Neck and the bright red cardigan: ADORABLE! 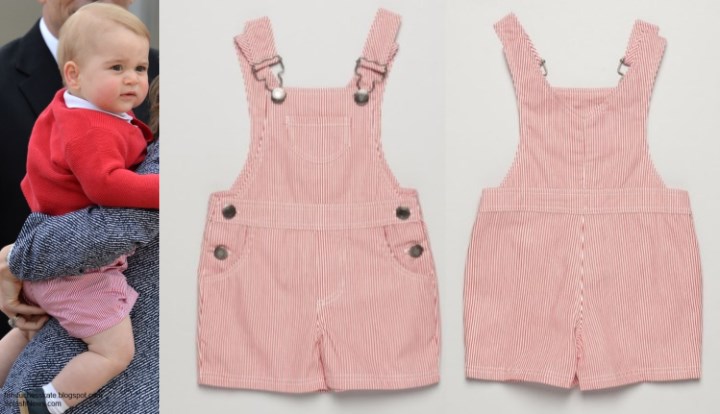 The little Prince displayed a delightful array of expressions during the tour, and it really was impossible to choose. I know I couldn't and several readers shared the same dilemma. They're all equally cute but George's pout is our winner. 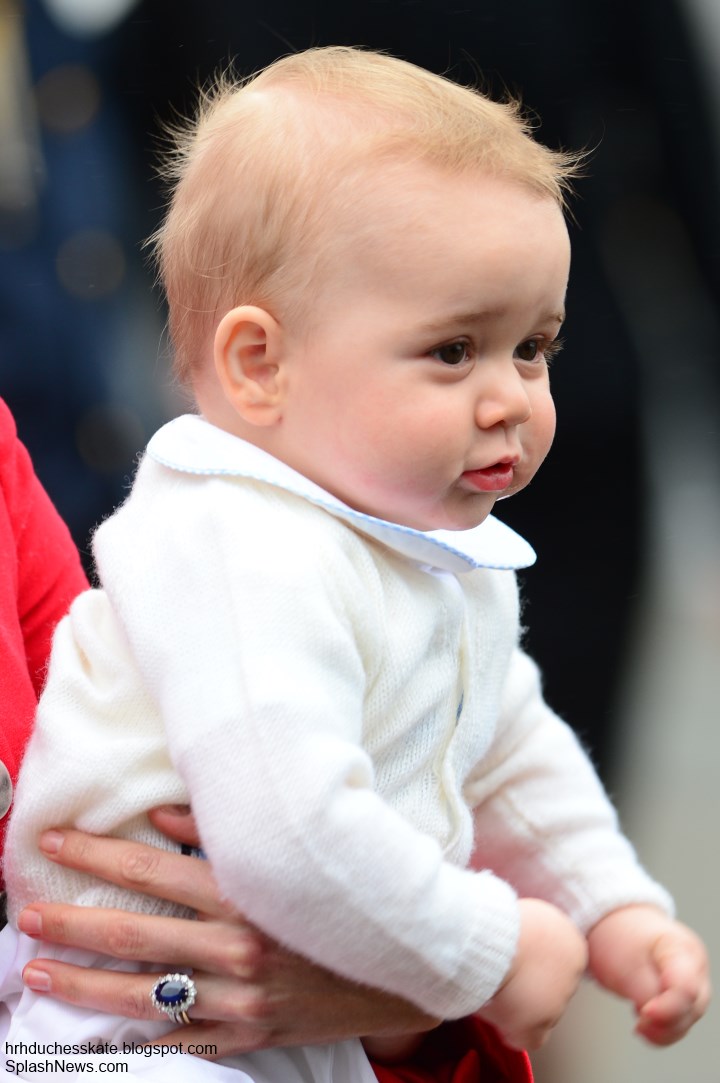 With many thanks to everyone who voted and commented. These polls have been such fun! Did your choices win? Are you surprised by any of the winners?

Moving on to royal news and updates. The Palace has finally confirmed the Cambridges' attendance at the D-Day 70th anniversary commemorations in France. More from the official royal website:

'On 6 June, The Duke and Duchess of Cambridge will meet veterans at a tea party in the town of Arromanches before attending the commemoration of the Normandy Landings at Gold Beach (Arromanches).


Our next update concerns Kate's much talked about eternity band. The wonderful Anna (who runs a splendid blog on The Countess of Wessex) successfully identified it as the Eclipse Diamond Eternity Ring by Annoushka.


It's a beautiful piece.

Finally, there's no doubt you all remember this dress... 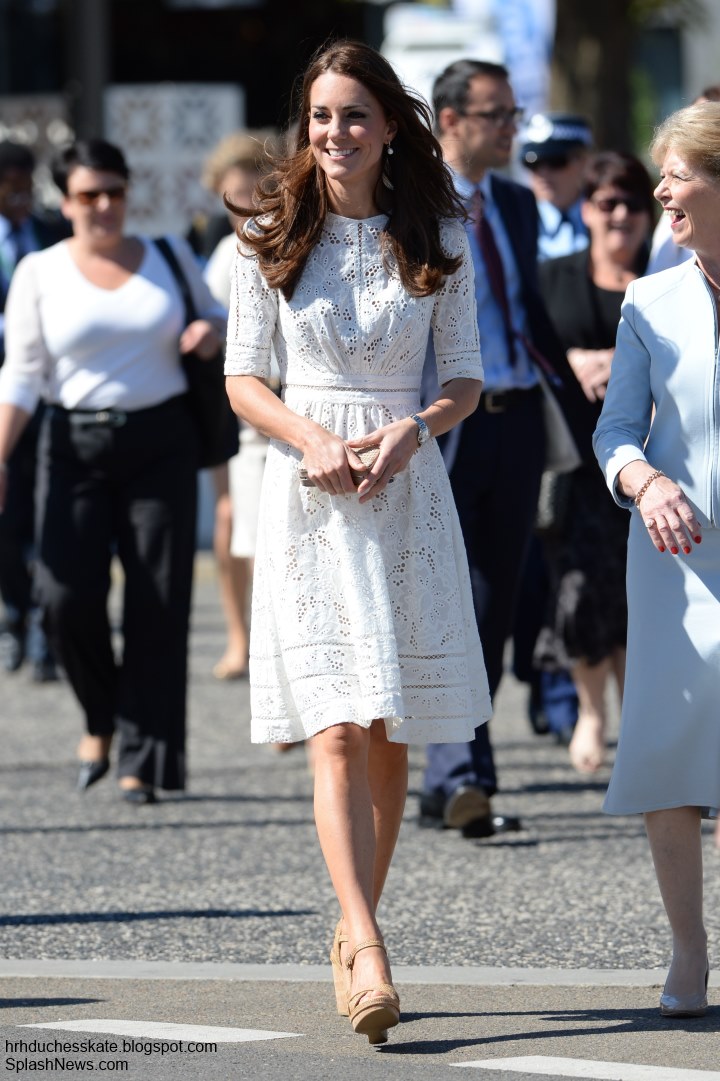 The Zimmermann Roamer Day Dress is now available for pre-order at Austique for £410. The intricate broderie anglaise eyelet detailing on the ivory cotton makes this a feminine and eye-catching piece perfect for the summer season. We expect it shall become available in stores and on other websites in the coming weeks.

We hope you all have a relaxing weekend! A surprise Kate appearance wouldn't hurt, too :)
Posted by Admin at 06:29:00