The Duke and Duchess of Cambridge spent the second day of their royal tour of Australia in the Blue Mountains. 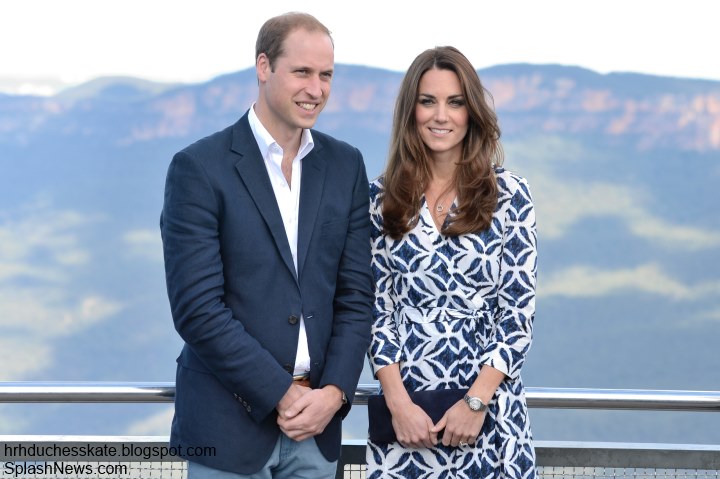 The couple travelled in an Australian Military Helicopter.


The Blue Mountains are famed for their natural beauty - a popular destination for Rock Climbers, Mountain Bikers and Hikers as well as canyoning and other adventure sports. 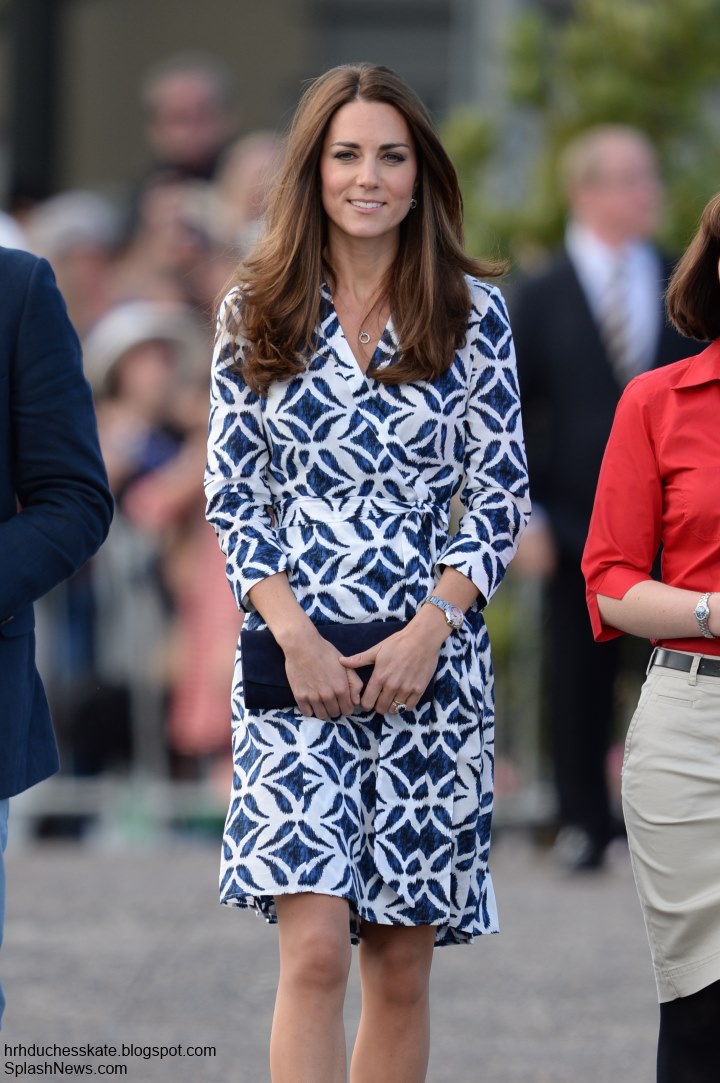 The couple received a warm welcome upon arrival.


Unfortunately the mountainous region is also known for the terrible bushfires the area has endured. In October 2013, fires in the Greater Blue Mountains Area had burnt over 65,000 hectares, much of the area lying within the Blue Mountains and Wollemi national parks. The 2013 New South Wales fires claimed two lives, and destroyed at least 248 dwellings and other buildings, with 193 properties destroyed and 109 damaged in the lower Blue Mountains area. The damage was devastating for those living in region. Following the fire Her Majesty The Queen sent her sympathies to those affected and praised the emergency services for their speedy response.


William and Kate met privately with some of the families affected by last year's bushfires. Locals requested that no live cameras be on the ground given they are still healing from the fires. Their Royal Highnesses spent ten minutes with one family who discussed their experience.


Kate spoke with volunteers from the Rural Fire Service about their experiences as first responders to the fires.


Their Royal Highnesses enjoyed luncheon with the girl guides.


The (very cute) girl guides were delighted to meet Kate.


William and Kate posed for a photo with the girl guides. Instead of saying cheese they enthusiastically said "Princess".


William and Kate participated in a tree planting ceremony: a red eucalyptus to signify all the trees that burnt down in Blue Mountains.

Kate revealed how happy she was to finally be in Australia.


The Cambridges stopped at Echo Point Lookout. Perched on the edge of the escarpment of Echo Point, it provides panoramic views of the southern Blue Mountains, Kanangra-Boyd wilderness and The Three Sisters rock formation.


The Three Sisters sandstone rock formation is one of the region's best-known tourist attractions.


The couple received a possum fur cloak for Prince George at Echo Point comprised of seven skins. He can add to it on special occasions.


Well wishers had the opportunity to see Their Royal Highnesses at the site. Details of the visit had been kept under wraps until yesterday with palace officials only offering vague details about the itinerary for the day, so those in the area were delighted to have the chance to meet the royal couple. The exact route the couple would take, however, was not disclosed. Most likely for security reasons.

There was in fact a security alert today. More from the Mail Online's story:

'Police have stopped and searched two suspects who were "acting suspiciously" and "causing a disturbance" just metres from where the Duke and Duchess were travelling during their visit to Australia's Blue Mountains. Two men were detained, one of whom was wearing a vest made of mesh, with pro-Israel stickers attached.

A witness said they were searched completely and had to take all their clothes off. A NSW police spokeswoman said, "They were stopped and searched and moved on from the area".'


Certainly it was a very minor incident, but excellent to see such a diligent and thorough response from local law enforcement.


The Blue Mountains has been a favourite royal tour destination for almost a century. The Queen and The Duke of Ednbirgh visited the Blue Mountains and Lithgow in 1954; before that The Queen's parents, then The Duke and Duchess of York visited in March 1927, and also visited Echo Point. The Duchess (later the Queen Mother) was overheard to say, "Look at those clouds! Isn't it wonderful."

There were lovely moments throughout the visit including a quote from a little girl who met Kate: "She had a really lovely voice - like she was from another country." The Duchess also said George is "cute, but very, very loud. He might scare the animals at Taronga Zoo".


Kate selected the Diane von Furstenberg Patrice Cotton Wrap Dress for today's visit. The $325 is a true wrap style in the ikat print of the season. With 3/5 length sleeves and a subtle flare skirt, it's a feminine and sophisticated piece. The dress is currently available at DVF, Matches and Harvey Nichols.


Below we see a closer look at the print.


For those who like the ikat batik print, other DVF pieces which feature it include the Jaden Printed Cotton Blouse, the Avalon Corset Top, the Amelia Printed Skirt and the Amelia Silk Combo Flared Dress.


The wrap dress works very well and nobody does it better than Diane von Furstenberg - It is very much a staple piece - perfect for daytime engagements without compromising on style. Diane created the wrap dress in 1974 - forty years ago. By 1976 she had sold over a million of them. The concept behind them was to take women from the office to a night out using fabric that was clingy but not cumbersome, it celebrated a woman's silhouette. The dress embraces diversity like no other and is favoured by women aged 20 to 70 and sizes 0 to 20. Are many of you DVF customers? I always thought the designs were a perfect fit for the professional but stylish woman.

Below we look at popular examples of the wrap dress currently available; the versatile black and white Tallulah Dress, the Julian 2 Knit Wrap Dress (currently reduced from $285 to $213), the Amelia Woven Wrap Dress, the floral Jeanne Dress and the pleated Kaley Dress. All dresses shown are available in a number of colourways at Nordstrom.


The Duchess has long been a fan of DVF and previously wore the gorgeous green silk  DVF Maja dress during a trip to Los Angeles following the Canada tour in 2011. Kate has worn a number of the designers pieces over the years. 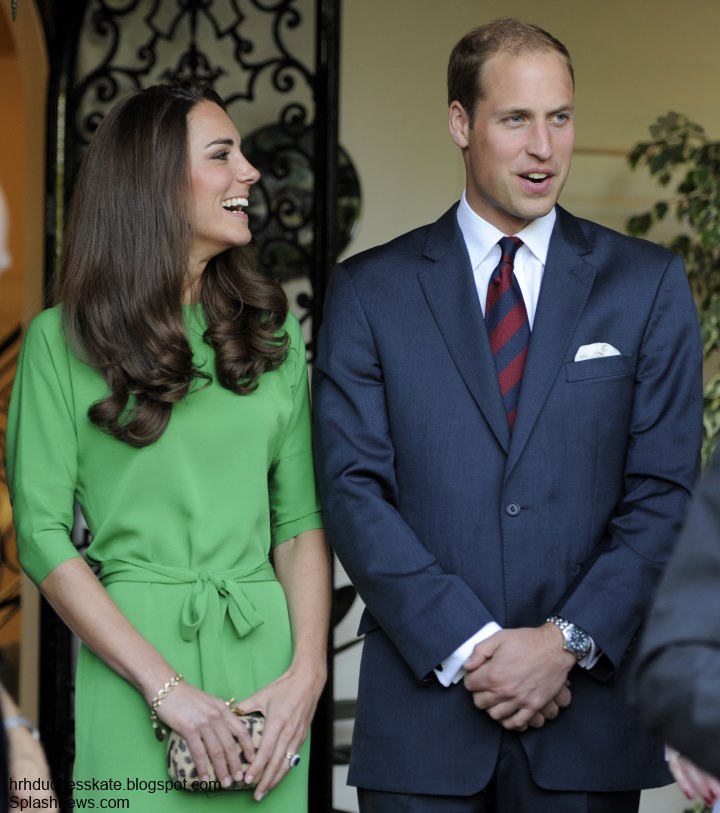 
The Duchess carried her black suede 'Muse' clutch and accessorised with her Cartier Ballon Bleu Watch. The $6000 piece is available at Saks Fifth Avenue. 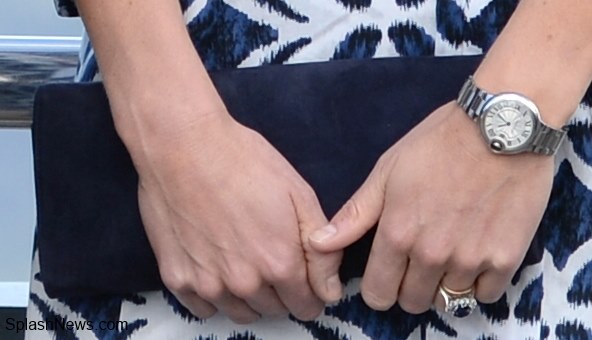 Once again, Kate wore her Mappin and Webb pendant. 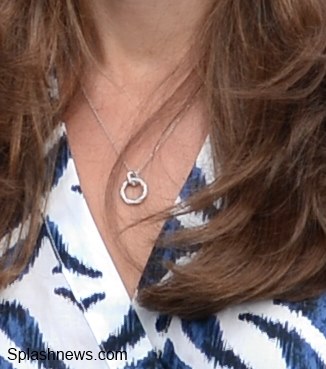 And her sapphire and diamond drop earrings.

The Duchess wore her hair in a loose side ponytail on the helicopter but took it down before arriving. It's a very pretty on Kate.


A busy day planned for Their Royal Highnesses in Sydney tomorrow:

Are you enjoying the Australian leg of the tour thus far?
Posted by Admin at 02:59:00